I am the first to admit that I am a reluctant winter fisherman, so it takes multiple days of mild weather to motivate me to make a rare outing. Fortunately, that is exactly what transpired between January 24 and 26. Three consecutive days with high temperatures in the upper fifties in Denver including the forecast of a high of 56 on Sunday, January 26, prompted my first fishing outing of the new year. My friend, Trevor (@rockymtnangler), suggested the North Fork of the St. Vrain, and I jumped on the idea. Flows were a steady 20 CFS, and the small tailwater in the foothills is lower in elevation than other options, and consequently offers higher temperatures, albeit colder than Denver.

I was extremely careful to review my checklist, since it was my first trip after an extended layoff. I departed my house in Denver by 10:15, and this enabled me to arrive at the parking area at the trailhead for the Buttonrock Preserve stretch. Tilt. Abort. I cruised the long row of pull-in parking spaces, and every opening was occupied, while several vehicles surveyed the lot ahead of me. I feared that a mild January day on a weekend might cause a mass migration of Coloradans to the outdoors, and my quick assessment of the available parking confirmed this to be the case.

I made a brief review of my options and decided to retreat to Laverne Johnson Park within the town of Lyons. Trevor mentioned this as a solid alternative, and I experienced modest success there on previous fly fishing ventures. By the time I reversed direction and returned to Lyons, I wheeled into the parking lot at 11:45AM. I paid my day use fee and returned to the car, where I hastily chomped my lunch. By noon I pulled on my waders and assembled my Orvis Access four weight and meandered to the creek. A large ridge bordered the stream on the south side of the park, so I directed my steps to the sunnier extreme western section of the oxbox loop formed by the St. Vrain in this area. I stopped on the top of the bank and surveyed the gorgeous long pool and run in front of me and decided to make it my starting point for 2020.

I pulled a new and untried Amy’s ant with a peacock body from my box and knotted it to my line. Next I added a beadhead hares ear on a two foot dropper, and then I extended another six inches and added a size 12 prince nymph. I cautiously approached the tail of the pool and prospected to the very top without any action or signs of fish. As this scenario unfolded, a couple arrived and perched on the rocks at the top of the pool, and then in an act of bravery the young man removed his shoes and socks and waded to the opposite bank to pose for a photo. He did not wade through the area I intended to fish, but his silhouette may have startled any potential hungry fish in the area. 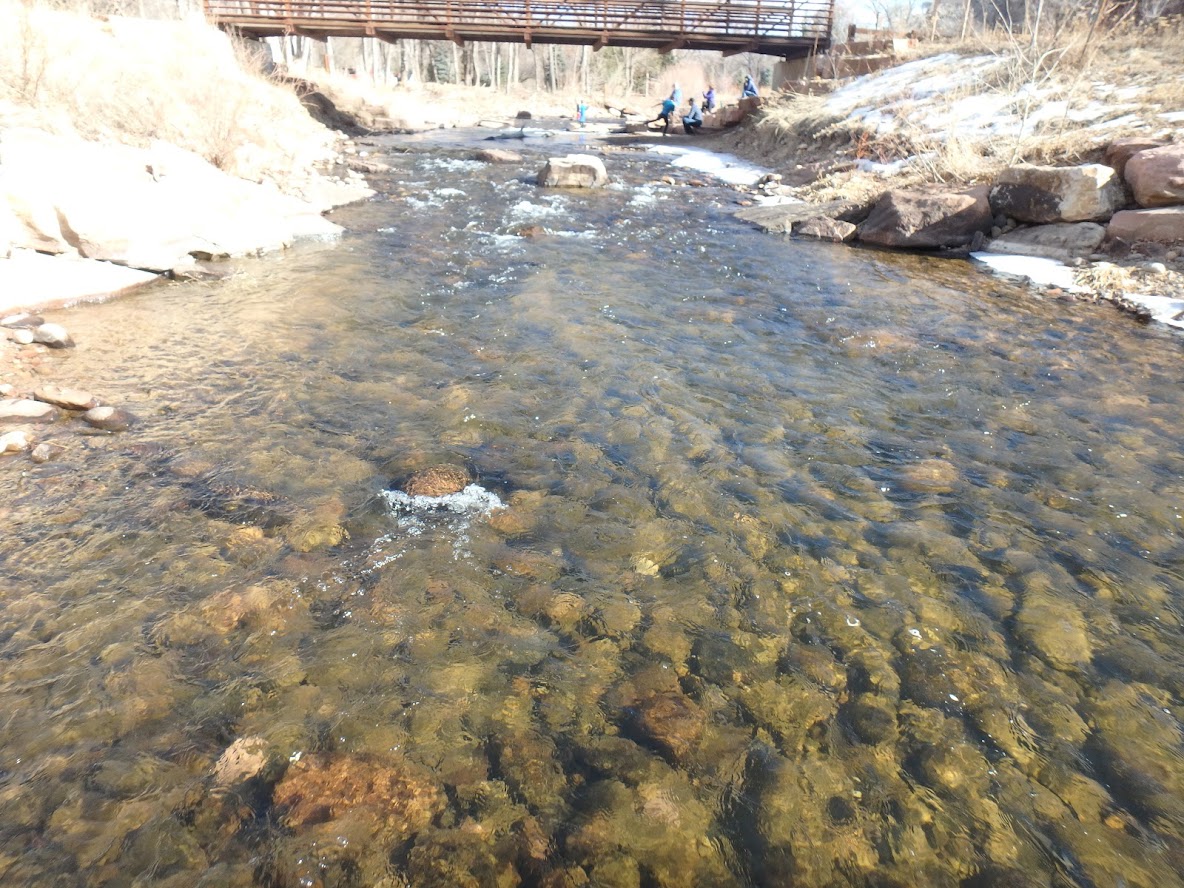 Throughout my time on the water I competed with similar non-fishing park users, and this forced me to circle around quite a few prime locations. The most frequent obstacles were families with small children, who could not resist the urge to toss or skip stones in the small stream. I could not be upset with these families enjoying the outdoors, but I am fairly certain that I could have caught a few more fish if they were not present. 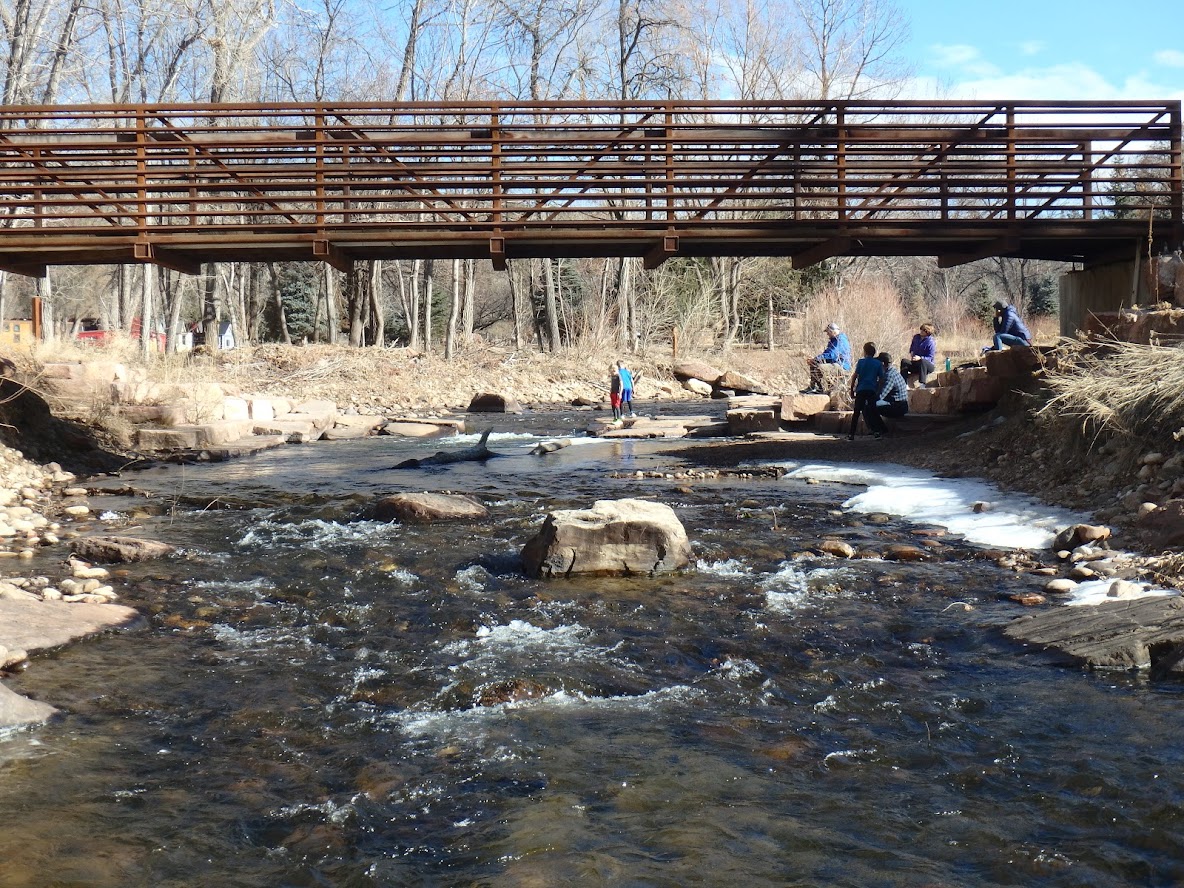 Kids Throwing Stones Was the Theme

After an hour of fruitless wading and casting I approached the pedestrian footbridge that spans the creek just below the Riverbend wedding venue that hosted my son and daughter-in-law in 2018. Another army of boys pelted the creek in this area, so I pulled back and crossed the park to the southern border. I spotted another fisherman downstream near the campground, so I cut to the water midway between him and the ice hockey rink. The Amy’s ant was low in the water and difficult to follow in the shadows created by the high ridge, so I swapped it for a bright yellow fat Albert. I used this change out as an opportunity to reconfigure the nymphs as well, and I replaced the hares ear with a size 12 Pat’s rubber leg and then added an orange scud as the point fly. The rubber leg and scud were both products of my recent winter production tying, so I was anxious to test them. 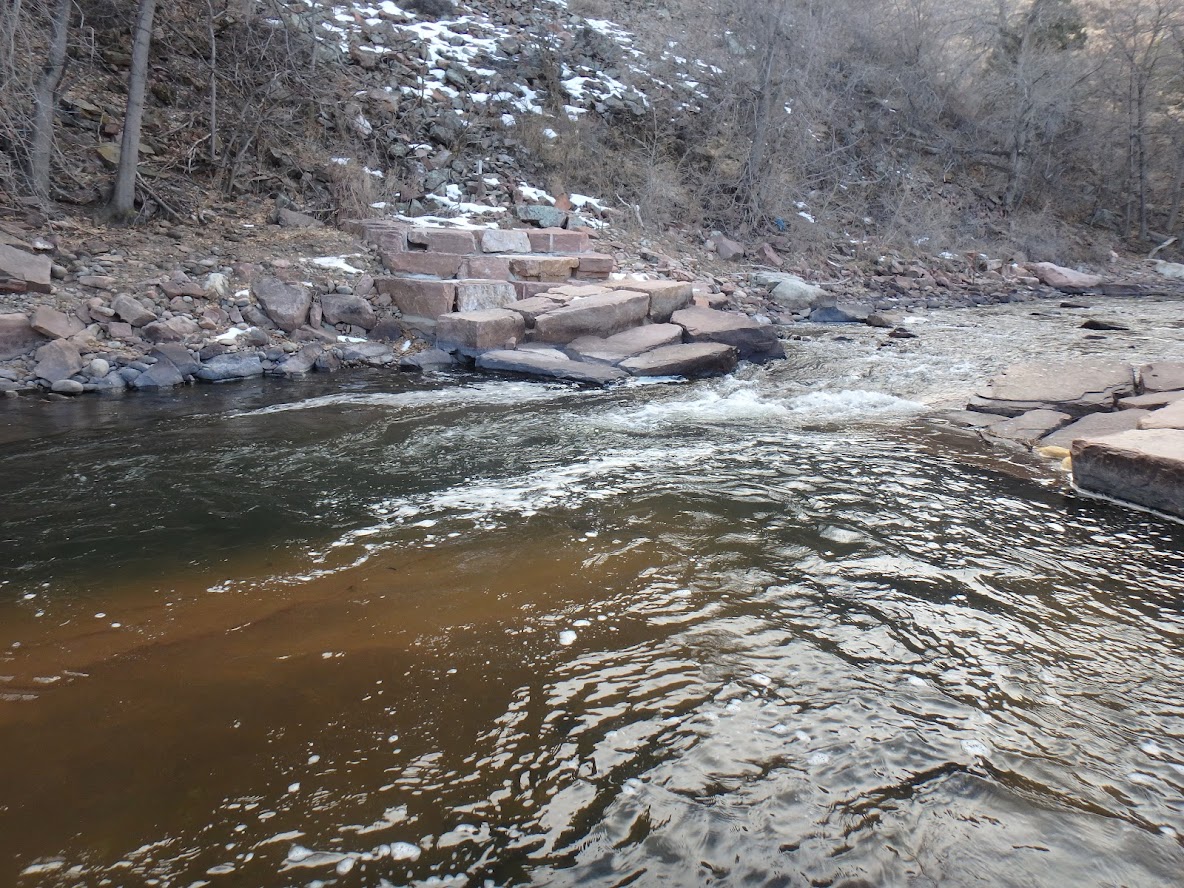 I worked my way to the top of the gorgeous pool created by man-made rock structures, and despite the appealing nature of the water in front of me, the fish counter remained locked on zero. I positioned myself on one of the flat rocks that were part of a wing that forced the creek through a narrow chute, and I began to drop casts in the drop off and allowed the flies to drift along the near current seam. On the fifth such pass the fat Albert darted sideways, and I reacted with a hook set and found myself attached to a significant opponent. Early in the struggle I determined that the fighter was a rainbow trout, and after several bursts up and down the pool, I netted a sixteen inch beauty. What a way to begin the year! I commemorated the event with a couple photos and a video, and then I plunged my hands in the frigid flows and wiggled the Pat’s rubber leg free and released my prize. A new fly produced, and I began the year with a sixteen inch fish. My day was complete regardless of what transpired during my remaining time. 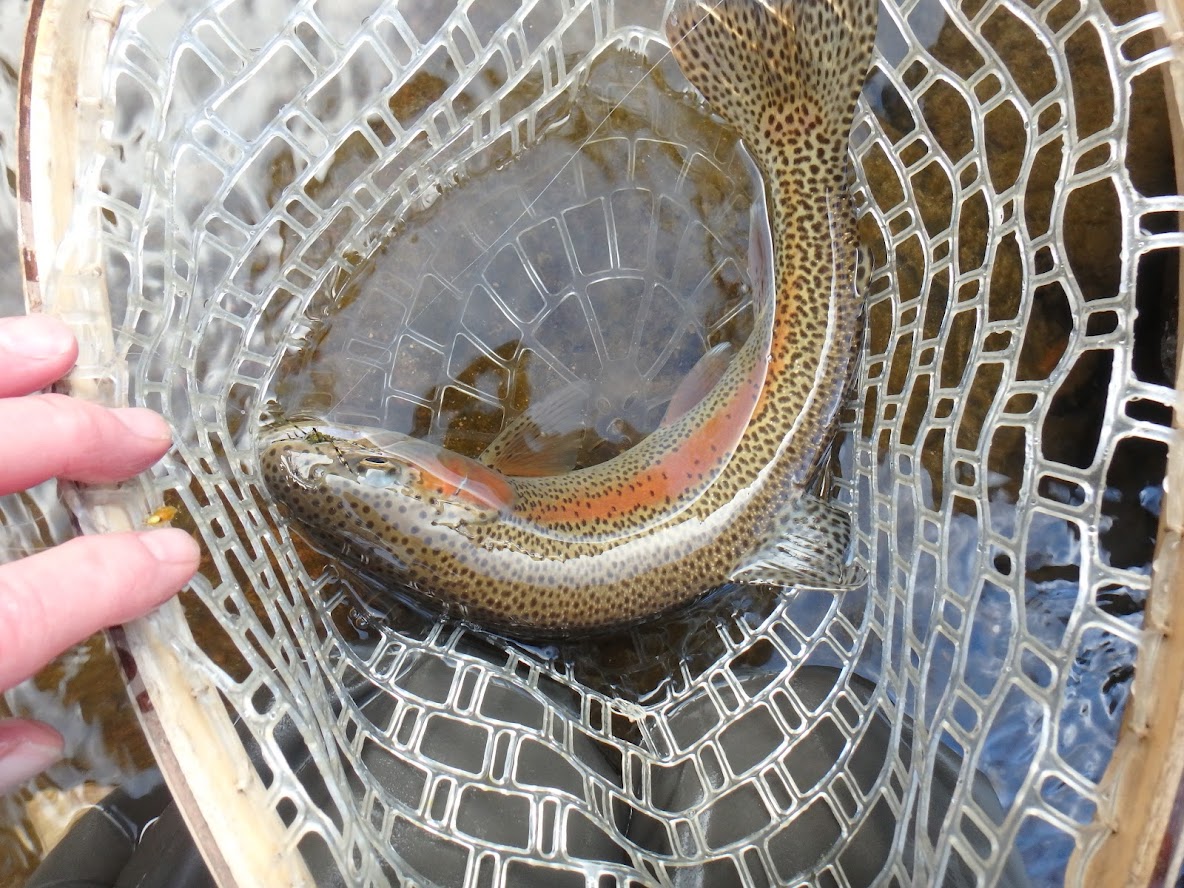 I dried my hand on a blue towel, that I stuffed in my front wader bib pocket, and I resumed casting to the pool next to me. A similar deep run along the center current seam existed on the opposite side of the stream, so I began to toss the dry/dropper setup next to a protruding in-stream rock and allowed the current to pull the flies through the eddy and along the deep border with the faster current. On the fourth cycle, the fat Albert plunged six inches below the surface. I was uncertain whether this resulted from a fish or some conflicting currents, but I lifted just in case. Once again I felt the throb of a live fish, and after a short battle I landed a thirteen inch rainbow. I was once again pleased to discover the Pat’s rubber leg in the corner of the mouth of this silvery catch. 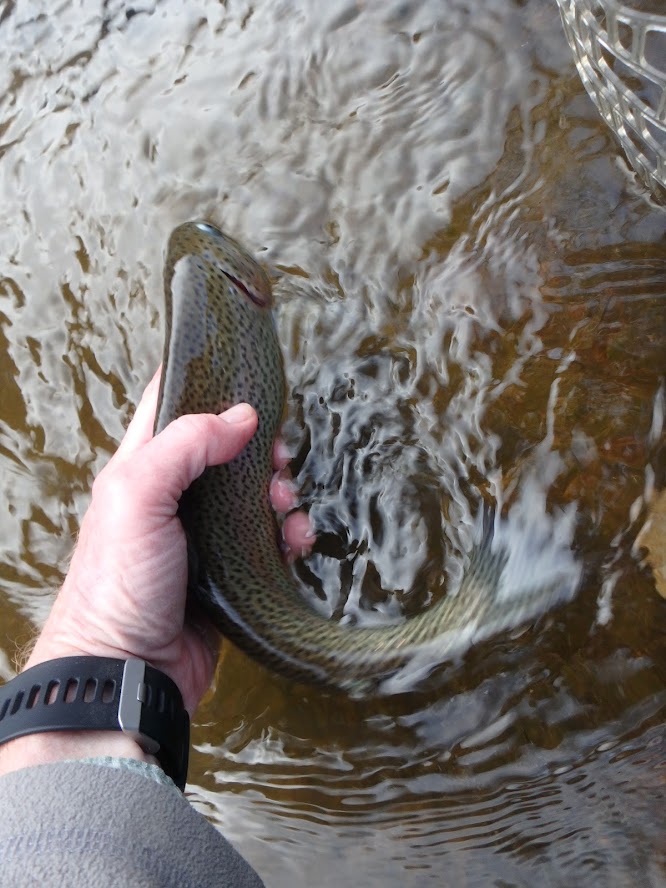 My optimism elevated, as I continued my upstream progression along the southern section and then curled around the curve on the western end, where I launched my day, but I was unable to generate additional interest from the resident trout. I switched out the scud for a size 20 salad spinner midge emerger, but the move failed to improve my fortunes. In fairness to myself, quite a few couples and families rested along the stream, and of course this prompted stick throwing, dogs swimming and pebble tossing. The scene was less than ideal for stealthy approaches in the low clear water conditions. 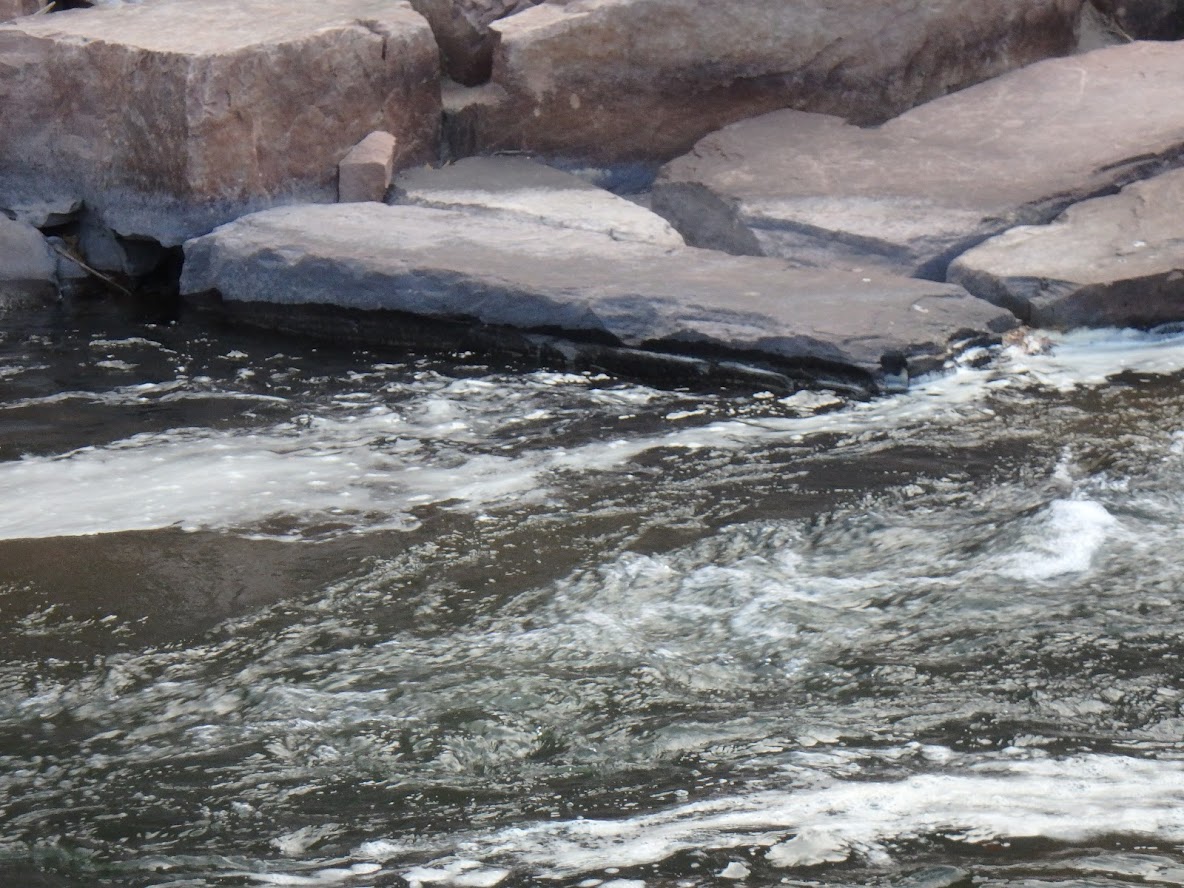 Number Two Came from the Nook Next to the Rock

Eventually I approached the large pool above the pedestrian bridge, and I spotted a young fisherman on the large rock stream improvement wing. I hooked my flies in the rod guide and asked the angler whether he could see fish, and he replied that he could, and quite a few rises were visible, until a dog disturbed the pool. I watched him and chatted for twenty minutes, and I learned that his name was Denver, and his handle on Instagram is @denverhoughton, and we follow each other. It was fun to meet an Instagam follower face to face.

Denver recommended the pool next to the campground, so I said goodbye to him, as I ambled across the park to the suggested location. Sure enough I found another huge man-made pool, and I began working my dry/dropper through the wide shelf pool along the right side. I failed to generate interest, so I slowly moved out on the stream improvement wing at the very top of the pool. I paused to observe and spotted two small trout and one larger one facing into the back eddy. I attempted an abundant quantity of drifts through the eddy and along the deep current seams, but I was unable to generate a take. On one drift along the center run I saw a decent fish move toward the droppers, as they began to swing. After fifteen minutes of futility I noticed a couple sporadic rises, so I switched to a single CDC blue winged olive, but the visible fish exhibited no interest. In a last ditch effort to dupe the pool dwellers I exchanged the CDC BWO for a size 18 parachute ant, and the larger of the trio facing the back eddy eyed it and moved a few inches, but that was the extent of the interest. With the shadows lengthening and the temperature cooling, I called it quits and returned to the Santa Fe.

Two trout in three hours of fishing is a low catch rate, but I was more than pleased with these results given the distractions and disturbances at the park. Netting a sixteen and thirteen inch fish on my first outing was assuredly icing on the cake. I will resume my fly tying regimen and patiently wait for another string of mild weather, when I can further test some of the new patterns that I tied in the off season.