Wednesday presented another hot day with temperatures in the mid-eighties by the afternoon. I decided to explore the Middle Fork of the Elk River, since it was very close to the campground, and it represented a stream that I never touched previously. I love exploring new water, and the prospect of experiencing a new high country creek had me excited. As I began strolling along the road through the campground, I realized that I forgot my standard supply of chap stick and eye drops, so I quickly reversed direction and returned to the car to secure those two items. I was now prepared for an enjoyable day of fly fishing on the Middle Fork, and I hustled to the end loop and found the path that led to the confluence of the Middle Fork and North Fork. As I passed one of the last campsites in the loop, a young man, trying to be helpful, shouted out that there was a path to where the two forks met (I already knew this, but I let him think he was assisting me). He also offered, that I was likely to catch a bunch of brookies. I was hoping for cutthroats, but since I never fished the creek before, I could not dispute his projection. I arrived at the sought after confluence and began to select flies for my start, and at this point I realized that I left my MFC fly box, that contained my core supply of dry flies, in the bib pocket of my waders. I pondered the idea of continuing without my dries, but I quickly rejected this foolhardy concept. I climbed the hill on the faint trail and repeated the entire circuit back to the campsite to retrieve my essential fly box. I had the presence of mind to shed my wading staff, fly rod, front pack and backpack; and at least lightened my burden for the repeat hike. 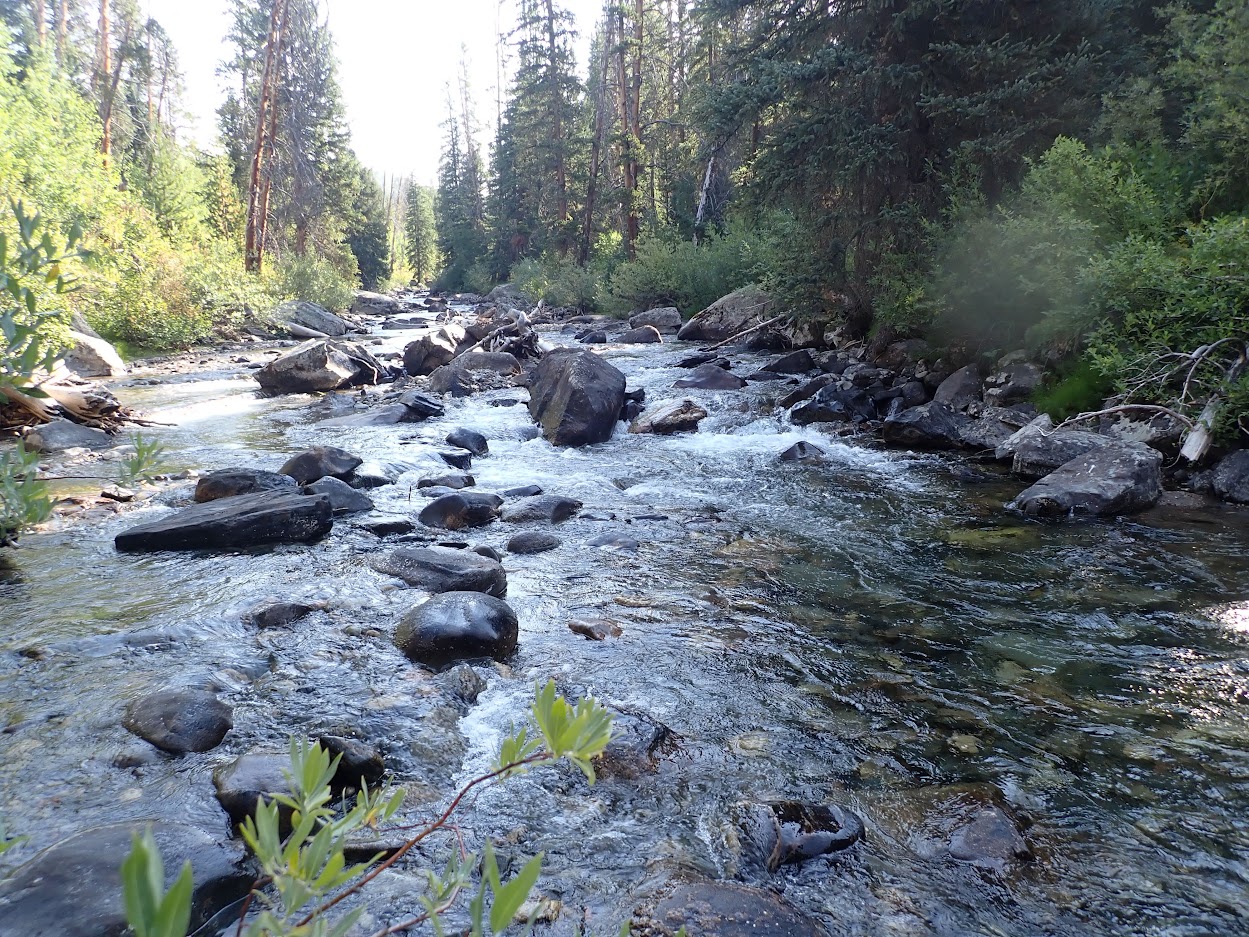 Partial Shadows at the Start 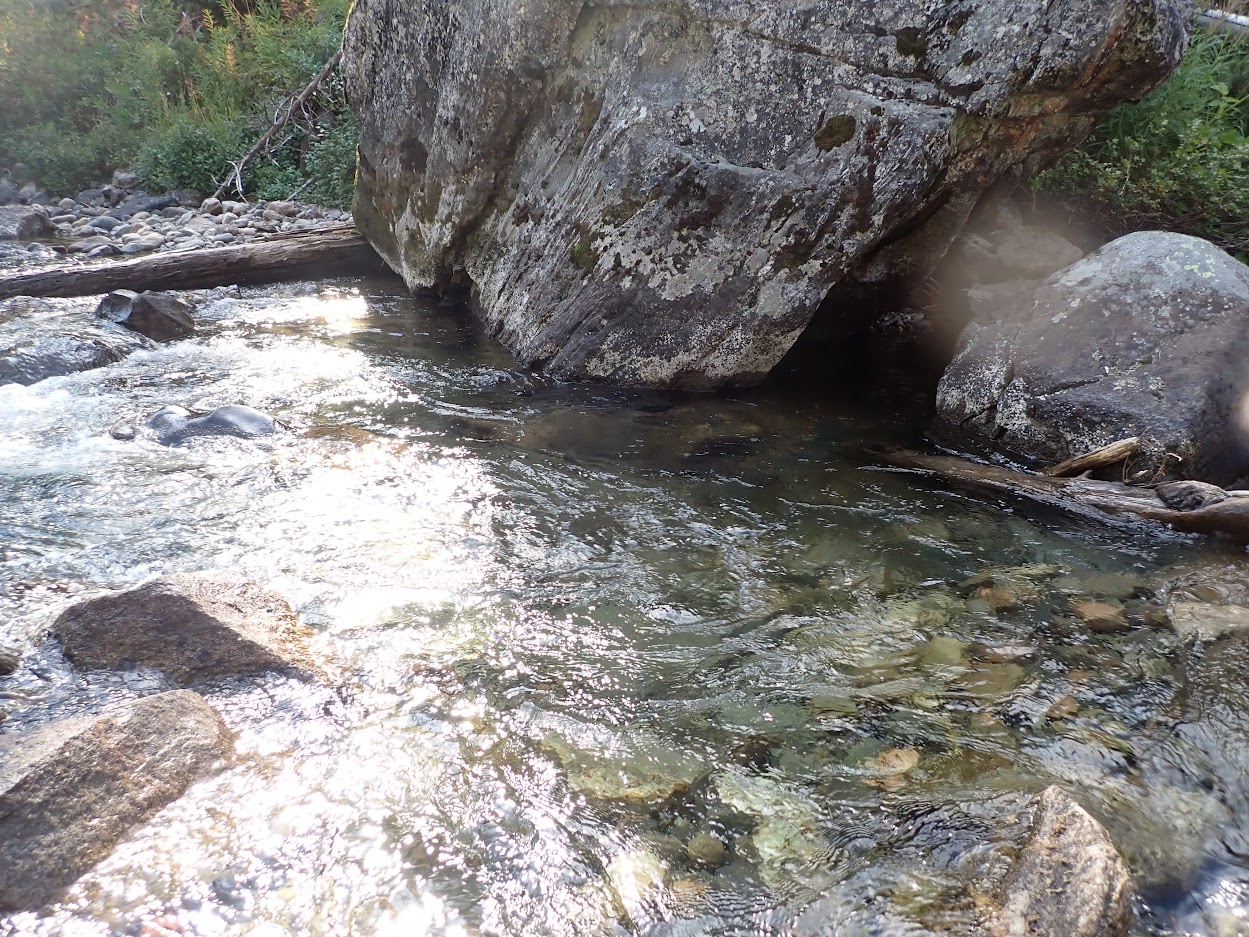 Depth Next to Rocks Tantalizing

The fish encounter elevated my optimism and confidence in the dry/dropper approach, so I replaced the full set of flies with no changes. My confidence was misplaced, and I suffered an extended lull, until I abandoned the nymphs and pool toy and resorted to a peacock hippie stomper. The stomper delivered positive results, and I notched three small brown trout and a brook trout by 11AM. Although catching fish was better than fruitless casting, I sensed that I was passing through trout holding locations with no action, so I repeated my newly applied summer of 2020 strategy and adopted a double dry fly configuration. I added a size 14 olive stimulator on an eight inch leader, and instantly my fortunes improved. By the time I grabbed lunch on a small gravel beach, the fish count rose to eight.The morning was not characterized by intense action, but the catch rate exceeded two per hour. 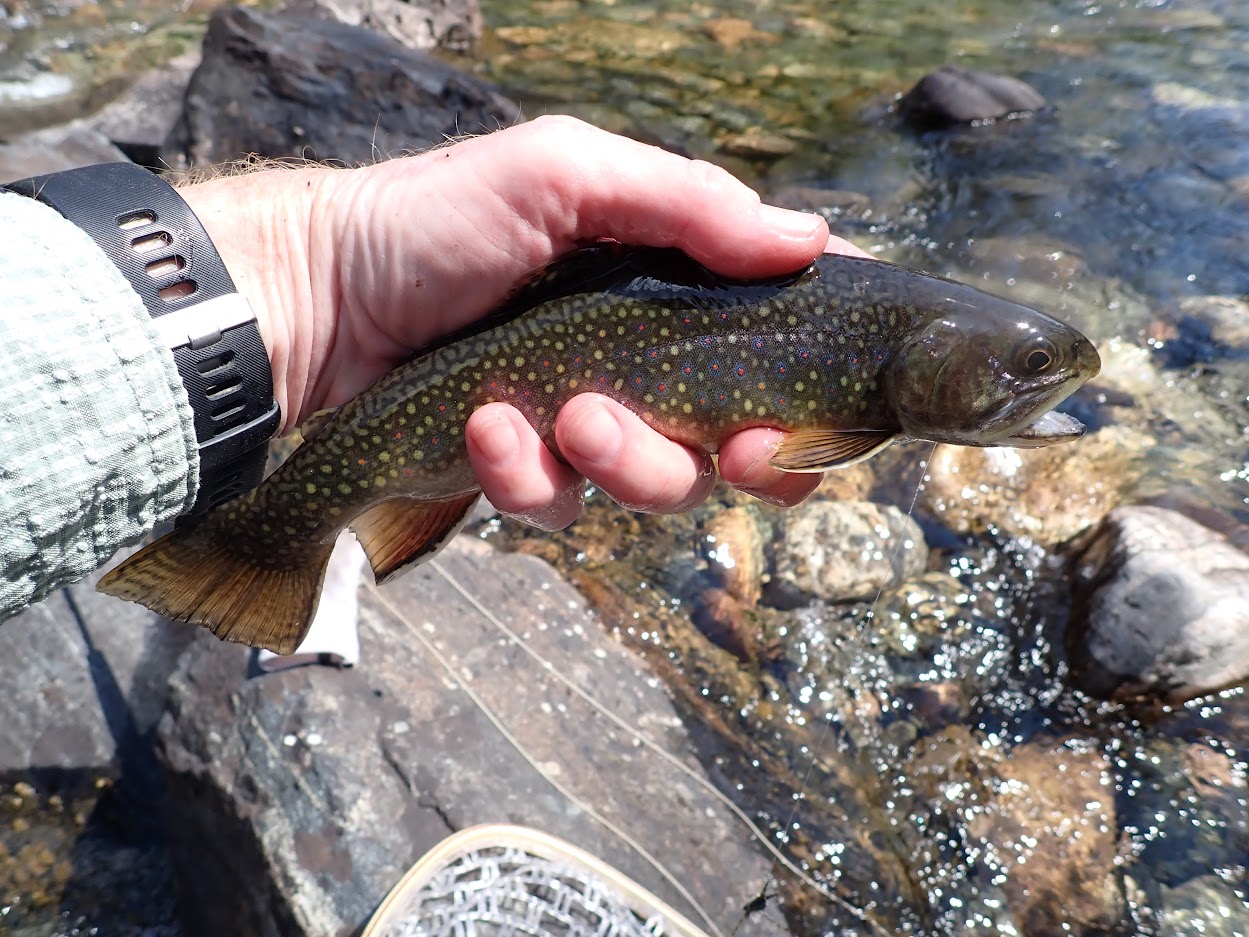 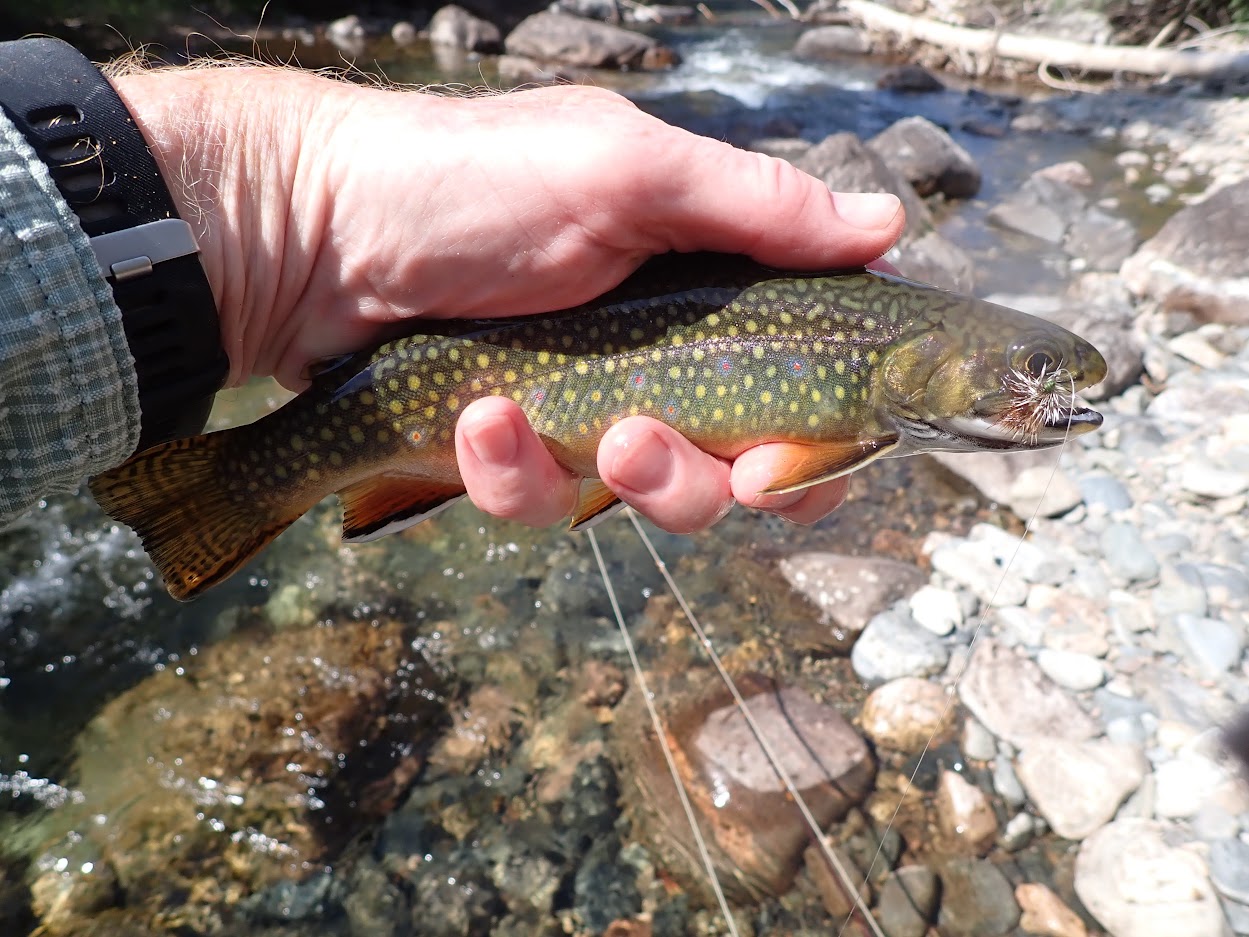 The two hours after lunch developed into the best fly fishing of the day. For most of the time I tossed the peacock hippie stomper and olive stimulator, and the heavily hackled impostor did the heavy lifting. At one point a high errant backcast hooked an out of reach limb, and this resulted in a two fly break off. The peacock stomper was merely serving the role of indicator, so I deviated from tradition and replaced it with a silver bodied version, but I maintained the olive stimmy as the end fly. The silver bodied hippie stomper contributed a few fish to earn future consideration in the role of surface fly. 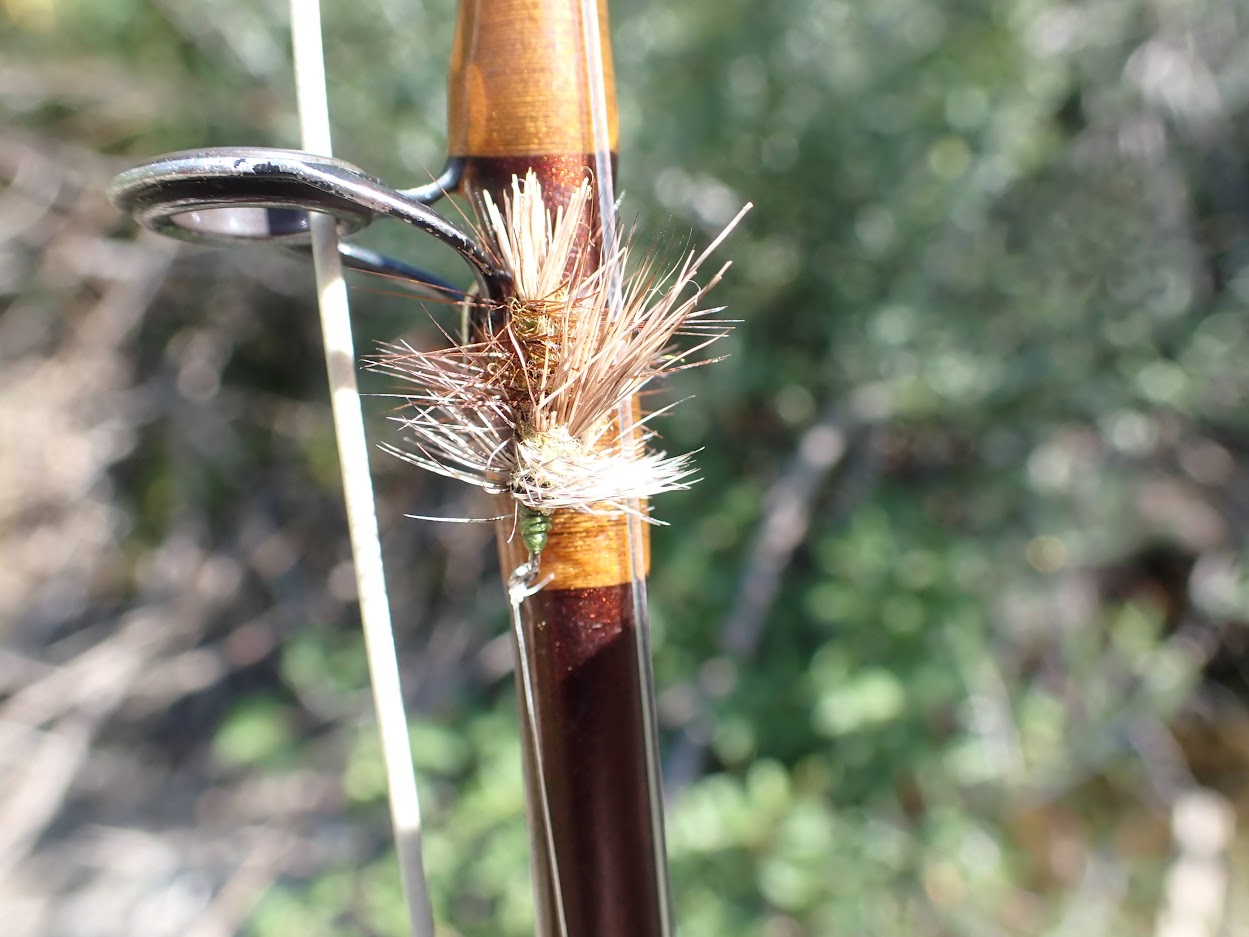 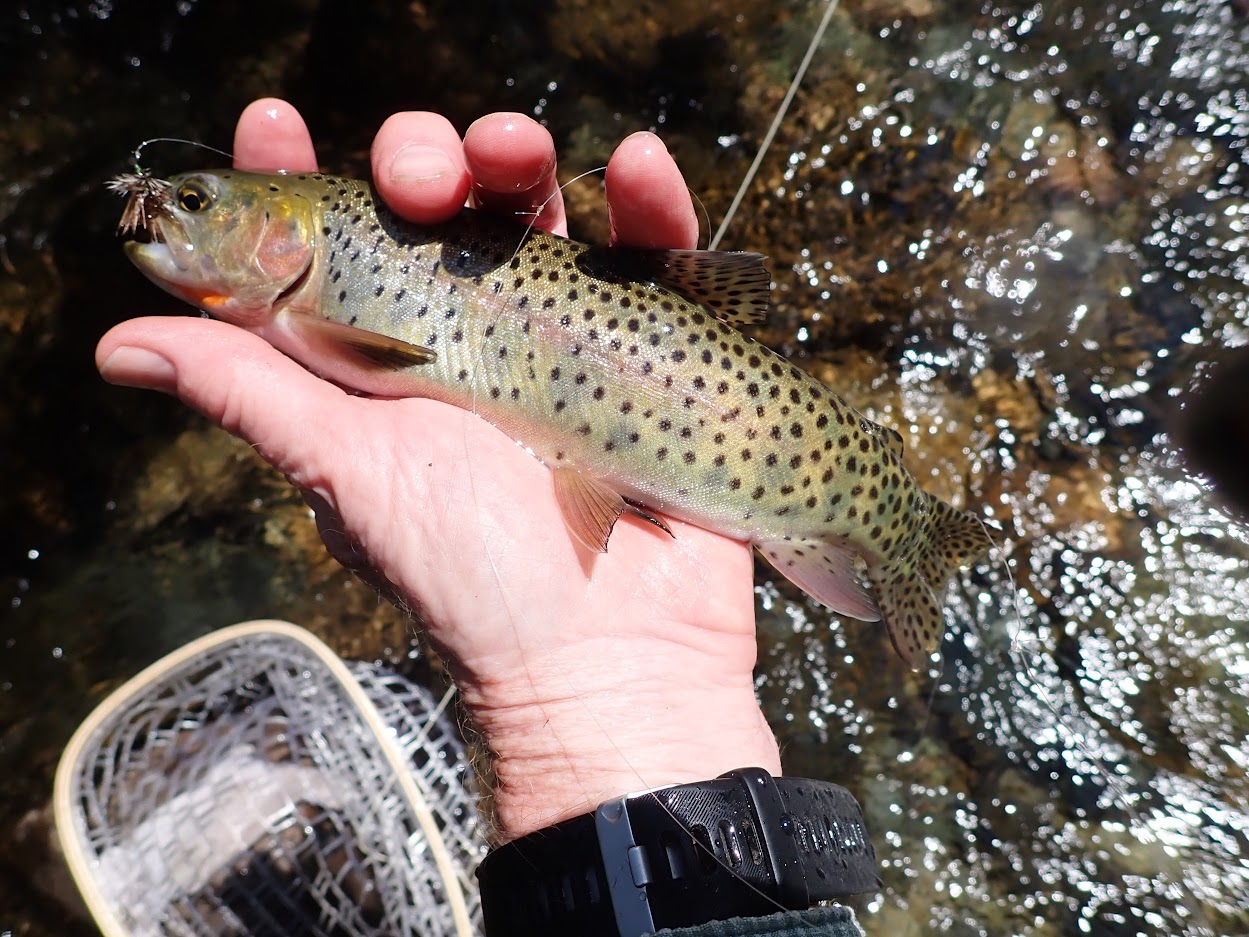 The fish count rested on twenty-one when I reached the area behind the group campground. The nature of the creek altered at this point and transformed from a canyon with deep runs and pockets to a more gentle waterway with alternating pools and riffles. The changed stream structure was easier to wade, but paled in comparison to the canyon area from a fish productivity perspective. In the final hour I continued from the group camping access to the South Fork Bridge and only incremented the fish counter by two to twenty-three. 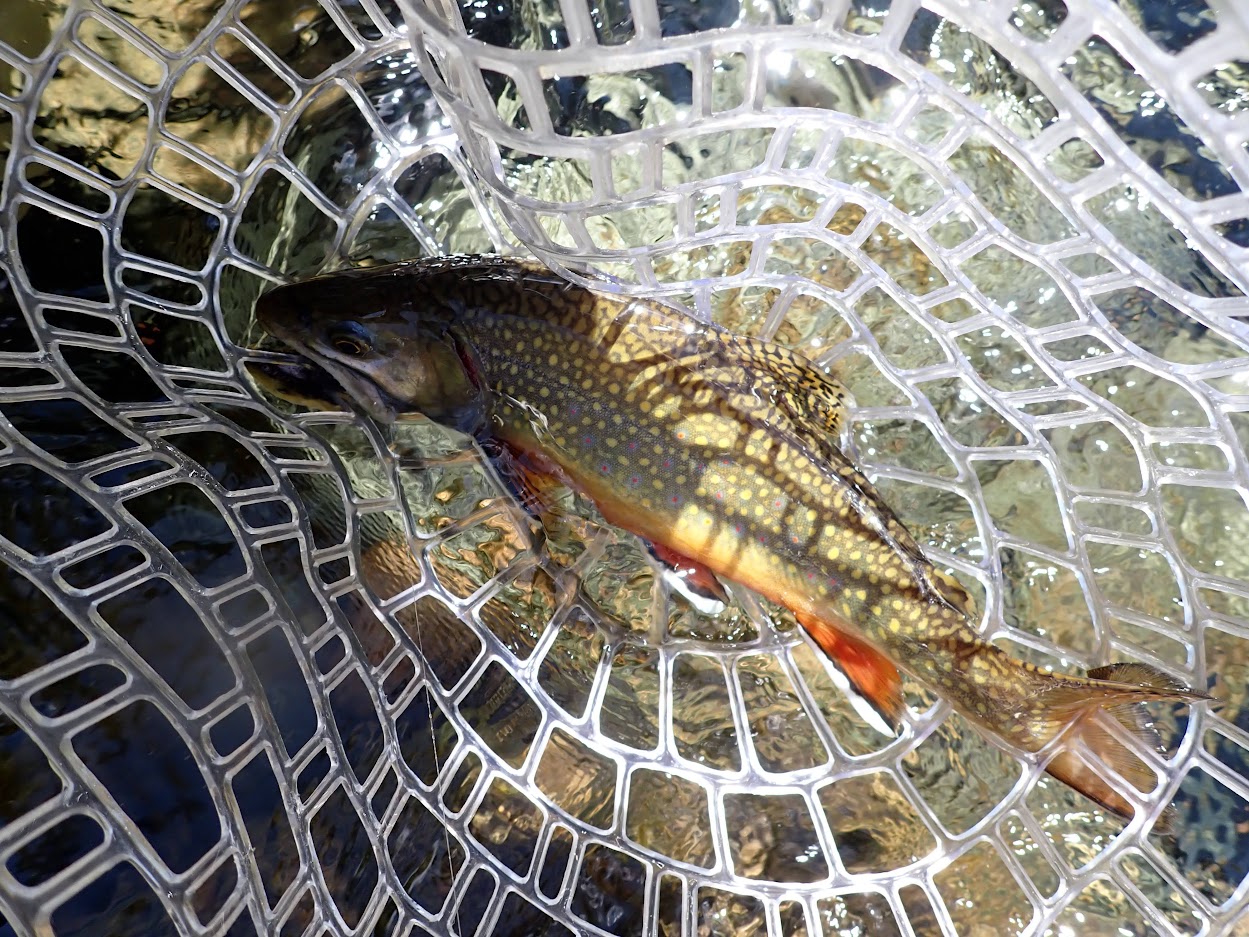 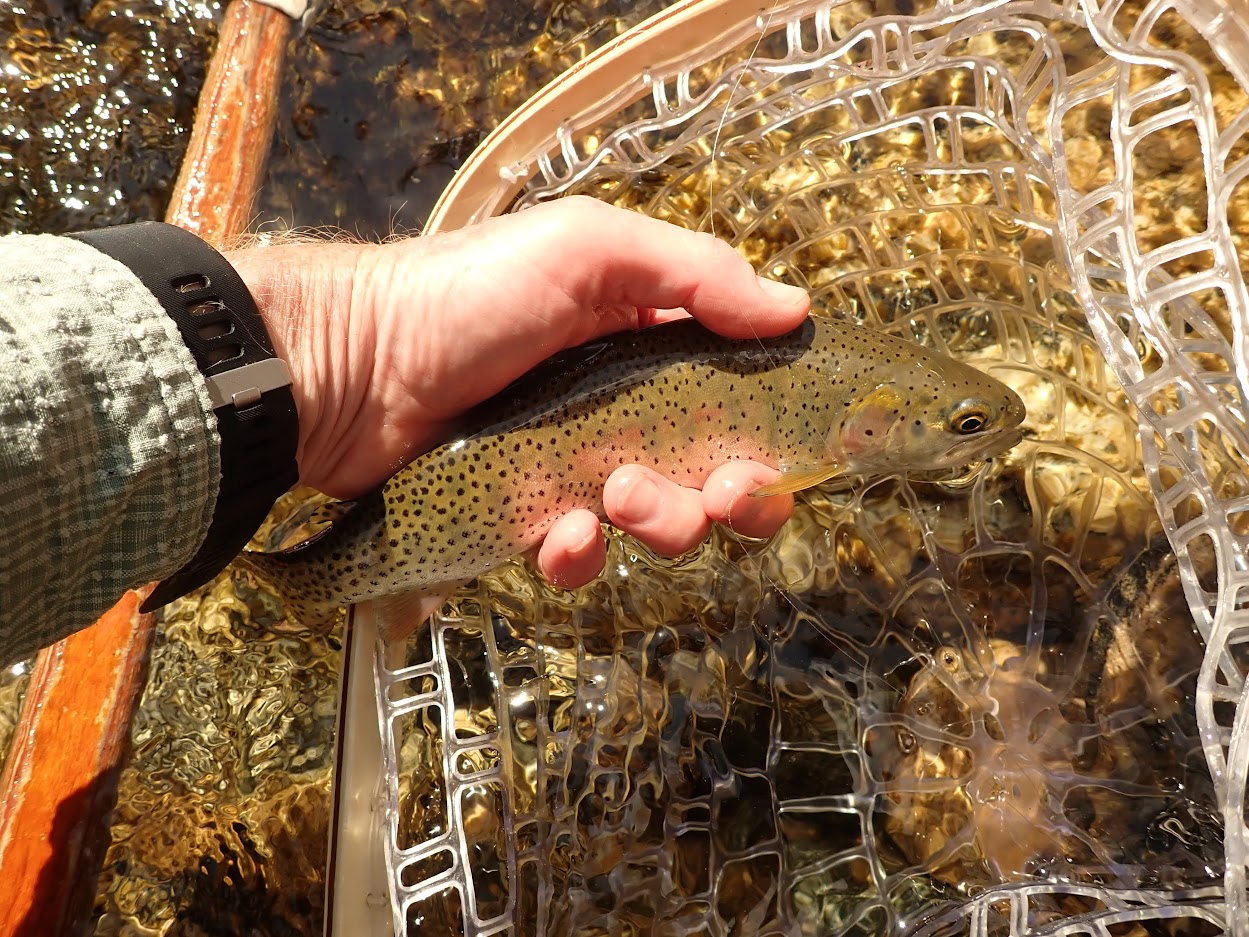 The last fish, however, was notable; as a gorgeous twelve inch cutthroat elevated to confidently inhale the stimulator. This bit of positive interaction took place in a spectacular bend pool. A short time after landing the cutthroat, I slung a long cast to a deeper run along a large bank side rock. The two flies bobbed along, when a splashy rise appeared next to the rock. I executed a swift hook set and felt weight, and an orange-bellied brook trout flipped over and tossed aside the fly. My fleeting contact with potential fish number twenty-four was the last action of the day. 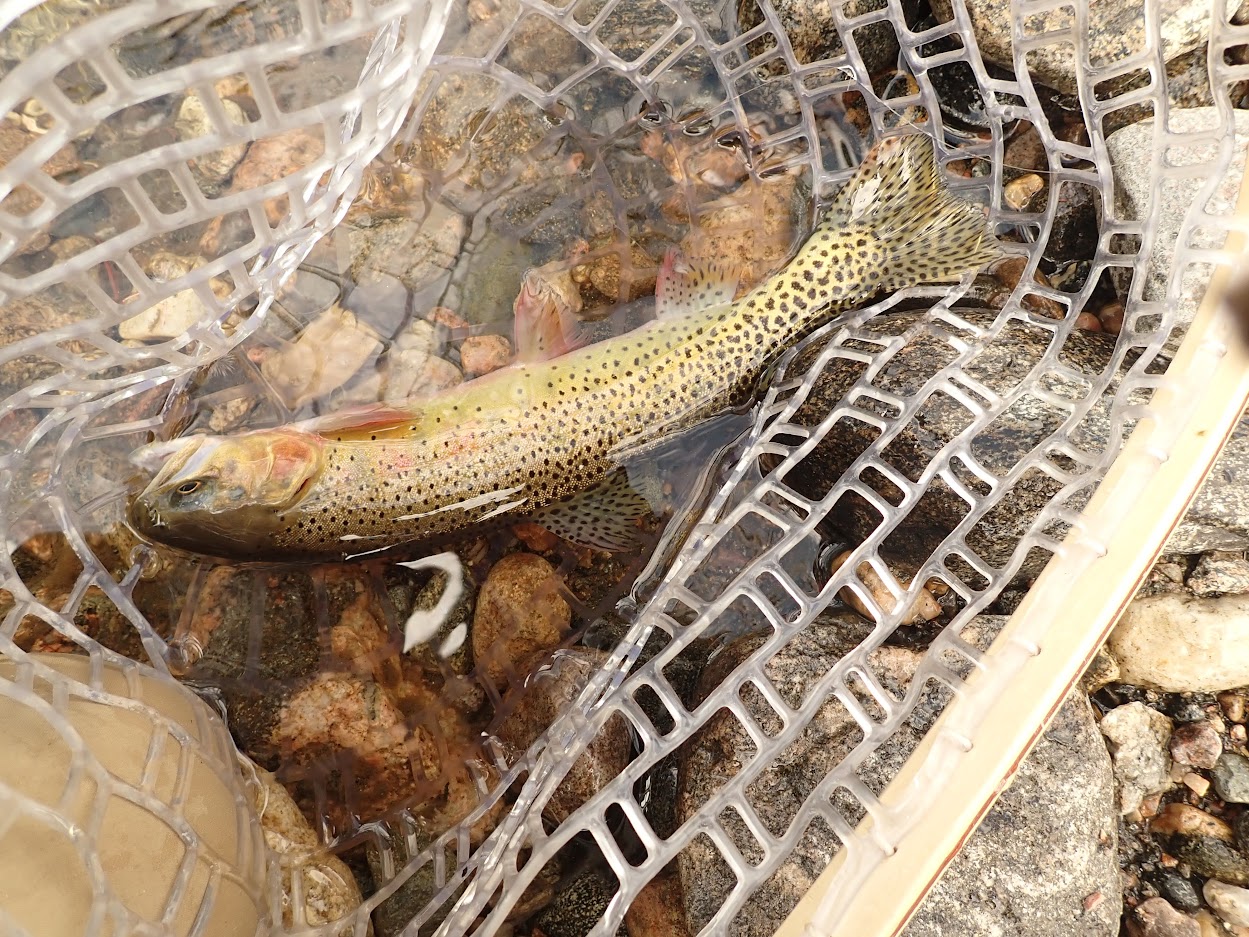 I exited at the South Fork Road Bridge and clocked my return hike on my Garmin. The smart watch revealed that I covered 1.2 stream miles on Wednesday, August 19. Twenty-three fish represented a fine day in mid-August in spite of above average temperatures. Seventeen landed fish were brook trout, three were small brown trout, and three were highly prized cutthroats. Wednesday reinforced the need to get away from easily accessed locations. My most productive time occurred, when I was in the middle of the canyon away from the campgrounds and trails. Climbing over fallen trees and large slippery rocks paid dividends. 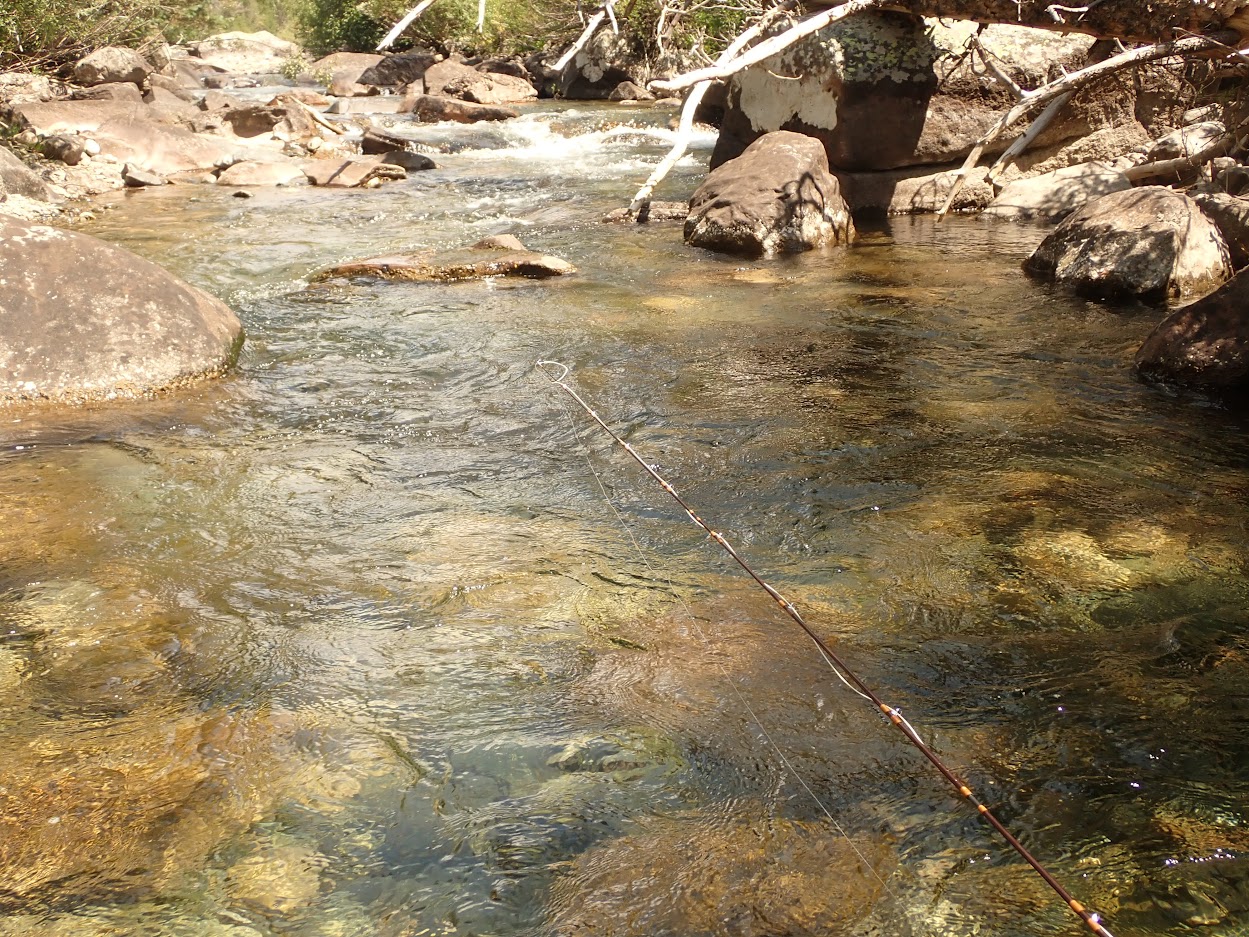