July in Colorado is green drake time, and on an annual basis I travel around the state attempting to meet my favorite hatch. After a couple nice outings on the Cache la Poudre River, when the trout responded to my green drake patterns, I researched other destinations that might offer me an opportunity to visit this western mayfly emergence. I read my various books that cover the rivers and streams of Colorado, and anxiously reviewed the hatch charts. I quickly determined that the best green drake hatches in July were along the western slope, and I narrowed the possibilities to the Taylor River and Roaring Fork River. The Roaring Fork event is an evening affair, and I preferred daytime, so I gathered my fishing and camping gear and made the drive to the Taylor River.

Before departing I studied the campsites in the destination area, and I quickly learned that all the sites that could be reserved were taken for Monday and Tuesday night. Fortunately I counted one hundred first come, first serve sites in the vicinity, so I decided to gamble that by arriving at 3PM on Monday, I could snag a walk up site after campers departed following the weekend. On my trip to the area I drove over Cottonwood Pass, which was under construction for the last two years. The main improvement was the paving of the west side of the pass, and this bit of road construction shaved thirty minutes off the trip. Despite the paving project the views from Cottonwood Pass remain breathtaking. 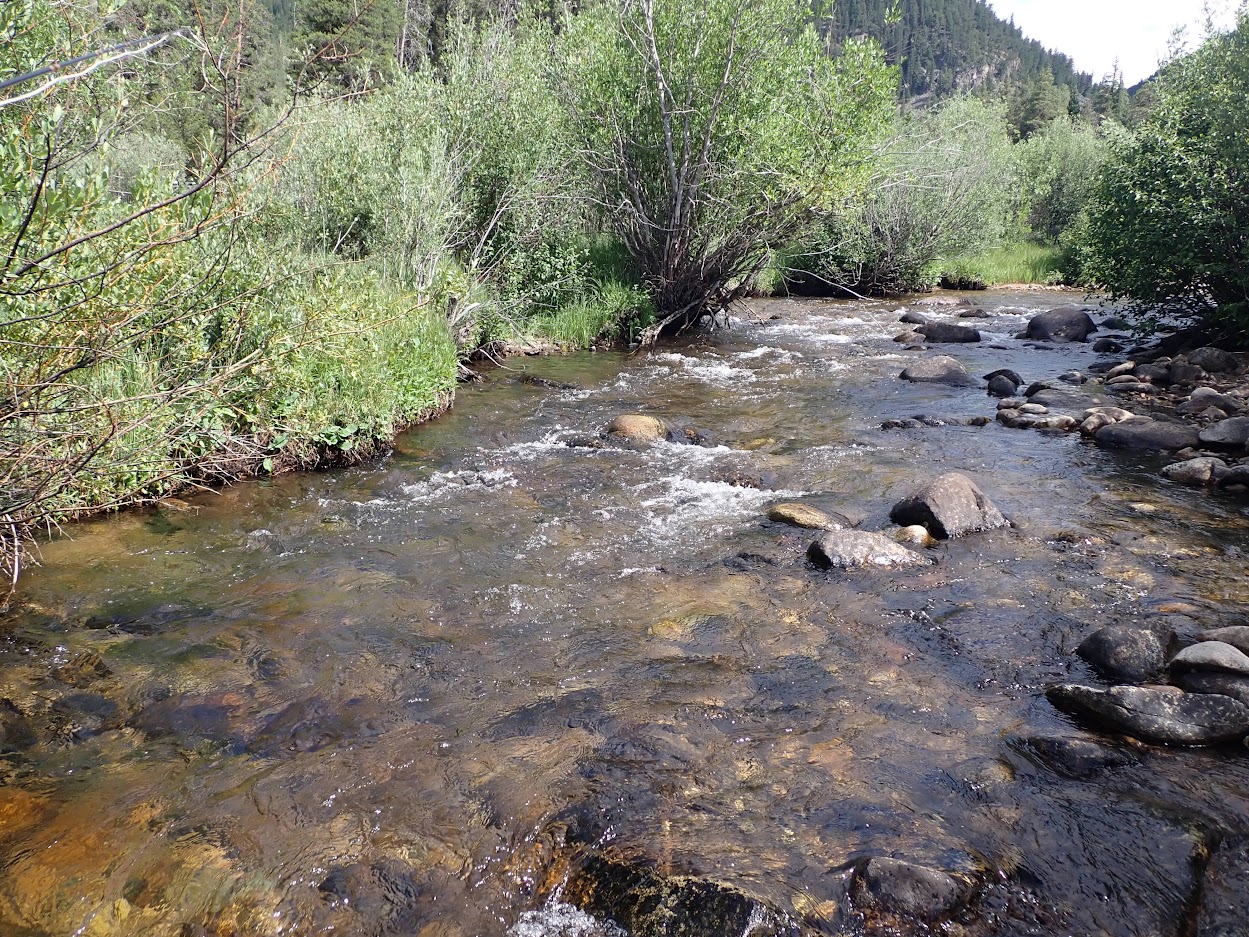 Once I landed on the western side of the divide, I circled Taylor Reservoir and stopped at Lakeview Campground across from the marina. The national forest web site indicated that ten first come, first serve sites existed at Lakeview, but I only found two with that designation. I did not agree with the vibe of the Lakeview Campground, so I decided to continue my quest for a tent site elsewhere. I assumed I could return later and grab one of the two available sites. Lodgepole Campground was my location of choice, and it contained five walk up sites. I began driving along the river toward Lodgepole, but as I passed Lottis Creek along the way, I decided to make a quick survey. The web said that only two sites were first come, first serve (FCFS). Much to my surprise I discovered one campsite next to the campground host that was open on the Union Loop, and one available on the Baldy Loop. I quickly set up at the Baldy Loop site, as it was beneath a nice grove of evergreen trees and not next to the campground host. I unloaded the car with camping gear and set up the tent by 3:45PM, and this left me with some free time before dinner and clean up. What should I do? 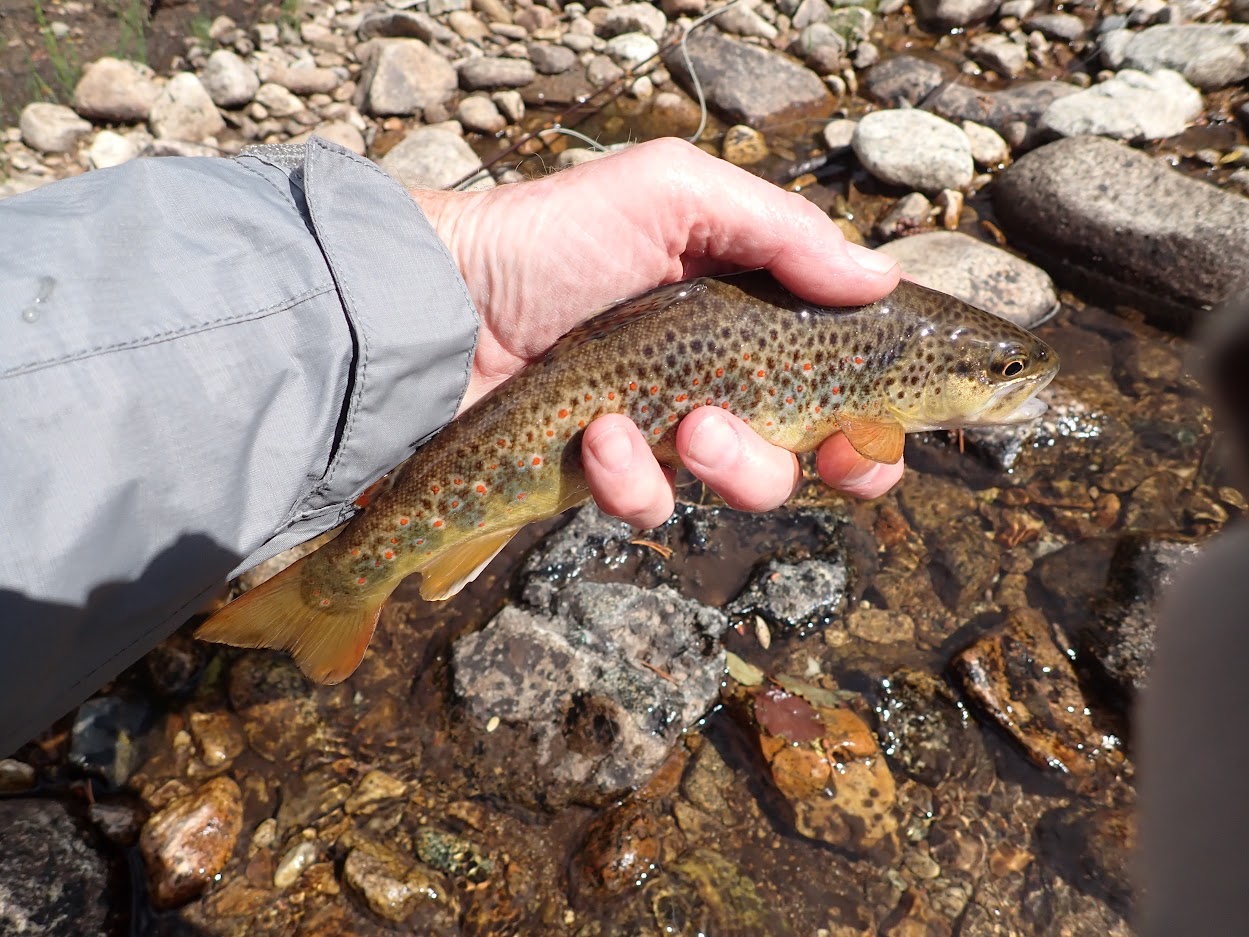 Lottis Creek ran by the campground on its way to the Taylor River, so I decided to devote an hour or two to the small tributary. After a disappointing day on the Taylor last summer, I defaulted to Lottis Creek for an hour and a half and experienced decent luck, so why not attempt a repeat? The sky was dark with clouds most of the time, but rain did not fall, until I returned to the campsite, but even that amount was minimal. The flows are not tracked on the DWR web site, but they seemed nearly ideal to me. During my 1.5 hours on the creek, no significant insects were observed other than a few small caddis. 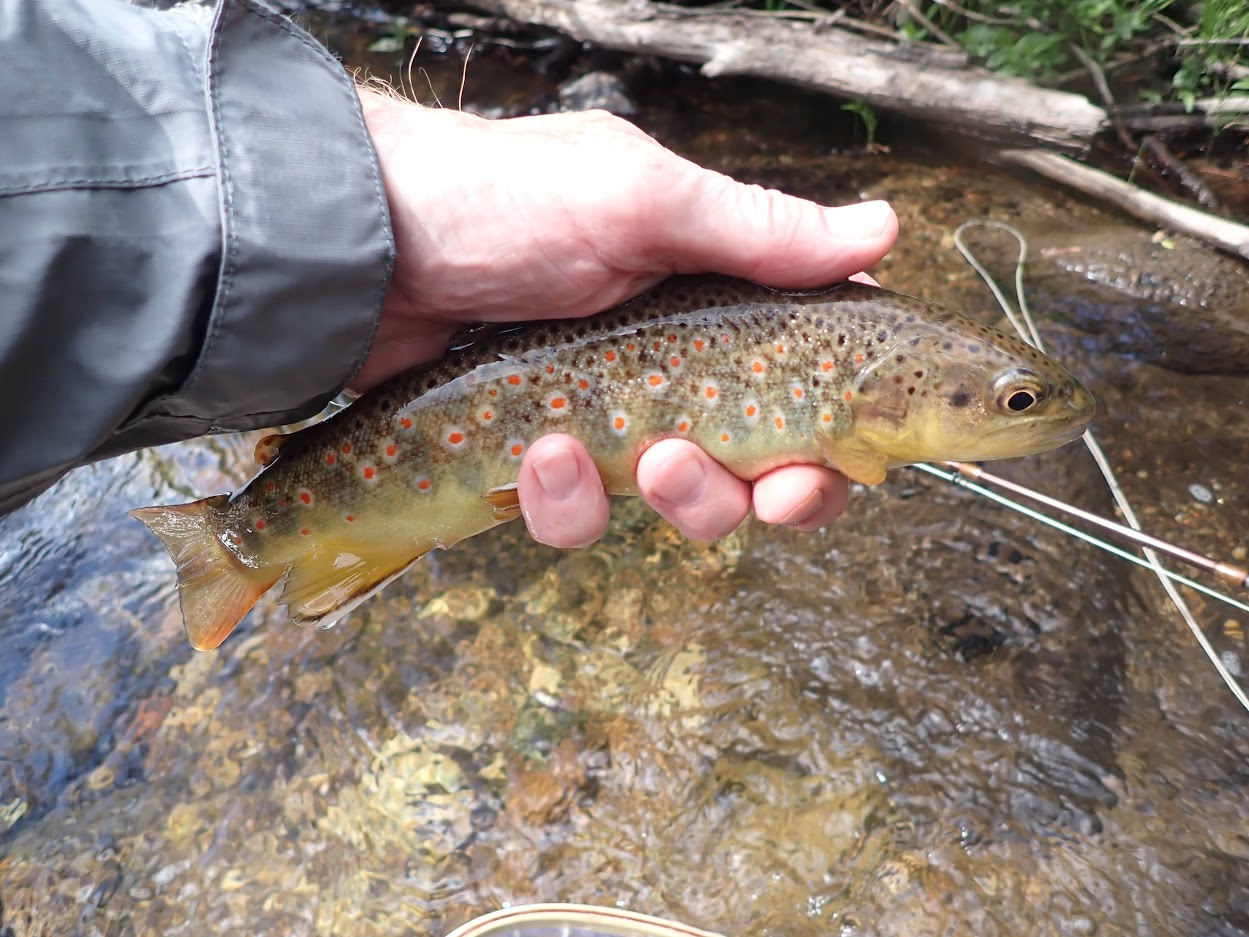 I fished the entire 1.5 hours with a size 14 peacock hippie stomper and a beadhead hares ear nymph. In an auspicious start I landed a decent wild brown trout on the second cast, when it gulped the hares ear. The greatest challenge on Monday was avoiding the tight streamside vegetation and untangling the inevitable snarls. I experienced steady action and moved constantly. Three brown trout crushed the hippie stomper, and five nabbed the hares ear. 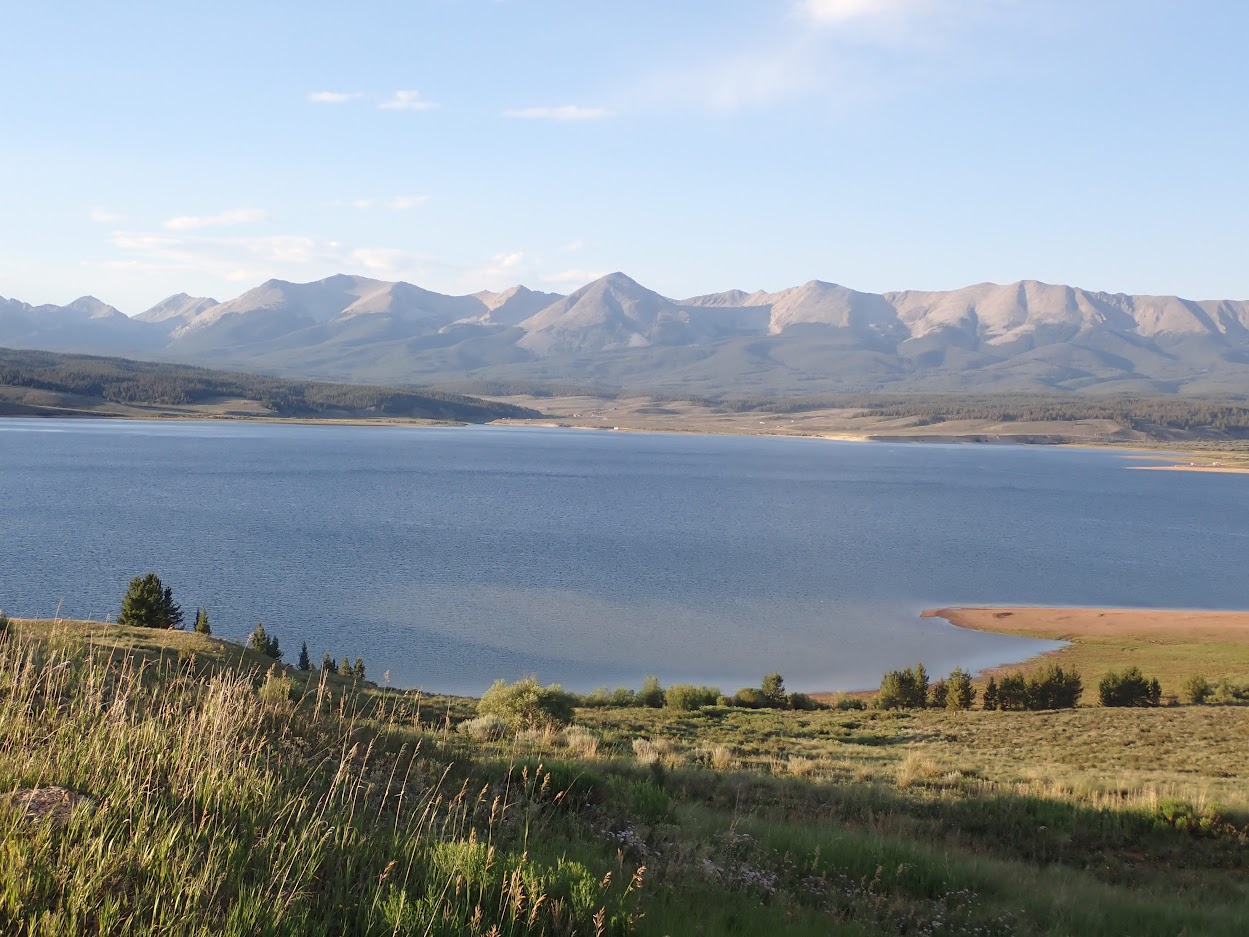 The Only Place with Cell Phone Signal

The late afternoon time on Lottis Creek was not perfect, as I endured numerous refusals and even more long distance releases, but it was a splendid introduction to the Taylor River valley and increased my anticipation for a full day of fly fishing on Tuesday.