Location: Between Red Bridge and Gateview

As I contemplated our camping trip to central Colorado, I envisioned the centerpiece river for fly fishing to be the Lake Fork of the Gunnison River, and I hoped to schedule that day on Tuesday, August 24. However, when Jane and I completed the trip on Sunday, it became clear that traveling back and forth on CO 868 was not a viable scenario. The drive from CO 149, a paved highway, to Big Blue Campground on CO 868 was twelve miles on a narrow and frequently rocky surface. It took us roughly forty minutes to travel twelve miles, and this translates to an average speed of 18 MPH. When we saw the low tire pressure warning on the dashboard of the Santa Fe on Monday morning, I concluded that the best scenario for our trip was to remain at our remote campground location for Monday and Tuesday and then visit the Lake Fork on our return trip to Denver on Wednesday. On Wednesday morning we packed up our camping gear and made the relatively short drive to the Lake Fork of the Gunnison River. Fortunately the pressure in the left rear tire remained constant, and we arrived at the Red Bridge Campground without incident.

We parked at one of the open campsites and took advantage of the picnic table to prepare and consume our lunches, and then I climbed into my waders and organized my fishing equipment for an afternoon of fly fishing. Jane and I drove north on CO 25, and the well maintained dirt road closely tracked the canyon section of the Lake Fork of the Gunnison River. It had been twenty years, since I last fished this section of river, so I was unable to recall the stretch that I fished, but every inch of the river looked amazing. The flow was quite healthy, and the water was clear, as it cascaded through plunge pools, pockets, riffles and long runs. The only negative to fishing conditions was the bright sun and the air temperature, which climbed into the low eighties for most of my time on the river. Jane Near My Starting Point

After a slow drive of a couple miles I turned into a wide pullout on the river side of the road and parked. I was seeking interesting water while also being cognizant of shade and a place, where Jane could be comfortable, while I fished. I strung my Sage four weight and ambled downstream along the dirt road for a short distance, until I found a reasonably manageable path to the river. My Colorado fishing guide book mentioned stoneflies as the “go to” fly for the Lake Fork, so I configured my line with a tan pool toy hopper, 20 incher, and beadhead hares ear nymph. I fished for thirty minutes through some outstanding structure, but the flies produced only two tiny rainbow trout and several refusals to the hopper.

I paused to reassess the situation. I decided to try some different nymphs before resorting to dry fly fishing. The 20 incher was returned to my fleece wallet along with the hares ear nymph, and I replaced them with an iron sally and salvation nymph. Now that my line carried lighter nymphs, I swapped the pool toy hopper for a peacock hippie stomper. I was hoping that pale morning duns and yellow sallies might make an afternoon appearance. For the next 1.5 hour I prospected the three fly combination in all the likely spots, until I was one hundred yards above where the car was parked. During this time I netted four trout; three rainbows and one brown trout, and the largest was nine inches, while the others barely exceeded the six inch minimum. In addition I hooked an equal number of tiny rainbows not large enough to meet my minimum criteria for registering on the fish counter. The salvation nymph was the popular offering, with one independent minded trout falling for the iron sally. 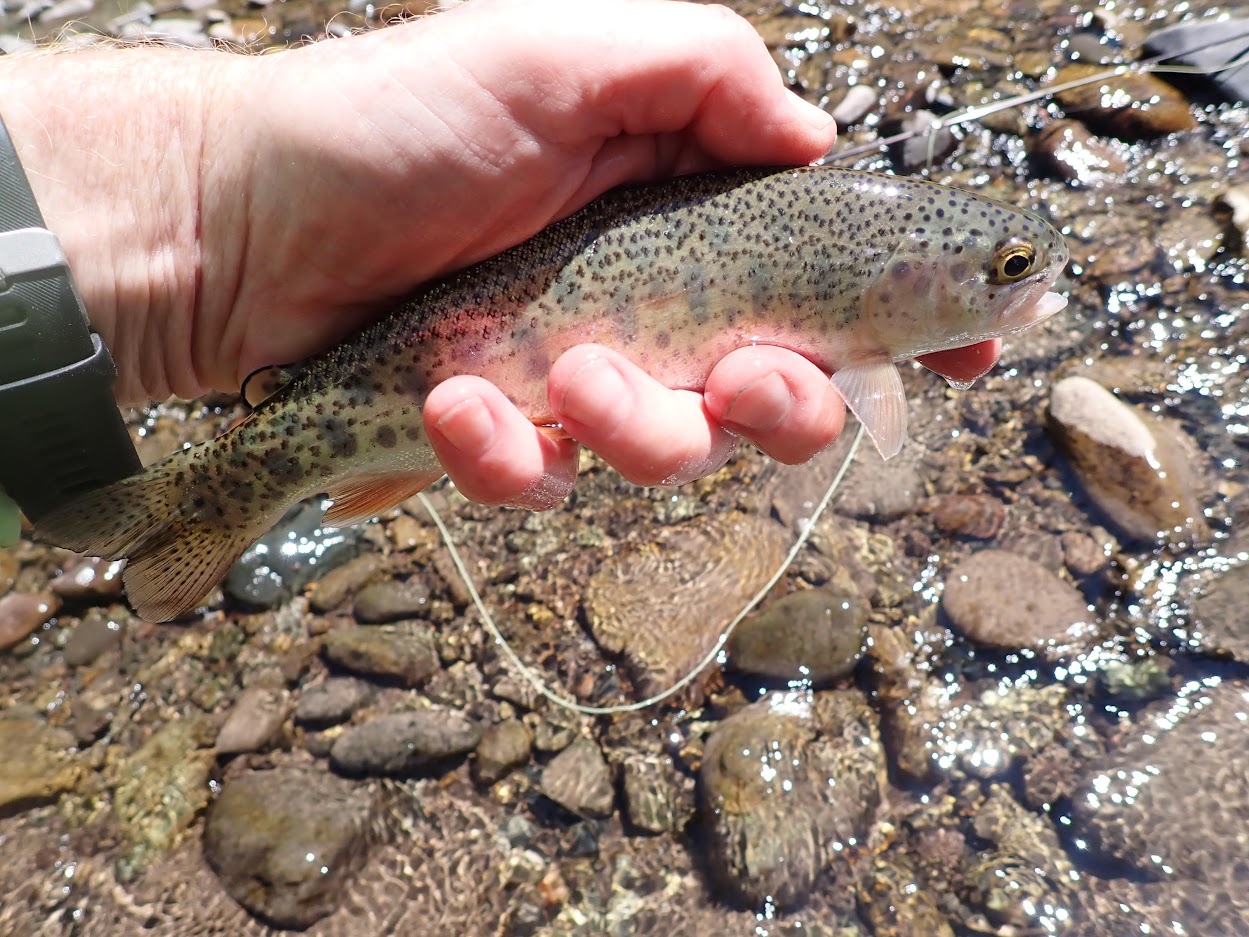 The fish that flashed to the hopper and turned away seemed to be slightly more substantial than the dinks that were fooled by the nymphs, so I decided to make a change to the top fly. I replaced the pool toy with a yellow Letort hopper. My theory suggested that the pool toy was too large, and the Letort hopper presented a smaller and narrower profile. It did not work, and the Letort hopper earned a quick hook. Were the fish looking for yellow sallies? I replaced the Letort hopper with a size 14 yellow stimulator, and the high floating attractor generated some interest in the form of splashy refusals. I did not observe any green drakes, but the guide book hatch chart suggested that green drakes hatched until the middle of August. Perhaps the fish had long memories. I employed a double dry approach with an olive ice dub hippie stomper twelve inches behind the stimulator. No dice. 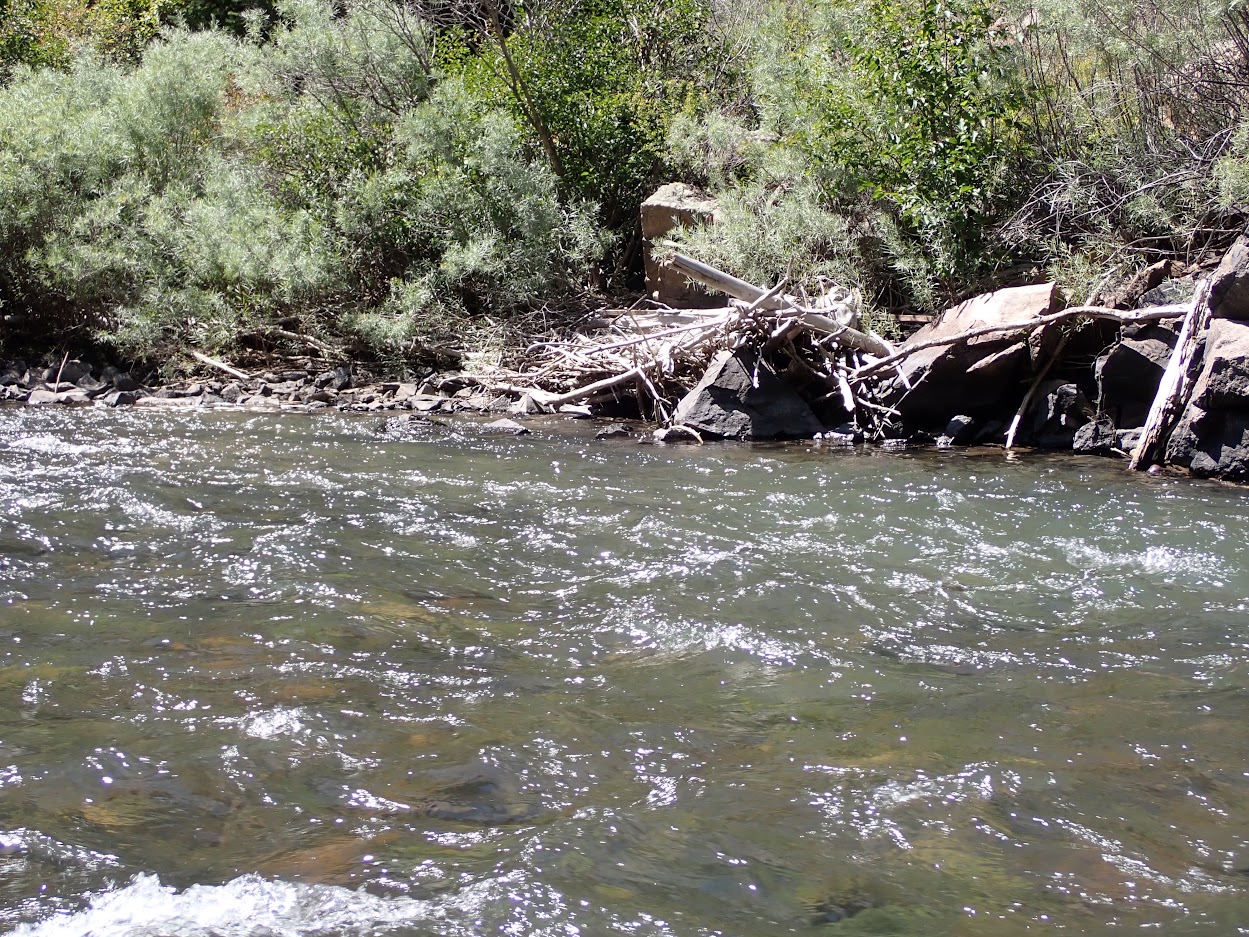 I was stuck on four landed trout, yet the river was cold and oxygenated and looked absolutely fabulous for fly fishing. Most of my minimal action occurred in fast water sections with deep runs and pockets. Perhaps my nymphs were not getting down deep to the larger fish? In a rare concession to difficult fishing conditions I resorted to indicator nymphing. I rigged up a New Zealand strike indicator and added a split shot and knotted the iron sally and salvation to my leader. I began drifting the nymphs deep along current seams and next to large exposed rocks, and I managed a few temporary connections with fish that felt a bit heavier than my previous catches. 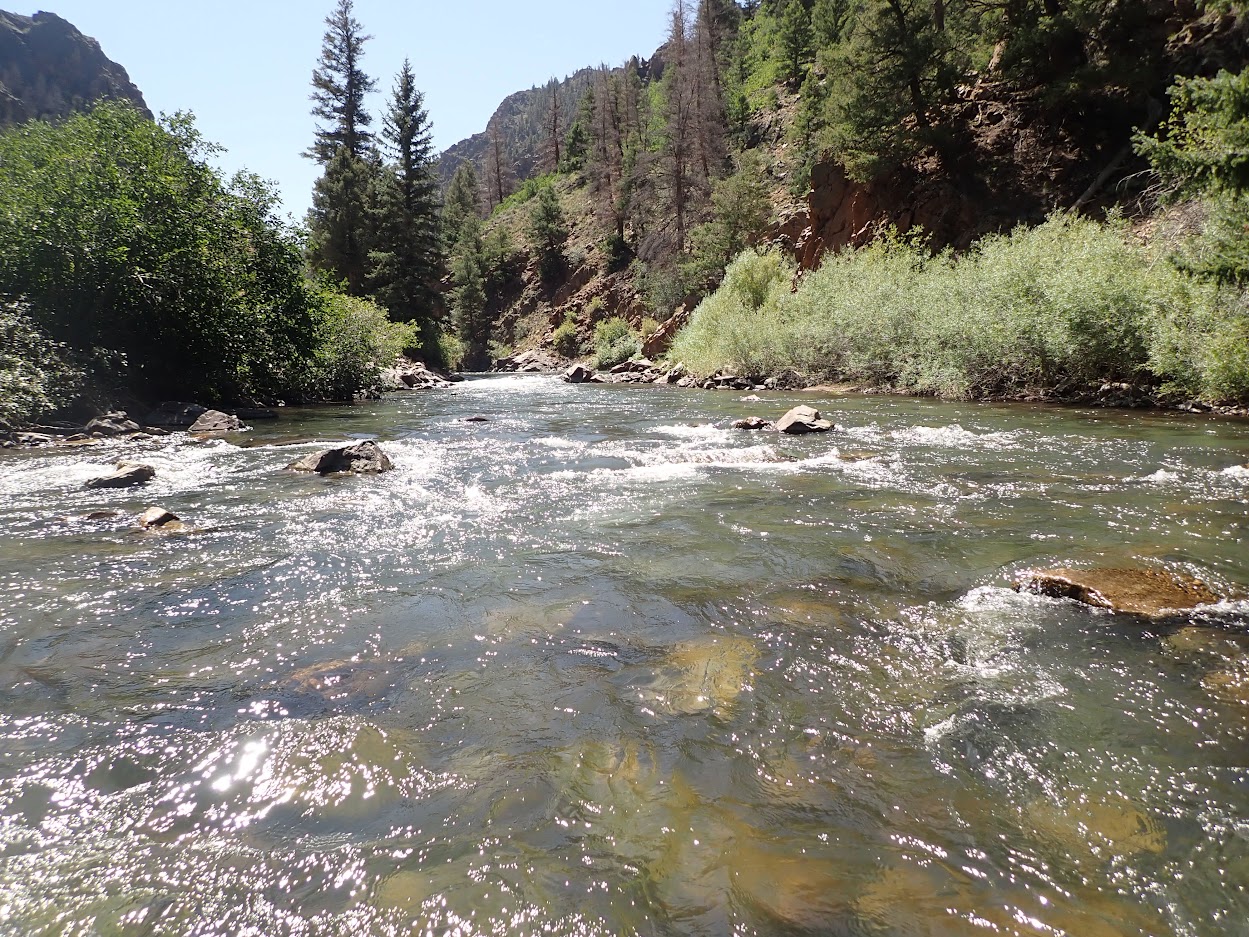 In the early afternoon I spotted a handful of mayflies that appeared to be pale morning duns, and this probably explained my success with the salvation nymph. Between three and four o’clock, however, some clouds rolled in, and I began to notice some small mayflies, as they fluttered skyward. Could the fish be keying on tiny blue winged olive nymphs? I snipped off the salvation and replaced it with a sparkle wing RS2. This move proved to be the most effective among a fairly weak series of ploys. I landed two more rainbow trout including my best fish of the day at eleven inches. In addition I felt the weight of four other trout, as they grabbed the small BWO nymph, when it drifted deep along the current seams or swept in front of a large protective structure. It was the best I could do on Wednesday, but admittedly it was a slow 2.5 hours on the Lake Fork of the Gunnison River.