I flew to Philadelphia on Tuesday, May 29 and rented a Toyota Corolla from Enterprise. My niece, Kyra, is a management trainee with Enterprise in Reading and obtained a sweet low rate deal for me. It was quite warm and humid as I drove to Whitehall, Pa. to meet my friend from Air Products, Jeff Shafer.

Jeff informed me that the flows on Penns Creek, the stream we most wanted to fish, were too high, but if we avoided significant rain over the next couple days, we might have a shot at it on the weekend. Jeff was targeting the Pohopoco Creek above Beltsville Dam for Wednesday morning. Unfortunately a storm moved in on Tuesday evening and pounded the Lehigh Valley and surrounding areas. When Jeff checked the Pohopoco, the line on the USGS graph went vertical. We packed the car on Tuesday night with most of our gear and went to the supermarket to pick up some critical food items.

When we awoke on Wednesday morning it didn’t look good for the Pohopoco, but our back up location was the Lackawanna River north of Scranton, so we decided we could scout the Pohopoco on our way north as it was only a short distance from the Pa. Turnpike. That’s exactly what we did, only to confirm that the flows were up and the water was quite turbid. We merged back on the northeast extension of the Pa. Turnpike and continued on to Archbald and found the mid-section of the Lackawanna River where Laurel Road dead ended. We had a book on Pennsylvania trout streams which guided us to the trophy trout water. The flows were at a nice level and water clarity was quite good.

Jeff and I hiked down the trail a ways and beyond some homes next to the river. We cut over to the river below the houses, and I began fishing nymphs in a very attractive riffle area. Unfortunately nothing went for my flies, and after covering thirty yards or so, we encountered a pair of fishermen above us. We exited and returned to the trail and hiked back past the houses to a place where the river cut against some large rocks. I cut down to the deep run next to the rocks and Jeff began working above the run with his streamer.

Once again I couldn’t connect with any fish despite working my nymphs through the beautiful deep run from all angles. I was certain that large fish resided in this spot, but I couldn’t entice them. When I caught up to Jeff he had converted to a caddis dry fly and was casting to the bank beneath some overhanging tree branches. Unfortunately on one of his casts he struck a branch and broke his tip, but it was only an inch or so below the top so he was able to continue casting effectively. 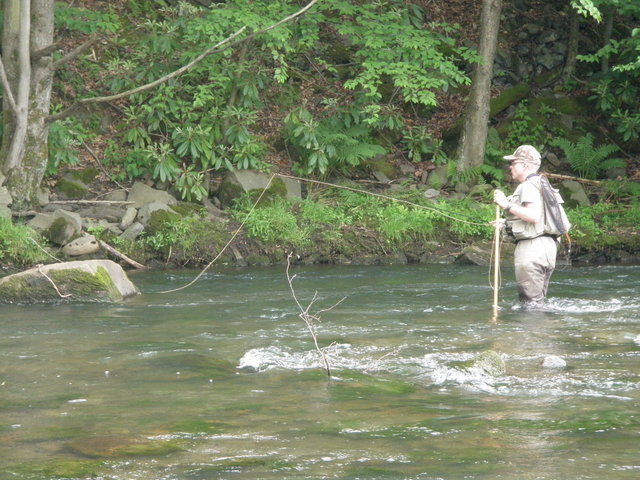 In short order Jeff landed a couple small browns on the caddis, so I tied a light gray caddis on my line and removed all the nymphing paraphernalia. I managed a momentary hook up on the gray caddis, but the going was pretty tough. At some point I added an RS2 below the caddis, but this didn’t produce either. Toward late afternoon I switched to a yellow Letort hopper hoping a large terrestrial would attract interest or perhaps it would be mistaken for a yellow stonefly. This didn’t work, but I noticed a random rise after some strong wind gusts, so added a parachute ant behind the hopper, and had a second momentary connection on the ant. Eventually I clipped off the ant and returned to a beadhead hares ear, but the fish were not to be fooled.

After dinner (submarine sandwich on the bench near the minivan), a local man arrived with his son to bike down the trail. He seemed to be knowledgeable on the fishing and suggested we should go downstream to a huge pool below the Winton Street Bridge. Jeff and I decided it sounded interesting, so after finishing our meal we found our way to the described area. It was indeed a huge wide deep pool, and we situated ourselves for an evening hatch or spinner fall as Ryan, our new friend, suggested sulfurs would be present. 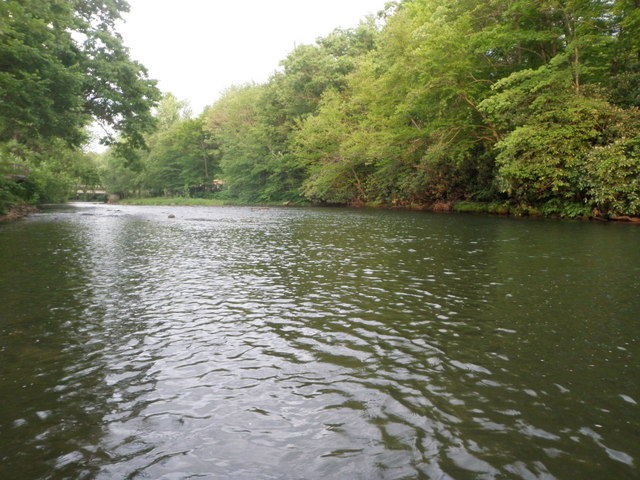 After a half hour or so elapsed we began to see sporadic sulfurs fluttering up from the stream. Unfortunately most of the more regular risers were positioned beneath some dense overhanging branches on the opposite side of the river. Due to the width and depth of the pool a favorable drift required expert casting ability; a tight loop and a fifty foot cast with a faster current between the fisherman and the drifting fly. I was unable to manage this complexity, but Jeff shot a tight loop under the canopy and connected on a nice fish. He didn’t think it was very large, but after playing for a bit, I decided to work my way downstream to get some photos. 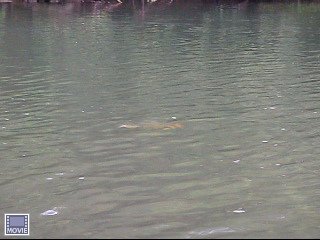 When I arrived I got a broadside look at the fish, and it was more than average. It was quite a beast. I took a short video on my camera and then as Jeff manipulated it closer, I obtained his camera and ran off a couple more video clips. When finally netted, Jeff measured the behemoth brown at 19 inches, and it was quite wide and heavy. We continued fishing after the adventure with the big guy, but a significant hatch never materialized and the rest of the night was anticlimactic.

At dusk we climbed the bank back to the car, shed our gear and followed the GPS out of Archbald to the Union County Rod and Gun Club near Penns Creek.