Location: MM10 to above spring

The Frying Pan remains my favorite stream in Colorado, and Thursday I was planning to make my first visit to these hallowed waters in 2013. Everything about the Frying Pan is magical beginning with the fishing centric town of Basalt, the 14 mile road that follows the river, the red rock cliffs and walls, Reudi Reservoir, the campgrounds, the spring, and of course the fish. The river is actually more like a creek yet in these intimate surroundings there is a high density of trout in the 14 – 20 inch range. Let one not forget the hatches. I enjoy prospecting hopper/droppers but I’m still partial to match the hatch fishing to rising trout and I can’t recall ever visiting the Frying Pan without experiencing some decent dry fly fishing to a hatch. 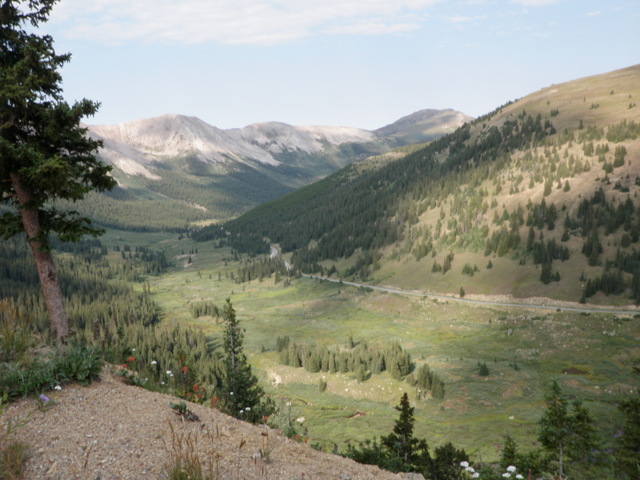 West Side of Independence Pass on Thursday Morning

Dave Loch, a new friend from Air Products, paid the Frying Pan a visit in July and this only served to make me more anxious to visit and fish there. Finally on Thursday, August 15 I would fulfill my wishes. I was up early at the Lakeview Campground near Twin Lakes and began my journey over Independence Pass and through Aspen, CO and then on to Basalt. I stopped in Basalt and purchased a new bag of ice for the cooler and then stopped at the spring near MM 10 to refill my water container. From here it was on to Little Maude Campground by Reudi Reservoir where I quickly snagged site number 6 and then unloaded a few items to make it obvious that the site was taken. Next I reversed course and drove back down the road and parked at the large pullout by the spring.

It was another warm day with clear blue skies, and I was concerned about how good the fishing would be. Most of the good pullouts on the upper two miles of the river were already taken, but no one was visible between MM10 and the spring, so I guessed that I could propsect the pocket water and work my way up toward the attractive water across from and above the spring. I had no idea whether green drakes or PMD’s would hatch in this area.

I walked down the shoulder of the road as a steady stream of cyclists passed me on their way to Reudi Reservoir and stopped at the downstream border with private water as indicated by no trespassing signs. My starting point was just above a small island where the river widened to create some shallow riffles that I could wade across to get to the opposite bank. My strategy was to prospect the south bank and eventually arrive at the nice deeper pockets and pools across from the car.

I was getting a bit of a late start as I entered the water at 11AM and of course I tied on a Chernobyl ant and beadhead hares ear. I probed some deeper slots and pockets on the side near the road with no success and then waded to the oppposite bank as planned. Here I was frustrated by a couple refusals to the Chernobyl ant, but then I extended a long cast closer to the bank to some nondescript water that was no more than three feet deep and I was surprised to see a buttery golden brown smash the Chernobyl ant. I carefully played the strong fish to my net and then carefully released it in some slow moving water to aid recovery. 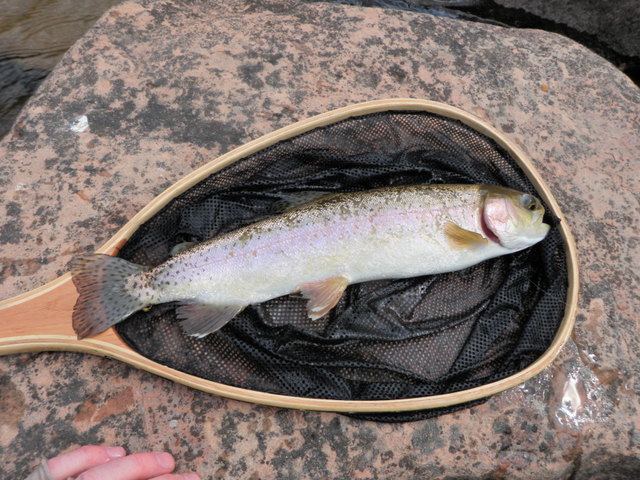 The beadhead hares ear didn’t seem to be adding any value so I exchanged it for a salvation nymph, and then in response to visible midge clouds, I added a third fly, a zebra midge larva. Eventually I switched the zebra midge for a RS2 and WD40. The Chernobyl, salvation and RS2 or WD40 became my workhorse combination as I worked up along the right bank and landed a 15 inch rainbow and another nice brown. I was amazed at the unspectacular locations that were yielding nice fish. By 1PM I’d landed seven fish and I decided to cross at the top of a second small narrow island and return to the car for lunch. Of the seven fish landed, one consumed the salvation nymph, two fell for the RS2 and four crashed the surface for the Chernobyl ant. All of my diverse trio of offerings generated some interest.

I took my lunch to a large rock next to the river across from the spring and munched it while observing for visible fish or insect activity. I didn’t really spot anything of interest so I returned my lunch bag to the car and prepared to resume fishing. As I walked up the road before lunch I passed a guide and customer going the other way and noticed that they entered the river where I had just exited, so after lunch I decided to begin across from the spring and fish up along the right bank. This was really the attractive stretch of water I desired to be in and it was already close to 1:30PM when hatching activity might begin. As I began fishing another guide and customer appeared along the left bank 30 yards above me, but they weren’t close enough to create any interference of my fishing or vice versa. 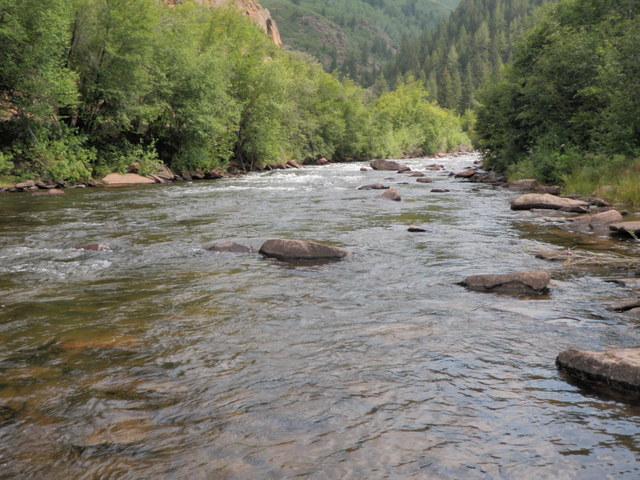 Frying Pan Looking Upstream from Across from Spring

I began prospecting the same trio of flies that produced seven fish before lunch, but they were not longer favored by the fish. It’s amazing what a change of location and thirty minutes can do to fishing success. I hadn’t spotted any green drakes, but 1-2PM is generally the time when they appear, so I thought perhaps the fish were tuned in to them, or perhaps one could serve as a large attractor. I clipped off the trio of flies and tied on a size 14 parachute drake with a natural grizzly hackle. I’d used this same fly on the Taylor River and Big Thompson with success, but it was a bit mangled and the hackle was climbing up the wing post.

The used fly did not seem to bother the fish as I landed a bunch of medium size browns. The first two came on downstream drifts in some deep narrow slots when I flicked the large parachute drake to the top of the lane and kept the line off the water and allowed the fly to slowly float the length of the slower moving water. As the fly reached the tail it was attacked aggressively by medium size brown trout.

As I worked across the river I encountered a spot where the current angled against the far bank and then deflected and ran for another ten feet along the grassy bank. Here I landed another three browns that pounced on the green drake, and as I played and landed these fish I observed a nice sized fish rising and working in a shallow cushion of water just in front of a submerged rock next to the bank just above the deflection point. I made some accurate casts above this fish but it ignored my green drake yet continued to rise to something. I was now observing the occasional PMD in the air, so I clipped off the green drake and tied on a light gray comparadun and placed some nice drifts over the area of the rising fish, but apparently casting the green drake had alerted the fish and it no longer rose nor was it visible with my polarized sunglasses.

I moved on and decided to revert back to the green drake but received several refusals so I swapped it for a fresh version with a dyed olive parachute hackle.This fly was slightly smaller than the bedraggled speciman I started with, and it also produced some fish. As this was transpiring several periods of overcast skies caused by some large clouds blocking the sun initiated a light PMD hatch, and this provoked another switch to the light gray comparadun but once again the fish ignored it.

Again I reverted to a green drake but this time I decided to go large, and experimented with a size 12 parachute drake with a dyed olive hackle. Much to my surprise as I lifted my rod tip to recast when the fly was five feet in front of me at the lip of a small pool, a 16-17 inch rainbow snatched the big drake! What a thrill to pound up such a large fish that I hadn’t spotted just a few feet in front of me. After releasing the large rainbow I resumed casting to rising fish in the deeper runs, but again I couldn’t generate any consistency. Once again some clouds moved in and another overcast period ensued thus provoking another wave of PMD emergence, and again I followed suit with a switch back to the comparadun.

Ahead of me was a sweet 8X10 foot pool and as my comparadun drifted through the center of this area, a monster brown jumped on my fly. When I got a good look at the fish as I carefully played it, I was certain that it would measure in excess of 15 inches. Luckily I was able to get a close look at the fish as I landed it and spread it out on my net for a photograph and it was easily 17 inches if not 18 inches. I clearly remember that this was fish number 18 on the day, and I was shaking with excitement as I resumed fishing. Once again however the clouds moved on and the sun reappeared and the PMD hatch waned so I again returned to the size 14 olive hackle green drake. 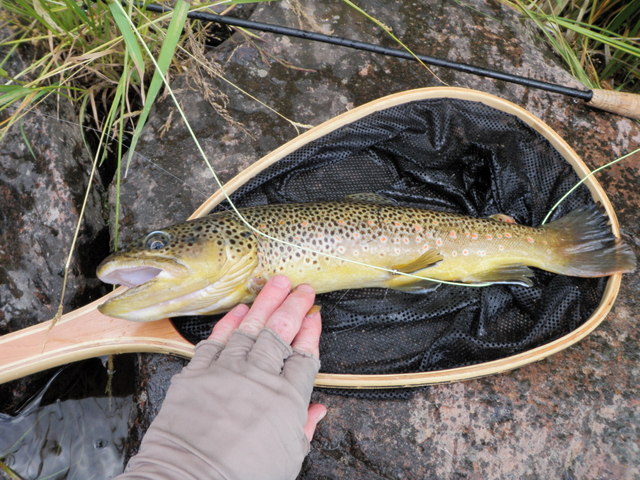 17″ Brown Was Highlight of Thursday

I prospected this fly through some smaller pockets as the river narrowed and offered fewer attractive spots, and added two more small browns to my count to reach twenty. It was now 5PM and I’d run out of juicy spots and I still had to put up my tent, so I retreated back along the south bank and then crossed back to the road, and called it a day, and a fine day it was. Twenty fish with four or five in the 14-18 inch range was certainly a satisfying effort. Catching fish on my parachute green drakes that I created over the winter was very gratifying as well, and being able to prospect and fool educated Frying Pan fish on the Chernobyl ant before lunch was an added bonus. I returned to the campground in a very happy state of mind. 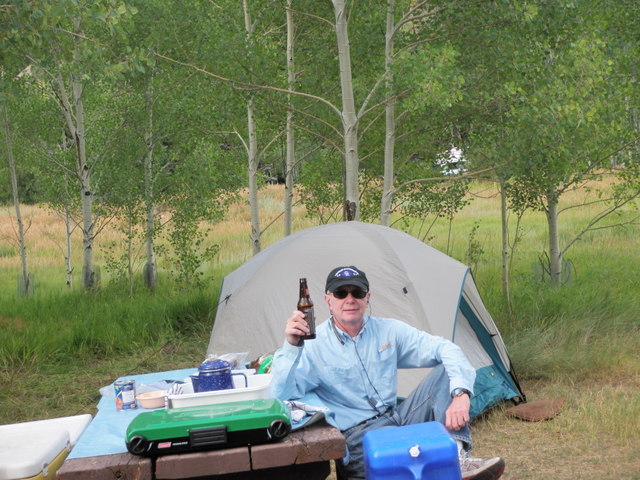