Location: Between the dam and Baetis Bridge; .5 mile below Baetis Bridge and back to Bend Pool below the bridge; Taylor Creek Cabins private water

After a tough but rewarding day on Wednesday, my feelings toward Thursday were divided, as we prepared to once again attack the Frying Pan River. Steve’s weather forecast projected highs in the eighties with minimal cloud cover, and this augured challenging conditions. I also dwelled on my lack of minuscule gray midge imitations, and nothing changed overnight to alter that situation. On the positive side I managed to land sixteen excellent trout including several above average in size on dry flies during a hatch. The latter accomplishment added a layer of positive anticipation for Thursday.

Were my reservations and optimism misplaced? Thursday proved to be a very challenging day on the Frying Pan River. In my opinion the tough conditions were attributable to pure blue skies and warm temperatures. Ed, Steve, and I parked near the Wednesday pullout, and I was prepared to fish by 9:30AM. I deployed my Sage four weight once again, and since I observed no evidence of surface feeding, I rigged a dry/dropper configuration and skirted the pool that occupied me for most of Wednesday.

I began prospecting with a yellow fat Albert, ultra zug bug, and a sparkle wing RS2; and I covered the faster water between Wednesday’s pool and an upstream weir that spanned the river. The dry/dropper did not produce in the early going, so I exchanged the ultra zug bug for a bright green caddis pupa. My efforts continued in a futile trend, until I neared the end of the fast water section, when I hooked and landed a small brown trout on the RS2.

At this point I circled back to a point just below the car, and as I observed from the high bank next to the road, several trout began to pluck invisible morsels from the surface. I scrambled down the rocky bank and spent the remainder of the morning in a state of frustration, as I churned through all manner of tiny gray flies contained in my twenty-five year old midge box. After a lengthy trial run in the first section I surrendered and moved to a gorgeous area between several large exposed boulders. Large fish were rising everywhere in the deeper channels between shallow flats. 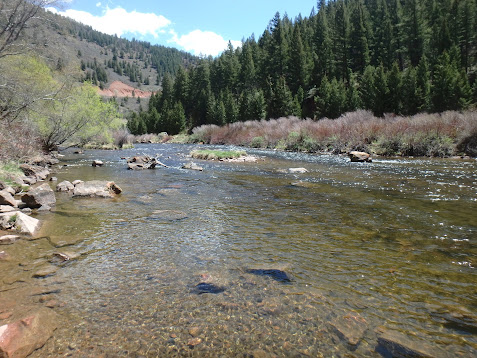 Much of the Day Spent Here

I finally brought some stream analysis to the endeavor, and I seined the water, and within seconds the white mesh was clogged with a massive quantity of midge larva, emerging midges, and a few adults. The adults were size 24 or possibly smaller, and the larva were very slender and also a size 24. Fifty percent of the residue in the net was larva casings. I was astonished by the amount of protein collected in a brief dip of my net. The midges more than made up for their tiny size with an astounding quantity of insects in various stages of the life cycle. 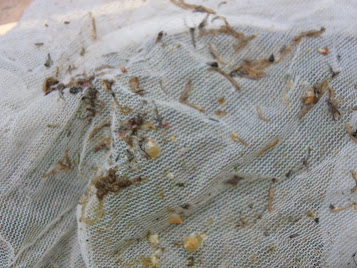 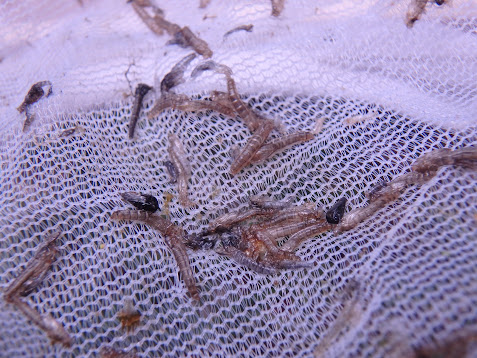 After I finished my stream life analysis, Steve joined me, and he assumed the downstream position, while I targeted the top of the runs. An abundant quantity of visible fish elevated my heart rate, as they finned just below the surface and slowly sipped tiny midges in a steady rhythmic cadence. Surely one would mistake my small gray offering for the real thing! Finally just before lunch I tied a size 24 black midge adult to my line, and the minuscule fly duped a twelve inch rainbow trout. Ed donated this fly to my cause on Wednesday during lunch.

Thursday morning featured 2.5 hours of frustration. Flies that worked albeit temporarily on Wednesday were totally ignored on Thursday. I was in a state of bewilderment and clueless regarding my afternoon approach to the dense hatch of diminutive midges. 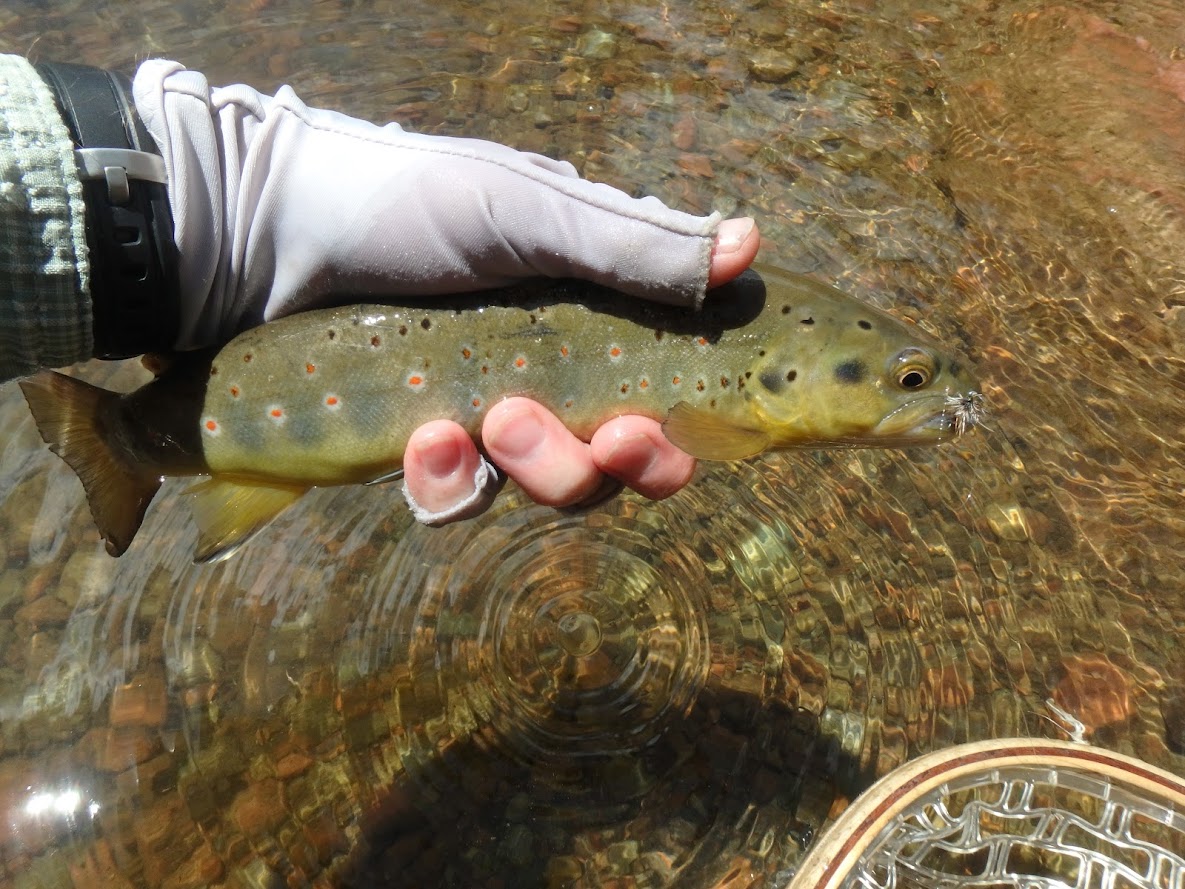 After lunch Steve and I once again manned our positions of the morning, and after additional futile casting I began to experiment with large visible lead flies trailing small midge larva imitations, that were impossible to track. Much to my surprise I hooked and landed a feisty thirteen inch brown trout that attacked the size sixteen olive brown deer caddis that served as my lead fly. In addition I experienced a temporary hook up with the caddis.

Another period with no action and decreased surface feeding provoked me to experiment with a size 12 Jake’s gulp beetle. The wind was gusting intermittently, and I postulated that terrestrials were in the mix. Once again I was pleasantly surprised, when the beetle produced a temporary connection, and then it fooled a much appreciated rainbow. The pink striped missile streaked up and down the pool, until I finally coaxed it into my net. I photographed and admired my best fish of the day. 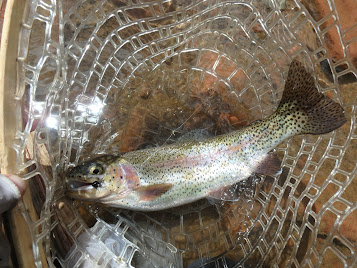 Beetle Visible in the Mouth

After the rainbow landing the midge food source dwindled, and the trout scaled back their feeding activity. Steve decided to investigate the bridge pool, and I accompanied him. When I stood on Baetis Bridge, I observed only placid water with no evidence of rising fish, and the high sun caused the air temperature to soar, so I decided to hike downstream via the road for .5 mile, until I found some faster water. I theorized that a dry/dropper approach in the faster currents improved my chances of success given the higher air temperatures and lack of cloud cover. 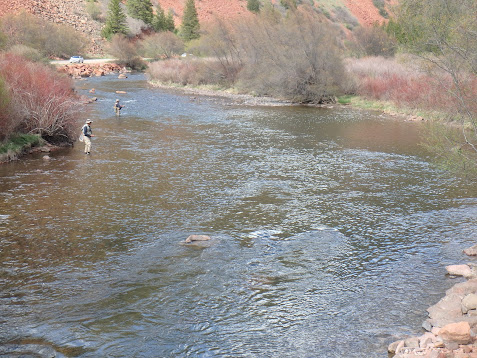 The Pool Above Baetis Bridge

My theory was in fact upheld, as I deployed a yellow fat Albert, emerald caddis pupa, and salvation nymph and guided six additional trout into my net. Two were rainbows in the thirteen inch range, and the others were smaller brown trout. One of the rainbows snatched the caddis pupa, and the salvation yielded the other landed fish. 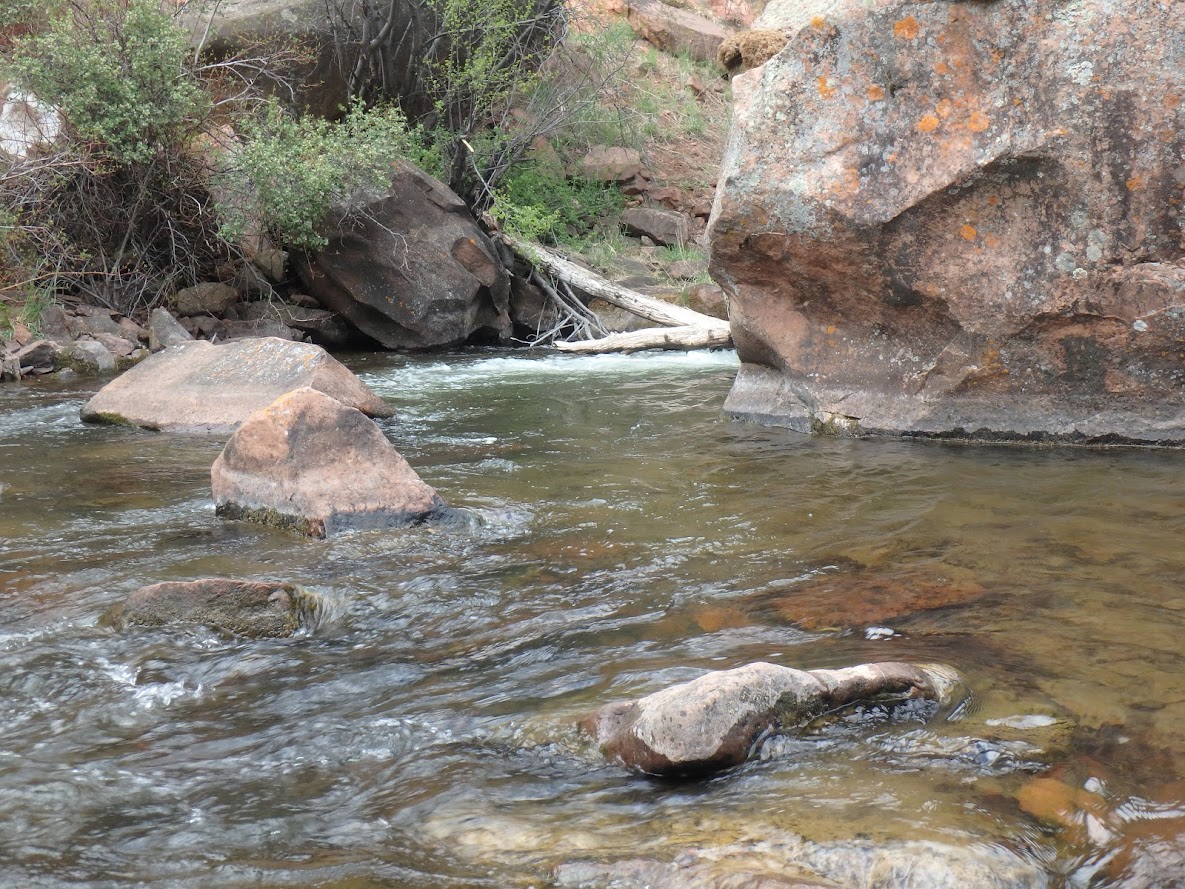 Channel Between the Rocks Delivered 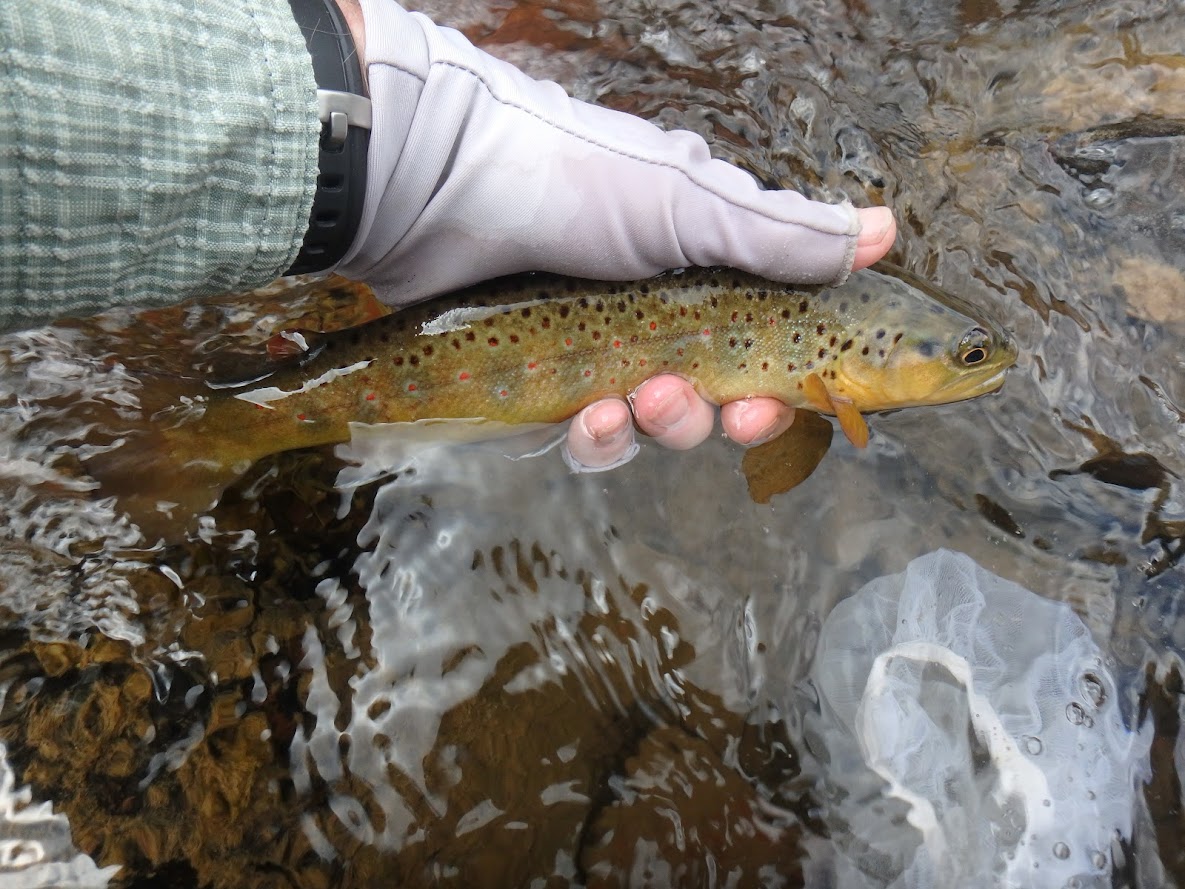 When I reached the slow bend pool below Baetis Bridge, I climbed to the road and circled back to the bridge and then continued toward the car, where I found Ed and Steve next to the same spot that frustrated us earlier in the day. I once again waded in above Steve and converted to a black parachute ant, but it was soundly ignored by the occasional risers in front of me. I was about to switch back to Jake’s gulp beetle, but Ed and Steve were ready for happy hour, so we stowed our gear and returned to the cabin. 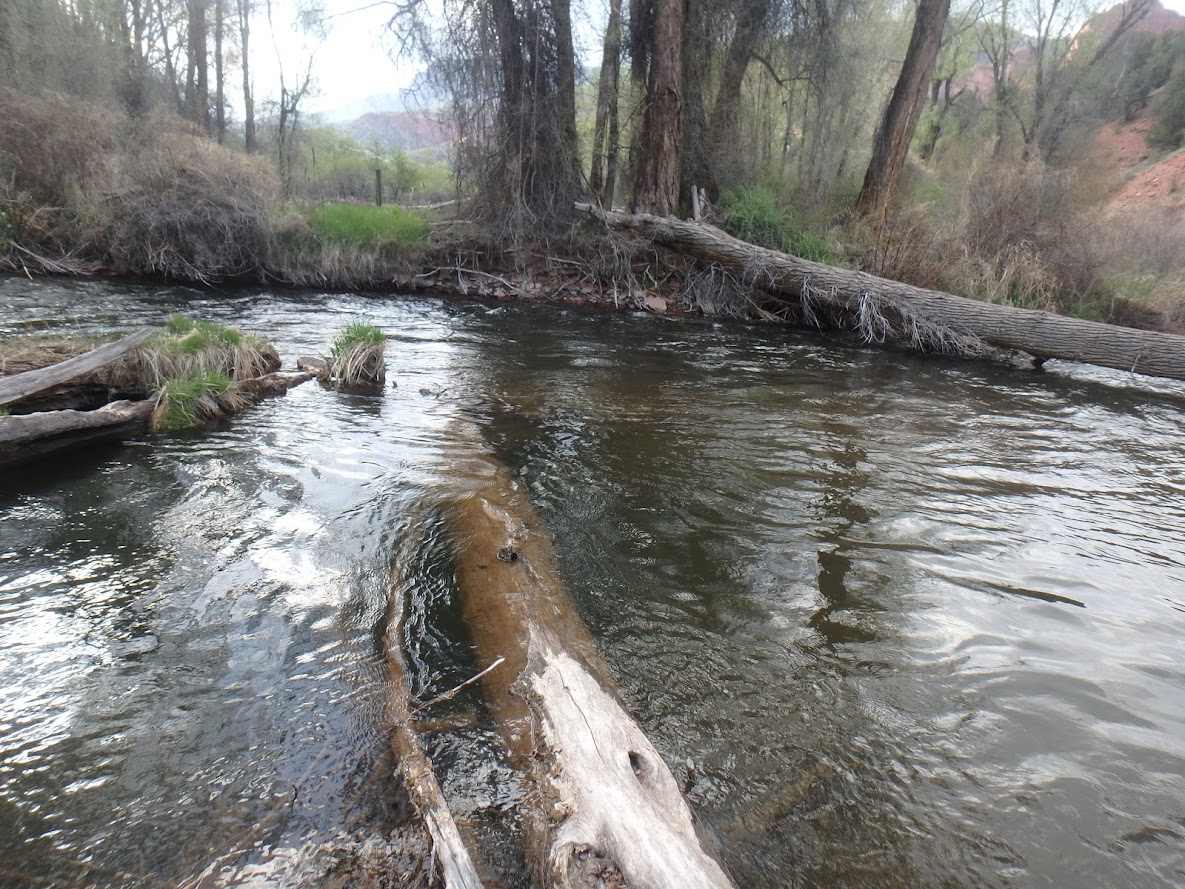 Before removing my waders and breaking down my rod, I decided to sample the private water across from the cabin, and I moved upstream from the “log jam” to the bench at the end of the path across from the driveway to the cabin. During this brief foray in the middle section of the Frying Pan River I prospected with a yellow Letort hopper and a salvation nymph, and I landed two additional brown trout that attacked the salvation. 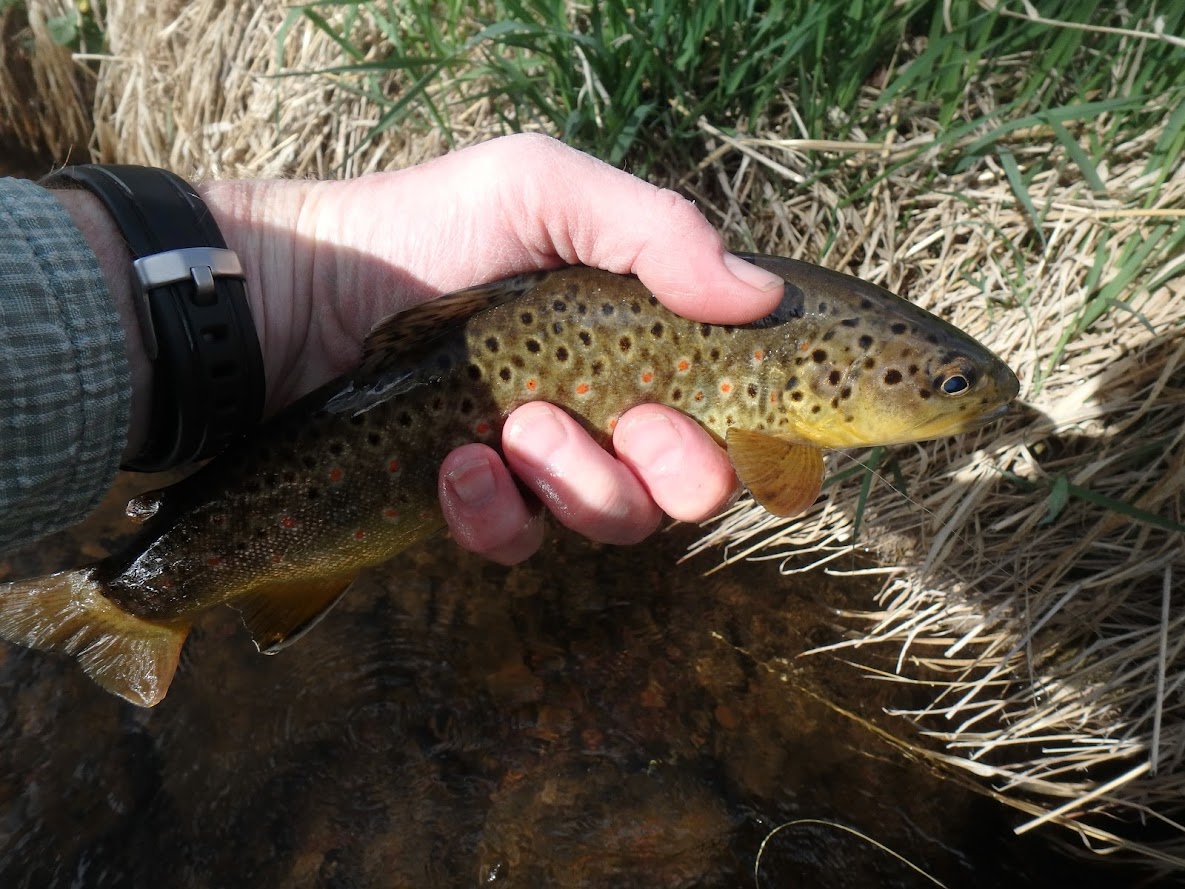 Thursday was a tough day, but I managed to land twelve trout including a few in the 13 – 14 inch range. I also invested some time to research the prevalent food source, and I discovered that size 24 midge larva, emergers and adults were on the menu. Although it is unlikely that I will return to the Frying Pan River near term to leverage this knowledge, I plan to add some tiny imitations to my fly boxes in case I visit again in the spring of future seasons. A new design is already dominating my thought patterns.