Location: Pond next to the entrance gate.

Our friends, the Gabourys, invited us to join them once again at their beautiful home in Eagle, CO on October 6 through 8. I expected to fish with Dave G. on Monday, but after we arrived on Sunday morning, he proposed a short session on the Frost Creek Ponds. Dave G. is a member of the Frost Creek Country Club, and this entitles him to fish the ponds and a private section of Brush Creek that runs through the property. Dave G. also informed me that he experienced decent recent success on one of the ponds using a size 16 parachute Adams. I was easily swayed to respond in the affirmative to this surprise invitation to fly fish on Sunday. My wrist was still rather sore from my pratfall on Thursday, but I decided a two hour session would be a good first test. 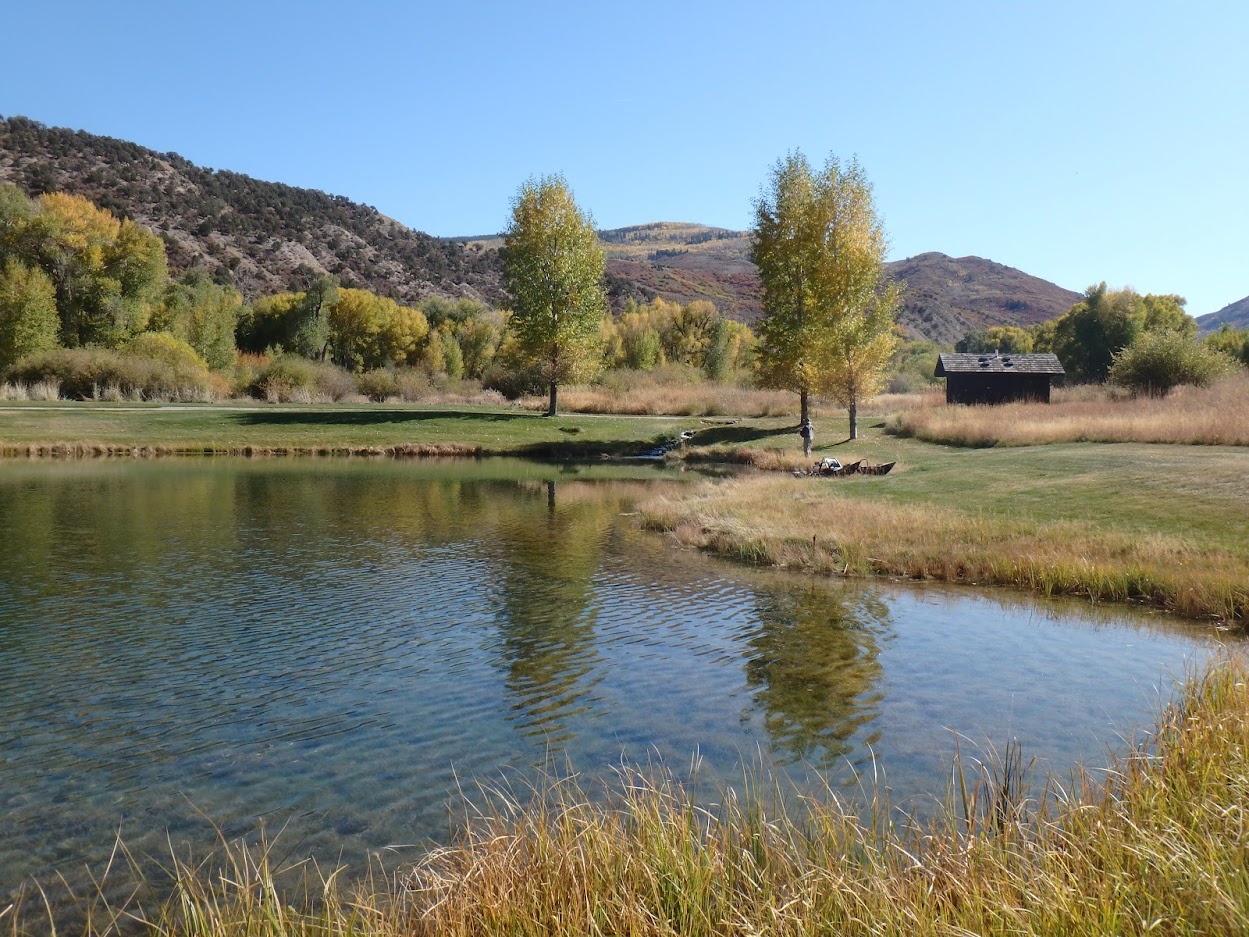 Upon our arrival we parked just inside the entrance gate, and I quickly rigged my Sage One five weight. I chose my largest rod to support long casts to the center of the still water, and in case I tangled with a substantial fish. When we were completely prepared to fish, we walked to the south end of the pond. Sunday developed into a gorgeous fall day with the temperature in the low seventies. Intermittent light wind was not a negative factor, and the surface of the pond remained relatively smooth during our stay.

Before casting I paused to observe, and my heart beat elevated, as I spotted nice chunky cruisers and sporadic rises. Dave G. began with his favored parachute Adams, but I opted for a size 18 parachute black ant in response to the occasional wind and surface sips. In the first twenty minutes I endured two refusals, and then I connected with a nice spunky thirteen inch rainbow. 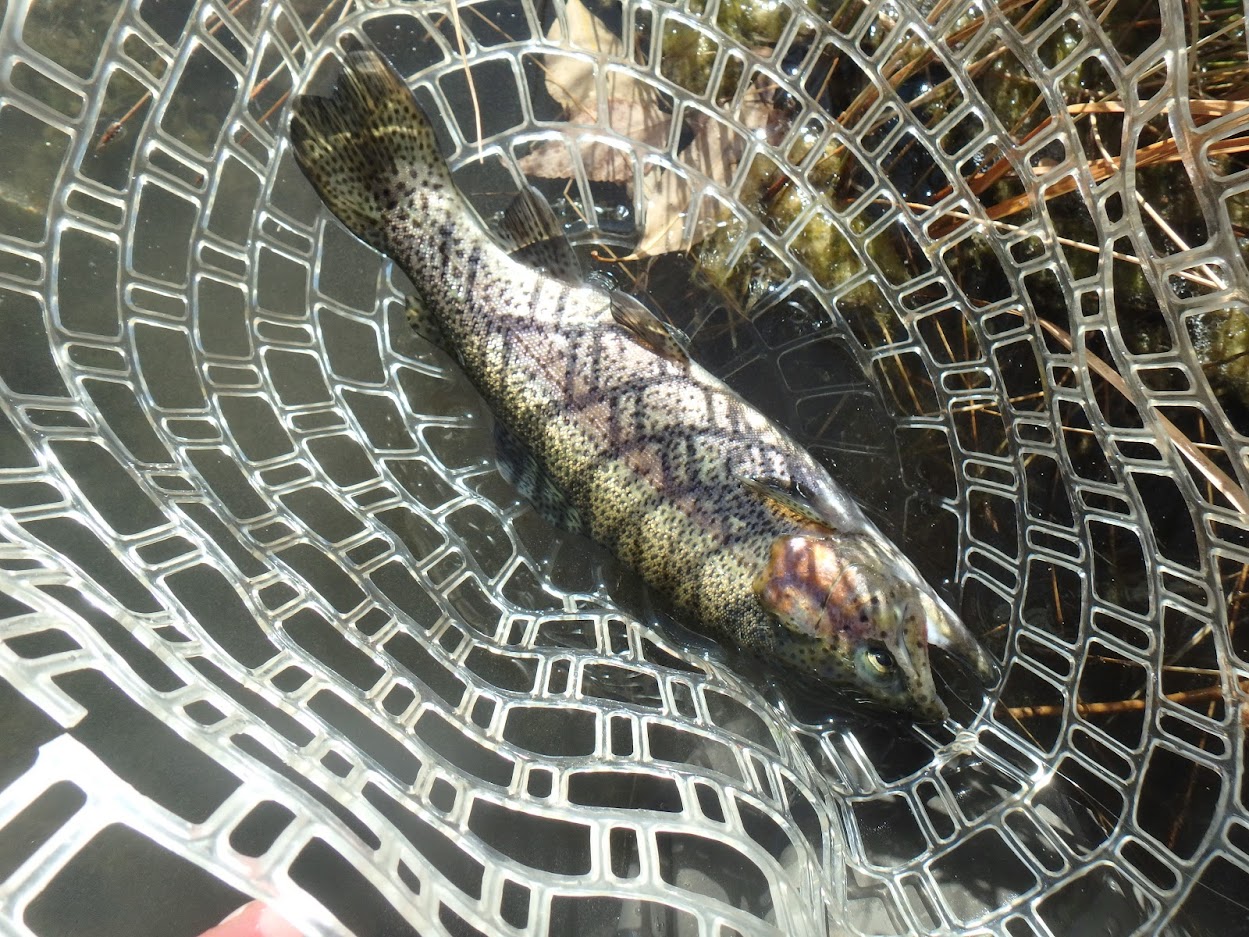 Just as I congratulated myself for capitalizing on the terrestrial option, the action ceased, so I began to migrate around the pond in a clockwise direction. In the southwest corner I spotted quite a few large cruisers, but they ignored the ant, and I switched to a size 20 CDC olive. I speculated that it would imitate a variety of small aquatic creatures such as midges and baetis adults. Unfortunately my theory did not prove out, and I covered thirty yards of shoreline without any sign of interest from the pond residents. 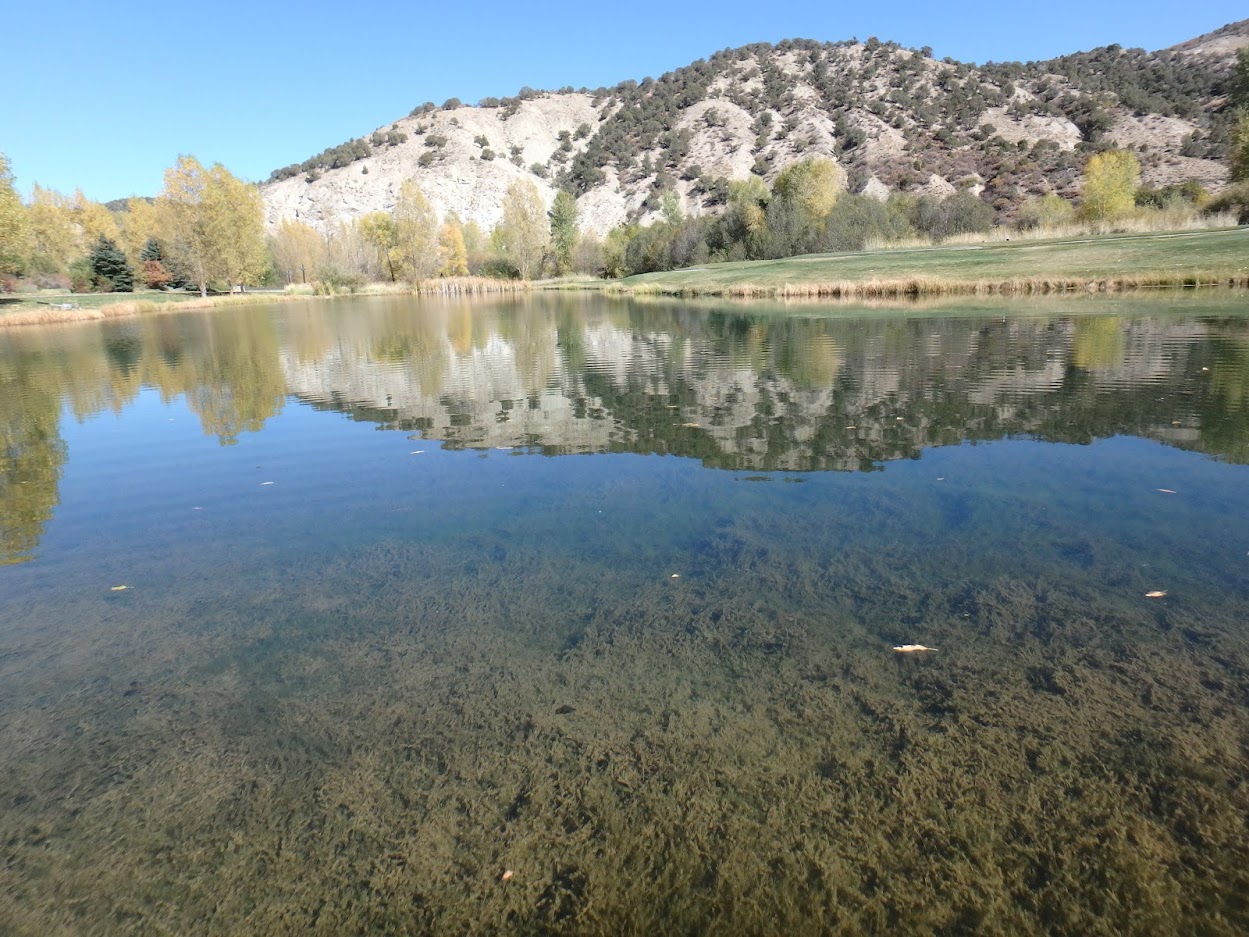 When I arrived at the northwest corner, I decided a change was in order, and I replaced the olive with a size 12 Jake’s gulp beetle. Soon after the switch the plopping beetle created quite a bit of interest as evidenced by the looks, refusals, and flashy swirls that ensued. In spite of the flurry of frustration, I remained committed and eventually hooked and landed a fine fourteen inch rainbow. Upon releasing the much appreciated gem, refusals resumed, so I downsized to a size 14 beetle. 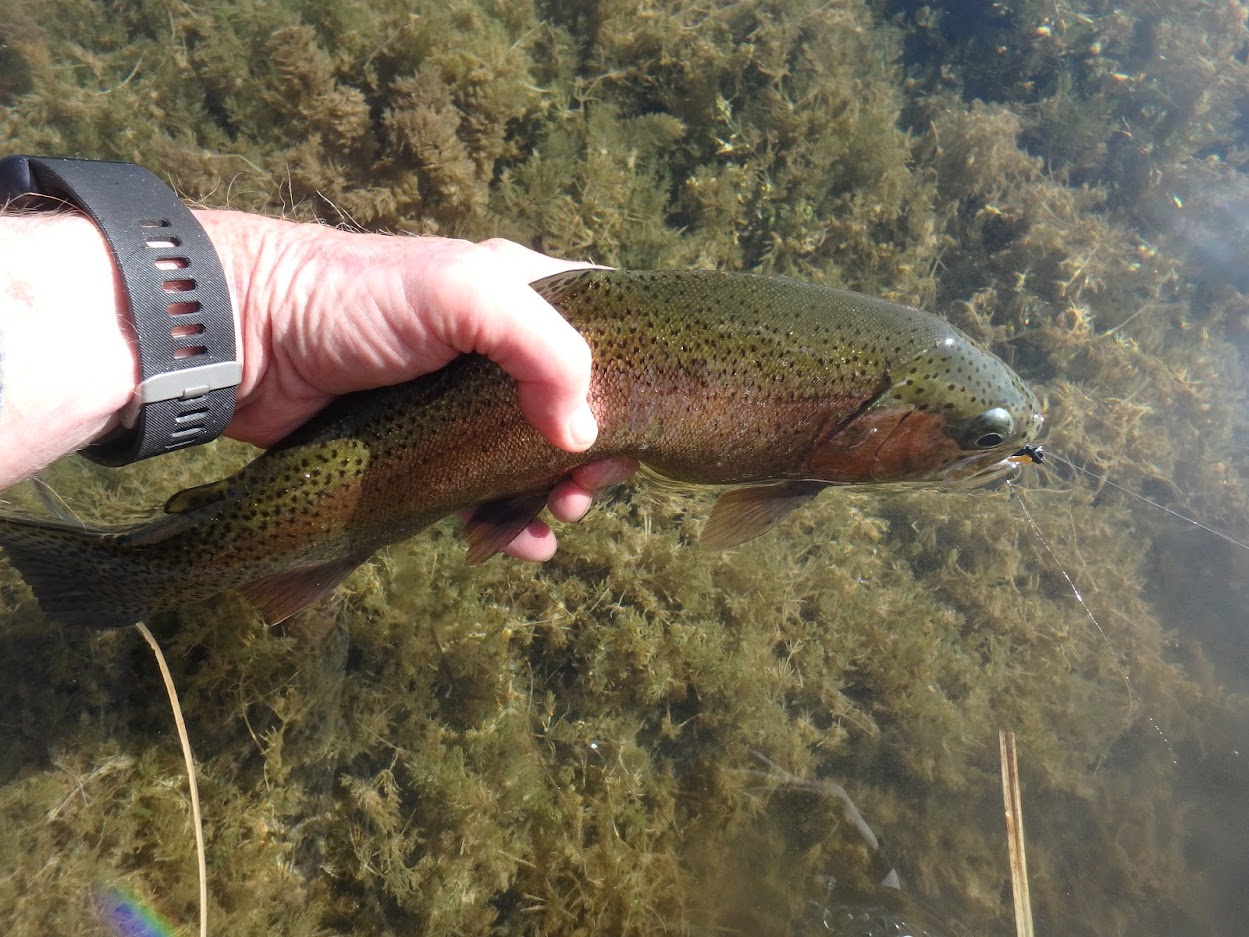 Lifted from the Pond

The smaller beetle produced, when a twelve inch rainbow darted three feet to crush the terrestrial. Dave G., meanwhile, took a page from my book and tossed a black ant. The size 16 fur ant produced two landed fish and two break offs. This success grabbed my attention, and I added a size 18 ant on a six inch dropper behind the beetle, and I returned to the southeastern corner of the pond. Here I earned temporary hookups with two fish, and I suspect they latched on to the ant. 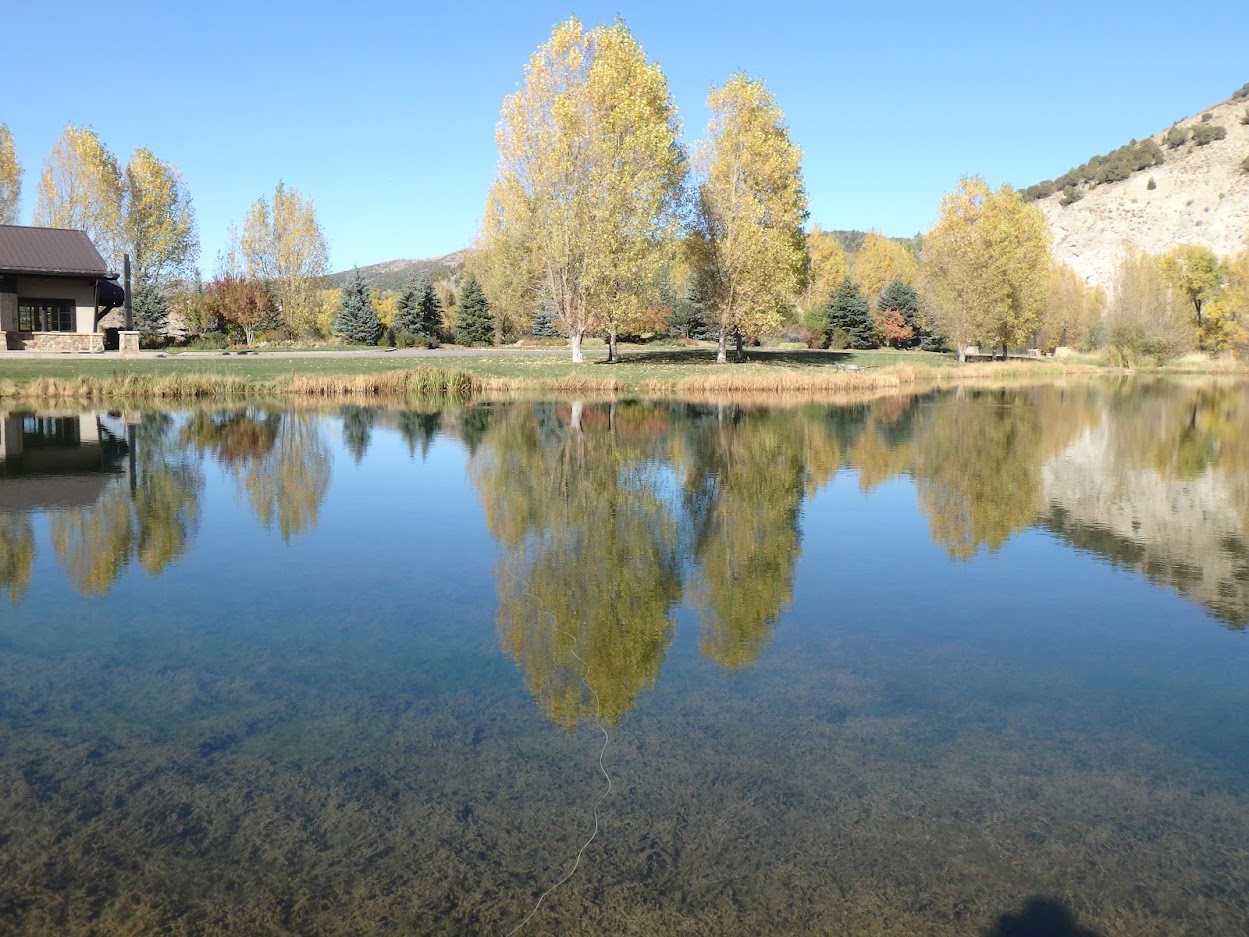 Our Sunday outing on the Frost Creek Pond was unexpected bonus time, and I thoroughly enjoyed the experience. Making long casts on the pond provided a rigorous test to my wrist, and it passed with only occasional twinges. The session gave me  confidence, that I could endure a day of fishing on Monday. My ability to sight fish to healthy fish was much appreciated, and my hunch on terrestrials proved to be a winner.