2019 has been the year to hike into backcountry creeks for this fly fisherman, and with a glorious fall day predicted for Wednesday, October 8, 2019, I decided to pay another visit to one of my favorites. Sub-freezing overnight temperatures caused me to take my time on Wednesday morning, and this translated to my arriving by the side of the stream by noon. The strategy paid off admirably, as I wore no additional layers, and the air temperature peaked in the low seventies during my three hours on the headwater creek. The flows were quite good for October, and clarity was gin clear. 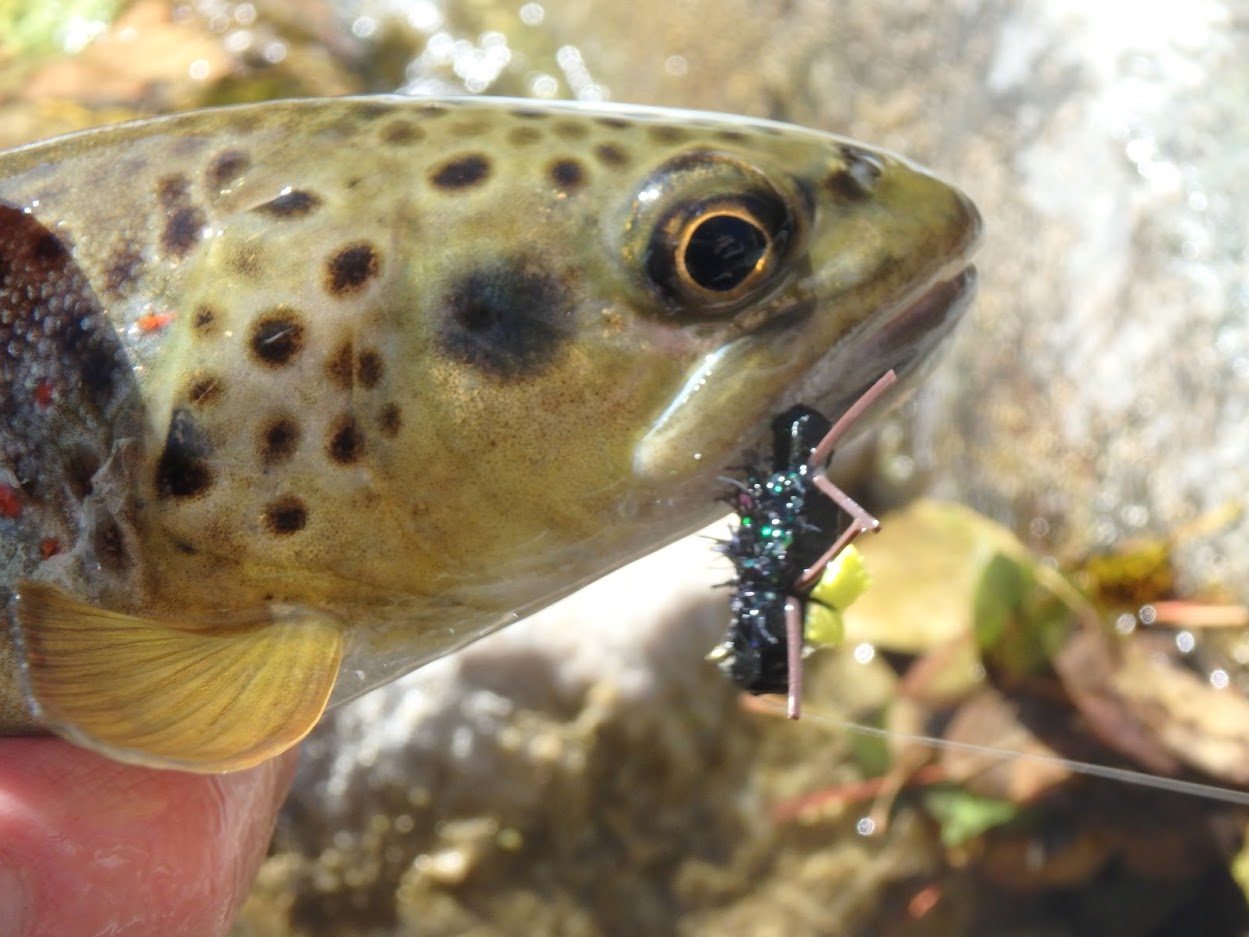 I began my effort to land some high country trout with a size 10 classic Chernboyl ant, and it did not disappoint in the early going. Very soon after my launch, the foam ant attracted the attention of a pair of average sized brown trout, and the catch rate was steady over the first hour, as I boosted the fish count to seven. Although I was pleased with this level of success, I also endured numerous refusals and even more temporary hook ups. The quick escape pattern caused me to execute my hook sets with more gusto, but even with that adjustment I lost a high percentage of fish. I concluded that a more significant factor was the tentative nature of the takes by the stream residents. 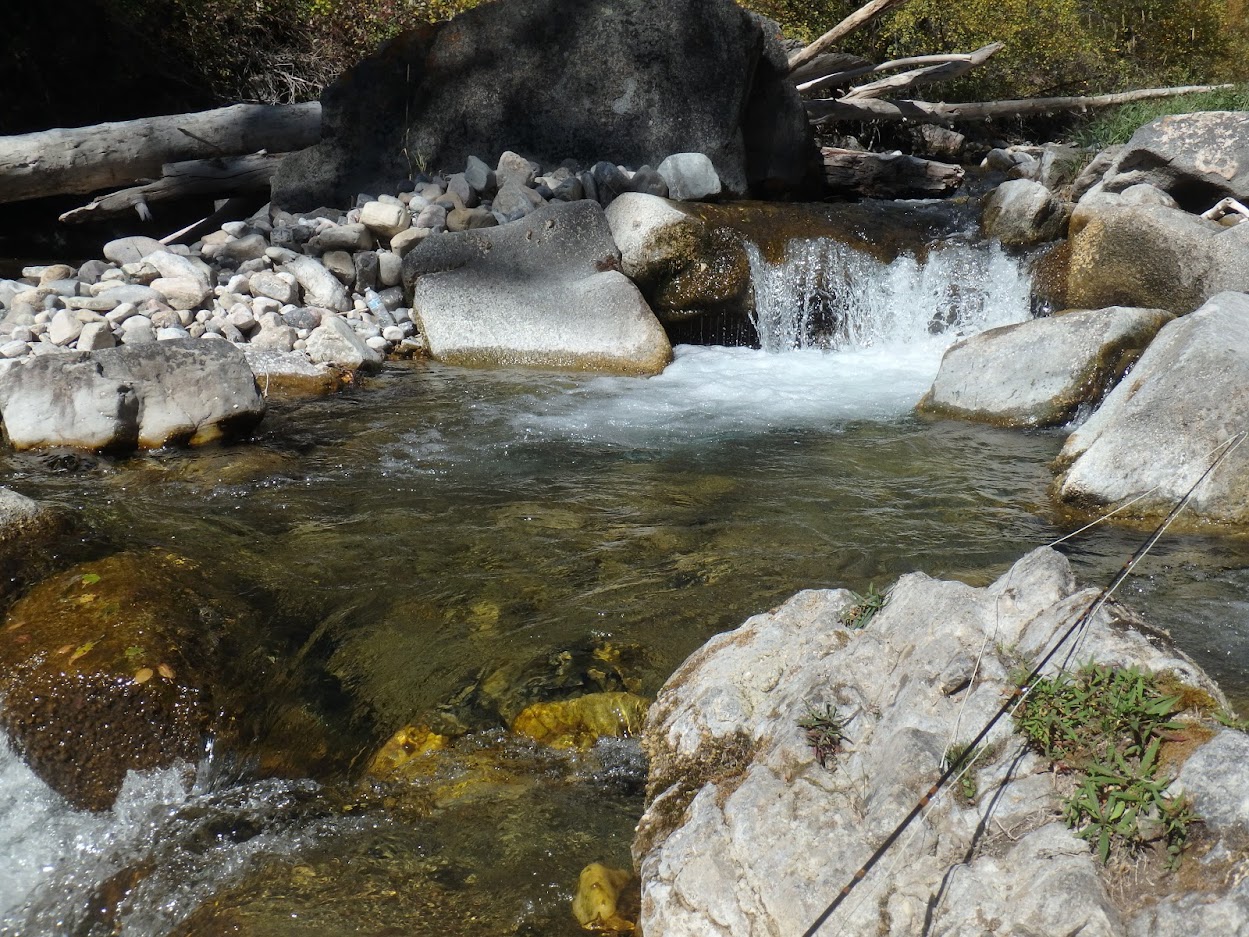 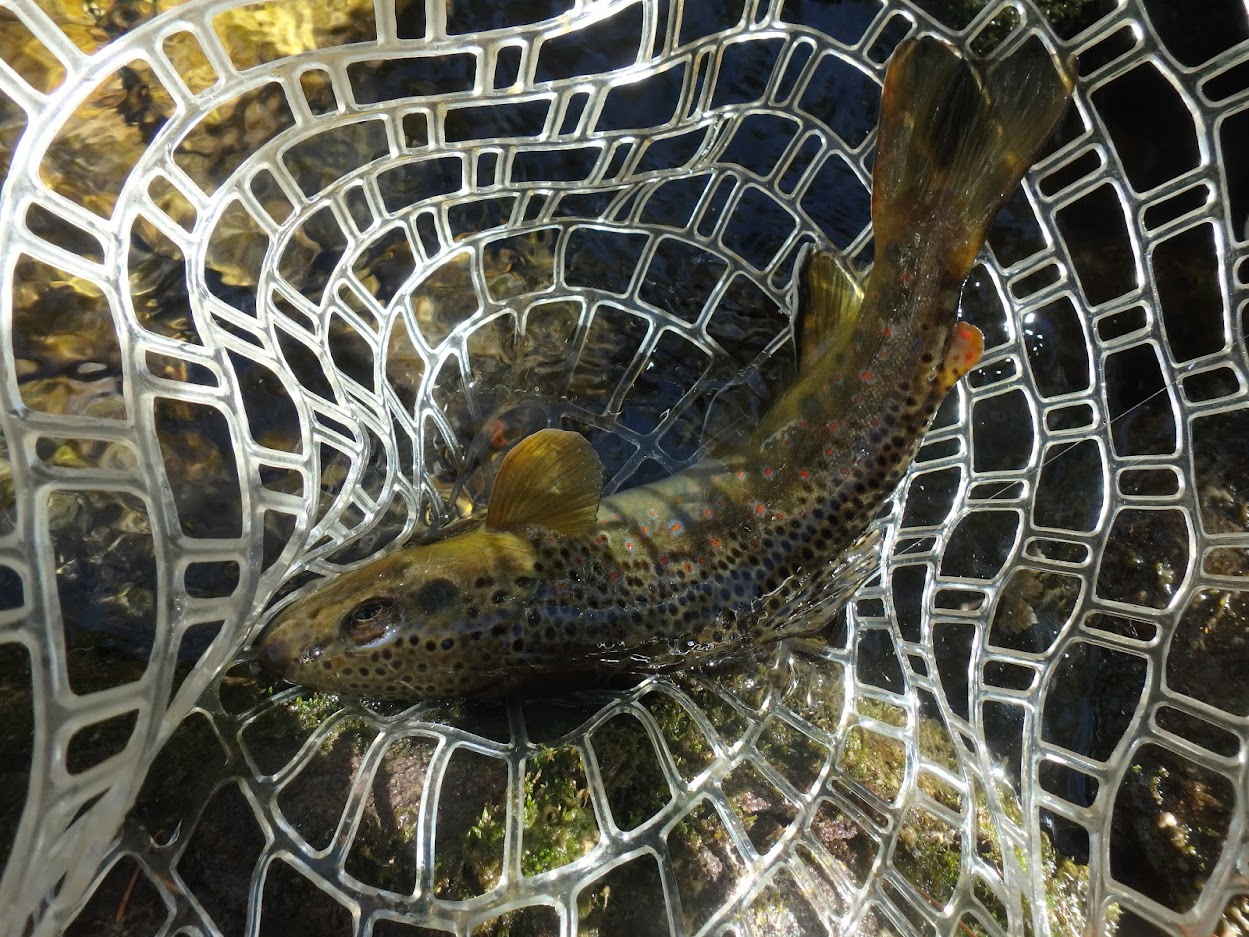 I decided to experiment with smaller terrestrials, and I configured my line with a size 12 Jake’s gulp beetle and a size 18 black parachute ant with a pink wing post. The double dry approach yielded a pair of decent browns, but the two flies seemed to attract less attention than the Chernobyl in prime pools. I only had three hours to fish on Tuesday afternoon, and the clock was ticking. I decided to make yet another change, and I analyzed the variables. The night time temperatures were considerably lower than my last visit, and this suggested that many of the terrestrials available several weeks earlier were no longer on the cafeteria buffet. The water temperature of the stream was certainly lower as a result of the colder nights, and the fish were likely holding deeper and feeding on subsurface fare. 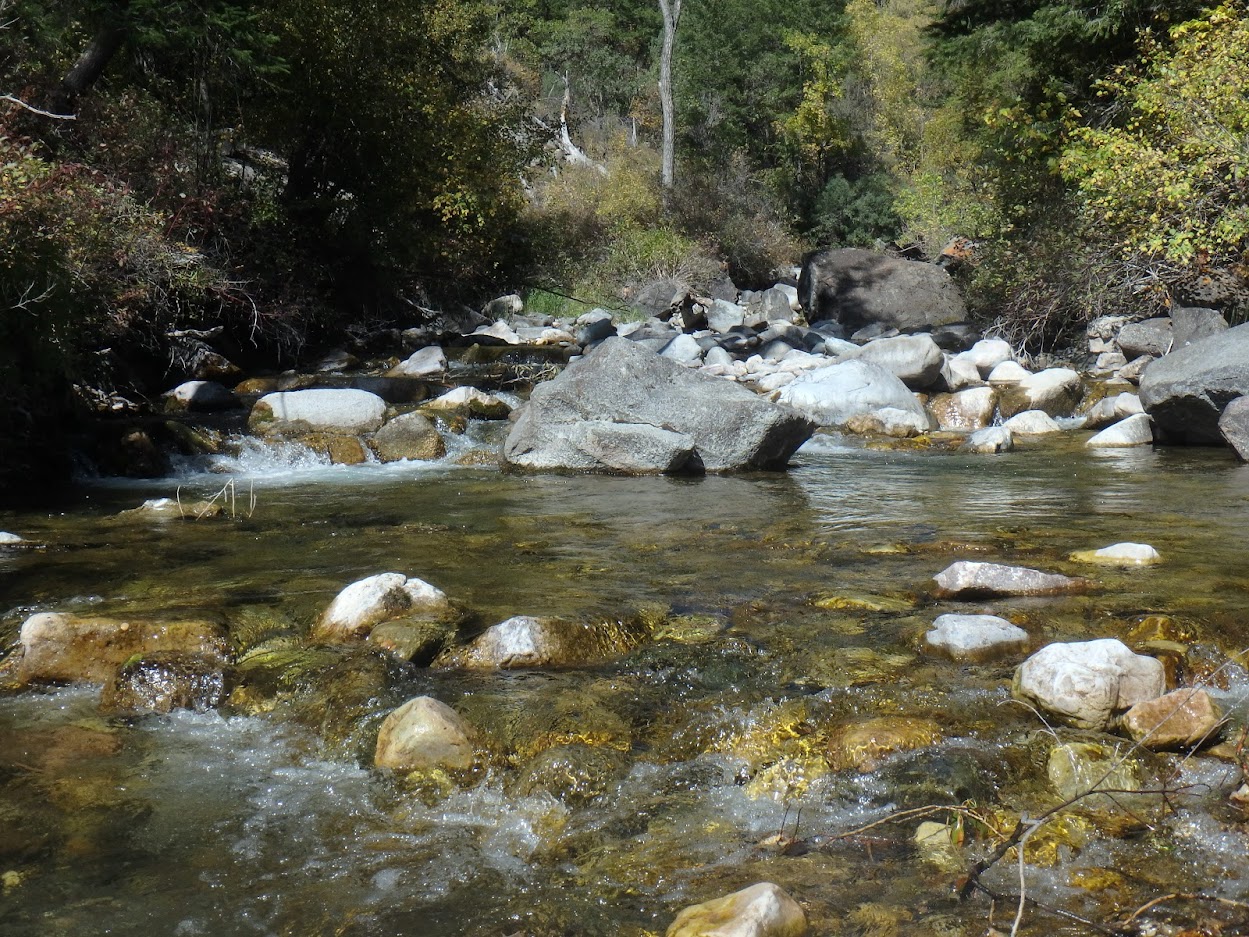 I plucked a peacock body hippie stomper from my fly box and knotted it to my line and tied a four foot length of 5X tippet to the bend. During my last visit the salvation was the most popular nymph, so I executed a clinch knot and dangled the shiny offering behind the stomper. The adjustment was magical, and suddenly the catch rate accelerated. In addition to faster action the average size of the landed fish swelled. 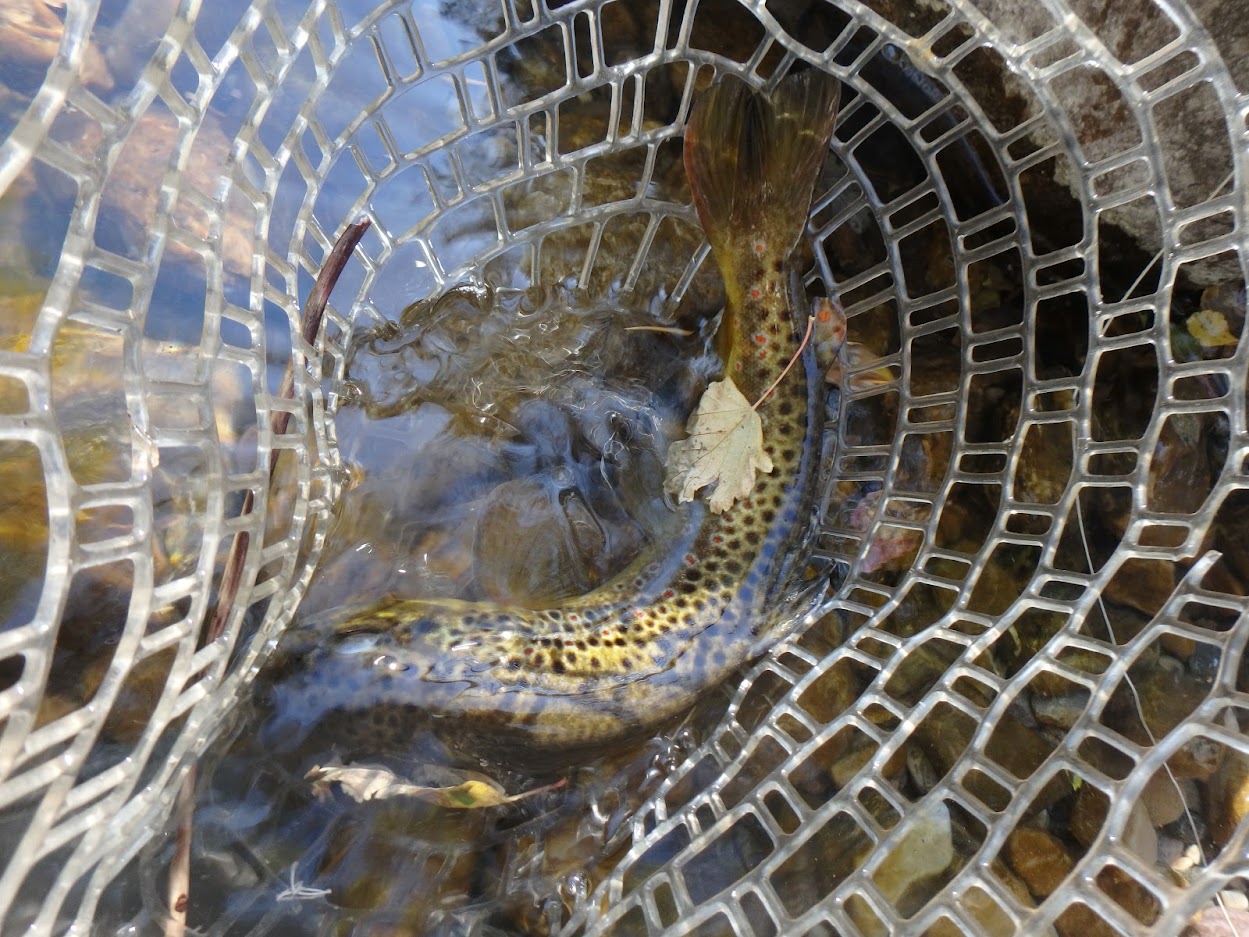 I spent the last 1.5 hours tossing the two fly dry/dropper combination in gorgeous deep pools, and the fish count leaped from nine to twenty-three. Most of the trout snatched the salvation on the swing or lift, but a decent number of wild residents also lurched to the surface to crush the hippie stomper. I moved at a fairly rapid pace and plopped the dry/dropper in prime spots and relished the fast action on the small stream. Very still shelf pools were particularly productive, and in several instances I plopped the hippie stomper and allowed it to sit motionless for a few seconds, before a brown trout rocketed to the top of the water column to slurp the foam attractor. 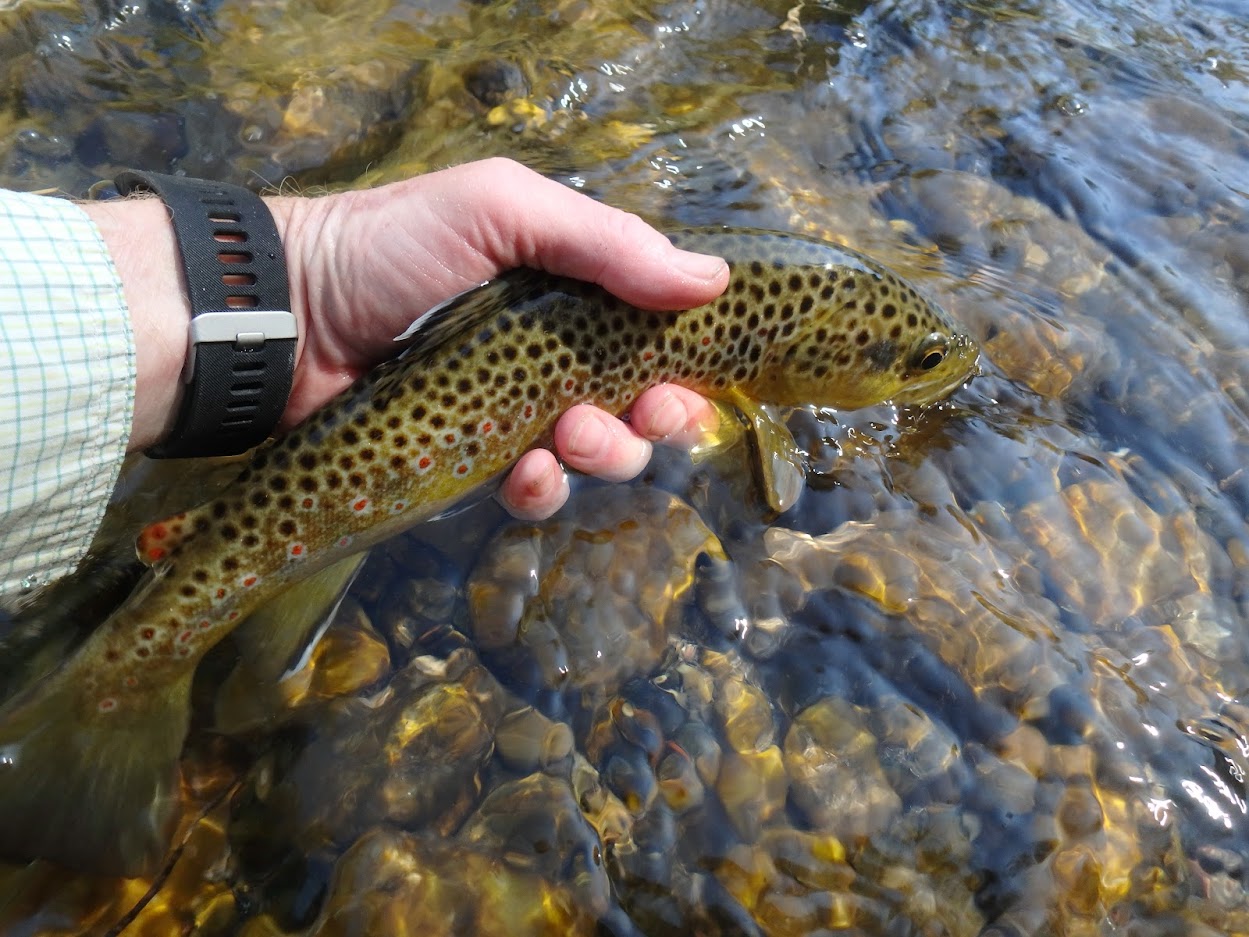 Those Ink Spots Are Vivid

The salvation was very effective, as it drifted along the bank or current seams, or when I began to lift at the tail of pools. I estimate that five trout chose the surface fly, and the remainder grabbed the trailing nymph. Tuesday was simply three hours of perfection. The air temperature was ideal, the impact of wind was minimal, I endured minimal snags and tangles, and the glow of the golden leaves and shrubs along the creek was spectacular. My streak of good fortune on the small headwater stream continued uninterrupted. A winter storm is predicted for Thursday, and cold temperatures are forecast for the aftermath, but a warming trend could draw me back for another outing before winter permanently establishes its footprint on 2019. 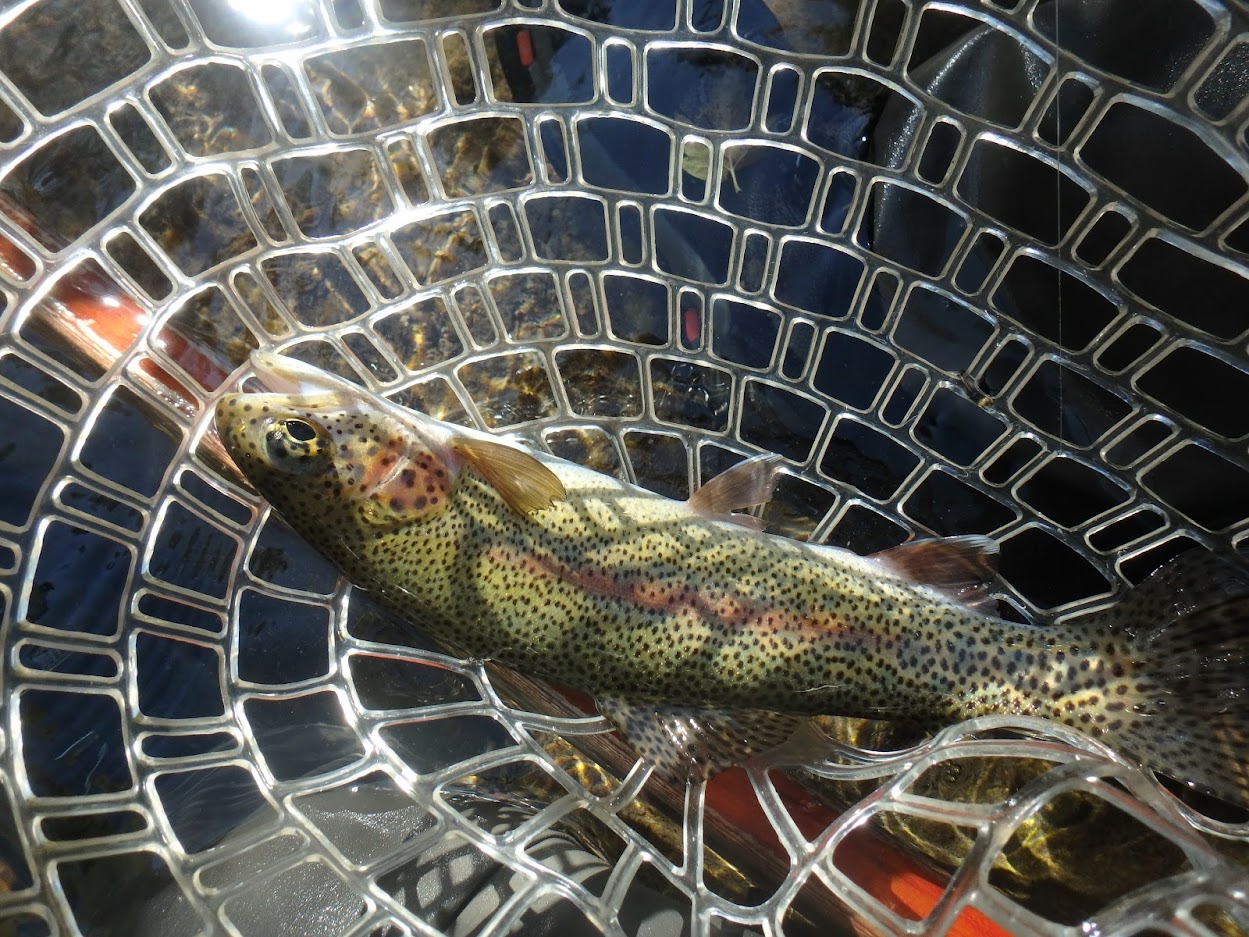 The Only Rainbow Trout