Location: Between Avon and Edwards

When I returned to the Santa Fe after prospecting Brush Creek for an hour, I heard my phone ringing. I quickly hit the green accept button and heard the voice of Dave G. We agreed to meet at the Grand Avenue Grill, as that was a convenient point along our route to the Eagle River between Edwards and Avon. Since I planned to continue on to Denver upon the completion of our time on the river, we drove separately.

We pulled into a nice wide pullout along US 6, and since both of our rods were assembled and ready for action, we immediately hiked along a path to the river. Dave configured his line with a strike indicator, beadhead pheasant tail and RS2 and immediately charged into the tantalizing long run next to our position. I, meanwhile, pulled my small lunch from my backpack and quickly snacked on a sandwich, carrots and yogurt.

Clouds began to dominate the sky during the afternoon, and this change in weather was accompanied by a constant chilling breeze. I pulled on my raincoat to trap body heat and serve as a windbreaker, and it was partially effective. I suspect the temperature along the Eagle River never spiked higher than 54 degrees.

After lunch I grabbed my Orvis Access four weight that was already equipped with a hippy stomper and iron sally, and I began exploring the nice riffle of moderate depth below the large pool that Dave G. occupied. This endeavor occupied me for fifteen minutes, and although I was unable to coax any fish into my net, I did generate one very brief connection in the frothy water, where the river spilled over some large rocks at the top of the riffle.

Convinced that I thoroughly covered the area below the pool, I scrambled over the rocks at the lip and waded along the shoreline, until I was opposite the mid-section. I paused on the beach and observed for five minutes, and during this time I noticed four very sporadic rises from different fish spread out in the center of the pool. 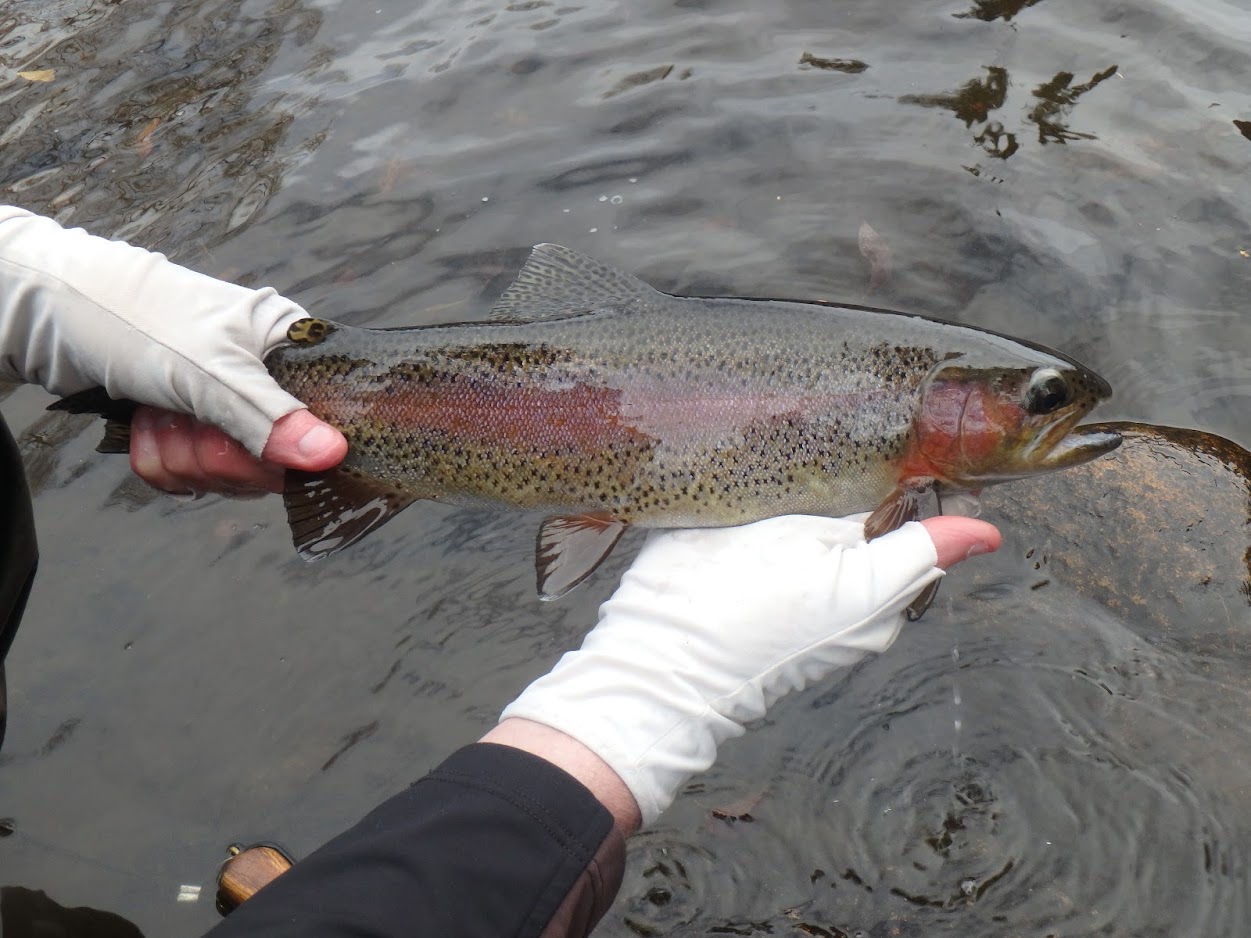 I decided to begin my quest for trout and waded into the pool, until I was mid-thigh deep in cold river water. I began to lob casts with the two fly dry/dropper, although I was not very confident that the large hippy stomper would attract attention. It was at this time that I glanced at Dave G. and noticed a huge bend in his rod. I stripped in my line and waded back to shore, so I could photograph his catch, which turned out to be a splendid rainbow trout in excess of fifteen inches. Dave G. proudly displayed his catch and informed me that it was fooled by a pheasant tail nymph.

When I returned to the middle of the pool, the pace of rising fish accelerated, so I removed the hippy stomper and iron sally and tied a tiny size 24 CDC blue winged olive to my line. I began shooting casts above the scene of the rises and utilized downstream drifts over the target locations. Normally this technique is fairly routine, but the upstream blasts of wind made it nearly impossible to locate the tiny speck of fluff that served as my fly, and I was unable to flutter the fly down with any amount of slack to counteract drag. 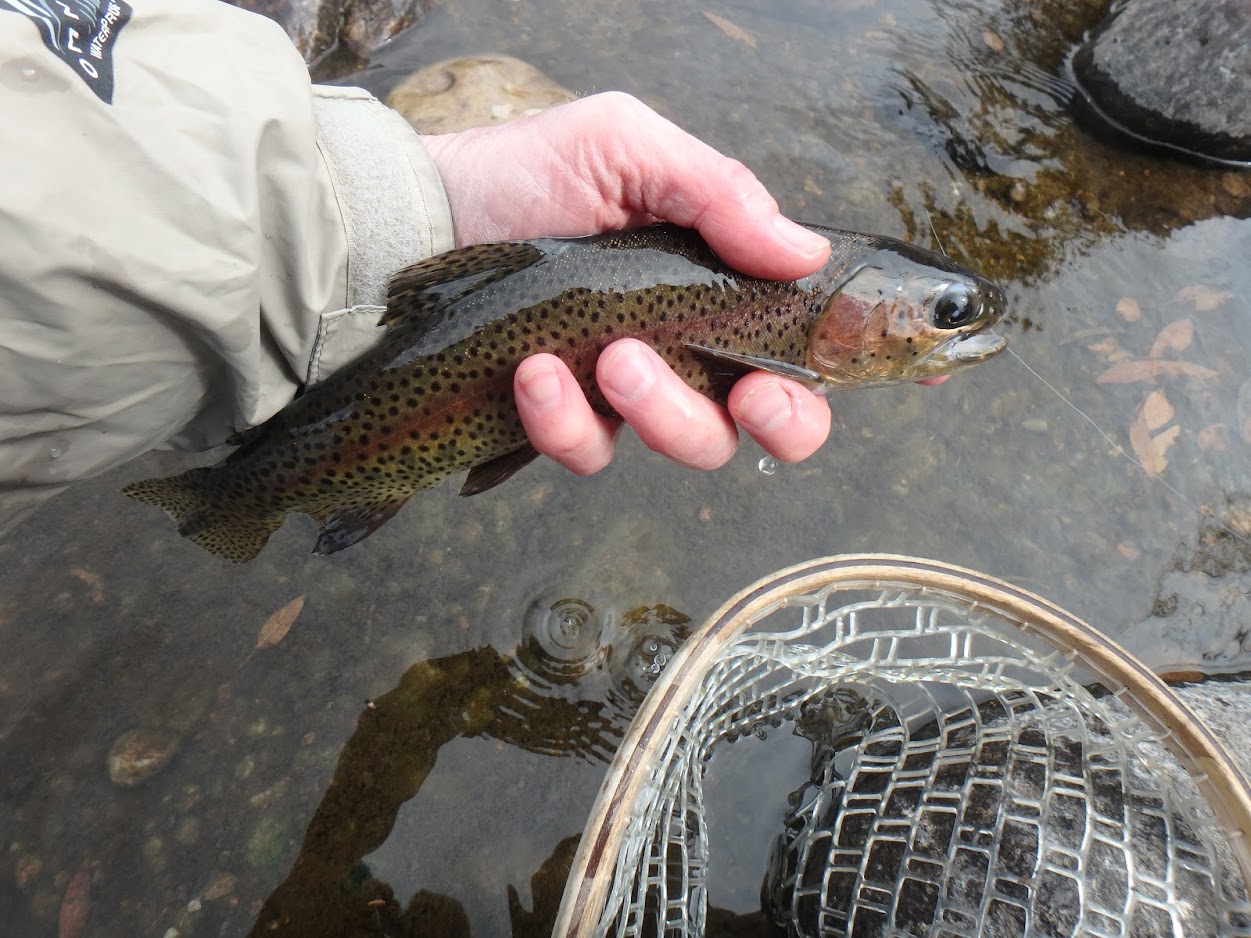 Nonetheless on the tenth drift I miraculously tracked the baetis imiation and saw a subtle sip, whereupon I lifted the rod tip and hooked a hard fighting twelve inch rainbow trout. I was very pleased to enjoy this modest success under some fairly adverse conditions.

I took time to dry the fly and my hands and to fluff the matted CDC wing. I pivoted to survey the river, and the feeders in the center of the pool remained active, so I reclaimed my previous position. During this foray into the river I focused on a pair of feeders directly across from me. They were sipping naturals in a nice regular rhythm, so I lengthened my line and fired casts toward a seam closer to the far bank. On the fifth drift a bulge appeared under my speck of a fly, and I once again reacted with a confident set. This fish immediately streaked upstream and then down, and it was evident, that I had a larger foe on my line. 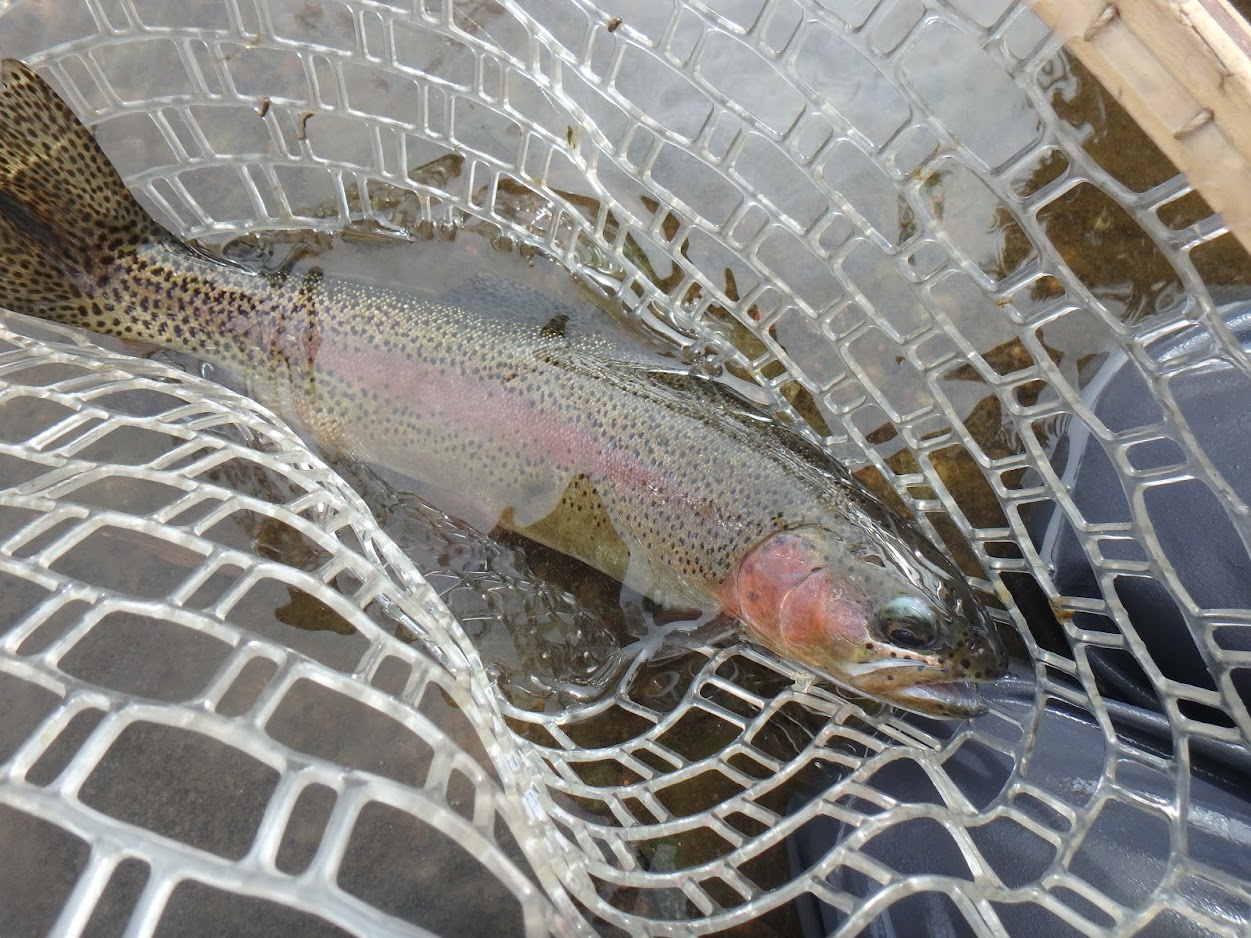 I maintained constant pressure, and after several additional spurts, I lifted the scarlet head of a chunky fifteen inch rainbow trout and guided it into my net. As expected I was very pleased with this sudden dose of good fortune, and I carefully removed the fly and snapped a series of photos of my prize catch of October 26.

Again I meticulously blotted the fly, doused it in dry shake, and fluffed the CDC wing. I waded back toward the middle but took a few steps downstream toward the tail. This placed me closer to a small pod of risers fifteen feet below my previous casts. The fish in this area hovered just below some swirly water, and this made following my fly even more of a challenge. Nevertheless I persisted, and on the tenth cast I spotted a sip in the neighborhood of where I estimated my fly to be. I raised the rod tip and connected with another twelve inch rainbow. 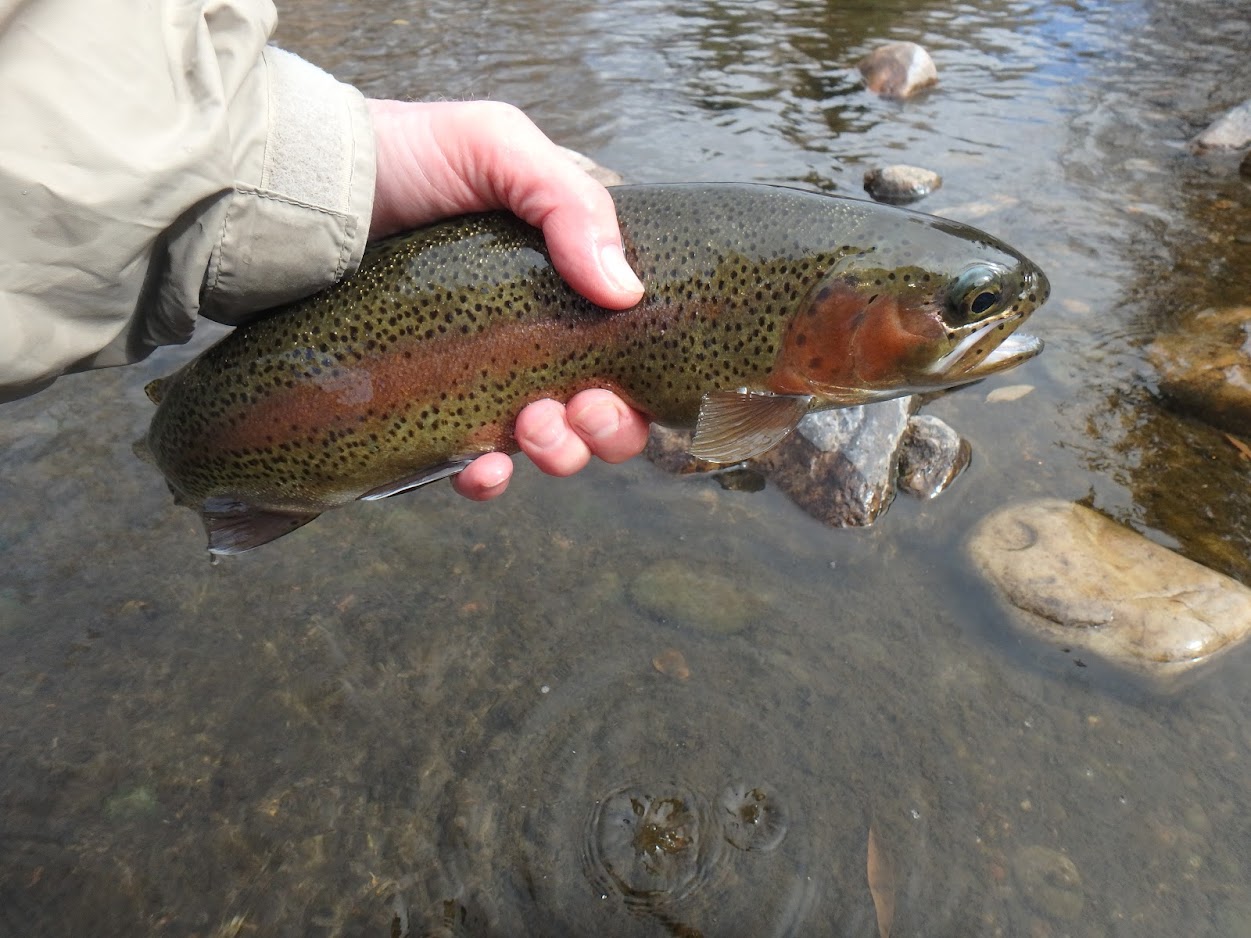 My confidence was now soaring, but the wind accelerated, and the trout seemed to eat in waves. I waited out a brief feeding lull, while I tended to refurbishing my fly, and then some subtle surface disturbances resumed. I targeted one of the more frequent feeders, but after three cycles of catch, dry and fluff; I was unable to track the size 24 CDC BWO. I remembered some Klinkhammer emerger style BWO’s that I tied over the winter, so I located one in my fly box and replaced the CDC BWO. On the fourth cast another rainbow lurched to the surface to sip my fly, and again I scooped a twelve inch rainbow into my net.

The white poly wing post on the emerger was much easier to track than the gray CDC wing of the previous fly, and I was pleased to enjoy some early success. My confidence elevated, and I began to shoot casts to the pod of risers across from my position. I allocated another thirty minutes to the emerger with the white wing post, but it was rudely ignored. Perhaps it was too large or maybe the wind made achieving a drag free drift impossible, but eventually I surrendered to the selective fish in front of me.

Again I pondered the situation, and I remembered some 2017 success in a similar situation with a Craven soft hackle emerger fished in the surface film. Again I searched my fly box and found a size 22 emerger with no bead, and I applied a sufficient layer of floatant to the body and wing. My optimism increased, as I waded to the tail of the pool in order to obtain improved lighting and a better casting angle to some of the lower risers.

The thought process was sound, but the remaining thirty minutes of casting delivered only frustration. The low riding small wet fly was nearly impossible to track, so I opted to set the hook upon seeing a rise in the vicinity of where I estimated my fly to be. This was my only option, but it was not effective. The wind continued to gust, and my feet morphed into stumps, and my body began to shiver. My watch displayed 3PM, and I decided to conclude my day on the Eagle River.

In two hours of fly fishing I landed four rainbow trout including a very respectable fifteen incher. I was pleased to have rising fish in front of me for nearly my entire time on the Eagle River. It was a successful outing, but the wind and cold became intolerable. Friday was a fairly typical day of autumn fly fishing.