Location: Between Avon and Edwards, CO

This blog post is a bit of a deviation from the norm, as it describes a few hours of guiding rather than fly fishing. My sister-in-law and brother-in-law from Atlanta, Ga. invited us to spend a night at their plush time share unit at the Timbers in Bachelor Gulch, and we eagerly accepted. We chose Wednesday and Thursday, June 27 and 28 as our designated days to visit the Vogels. Their daughter, Jennifer, and son-in-law, Kerby, and grandson, Mason, were also staying at the condo.

Before we departed, Jane texted the Vogels to inform them of our planned activities. She communicated my desire to spend three or four hours on the Eagle River on Thursday. Much to my surprise I received a prompt reply text message from my brother-in-law, Bill, who expressed a desire to fly fish on Wednesday afternoon. Apparently Kerby and Jennifer were the main driving force behind this plan. I agreed to accompany and guide them, if they took care of equipment rental and purchased Colorado fishing licenses.

Originally we planned to be on the river by 1PM, but by the time everybody tried on waders and boots and filled out the fishing license paperwork, our starting time lagged into three o’clock. I was hoping to catch the yellow sally and pale morning dun hatch in the early afternoon, but once I realized that the group would not be ready until later, I modified my initial choice of fishing destination to a location no more than five miles from the Timbers condominium complex.

Bill, Jennifer and Kerby rented waders, boots, and two rods and reels. I showed them how to string the rods, and then provided an impromptu casting demonstration and lesson along the edge of the river, before I tied flies to their lines. Jennifer and Kerby never fly fished previously, and ten minutes of casting practice advanced their skills minimally, but I judged that they could probably execute some twenty foot casts.

I paused to observe the pool next to us, and surface activity was lacking, so I quickly decided to start them off with a nymphing configuration. I was fairly confident that they could sling a line adorned with a strike indicator and split shot to the current seams, and I was certain that quite a few trout occupied this prime location. In fact I was a bit surprised that we had the area to ourselves. 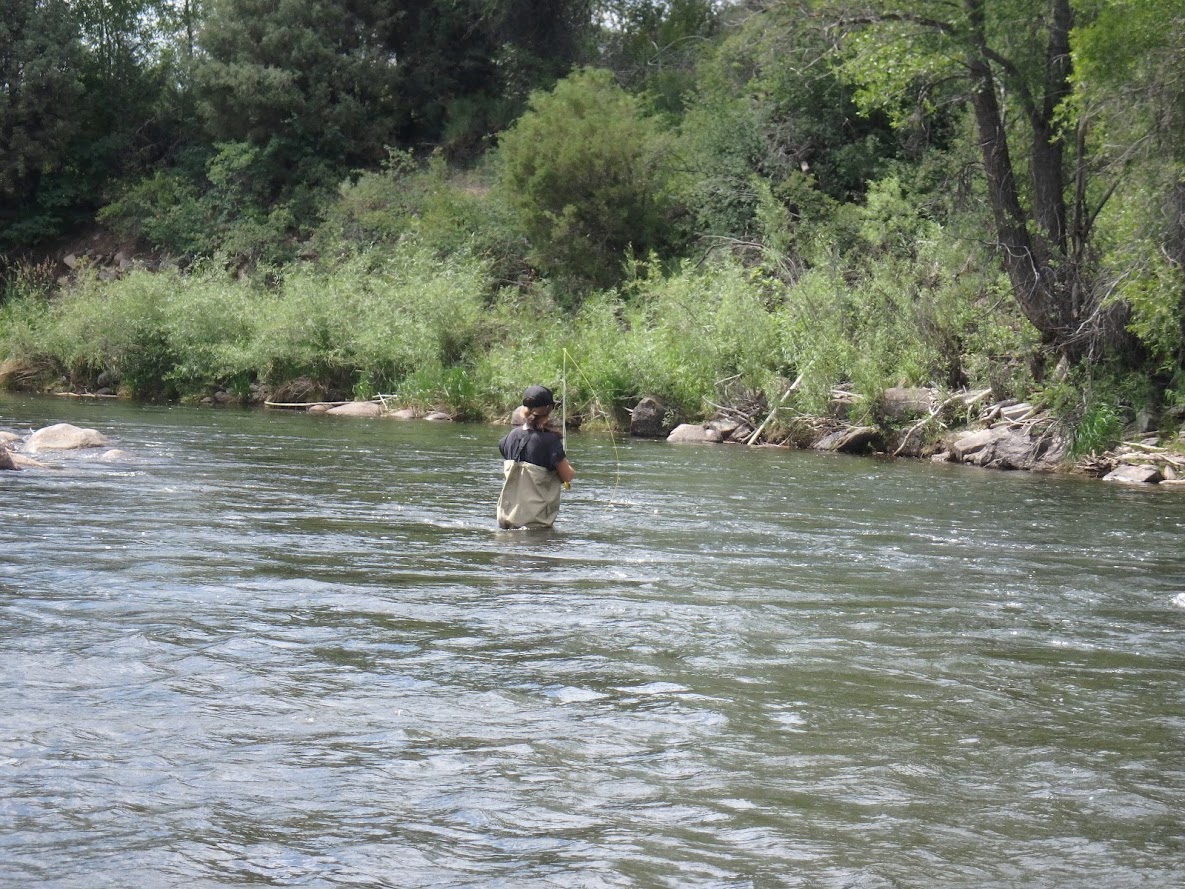 I began with Jennifer and led her to the tail of the pool. I started her off with a size 16 iron sally and a beadhead soft hackle pheasant tail. Clearly I was playing the yellow sally and pale morning dun card. I spent fifteen or twenty minutes instructing Jennifer, but we were unable to generate action, so I left her on her own, while I waded to shore and worked with Bill. 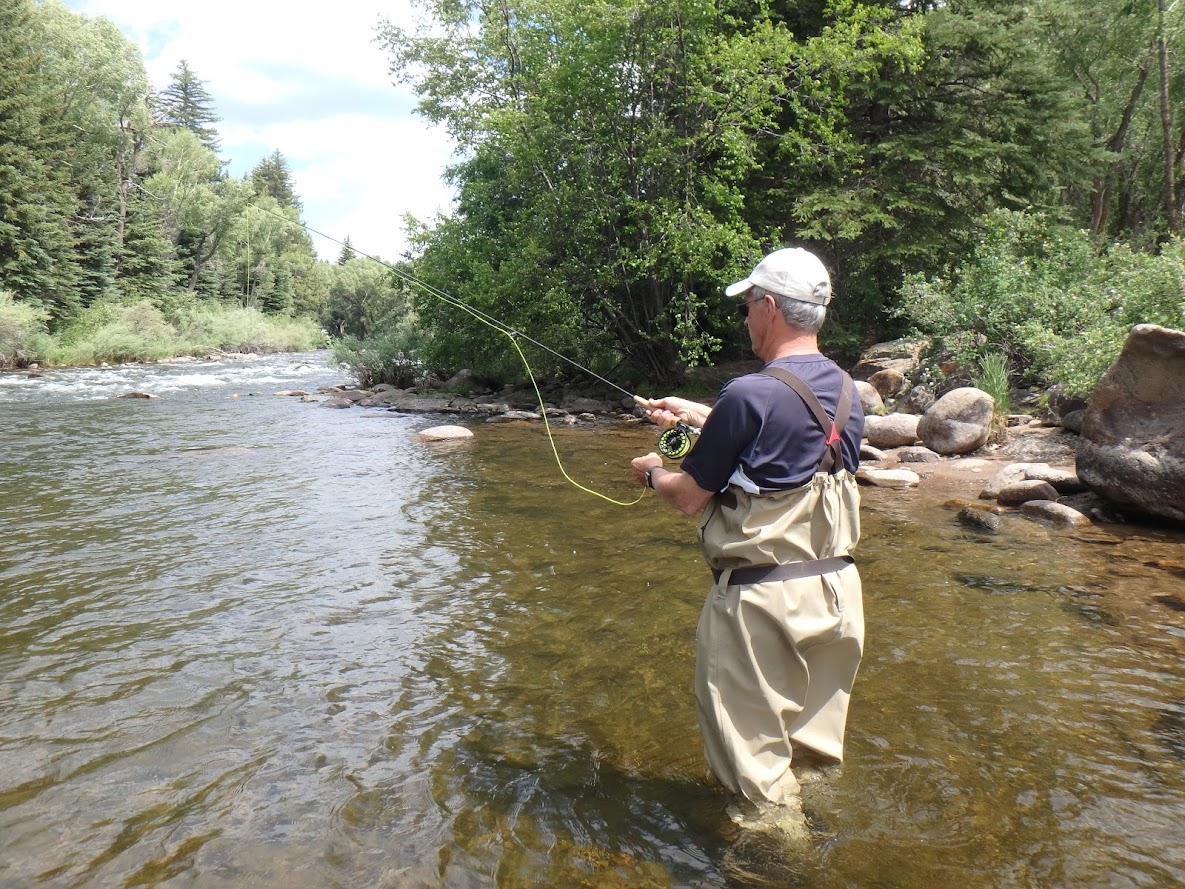 I decided to position Bill at the top of the pool, where a strong current spilled over some large rocks, and this structure created a quality shelf pool. I knew from past visits that several fish occupied this prime location. Once I had Bill positioned within fifteen feet of the juicy current seam, I scanned the water, and I was pleased to observe some surface action. In fact a decent rainbow trout was visible no more than eight feet to the left of Bill in a deep depression in front of a large submerged rock. I decided to skip the time consuming task of configuring Bill’s line with an indicator and nymphs, and instead I knotted a light gray deer hair caddis to the line.

Bill executed some nice drifts over the rainbow, and as this scenario unfolded, I also noted additional rises along the current seam and fifteen feet upstream behind another large boulder. Bill was rather pleased to actually see his target fish and in fact became quite obsessed with hooking the active feeder. Unfortunately our quarry was quite selective, as we cycled through at least four fly changes, but Bill was unable to fool the rainbow. We tried two deer hair caddis with gray and olive-brown bodies along with a size 14 yellow stimulator and a parachute ant. While the parachute ant was attached to Bill’s line, he cast toward the deep current seam, and a brown trout swirled on the terrestrial. Bill’s untrained eye never saw the take, and by the time I yelled set and grabbed his arm to lift and set, the fish disappeared to the depths.

I looked downstream to check on Jennifer and noticed that she was joined by Kerby, and they were wading back toward the shoreline. I quickly left Bill on his own and met the couple, as they raised their line to display the most intense tangle that I ever witnessed. I jumped into the recovery effort and removed the strike indicator and split shot and cut off the two flies. I spent ten minutes attempting to unravel the tag end of the line and made some small progress, before I surrendered to the monofilament gods and removed the entire tapered leader. I handed the snarl to Jennifer, while I pulled a pack of tapered leaders from my front pack, and I began the task of unraveling a fresh leader to attach to the rental line.

The fishing gods looked upon us with favor, and before I could uncoil the new leader, Jennifer miraculously untangled the mess. Apparently having access to two free ends facilitated the process. I used a loop to loop connection to reattach the line, and then Kerby and I waded back to the tail of the pool, while Jennifer joined her father in an attempt to dupe the rising fish at the top of the pool. 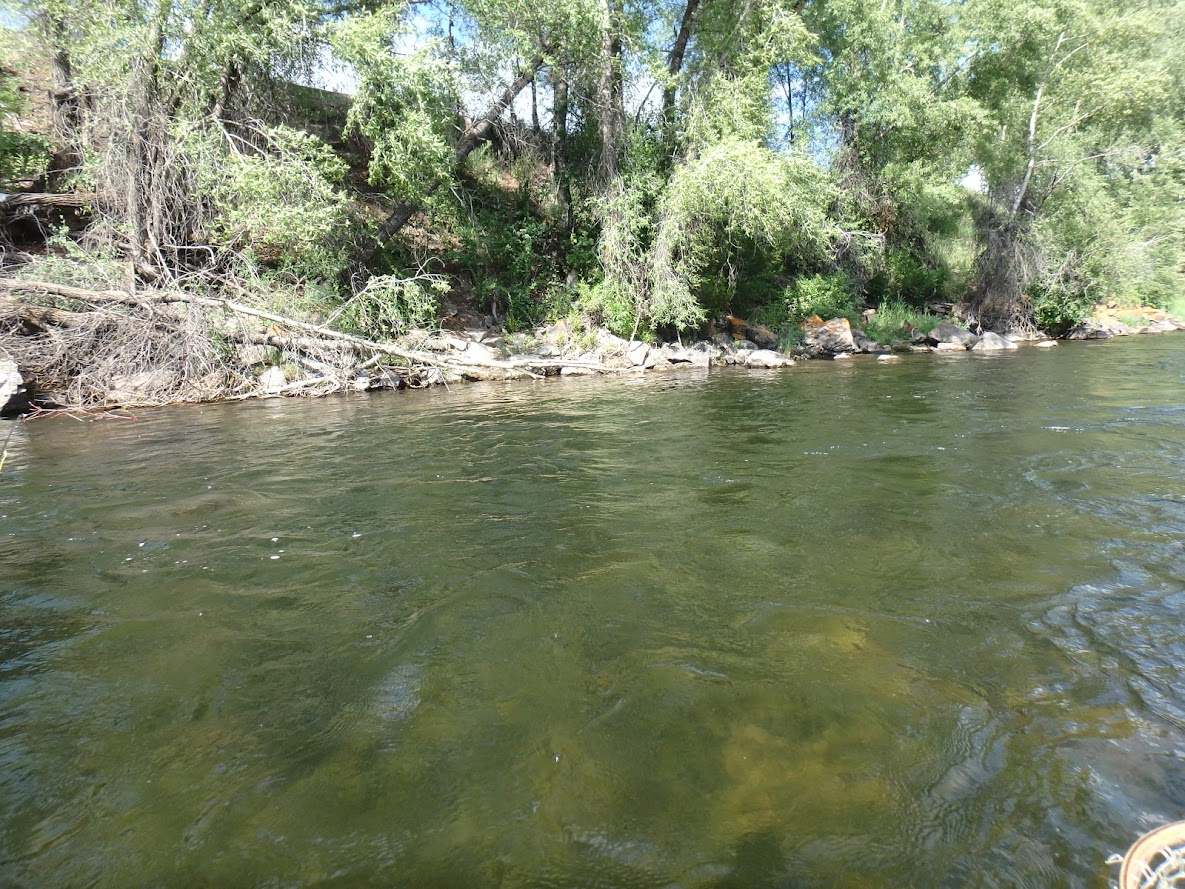 Kerby’s Trout Came from This Area

Kerby is probably 6′ 2″, and this extra stature enabled him to wade closer to the opposite bank than was possible for Jennifer. As we moved into an advantageous position, several fish made their presence known, as they created subtle rings on the river surface. In fact the feeding activity accelerated over the next thirty minutes, and we observed at least six fish actively feeding in the area. Given the surface action I decided to remove the nymphing paraphernalia from Kerby’s line, and I set him up with a single size 16 gray deer hair caddis.

When Kerby spotted the array of rising fish along the far bank, I could see his excitement increase. Initially his casting prevented him from obtaining a solid drift over the risers, but eventually the possibility of hooking a visible fish elevated his casting skills and also seduced him into wading closer to facilitate shorter casts. I noticed that his casts were landing quite a distance above the fish that fed steadily, and consequently line drag caused an unnatural drift by the time the fly reached the target feeding area. I demonstrated mending, and he adopted the line flipping technique with reasonable proficiency. 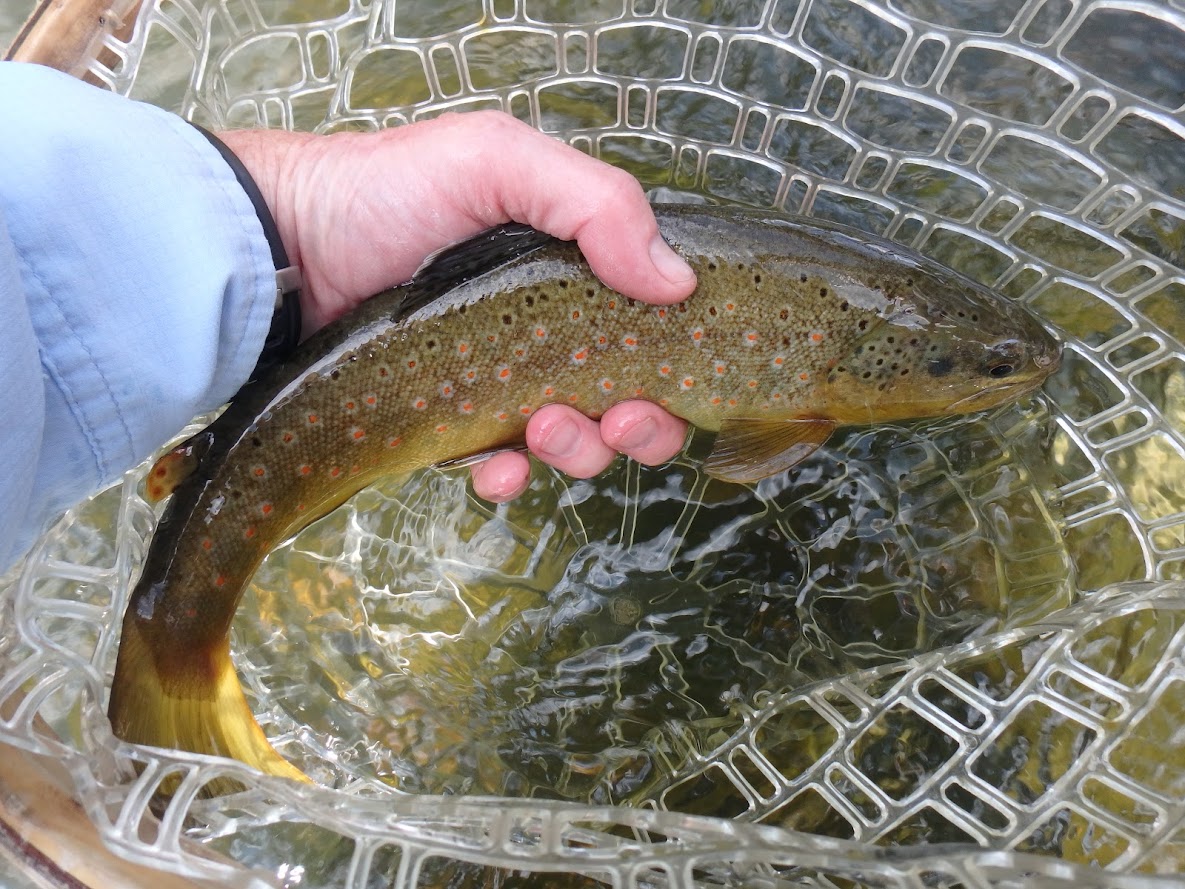 My Nephew Did Well

After fifteen minutes of practice and twenty drifts, Kerby finally applied all his lessons, and a trout slashed at and ate the adult caddis imitation! We were beyond excited, and now I attempted to provide on the job training on playing a fish. The fish dashed about in short spurts and executed numerous head shakes and rolls. I continually cautioned Kerby to allow the fish to pull out line, if the counter pressure was too great, but miraculously the finned foe eventually tired, and I was able to slide my net beneath it. High fives erupted and cheers cascaded from the shoreline observers, which now included Jane and her sister Judy. I was more excited, than if had I caught and landed the fish myself. 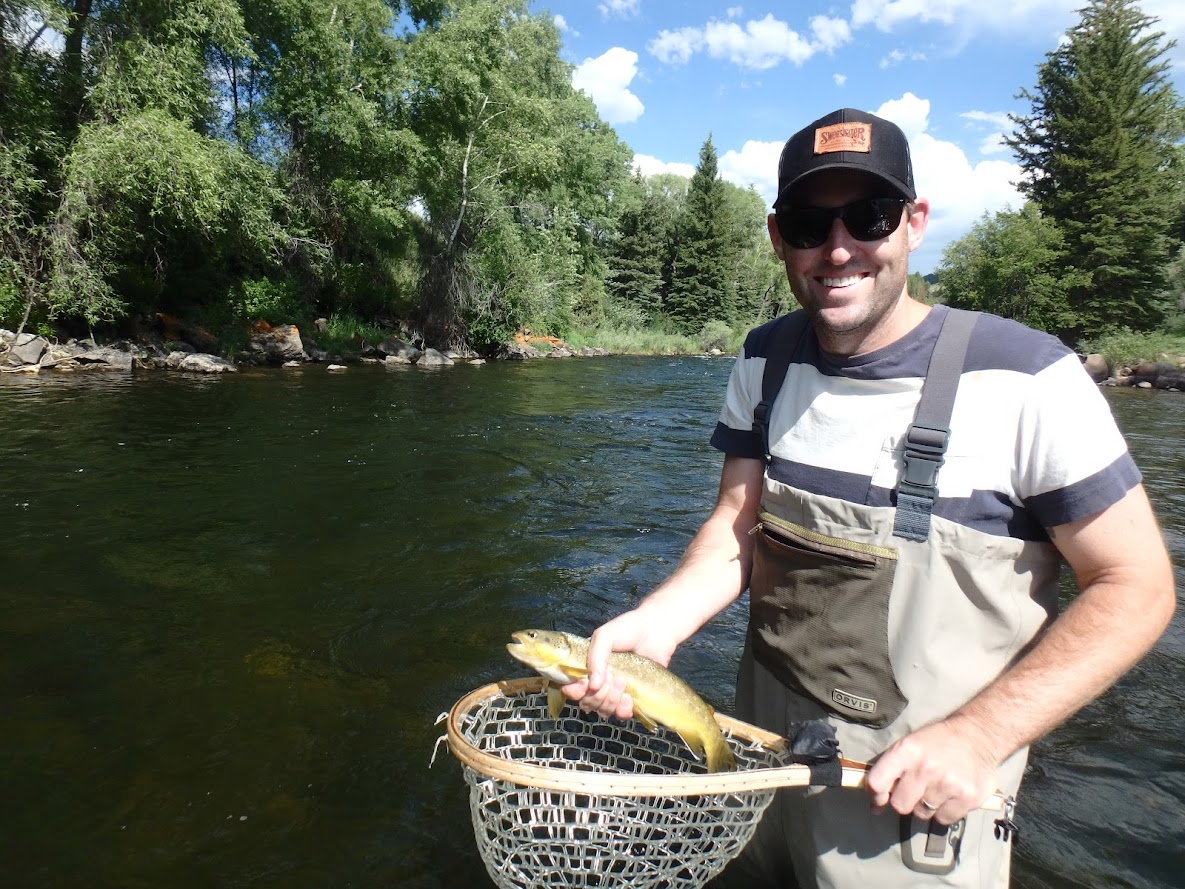 I gently reached into the net and removed the caddis fly and then snapped a few photos in case the thirteen inch brown trout escaped, before I could stage additional shots with Kerby. After I obtained my safety stock of photos, I handed the net to Kerby, and clicked a few of him holding the prize catch, and then I tapped the video button and recorded the release. Kerby was beaming, and as expected he was very anxious to cast to the remaining feeders in the area. I stayed with him for another fifteen minutes or so, and we changed flies several times, but for some reason we could not repeat the earlier success.

Once again I shifted gears and left Kerby with the lower pool risers, while I returned to the top of the pool. By now Bill relinquished the rod to Jennifer, so I joined her and assisted in her efforts to fool the rising rainbow trout, that Bill attempted to catch earlier. Once again I cycled through a series of fly changes for Jennifer, but alas our educated companion would not be deceived. I even knotted a Jake’s gulp beetle to the line and then added a salvation nymph dropper, but this ploy was also soundly rejected.

We had dinner reservations at a restaurant on Wednesday evening, so by 5:30 we reeled up the lines, removed the flies and returned the equipment to the fly shop in Avon. It was a fun 2.5 hours, and Kerby, Jennifer and Bill repeatedly thanked me for guiding them and expressed how much they enjoyed being in a crystal clear mountain stream in the Rocky Mountains. When I paused to reflect, I realized how astute their observations were.