After a successful day on the South Platte River on 06/04/2020 Jane and I planned a return visit on June 11. Of course that was before I checked the DWR flow data on Wednesday evening and discovered that the water managers opened the taps which resulted in a spike from 150 CFS to 275 CFS. I was tempted to follow through on the original plan at the higher level; however, I read an online report, that suggested it would take several days for the trout to settle in to a new comfort zone. Since our trip was planned for only a day or two after the spike, we modified our plans. I searched all my Colorado options, and other than some tailwaters that required an overnight stay, I was forced to consider lakes. I pondered several options, but my mind continually returned to my Tuesday outing at the Davis Ponds and the non-stop action that entertained me for two hours on a cold and blustery afternoon. I was confident that the stocked fish remained in place, so why not return on a pleasant spring day to see if the trout remained in a hungry state of mind. 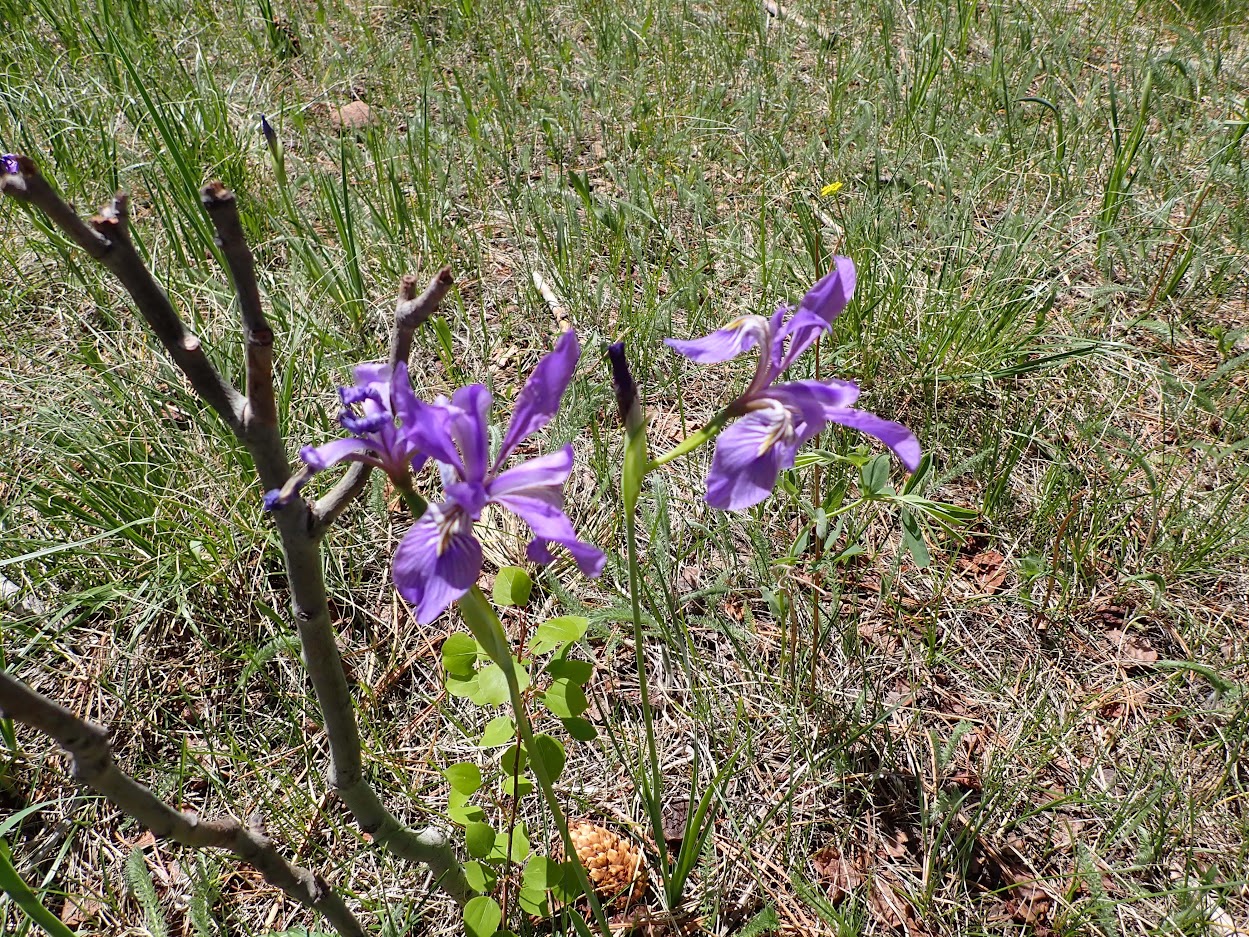 Since Jane graciously agreed to accompany me, we decided to complete a hiking loop, before I embarked on my fly fishing gambit. The three mile amble through the spaced out pines and green meadows took us past some historic cabins and returned us to the parking lot, where we stuffed our lunches in our backpacks, and I grabbed my fishing gear. We hiked another 1.2 miles to a picnic table overlooking the lower pond, and we relaxed and enjoyed our lunches. Ten anglers were spaced around the lower pond, and for some reason the downstream option seemed more popular than the upper. This was the opposite scenario from that observed on Tuesday. 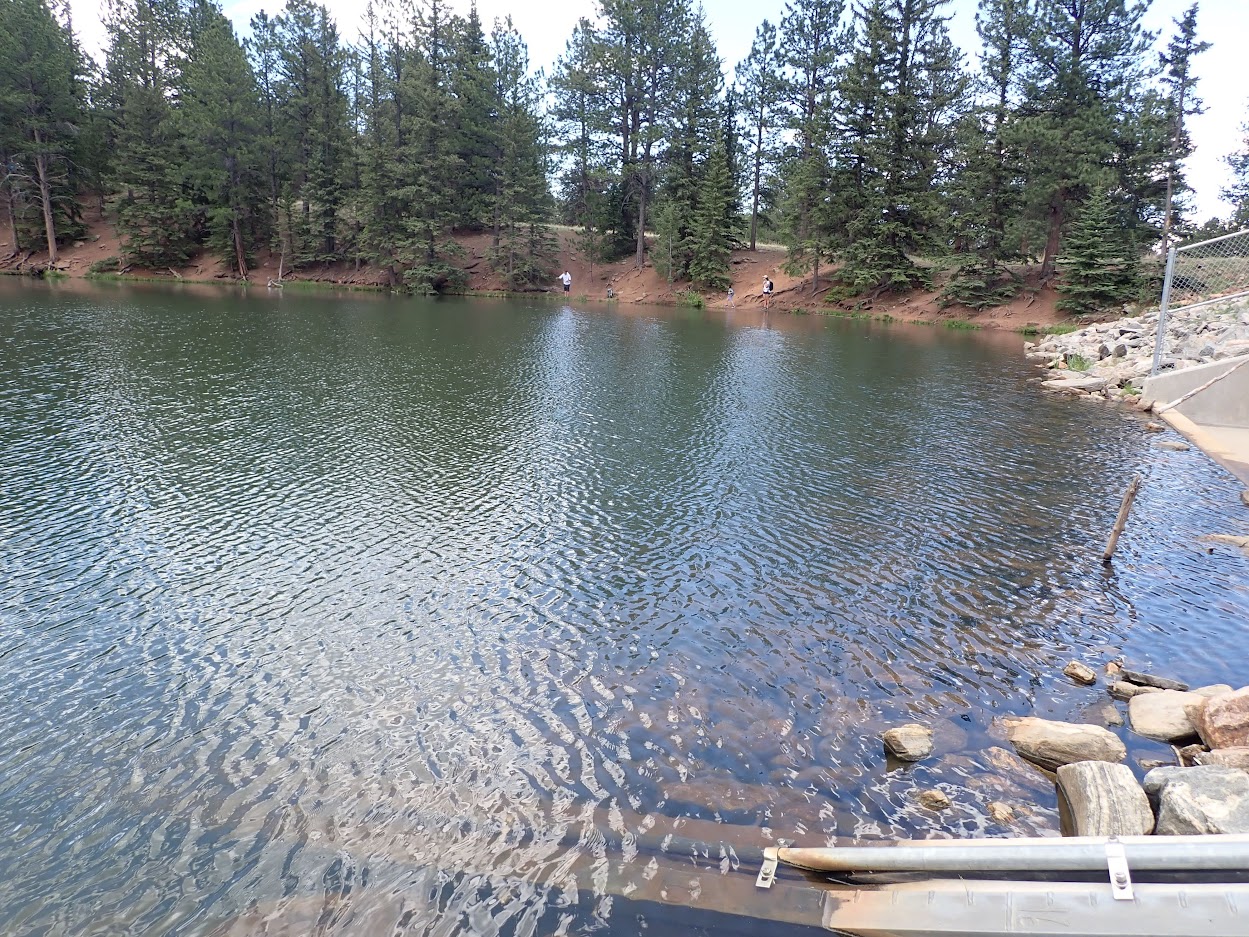 The weather was spectacular, as the temperature hovered in the low seventies, and the wind was weaker and less frequent than two days prior. Once I finished my lunch, I assembled my Orvis Access four weight, and I strolled around the handicapped platform to the angled rocky section of the dam on the west side of the spillway. I yearned for the same area that rewarded me with constant action on Tuesday, but a woman and her son were positioned in the southeast corner, and I conceded them adequate space.

I began with a beadhead emerald caddis pupa and a dark cahill style wet fly, and I began spraying casts in all directions from my position along the rock dam wall. Within the first fifteen minutes I landed three small rainbow trout, and I was certain that the magic of Tuesday was about to continue on Thursday. A lull over the next ten minutes, however, assured me that ridiculously easy fishing was not a reality for Thursday, June 11. 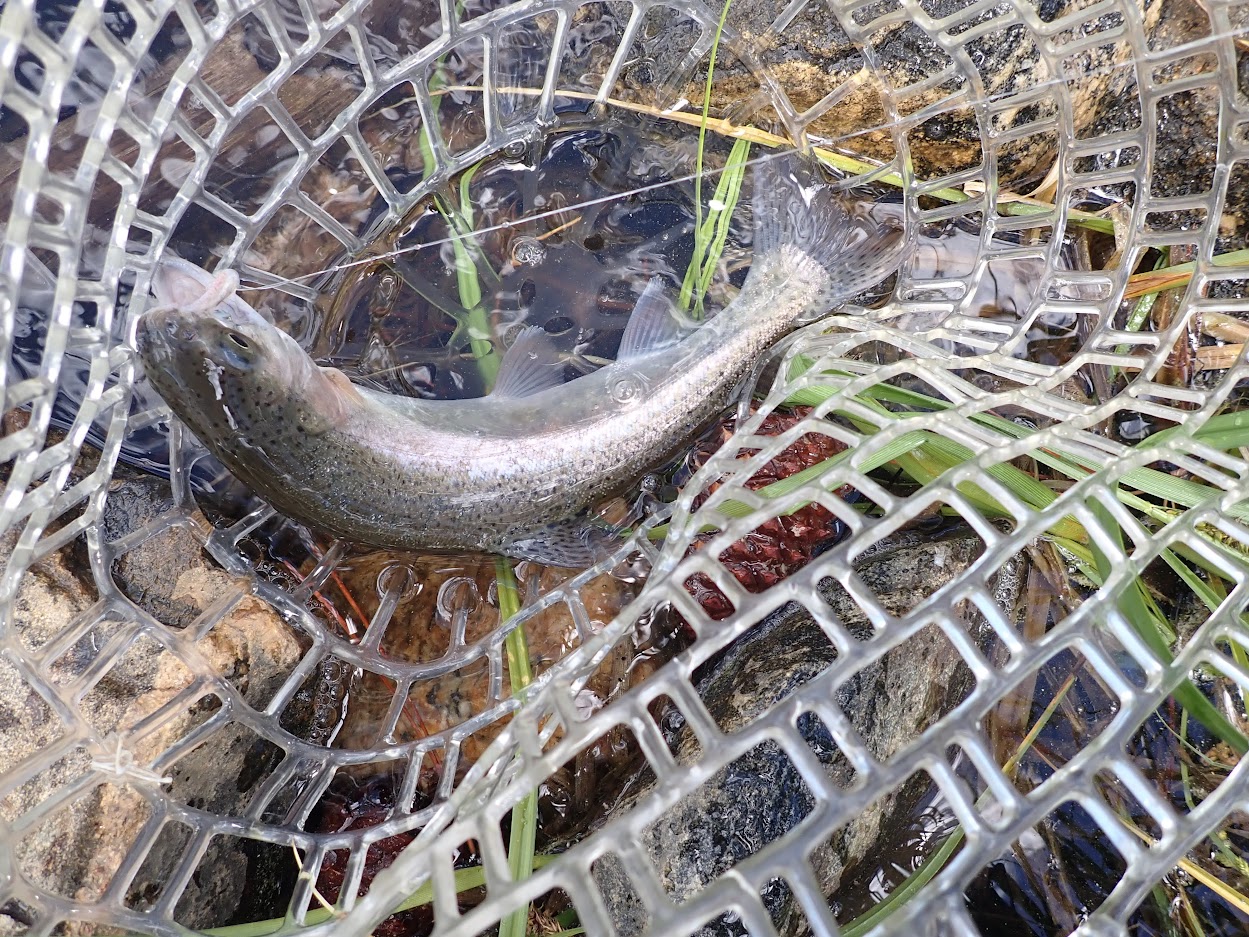 I was craving the southwest corner of the pond, when the mother and son decided to call it a day, so I immediately hooked my flies to the rod guide and circled across the metal bridge and descended to the area ten feet beyond the concrete spillway. This spot would remain my home for the remainder of the afternoon. Unlike Tuesday when I experienced extended periods, when fish attacked my fly on every cast, I had to work for my fish count on Thursday. My catch rate was decent, but I never settled on a single fly that was a dependable fish attractor. I cycled through an abundant quantity of fly changes, and it seemed that each one fooled a fish or two, and then the pond residents became educated and ignored my offerings. 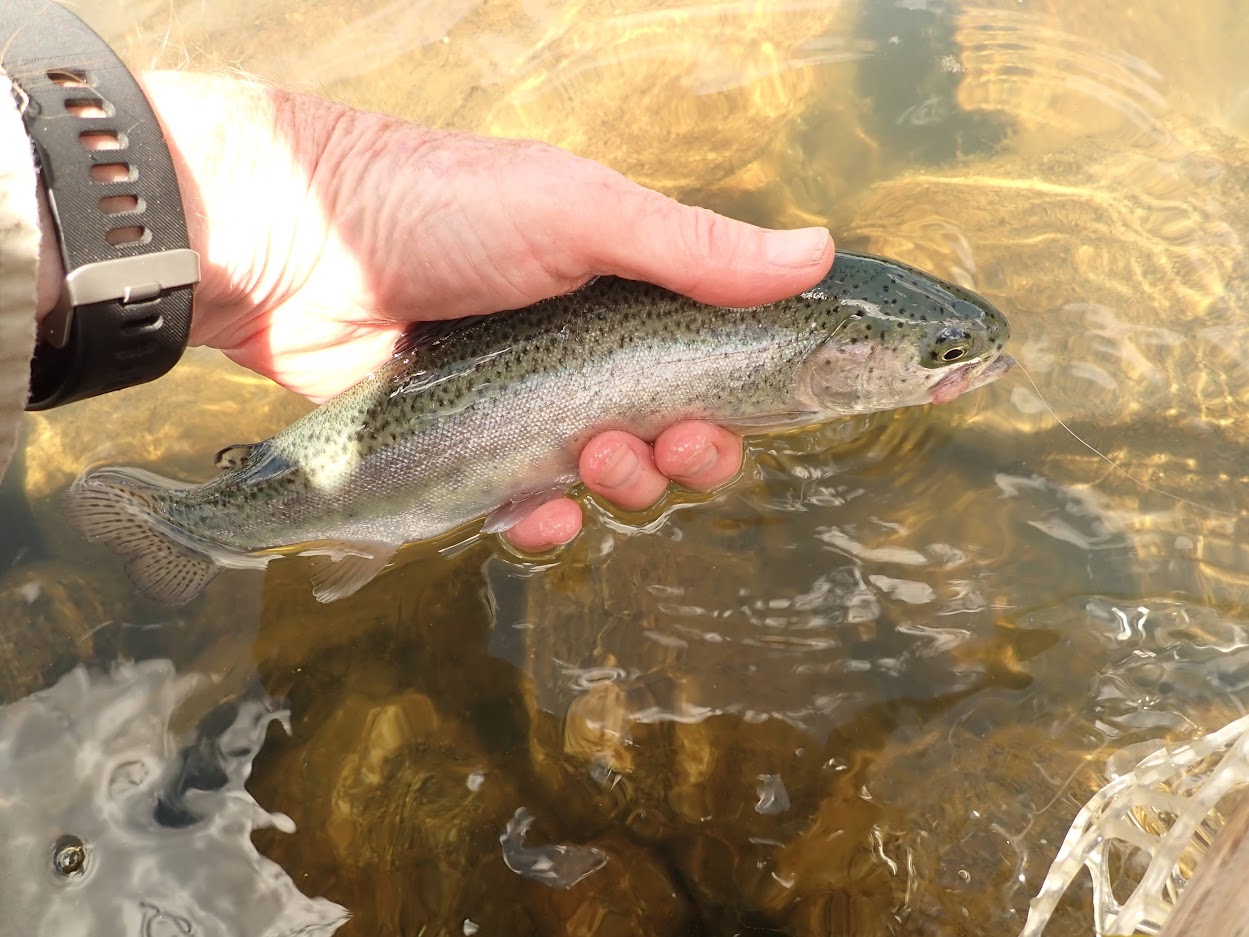 By 3:30PM when I called it quits, I landed fifteen stocked rainbow trout, and all were in the nine to twelve inch range. I cycled through numerous flies that included a wiggle damsel nymph,  prince nymph, leadwing coachman, hares ear wet fly, bright green sparkle caddis pupa, partridge and orange, soft hackle emerger, black parachute ant, brown-olive body deer hair caddis, and Jake’s gulp beetle. Nearly every fly duped at least one fish, but only the wiggle damsel nymph registered more than a couple netted fish. The damsel accounted for at least four of the fifteen fish that rested in my net during the three hours of fishing.

The wind ebbed and flowed, and when it died back, the smooth surface of the pond was sprinkled with small expanding rings from sipping trout. I was never able to observe the food that spurred these feeding spurts, but I experimented with a fur ant, adult caddis and a black beetle. The ant generated only refusals, but the caddis and beetle produced a few fish. When the wind accelerated to create a surface riffle, the fish shifted to subsurface feeding. I remained faithful to the double wet fly combination, because I enjoyed more success below the surface, although the action was much more inconsistent than that of Tuesday. I suspect that I encountered very recently stocked trout on Tuesday, and by Thursday the hatchery raised fish had already developed a bit of wariness. 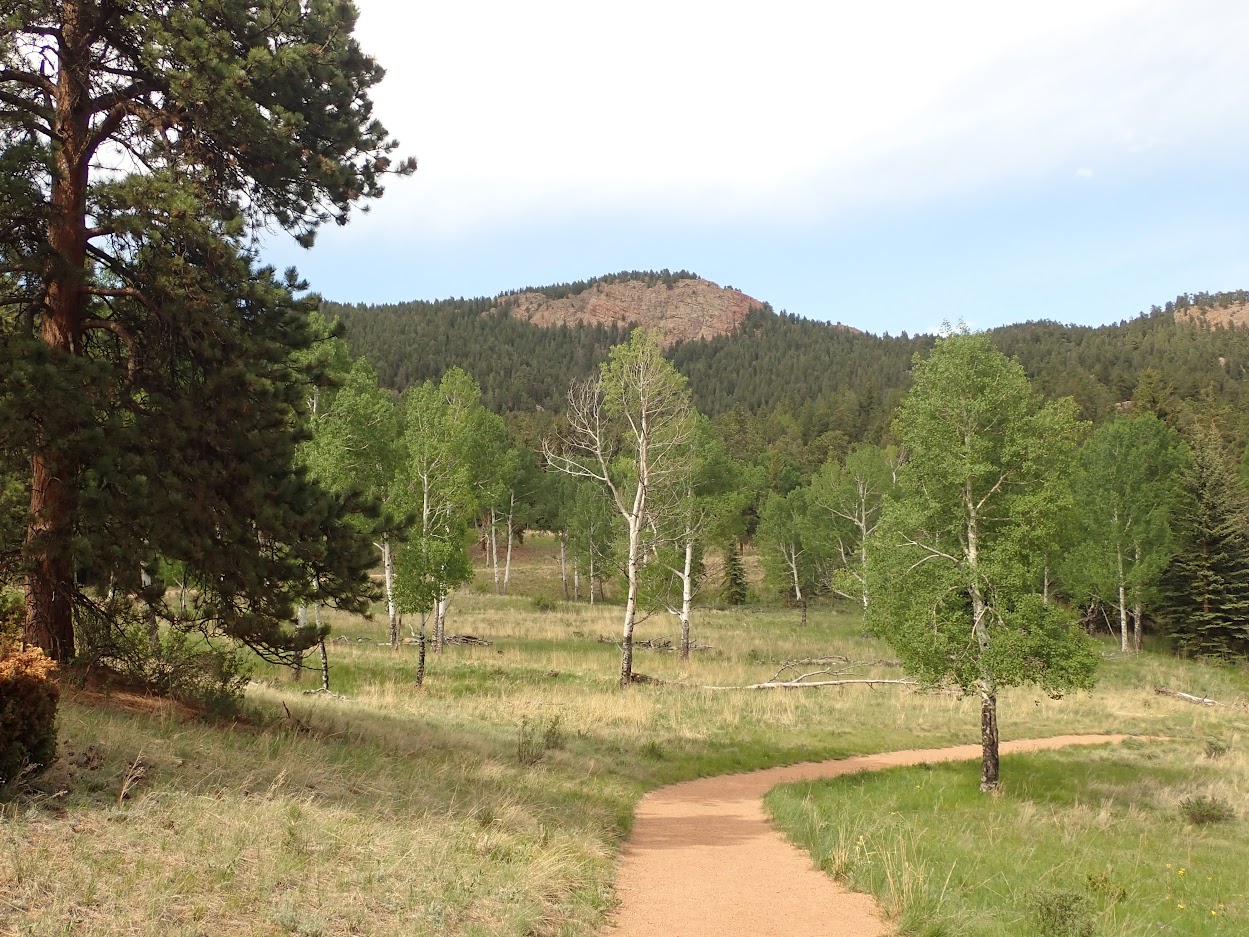 Caught My Attention on the Return Hike

Thursday was another enjoyable day of fly fishing in Colorado. I accompanied my wife on a magnificent hike through the forest, and then I landed fifteen trout in three hours. Admittedly the fish were stocked and not as gratifying as wild trout, but given my lack of success on lakes and the limited options on streams, I was quite pleased with my results.