Usually in early July I’m checking stream flows and looking for any flowing water that might be at a fishable level. This year, however, I’m just trying to figure things out. Run off never occurred and most every river and stream in Colorado has been at a nice level for fishing throughout May and June and early July. But what of the hatches? Usually the hatches on the freestone streams take place as the rivers drop back to fishable levels. But what about this year? Are they early or will they occur in mid to late July?

I’ve been following several fly shop reports on fishing conditions, but these always tend to overstate the hatches as they are trying to attrack Front Range fishermen to their drainages and shops. As I considered where I wanted to fish on Saturday, I remembered reading on the Blue Quill Angler (usually one of the more reliable sites as the fly shop is not near one single river) that PMD’s were hatching on the Colorado River near Parshall. The weather was expected to be overcast on Saturday with cool temperatures and the flows on the Colorado River were slightly below 400cfs. The combination of all these factors led me to conclude this was the place to be. I had great success on the Colorado River in 2008 and 2009, but 2010 provided me with quite a few disappointing trips. I decided to give the Colorado another chance.

The reports mentioned that the hatches typically took place in the morning, so I got off to a very early start to make sure I was there in case this was true. Of course the report may have been referring to the extremely warm temperatures of the past several weeks and that was the case on Saturday, but I wasn’t taking any chances. I left the house at 6:30AM and reached the parking lot by 8:30AM and was on the river fishing by 9:00. The mosquitos were out, but not as intense as in the past, but I still coated my hands, neck and face with Off.

I walked to the handicapped platform and looked up and down the river. Of course there was a fisherman planted in the very spot that I love to start at above the platform, so I hiked down the fisherman path to the bridge, across the bridge, and then dropped down to fish along the south bank. I tied on a yellow Letort hopper and trailed a beadhead hares ear. I was not going to overanalyze the situation. I methodically worked my way up along the bank fishing ten feet out and then over close to the bank, but the fish were having none of it.

Eventually I approached the small island across from and slightly below the wooden platform and fanned casts over the beautiful deep run across from the dock. As I was doing this, I noticed two rises, one towards the top of the run and one in the middle area. After I’d covered the area with my hopper/dropper with no success, I clipped off the two flies and replaced with a light gray caddis size 16. Amazingly on a downstream drift towards the middle of the run, a fish rose but refused my caddis. It seemed like a larger fish judging from the sound it made. That was it, however, as I couldn’t entice any more interest from that fish or any others in the vicinity of the island and handicapped platform.

After quite a bit of casting I switched to nymphs and tied on a beadhead hares ear and below that a beadhead pheasant tail, which imitates the nymph of a pale morning dun. I focused hard on running my nymphs through the deep run, but no takes. I switched out the flies and tried a beadhead caddis of varying colors as well as a zebra midge larva. Finally I gave up on the run and my nemesis fisherman had by now moved across the river to the south bank and then up toward the top right side of the nice run through the center of the river.

It was eleven AM and I was bored with the lack of action so I decided to head back to the car and eat my lunch early in case a hatch emerged around noon. This would also give the other fisherman some time to clear out if he was headed up the river. I ate in the car to avoid the mosquitos, and it got quite warm as I didn’t want to open windows for fear of getting inundated with stinging insects. After lunch I headed straight to the spot where I’d planned to begin in the morning, and it was wide open with no competition.

I gave up on nymphing and returned to the Letort hopper with a beadhead pheasant tail. In the nice riffle water of moderate depth above the platform I finally landed a nine inch brown on the beadhead pheasant tail. Perhaps this was a sign that fish were moving to the nymphs in the drift prior to a hatch. I worked my way across the river casting the hopper/dropper upstream, but to no avail. Next I was sure I could coax some action from the attractive water between the middle current and the bank on the right side. I worked up along the bank but to no avail. I didn’t even see any rises, but as I got to the very top of the slow water I hooked and landed a pair of tiny brown trout that weren’t worth counting. 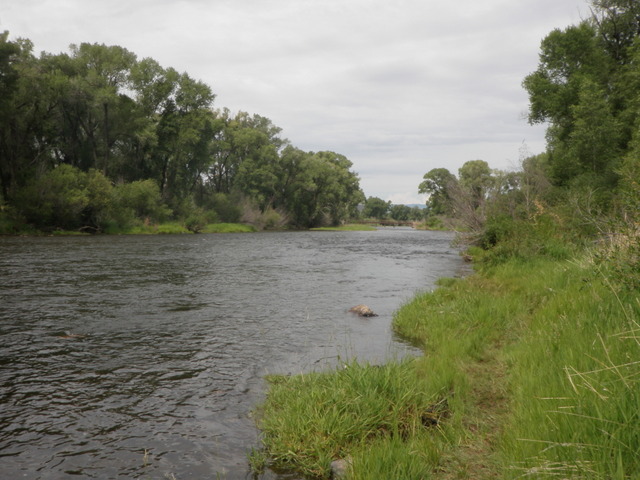 I was pretty frustrated and tired as I retreated along the south bank and crossed back to my starting point. At least I’d seen a few sporadic rises in this area. I removed the hopper and tied on a Chernobyl ant for buoyancy and added the beadhead hares ear and beadhead pheasant tail. Surely this three fly combination would draw the interest of some fish. I worked the closer current seam below a submerged rock and then waded out a bit and cast to the next seam across from me. As the large foam attractor drifted to the tail, I began to lift and recast. Unfortunately as I did so a large mouth emerged and chomped down on the Chernobyl. There really wasn’t much I could have done. The force of me lifting vs the chomping of what seemed like a decent fish resulted in a break off. I lost the best opportunity for a decent fish along with three decent flies.

This re-energized my efforts and I worked my way across and then up along the left side of the mid-stream current, but again I was simply wearing out my shoulder with no reward for my efforts. Finally near the top of this stretch, I hooked and landed a six inch brown barely worth counting, but I did. I decided to reverse direction and cast repeatedly to the edge of the main current seam as I waded back down to my initial starting point. The sky was still cloudy and I spotted occasional PMD’s and more yellow sallies, but nothing was coming to the surface in response to these aquatic insects.

I decided to sit down on a log and observe and take stock. I almost dozed off, but I did notice quite a few yellow sallies. They tended to make fast vertical plunges to the surface of the water and then flutter a bit and then take off. I assume this was egg laying. At the same time I noticed the sporadic steady flight of mayflies which I assumed were PMD’s. The PMD hatch was extremely sparse, but perhaps the fish had long memories and  tuned in to the mayflies. Finally I saw a fish rise across from my log and decided to resume fishing. I tied on a size 14 yellow sally and tossed it to the smooth area between two submerged rocks. On the second or third cast a fish darted to the surface and sucked down my yellow sally. My third fish of the day was another nine inch brown. 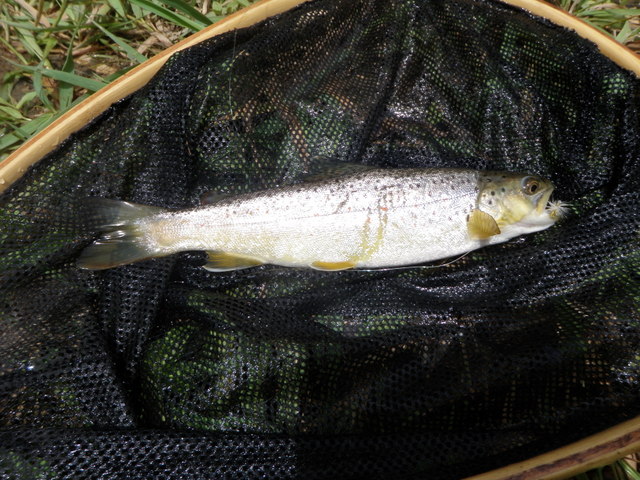 I sat back down on the log and looked for more such rises, but they didn’t materialize and even the sparse hatching activity of the PMD’s and yellow sallies subsided. There were some large dark clouds to the south and the rumbling of thunder, so I decided to head back to the car and call it quits. All in all it was a very disappointing day in early July. Was I too early for the hatches or did they already occur? I’ll have to keep searching for answers on the streams of Colorado.