I had my heart set on South Boulder Creek as a destination for Tuesday, but when I examined the DWR flows, I learned that the water managers decreased the releases from Gross Dam from 103 CFS to 7 CFS on October 9. I have experienced decent success at low flows on South Boulder Creek but always at 10 CFS or higher. I passed on South Boulder Creek and instead opted for a two hour drive to the Eagle River near Avon, and I encountered a mediocre day of only four trout in my net, although two were substantial rainbow trout.

Another day in October with a high around eighty in Denver prompted me to plan a second consecutive fishing trip. Since I completed a relatively long drive on Tuesday, I was averse to a similar long trip on Wednesday. I began my search for a suitable Front Range stream by rechecking South Boulder Creek, and I was shocked to discover that flows were actually reduced from 7 CFS to 5 CFS. I quickly scratched my home waterway from my list of possibilities. My second choice was the Big Thompson River with flows maintained at 77 CFS for two consecutive days, but a quick inspection of the weather forecast revealed thirty mile per hour winds in the afternoon. Strike two. My third choice was Clear Creek in Clear Creek Canyon west of Golden, CO. Flows in the thirty to forty CFS range were favorable, and wind speeds in the 8-10 MPH range up until 2PM, when they were predicted to burst into the 18 MPH range, made Clear Creek my choice. 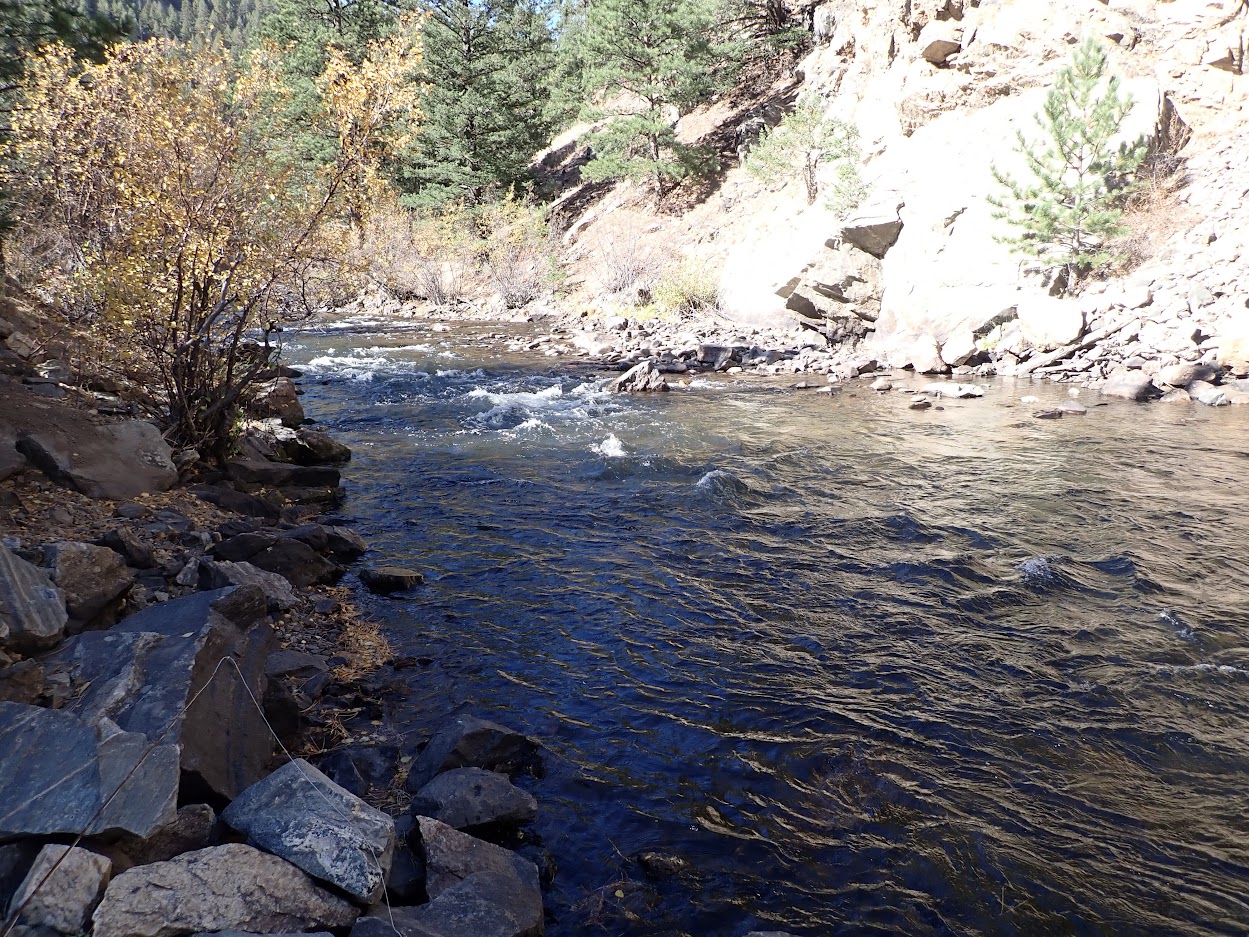 A Place to Begin

I arrived at a pullout along US 6 west of Tunnel 6 by 10: 40AM, and this enabled me to begin casting slightly before eleven o’clock. I utilized my Orvis Access four weight and wore my Brooks long sleeved undershirt and my raincoat as a windbreaker. The air movement was less than predicted for Estes Park, but 10 MPH translated to more than a nuisance. For the first thirty-five minutes I worked a dry/dropper rig through all the promising deep and slow moving pockets along the left bank, and my net remained in an empty state. Early in the game I spotted a fish along the bank, and it ignored all three flies, as they passed over its field of vision. 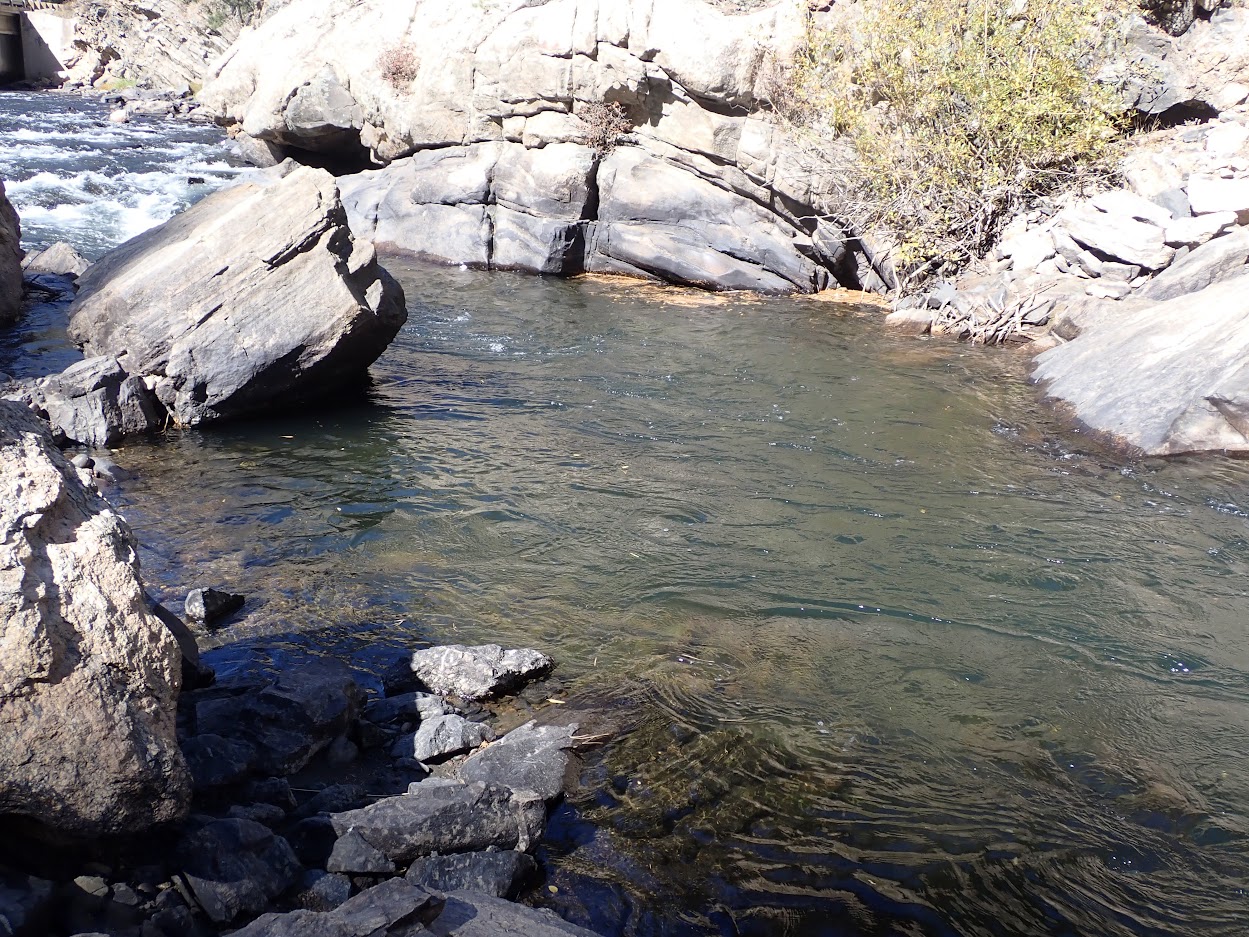 Scene of My Single Landed Trout

I ate lunch at 11:45AM and then removed the three fly arrangement and migrated to a solo Jake’s gulp beetle. On Tuesday evening I perused my reports on Clear Creek during October from previous years, and a Jake’s gulp beetle was a stellar producer. I persisted with the foam beetle for two hours after lunch, and I managed to dupe one seven inch brown trout to eat the size 12 imitation. I tried beetles in size 10 and 12, and after a subtle refusal I substituted a size 18 black parachute ant. I was hopeful that the larger beetle would cause the trout to reveal their position, and then a smaller black ant would trigger an eat. The theory never grew into reality, and I returned to the beetle. 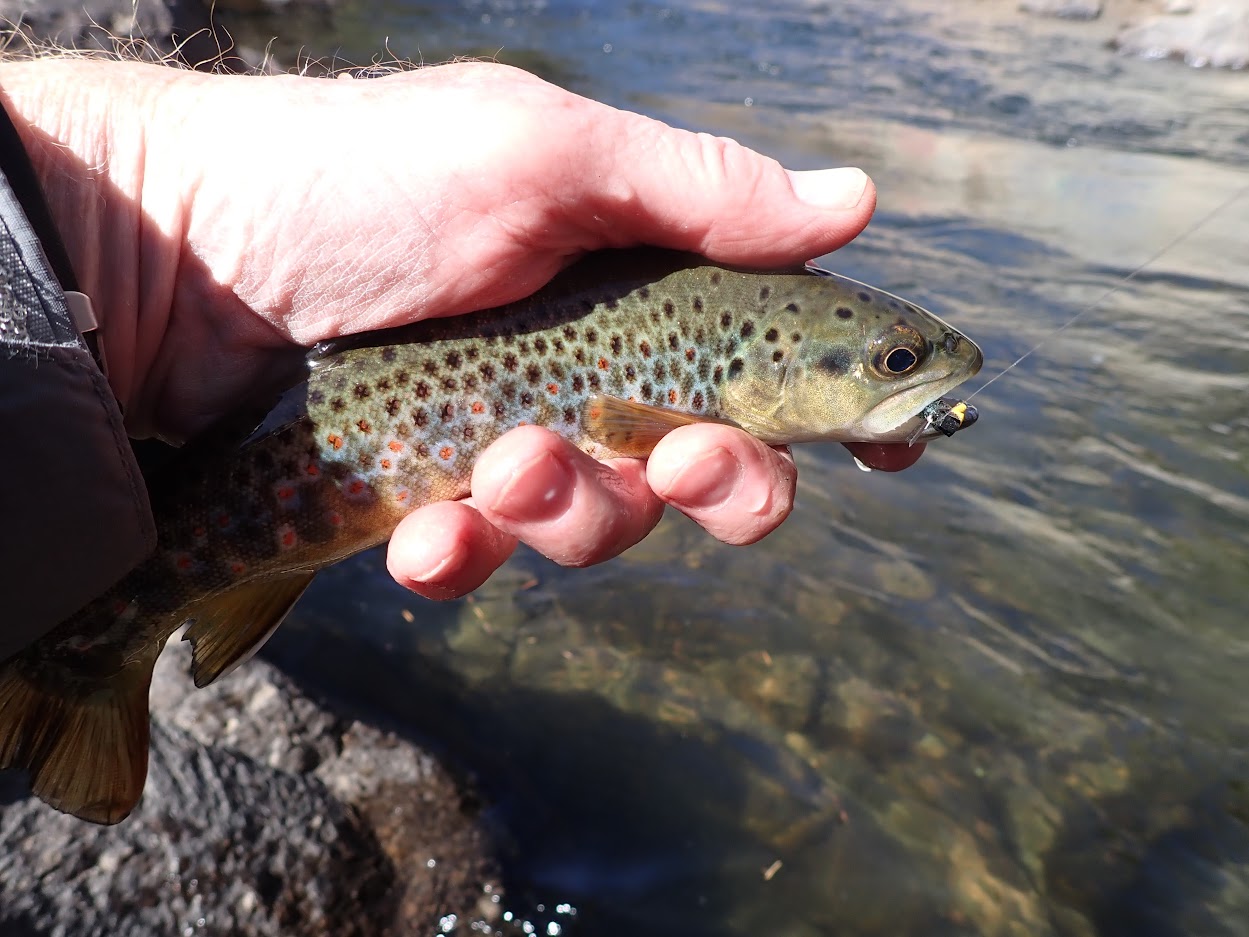 Closer to 2PM I noted a few more refusals, so I decided to experiment with a peacock hippie stomper. The white wing on the stomper was more difficult to track than the orange foam on the beetle, and the wind speed accelerated immensely. The quality of fishing did not justify the hassles of the wind and poor lighting, so I hooked the hippie stomper to my rod guide and returned to the car.

Wednesday was another bust in Clear Creek Canyon. The fishing season is winding down, and my results are ebbing as well. The weather forecast predicts a shift to colder temperatures but no precipitation. Fly tying may be imminent on my calendar.