Dan sent me a text message and suggested we go fishing one evening the week of August 6. We agreed to make it happen on Tuesday evening, and Dan’s roommate Adam agreed to join us. Dan and I constructed a wading staff for Adam after our camping trip to Lake Creek in early July, so we were anxious to present it to him.

I got off work a bit early, so I texted Dan to tell him I’d meet them in the parking lot at 5:45PM where the bike trail begins along Clear Creek off the Hidden Valley exit of interstate 70. I spent an hour fishing upstream from where we parked prior to their arrival. Initially I attempted to walk up the frontage road to the area just north of the I70 bridge, but a construction person stopped me and informed me that the road construction was taking place around the clock and creating hazards in the stream, and I wasn’t allowed to fish in that area. I reversed course and began fishing the deep run and pool next to the parking lot and then continued under the ramp bridge and I70 bridge and a bit to the north. I began fishing a parachute hopper trailing a beadhead hares ear and had several refusals plus one momentary hook up on the hares ear.

When I was in the shadows under the bridge I noticed quite a few small caddis flitting about, so I clipped off the two starting flies and tied on a size 16 deer hair caddis with a gray body. Just above a large boulder along the left side, I spotted a quick rise from a fish, and after four or five drifts, the fish came up and smacked my caddis. I was pleased to land one fish before Dan and Adam arrived. I continued working upstream but didn’t experience any more action, not even a refusal before I returned to the parking lot. 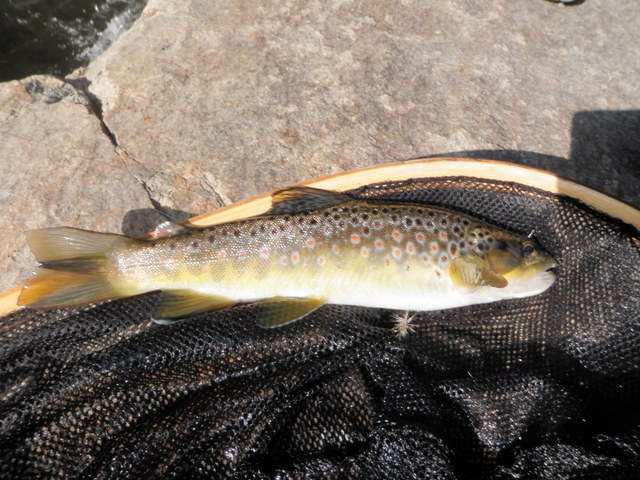 When I walked down the road to the lot, Dan and Adam were already there and nearly dressed in  their waders with rods strung. I presented Adam with his wading staff, and he was immediately quite taken with it, even suggesting he might take it to bars to pick up chicks. The three of us decided to head down the bike path and to go beyond our previous furthest point downstream. When we approached the wide shallow area, I decided to wade to the opposite bank next to I70 and then walk further downstream. Dan walked down below an island and Adam moved into the wide stretch.

My choice was fortuitous as I landed two decent browns in short order. The tiny caddis seemed futile for this work, so I tied on a Chernobyl ant for flotation and dangled a beadhead hares ear beneath. The hares ear did the work, as I found it in the lips of both browns. The second brown drifted under the Chernobyl for quite a distance and then opened its mouth so I set the hook. Much to my amazement the hares ear nymph was in the brown’s upper lip. 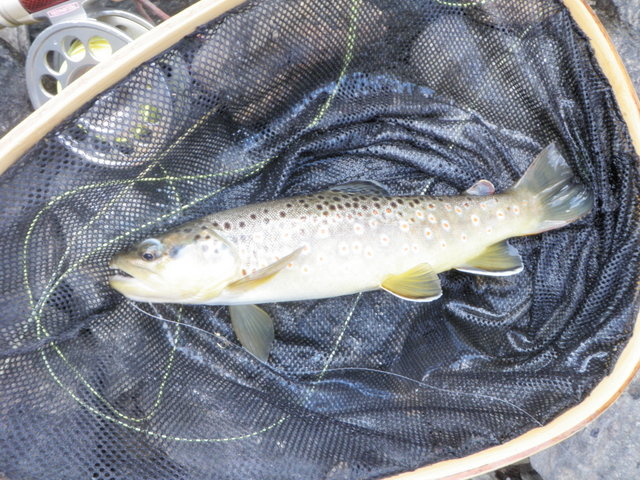 I continued working up along the right bank next to the interstate, and that involved much rock climbing and dodging auto and truck debris. There were audio cables, headlamps, clamps, and tools. At one point I picked up a screwdriver and stuffed it in my wader pocket. Foraging for forgotten highway debris proved to be much more successful than finding fish and I covered quite a bit of the stream with no action from 6:15 until the sun set at 7:45 or so. It was a very warm day in Colorado, and even at the elevation of Clear Creek, the high temperatures apparently caused the fish to be sluggish. 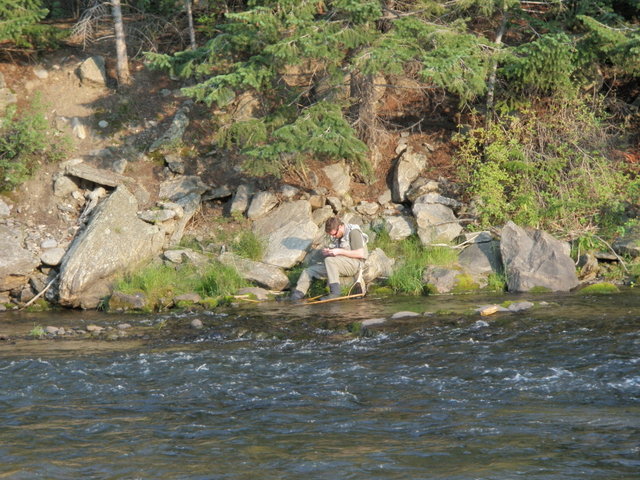 Dan Works on His Line

Once the sun dropped behind the canyon wall, it cooled a bit and I began to see more caddis activity. I swapped my polarized sunglasses for my regular lenses and moved upstream to find a crossing point. As I walked along I70 I found a long heavy metal bar and upon close inspection decided it could be used as a digging bar. I had inherited one of these earlier in my life from my father, but somehow in the process of making two moves, it disappeared. I could have used one several times as we did landscaping work around our house at 9026 E 35th Avenue, so I picked it up and lugged it down the steep bank and through the dense vegetation to the edge of the stream. I used it for stability as I crossed at  a fairly swift location.

When I got to the other side I challenged Adam to a wading staff battle, but he declined upon seeing the weight of my iron digging bar. I decided to mostly guide Adam in hopes that he could land a fish, but during one lull in directing him, I dapped my caddis tight to the bank in a small narrow slack water area and watched in amazement as a ten inch brown rose and sipped it in. I tried to get Adam to mimic this tactic, and he did experience one refusal next to a streamside rock. 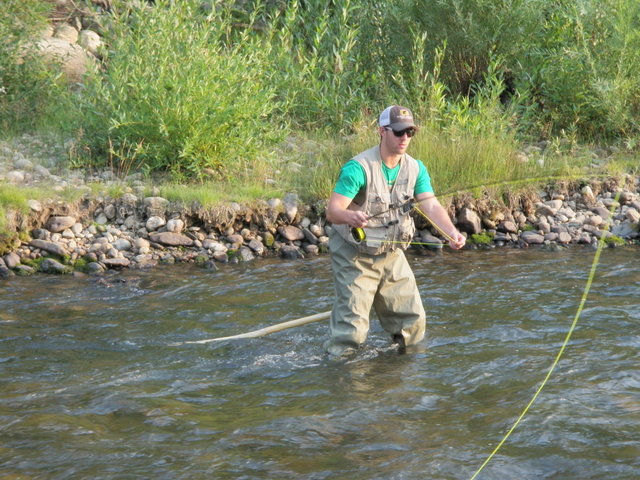 Eventually it became so dark that we couldn’t even see our flies from close up, so we called it an evening and returned to our cars and then ventured to Tommyknockers’ brew pub in Idaho Springs for dinner.