In my opinion cutthroat trout are the most beautiful of all freshwater trout. I find it ironic that the only fish native to Colorado is also the rarest; and, therefore, I am always thrilled to catch these rare and gorgeous fish. On Monday August 16 I decided to pursue cutthroat trout in a relatively close stream.

The high for Denver was forecast to peak in the low 90’s, and the dashboard digital thermometer registered 66 degrees, as I began my trip to Clear Creek. When I parked near my ultimate fishing destination, the temperature was 53 degrees. The impact of elevation on temperature always amazes me. Knowing that the temperature would quickly rise to more comfortable levels enabled me to forego an extra layer, but I did elect to wear my waders. My decision proved to be a solid one, as the high for the day in my location was in the low seventies. The creek was clear and flowing near ideal levels, and the weather was perfect, as I fitted together my Orvis Access four weight four piece rod. 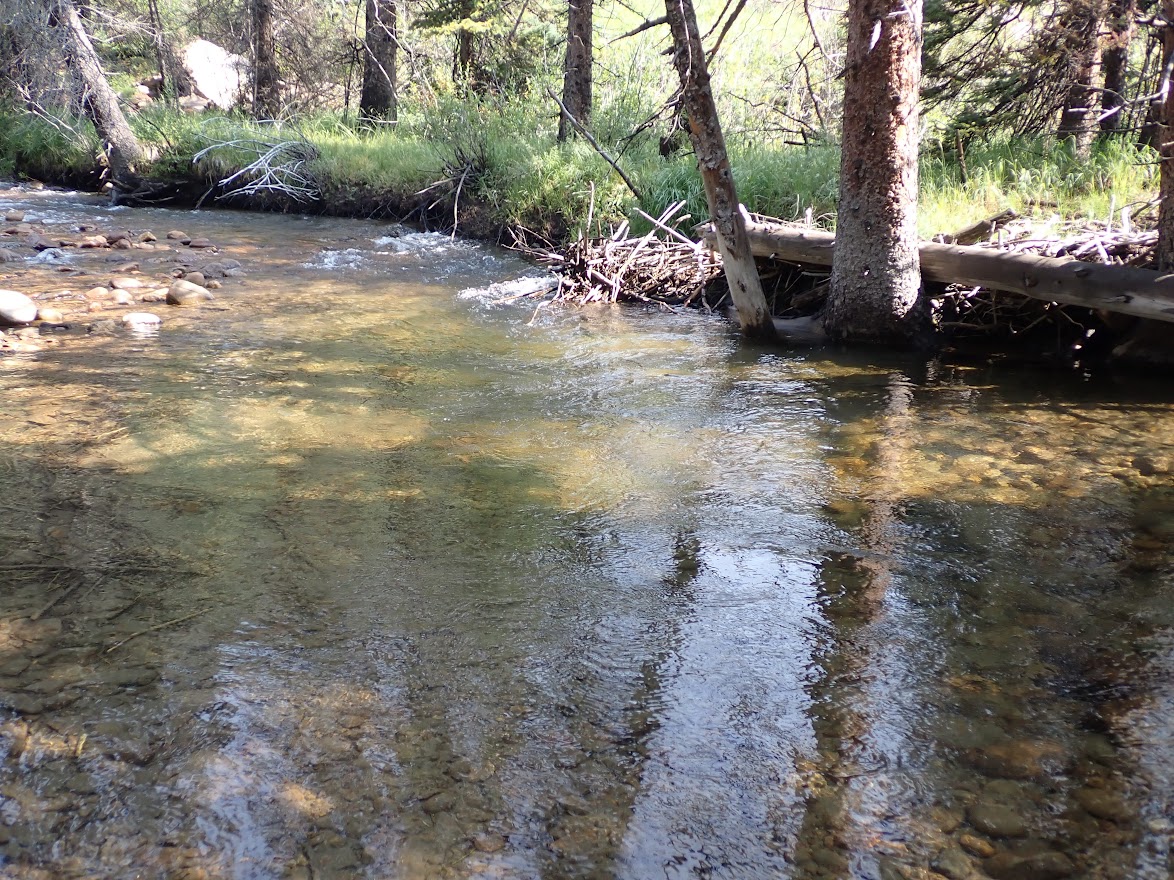 I decided to explore a new section of the creek and began casting my flies at 9:30AM after a short hike. For starters I knotted a peacock body hippie stomper to my line, but after covering some delicious pockets and runs with no response, I reconsidered my options. The water was very cold, and I guessed that the local trout were hugging bottom, so I extended a leader from the bend of the stomper and added a salvation nymph. This finally prompted some action, and I landed one rainbow and three small cutbows on the shiny nymph pattern.

Even though I was on the scoreboard, I remained dissatisfied with my catch rate. I attributed some of the lack of action to being closer than normal to the parking lot and path, but my fly choices were also possibly a factor. I decided to go deeper and added another nymph to the end of the tippet, and this time I opted for a beadhead hares ear nymph. The addition of my most productive fly failed to make a difference, and I once more pondered my options. 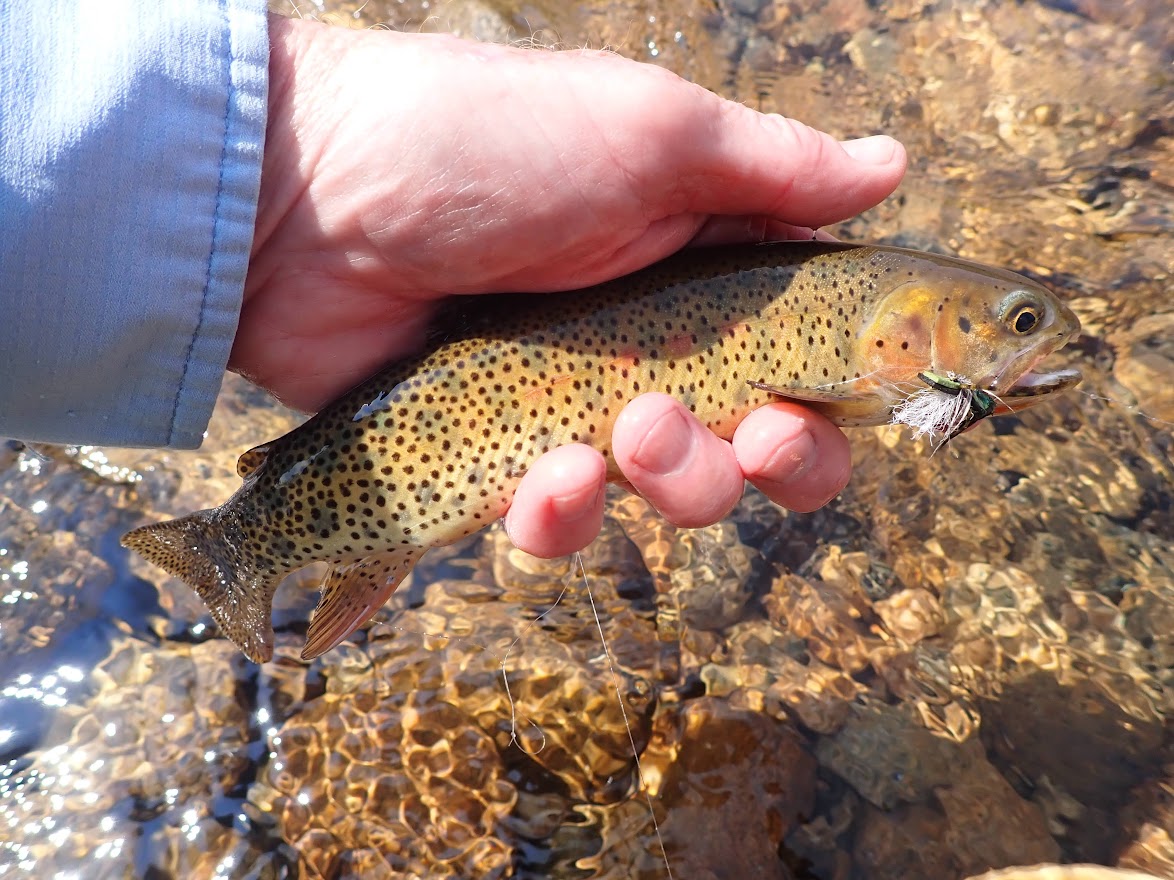 I decided to return to a dry fly approach and elected to present a silver hippie stomper with a size 16 olive-brown deer hair caddis. The caddis accounted for one small cutthroat, and the silver stomper picked up a pair. This brought the fish count to seven by the time I sat on a small beach to consume my lunch. Seven fish in 2.5 hours of morning fishing was only slightly better than the standard average of two fish per hour; however, all the landed fish were quite small. 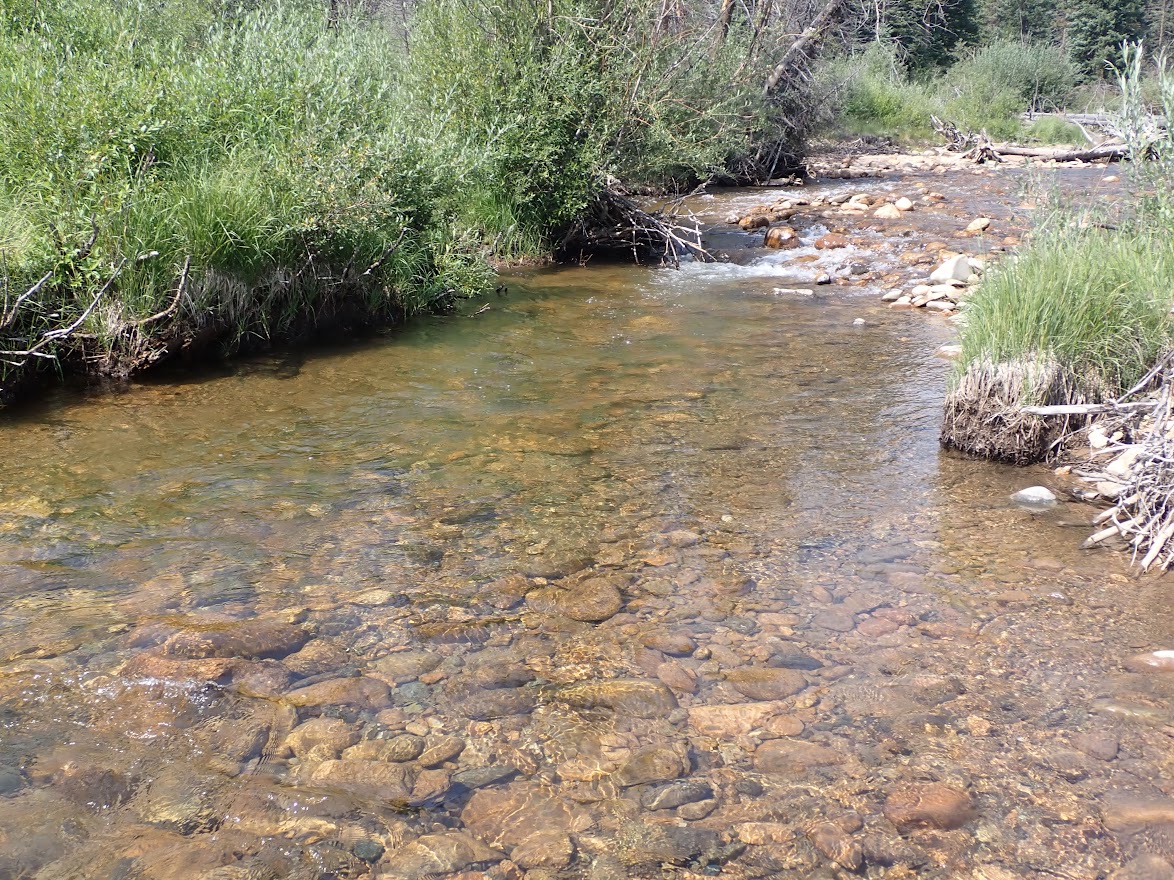 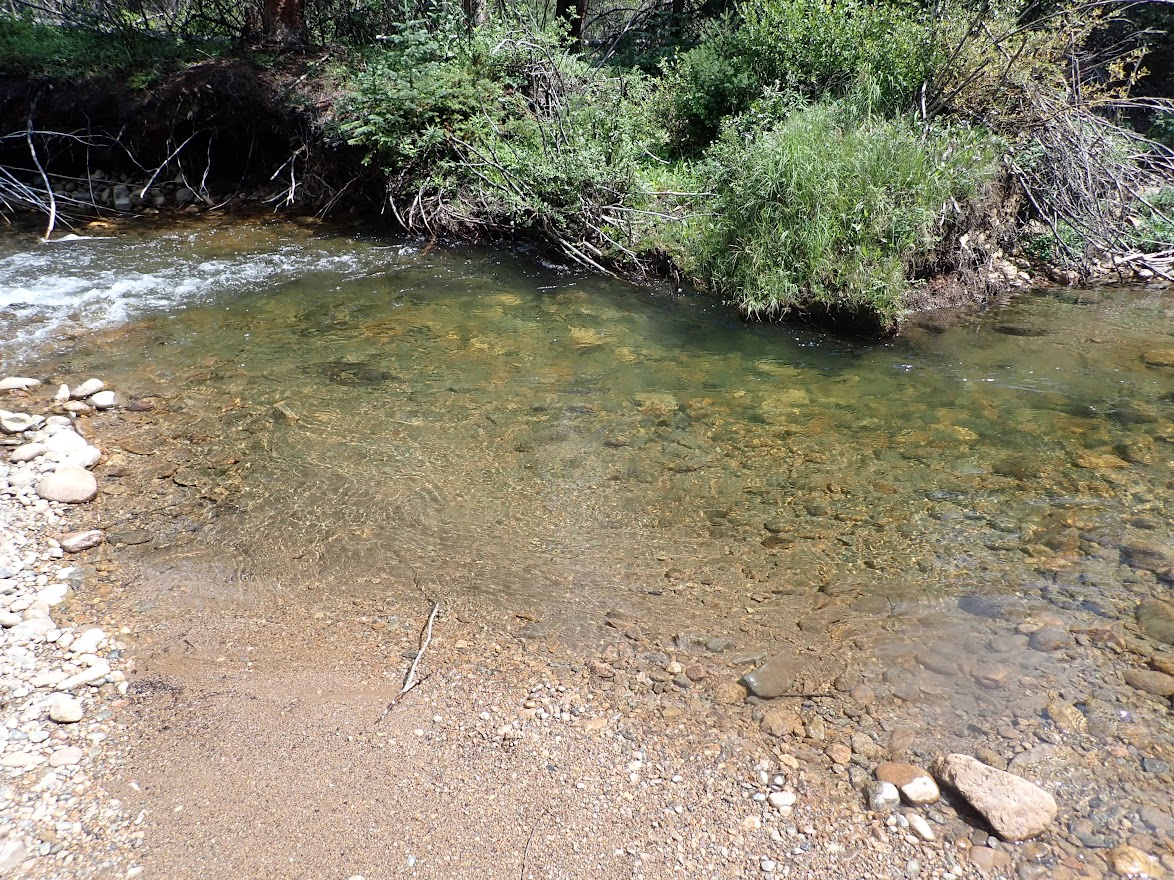 After lunch I once again implemented a change, and in this instance I experimented with a Chernobyl ant trailing the salvation nymph. The Chernobyl generated a few looks, but no takes, and the salvation was ignored. Maybe the looks suggested that the high country cutthroats were looking for smaller terrestrials. I replaced the Chernobyl and salvation with a Jake’s gulp beetle, and the size 12 terrestrial added a trout to the count along with a four-pack of refusals. 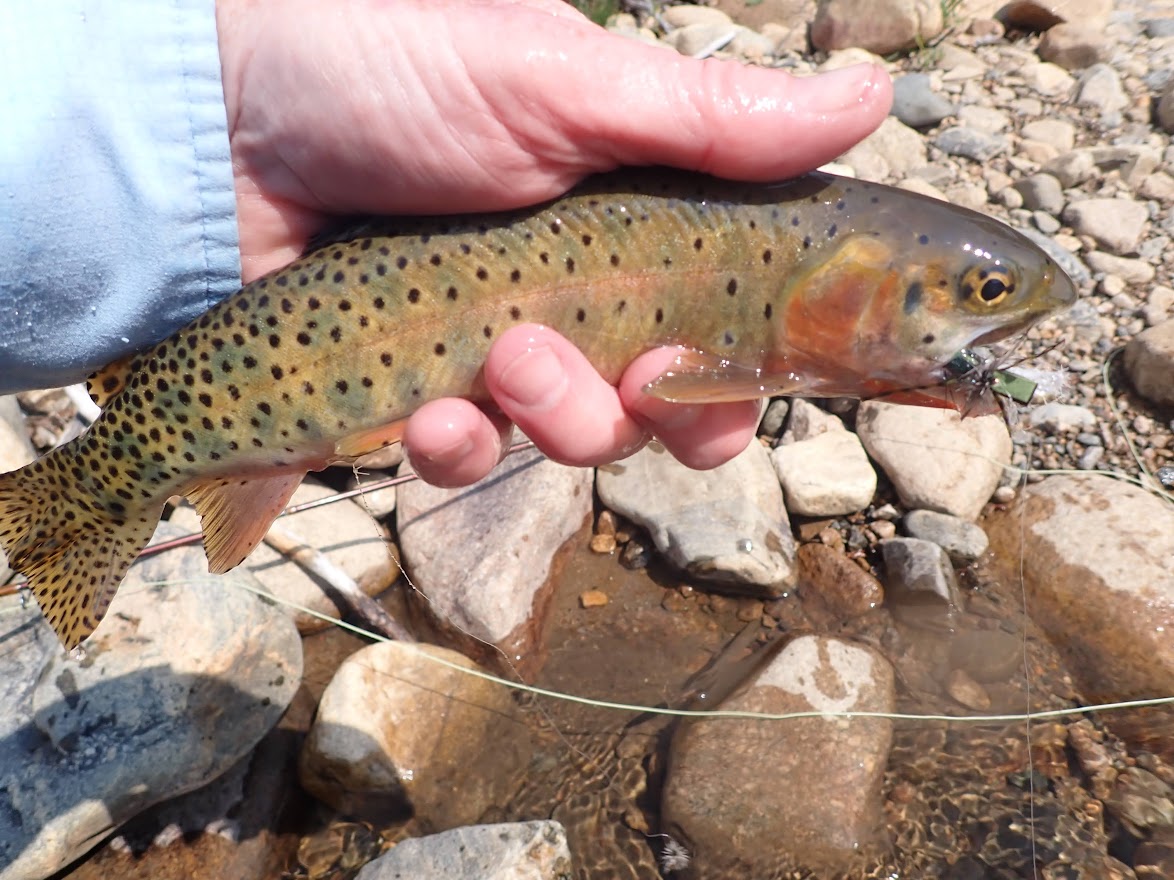 I was now frustrated by my inability to dupe these normally aggressive trout. I decided to return to the dry/dropper approach and attached the silver hippie stomper to my line along with a size 18 black stonefly nymph and a sunken ant pattern. Finally I discovered offerings that generated some fairly consistent action, and I moved the fish count from eight to eighteen over the next hour. All the flies produced at least a fish, but the sunken ant was the favorite of the Clear Creek residents. 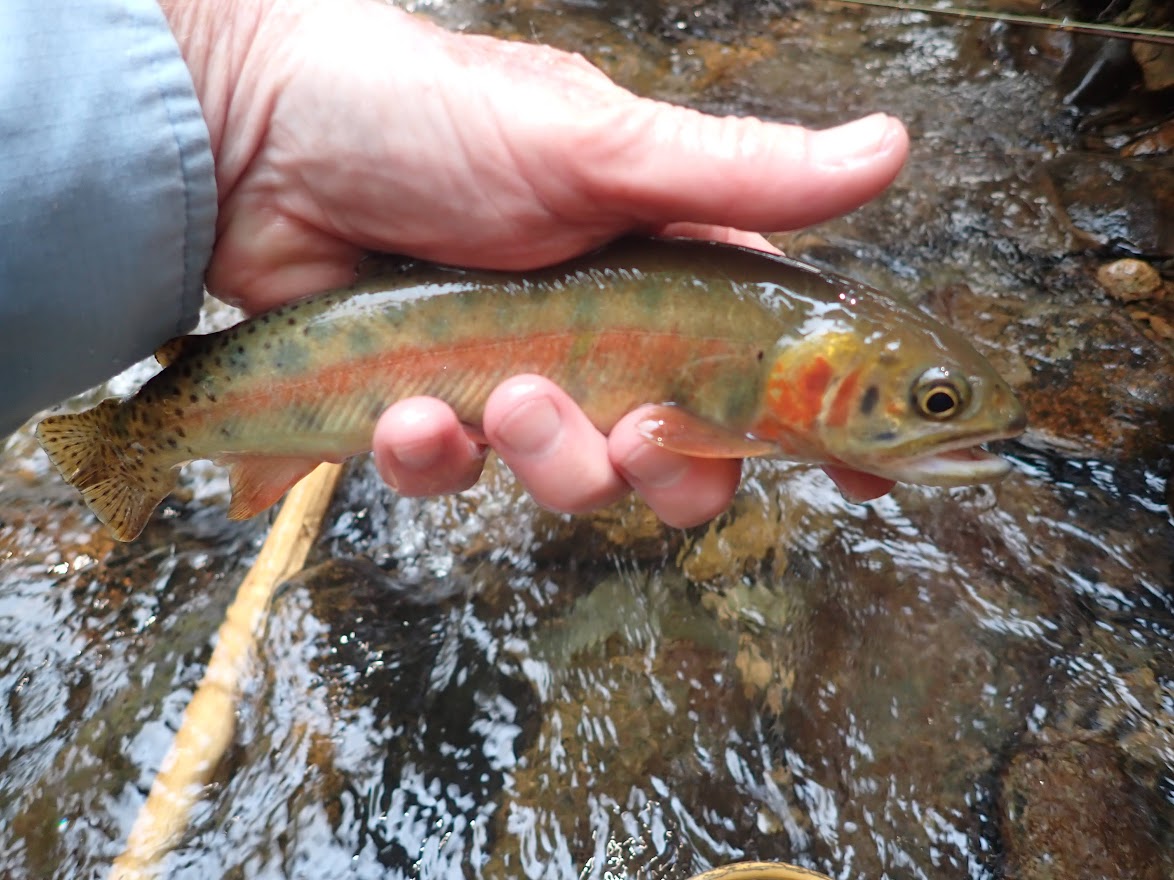 By 1:30PM I approached a stunning deep pool with a deep run 1/3 of the of the way across the stream from the left bank. The main current then curled around toward the right bank and created a small eddy, and as I observed the pool, I spotted five fish. Two of them were very respectable and likely the largest fish that I saw on Monday, August 16. The larger than average targets were having no part of the hippie stomper, black stonefly or sunken ant; so I removed them and switched to a solitary dry fly. My first choice was a size 16 olive-brown deer hair caddis, but it never generated a look. 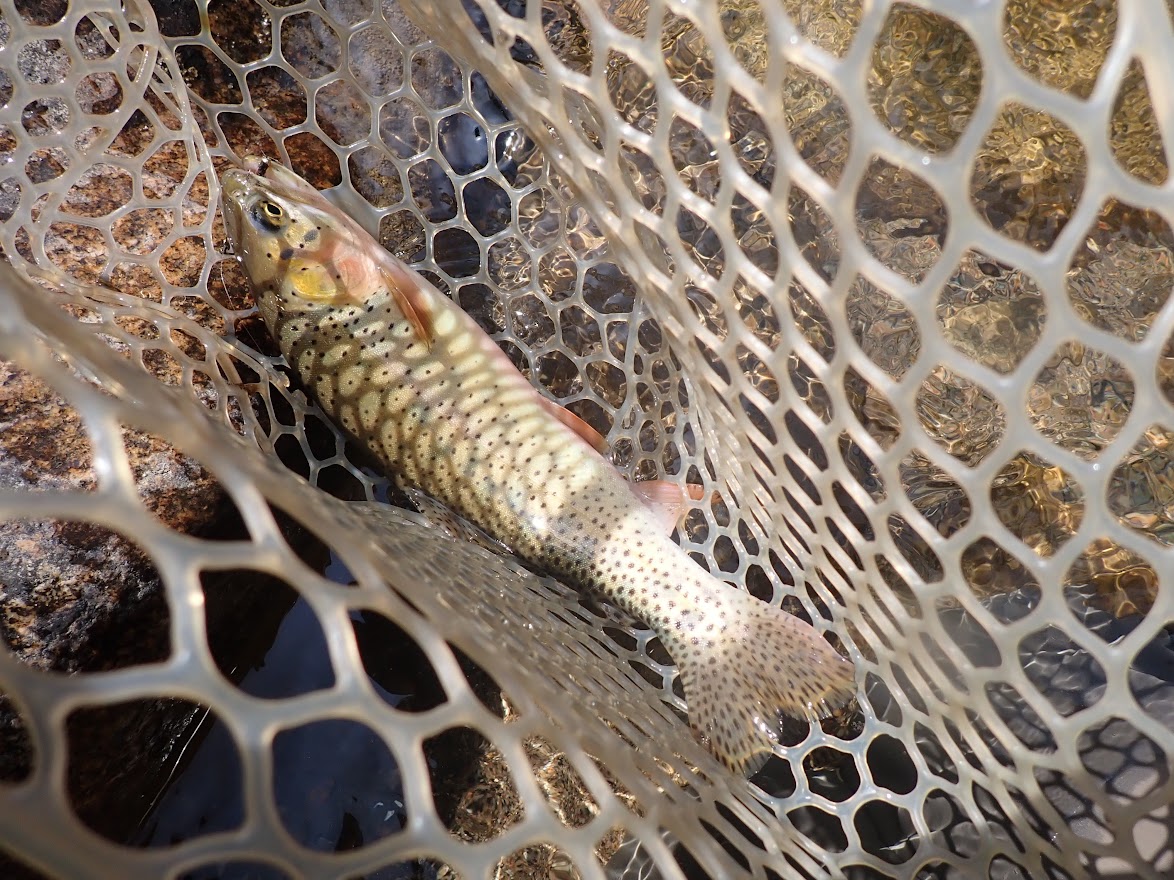 As I was casting the caddis, I counted four olive hued green drakes, as they slowly fluttered up from the creek. Were these fish selectively looking for drakes? I was certain that was the solution to the puzzle, so I plucked a size 14 parachute green drake from my fly box and knotted it to my line. Nothing. The drake pattern looked perfect to this seasoned angler, but the sighted trout barely waved their tails, when the fly drifted over their position in the pool. Next I tried a user friendly version and then a Harrop hair wing, but each failed to attract interest. One of the big boys hovered just below the surface, so I assumed it was in eating mode. I pulled a parachute ant from my box with the hope that the picky trout could not resist a trapped terrestrial. Quite a few large black ants were crawling about on the logs, as I climbed over them to make progress up the creek, so I was, in effect, matching the hatch. The ant may have created a look from the bigger of the two fish, but that was the extent of the interest shown. I decided to give up on the quality eddy and continue my upstream migration. 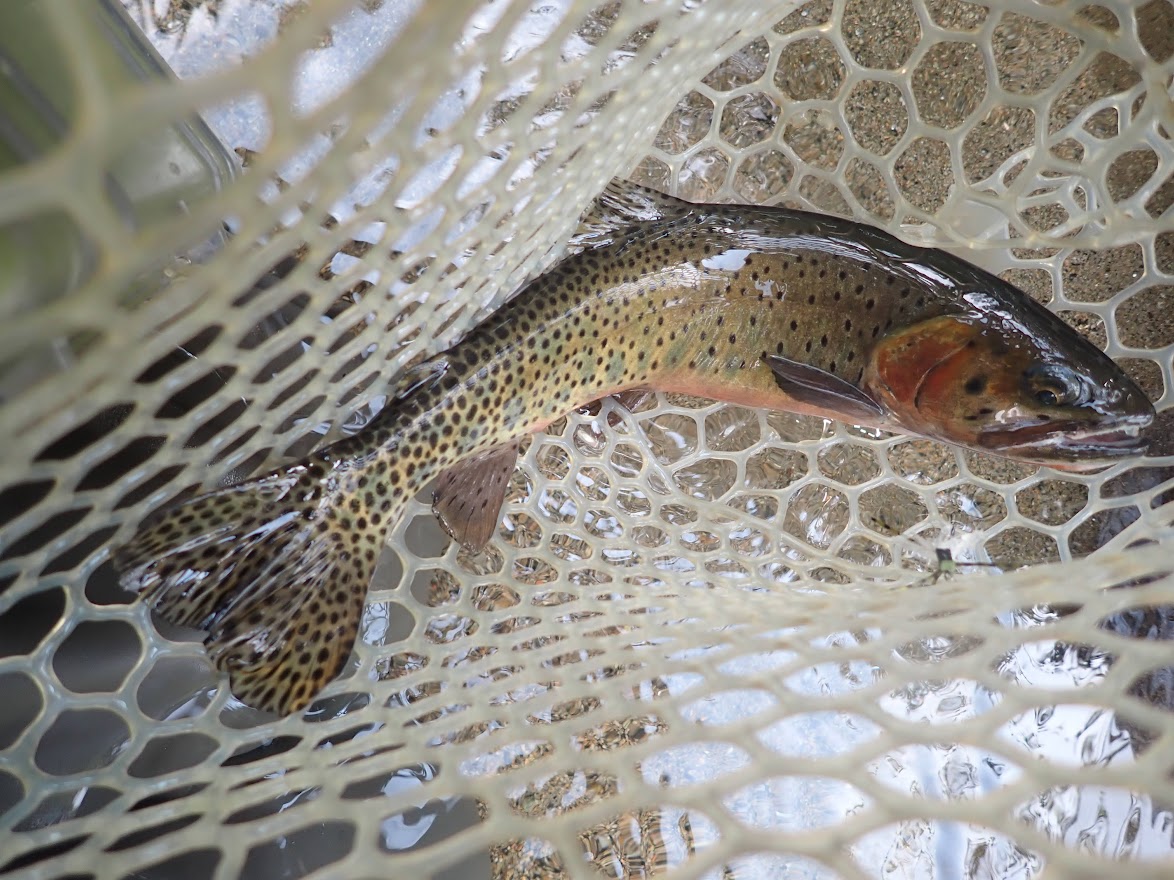 I returned to the approach that delivered the most fish, and resurrected the peacock hippie stomper along with a size 18 beadhead pheasant tail nymph and the sunken ant. This combination proved to be a winner, and I elevated the fish count from eighteen to thirty-one, before I called it quits at 4:00PM. During this late afternoon period all three flies produced, but the clear favorite was the sunken ant. Next on the cutthroat trout hit list was the hippie stomper, and the pheasant tail produced a couple trout as well. 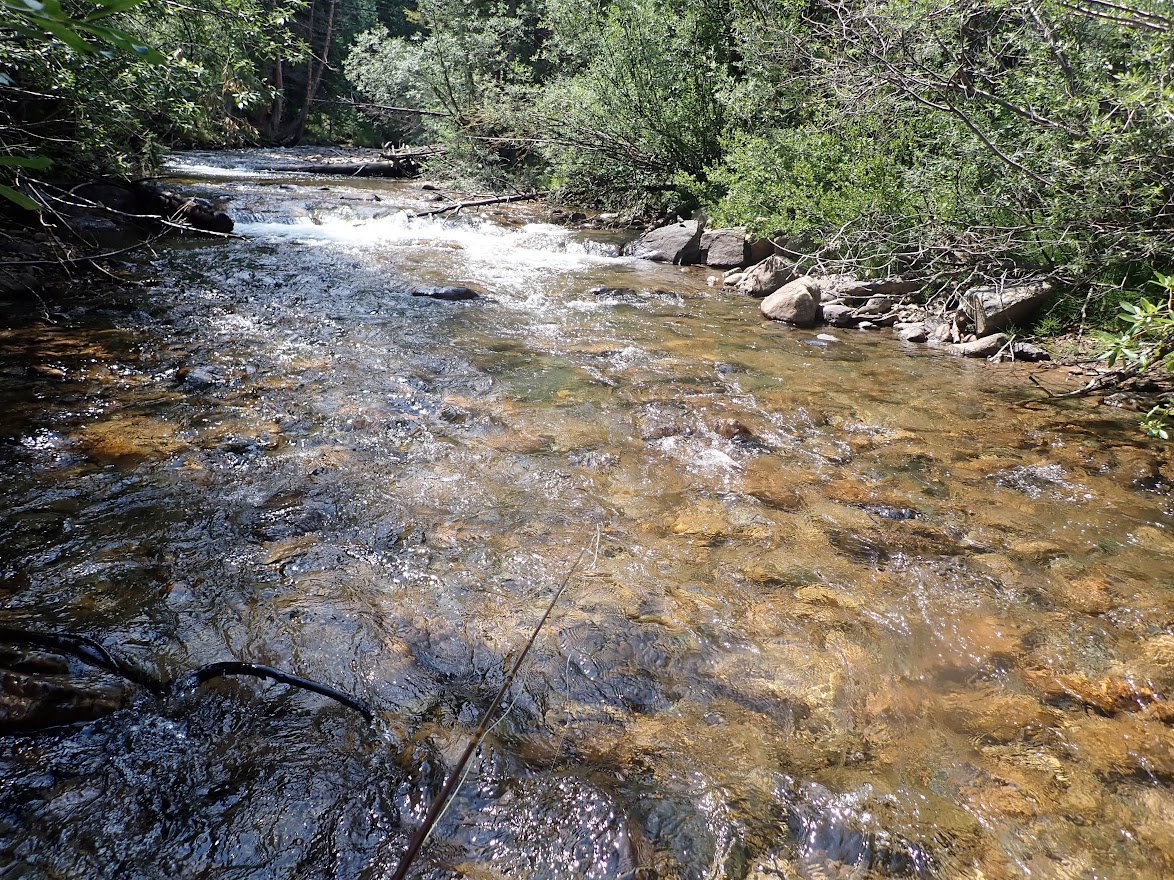 The most productive water types were long runs and moderate riffles. In these places I executed relatively long casts, and the stomper paused for a split second, at which point I lifted the rod tip and felt the rewarding throb of a wild trout. The hippie stomper was typically attacked at the tail of a large pocket in front of a large boulder or next to the bank. Structure seemed to be a key ingredient for the trout that responded to a dry fly.

In summary, my quest for cutthroat trout was a success. I struggled early, but once I dialed in the sunken ant and hippie stomper combination, the action accelerated notably. Was it the flies, or did the fish density increase, once I distanced myself from the path and parking lot? Time of day and the presence of more insect activity may have also played a role in my improved catch rate. I will never know for certain which factor was most important, but I suspect they all had a role to varying degrees. The success of the sunken ants that I tied this winter was another gratifying outcome from my day on Clear Creek. I suspect I will return during the 2021 season.