Location: I70 Overpass west of Hidden Valley exit to near small tunnel before Idaho Springs

The weather on Saturday was supposed to be cool and windy, but still better than Sunday when there was a chance of snow and rain. I was anxious to get in some more fishing before the deterioration in weather following my fun outing on Friday on the Arkansas River. I decided to make a quick trip to Clear Creek on Saturday afternoon after a morning run and a big breakfast. I can reach some nice water on Clear Creek with a relatively short 45 minute drive.

I arrived at a pullout next to Clear Creek below the I70 overpass just west of the Hidden Valley exit by 11:45AM and after downing a sandwich and some carrots, I was on the water by noon. I didn’t want to fish deep with nymphs having done that all day on Friday, so I tied on a Chernobyl ant and trailed a beadhead hares ear nymph. It was quite chilly, probably around 50 degrees, with frequent gusting wind when I began with a thick Adidas pullover windbreaker as my outer layer. I tossed an initial cost up along the left bank while standing next to the I70 bridge support, and as the Chernobyl drifted back it took a dip. I set the hook and landed a small brown on the BHHE on my first cast. 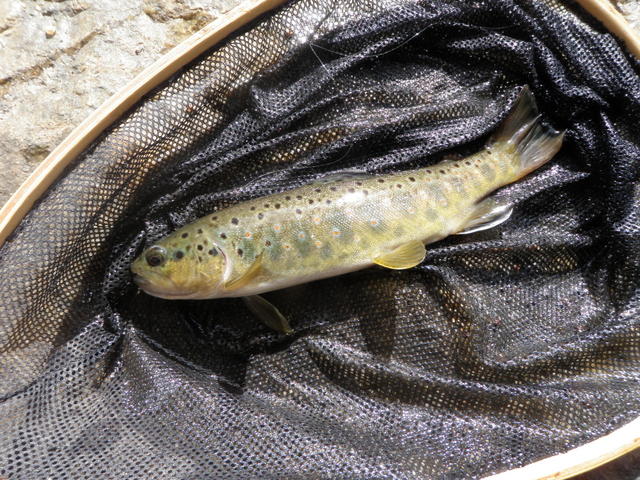 This was an auspicious start, and I was quite pumped for a great afternoon of fishing. Unfortunately as I made additional casts with the Chernobyl ant, I began to see fish inspect the large flashy ant, but then return to the stream bottom. In other words, I was getting refusals and after not taking the fly, I couldn’t tempt them to take the trailing nymph.

I decided to swap the Chernobyl for a yellow Letort hopper, and kept the trailing beadhead hares ear, and then continued rock hopping along the bank. I began picking up fish at a faster clip, but still noticed the occasional refusal to the hopper. Unfortunately for me, the wind gusts were becoming a huge nuisance, and untangling flies seriously cut into the amount of time my flies were on the water. I was fishing in a southwesterly direction and the wind was blowing from the west, and pushing my tailing flies into the extended line on my backcasts. In addition I snapped my flies off on an evergreen tree once and also looped my line over an evergreen branch another time with an errant hook set. I was able to recover the snapped off flies, but had to retie. The looped line incident required me to hang on a branch as I dangled above the earth until I moved hand over hand to a point where my feet rested on the ground.

At around 1PM, I suspected that there might be BWO nymphs in the drift so I added a RS2 beneath the beadhead hares ear, and made the ridiculous decision to fish with three flies. This did not work out well. I caught a decent number of fish in between unsnarling nasty tangles. I probably had 10 tangles over the course of the three hours that required me to clip off the flies and retie. The other problem was fish taking the hopper or top nymph and then mercilessly tangling the trailing flies around itself and ultimately the fly in the fish’s mouth. 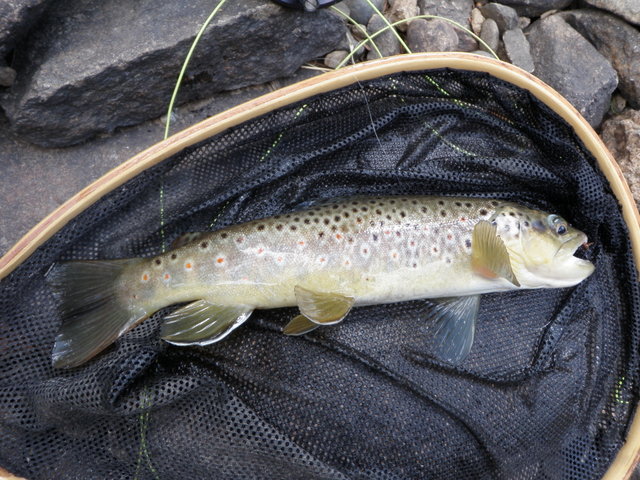 A Monster by Clear Creek Standards

In spite of all this tangle misery, I landed eleven fish by 2:30 by moving along the rocky bank quickly and popping three to four casts in the small slots and pockets between the bank and fast current. The fish were all browns in the 7-9 inch range with an occasional 10-11 inch monster. Two fish inhaled the hopper, one or two nabbed the RS2, and the remainder grabbed the beadhead hares ear. 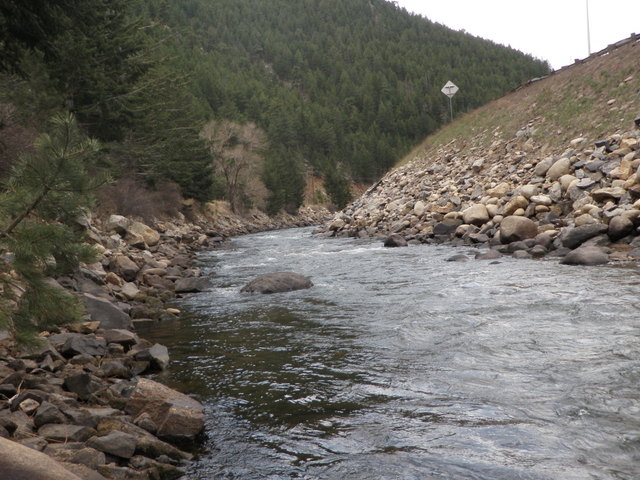 At 2:30 the sky was clouding up more than usual and the wind was picking up and I was frustrated with all the entanglements, so I decided to clip everything off and try a dry fly. I pinched a size 16 dark olive deer hair caddis from my frontpack foam patch and tied it to my line. It didn’t take long for a feisty brown to rise and smash the caddis. I continued moving up the bank at a rapid pace fluttering the caddis in all the likely pockets and caught two more browns bringing my total to 14. At this point it was slightly after 3PM and the sky was even darker and I was quite chilled, so I decided to head back to Denver.

Despite the frustration of the wind and the tangles, I explored a new stretch of water on Clear Creek and had quite a bit of success. I wish I’d gone to the single dry fly earlier to avoid a lot of frustration, but a lesson was learned for future trips.