Location: Below first bridge after Tunnel 1

As I departed the parking lot near Waterton Canyon, I yearned to see a trout nestled in my net on a gorgeous spring-like day in February. My return route took me to the junction of  I70 and C470 near Golden, and that placed me only a few miles east of Clear Creek Canyon. I left my rod in a fully rigged status, so I decided to head west and inspect the conditions on Clear Creek.

After turning left on US 6 I drove west through the narrow canyon for approximately three miles, until I reached the first bridge crossing over the creek. The pullout was completely vacant, so I pulled over and gazed down at the flowing water along the highway. The stream bed was mostly ice free with only a few sections with small ice shelves, so I decided to test the waters for an hour or two. I climbed back into my waders and wading boots and grabbed my Sage One five weight, and then I crossed the highway and hiked downstream below the bridge for five minutes before I carefully maneuvered over a rock jumble to the edge of the stream. 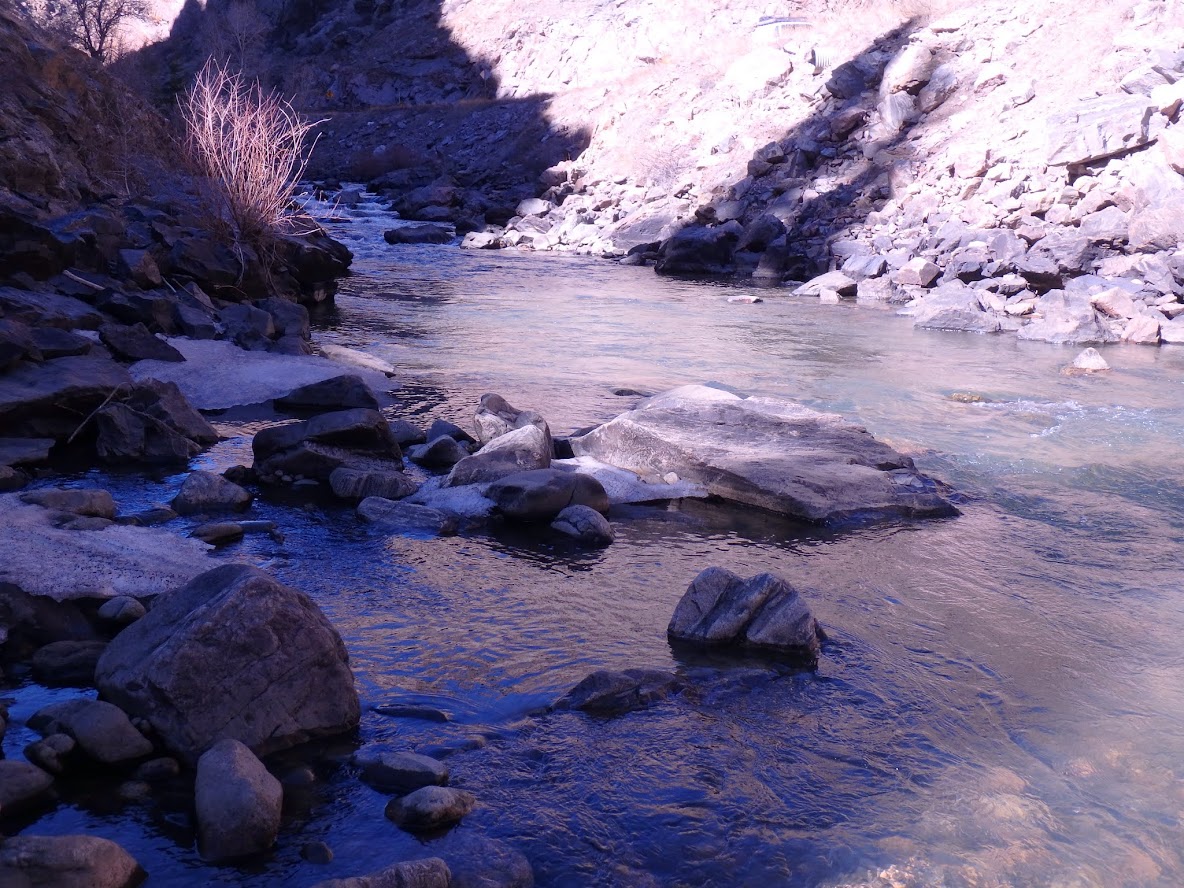 I initiated my renewed quest for trout number one with a pine squirrel leech and salad spinner, but after a few futile probes of deep runs and pockets, I exchanged the tiny clear thingamabobber for a bright orange version. This improved the visibility, but the fish did not cooperate with a tug, so I once again paused to revise my approach. I removed all the deep nymph paraphernalia, and changed to a dry/dropper setup. A yellow fat Albert was attached as the surface indicator fly, and beneath it I added a beadhead ultra zug bug, and I retained the salad spinner.

This configuration endured for at least 45 minutes, but again I was stymied in my efforts to land the first trout of the year. As I slowly moved along the narrow stream and probed likely locations, I thought I observed a pair of refusals to the fat Albert, and this prompted me to exchange it for a size 8 Chernobyl ant with brown and black barred legs. If fish were refusing the fat Albert, perhaps the more subtle low riding ant would induce them to eat? Unfortunately as I advanced, I continued to experience only arm exercise with no signs of fish. I was in the shadows in the early afternoon, and the dim light and low riding Chernboyl made following my flies challenging.

The lack of action caused me to lose confidence in the ultra zug bug and salad spinner, so I responded by swapping a beadhead hares ear for the salad spinner. The hares ear is one of my most reliable flies year after year, so why not give it some time on my line? At 1:30PM I approached a nice shelf pool on my side of the creek, so I lobbed a couple casts to some deep water between the point of an exposed rock and some faster water. Just as the Chernobyl drifted into the slow moving shelf pocket behind the rock, I detected a pause and reacted with an abrupt hook set. The tip of the rod throbbed as I connected with a fish, and I quickly recognized a brown trout, as it swirled and deployed ineffective escape maneuvers. I maintained tension and gradually guided the eleven inch brown trout to my net, and then I snapped a couple photos and a brief video, as I released the valiant fighter into the ice cold winter flows. I was not surprised to learn that the hungry brown trout gulped the trusted hares ear nymph. 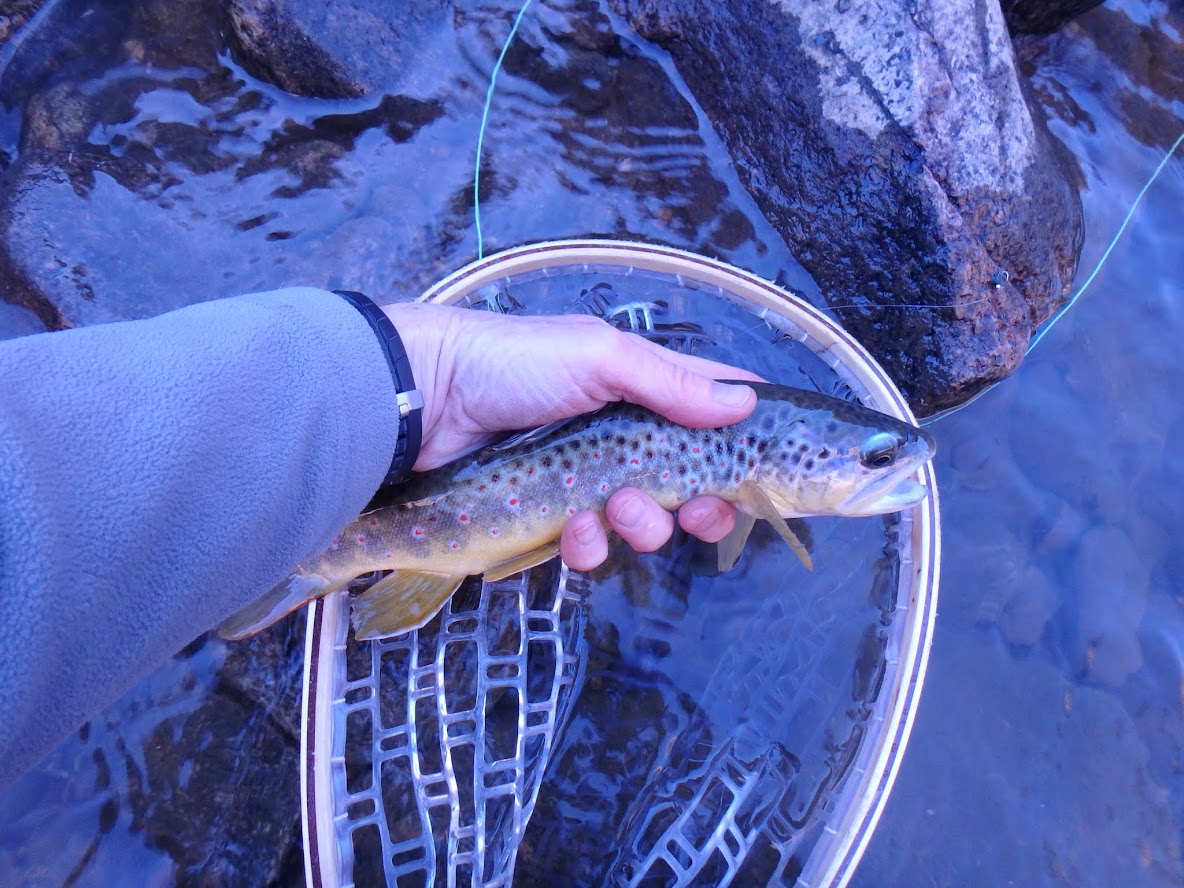 When I resumed fishing, my left hand grew stiff and began to ache as the moisture quickly evaporated in the dry mountain atmosphere. I realized that I was approaching the bridge, and only a few more attractive spaces remained, so I braced myself against the chill and fished on. Surely additional trout were in feeding mode as a result of the unseasonably warm temperatures. Alas this was not the case, and I reeled up my line at 2PM and called it quits. I managed to land one trout on February 16, but that was enough to activate my dormant fervor for fly fishing. Let the fish counter begin. 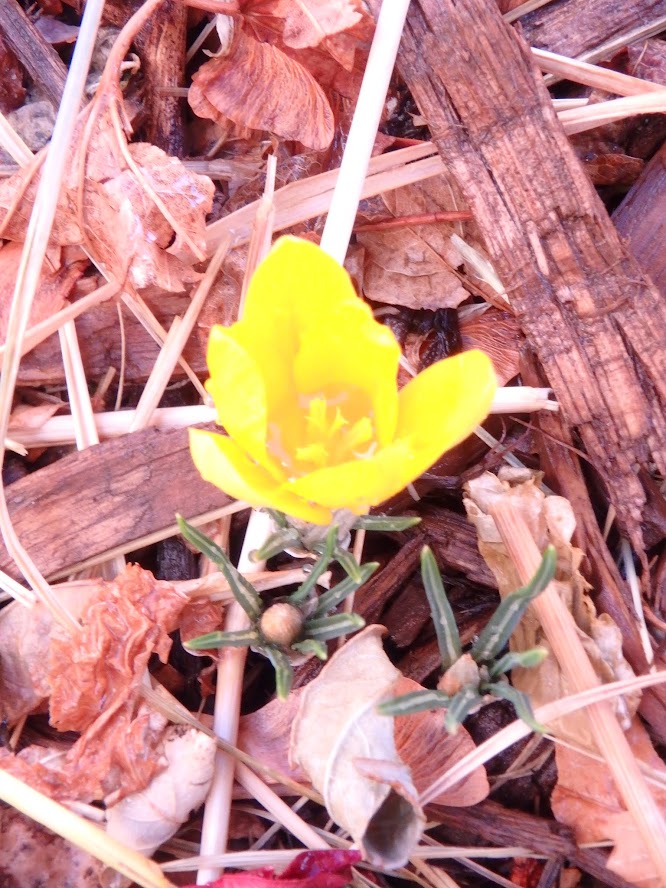