We returned from Reudi Reservoir on Thursday, and Jane and I stopped to complete the Eagle Lake hike along the way. Glenwood Canyon was closed from 9:00AM until 3:30PM on Thursday for rock slide work, so Jane and I decided to negotiate the Eagle-Thomasville Road. I read several books that warned not to drive this rough dirt road after rain, since it is essentially impassable when wet. Fortunately we did not encounter any significant rainfall, and we completed the taxing drive. The section from Thomasville to the trailhead to Eagle Lake contained numerous deep ruts created by the heavy logging trucks during mud season. Successfully traveling this area depended on balancing the vehicle tires on the high ground in order to avoid sinking into the deep tire tracks.

The eight mile drive from Eagle Lake over Crooked Creek Pass and ending at Sylvan Lake was new terrain to us. The difficulty in this area was extremely rocky sections that forced us to travel at maximum speeds of 5MPH, as driving faster would have risked the loss of fillings from our teeth. Another hindrance to progress was a two mile section where the road surface consisted of an inch thick layer of red dust. It was obvious that rain could convert the roadbed into a slick red clay slip and slide in a small amount of time.

I relaxed on Thursday evening and decided to squeeze in another day of fishing on Friday. After reviewing the stream flow data for the nearby Front Range drainages, I selected Boulder Creek west of the city of Boulder as my destination. The DWR data displayed stream flows at 80 cfs, and I knew from trips in early spring that this level was close to ideal. I drove up Canyon Avenue for eight to ten miles, until I reached the area where the gradient is quite steep. I selected this segment with the assumption that most fishermen gravitate to the tame water closer to Boulder, and with flows in the ideal range, I did not mind undertaking some stream side bouldering. I expected to have a fun day catching 6-10 inch brown trout on dry flies. This expectation pretty much held true except for one significant deviation. 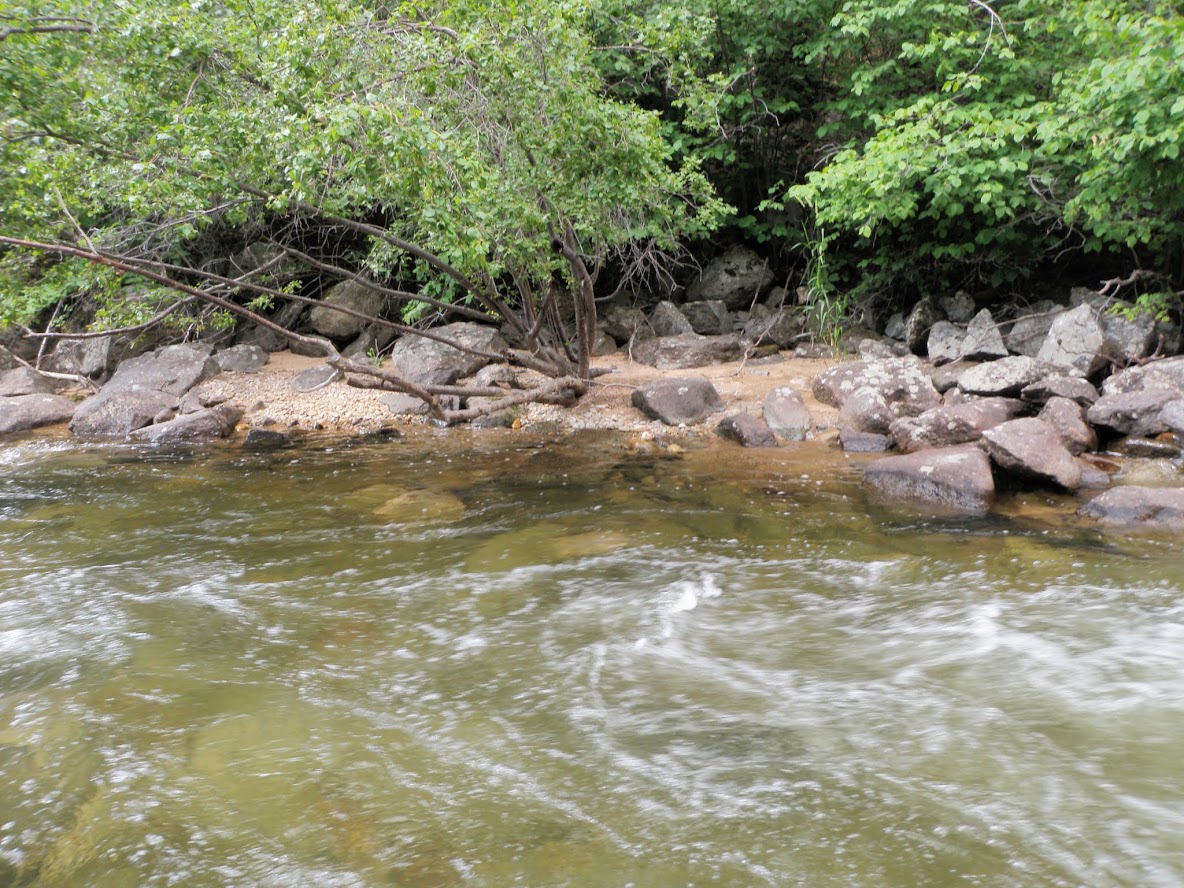 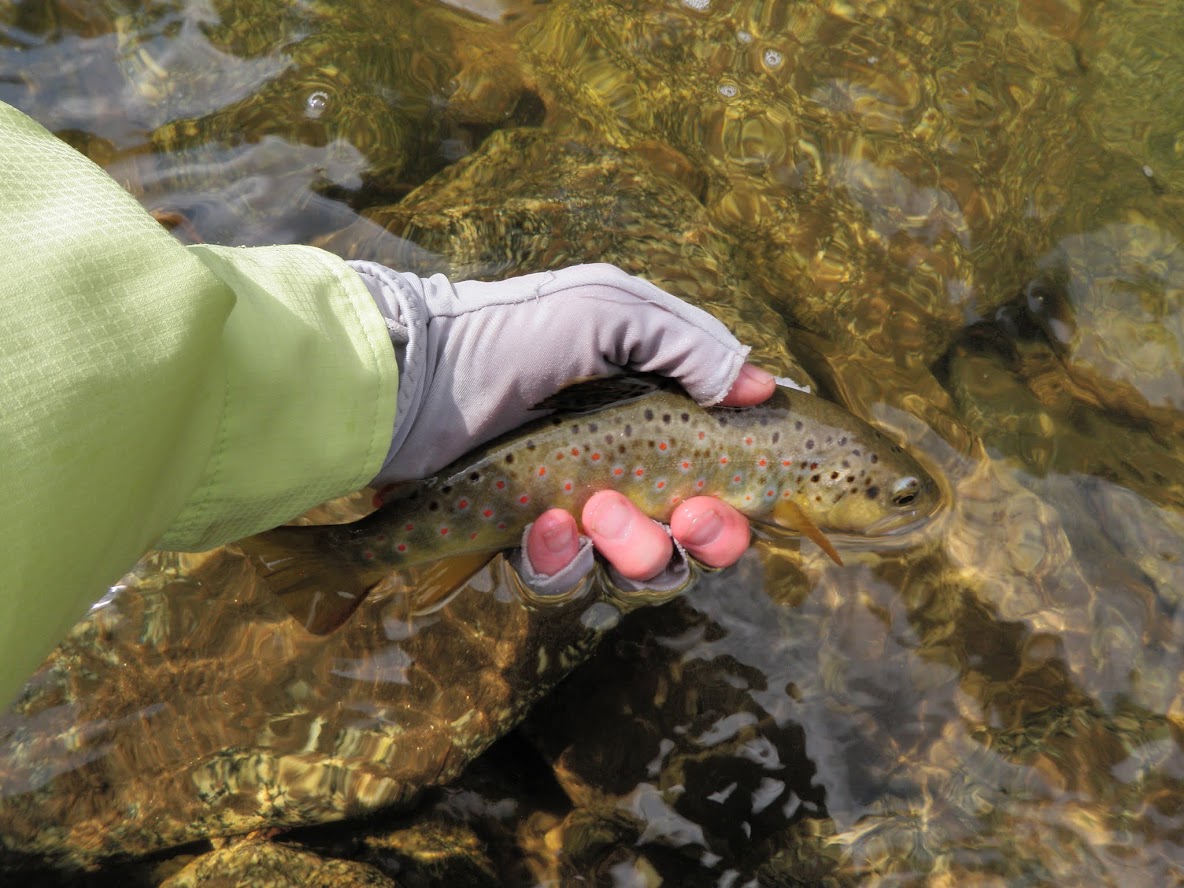 I departed Denver at 9:20, and by the time I rigged my Loomis five weight and climbed into my waders and approached the edge of the creek, it was 10:30. I considered wet wading, but the temperature was 70 degrees, and some big gray clouds in the western sky indicated that rain was a possibility. I decided to begin my day with a size 14 gray stimulator, and it was a good choice. In the first two attractive pools, the stimulator was ignored, but then it began to draw the attention of the small stream residents. I popped the heavily hackled attractor in all the likely spots where trout might lie in wait for food, and I was fortunate to land eight fish by the time I broke for lunch just below the Santa Fe at 11:40. This may sound like spectacular fishing, and it was quite good, but the number of refusals outnumbered the takes, so there was that element of frustration. I did not build the satisfying level of confidence that accompanies consistent takes without rejection. 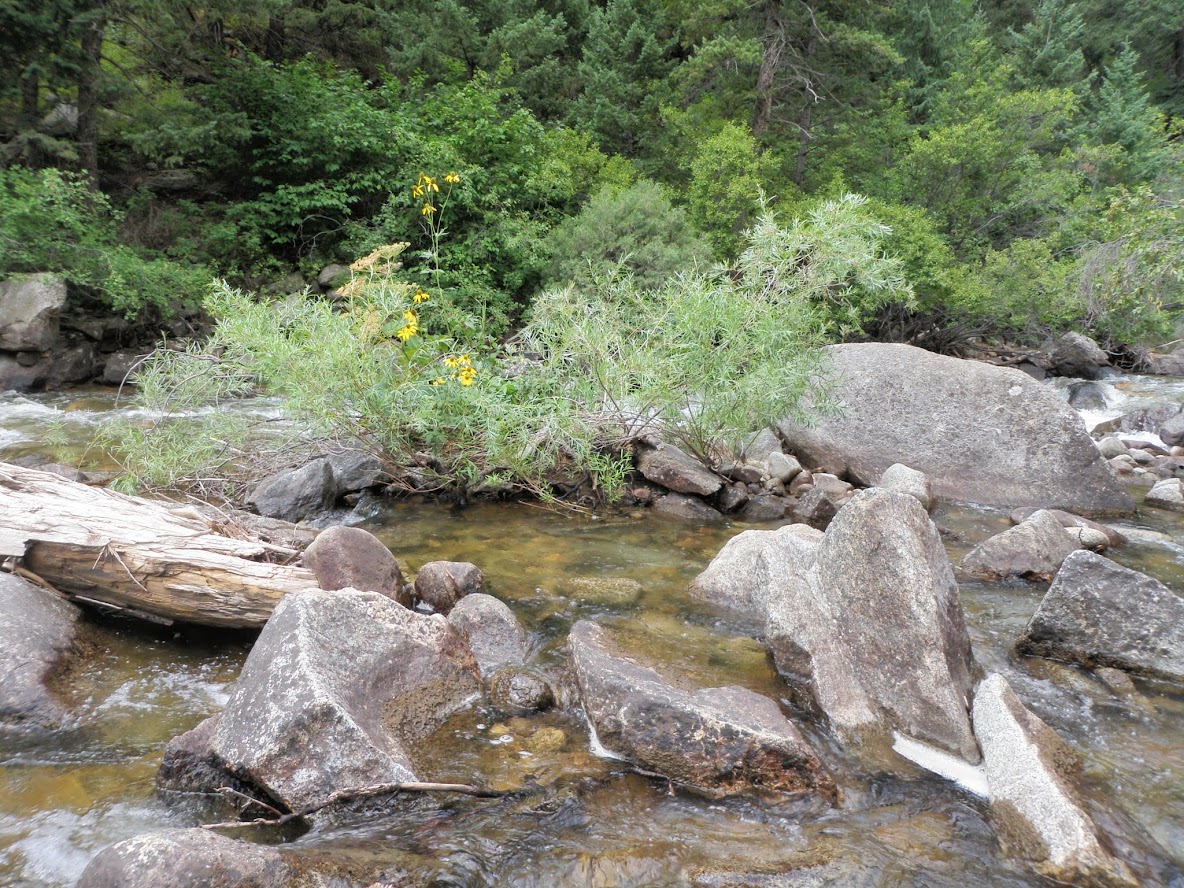 After lunch I decided to experiment with some changes in an attempt to lower the refusal count. First I tied a Jake’s gulp beetle to my line and added a size 18 beadhead pheasant tail as a dropper. I was hoping that a pale morning dun hatch might materialize, thus the pheasant tail. The gambit was unsuccessful, but the beetle drew a few looks, so I concluded that the fish were looking toward the surface for their meals. In response to this supposition, I clipped off the dry/dropper and reverted to a single dry fly; however, this time I knotted a size 14 light yellow stimulator to my line. This fly served me well on the Conejos River and Elk Creek, so I guessed that it might be popular with Boulder Creek trout. 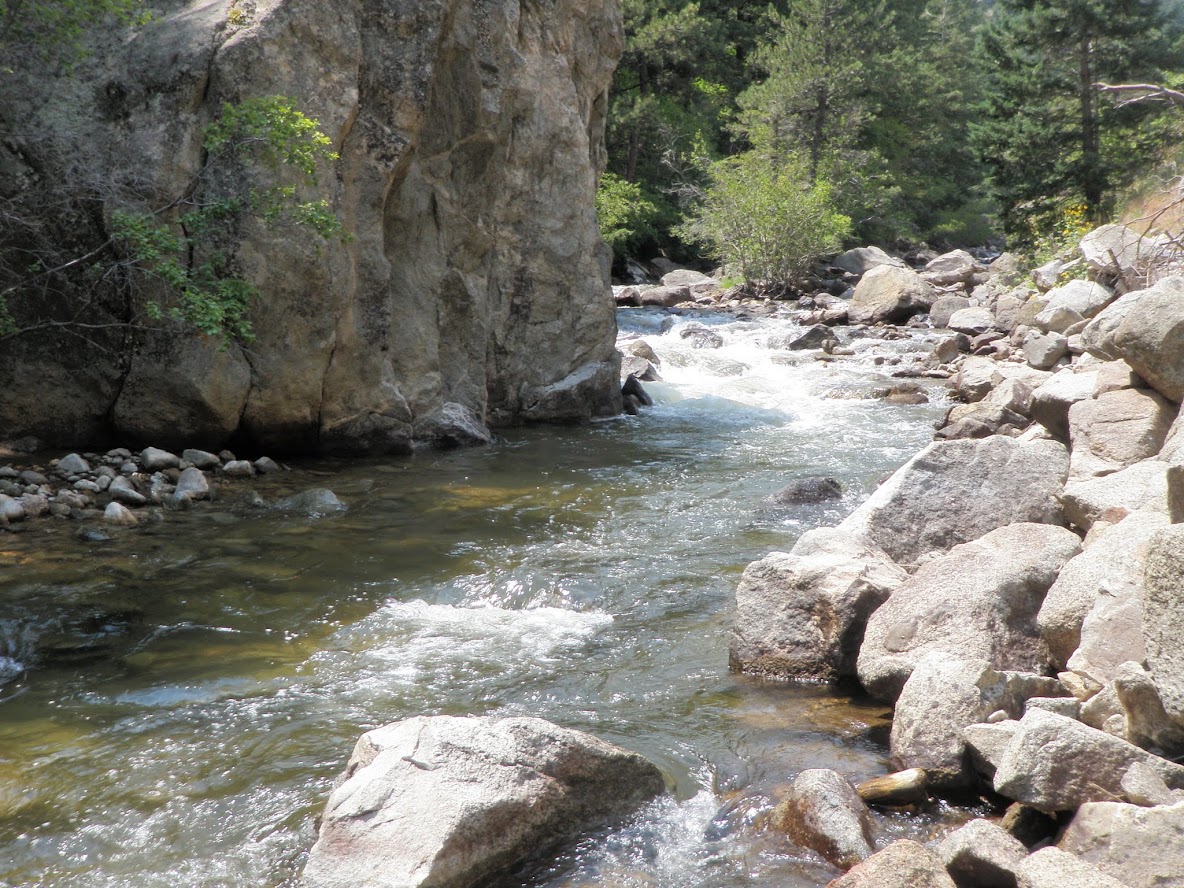 The supposition was partially correct as I landed two more fish to build the fish count to ten. I was satisfied that I reached my goal for the day, so I once again made a change. The dry/dropper method on the upper Frying Pan River on Wednesday was dynamite. Could the same be true on Boulder Creek, or would the fish refuse the large top fly and ignore the subsurface offerings? I tied a tan pool toy hopper to my line and then connected a beadhead hares ear and salvation nymph. This was the very same lineup that produced prodigious quantities of trout on the upper Frying Pan.

It worked. I continued migrating up the narrow steep gradient stream while popping the dry/dropper combination in all the likely plunge pools and deep eddies, and this process incremented the fish counter by six. Number sixteen was the largest fish of the day at thirteen inches, but it squirmed free as I was in the process of posing it for a photograph. The home of this fish was a very deep hole behind a large bank side boulder. The current swirled around the point of the rock and then eddied back to the nexus of the pool where a large foam patch covered a large segment of the surface. The pool toy darted back toward the foam, and this clued me to set the hook in order to land the thirteen inch wild brown. 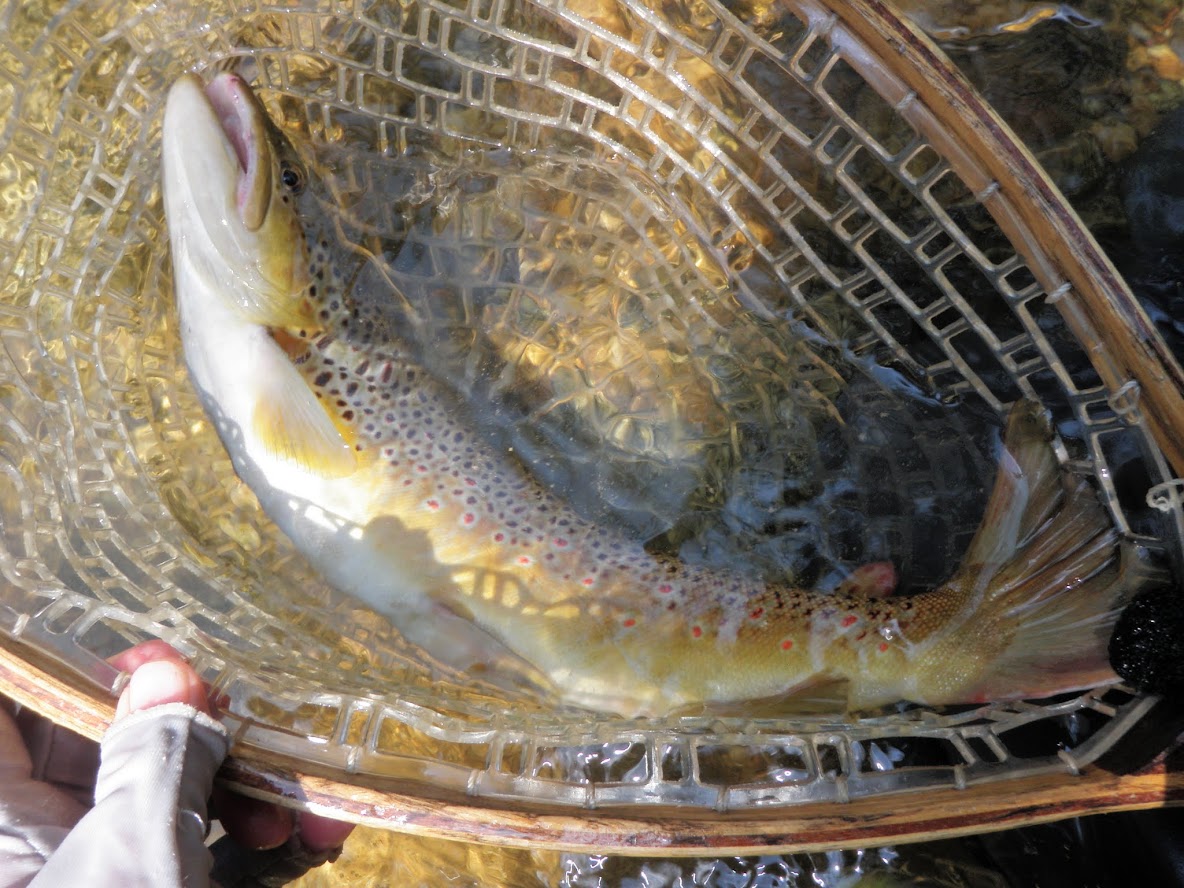 I was frustrated by my inability to maintain a grip on the elusive brown for a photo, so I decided to continue probing the deep eddy. I backhanded a couple casts to the foam, and on the third effort, as the pool toy danced to the vortex, a large figure elevated and grabbed one of the trailing nymphs. I could not believe my eyes, but I had the presence of mind to lift my rod and made a solid hook set. Immediately the oversized brown recognized that the food in its mouth was a hook, and it began to dive, thrash, roll and spurt; but I maintained solid pressure and after a few minutes, I guided it to the edge of the bank below me. My net barely contained the huge flopping catch, and I could barely contain my glee. I have caught larger brown trout, but an eighteen inch fish from a small stream that rarely produces fish over a foot long was quite an achievement. Surprises like this are what make fly fishing my favored pastime. 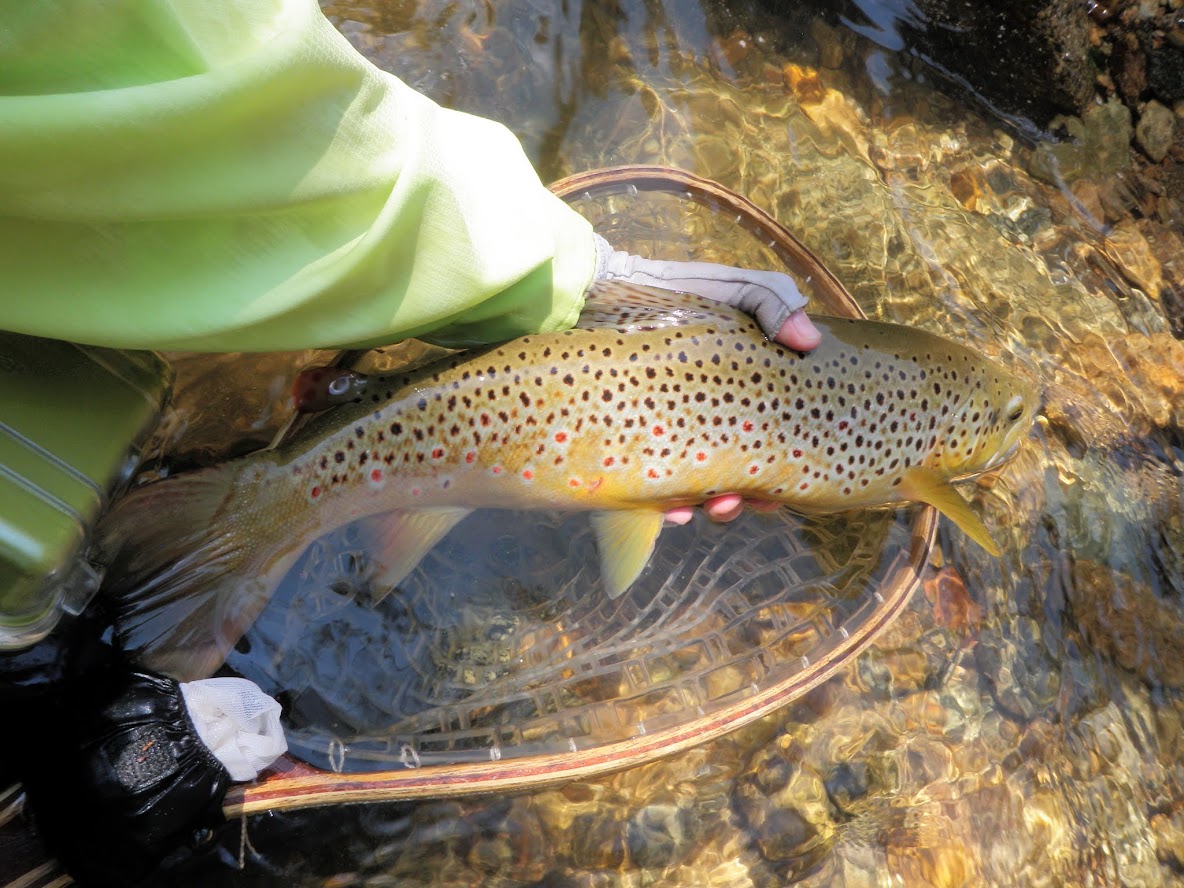 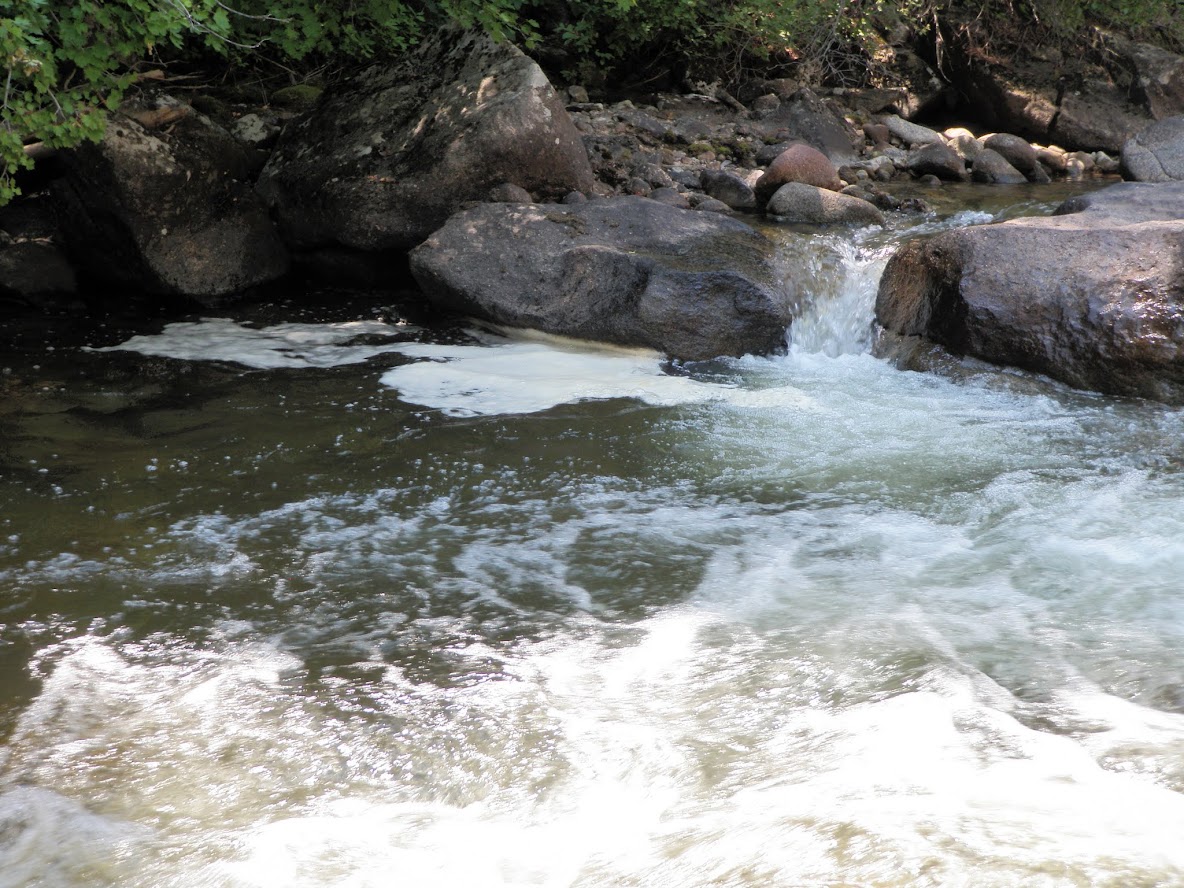 The Lair of the Boulder Creek Lunker

After carefully releasing the behemoth to fight another day, I moved on. It was 2 o’clock, and I hoped to reach twenty fish and depart no later than 3PM, since Jane and I made plans to meet some friends for happy hour at Union Station at 5:30. I began casting at a nice pool a bit upstream from the productive eddy, when movement caught my attention. I glanced up and noticed a young man fidgeting with a clamp, and I realized that I was fishing directly below a short zip line that transported rock climbers over Boulder Creek. The young rock climber secured a large hook to his belt, and then he used a hand over hand technique to slide upside down above the creek and me, until he reached the side next to the road.

I resumed my quest for trout and landed three more by 2:20 when I approached a section characterized by whitewater chutes and waterfalls. This obstacle was enough to convince me to call it quits, so I climbed the steep bank and hiked along the shoulder until I reached the car. Several new arrivals parked behind me, and they were readying their gear to begin their day of rock climbing.

Friday was another wonderful day of fly fishing in July. The weather was perfect, the brown trout were hungry, and I managed to pull a small stream lunker into my net. July has been a spectacular month.