Location: Next to the parking lot.

The objective of our trip to Salt Lake City was to spend quality time with our daughter, Amy, who is nearing the end of an internship in Murray, UT. Of course I can never stop pondering fishing, so I tossed my fishing rods, waders, wading boots, net and fishing bag in the back of the Santa Fe before we departed on Thursday, September 22. I performed a small amount of research on fly fishing near Salt Lake City, and this caused me to focus on the lower Provo River Canyon. On Friday while Amy worked I hoped to explore the lower Provo, while Jane enjoyed a hike in the vicinity.

Before we departed Denver I checked the Salt Lake City weather, and I was disappointed to see a prediction of precipitation and cool temperatures for the area on Thursday night and Friday. In fact the probability of rain ranged from 70 – 90% for most of Friday September 23. Unfortunately the weather prognosticators were accurate, and it rained quite heavily on Thursday night, as we unpacked the car and moved our luggage into the hotel that we reserved for four nights in the Sugar House section of Salt Lake City.

Friday morning was extremely overcast, but as we ate breakfast and walked to the supermarket for supplies, raindrops were not present. We prepared to make the trip to Provo Canyon, but before driving south we stopped at a fly shop in Sugar House for information. I was not pleased to learn that the minimum amount I could spend on a non-resident fishing license was $24 for a three day pass. Given the adverse weather forecast, I was reluctant to pay $24 for what could be an hour or two on the river. The young man behind the counter suggested that, if I possessed a smart phone, I could buy the license online once I reached the river. Hedging my purchase until I investigated the stream and weather seemed like a smart approach. Armed with this new plan of action, Jane and I departed and drove south for forty-five minutes on interstate 15, until we exited and proceeded on Canyon Boulevard through Orem and up the lower canyon. 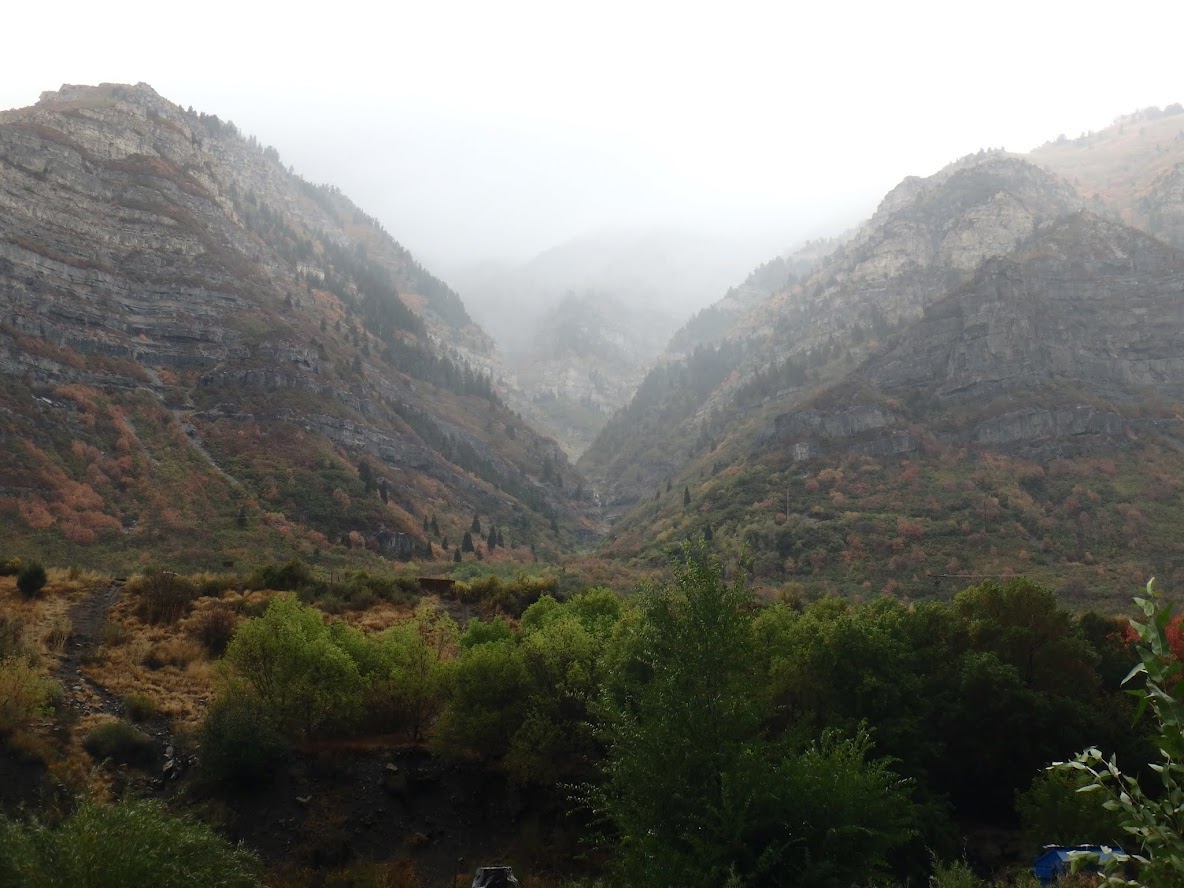 We were looking for a trail to hike along the river, so that I could obtain a closer look. The young man in the fly shop suggested we drive beyond the tunnels, and as it turned out, the tunnels were next to each other halfway up the lower canyon; one for eastbound traffic and one for westbound. We thought he meant successive tunnels when traveling in the same direction, so we drove east until we reached the dam. We exited US 189 and entered a parking lot, where we stopped and prepared to hike. The signs were not very helpful, but eventually we stumbled across a two mile bike lane on a frontage road, and we followed this to an overlook of the river and then returned to the car. As this short hike transpired, some dark clouds appeared on the southwestern horizon, and I was reluctant to spring for the fishing license.  We later discovered a fine fifteen mile bike trail that would have been perfect for us to explore in the lower canyon. 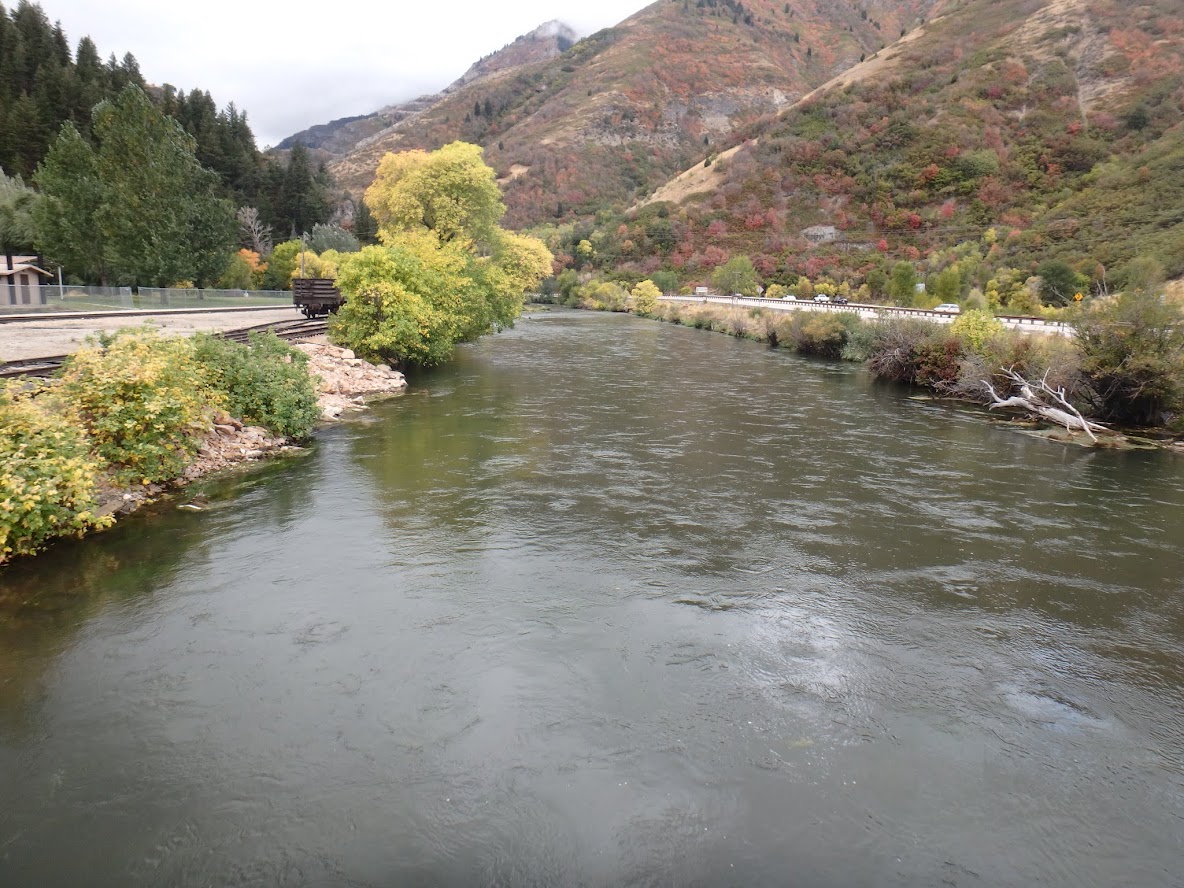 The Provo River at the Train Stop

We hopped back in the car and slowly negotiated the curving US 189 back toward Orem. We stopped at nearly every pullout and park along the way, and I made a point to evaluate the river. By 11:30 the dark clouds hovered overhead, and sheets of rain descended upon us, although the periods of rain were intermittent, and I probably could have fished. In fact the overcast skies and cool temperatures may have been ideal conditions for a blue winged olive hatch, although I never observed such an emergence during my brief survey of sections of the stream.  I was also reluctant to abandon Jane in an unknown environment in adverse weather. In addition to the off and on rain, the air temperature lingered in the upper forties, and I typically do not enjoy fishing in cold conditions. 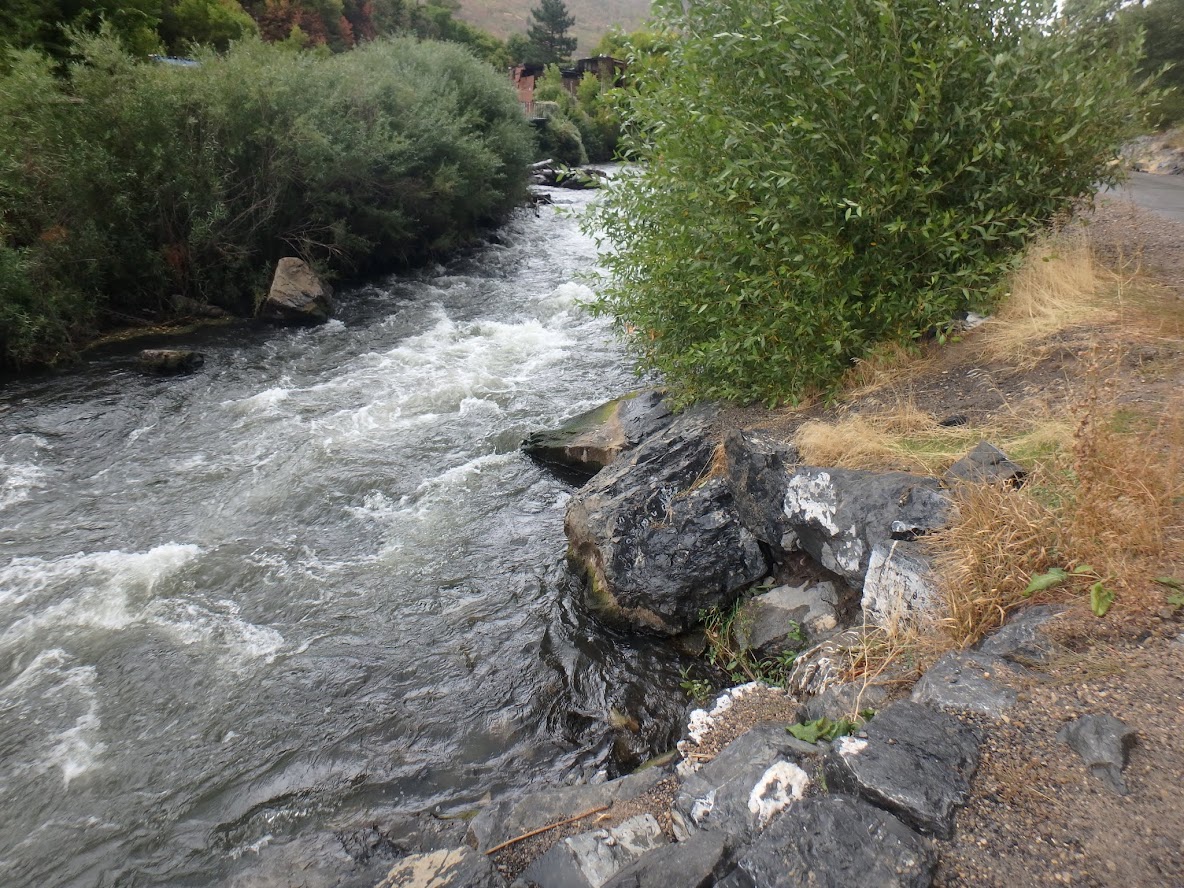 A Churning Section of River Near the Falls

In conclusion I never fished on Friday, and instead enjoyed a day of scouting the river and sightseeing with my lovely wife. My first impression of the Provo River is that it would be fun to fish. A few of the spots I observed looked like large wide troughs, so in the absence of a hatch, it might be difficult to select a place to cast. The area near Bridal Veil Falls offered quite a bit of structure, but it seemed like a whitewater chute at the water levels of September 23. Since I never fished there, I have no basis for comparison regarding the flows. 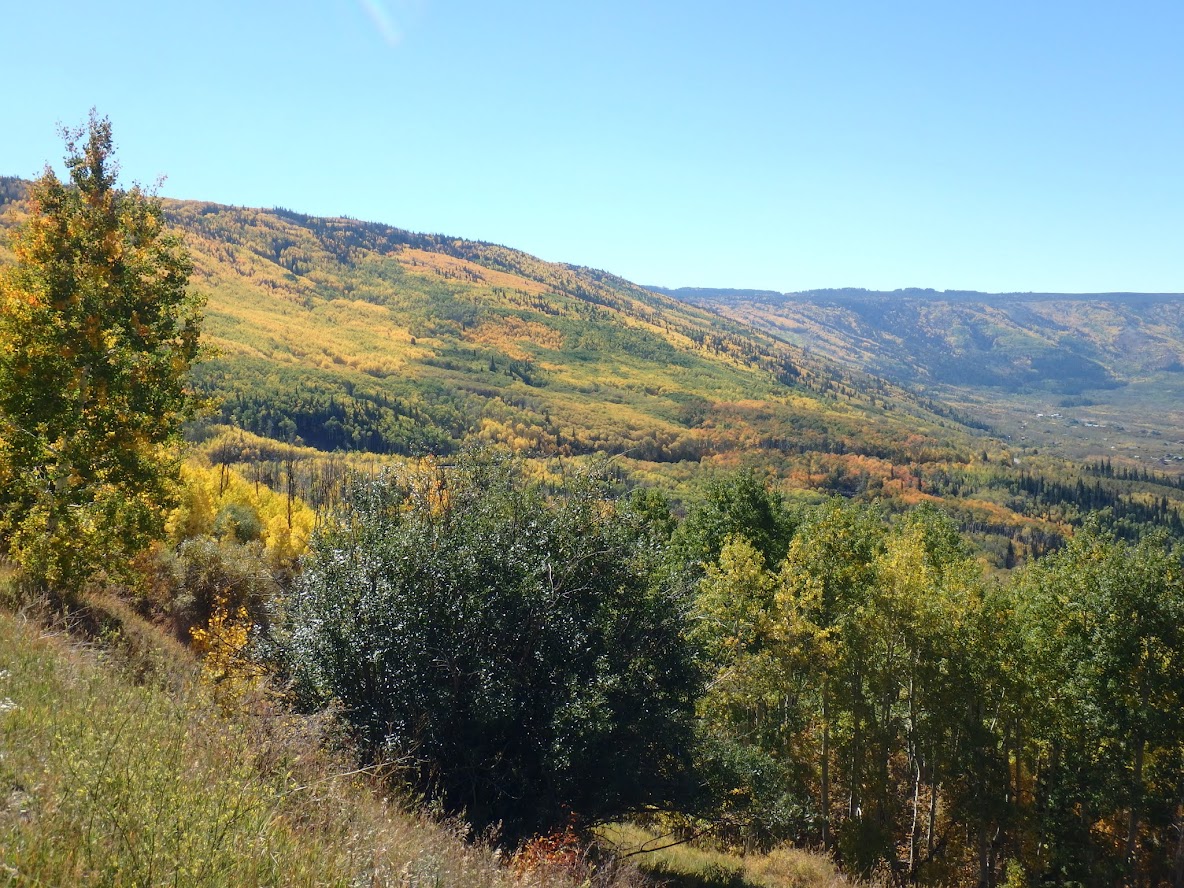 A Wave of Color

The remainder of the weekend was spent hiking and biking with Amy and Jane, but I persuaded Jane to stop in Delta, CO on the return trip, so I could sample the lower Gunnison River. On Monday morning we departed Salt Lake City and traveled in a southeasterly direction until we intersected with interstate 70 just west of Green River, UT. Since neither of us ever visited the Grand Mesa, we followed interstate 70 beyond Grand Junction and then exited and traveled south over the Grand Mesa on route 65. What a trip! The leaves were slightly past their prime, but the layers of yellow, light green and evergreen were stunning; and Jane and I made slow progress, as we stopped frequently to snap photographs.

I read about two areas that offered numerous hiking trails, so we targeted the first one, Mesa Lakes. We easily found the recreation area and parked in the fisherman parking lot overlooking Sunset Lake. Jane and I planned to complete the hike around Mesa Lake, but at the time we mistook Sunset for Mesa and began to circle the small dazzling body of water. After we crossed the berm that served as a dam, we entered the north facing trail, and it was a quagmire of mud due to weekend rain. Wishing not to cake our shoes with mud clods, we turned around and reversed our direction to the parking lot.

We were now curious to understand if there were other trails, and whether Mesa Lake was at a different location. We walked along the paved roadway between four lakes and never found an obvious trail that fully circled a lake. Despite not finding our chosen trail, we did hike for thirty minutes and along the way passed Beaver Lake next to Mesa Lodge. There were several spin fishermen present, as well as a woman who was tossing flies. I ambled to the edge of the lake and spotted numerous decent trout cruising within 30 – 50 feet of the shoreline. 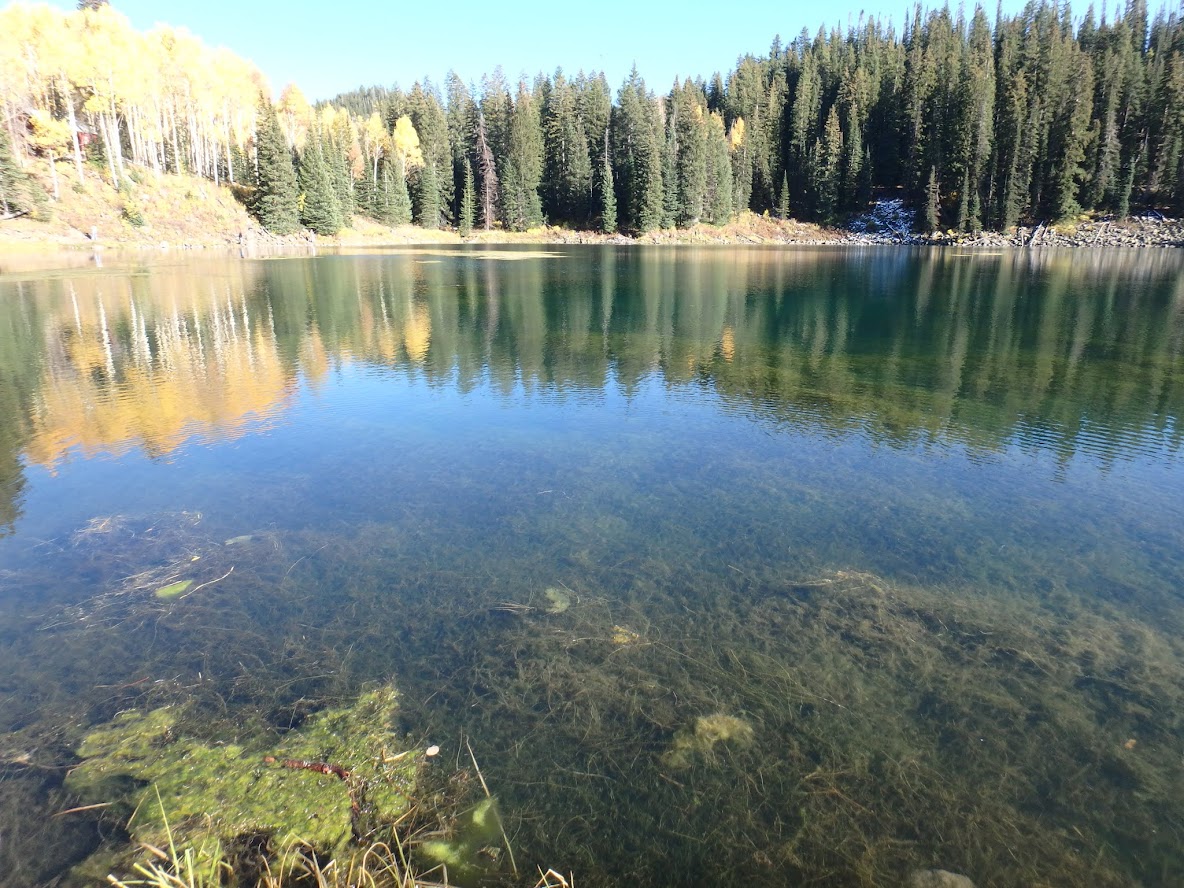 My Fishing Spot on Monday

Of course this scene caused my addiction to flare up, and I asked Jane if I could fish for a bit, while she extended her hike. She quickly acquiesced, so I grabbed my Sage four weight, front pack and backpack and found a spot near the cluster of cruisers. I tied a tiny size 18 caddis adult with a cream body to my line and made a couple casts to the vicinity of a recent rise. Small rings dappled the smooth surface of the lake on a regular basis, and this only served to heighten my enthusiasm for duping one of the lake prowlers. The shadow of my line spooked one of the visible fish, and it immediately bolted for deeper water.

This was not going to be easy. I concluded that I needed to make longer casts and then allow the fly to sit motionless until cruisers returned after being spooked by my cast. I began executing forty foot casts, which taxed my distance casting ability, and I directed the casts to the area that displayed the largest concentration of riseforms. In addition I added a tiny size 22 griffiths gnat to the caddis on an eight inch dropper. 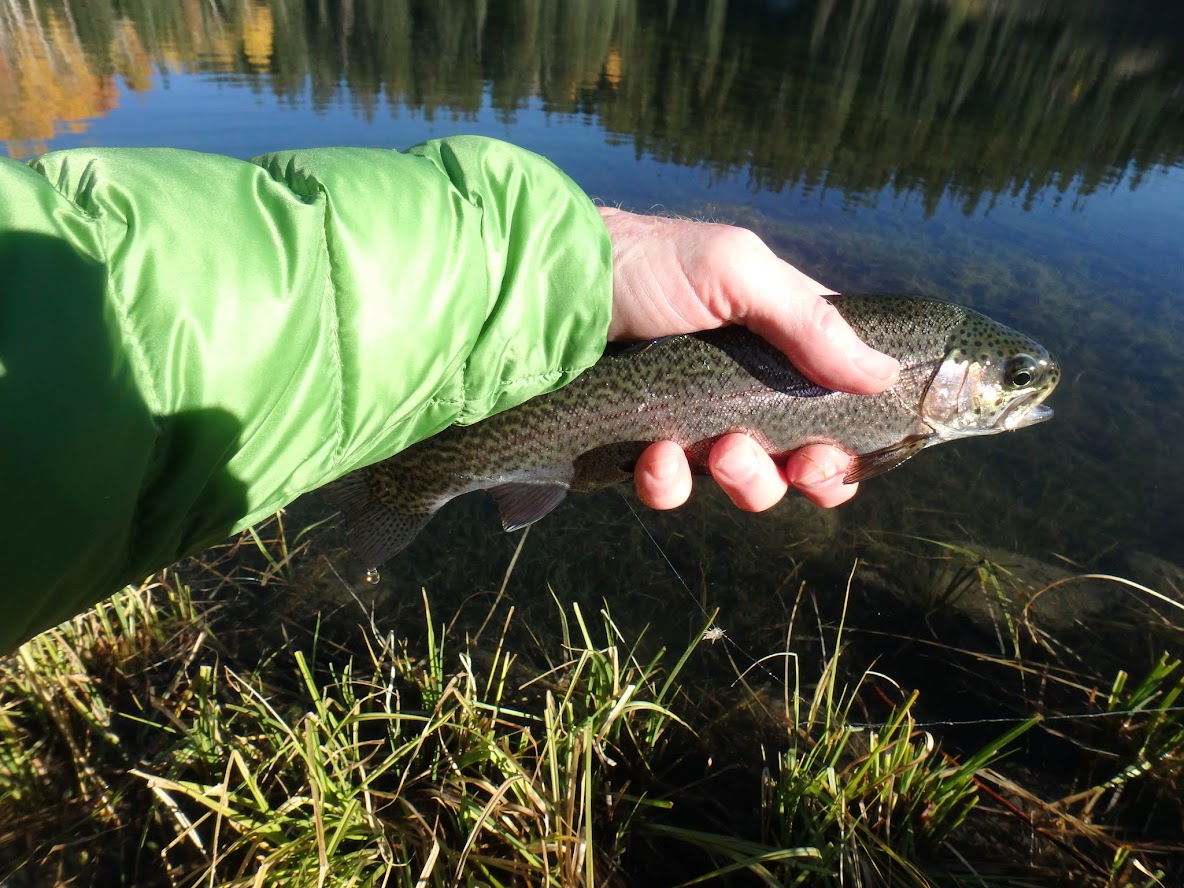 It worked. Over the remainder of the hour I spent at Beaver Lake, I landed two rainbow trout with the largest measuring eleven inches. Both appeared to be stockers, and they slashed the griffiths gnat after my flies sat motionless for what seemed like an eternity. In addition I witnessed several refusals and two momentary hook ups. I enjoyed myself casting to stillwater cruisers for an hour, and then sensing Jane’s growing impatience, I called it quits, and we continued on to Delta, where we found a room at the Riverwood Inn.