A day of fishing is better than a day at work, but not all fishing days are created equal. The Arkansas River humbled me on Tuesday April 25. I surrendered in my annual search for the caddis hatch, and I am increasingly convinced that the caddis hatch is a myth manufactured by the fly shops in Canon City and Salida. Despite my recent repudiation of the relentless search for the dense caddis hatch, I recognize that the Arkansas River is a quality fishery, and it offers the opportunity to land some fish that are on average larger than many of the closer front range streams. In addition a fine blue winged olive hatch continues to provide solid action for anglers who make the visit, and for these reasons I decided to make the long drive to the Salida area.

The flows near Salida were in the 400 cfs range according to the DWR chart, and the fly shop reports indicated solid clarity. In all likelihood run off conditions will commence in a couple weeks, so I intended to prospect the water one last time. Most of my fly fishing equipment remained in the car from my Monday venture, and this enabled me to depart my house in Denver by 6:45. I knew the high temperature was expected to peak at 56 degrees in Salida, so I anticipated cool weather, but I did not plan to drive through snow and light slush during my time in South Park. I arrived at the pullout near the Chafee/Fremont County boundary at 10AM, and I pulled on my heavy Under Armour undershirt to combat the cool temperature. Unfortunately the four letter word of fly fishing announced its presence, and I battled stiff gusts of headwind during my entire time on the water.

Since it was a weekday, I assumed that the number of fishermen would be down compared to the weekend, but an Instagram contact warned me that crowds might be an issue. Unfortunately he was correct. The East Salida Campground was full, and quite a few of the roadside pullouts were occupied, as I traveled east to my planned destination. Two vehicles were present in my favorite parking area when I arrived, and one gentleman was in the process of preparing to fish. I walked to the edge of the bank and surveyed the river, and I did not see anyone, so I concluded that I could execute my normal crossing to the north bank and avoid the other fishermen.

This turned out to be a faulty assumption. After I pulled on my waders and put together my Sage One five weight, I descended the bank and crossed the wide river at the tail of a large pool. Crossing such a large river even at 400 cfs remains a scary proposition, but I took my time and assured myself that each step formed a solid base for the next shuffle. My heart was pounding when I reached the opposite shoreline, and then I elevated it some more, as I climbed the steep slope to the railroad bed. I was now in my own world as I strode down the rail bed and stepped on alternating ties. I was high above the river and unable to see the near side below me, until I approached the location where the river splits around a small island.

Here I paused to glance downstream, and I was shocked to see two fishermen above the island and two below, and as I shifted my gaze farther east, four additional anglers came into focus. What was going on? How did all these fishermen cross to my side of the river? All my favorite spots were occupied, so I reversed my direction and hiked back along the top of the rim, until I was a good distance above the most upstream fisherman. I carefully descended the rocky bank and found a position next to a nice deep run. I decided it was too early for blue winged olives, so I tied a 20 incher to my line and then added an emerald caddis pupa. I flicked the strike indicator upstream with a backhand cast, and on the fifth drift I noticed a dip and lifted my rod tip. I was pleasantly surprised to feel the throb of a fighting fish, and after a short battle I netted a chunky thirteen inch brown trout with the 20 incher in its mouth. 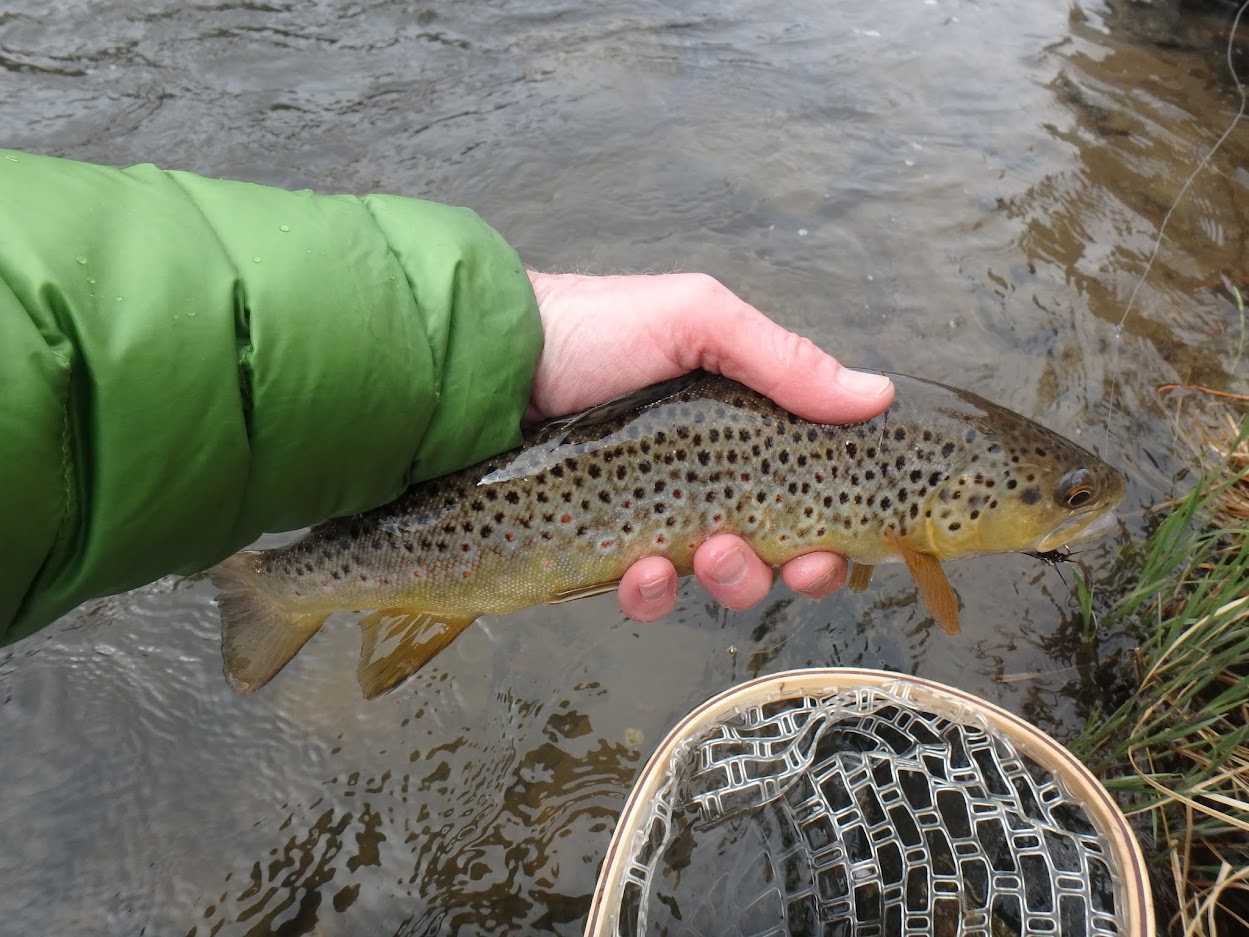 First and Only Fish on Tuesday

What an auspicious beginning to my day on the river! I could endure the wind and competing fishermen, if additional similar outcomes were in my future. Unfortunately that was not going to be the case. During the morning I played hopscotch with two other fishermen, and as one of them passed me, he paused to chat. After exchanging information about our success or lack thereof, he asked how I crossed the river. I told him and pointed to my crossing point. He seemed surprised, so I inquired regarding how he arrived at his current position on the north side of the river. He informed me that his group parked at the Stockyard Bridge and hiked three miles along the railroad tracks with the intention of fishing back to the bridge. It was just my luck to choose the day of the hiking/fishing club excursion to fish on the north side of the Arkansas River. 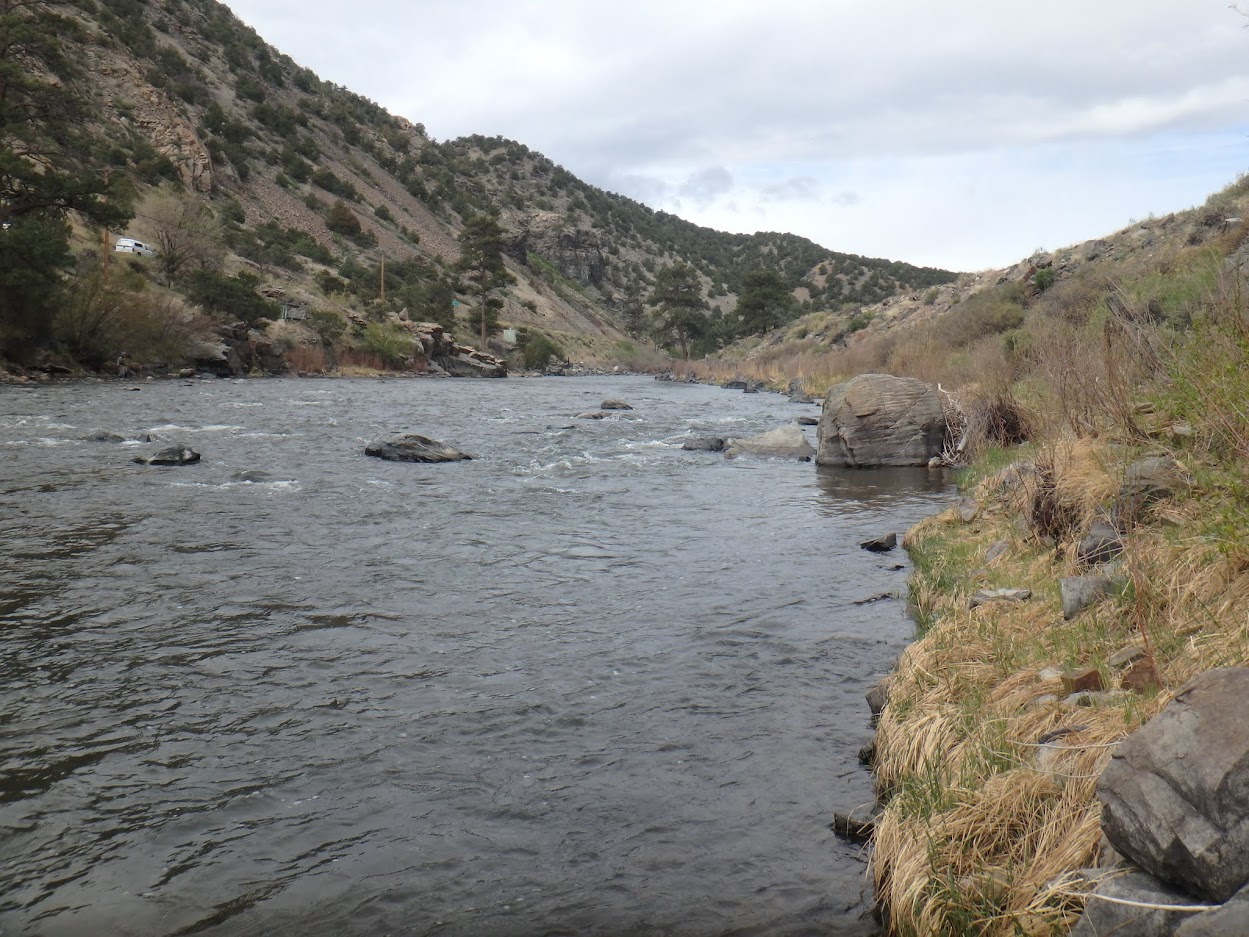 Upstream from My Lunch Spot

I fished intensely for the next three hours and forty-five minutes and failed to land any additional fish. I churned through an iron sally, RS2, and BWO soft hackle emerger; but none of the flies created interest among the Arkansas River trout. The wind continued its maddening rush down the canyon, and I was quite pleased to be wearing my light down coat and my hat with ear flaps. After lunch I managed to create some space from the large group, but the fishing did not improve. For the last hour I remembered the quote, “Insanity is continuing to do the same thing while expecting different results”, so I removed the nymphing system and converted to a dry/dropper arrangement. While these flies were occupying my line, I temporarily hooked up on one fish, and witnessed an exciting refusal from a rainbow trout in front of a large submerged boulder.

During the last thirty minutes I abandoned the multiple fly arrangement and rested my hopes on a size 14 gray stimulator. This fly generated two refusals, and then I hooked a fish for a moment only to see it escape. I reeled up my line to inspect and discovered a pig tail indicative of a poorly tied knot. I replaced the lost stimulator with a medium olive version, and I managed another refusal before I shrugged and hooked my fly to the rod guide at 2:30.

A tailwind pushed me back to my crossing point, and once I reached the car, I changed into my street clothes and said goodbye to the wind, the waves of fishermen and the lock-jawed fish. It was a tough day on the Arkansas River, and I am not sure I will return until after run off. I suspect my next fly fishing adventure will seek out a tailwater that is sheltered from the wind. If anyone knows such a place, let me know.