After experiencing a great day of fishing Wednesday, April 18 I invited Dan to accompany me on another trip to the Arkansas River in pursuit of the major brachycentrus caddis hatch. Typically the hatch begins in Canon City and moves up the river as the water temperature warms closer to the mountains. I hoped that the warm air temperatures of Thursday and Friday would provoke movement in the hatch, and Dan and I could partake of the rare experience of fish throwing caution to the wind and rising everywhere to caddis dry flies.

Dan invited his roommate Adam to join us, so the three of us met at my house at 8AM on Saturday morning. We loaded up the Santa Fe with all our fishing gear and lunches and departed for Canon City and the Bighorn Sheep Canyon. The big decision was where to fish in the canyon so that we would experience the leading edge of the caddis hatch progression. I chose a spot above Salt Lick where I had ended my fishing on Wednesday. Because it was the first outing of the season for Dan and Adam, it took longer than normal to prepare to fish, so we weren’t on the water until 11:30 or so.

It was already quite warm when we began fishing and temperatures would eventually climb to the mid-80’s by 3PM. I should have anticipated that the warm air temperatures would move the timing of all the activity forward in the day, and we should have started the trip earlier, but I was locked into what happened on Wednesday when the conditions were cooler. I began working with Adam and rigged him up with a purple prince nymph as the top fly and a green body caddis pupa as the trailing fly. Adam and I worked up along the bank for a bit, and I demonstrated and showed him how to sling the cast upstream and impart twitching and jigging action to the flies. At one point early on, I spotted a rise above a protruding rock and had Adam place a drift by the far side and he experienced a momentary hookup. I was pretty excited to see some quick success from my pupil. 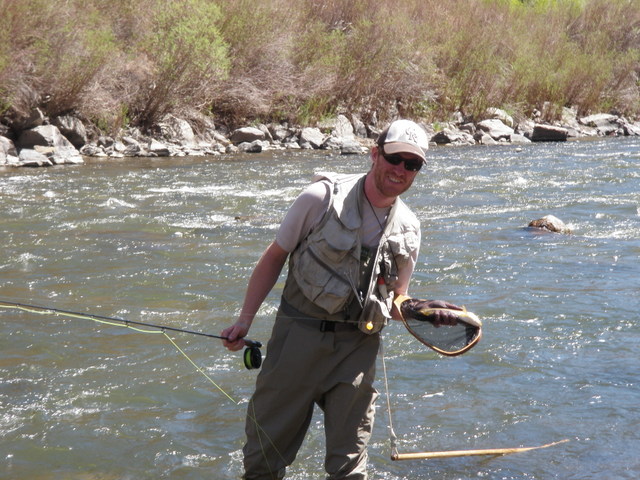 Dan with First Fish of the Day

Meanwhile I tied a prince nymph on Dan’s line from his Christmas fly box and added a bright green caddis pupa. Dan crimped on a split shot, and I showed him how to attach a thingamabobber and he was off on his own. Dan waded out toward the middle of a nice riffle stretch and in short order hooked a nice brown. As Adam and I worked up the bank Dan covered the middle of the river, and he was having decent success mostly on the bright green caddis. At one point while Adam untangled his line, I tossed my prince nymph and bright green caddis combination into some small pockets and landed a 12 inch brown. I resumed working with Adam for a bit after he broke off one of his flies, and watched as he hooked a decent fish in a nice seam. I could see the fish turn and roll on the line and then Adam’s fly came flying back toward us.

After a bit more guiding I felt Adam was self sufficient, and I began focusing on my own fishing more intently. I managed to land a second fish, but things were definitely slower than Wednesday in spite of the fact that I observed a much denser presence of streamside caddis on the rocks and willows. Dan had landed three fish and had another three foul hooked fish, and it was 12:30 so we decided to break for lunch. We climbed the steep rocky bank and circled back to the car and snagged our lunches and took them down to the river and ate in the warmth of the sun.

After lunch we hiked back to where we’d ended our morning and resumed fishing. We spotted some very sporadic rises, and Adam had broken off his wet flies, so he converted to fishing adult caddis imitations. While fishing dries Adam snapped off his fly on one fish and then landed his first fish of the day. Meanwhile Dan suggested that the person who landed the most fish in the afternoon would buy the beer at dinner for all. I picked up a few fish as I moved up along the left bank, but I was covering a lot of water, and the fish were definitely not tuned into the pupa and movement the way they responded on Wednesday.

On Friday night while having drinks at the Vine Street Cafe with friends someone mentioned that everyone had to be a bad ass once in their lives. This led into examples that defined what being a bad ass meant. The group was concluding that I had never been a bad ass.

At one point as I was fishing on Saturday I looked up and noticed Adam standing on a gravel bar with his waders down around his ankles and his shirt off. When I caught up to him I asked if he’d taken a tumble in the water, and he replied, “yes, I got wet”. Adam is 27 and around 6′ 3″ tall and very muscular and was not using a wading staff. After Dan and I decided to leave the area and move to Texas Creek and the three of us were walking back along the shoulder of the highway to the car, I asked Adam to show me where he’d experienced his dunking. He pointed to a narrow channel of the river on the road side of the island. I looked down and saw a thirty foot stretch of river with large bulging waves where the river flowed over huge submerged boulders. 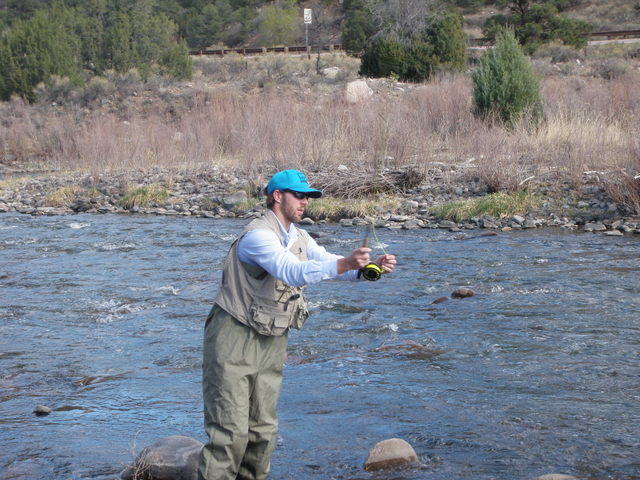 I looked at Adam while Dan look on and suggested, “Crossing at that spot and taking a plunge definitely qualifies you for bad ass status.” Dan vehemently agreed.

We threw all our gear in the car and executed a U-turn and drove another five miles upstream to Texas Creek, crossed the bridge and parked at the fisherman parking lot. The three of us proceeded to hike down the cactus laden trail beyond the barn and rustic horse corral to a point 100 yards downstream from the island that I was targeting. Another fisherman and a young boy were present in the nice pool below the island. Dan crossed the river and fairly quickly landed his fourth fish of the afternoon. I worked up along the right bank and experienced two long distance releases on fish that felt decent.

By now the sun was lower and the air had cooled a bit and intermittent clouds blocked the sun. The caddis swarms moving up and down the river along the bank were intensifying but very few caddis were actually touching down on the water. We made our way up the river to the nice pool below the point of the island, and the other fisherman had departed, so I worked the water thoroughly with no success whatsoever. Dan waded back across to our side and when we came to the right channel of the island I spooked a trout from a shallow lie along the right edge. Dan waded up along the left bank and shot a cast upstream, and I was surprised to see him land a fish in short order. Adam grabbed the right bank and I moved to the middle, but I could see this branch of he river was too narrow to support three anglers at once. I decided to cross the island and fish up along the left side. 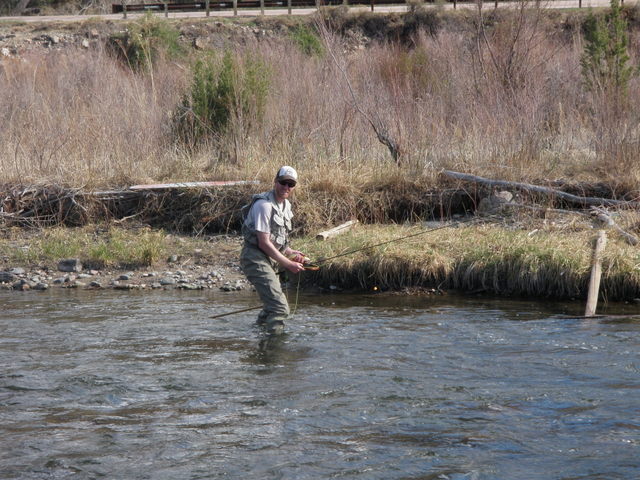 Another Nice Catch for Dan

When I got to the left top of the island to some nice pockets I waded out 25 feet so I could fish back to my right to the pockets as this cut down on the glare. For the next half hour I experienced the best fishing of the day as I landed two nice browns on my duke nymph and had two additional long distance releases. I continued above the island and met Dan and Adam who reported they hadn’t landed any additional fish after the one Dan caught while I was looking on. Adam and Dan were growing weary of fishing, so they moved up the bank to a deep run below some white water while I worked my way across the river to the bank. As I did this I spotted several sporadic rises, so I decided to make a last stand with caddis dry flies. I clipped off the wet flies and removed the split shot and strike indicator and tied on a size 14 dark olive body caddis. 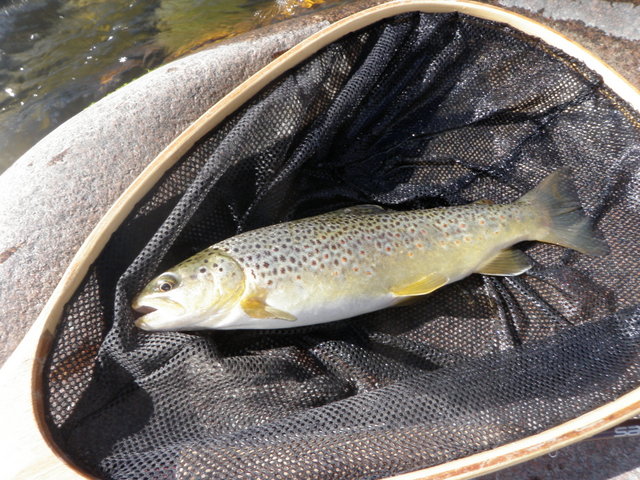 I couldn’t arouse any interest from the fish in the spots where I’d observed rises, but as I was prospecting and moving I noticed a rise a foot or two above a boulder next to the bank. I positioned myself so I could drop a cast to that spot, and on the third or fourth drift a  trout sucked in the fly. I set the hook and for a moment felt the throb of a fish, but just as quickly the fish was off and seeking cover. Dan landed five in the afternoon as did his father so Dad bought dinner and beers at the Phantom Canyon Brew Pub in Colorado Springs on the return trip.

On Sunday morning I checked out the fishing reports on the Arkansas River and it seems the hatch progressed as far as Cotopaxi. It is very difficult to pinpoint the location of the progression, but the shop in Salida indicated that there was minimal success in upper Bighorn Sheep Canyon, and Royal Gorge Anglers mentioned good fishing as far as Cotopaxi. I’m guessing that we were fishing below the leading edge emergence based on the lack of action on pupa and the thicker swarms of caddis on the willows and rocks along the river. The warm air temperatures and lack of cloud cover probably caused the egg laying adults to return to the water later in the day after we departed. The search for the epic caddis hatch continues in 2012.