Another spring-like day with a high temperature in the upper sixties along with a significant impending snowstorm motivated me to complete a fishing trip on Tuesday, March 9. I envisioned a larger river than the front range streams within close proximity to Denver, and I considered the Arkansas River and several sections of the South Platte River. After consulting with a fishing guide, fly shop reports, and DWR flow data I decided on the Arkansas River, and I departed from my home in Denver by 7:15AM. 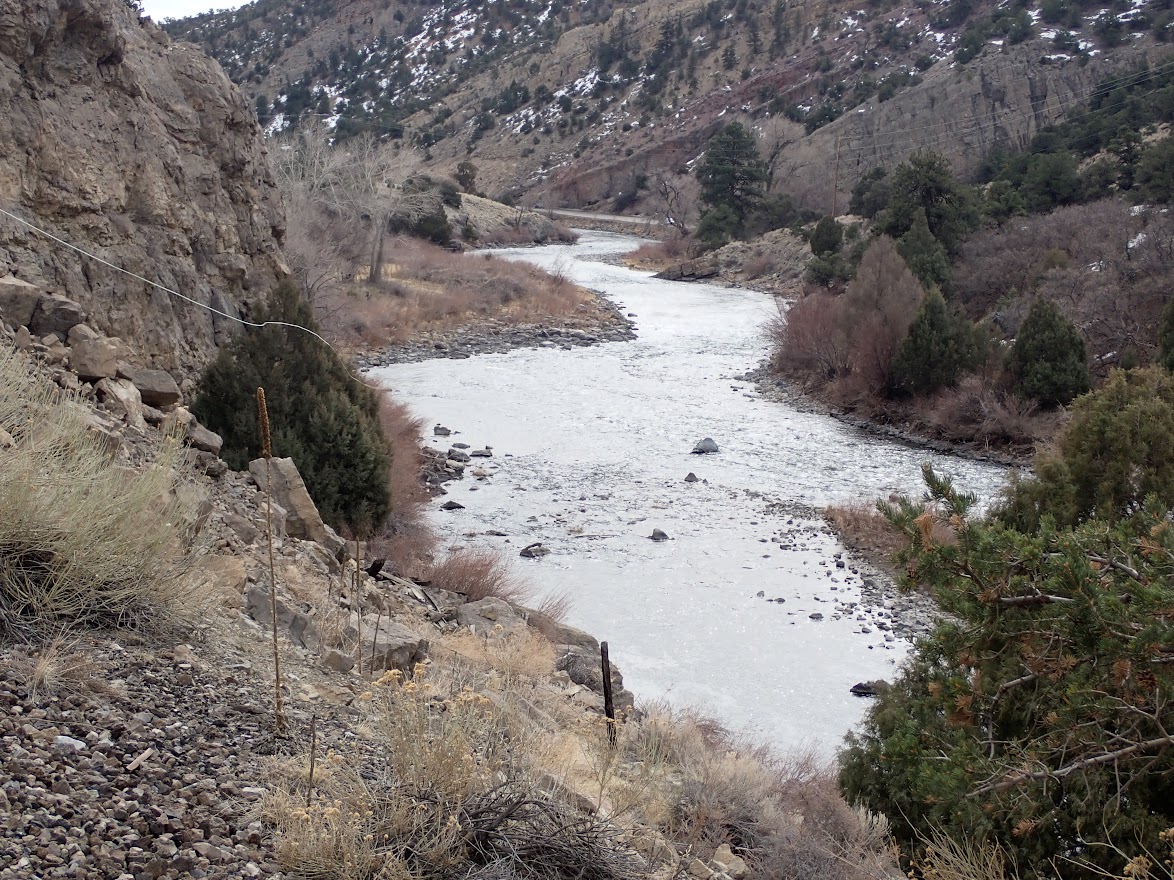 Fortunately the drive was uneventful, and I arrived at my usual parking space high above the river by 10:00AM. The river was low and clear, and the air temperature was 53 degrees, as I assembled my Sage One five weight and added several layers to my upper body. The wind gusted on a regular basis in excess of 10 MPH, and this condition explained my tendency to over dress for my day on the river. I crossed the river at my usual spot and marched along the north bank, until I reached an attractive deep run that became my starting spot. I knotted a size 12 20 incher to my line, and beneath it I added a crystal stone. I read that little black stoneflies were in abundance on the South Platte River, and I concluded that they might be a tasty morsel on the Arkansas River as well. Guide Pat Dorsey’s recommended imitation for the little black stonefly was a black pheasant tail, but I did not have a dyed black pheasant tail feather in my possession, so I improvised. My size 18 black stonefly pattern contains a black crystal flash tail, wing case, and legs. The preponderance of crystal flash suggested a name that contained crystal, and, thus, the crystal stone was born. 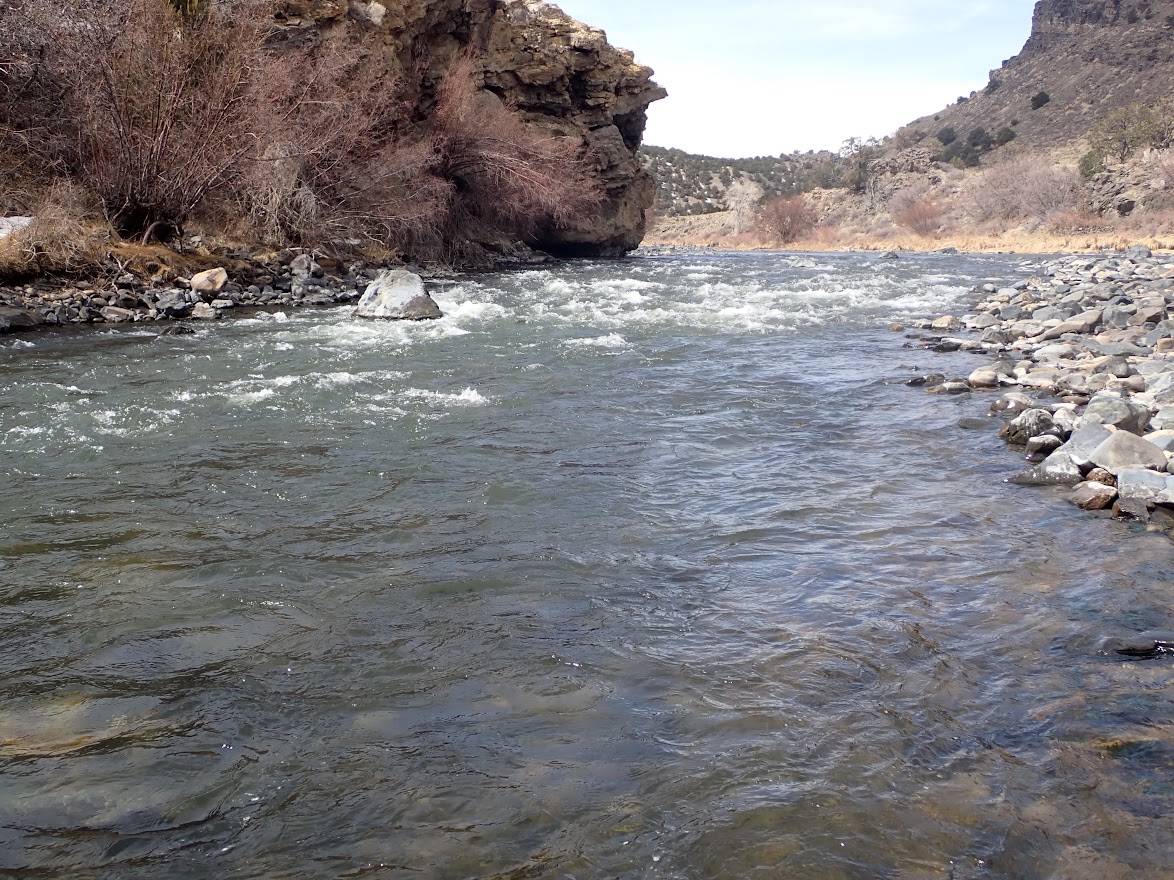 Deep Run Did Not Produce

I thoroughly fished the double nymph combination with a thingamabobber indicator from bottom to top in the starting run, with no evidence of hungry trout. After this disappointment I continued upstream to the narrow island and then up the southern side of the island, and again my efforts to connect with a local trout were thwarted. When I returned to the downstream tip of the island, my watch displayed 11:30AM, so I found a nice flat rock and consumed my lunch. I was now positioned along the north side of the narrow island at the downstream end of the right channel. I concluded that the double weighted nymph combination would disturb the low flows excessively, so I paused to reconfigure with a peacock hippie stomper, sunken ant, and iron sally. The three fly arrangement looked great to this avid angler, but once again I found no evidence of resident fish; not even a darting spooked fish. 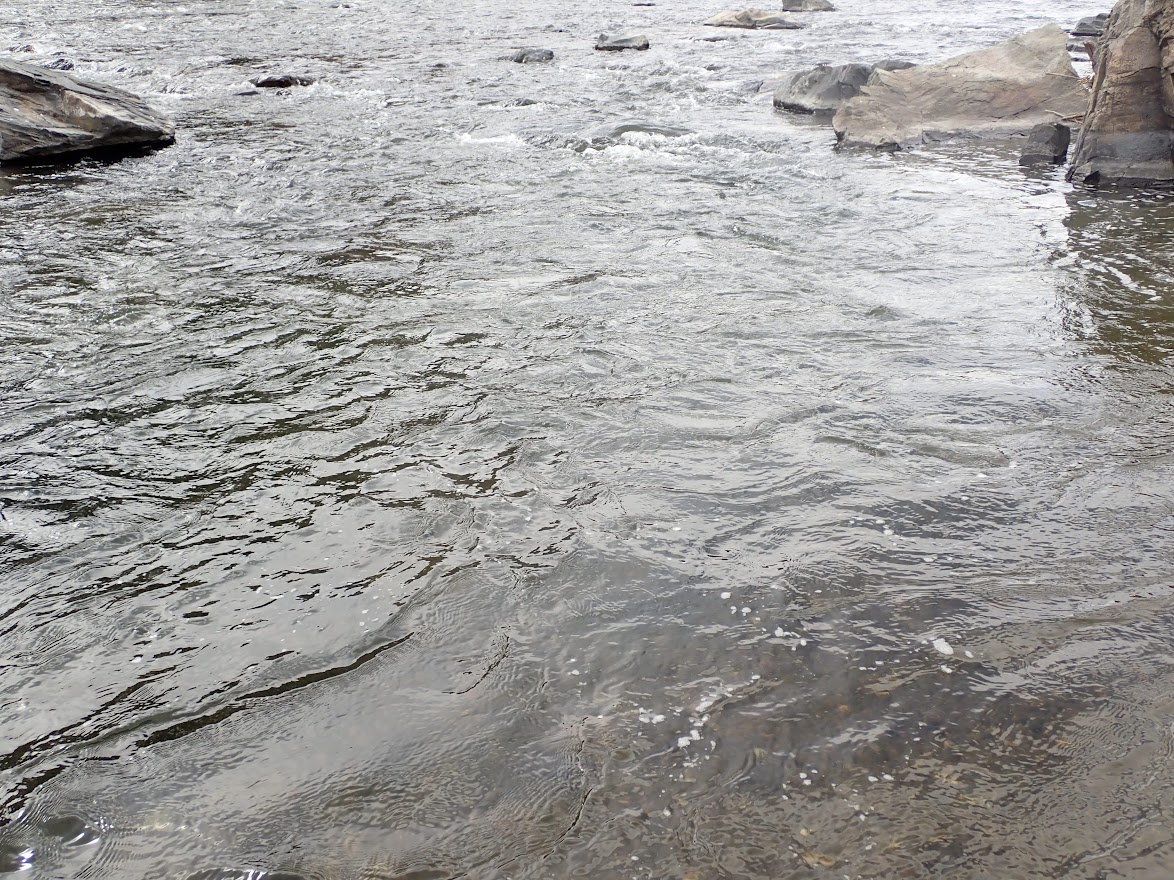 First Trout Came From This Bank Side Run

When I reached the top of the island and right channel, I found a spot to sit down and reverted to the indicator nymphing arrangement; however, this time I used a chartreuse yarn New Zealand strike indicator along with the 20 incher and a coffee/black Pat’s rubber legs. I hiked quite a ways to skip around a wide shallow section, and eventually began to probe the deeper runs on the north side of the river. I reached a nice deep run and trough along the right bank by 1:00PM, and my fish count was mired on zero, so I decided to make another change. I replaced the coffee/black Pat’s rubber legs with a yellow/brown Pat’s rubber legs with orange legs. This fly was a size 12 with a bead, and it was also weighted. 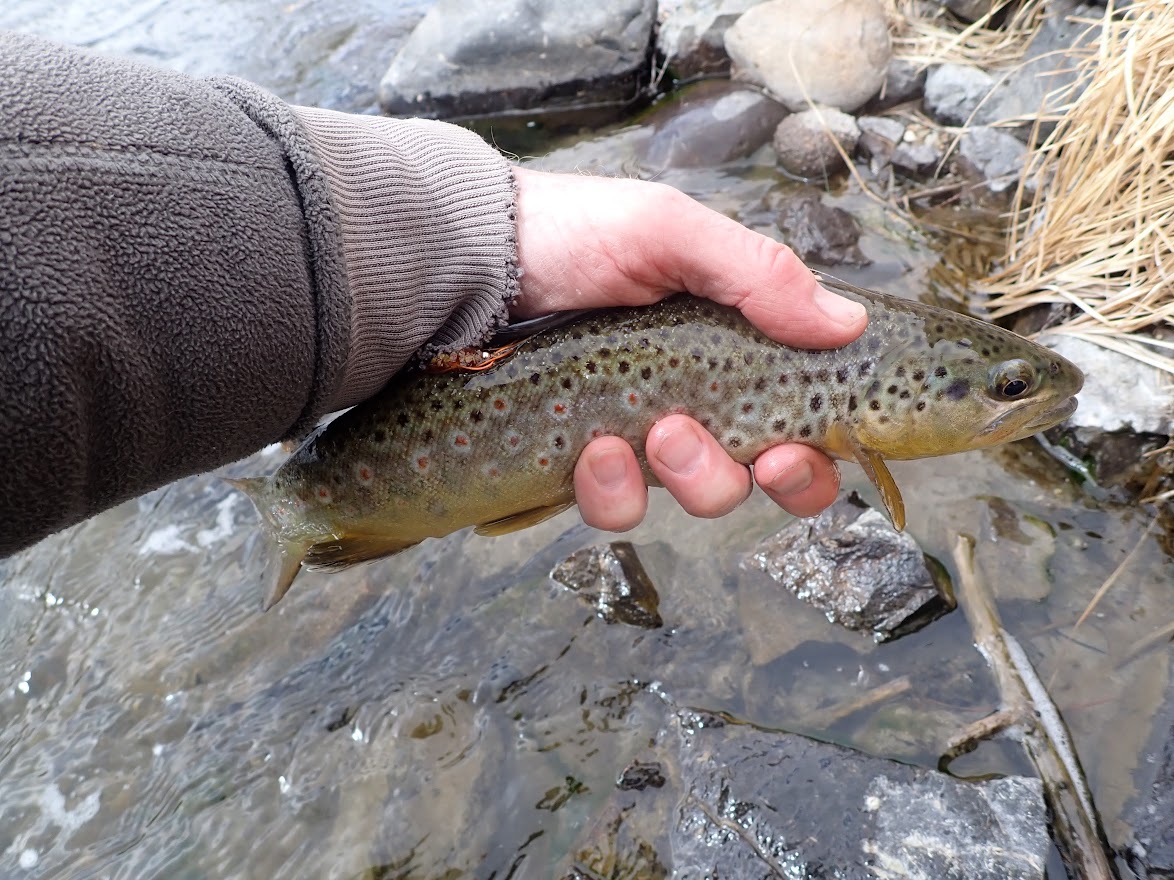 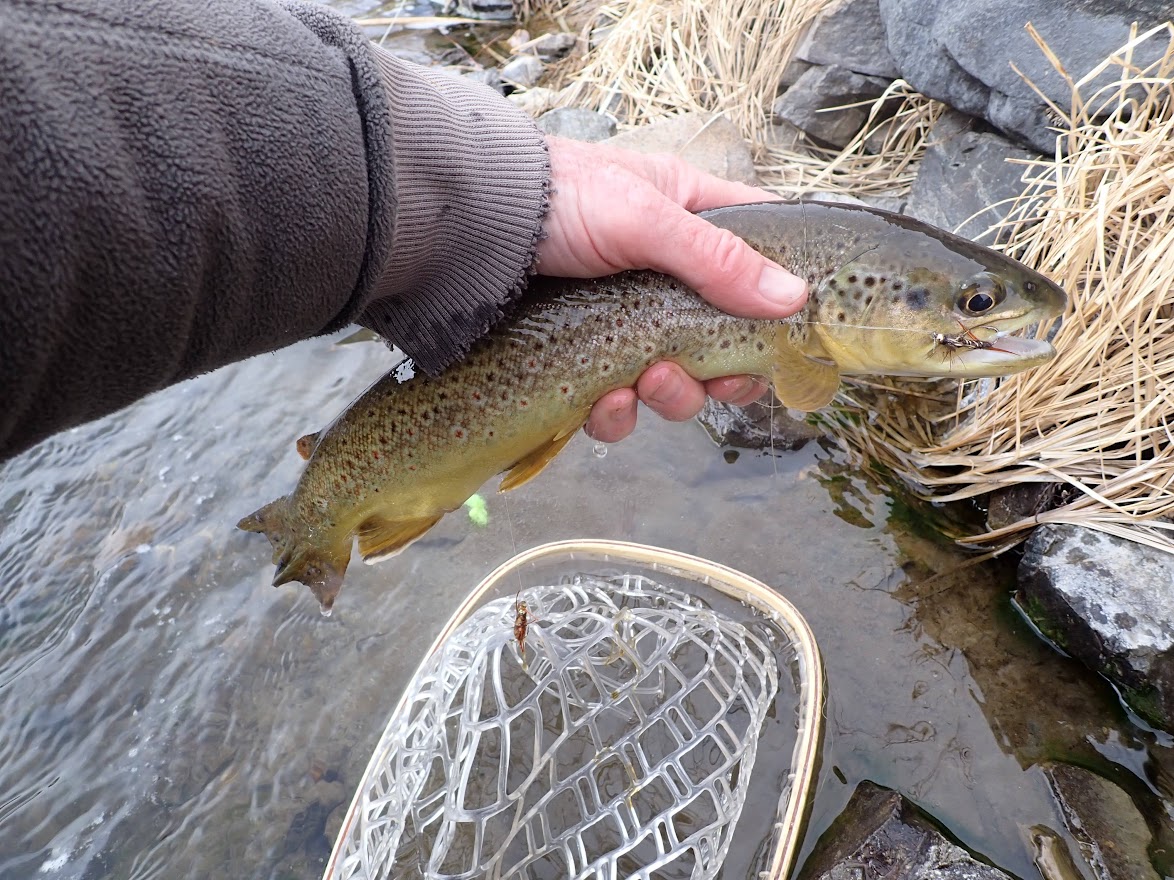 Almost instantly I found success, when two very nice brown trout snatched the 20 incher, as the flies drifted along the deep run by the bank. After two hours of fruitless casting, I was elated to finally tally some fish and prevent an increasingly likely skunking. The sun broke through, and the air warmed up, and I was overheated in my light down coat and fleece hoodie, so when I reached my original crossing point, I moved to the south bank and climbed to my car, where I removed the down coat layer. I retrieved my phone and checked in with Jane and then advanced to the high vertical wall next to the river. Here I observed for a few minutes in an attempt to spot a fish, but the effort did not yield any targets. I made several upstream casts tight to the wall and drifted through a foam line, but this ploy proved futile. 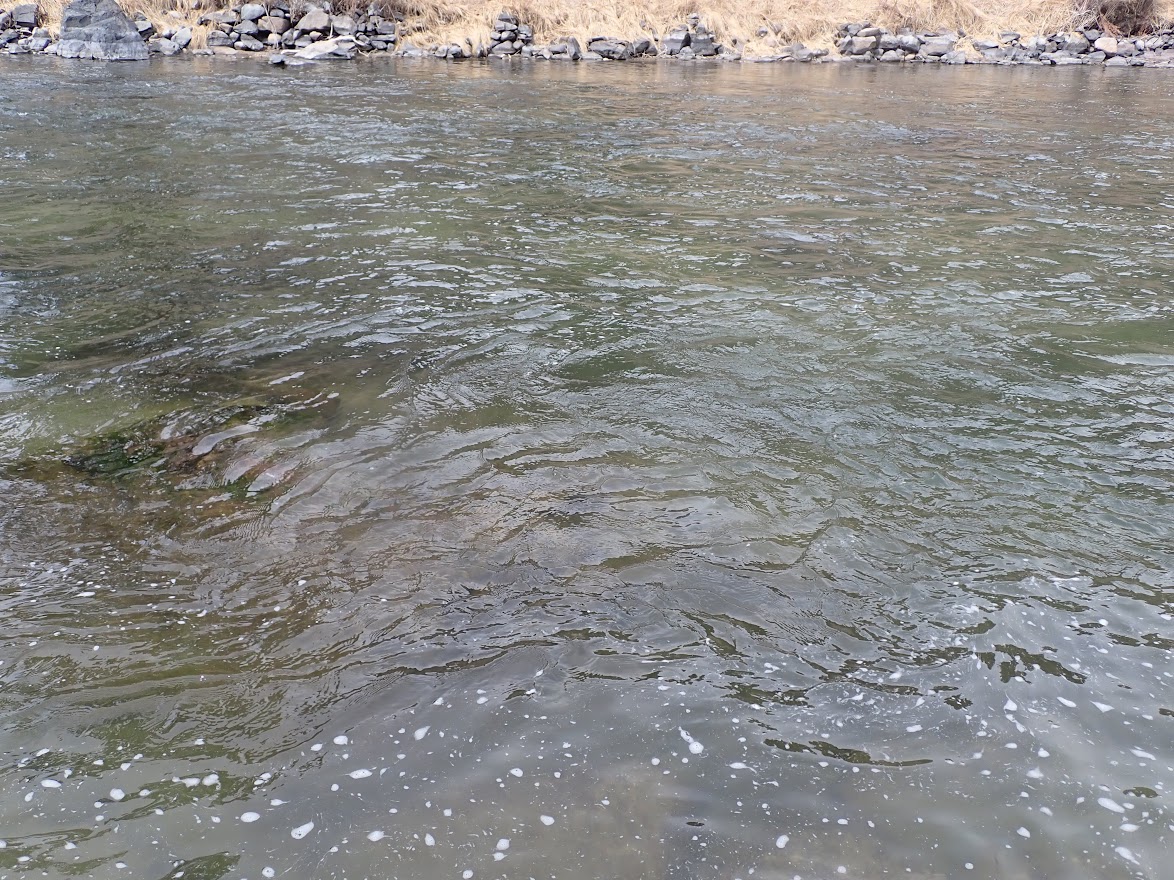 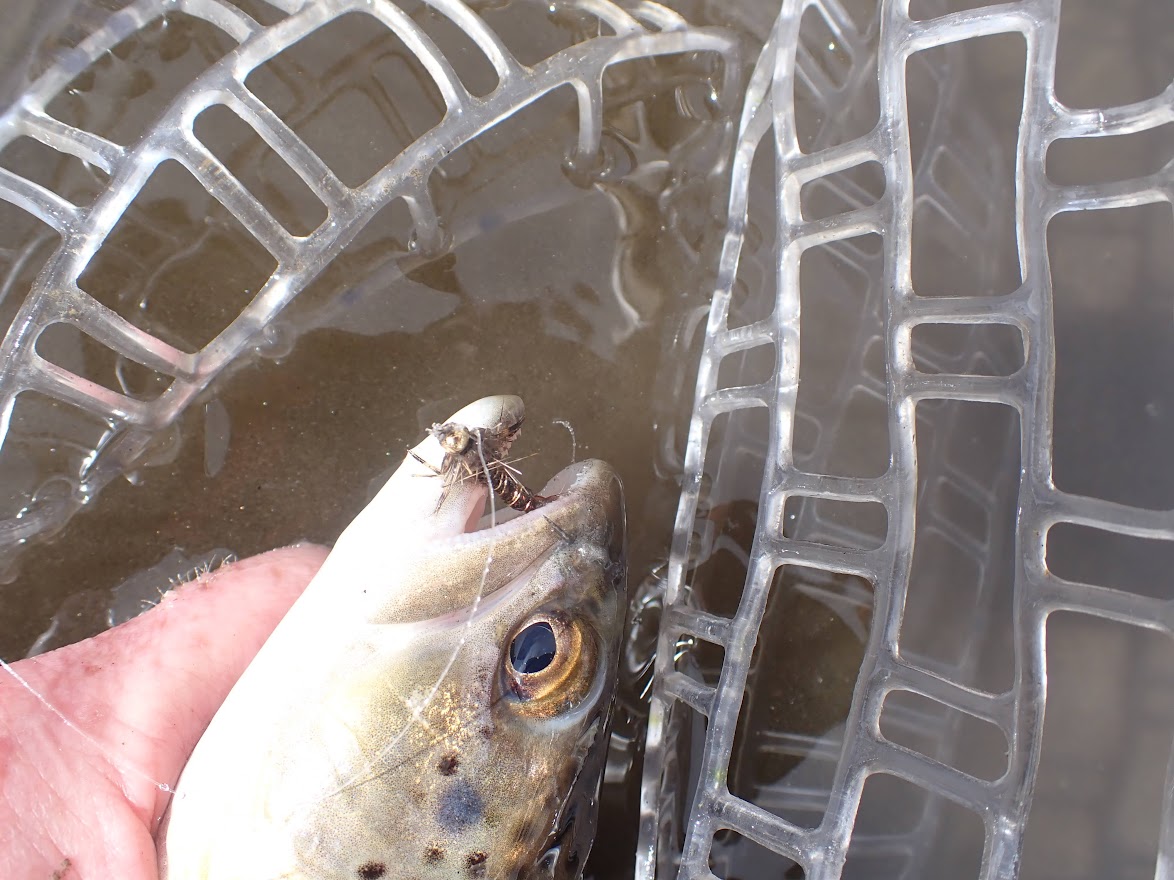 I departed from the deep slow moving portion of the massive pool and moved to the area just above, where a nice deep riffle fed the depths. The current was moderate, the depth was three to four feet, and the river bottom contained numerous large submerged boulders. I was convinced that this was brown trout territory, and after some patient casting I was proven correct, when I landed two more respectable brown trout in the thirteen to fourteen inch range. The first trout gobbled the 20 incher, but I was surprised to discover the yellow/brown rubberleg in the mouth of the second netted fish. 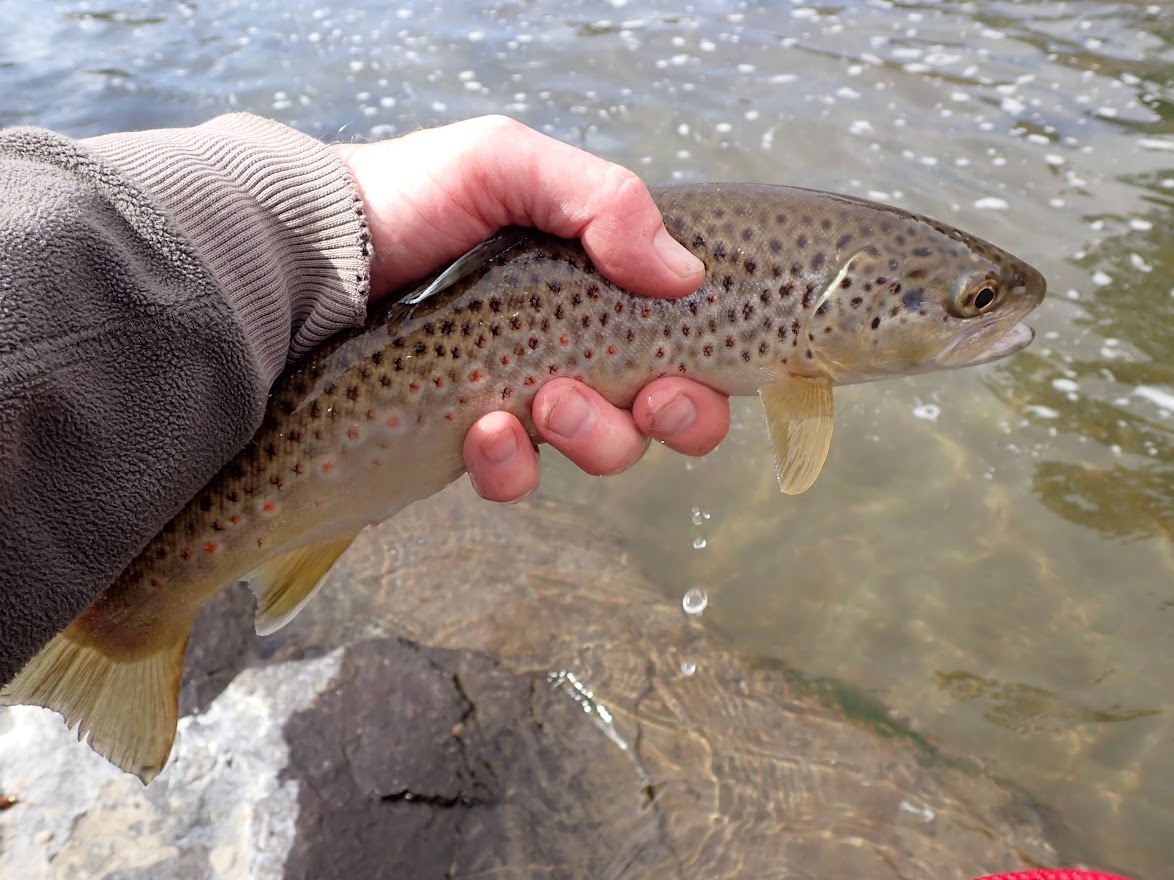 Number Four Was a Beauty

For the next 1.5 hours I progressed along the south bank and systematically nymphed all the likely spots with the double stonefly presentation. At a spot fifty yards above the vertical wall and large pool, I scooped two more brown trout in the twelve to fourteen inch range into my net. Both savored the yellow/brown stonefly imitation, and my confidence in the fly zoomed. I tied these quite a while ago to imitate vulnerable stoneflies, after they molt. Initially I chose the fly to add weight and keep the 20 incher along the bottom of the cold flows of the Arkansas River. Who knew that the molting event truly attracted Arkansas River trout? 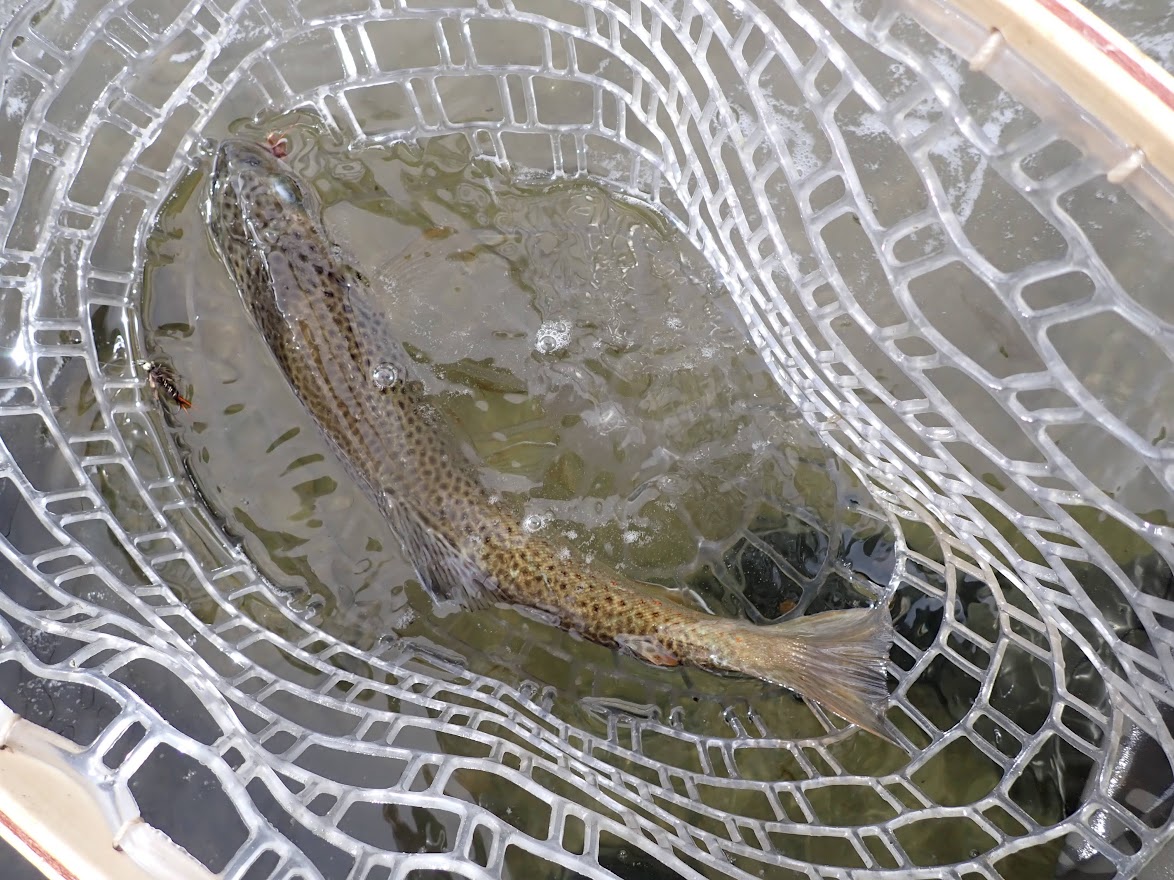 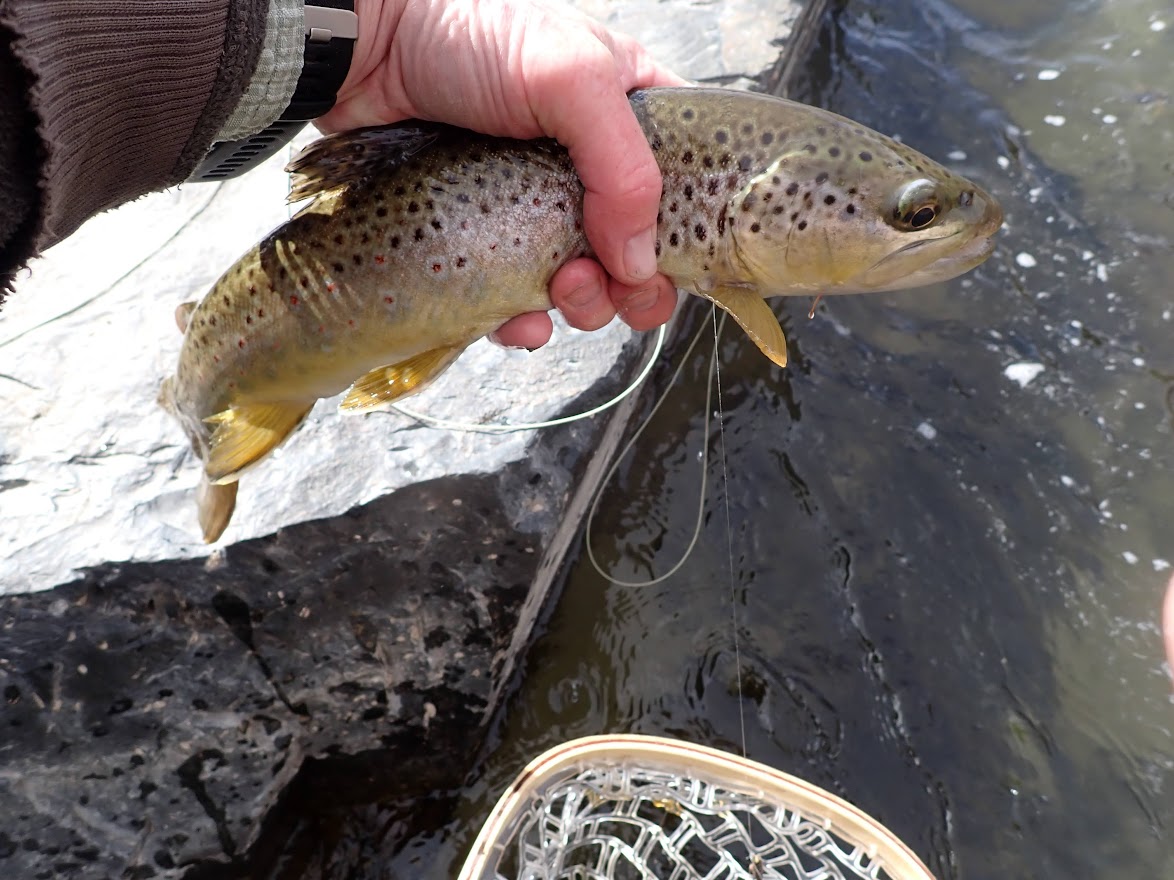 The wind was a constant nuisance, but Tuesday was a fine day for fly fishing in the Rocky Mountains. After getting skunked for two hours, I landed six twelve to fourteen inch brown trout on the double stonefly combination. These six fish came to my net in the final two hours. At 3:00PM I snagged bottom in a spot, where it was too deep to risk my life to retrieve the flies, so I broke them off and declared it a day. I will not complain about six nice fish early in the season, and I will now have to wait out the return of winter before venturing out to another trout stream in March.