Jane was interested in a camping trip to Steamboat Lake State Park during the week of June 22, 2020. Given my success on the Yampa River on June 16 and June 17, I was not averse to visiting the north central area of Colorado again; however, when I checked the flows, I noted a precipitous drop from 1,000 to 450 CFS. Fortunately I recalled decent success at the lower level, and I was anxious to determine whether the embryonic pale morning dun hatch witnessed on June 17 had evolved into a more significant fish attracting event.

My next step was to reserve a campsite at Steamboat Lake State Park on relatively short notice. Steamboat Lake is the crown jewel of the Colorado state park system and very popular with residents and out-of-staters as well. I began fumbling through the availability dates, and I was shocked to discover that site 167 of the Bridge island loop was available on Thursday and Friday night, June 25 and 26. Finding a space on a Friday night in the most desirable loop was a huge windfall, and we wasted no time in snatching it.

Jane and I stopped to complete a five mile hike at Mad Creek on Thursday, as we drove north to Steamboat Lake, so Friday was my designated fly fishing day. As we ate breakfast on Friday morning, Jane discovered that her iPhone battery was depleted to 7%, so she plugged it into the USB port in the Santa Fe to charge. In our minds we were certain that the huge car battery could withstand twenty minutes of energy drain from a puny iPhone battery. Well, our minds were clearly confused, because the only sound that issued from the car, when I hit the start button was the click of a drained battery. I was an angler anxious to fish with no means of transportation. As we pondered our predicament, Jane caught the attention of the young man who was camping across from us with his wife and young daughter, and miraculously he possessed jumper cables. He swung his Jeep around facing the Santa Fe, and in a matter of minutes the Santa Fe engine was rumbling and charging. I thanked him profusely, and while in Steamboat Springs I stopped at the West End liquor store and purchased a craft beer six pack, which I promptly bestowed upon our camping neighbor when I returned.

Once I was on the road, I made the forty minute drive to Steamboat Springs and arrived at my usual parking space at the base of Howelsen Hill. The rest rooms remained locked, so I added that to my planning for a day on the river. Friday was a warm sunny day with a high temperature around eighty degrees. Flows held around the 400 CFS mark, and this made wading along the edges much more manageable than the previous week, however, limited numbers of fish holding lies existed in the main river channel. High But Lower Flows on the Yampa

I began above the hot springs, and in the first deep pocket next to the bank I landed a fourteen inch brown trout on the second cast. I began my quest for Yampa River trout with a tan ice dub chubby Chernobyl, iron sally, and salvation nymph. Fish number one gulped the iron sally, as did the next three, and I was off to a fast start. For the remainder of the morning I worked upstream toward the Howelsen Bridge, and I landed thirteen trout. Three were a bit diminutive, but the other ten were respectable fish of twelve inches or greater, and my net felt the weight of a fifteen inch rainbow and several fourteen inch bows. 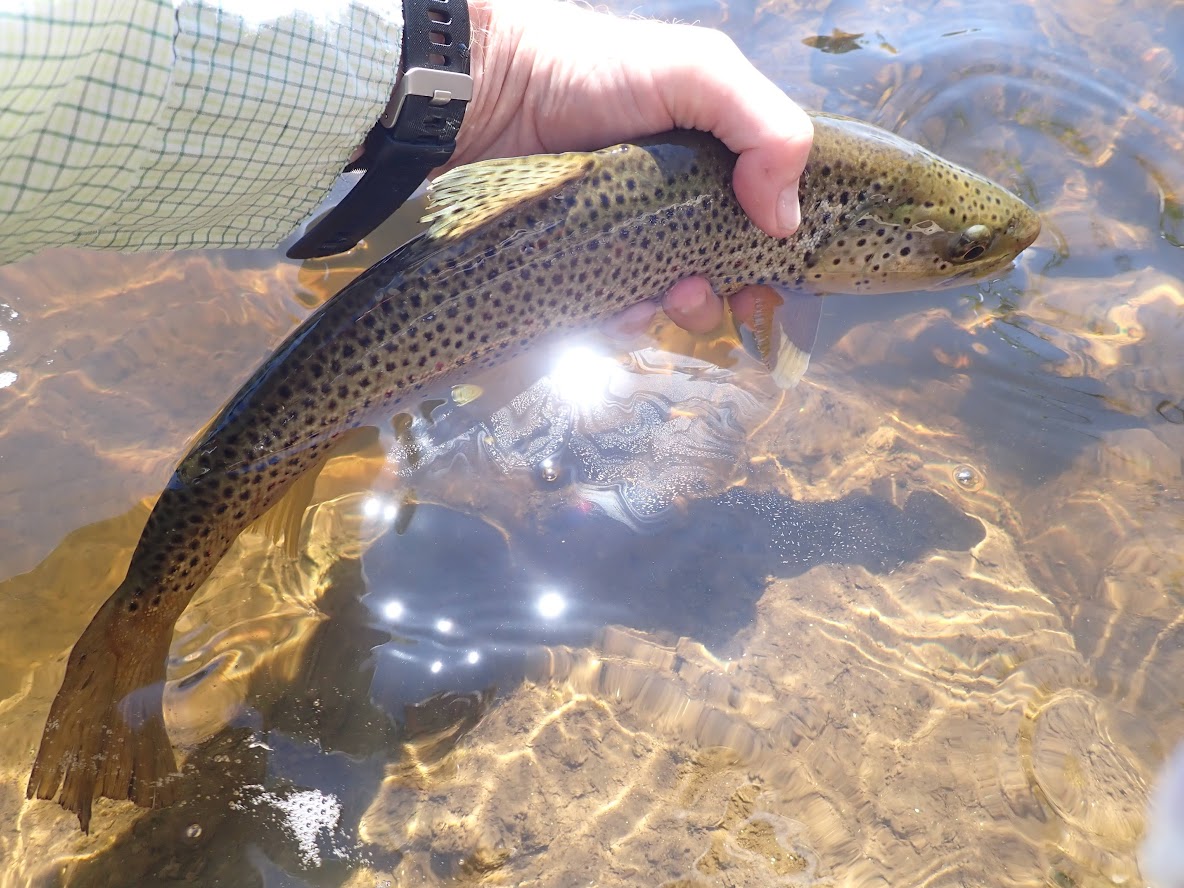 By 11:30AM pale morning duns made an appearance, and their presence coincided with a hot streak for the salvation nymph, until I lost it in the process of fighting and releasing one of the fine rainbows. I noted that the majority of the pale morning duns were size 18, so I replaced the salvation nymph with a size 18 beadhead pheasant tail. Toward the tail of a run I spotted a fish, as it flashed in the vicinity of my trailing nymphs, so I whipped the rod sideways and connected with a gorgeous brown trout. I fought the wide body for a minute, before it turned broadside to the current and broke off the iron sally and pheasant tail. Disappointment reigned. Next I tested a fusion nymph and super nova, and the nova accounted for a small brook trout to boost the fish count to thirteen. Recall that one of the inducements of returning to the Yampa was the prospect of a more dense and longer lasting pale morning dun hatch, and that condition did in fact occur. 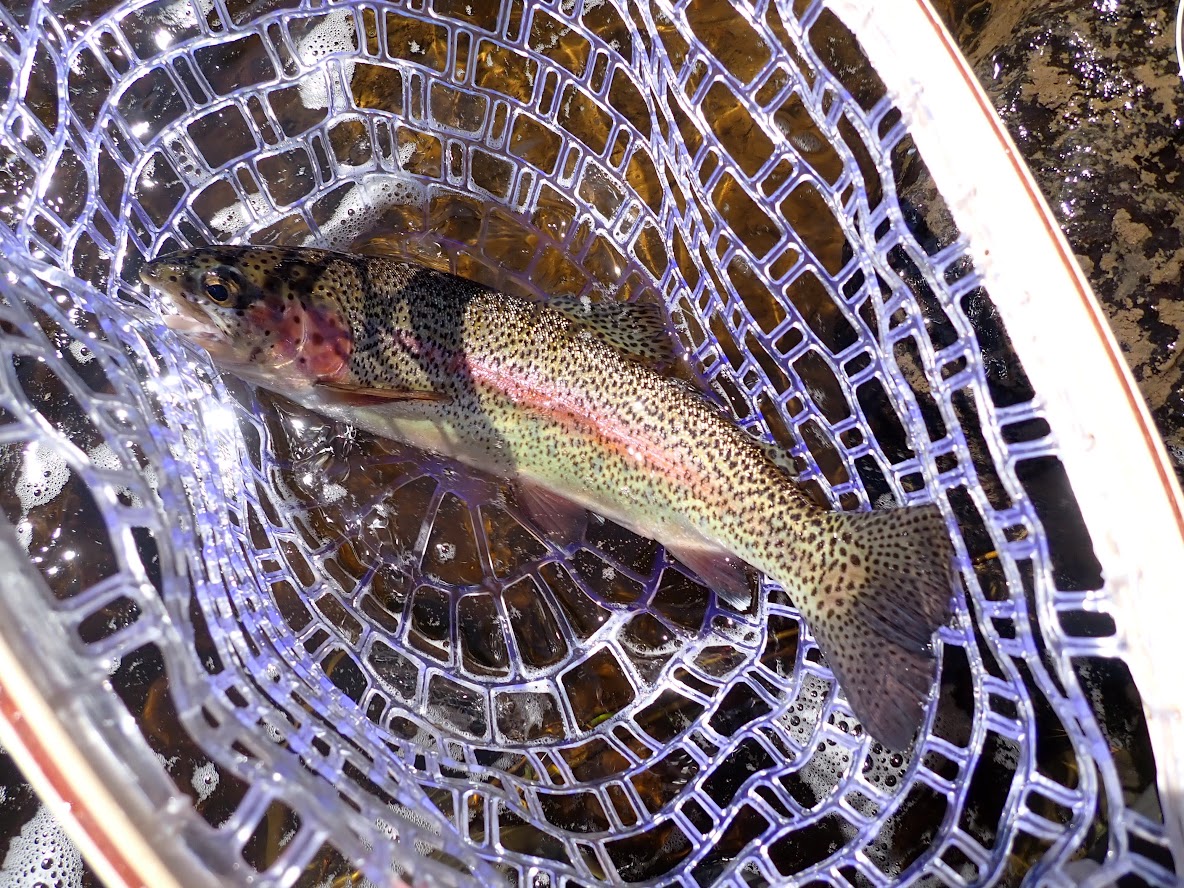 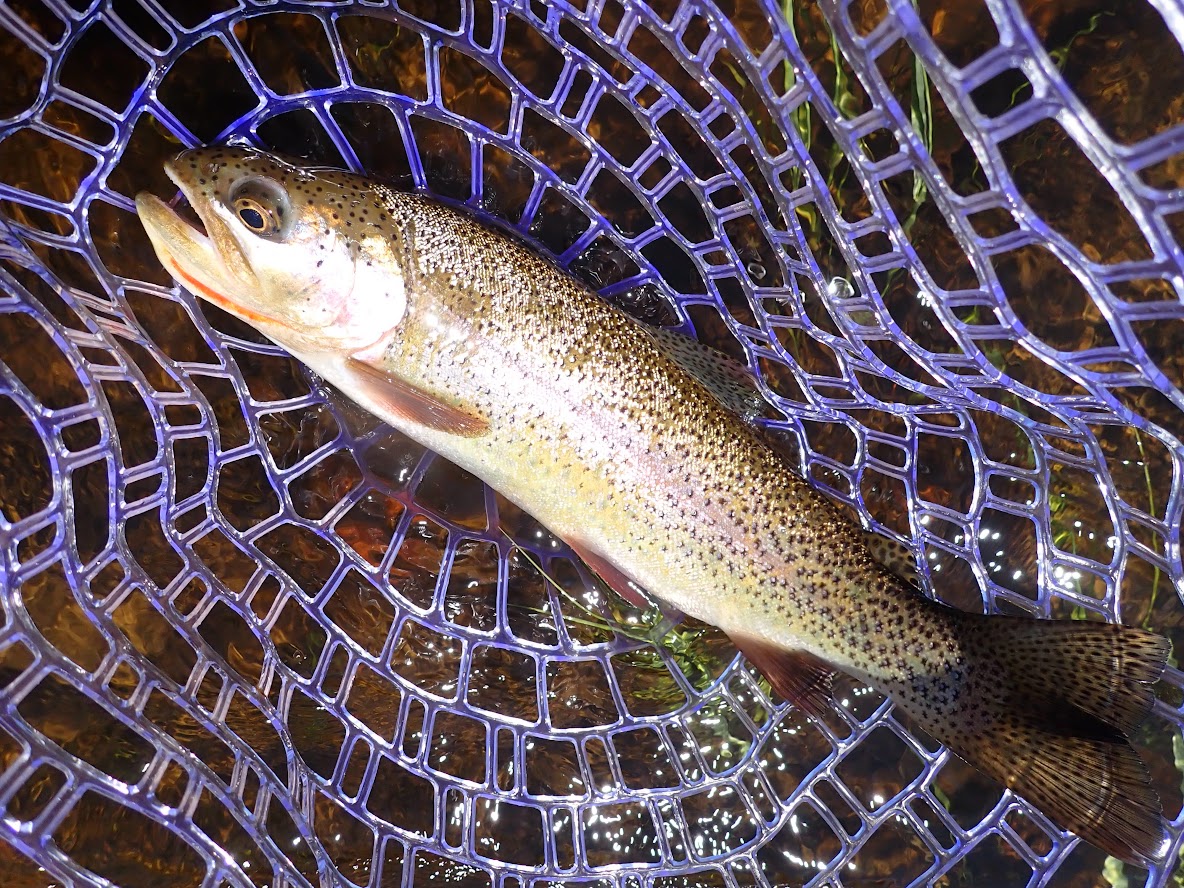 By now I was approaching the Howelsen Bridge and another angler occupied the large pool and eddy on the south side of the river. I remained fifty yards below him, and I observed a pair of rises in a narrow band of moderate depth riffles near the bank. In spite of a fairly dense hatch these were the first glimpses of surface feeding on the day. I decided to convert to a single dry fly and attached a size sixteen cinnamon comparadun to my line. On the very first cast to the spot where the lower fish rose a sip appeared, and I reacted with a swift hook set. A fourteen inch brown trout was not happy, and it went into the typical escape antics. I held tight and guided a beautiful chunk of butter into my net. 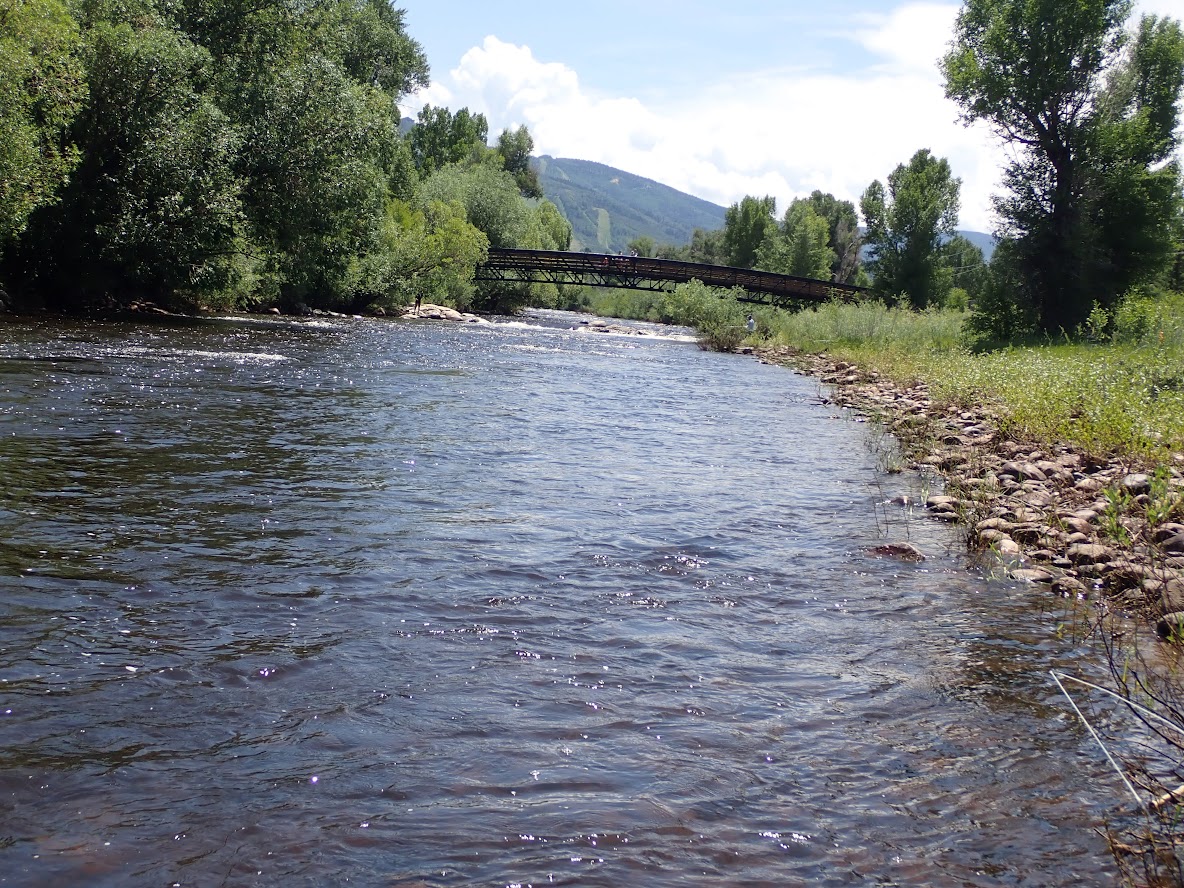 A Fisherman Claimed One of My Productive Spots 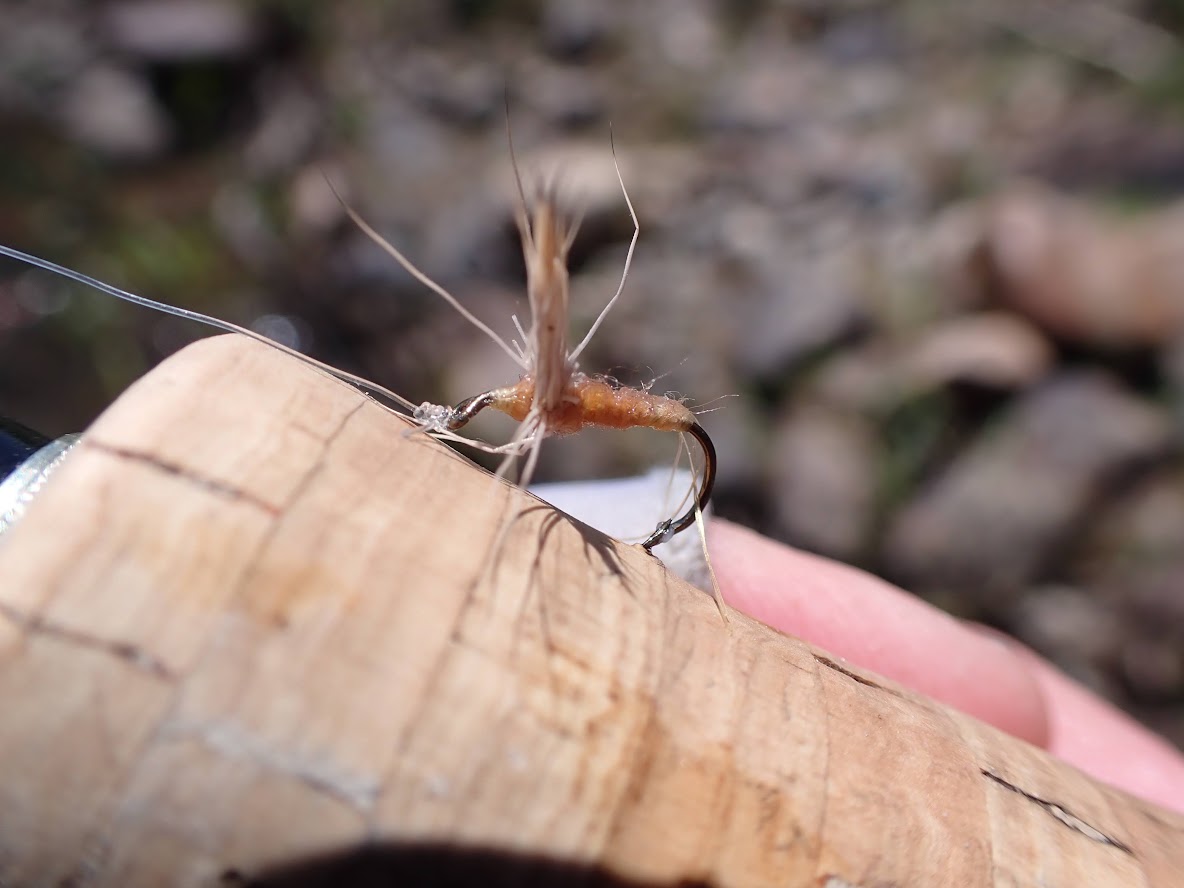 Cinnamon Comparadun Did the Trick 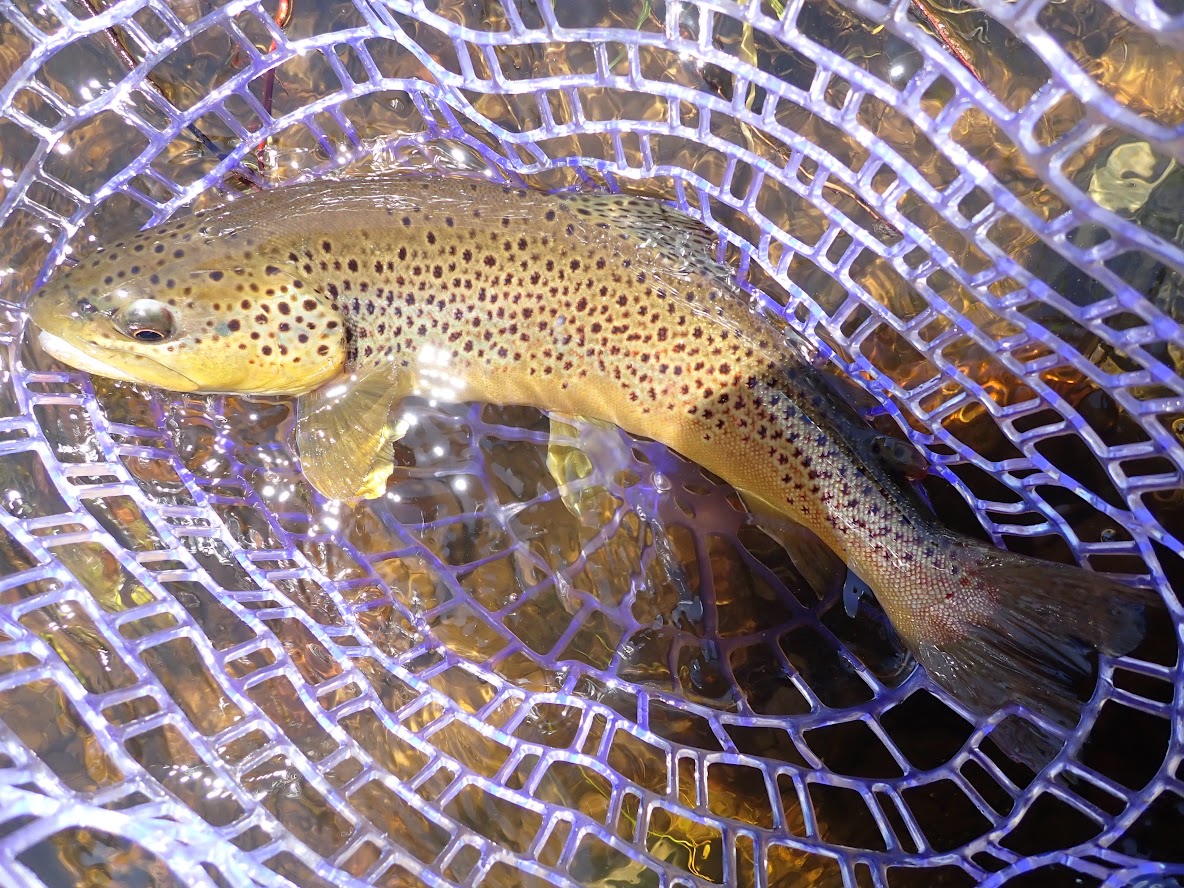 I stayed with the comparadun for a bit, but the rises ceased, and I reverted to the dry/dropper set up. The hatch mostly fizzled by 1PM except for some stragglers. I circled around the upstream angler below the bridge and continued to my favorite spot across from Taco Cabo, but again I was thwarted by the presence of another fisherman. I bashed back out to the railroad tracks and checked out the attractive pool above Fifth Street, but anglers claimed both banks. The sun was bright, the air temperature was eighty degrees, and the fish were ignoring my nymphs. Posses of tubers blew up three of my favorite haunts, so I decided to call it a day at 2PM.

Friday was a very successful day on the Yampa River. Yes, I ended early compared to normal. The end of the hatch, proliferation of tubers, and sudden explosion of other fishermen raised my level of frustration; but fourteen fish including some quality fighters made June 26 on the Yampa a solid outing in 2020.