I underwent mitral heart valve repair surgery a bit more than eight weeks ago, and on Tuesday, June 16 I was in the midst of my first solo overnight camping and fly fishing expedition. I was admittedly a bit nervous about this significant early step in my recovery. The camping was not a major concern, but wading the Yampa River with flows remaining at 1,000 CFS instilled a bit of anxiety in my persona. I intended to restrict my wading to the edge, but even this precaution entailed strenuous bashing through thick brush to access the prime high water holding spots in the rushing river. And what about my shoulder? I fished for three hours on two occasions after my operation, but I hoped to extend casting duration to five or even six hours. I did not drive three hours and set up camp for only a few hours of fishing each day. This thought passed through my mind, but I conceded that I could always quit early and rest, if my body cried for relief.

Readers of this blog know that one of my favorite periods of fishing in Colorado occurs as the freestone rivers descend. The rivers are high and clear, and the fish seek refuge along the bank behind large current breaks. Combine large concentrations of fish with some dense hatches, and you have a recipe for outstanding fly fishing. I experienced fantastic days during the run off time frame on the Yampa, Eagle and Arkansas Rivers during previous seasons, and I was averse to missing the highly anticipated event in 2020. A bit of heart surgery was not going to stand in my way, but of course seeds of doubt occupied my thoughts. In order to reserve a campsite at Stagecoach I gambled on June 11 that the flows would decline to challenging but manageable levels by Tuesday, June 16. At the time of making the reservation, the river was gliding through the town at Steamboat Springs at 1500 CFS. Fortunately my analysis of the trend line was fairly accurate, and flows on Tuesday remained in the 1,000 to 1,100 range. When I checked the chart at the end of the day, I learned that the river volume actually dipped into the nine hundreds. 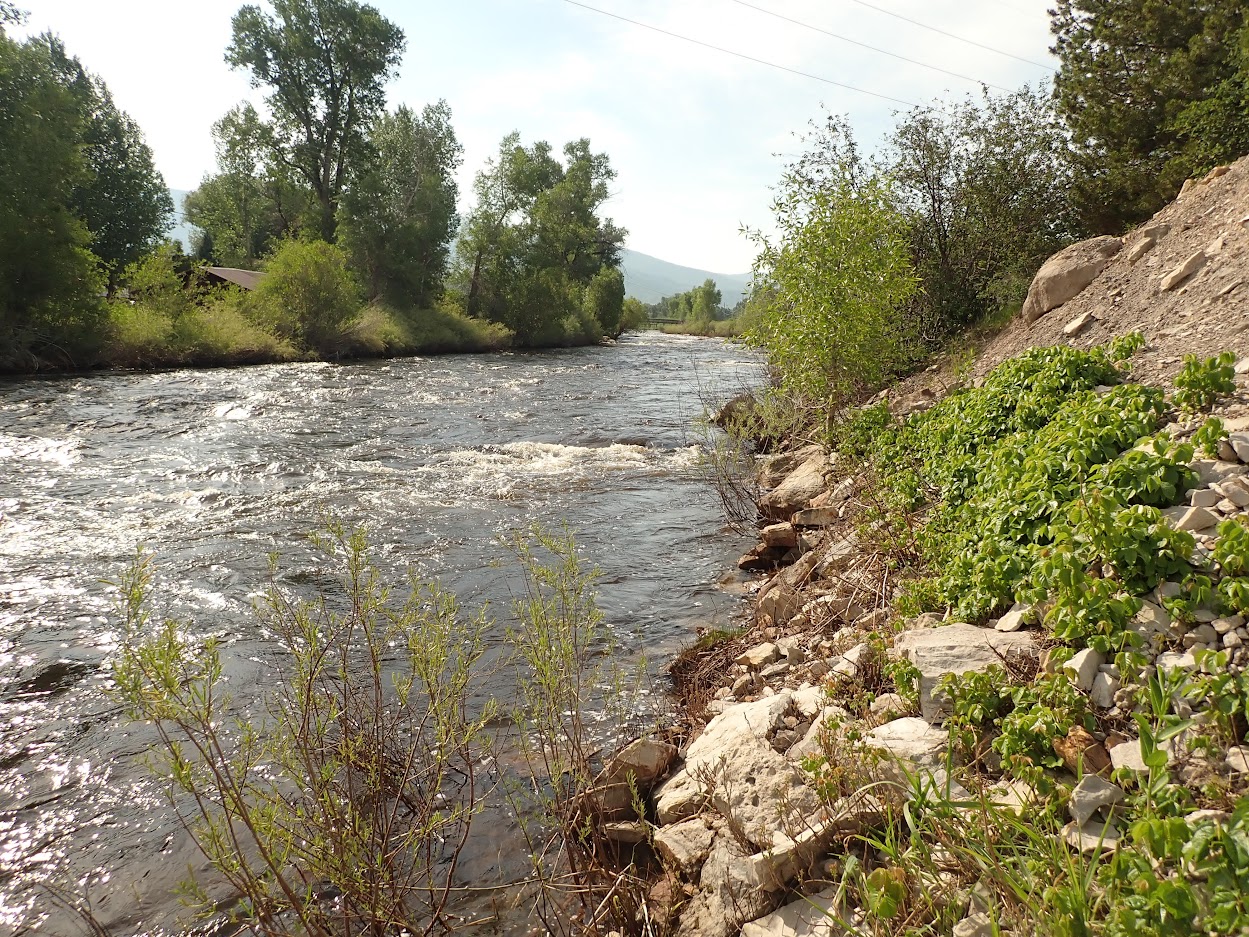 I arrived at the Howelsen Hill parking area at 8:30, and parked in front of the gazebo as is my custom when fishing the Yampa in town. Large groups of boys and girls wandered about, as they waited for organized group mountain bike rides. I was disappointed to learn that the men’s room was locked as a result of the covid lockdown. I will never again take for granted the availability of public restrooms. Tuesday developed into a beautiful day with a high of eighty degrees, although wind was a nuisance from time to time. 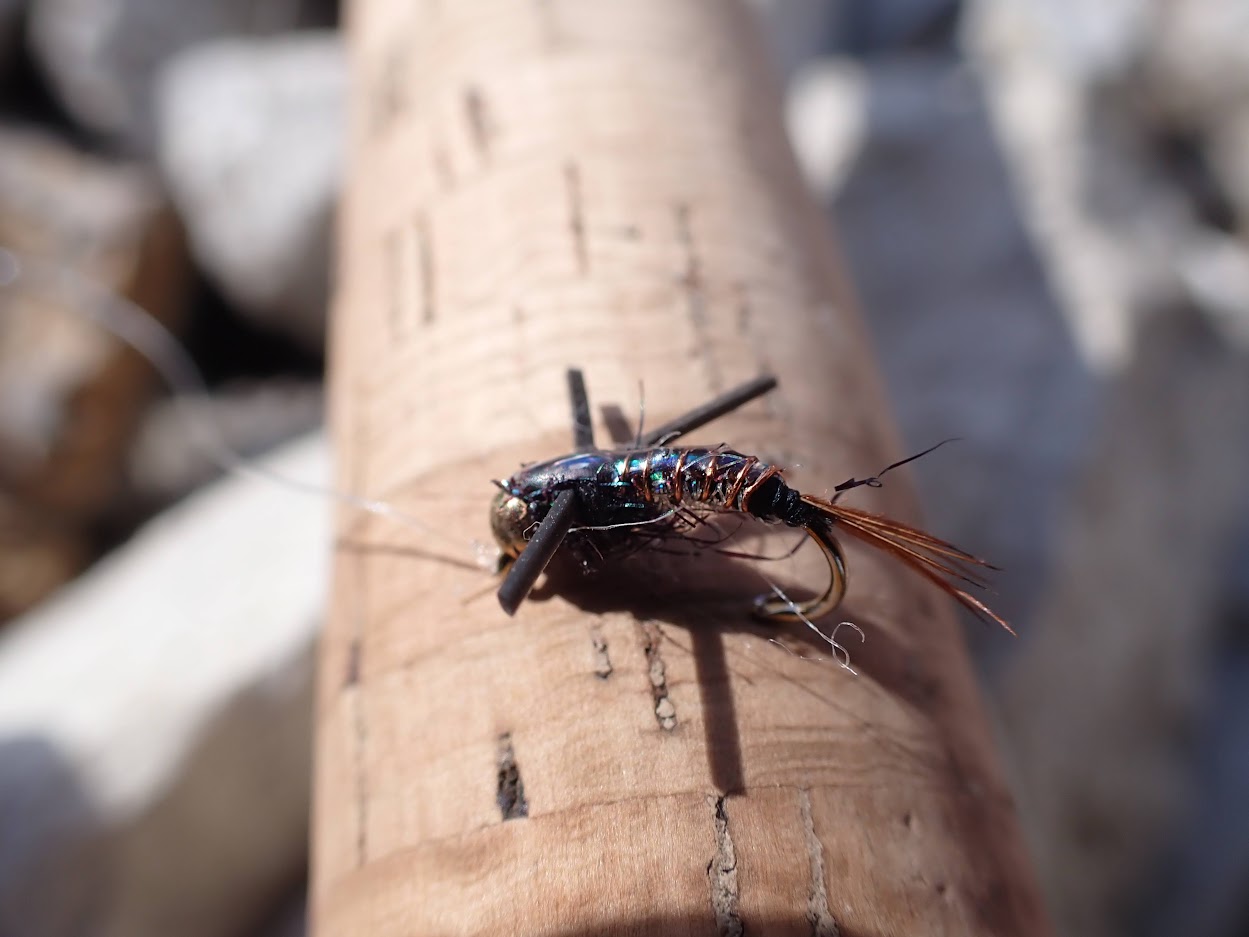 Salvation on the Line 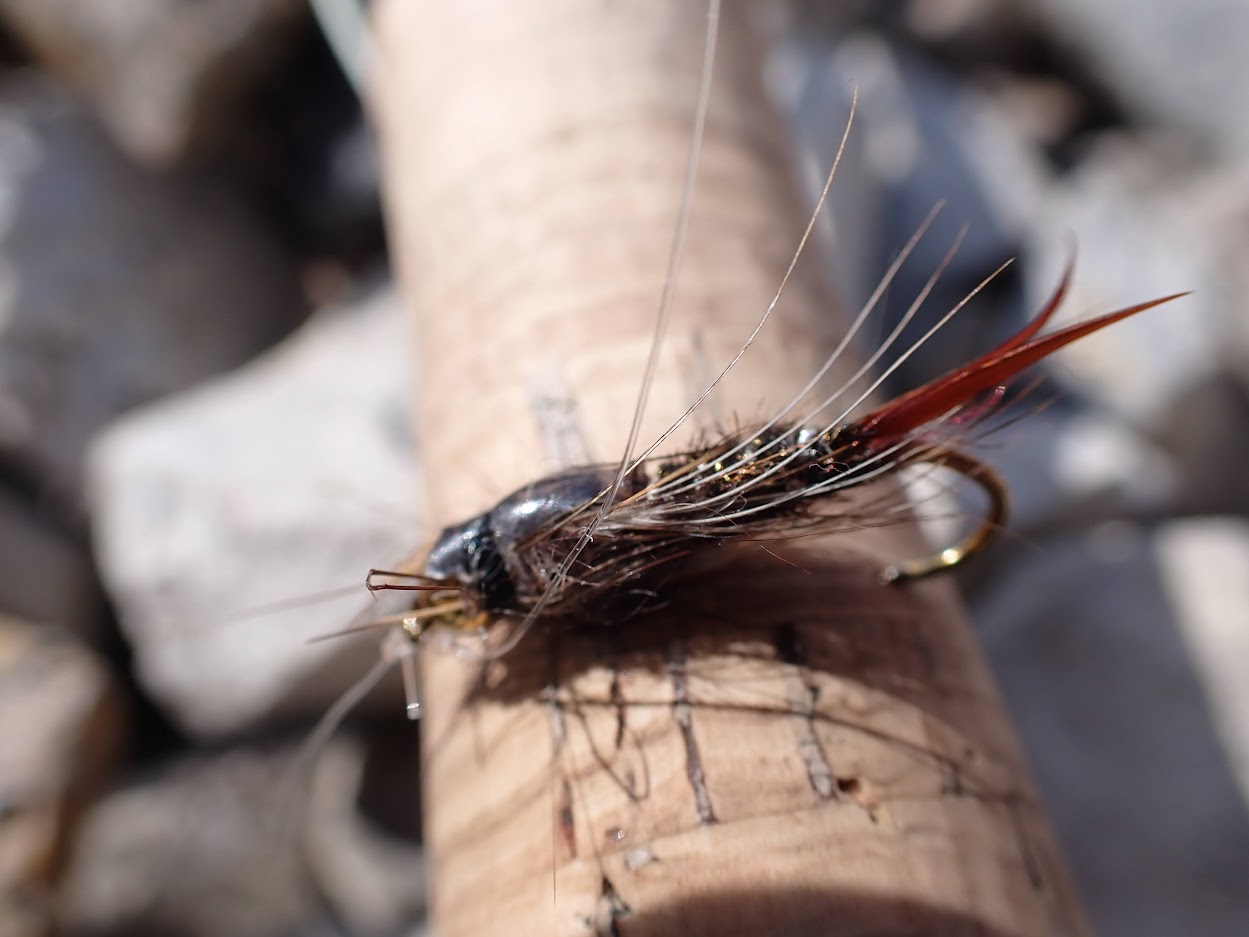 20 Incher Was a Top Producer

The high flows created tough wading conditions, so I was selective regarding my casting locations. During the morning I lost five flies including one 20 incher, two salvation nymphs, one iron sally, and one chubby chernobyl with a tan ice dub body. Three of the flies were the victim of a guide wire that spans the river, and the break off occurred in the tapered leader, thus forcing me install a new 7.5 foot leader that tapered to 5X. I was not pleased with this turn of events, but my own lack of focus was to blame. The catch rate was fairly steady throughout the day except for a one hour lull prior to lunch. The top producing flies on the day were a 20 incher, salvation nymph, and a light olive juju emerger. I also experimented with an emerald caddis pupa and sparkle wing RS2, but both were unproductive. 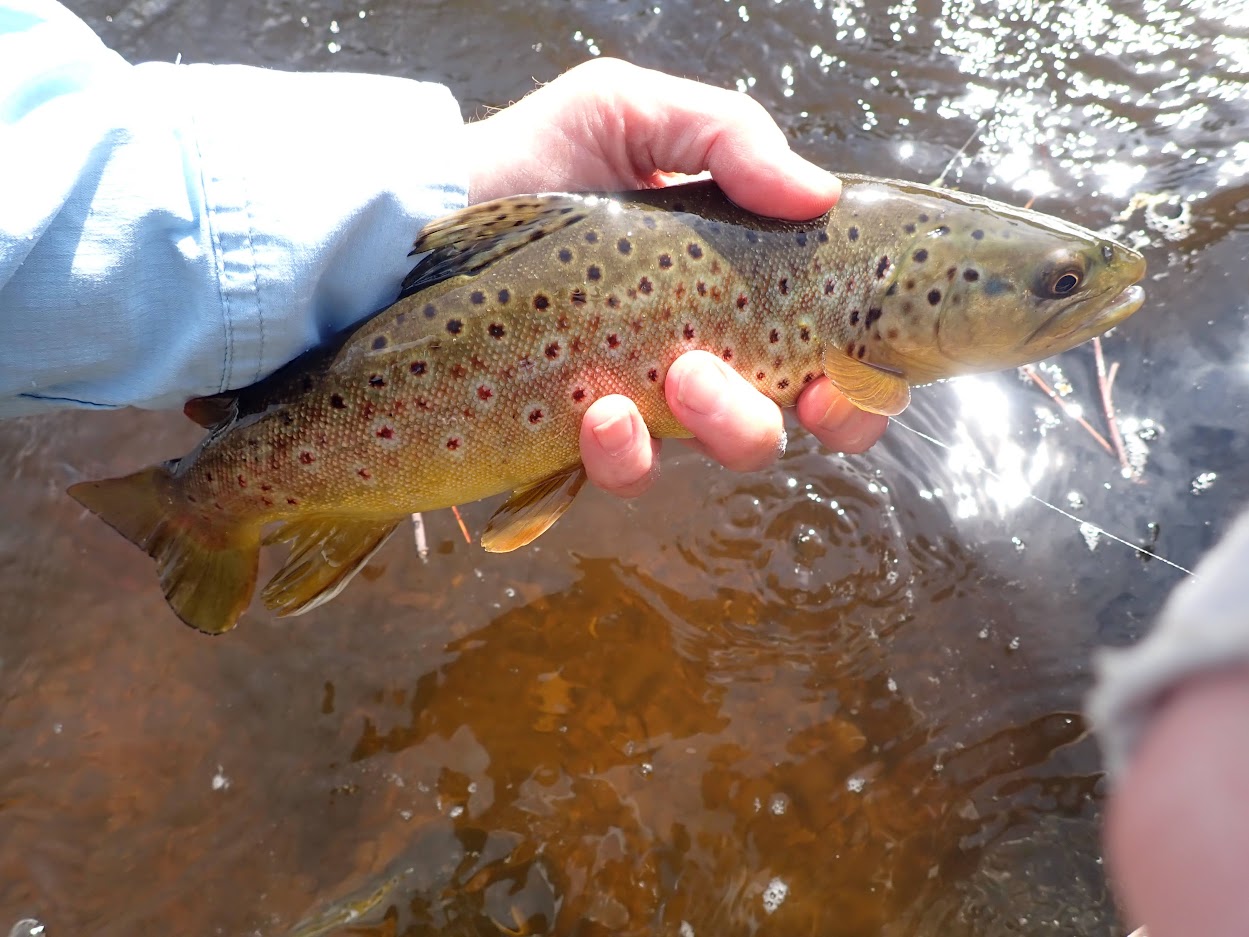 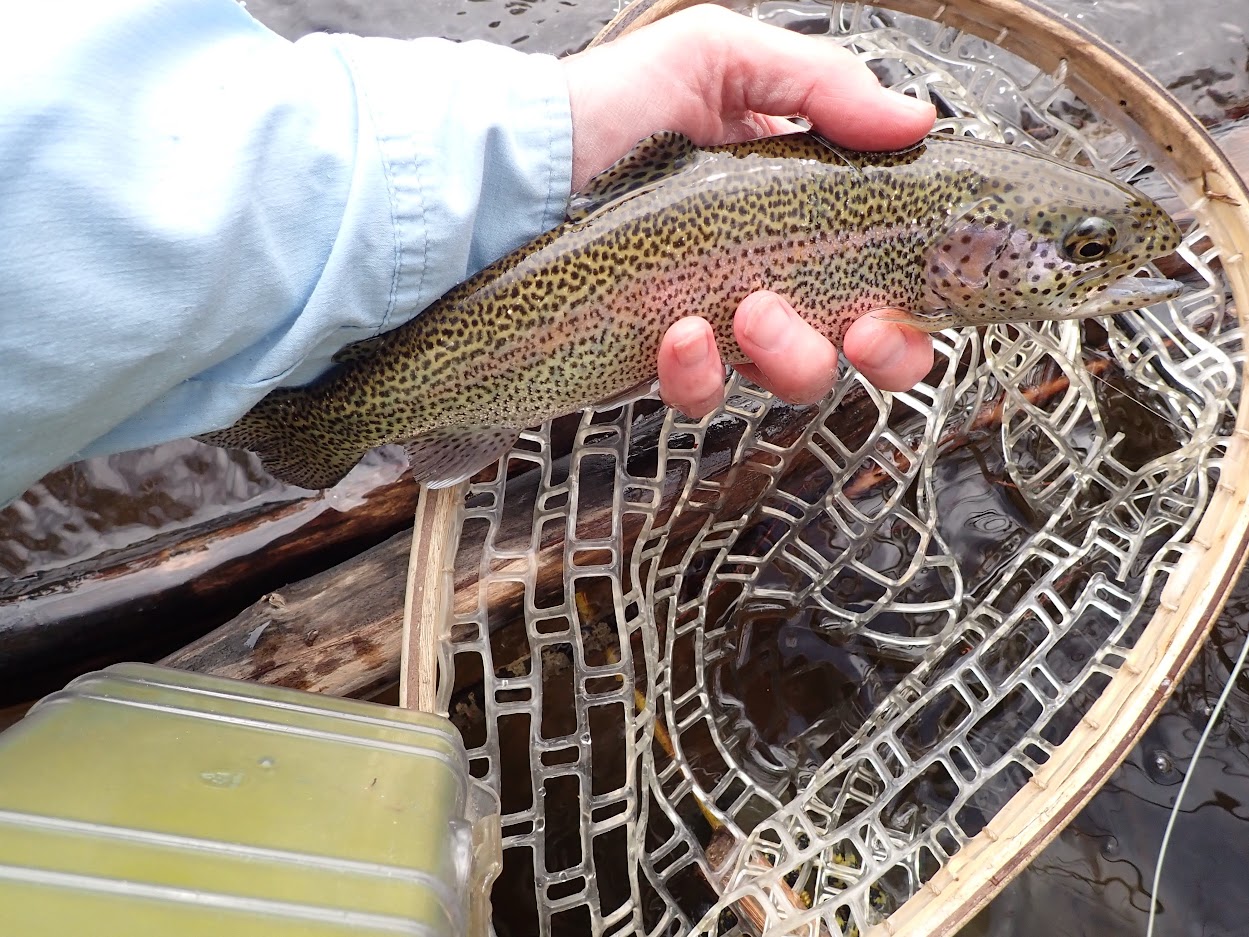 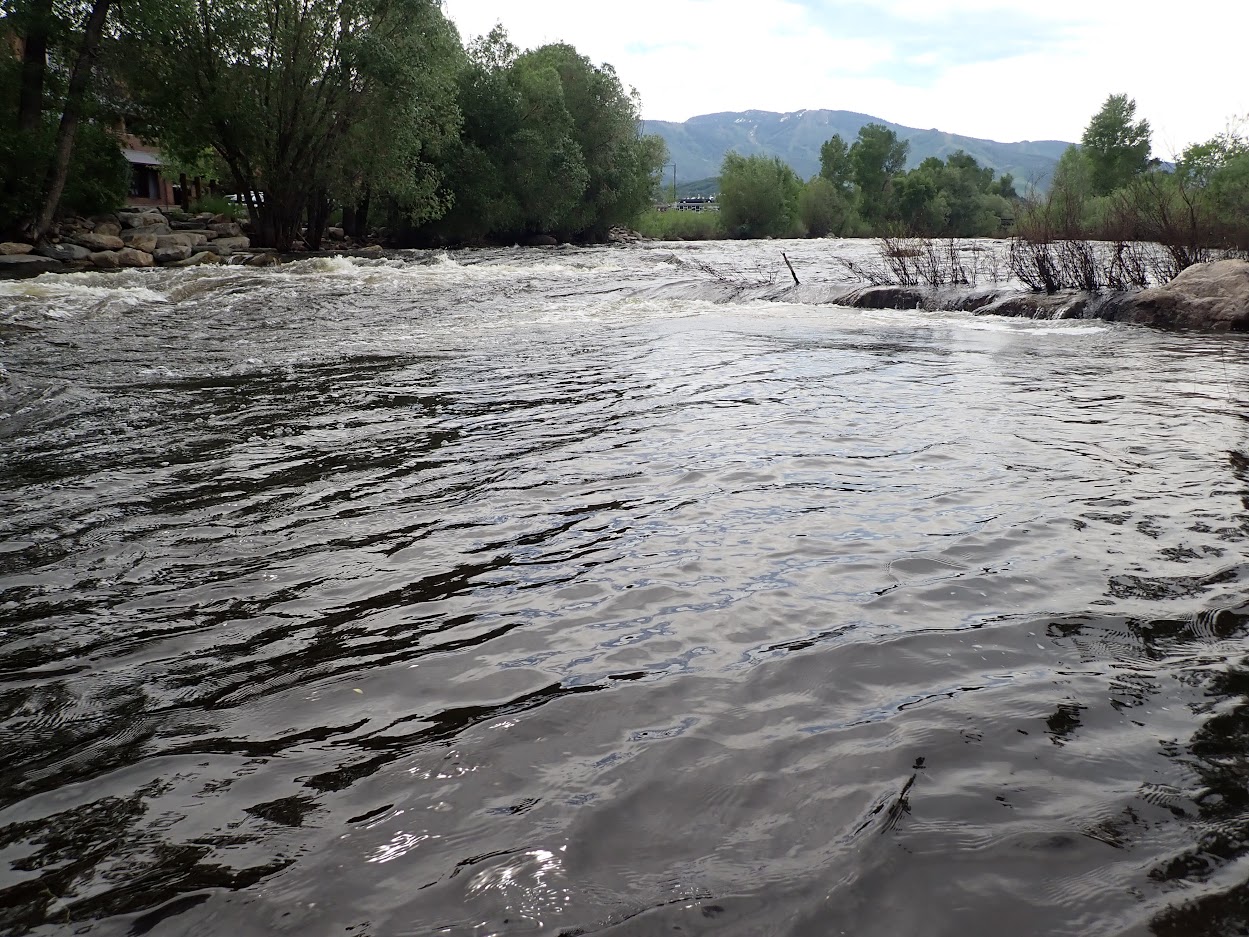 I landed ten trout between 9:00AM and noon, as six hammered the 20 incher and four favored the salvation nymph. The salvation was a star in the early phases above the hot springs and particularly in the deep areas along the bank. The morning featured a fat thirteen inch rainbow and several respectable twelve inch browns. 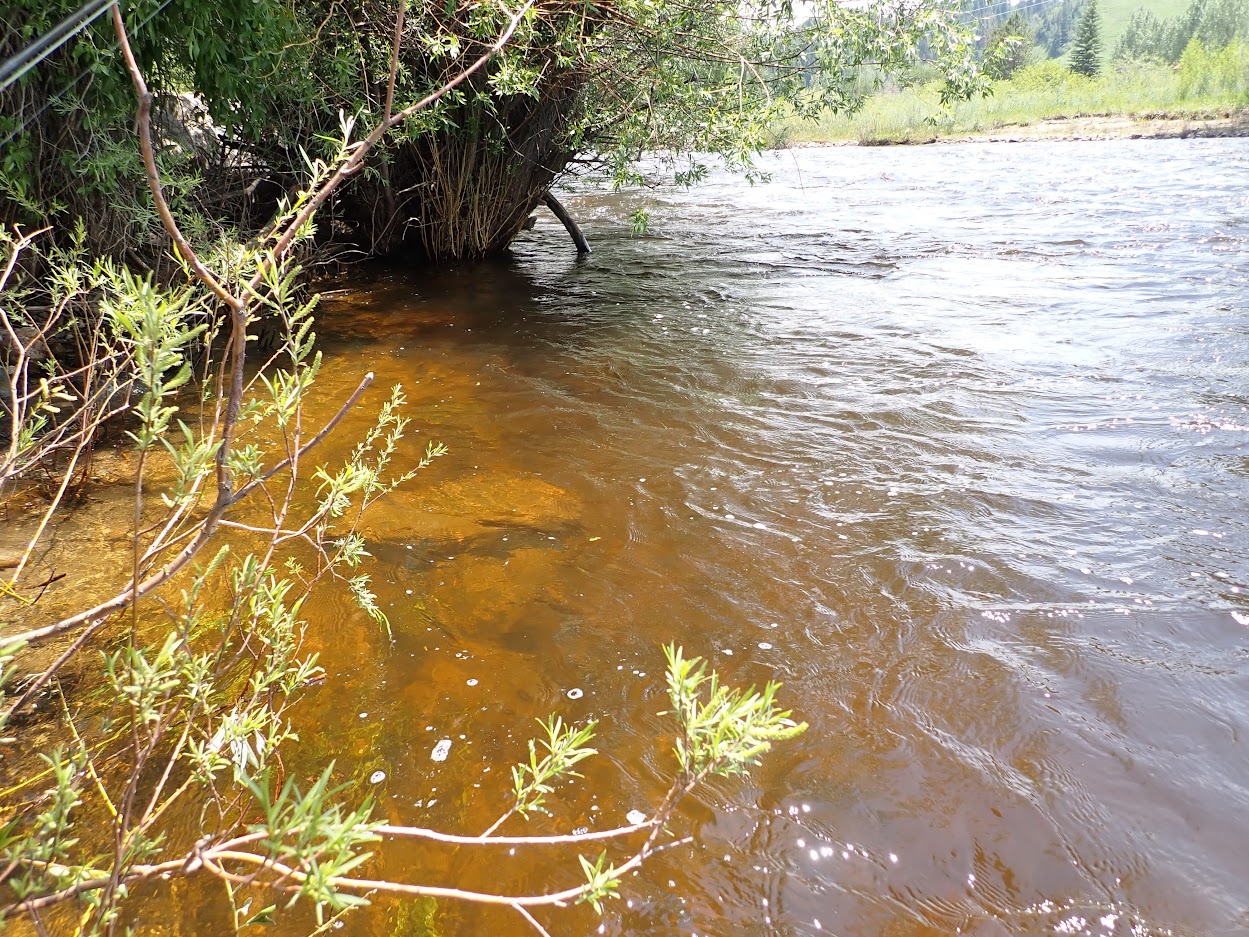 Under the Branch Delivered 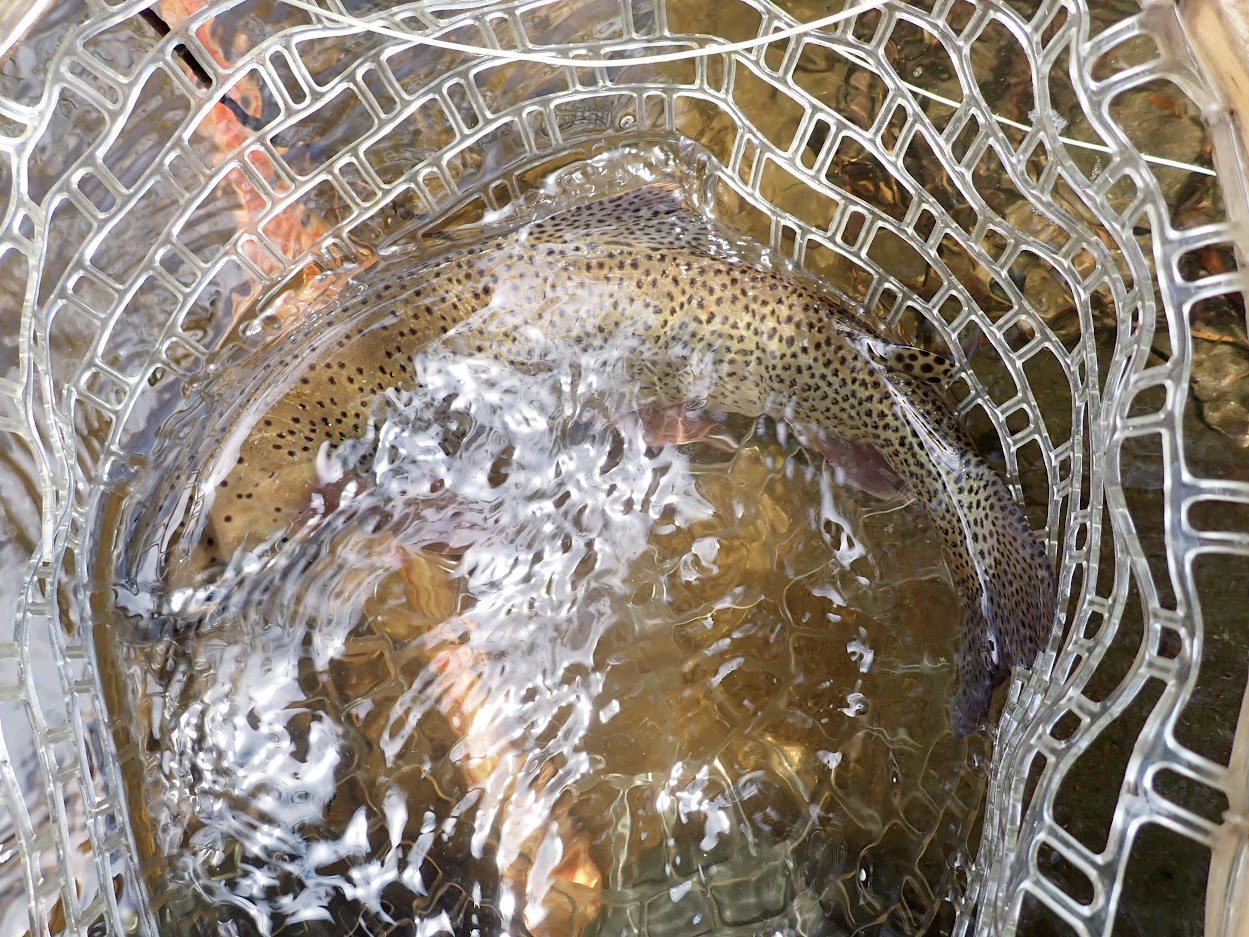 Tucked in the Net

After lunch back at the car I restocked the flies I lost, and then I hiked across the Howelsen Hill footbridge and downstream on the bike path along the north side of the river. Between one and three o’clock I added nine additional trout to the fish count. For most of this time some small size 18 mayflies with light yellow-olive bodies made an appearance. Initially I exchanged the salvation nymph for a sparkle wing RS2 under the mistaken belief that blue winged olives were fluttering above the river. The fish ignored the RS2, so I swapped it for a juju emerger with a light olive body. I surmised that perhaps the mayflies were small pale morning duns, and the light olive wet fly represented an attempt to imitate the slightly larger mayfly. The combination of the 20 incher and juju emerger performed quite well. I probably landed six of the nine in the afternoon on the 20 incher and three on the emerger. 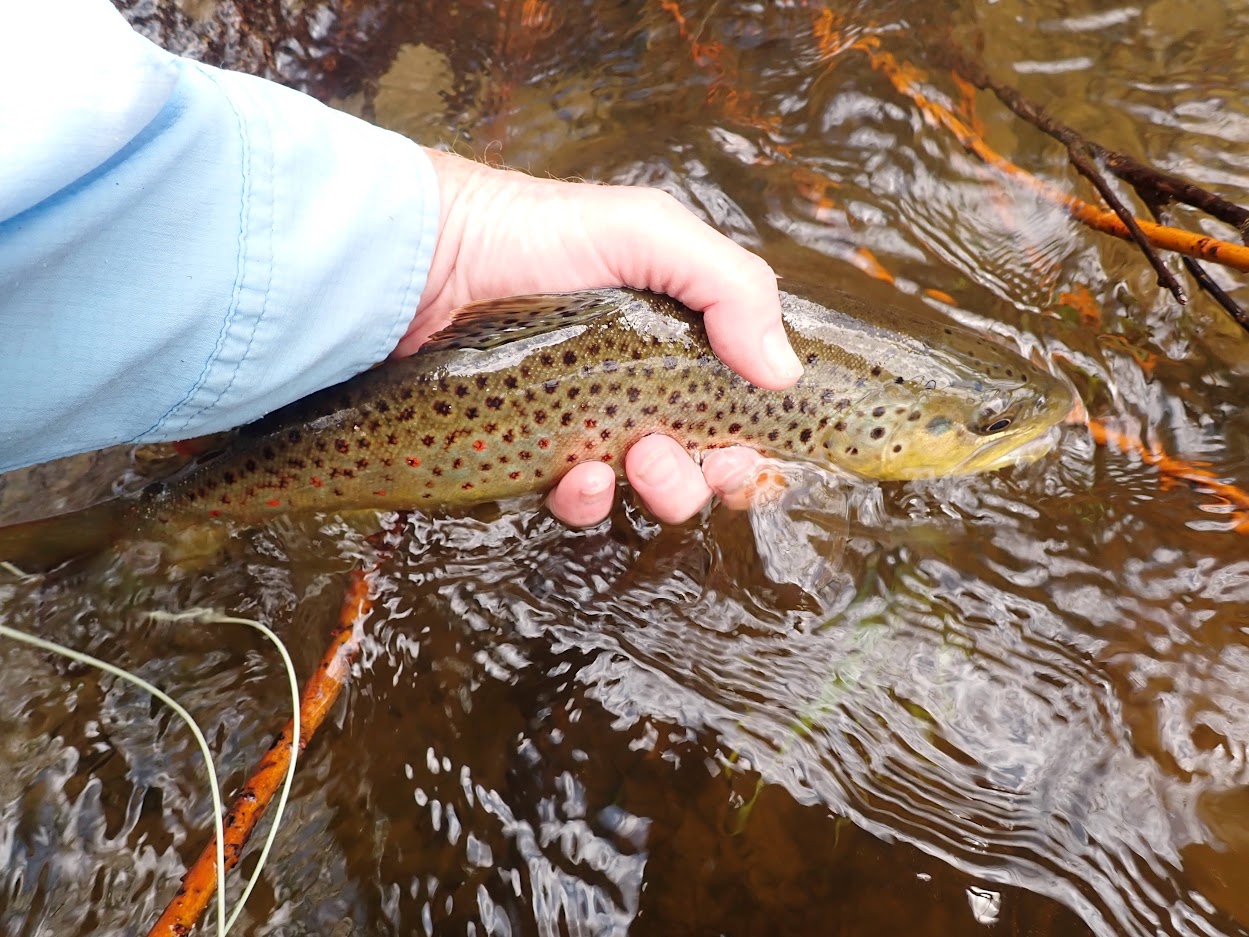 The highlight of the afternoon and the day was a sixteen inch rainbow trout that snatched the juju in a back eddy in front of a tree. I shot a low cast beneath a limb and then allowed the current to pull the top fly back toward the tree trunk until the hungry rainbow latched on to the emerger.

I progressed past the tube and inflatable rental shop and fished along the bank behind a restaurant, and here I landed a fine thirteen inch brown trout that lurked along the rocky bank in typical brown trout fashion. On the north shoreline I mostly descended to the river where current breaks and slow water attracted my attention, and after the requisite number of casts I returned to the bike path expressway, until I spotted another promising open and sheltered area. Given the relatively high flows I was pleased with my day on the Yampa within the town of Steamboat Springs.