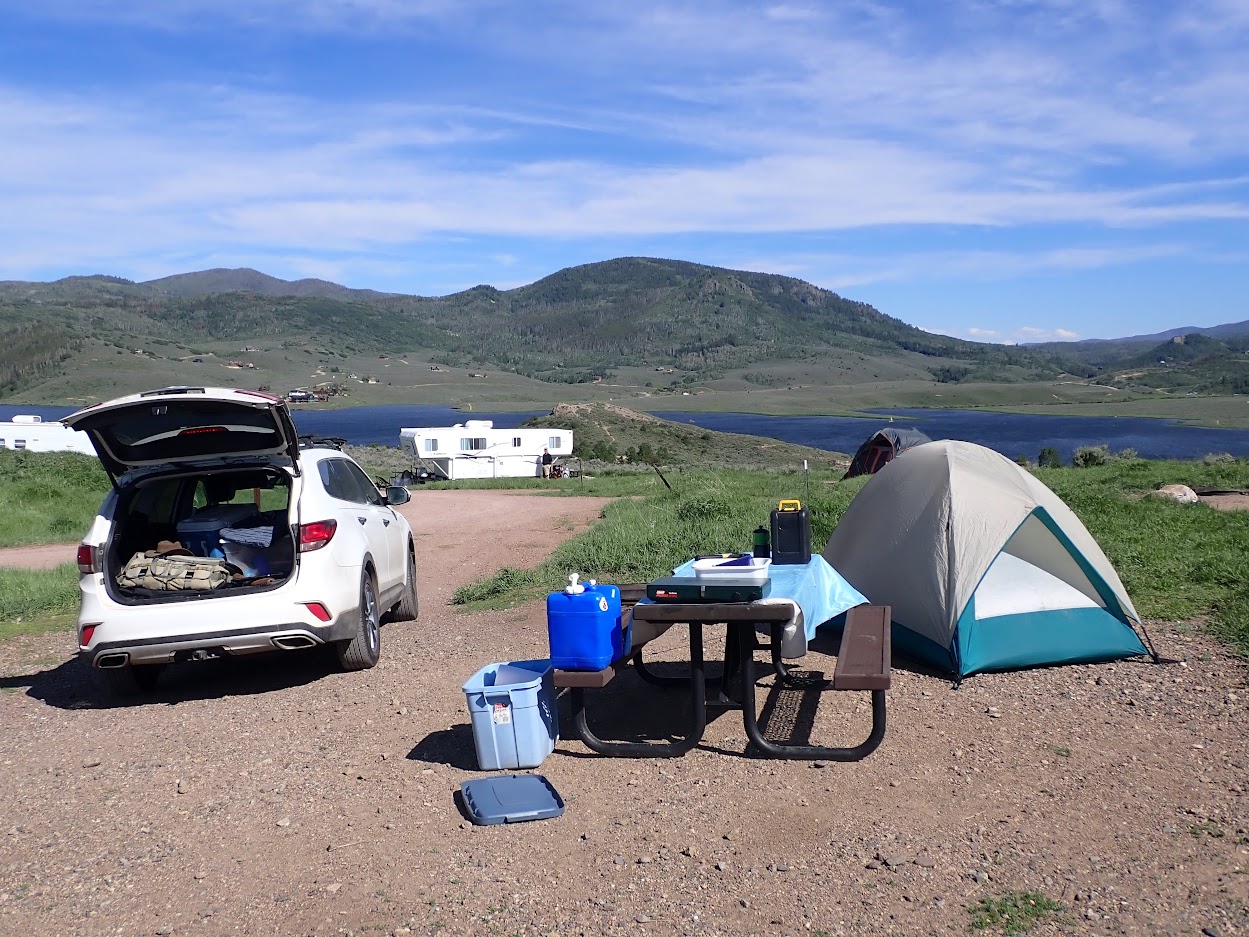 The Lake in the Background

After a three hour plus drive I arrived at campsite number 87 on the McKindley Loop at Stagecoach State Park, and I set up my tent and ate my dinner of soup, bread and carrots. Once the dishes were cleaned up and with daylight lingering until 9PM, I decided to make the short drive to the Stagecoach tailwater of the Yampa River. Only one other vehicle was present, and I was pleased with this revelation. I quickly assembled my Sage One five weight with the hope of landing some larger than average trout, and I departed along the dirt road that leads upstream toward the dam. As I ambled along, I spotted a fisherman downstream from the parking lot, so I knew that I had the entire river above the other angler to myself. Needless to say, I was pleased. 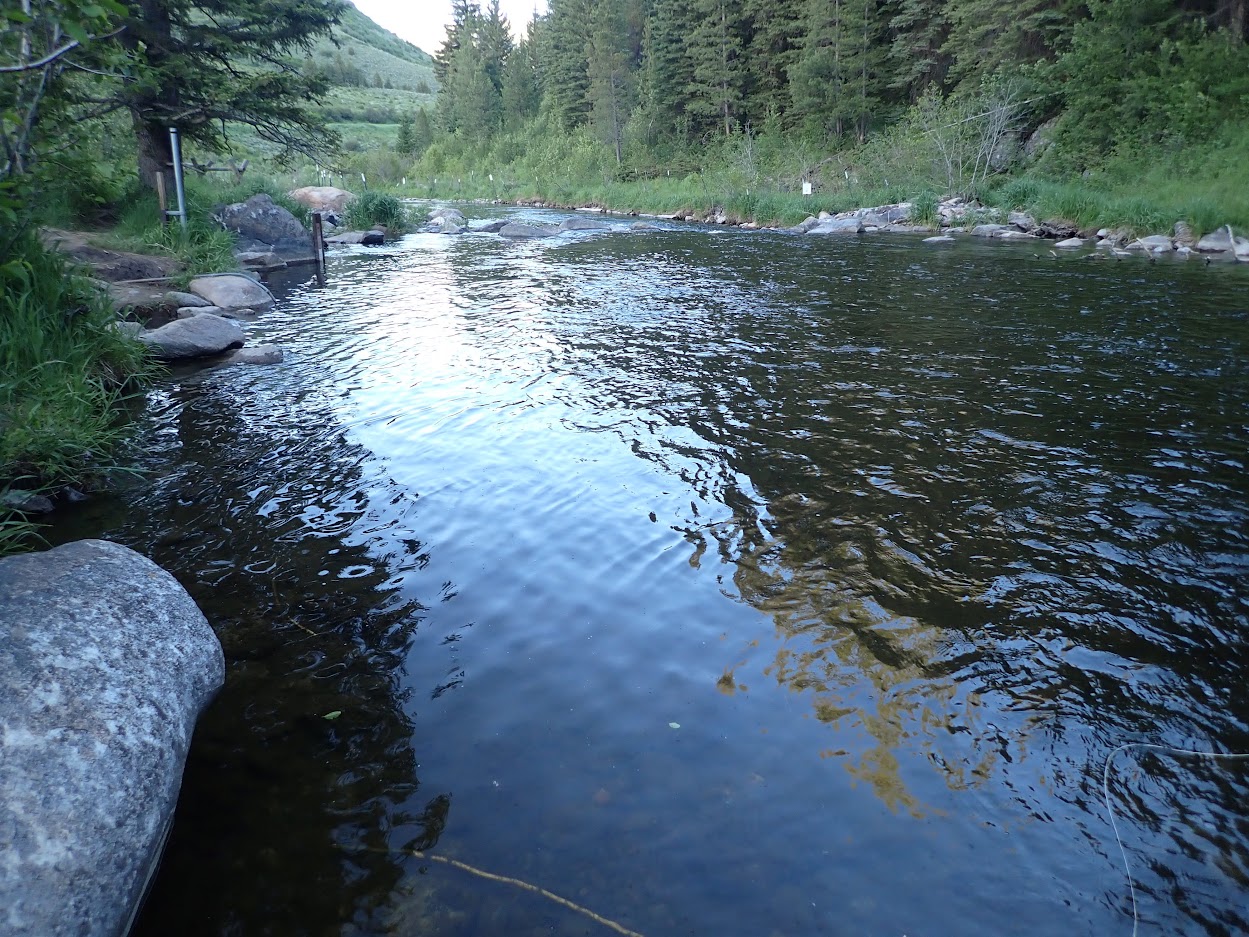 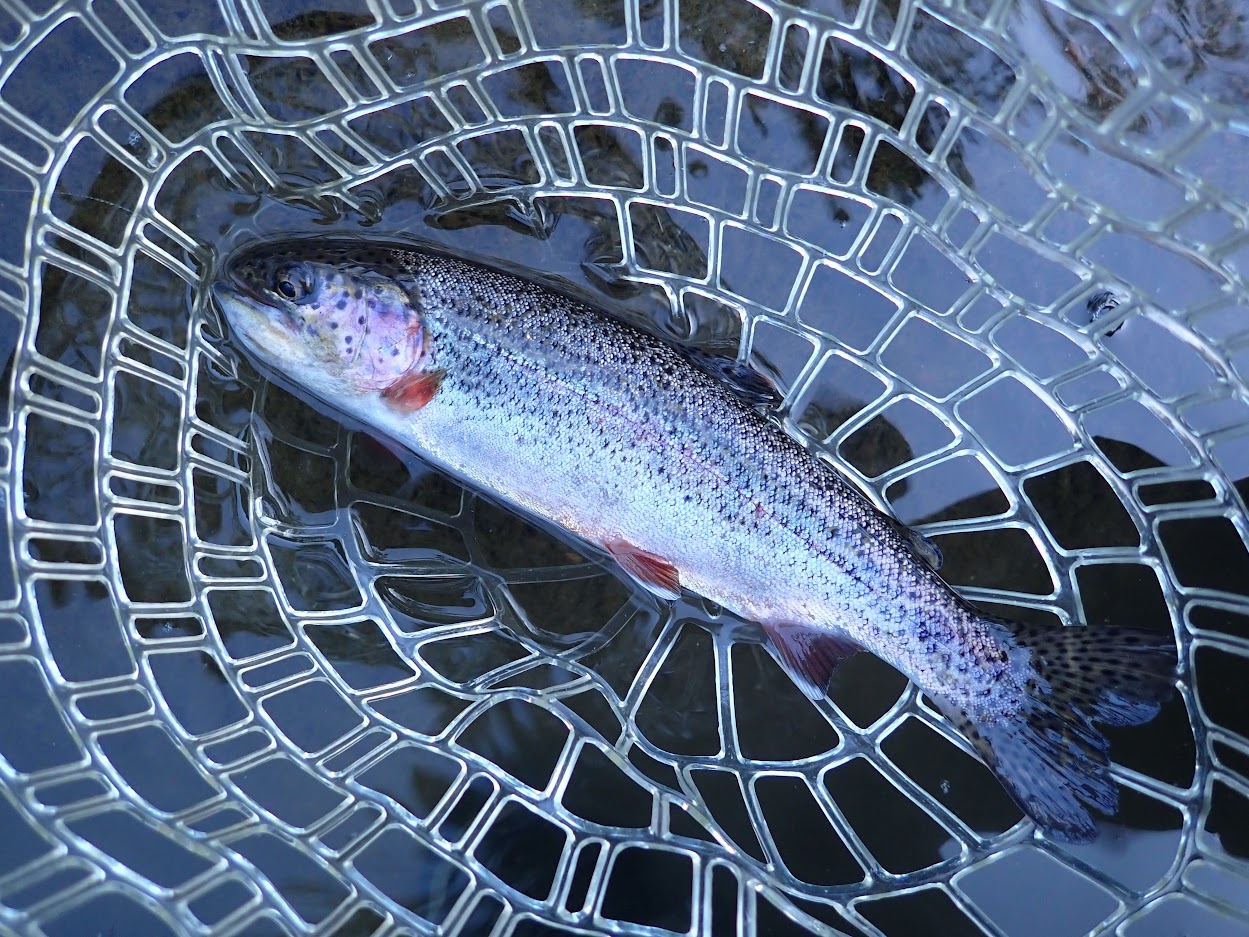 I immediately decided to head to my favorite pool next to and above a tall evergreen tree. The reported flows were 47 CFS, and the river looked absolutely gorgeous. A quick scan of the pool upon my arrival revealed a few sporadic rises, so I decided to launch my fly fishing evening with dry flies. The weather was very pleasant with temperatures in the seventies as I began, but the disappearance of the sun, when I quit at 8:45PM, created quite a chill. Only one other car was present in the lot, when I arrived, but another young man named John pulled in, as I departed the parking lot. I know his name, because I chatted with him, when we both returned to our cars at the end of the evening. John does marketing communications for Honey Stinger, a producer of honey-based energy products in Steamboat Springs. 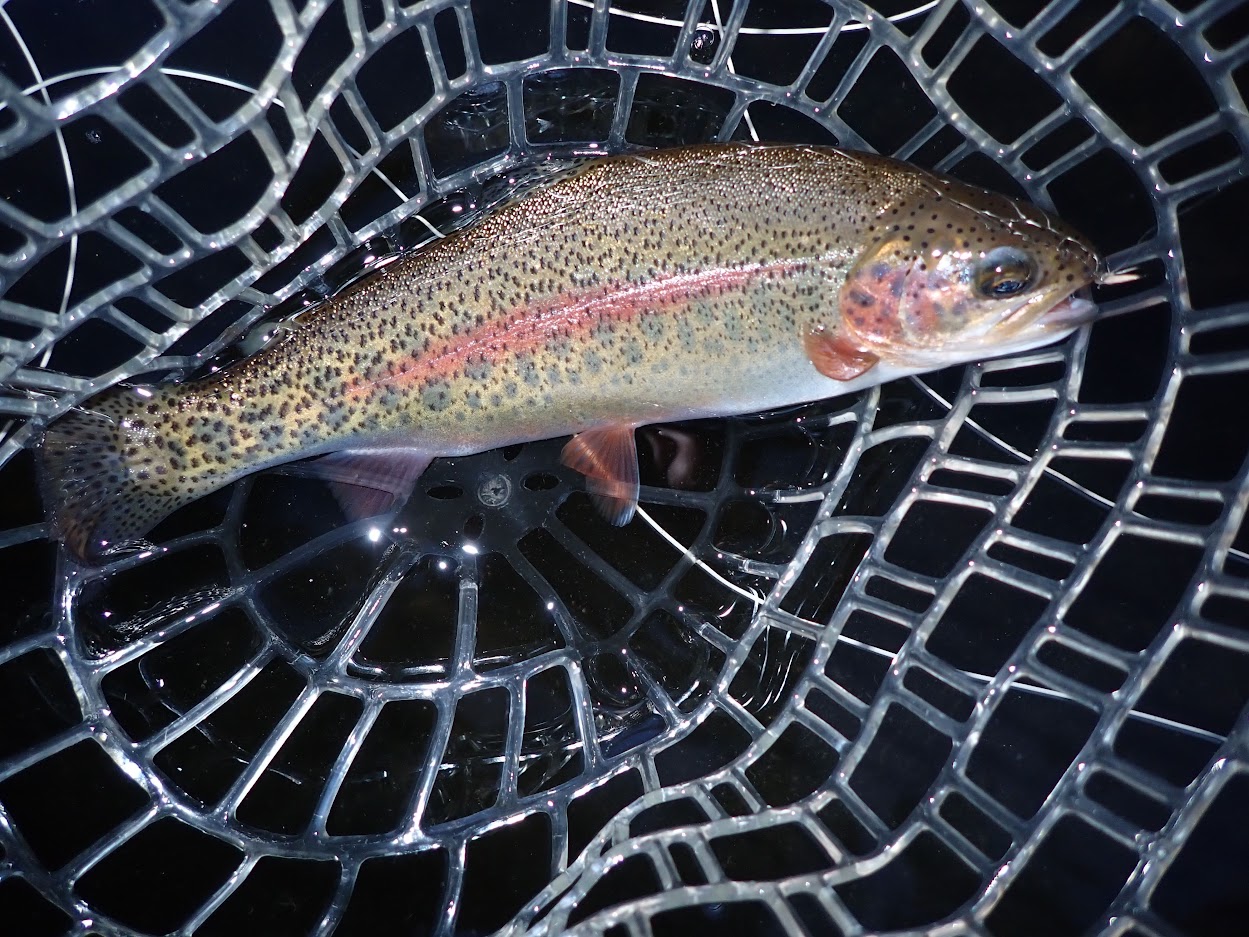 When I arrived at my favorite pool, I rigged with a size 14 yellow stimulator, and it generated a couple refusals. I progressed to a desperate caddis, but I snapped it off in a tree in short order. Before the fly loss, however, I determined that the fish were not interested, and it was hard to track in the evening light. Next I chose a size 16 parachute Adams, always a solid choice, when it is unclear what the fish are responding to. The Adams was mostly ignored, although I did get on the scoreboard with a small rainbow trout and brook trout. Just as I was gaining confidence in the Adams, the parachute hackle unraveled, and rather that replacing it with a duplicate, I opted to try a size 16 light gray comparadun, but it only produced a couple refusals. I weighed a return to an Adams but instead downsized to a size 18 light gray comparadun, and this choice proved a winner, with three landed and two temporary hook ups over the remainder of my time on the river. The three trout that rested in my net included a fat thirteen inch rainbow trout and a gorgeous thirteen inch brook trout. I consider any brook trout in excess of thirteen inches to be a prize. 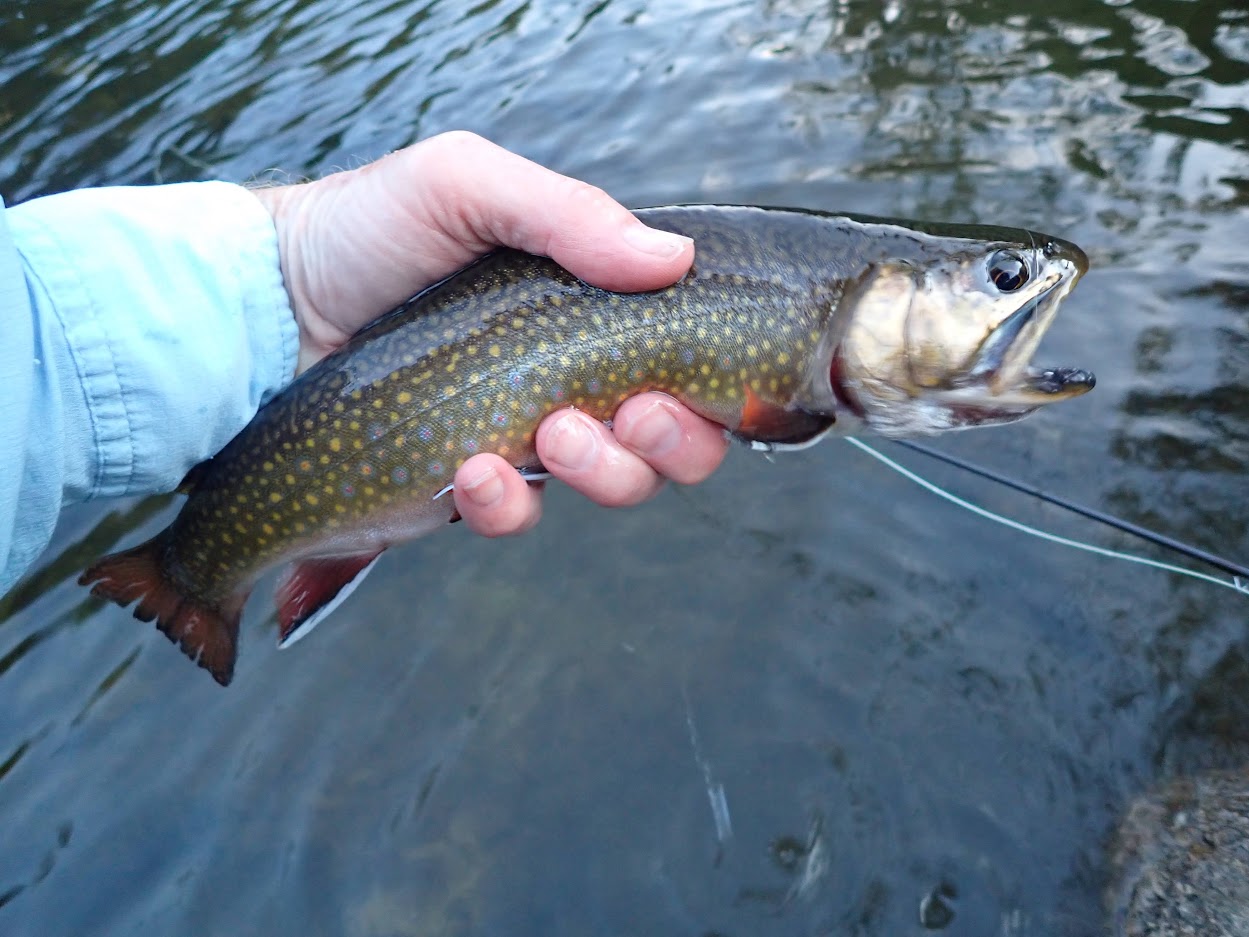 In summary I landed five trout in 1.25 hours of fishing. I essentially had the short special regulation section of the Yampa tailwater to myself, and that is a rarity. Two of the landed fish stretched to thirteen inches, and I cast dry flies the entire time. The start of my camping and fishing adventure on the Yampa was off to an auspicious start.