Location: The second stretch of public water beyond Taylor Reservoir and upstream.

After a pleasant evening at Lottis Creek, Danny and I woke up ready for another day of fishing on the Taylor River. We agreed to sample the upper Taylor River above Taylor Reservoir in the morning, and then adjourn to the tailwater section for the afternoon. It was quite cool as we departed at 8:30 to begin our Friday fishing adventure, but once the sun rose higher in the sky it would become a pleasant day with high temperatures in the low 80’s. 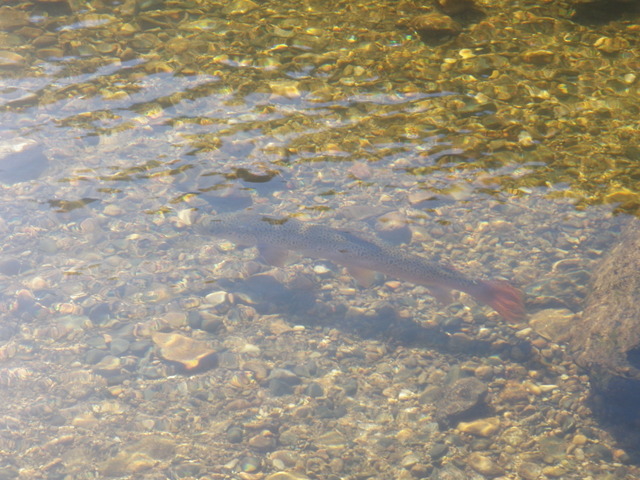 A Huge Brown in the Hawg Trough

On our way to the upper Taylor, we passed the famous Hawg Trough, so we stopped so Danny could sample it. Once he spotted a few hawgs wallowing in the area above the bridge, he decided to accept the challenge of hooking one of the educated behemoths. I elected to be a spectator as the air temperature remained in the 40’s in the shade of the canyon walls, and I was not ready to acquire a chill on a summer morning. 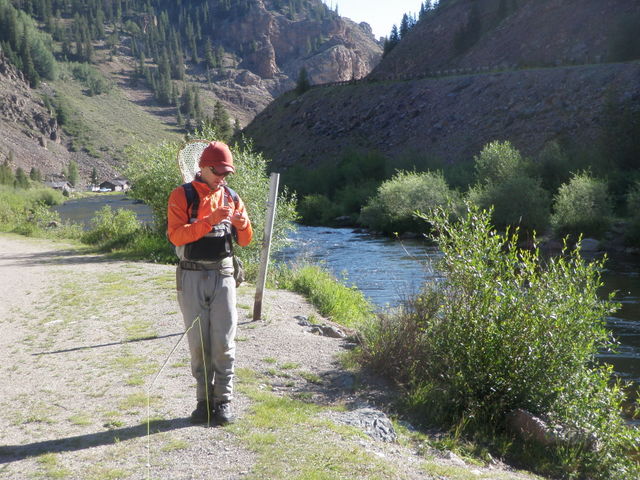 Danny Adjusts His Set Up for the Hawg Trough

Danny rigged for nymphs and tried all manner of subsurface offerings for a half hour or so,  and did manage a couple lip pricks, but no landed fish. After being adequately teased by the leviathans in the trough, we decided to cut our losses and moved on to the upper Taylor River. ATV’s were everywhere and small informal campsites were scattered across the sagebrush as we approached the first dirt lane that accessed the lower end of the second stretch of public water above the lake. 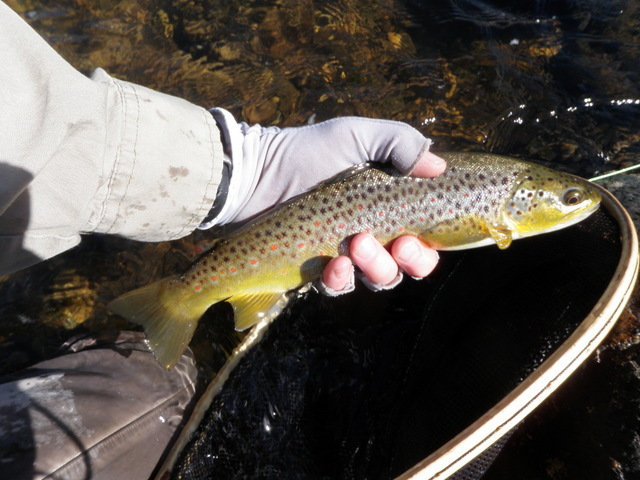 Once we were geared up, we walked briskly across the sagebrush flat to the very bottom boundary of public water, and here we began to prospect the twenty-five foot wide stream with dry/dropper combinations. I started with the same yellow Charlie Boy hopper that served me on Thursday and then added a beadhead hares ear and salvation nymph on droppers 2.5 feet below the hopper. Fifteen minutes passed, and my hopper dipped, and I landed a nice thirteen inch brown. Shortly thereafter a bit further upstream a similar sequence played out, and I netted a second fine brown in the thirteen inch range. I would eventually learn that both of these fish were the nicest of the morning, and they inhaled the salvation nymph. 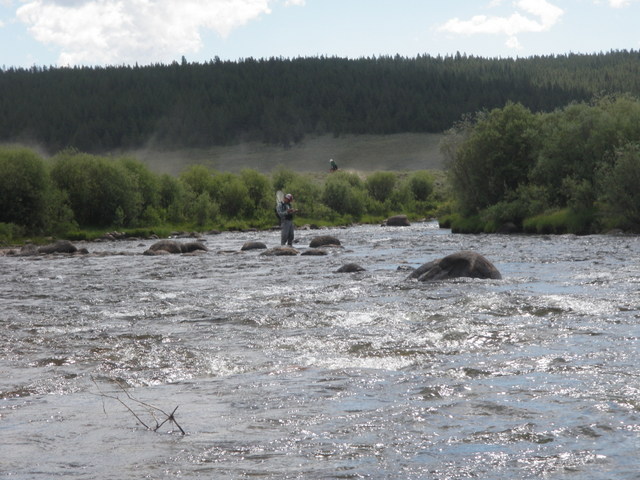 The fishing slowed down after the first half hour, but I continued upstream and covered quite a bit of water and landed six more smaller browns. Two were fooled by the beadhead hares ear, and halfway through the morning I exchanged the salvation for a beadhead pheasant tail. This move paid dividends as the last four fish attacked the pheasant tail as I imparted movement to the fly early and late in the drift. I am guessing that the fish were tuned in to PMD nymphs moving in the current in advance of a hatch later in the day.

After two hours of fishing, Danny and I each landed eight fish, and we decided to return to the Taylor tailwater. I covered quite a bit of water during the morning and had decent success, and I discovered that the deeper runs and pools produced most of the fish. We threw our gear in the Santa Fe and drove back along the dirt road that skirted the reservoir and stopped at Lottis Creek to eat lunch and pack up the tent and camping gear.