I love the proximity to western streams and rivers attainable via camping, and on Tuesday and Wednesday I took advantage of this situation to fly fish in some small backcountry headwater streams. The large rivers remained higher than average due to the high snow pack and late run off, but I discovered that the smaller high elevation tributaries were transitioning into perfect conditions. 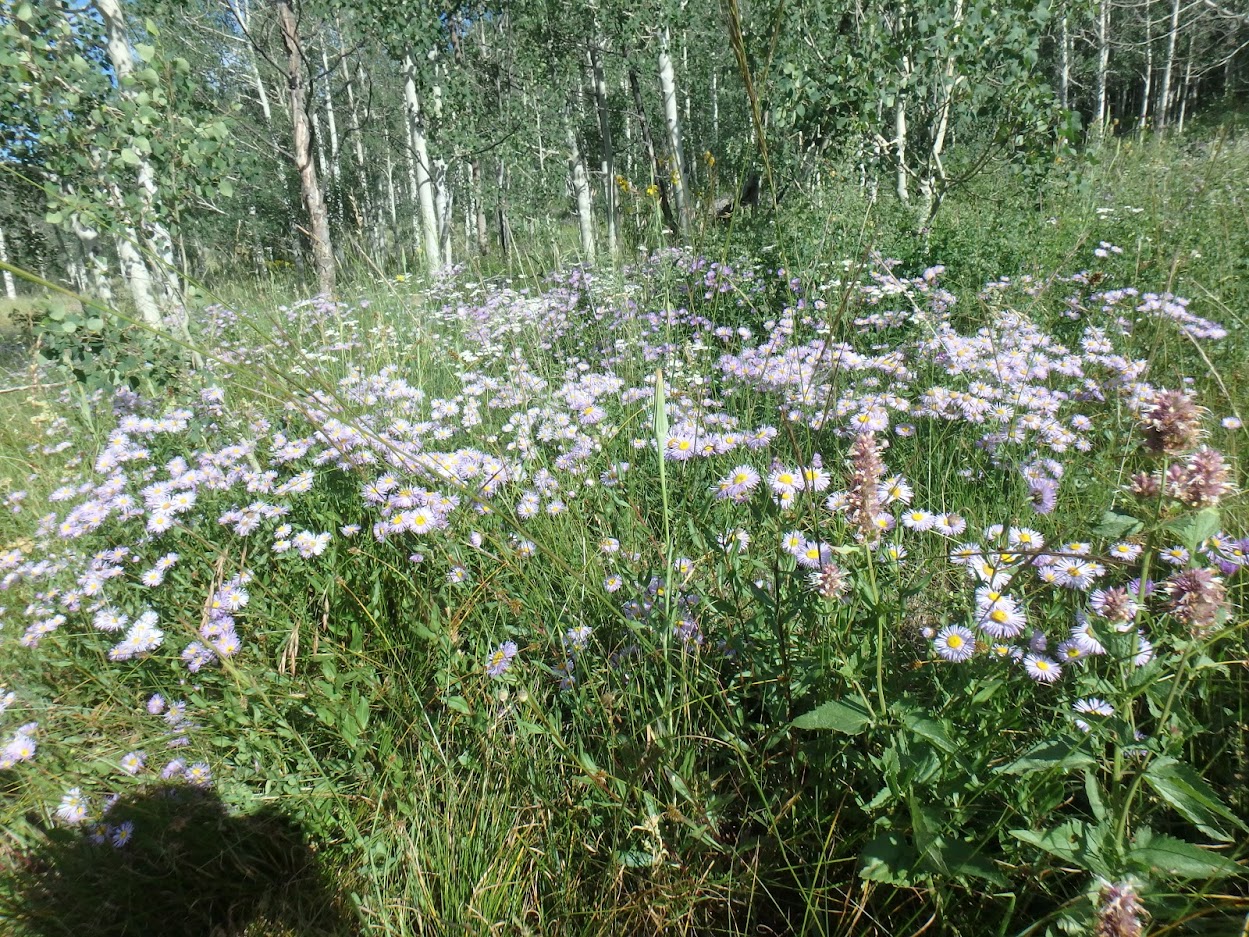 Asters in Their Prime

I arrived at the trailhead of my chosen destination by 9AM, and after assembling my Sage four weight, I pulled on my wading socks and wading boots for a day of wet wading. The temperature was in the low sixties, but I expected highs in the upper seventies, and my two mile hike was more comfortable without the discomfort of perspiration trapping waders. My choice proved to be a solid call, as I enjoyed the coolness of the cold mountain stream, while the air temperature soared to the upper seventies. 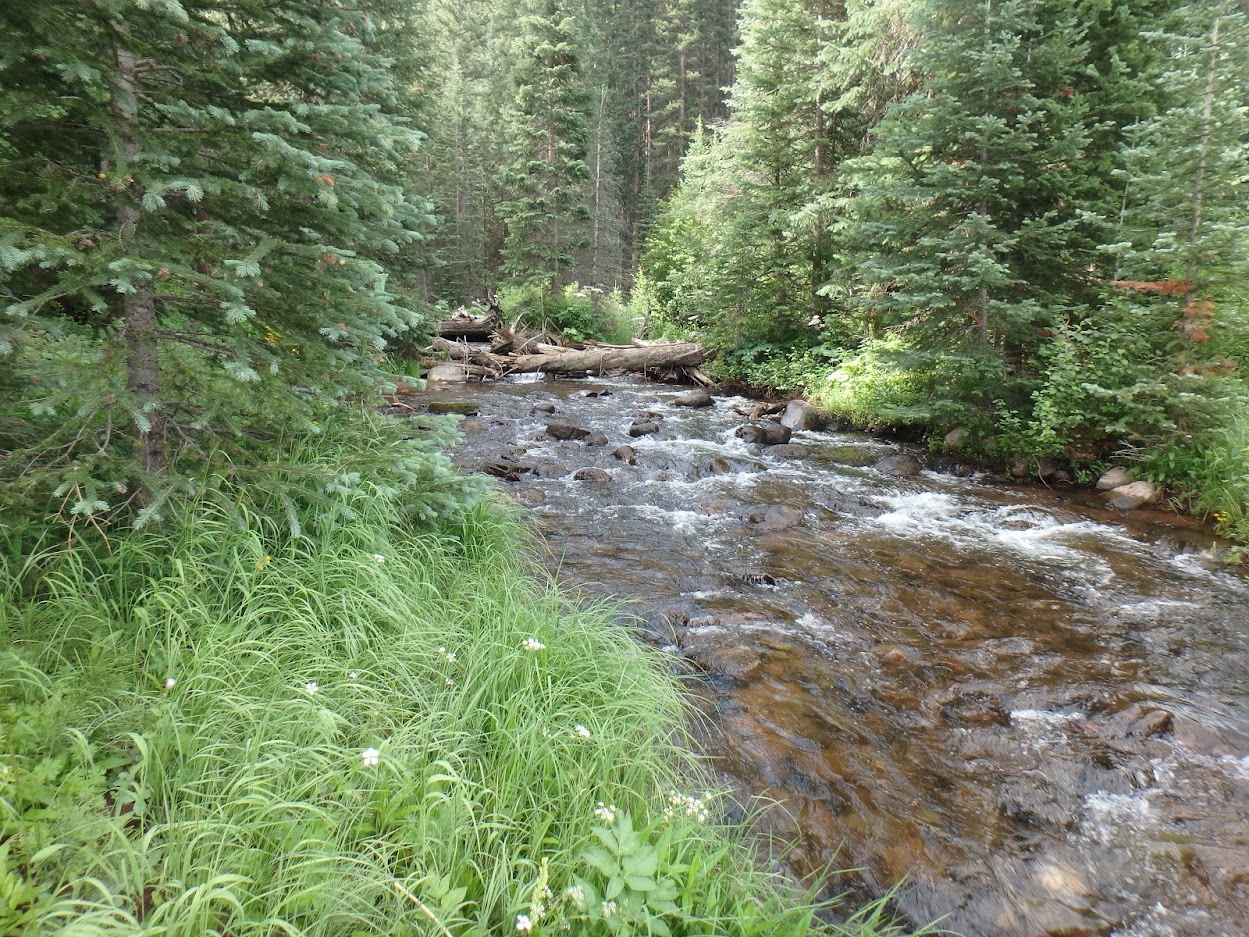 I began my day at the bottom of a long narrow canyon section, where the trail veered away from the stream. Although the flows appeared to be nearly ideal, I was a bit concerned that the high gradient and slightly above average water level, would make wading a challenge and reduce the number of prime pools and pockets. This fear was realized to some extent, although I managed to land eighteen trout, and I safely reached the point where the stream rejoined the trail. 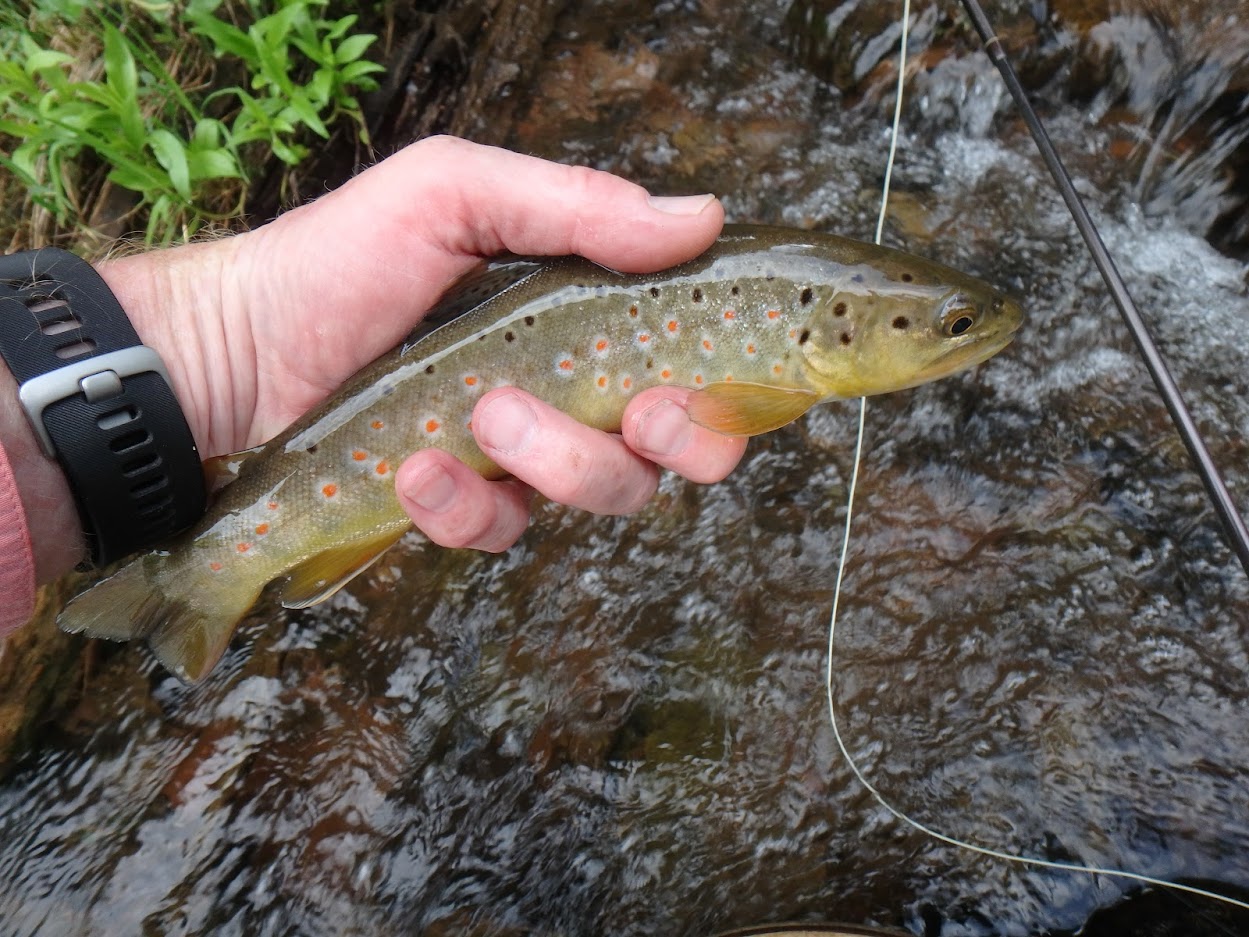 I began my quest for wild trout with a tan pool toy hopper, and on the first cast an eleven inch brown trout rushed to the surface and slammed the terrestrial imitation. Was this an auspicious sign? I moved on with optimism flooding my consciousness, but that feeling was crushed in short order, when I set the hook on a refusal, and the hopper hurtled into an evergreen branch thirty feet above me. Retrieval was not an option, and I applied direct pressure to the line and popped off the first fly of the day. 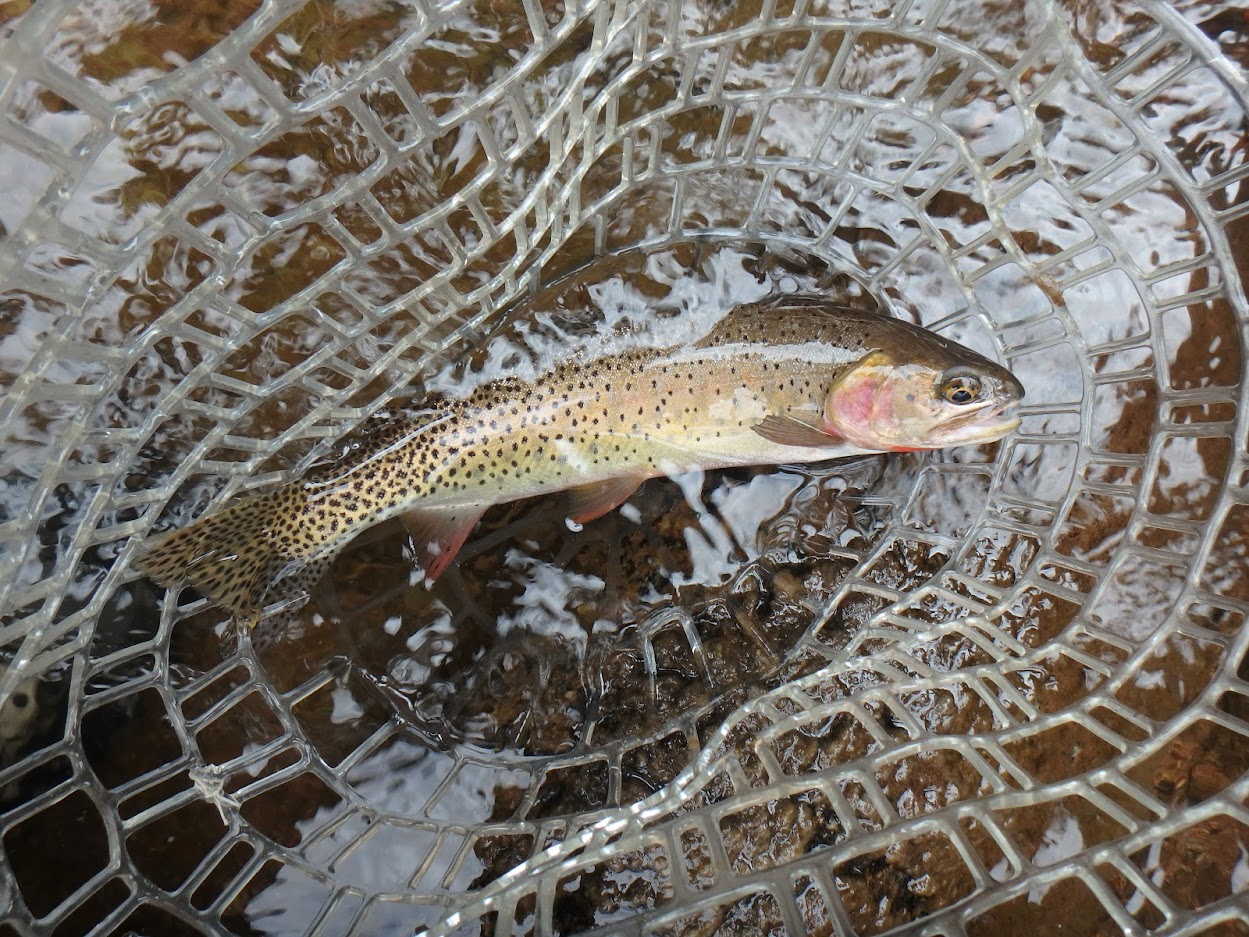 Between fish number one and my loss of the pool toy, I observed several refusals, so I used the break off as an opportunity to downsize. I replaced the hopper with a size 14 brown stimulator, and this fly renewed the interest of the resident trout. The fish count increased to four, but then the heavily hackled attractor became water logged, and I implemented another switch. I longed for a fly that did not require constant dipping in dry shake, so I knotted a size 10 Chernobyl ant to my line. The over sized ant, which I suspect the trout viewed as a beetle, accounted for a few fish, but I was prospecting quality pools with no response, so I once again made a change.

On Tuesday I lost two peacock body hippie stompers, so I was conscious of preserving my limited supply for later in the season; and, therefore, I experimented with a red version, and for the first time on the day I added a three foot dropper with an ultra zug bug.This combination worked for a bit, but I sensed that the zug bug could be improved upon, so I swapped it for a beadhead hares ear. The red hippie stomper and hares ear combination clicked, and the fish count climbed to fourteen before I paused for lunch in a gorgeous setting next to a spectacular pool. 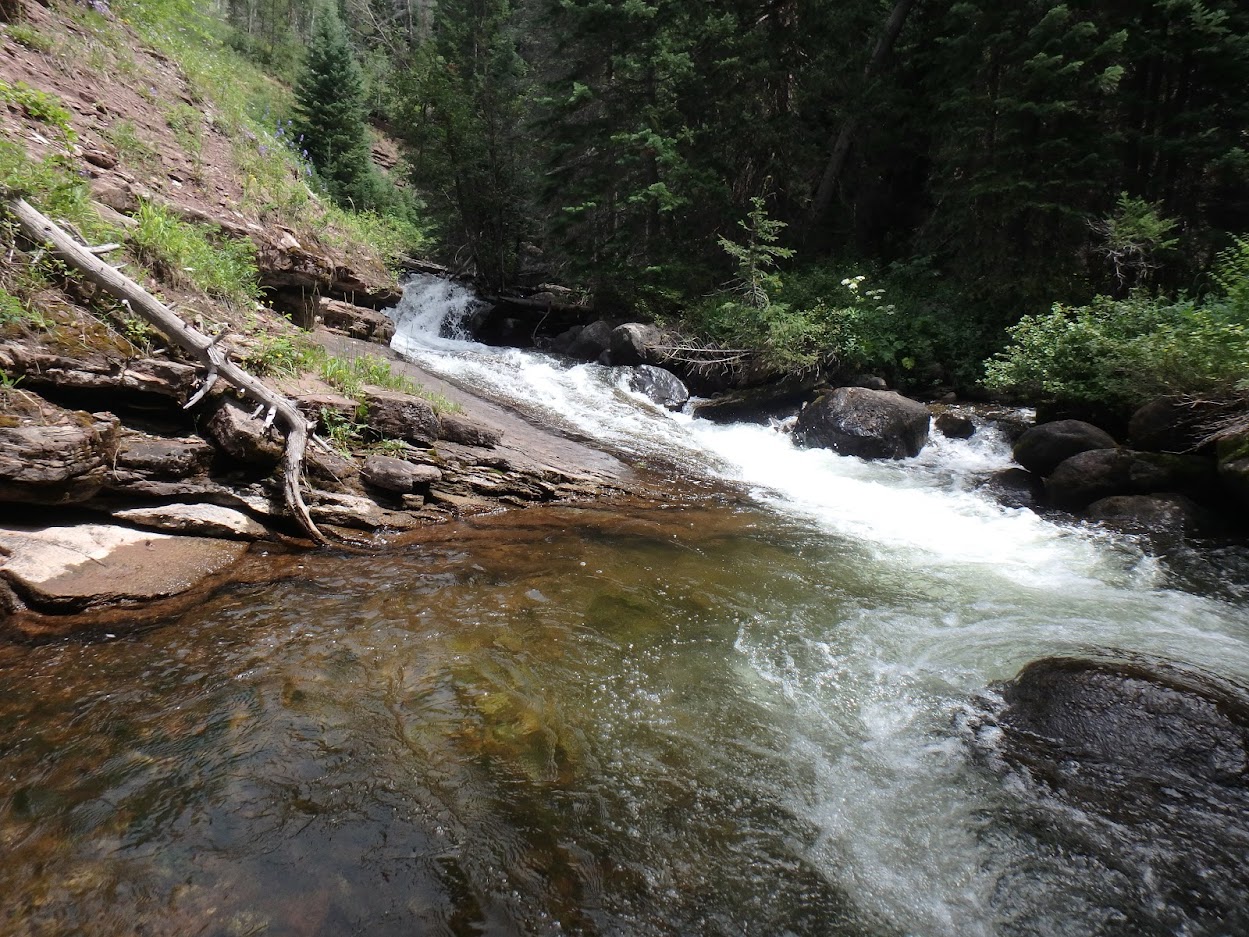 As I munched my sandwich and carrots, my state of mind was very satisfied. The quantity of fish landed in the morning was above average, and the quality of the trout was excellent. Size was not a plus, as the largest extended to twelve inches, but the coloring and species variety were exceptional. I landed two cutthroats, a rainbow and a bunch of brown trout from the high country creek. 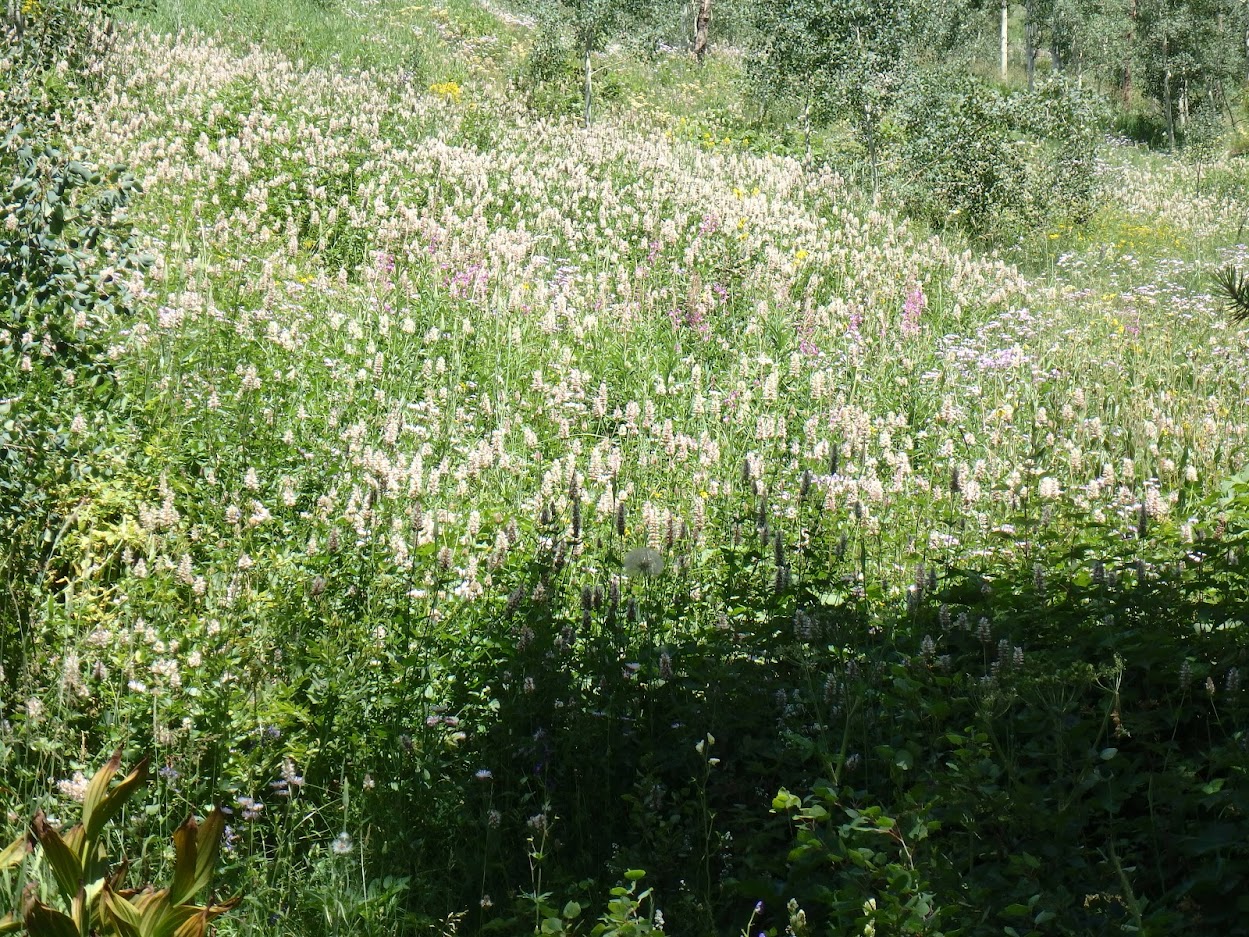 If the story ended here, I would be an ecstatic fisherman, but it continued. Between noon and 3PM, when I embarked on my exit hike, I added four trout to the tally. Advanced math skills are not required to calculate the ridiculously low catch rate over three hours of fishing. What happened? The main factor that I blame was the increased gradient of the section that I chose to fish. Much of my time and energy were invested in negotiating the cascading water and high rock walls, and the prime holding locations were minimal. Refusals and temporary hookups far outnumbered landed fish, and I am unable to explain that circumstance. 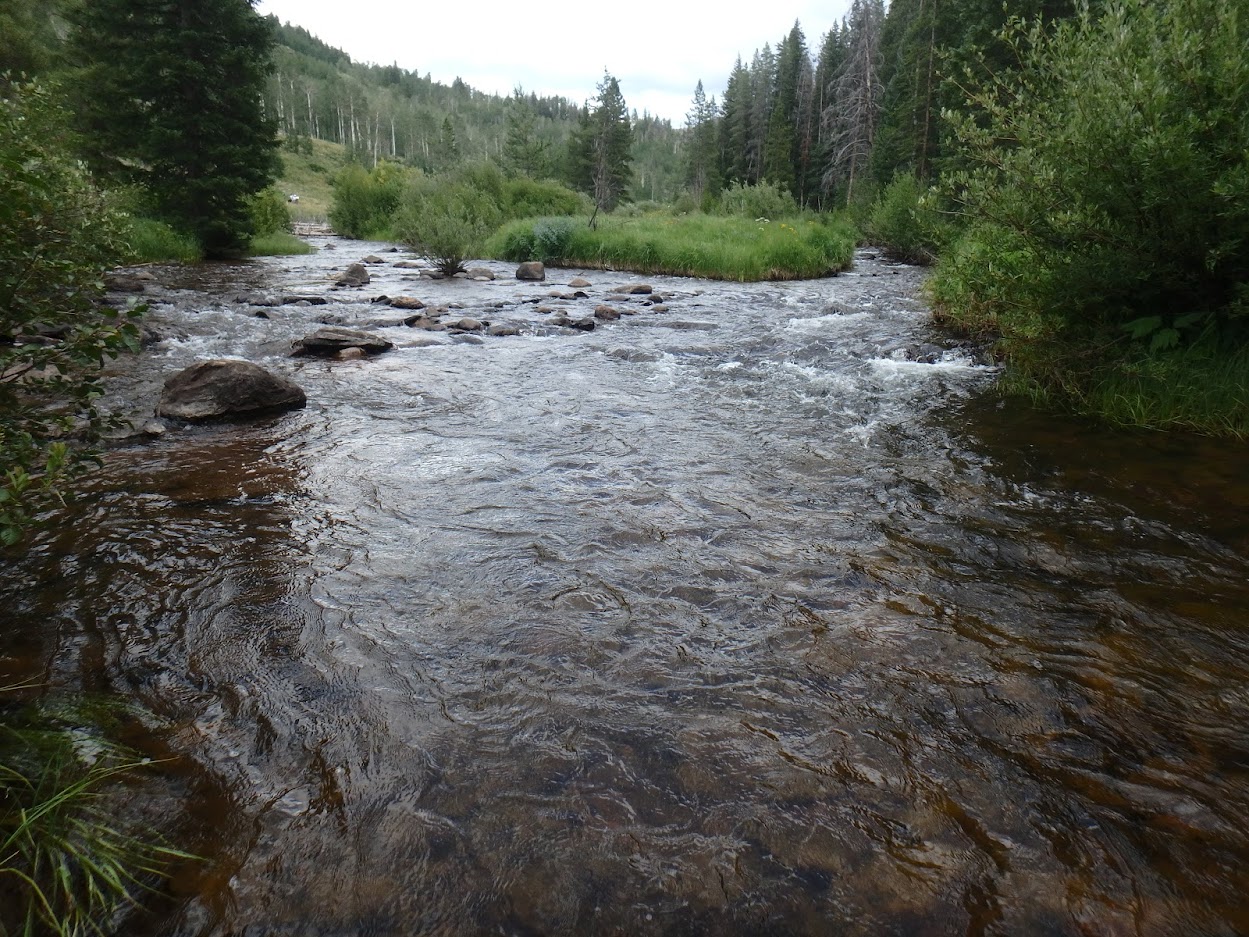 By two o’clock I reached a point where the slope of the northern side of the canyon was manageable, so I executed an exit and found the trail. I hiked back toward the parking lot for another .5 mile, until I reached a nice meadow section. A guide and two anglers were present at the downstream end of the lower gradient stretch, so I passed them and cut over fifty yards upstream. I spent thirty minutes prospecting the wider and shallower section, and I added two brook trout to the mix. I welcomed the easier wading, but the downside to this luxury was smaller fish and fewer prime holding spots. I also suspect that the more easily accessible portions of the stream attract more fishing pressure. As with life, there are always trade offs. 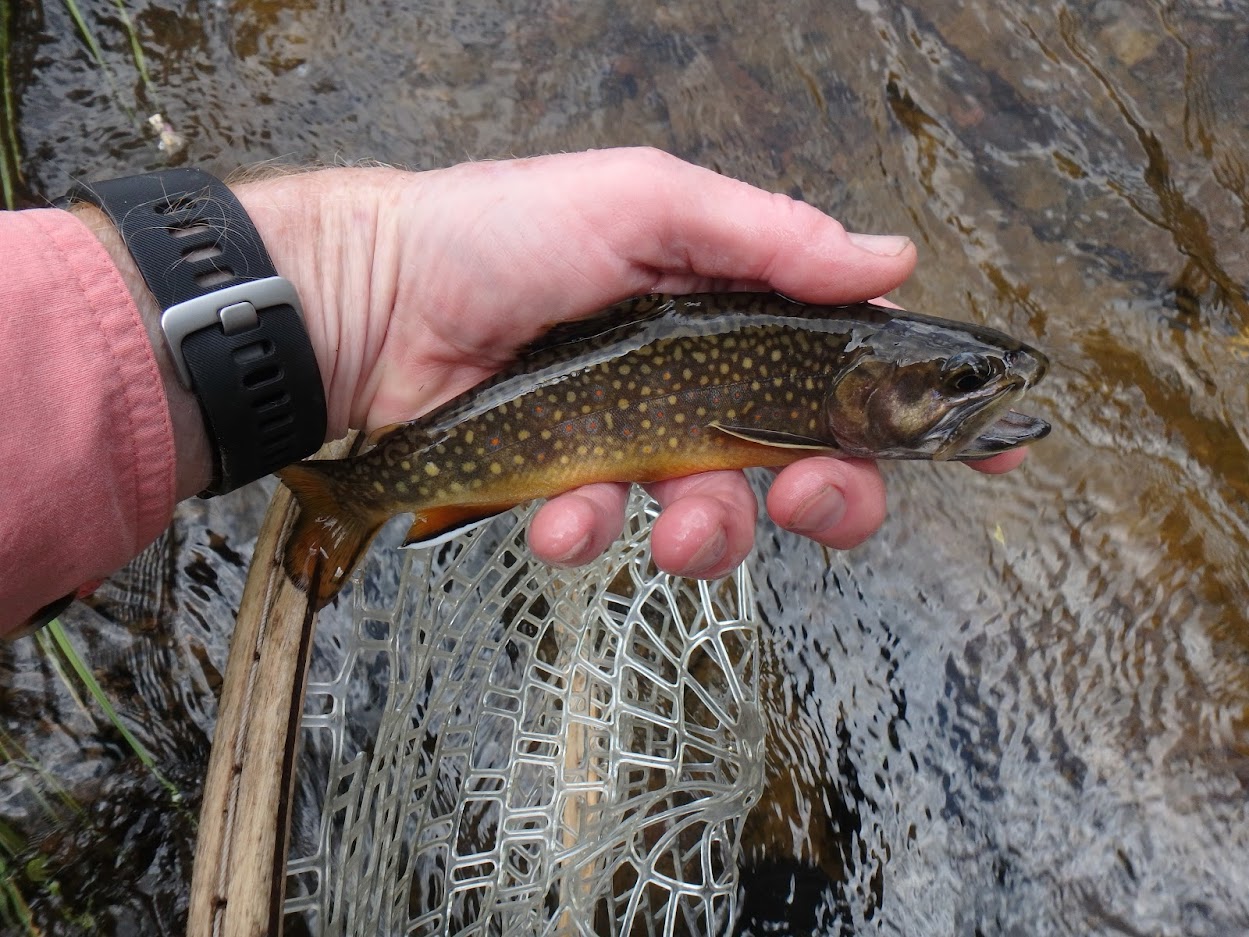 By three o’clock I was quite weary from the obstacle course session in the canyon, and the small brook trout failed to hold my attention, so I exited and returned to the car. After an auspicious start in the morning, the mountain creek disappointed me in the afternoon. I registered a grand slam, but this accomplishment does not compensate for the three hours of slow fishing in the early afternoon. I may return later in the season, when flows are reduced; however, the effort may not support the potential, and the return trip decision hinges on alternatives.