Location: Across from Cold Spring Campground

Jane and I spent Saturday on a nine mile hike starting from a trailhead on the Upper Taylor River near Dorchester Campground. We got to know our neighboring campers, TA and Scott, from Franktown, CO and Scott’s nephew Jody and fiancee Kristen. While we were hiking some strong winds gusted through the campground and picked up and moved our new canopy. When we returned we learned some kind souls had saved the canopy by staking it to some large rocks. We later discovered it was our neighbor from Texas, and we thanked him profusely.

On Sunday morning we had a great breakfast and then packed up everything and loaded the cars. Jane decided to drive back to Denver, and I elected to return to the lower Taylor River and do some more fishing. Sunday was warmer and brighter than Friday, so I was concerned that the fishing would not be as favorable. I drove down the road along the river to the paved pullout where I ended my fishing on Friday. I knew I could wade to the other side of the river and continue fishing upstream along the north bank. 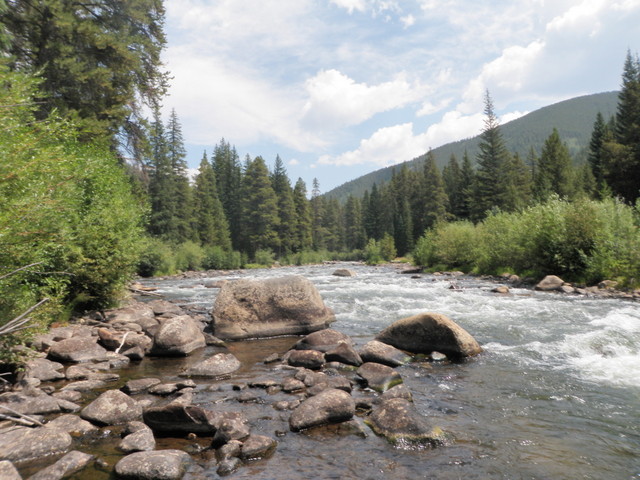 I decided to stay with what worked, and tied on a gray parachute hopper and added a beadhead hares ear on a 2.5 foot leader. I caught a small brown fairly quickly, but then covered a fair amount of water with no action. Meanwhile I began to notice a few size 16 mayflies, probably PMD’s, steadily ascending from the river. As I observed, the density of emergence increased and as a cloud moved in front of the sun and a breeze kicked up, I witnessed a decent hatch. Unfortunately the trout seemed to be ignoring this windfall of food. Or were they? Perhaps they were gorging on the nymphs beneath the surface?

I decided to add a beadhead pheasant tail to the hares ear nymph so I was fishing the parachute hopper with two trailing nymphs. I did this as I was positioned at the tail of a nice pool, and I fanned out a bunch of casts over the entire pool. Nothing. I moved on to less attractive water and did manage a couple momentary hook ups, and then in a deep narrow slot, a nice heavier fish hammered one of the nymphs. I played the fish for quite a while as it charged up and down the river, but just as I felt that I was gaining ground and tiring the fish, it made a quick turn and the fly popped out. Needless to say I was pretty disappointed with this turn of events.

I moved on fishing feverishly with my three fly combination as the mayflies continued to emerge, but no further action commenced. What was going on here? Maybe the fish were looking for nymphs deep in the water column? I clipped off all my flies and added a strike indicator and split shot and worked the beadhead hares ear and pheasant tail deep with lifting action at the tail of the drift. This didn’t change the lack of action one bit, and after fishing deep through some nice water, I swapped out the pheasant tail for a RS2, as I was also seeing some much smaller mayflies in the mix. This also had no impact on my success, and I was stuck on one small fish landed after an hour or so of fishing through the best PMD hatch I had ever witnessed on the Taylor River. I was beginning to evaluate an early departure for Denver.

At this point I decided to return to the hopper and beadhead hares ear that served me well on Friday and concentrate on working the edge of the river close to the cover of the bank. Surely I could pick up a few opportunistic fish using this strategy. Almost immediately I landed a tiny brown too small to count, but that was just a leading indicator of what lied ahead. Ironically as the visible mayflies died back, my fishing became more intense. In nearly every likely spot where I cast, I hooked and landed a fish. Most of the catches in the first half hour after my return to hopper/dropper fishing, roughly between 12:30 and 1:00, were on the beadhead hares ear. But as the afternoon progressed, I began removing the hopper from more fish mouths.

After passing through a narrow stretch where the water rushed down the center of the river with white water velocity, I reached an area where the river spread out over a wide stream bed. There was a small island and a channel of the river angled around the top of the island, then along the left bank, and rejoined the main river. The current in the channel ran directly into a high bank and then deflected back along the bank to the bottom of the island. This entire channel was no more than two feet deep, but mostly one foot and extremely clear. I positioned myself at the bottom of the island and despite my stealth, two or three small trout darted for cover. I shot a few casts to the area where the current hit the bank and received a refusal. I now felt that I wouldn’t catch any fish from this area due to the low water and extreme clarity. 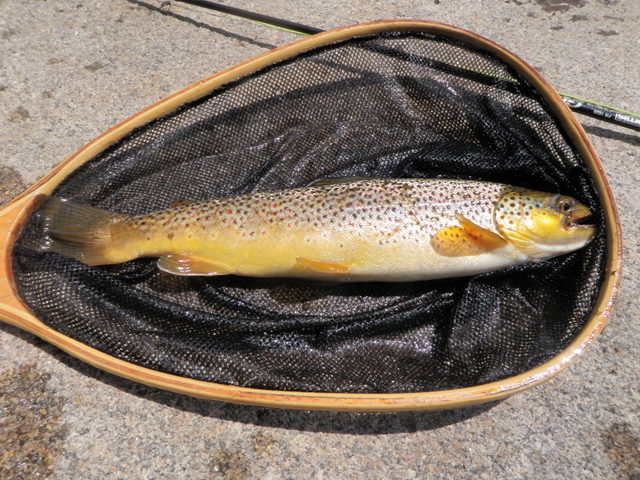 15″ Brown Was a Surprise

I decided to place a cast high in the run where it began to flow toward the bank where the water may have been two feet deep. I thought I could actually see the river bottom and there weren’t any fish. Well apparently my eyesight needs a check up because a nice brown materialized out of stream bottom and grabbed the trailing hares ear. Now the fight was on and as the fish thrashed about I could see it was a nice size. Eventually I slid my net under the bruiser and placed it on a large rock and it stretched from the tip of the net to the base, a distance of 15 inches. It was quite a thrill to see all this develop in such shallow water conditions. 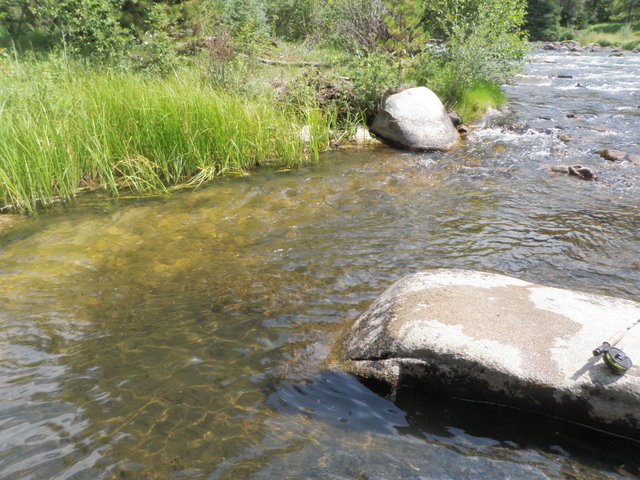 As it turned out this wide shallow section was very productive as the fish must have spread out to feed on the abundance of food. I picked up quite a few fish in the small pockets and runs in this area. As I moved up above the island along the left bank I approached another nice clear small pool that was probably five feet wide and ten feet long. I paused and surveyed the area and spotted a fish near the tail. I cautiously shot a cast short of the fish and then followed up with a cast virtually on top of the fish, but no response occurred. Next I decided to go for it and shot a cast so that the hopper landed several feet above the fish with the nymph even further upstream. Quickly I spotted a swirl to the hopper and set the hook, and another large brown rocketed to the right toward the middle of the river. As the fish moved broadside to my position I could see it was at least as big as the previous shallow water catch. Unfortunately the fish just kept running to my right into the heavy current and in an instant my line came flying back toward me minus two flies.

I replaced my parachute hopper with another one with a  hares ear gray body and continued working up the stream. In a narrow deep slot fifteen feet out from the bank, another nice fish smashed the hopper and this time the flies broke off on the hook set. I’ll attribute this to a bad knot. I searched and found my last parachute hopper in my front pack with a gray hares ear body and tied this one to my line. I had a few additional hoppers with a poly gray dubbed body, but amazingly the fish seemed to prefer the hares ear bodies.

By 3PM the action had slowed and I was considering wading across the river and packing it in for the day. But there was a huge pool with a long center current ahead, and it looked quite attractive, so I decided to give it a shot with my fish count at seventeen and hoping I could land three more for an even twenty on the day. I carefully worked the bottom of the pool with some long casts, but nothing showed interest. I thought it odd that not a single trout grabbed the trailing hares ear in such ideal conditions of moderate current and three to four feet of depth over a rocky bottom. If ever there were brown trout water, this was it.

When I reached the middle of the pool where the center current fanned out, I reeled up my line and noticed that the beadhead hares ear was missing. No wonder fish weren’t grabbing the trailer as I was confident they would. I tied on another hares ear and shot a cast up along the left side approximately four feet from the bank and eight feet from the strong center current. Wham! A fish rose and inhaled the hopper and a fight entailed. I worked the fish back and forth and eventually landed a nice chunky fourteen inch brown. I was worried about not having a nymph, and sure enough this guy went for the hopper. I landed one more smaller brown at the top of the run to reach 19, but I didn’t want to stray any further upstream, so I returned to the car and quit for the day at around 3:30. I tossed the flies in a few attractive spots along the south bank on my way back but nothing was doing. 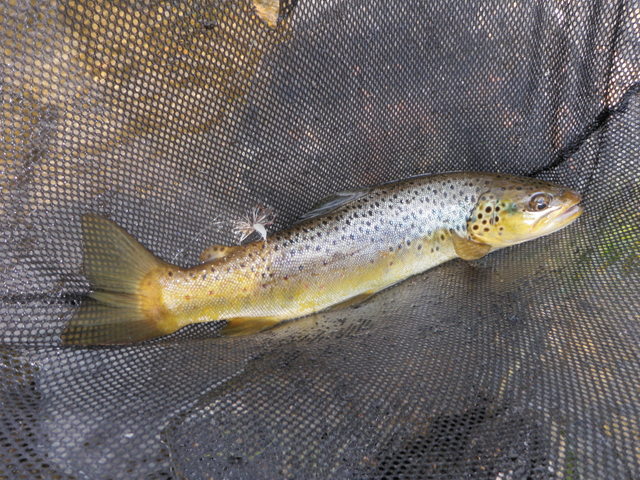 It was another fun day on the Taylor River and the reason I keep returning during the summer of 2012.