I picked up Danny at 7:30 on Thursday morning, and we were on our way for a two day and one night camping/fishing trip to the Taylor River. The Arkansas River received additional rain on Sunday night, and despite optimistic reports from the fly shops, I didn’t trust the conditions to provide a positive experience for Danny. The Taylor River is a bit further, but is a tailwater and thus presented a more reliable option. Flows were hovering around 400 cfs, and based on past experience, that is a bit high yet still comfortable for fishing.

We arrived at the Lottis Creek Campground by 11:30 and unloaded a few items to secure our site and then munched quick lunches and headed back to the river. I immediately targeted the section of the river above Lodgepole Campground, as I have enjoyed previous success there, and I knew lots of public water could accommodate two gung ho fishermen. It was quite cool with high temperatures in the 60’s and heavy clouds floated across the sky 60% of the time we were fishing. It was actually quite ideal weather for fishing and fish. 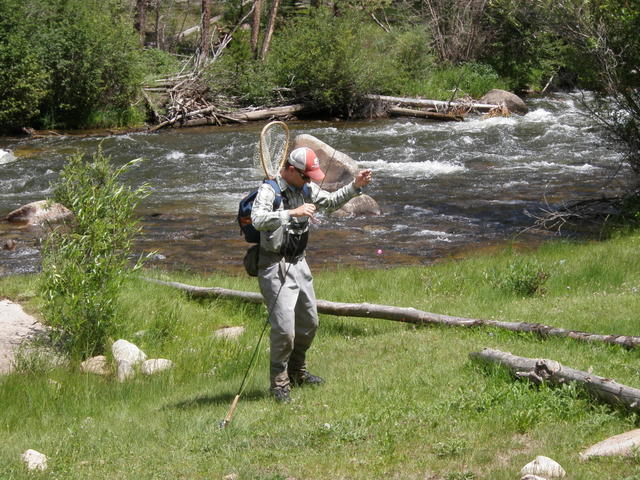 Danny Prepares His Line to Fish the Taylor River

As Danny and I began to fish in the pocket water next to the car, we immediately observed a fair number of green drakes followed by some pale morning duns, but these mayflies waned after an hour. I elected to begin fishing with a parachute green drake, and Danny opted for a nymph set up that included his newly tied tungsten red San Juan worms. I worked my way along the right bank with my green drake and landed four browns in the first hour including a 14 incher that I spotted just in front of a submerged rock. I returned to tell Danny the green drakes were producing and shared a parachute style and comparadun style with him.

We continued fishing along the bank that bordered the road until we reached a point where the river narrowed and crashed through a whitewater chute, and here we turned around and reversed our steps to the car. We both looked longingly at the opposite bank with full knowledge that it hadn’t been fished much since the inception of runoff. There was one wide riffle spot where a crossing might be possible, but four fishermen were positioned in this area, and it would not have been mannerly to cross while they were fishing. We quickly reversed course again and found another wide spot below a huge protruding boulder in the middle of the river. This ford seemed possible, although there was a fast deep run within ten feet of the north bank.

Since I’m here to write this blog, it is evident that we pulled off the crossing, although it happened with a few scary moments. As was the case with the fishing next to the road, Danny and I took turns leapfrogging around each other as we covered the best pockets and pools within 20-25 feet of the bank. I switched from the green drake to a parahopper with a beadhead hares ear and landed four small browns as we progressed upstream over the hour from 2PM to 3PM. At that time I switched the parahopper for a large yellow Charlie Boy hopper with long dangling rubber legs, but that fly did not last long before I exchanged it for a smaller Charlie Boy and added a salvation nymph below the beadhead hares ear. 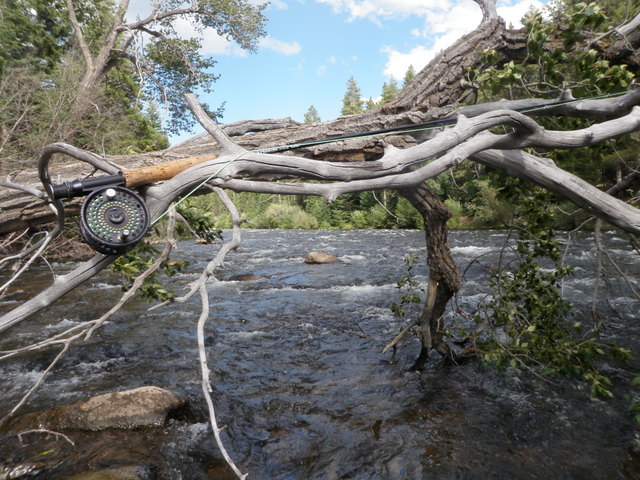 At 3PM I suddenly began to catch fish with increased regularity primarily on the salvation nymph and some of the brown trout extended into the 12-13 inch range. As the afternoon advanced it seemed that the fish got larger with numbers eighteen and nineteen falling in the 13-14 inch range, and for some reason the fish landed later in the day fell for the beadhead hares ear rather than the salvation nymph. 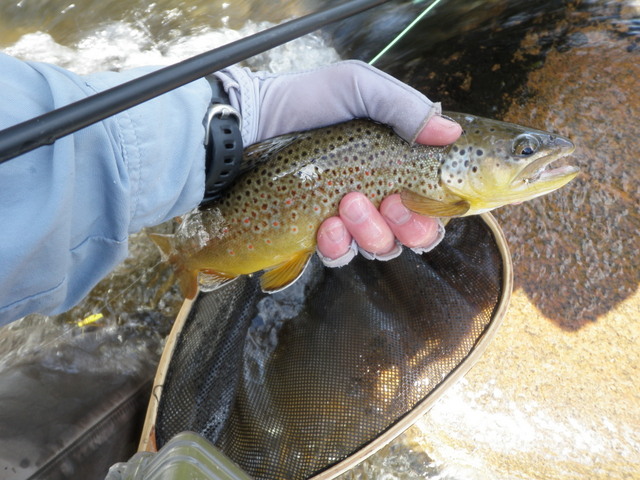 A Nice Brown from Thursday Afternoon

Near the end of our fishing I approached a nice deep run towards the middle of the river, and I positioned myself 10-15 feet to the left of it and one fourth of the way up from the tail. The current divided around a large boulder and created a thirty foot long slick that was only six feet across at its widest point. I began drifting my three fly combination starting toward the middle and covering the tail section, and I had the unique feeling of confidence that comes from many years of fly fishing and recognizing water that delivers on high expectations.

It wasn’t long before I saw a fish emerge from the cover of the faster deeper current seam, and I instinctively set the hook and felt myself attached to a gorgeous rainbow trout. The powerful pink-sided fish flashed up and down the narrow pool a few times, and I maintained solid pressure, but then it did an abrupt turn and streaked for the whitewater below. I tried to allow the line to slide through my hands and spin off the reel, but I failed and felt a knot in my stomach as the rainbow made another quick turn and snapped off the salvation nymph.

I paused for a moment to collect myself and then tied a new salvation to my line below the hares ear and resumed casting. I moved up the river a few steps and began prospecting the midsection of the narrow pool, and after a few casts, the hopper paused and dipped, and I once again set the hook and felt decent weight on the end of my line. By now, Danny had moved on to the bank and was just above me. I fought the bruiser back and forth and prevented it from charging into the fast water. I bought enough time for Danny to wade below me, and after I pressured the brown toward the bank, Danny scooped it into his large long-handled net. It was just in time as the fly fell from the seventeen inch brown’s lip just as Danny lifted it from the water. 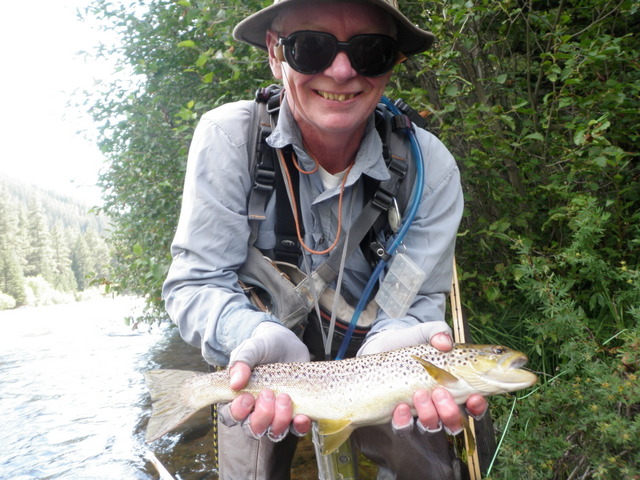 We paused to photograph the last and best fish of the day before tackling another adrenalin generating crossing. We had a fun afternoon of fishing and looked forward to a full day on the Taylor River on Friday.