Normally in August I begin visiting tailwaters in Colorado, because the freestone rivers and streams warm to temperatures that make fishing harmful to the trout, and even in the best case scenario the fishing slows down considerably during the middle part of the day. During 2019 the deep snowpack and late run off translated to higher flows and excellent water conditions in August; however, I decided to shift to my normal routine of favoring high elevation streams and tailwaters.

Jane was anxious to complete another camping adventure, while summer temperatures remained in the comfortable zone, so we selected a trip to the Taylor River tailwater during the week beginning on August 19. Jane loves the Taylor and Fryng Pan destinations, because they are close to the towns of Crested Butte and Basalt, and these small mountain resort villages provide alternatives for her, while I fish.

When Jane and I undertake our camping trips, she and I spend a couple days hiking or cycling, and I am allotted a day of fly fishing, while she pursues other areas of interest. During our trip to the Taylor River area, we completed a four mile hike in the Fossil Ridge area on Monday, since it was a short detour from our route over Monarch Pass. On Wednesday we back tracked a bit to Crested Butte and completed the Lower Loop mountain bike trail and followed that up with a tasty lunch at Teocalli Tamale.

As you probably surmised,Tuesday was my fly fishing day. It was a bright cloudless sky all day on August 20, and the air temperature rose to the upper seventies. Flows were 405 CFS, when I checked before our departure, but they seemed higher, when I was actually faced with wading and fishing the river. I checked the flows on the DWR site upon my return to Denver, and they did in fact remain in the 405 CFS range. I am convinced that I enjoy more success on the Taylor River, when I fish the bank opposite the road, but when I attempted to make the crossing on Tuesday morning, I completed 80% of the journey, before I was intimidated by the swift flows and returned to my starting point. I suspect age has added additional caution to my thought process, and that is probably a sensibility that I should appreciate. 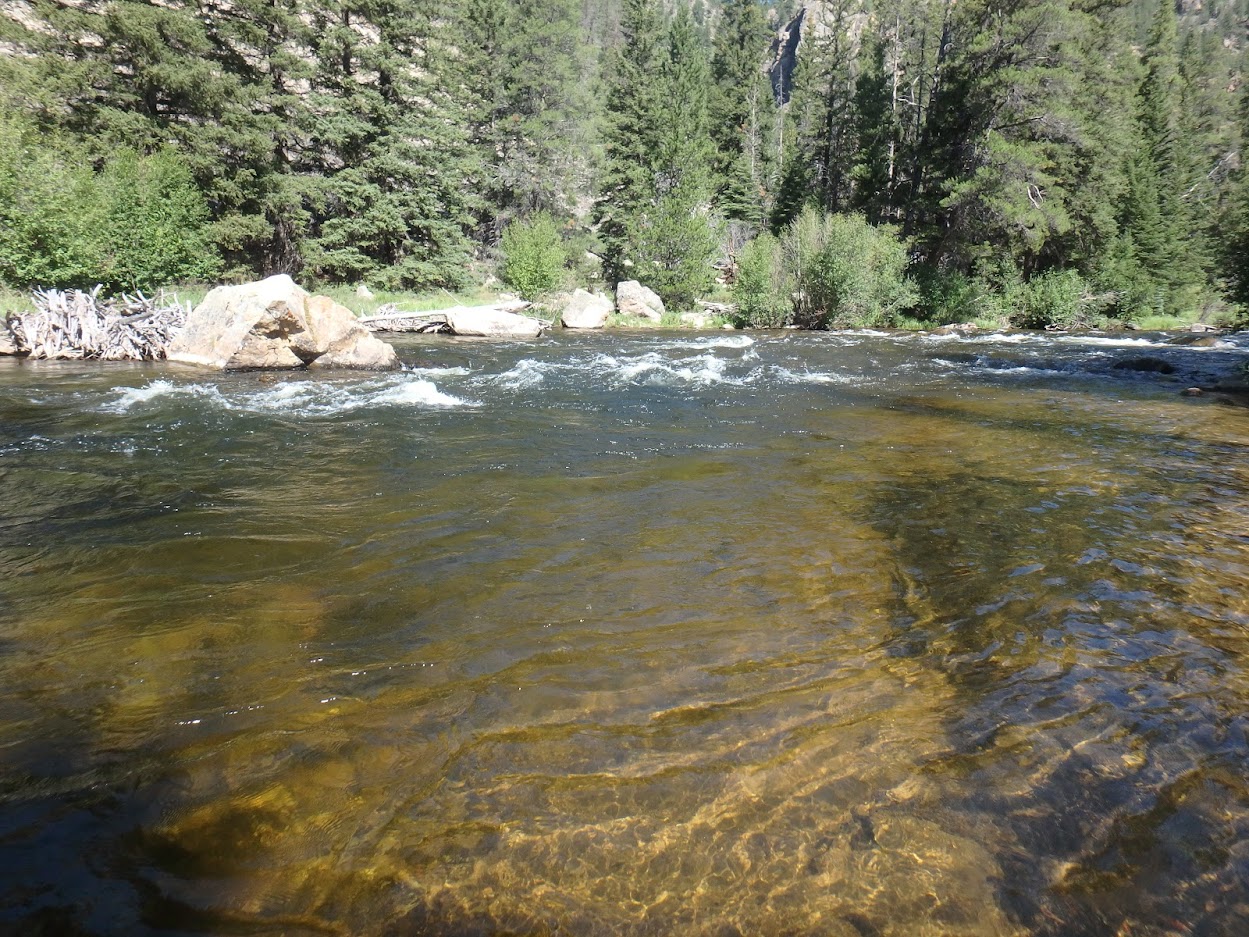 I began my day with a yellow fat Albert, prince nymph, and salvation nymph; and I fished for twenty minutes, before I finally landed a small brown trout. Red flags surfaced in my brain, but I convinced myself that the bottom release cold water made the river residents lethargic in the morning hours. I moved along quickly and covered a substantial amount of water, before I broke for lunch next to the car a bit after noon. 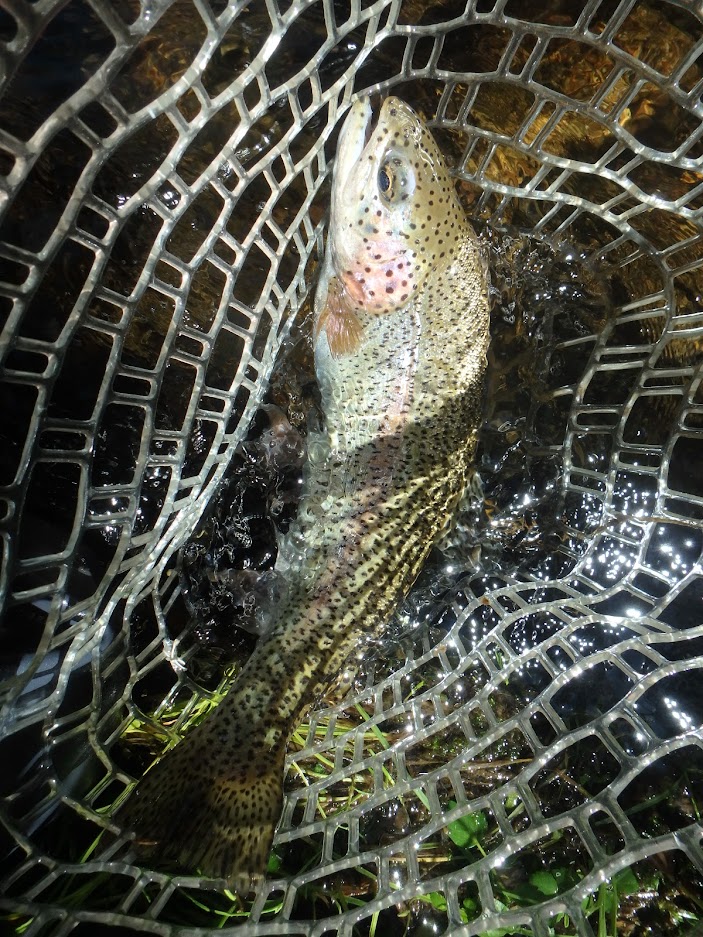 By this time the fish count was perched on four landed trout, and the tally included a chunky fifteen inch rainbow that proved to be the best fish of the day. During the morning I switched from the salvation to a hares ear and then an emerald caddis pupa. The prince nymph accounted for two brown trout, and the emerald caddis pupa registered the prize rainbow and another brown. 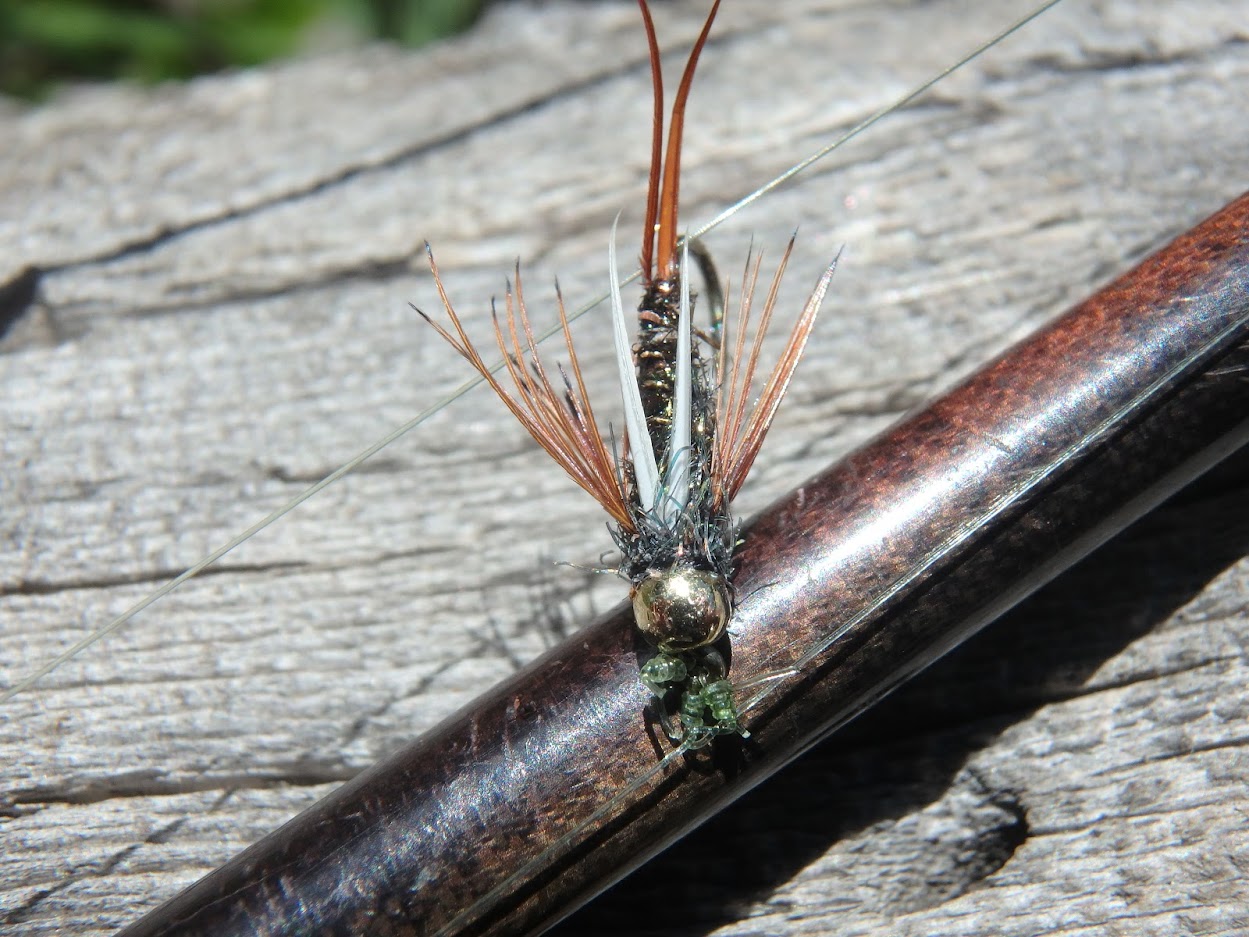 After lunch I decided to experiment with a green drake. This ploy paid major dividends on the Cache la Poudre River and South Boulder Creek, and I knew green drakes were present on the Taylor River. I began with a green drake user friendly, and the foam fly generated a quick pair of refusals, and then it induced an aggressive slam from a chunky twelve inch rainbow trout. In the process of releasing the rainbow, the user friendly stabbed the little finger on my right hand, and I paused on a tiny island to find a bandage in my backpack and applied it to stop the bleeding. It was another example of my inability to establish a nice rhythm on Tuesday. 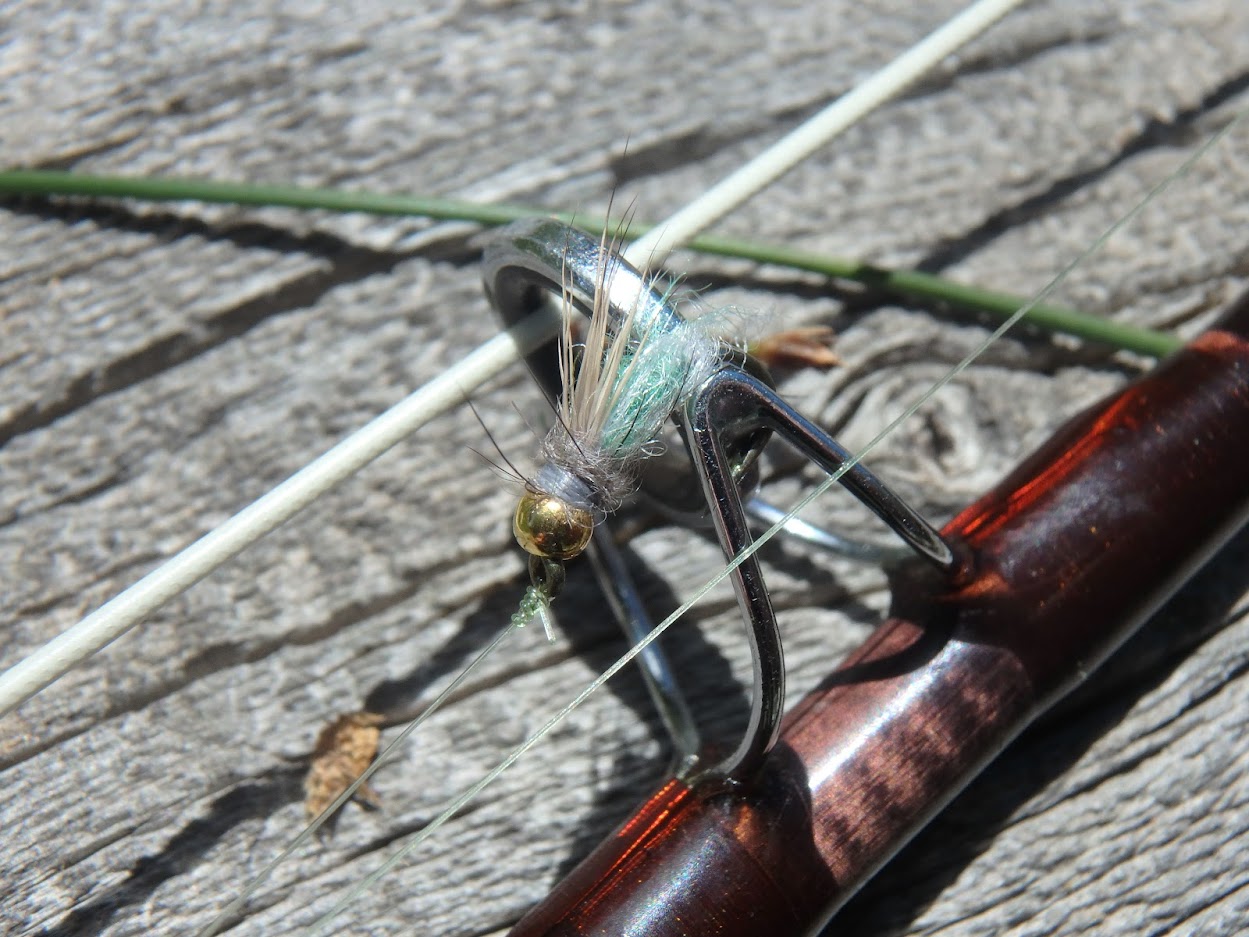 The salvation yielded three small brown trout between 12:30PM and 2:00PM. I moved upstream along the right bank and cherry-picked the obvious fish holding locales, but the catch rate was glacial, as the bright sun warmed the atmosphere, and insect activity was virtually nonexistent.

Between 2:00PM and 2:30PM I approached a very attractive long run and riffle, and I spotted a random rise. Almost simultaneously I saw the only natural green drake of the day, so I combined these factors and switched to a parachute green drake. My thinking was sound, but the parachute mayfly was rudely ignored, and this prompted me to try a size 14 yellow stimulator, since I observed a couple yellow sallies earlier. Again the fish treated my fly with disdain. At 2:30PM my confidence was at a low ebb, and I was bored, so I exited the river and returned to the car.

Tuesday on the Taylor River proved to be a challenging day. It would be easy to blame my mediocre success on my inability to cross the river; but in reality the bright sun, warm temperatures, and lack of available food organisms were probably the true reasons. I did manage to land a quality rainbow trout, and a second rainbow ripped off thirty yards of line, before it shed the hook, as I ineffectively scrambled to follow it down the river. The other seven fish were smallish browns with one or two extending to eleven or twelve inches. I experienced too many quality outings on the Taylor to rule it out after one off day, and I will surely return at some future date.