Location: Across from Lodgepole Campground upstream to large boulder in wide area

Friday morning wasn’t quite as chilly as Thursday at my campsite at Lottis Creek, although the tent and tablecloth were covered with rain from the brief shower that took place at dark on Thursday night. I fired up the propane stove and made a cup of tea and ate my minimal breakfast. I was waiting for the sun to rise above the hill to the east so the tent would dry before I packed it up since I needed to be out of site number 8 by 11AM, and I planned to fish another day before returning to Denver.

I busied myself with packing the car with the storage bins and rolling up my sleeping pad and sleeping bag. Eventually I removed the rain fly and draped it over a picnic table at an unused site two down from mine, and then I removed the tent pad and draped it over the table one site over as it was also unoccupied. Finally I tipped the tent up on its side to encourage the bottom to dry. The sun appeared partially over the hill by 8:30, but there were quite a few clouds in the sky, and that prevented the intense drying rays I was hoping for. There was a light breeze however and that aided the evaporation.

As I waited for the drying process to take place, I removed all my fly storage boxes from my fishing bag and sorted through them looking for large caddis, as I planned to try fishing caddis dries along the north bank like my friend from Ohio had been doing on Thursday. I did some fundamental fly organizing and when I’d completed this task checked the tent paraphenalia covering three campsites. Fortunately the breeze and sun were working their magic, and I was able to pack up the dry tent and left the campground by 10AM.

I planned to drive down the road to Lodgepole Campground and park at the nice paved lot across the street. I was concerned that this was in the construction zone, and I’d need to wait for flagmen to let me through, but as it turned out Lodgepole was just east of the start of the construction zone. I actually parked upstream from the Lodgepole lot in a nice pullout adjacent to where the river spread out into a wide shallow riffle. I planned to ford the river at this point and walk down the north bank to a spot across from the Lodgepole lot. I felt that the fish on the north bank were not as pressured as it took quite a bit more effort to get there.

Everything worked according to plan and I found myself next to the river by a large rock moraine with my Loomis five weight strung and ready to fish by 10:30AM. As it turned out, another gentleman was directly across from me wading wet and fishing up along the south shore. The river between us was quite swift and noisy, so I didn’t feel that my presence would affect his fishing.

My first fly choice was a large royal stimulator. It worked in the hog trough so why not here? That was my thought process. I cast the stimulator repeatedly in the nice deep V-shaped pool behind a mid-stream rock, but nothing showed interest. I could see a nice brown hugging the light sand bottom, but the fish was showing no interest. I clipped off the royal stimmy and tied on a deer hair caddis with a palmered body. This also was ignored by the elusive fish of the Taylor River. I decided to forsake the pool and moved upstream along the bank and ten to twenty yards above my opposite bank companion.

After casting to another sweet slack water area below a log with no results, I decided to go back to a proven producer and tied on the bushy purchased green drake. In a short deep pocket just above the log, a nice brown darted to the surface and inhaled my green drake. Why do I always over analyze? I continued and covered a fair number of attractive runs and pockets with no results before landing a second fish, a rainbow, on the green drake. Fortunately the green drake seemed to be more buoyant on Friday than Thursday and wasn’t requiring the frequent drying stops. 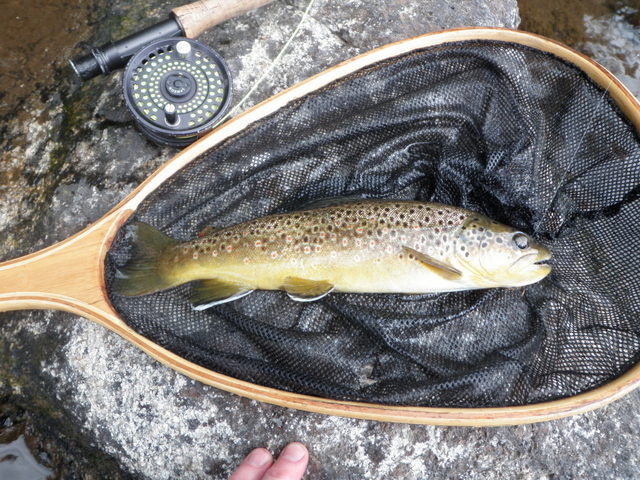 It was turning out to be a beautiful day for fishing with cool air temperatures and partly cloudy skies. The clouds were large and gray but quite high in the sky so they didn’t appear to threaten any heavy precipitation, but did create a nice overcast. Once again I seemed to be covering quite a bit territory between fish and by 1PM I remember thinking that I’d caught seven fish in 2.5 hours, and my catch rate was slightly above the two fish per hour norm. With this thought in mind and no green drakes observed, I decided to make a strategy shift.

I clipped off the green drake and tied on a gray parachute hopper size 10 and then attached a two foot dropper to the bend and added a beadhead hares ear. I was fishing near the bank so perhaps the trout were tuned into hoppers, and shouldn’t the all purpose hares ear attract fish subsurface? At the rate I was catching fish I estimated I’d end the day with twelve or so and that would be a nice accomplishment on top of the sixteen of Thursday.

Amazingly the strategy worked to perfection. Initially I began to catch browns on the trailing beadhead hares ear and fish were attacking the nymph in most of the places where I expected fish to be. I got in a nice rhythmn and moved along at a decent pace placing two to five drifts in all the likely spots, and more times than not a fish would grab the trailing nymph. Meanwhile the clouds were getting thicker and the periods of sun less frequent and eventually I could hear distant thunder. However I was largely oblivious and as a half hour or so flew by, the fish began to hammer the parachute hopper. This was even more fun catching fish on the top dry fly. I spotted a few PMD’s and considered switching the BHHE for a beadhead pheasant tail, but decided to stay with what was working until the success ended. 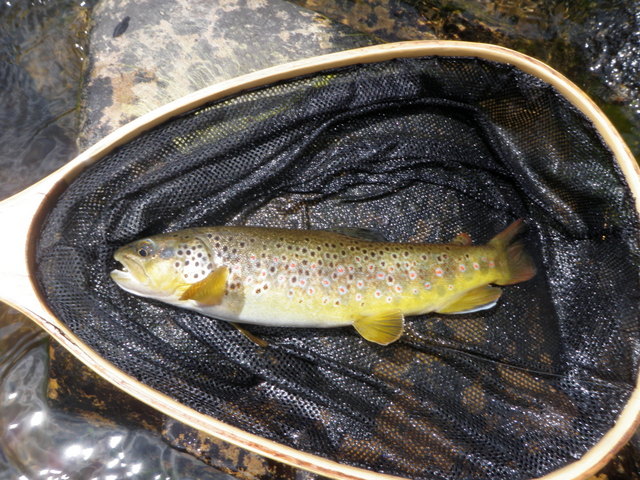 One detail I forgot to mention is that shortly after landing the first brown on a green drake, I snagged my net on a tree branch and as I took another step I snapped off the retractor cable. I couldn’t decide how to attach my net without my trusty retractor, but I eventually decided to stuff it handle first behind my back so it was pinched between my backpack and back as I was wearing a raincoat. This worked reasonably well, but I had to focus every time I landed a fish not to drop the net as I usually do when the retractor pulls it back into its proper position.

Well I was rolling along augmenting my fish count nicely when I hooked a twelve to thirteen inch brown in a very shallow riffle. I was very surprised at the non-descript lie that produced the fish, but as I raised my rod to net the fish it wiggled free. I no longer needed the net so I unconsciously dropped it. Instantly I realized the error of my ways as the net began drifting downstream away from me so I tried to stretch down to retrieve it, but it was already out of reach. I was now in panic mode and I took a step downstream and lunged for it. I successfully grabbed the net, but it was as my body began a downward trajectory, and I hit the water with my left side and temporarily went under and water trickled over the top of my waders and filled my left leg and foot. I also tangled my line in a dead overhead branch during this ridiculous process.

I climbed up on shore with my prize net still in my hand and managed to break off the dead branch and untangle my line. I was across the river from my car, but didn’t want to waste time wading back across, so I decided to suck it up and continue. My shirt, undershirt and underwear were all wet and water was sloshing around in my feet. Eventually the water inside my waders warmed up but the cotton undershirt and underwear continued to be cold and clammy particularly as the rain clouds continued to build. The best medicine for my condition was to continue catching trout, and that’s exactly how I got well. 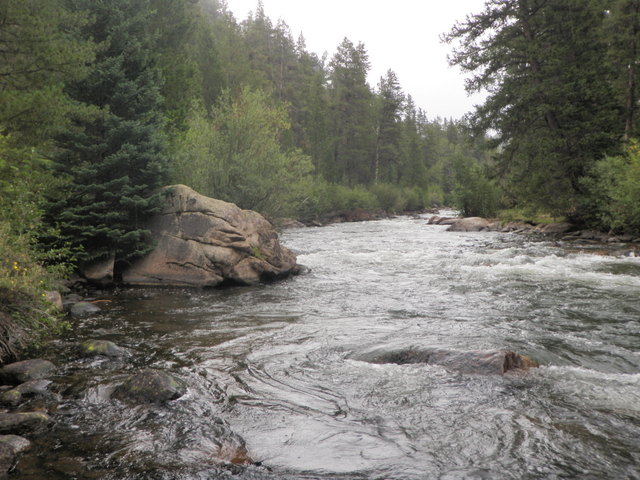 Nice Brown Came From Eddy Next to Large Rock

I continued probing the pockets and runs with my hopper/dropper combination and landed more fish. By three o’clock the storm moved in and light rain began to fall. I was prepared with my raincoat already on, but my wet undergarments were causing me to feel quite chilled. I had reached twenty-four landed fish, and I was trying to make it 25, but I was moving further away from my crossing point and feeling chilled so I decided to wade back and return to the car. It proved to be a great decision as the rain began to descend in sheets as I unlocked the car and changed under the dripping hatchback door. I had clean dry clothes in my sack from camping, so eventually I was in the dry heated comfort of my car driving back to Denver. An energy drink and snack later, I was back in a pleasant state remembering my fine day on the Taylor River.