Tuesday, July 21, 2020 developed into a nice day along the Taylor River, as it was actually fairly cool with long periods of dense cloud cover. The high temperature probably peaked in the upper seventies, and flows were in the 300 CFS range. I arrived at a wide pullout next to the river by 9:15AM and started fishing by 10:30AM. I assembled my Sage One five weight and methodically moved through my preparation routine, as I planned to cross to the opposite bank and be away from the car for the remainder of the day. I was quite pleased, when I was able to realize my goal of crossing, and the last ten percent was the most difficult, as I tested every foot placement and leaned heavily on my wading staff. 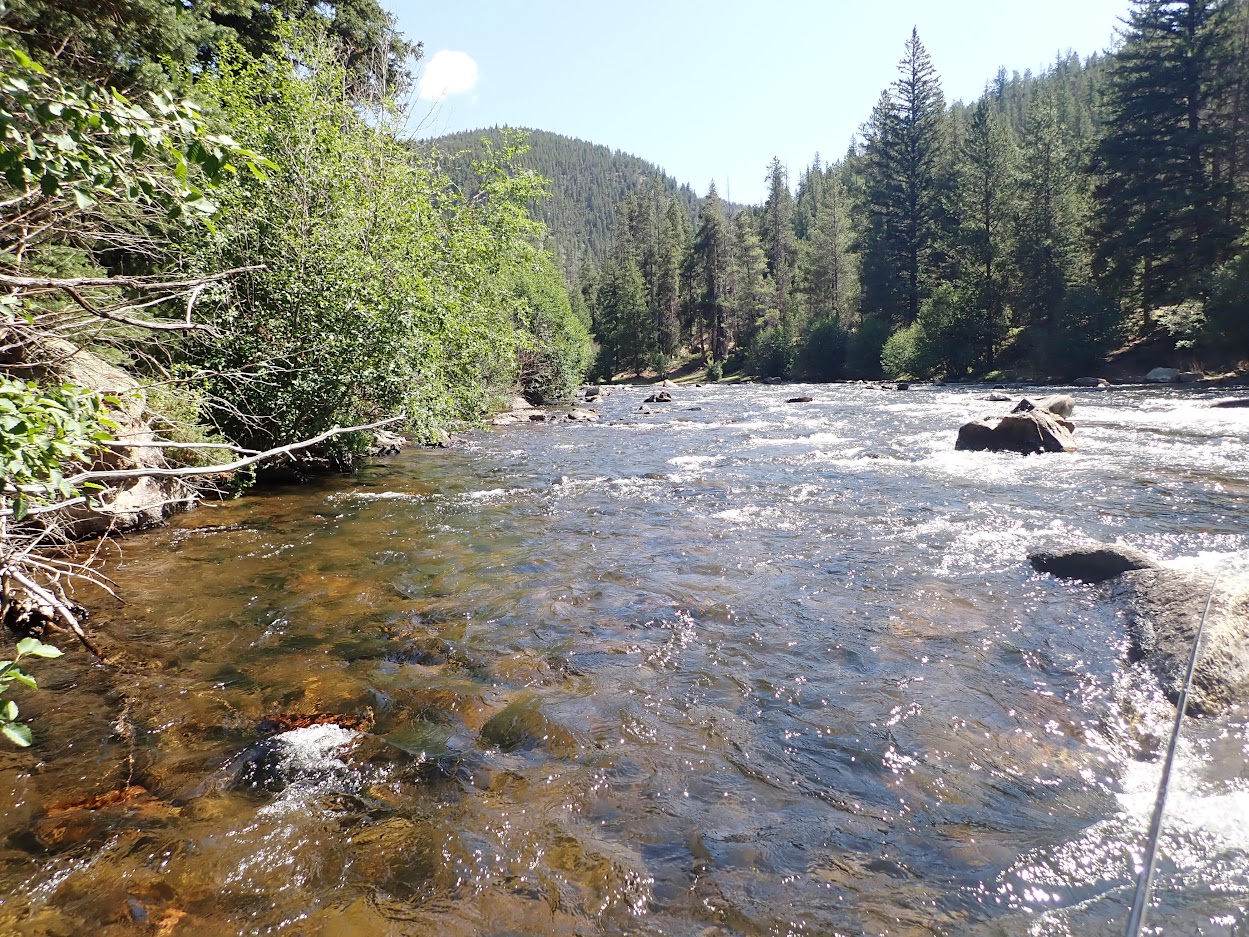 Once I climbed the bank opposite the road, I chose a path through the forest, until I was downstream at my chosen starting point. I rigged with a tan ice dub chubby Chernobyl, 20 incher, and salvation nymph. After thirty minutes of unproductive fly fishing, I reconfigured with a size 12 prince nymph and hares ear. These flies were equally unimpressive, and I sat down in a grassy area next to a gorgeous pool to consume my lunch at 11:45AM. I did hook a very nice rainbow in the lunch pool on the hares ear, but after a twenty foot streak, it shed the fly. 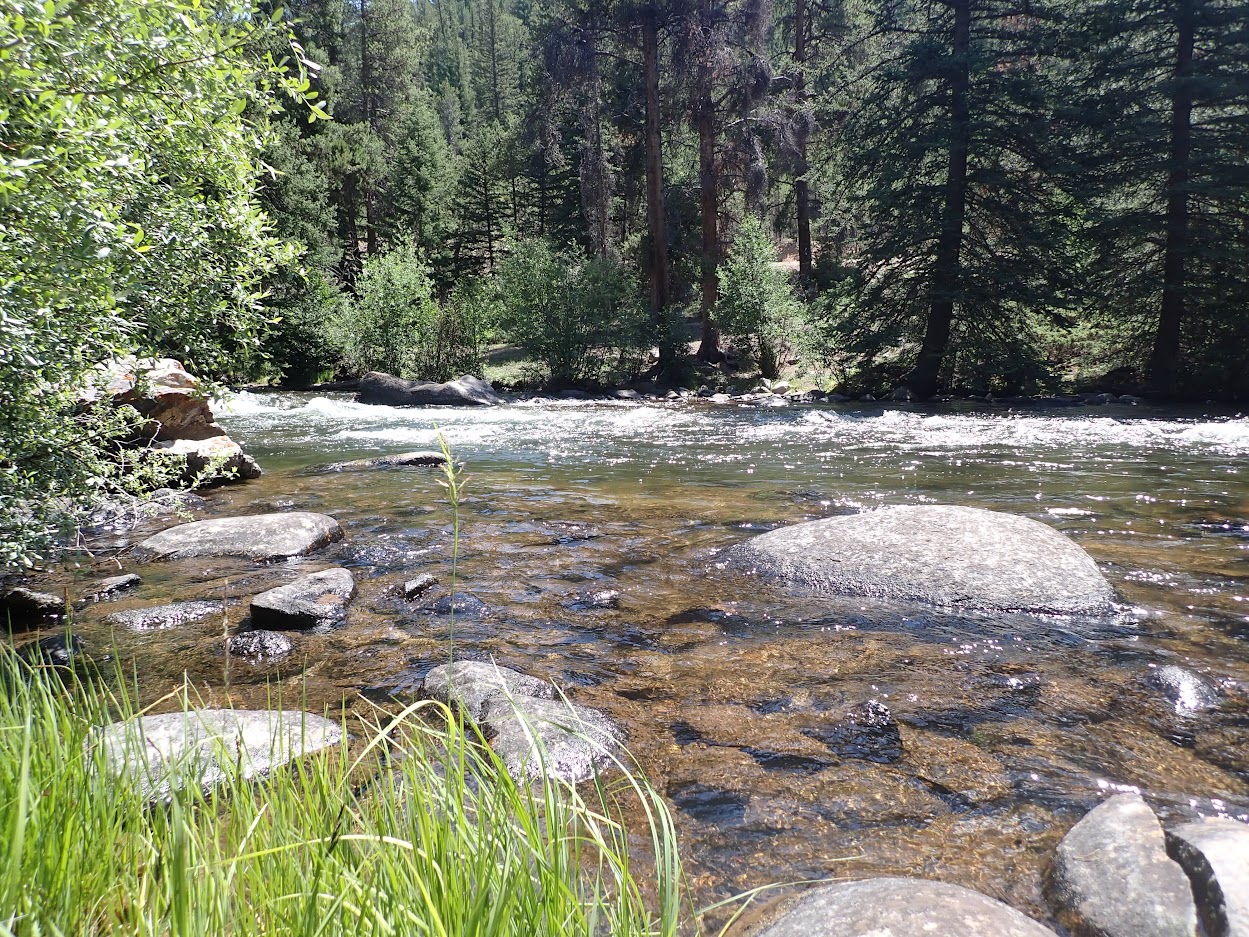 i observed the pool during my lunch break and spotted two green drakes and five pale morning duns. After lunch I decided to hedge my position, and I replaced the chubby Chernobyl with a size 12 peacock hippie stomper. For droppers I stayed with the prince, but I replaced the hares ear with an ancient cranefly larva. It was simply a hunch. The hippie stomper generated a pair of refusals, but the nymphs were ignored. A swarm of caddis on the streamside bushes prompted me to remove the larva, and I replaced it with an emerald caddis pupa. None of these well conceived moves broke the zero fish logjam, so in a final fit of frustration with my inability to land a fish, I made a total commitment to the green drake. A series of very attractive riffles of moderate depth suggested a perfect trial situation for the olive-hued mayfly. 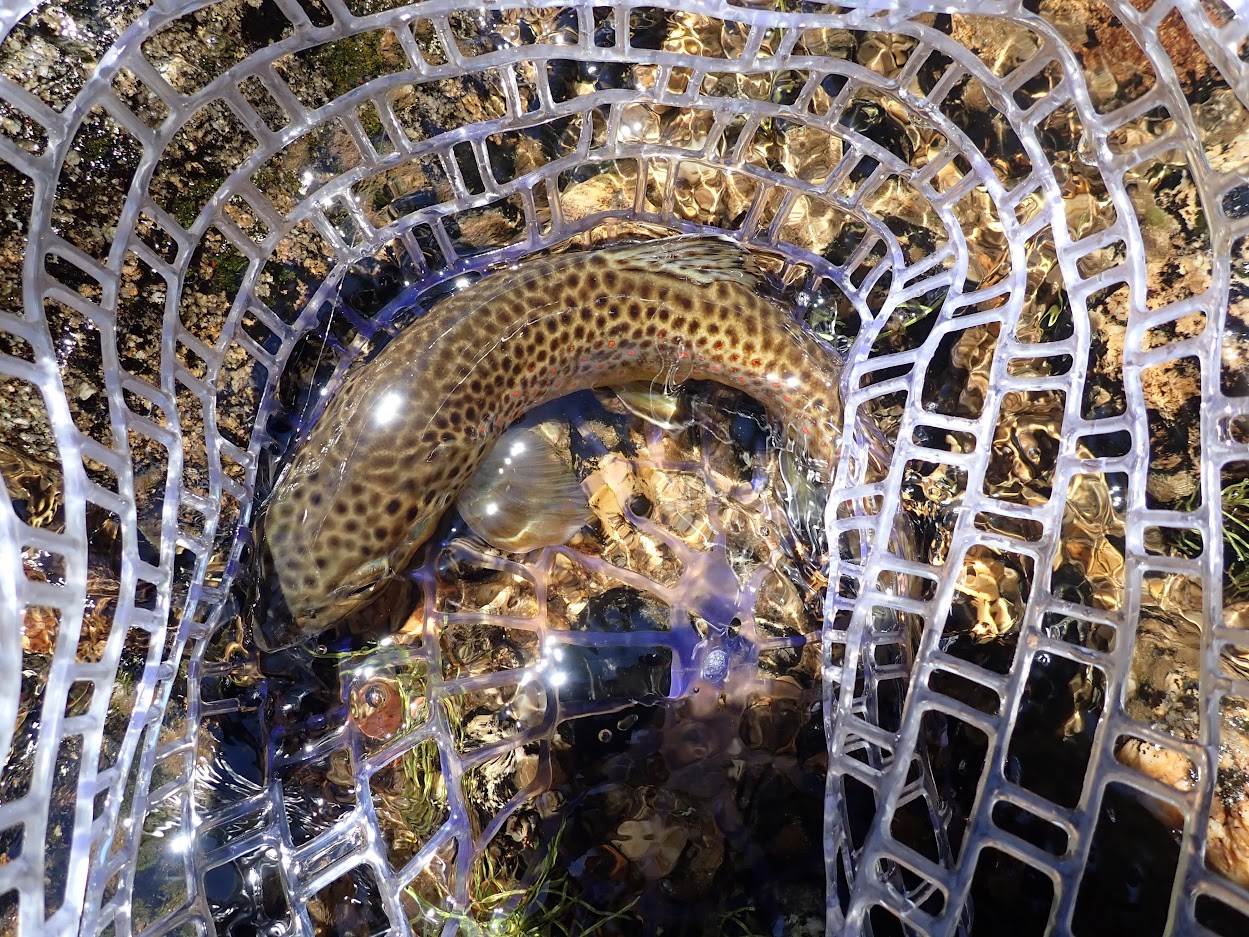 Finally my intuition paid off, and I landed an eleven inch brown trout that slurped the parachute green drake imitation. The remainder of the afternoon was a Taylor River trout feast. I prospected my way along the left (north) bank and methodically picked up twenty-four additional trout. All but four were brown trout including four in the twelve to thirteen inch range. Of course quite a few browns also measured in the seven to eleven inch slot. The minority population of rainbows were well represented and included sixteen and fifteen inch slabs. 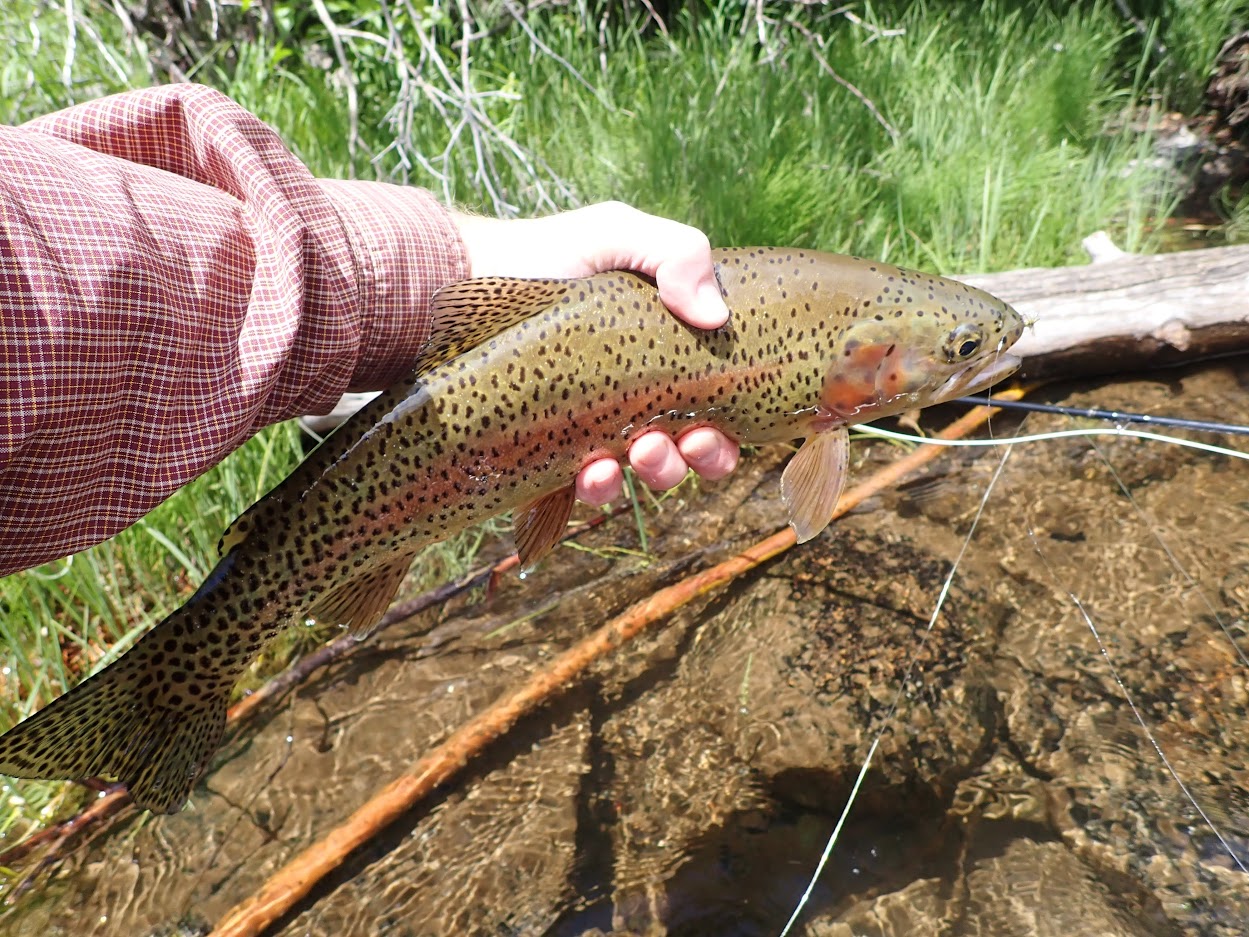 The catch rate seemed to accelerate around 1:30PM and remained fairly intense until 4PM. A couple was sitting on a log eating lunch, as I fished upstream a bit from the Santa Fe. I performed a nice show, as they watched, and I landed two medium sized browns, but the highlight and crowd pleaser was a sixteen inch rainbow. As I continued above them, another fisherman arrived, and he chatted with the couple and watched me intently. As he looked on, I suffered through four long distance releases. Two of the releases catapulted my flies into the trees, as the coiled energy of the bent rod was suddenly released. I am sure my fans were jealous of my action but thankful to not be part of the associated woes. The angler who joined the couple simply shook his head in sympathy, when I looked back at him. I managed to recover the first set of flies that lodged in a tree; but I battled, broke and crushed quite a few dead branches in the process. Of course that episode was also part of the price of admission. 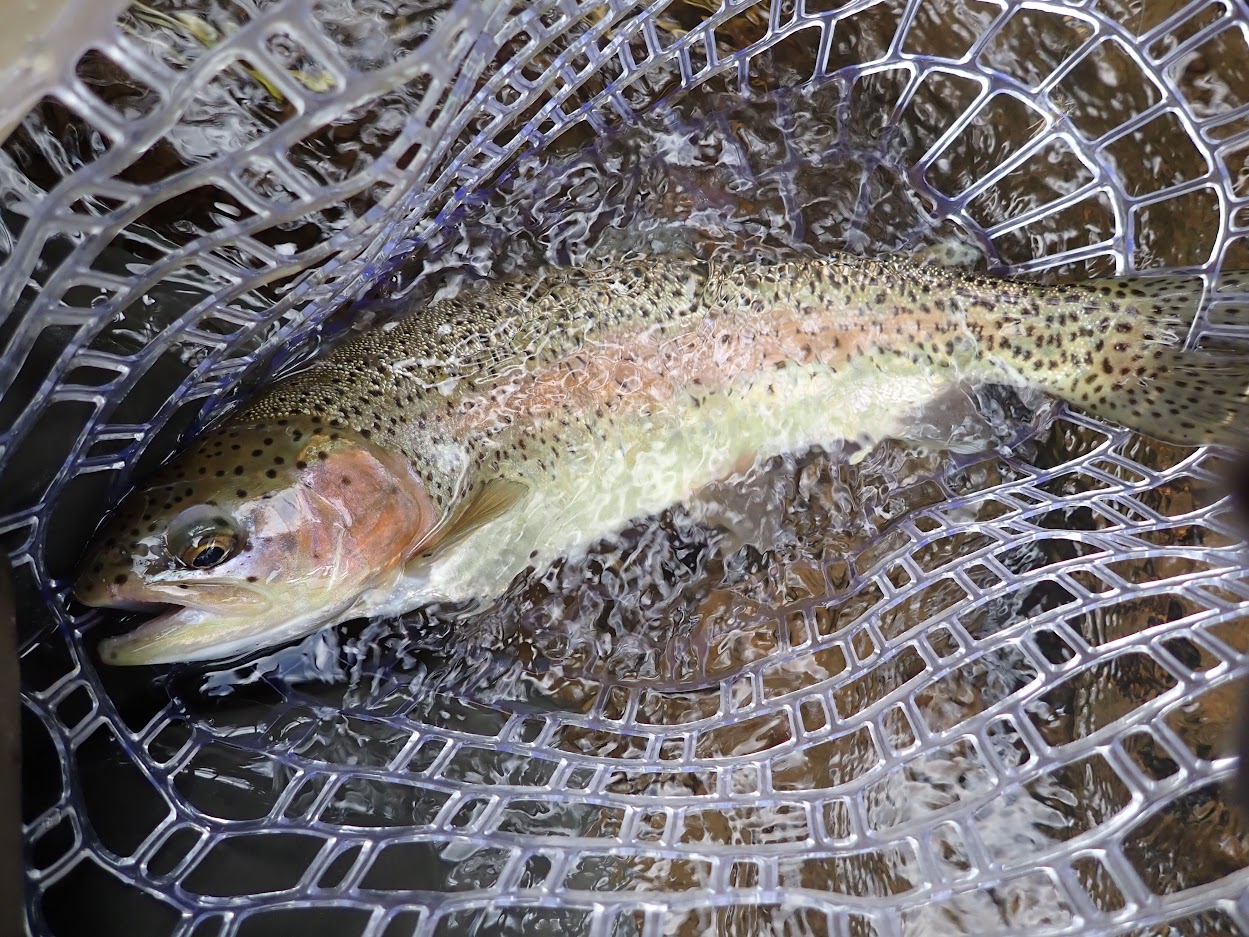 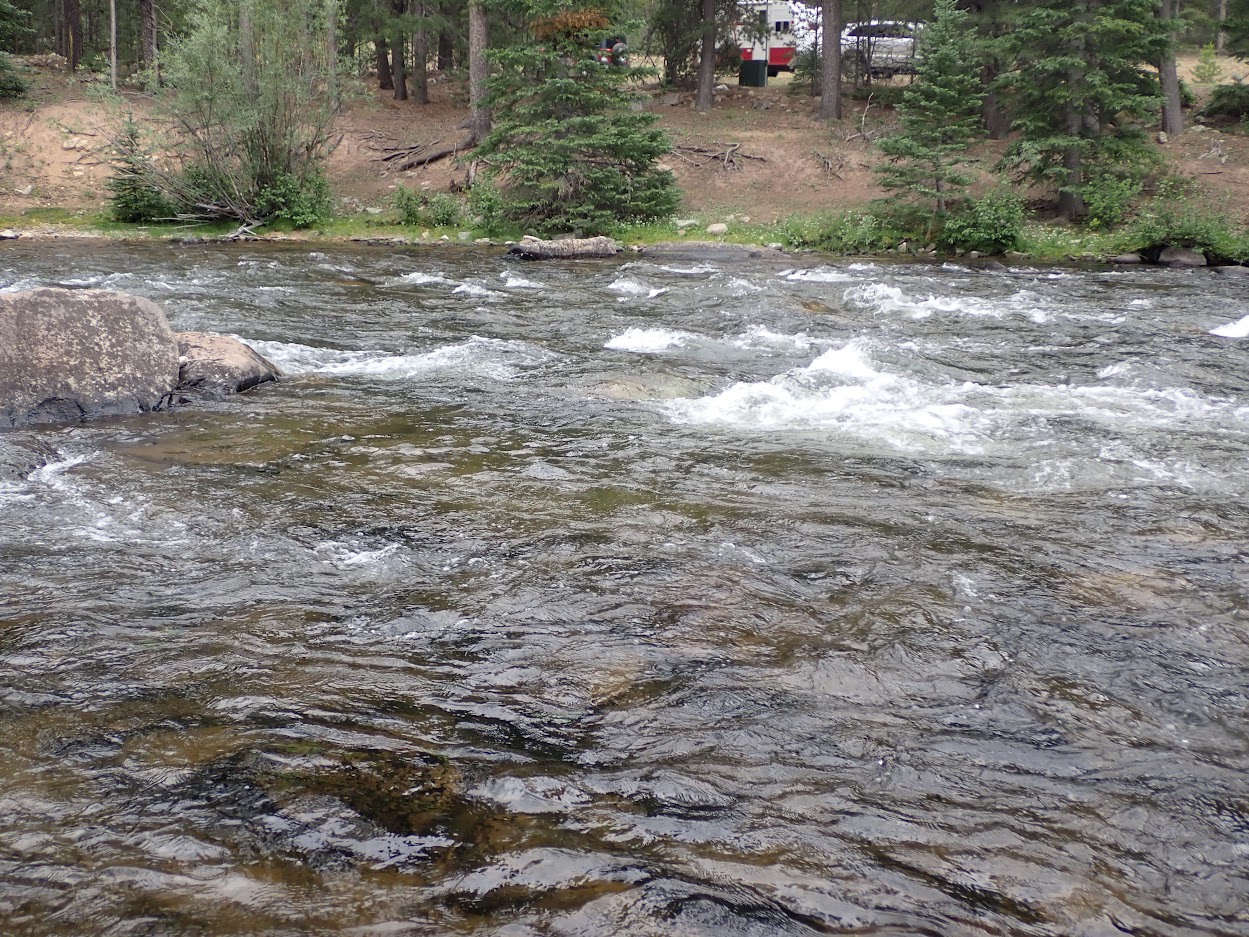 Slick Behind the Exposed Rock Delivered the Rainbow

I would be remiss, if I did not mention that I added a size 14 yellow/orange stimulator to the green drake and fished a double dry for much of the afternoon. The green drake dominated the action, but the stimulator aided significantly in tracking the green drake and produced eight of the twenty-five landed trout. I added a stimulator as the top fly, after I spotted a pair of yellow sallies in the atmosphere above the river. The double dry ploy that I copied from my Cutthroat Anglers guide is becoming an increasingly important element of my fly fishing arsenal.

After two parachute green drakes migrated to the damaged and unraveling space in my fleece wallet, I experimented with a user friendly green drake, and the foam backed imitation once again impressed. The fifteen inch rainbow was among the user friendly fans.

On Tuesday, July 21, I discovered that I do not need to rush to fish the Taylor River. A noon or one o’clock arrival would be sufficient. Once the water warmed up, and I attached a green drake to my line, a very satisfactory day of fly fishing unfolded. My ongoing quest for green drakes was successful, and I logged three hours of fast paced action. Showing off to spectators was an unexpected bonus.