Location: .5 mile downstream from the confluence with Lottis Creek.

I love camping on Fathers’ Day, but I do not relish the difficulty in obtaining a campsite for the popular outdoor weekend in Colorado. Since Jane and I are retired, we devised a strategy to counter the weekend crowds and still fulfill my desire to camp and fish on June 19. I continued to monitor the flows on Colorado rivers, and I was attracted to the Taylor River below Taylor Park Reservoir which registered 325 cfs. I recalled fishing this gorgeous tailwater near the end of July and early August at 400 cfs, so I was certain that the flows documented on the DWR web site were manageable. 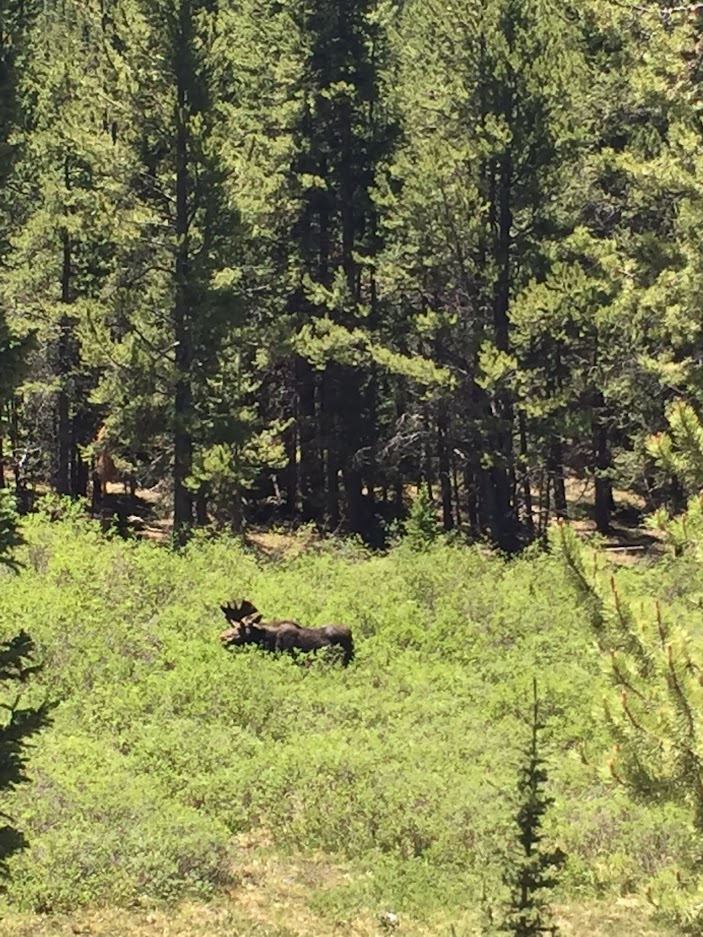 Jane and I initiated our plan by packing the car with most of our camping, hiking, biking and fishing gear on Saturday, and we departed Denver by 9:30 on Sunday morning. We banked on the weekend campers departing on Sunday to return to their workplaces by Monday morning, and we were mostly accurate in our assessment. Since half of Sunday was spent driving, and I desired a full day of fishing, we headed directly to Crested Butte for some mountain biking. A highlight of our journey was sighting a large bull moose browsing in the willows four miles below the summit of Cottonwood Pass. I continue to be amazed by the size of these majestic creatures. The ability to hold their heads up while supporting massive antlers is also an admirable feat, and I am always surprised by the dark brown almost black color of their coats. 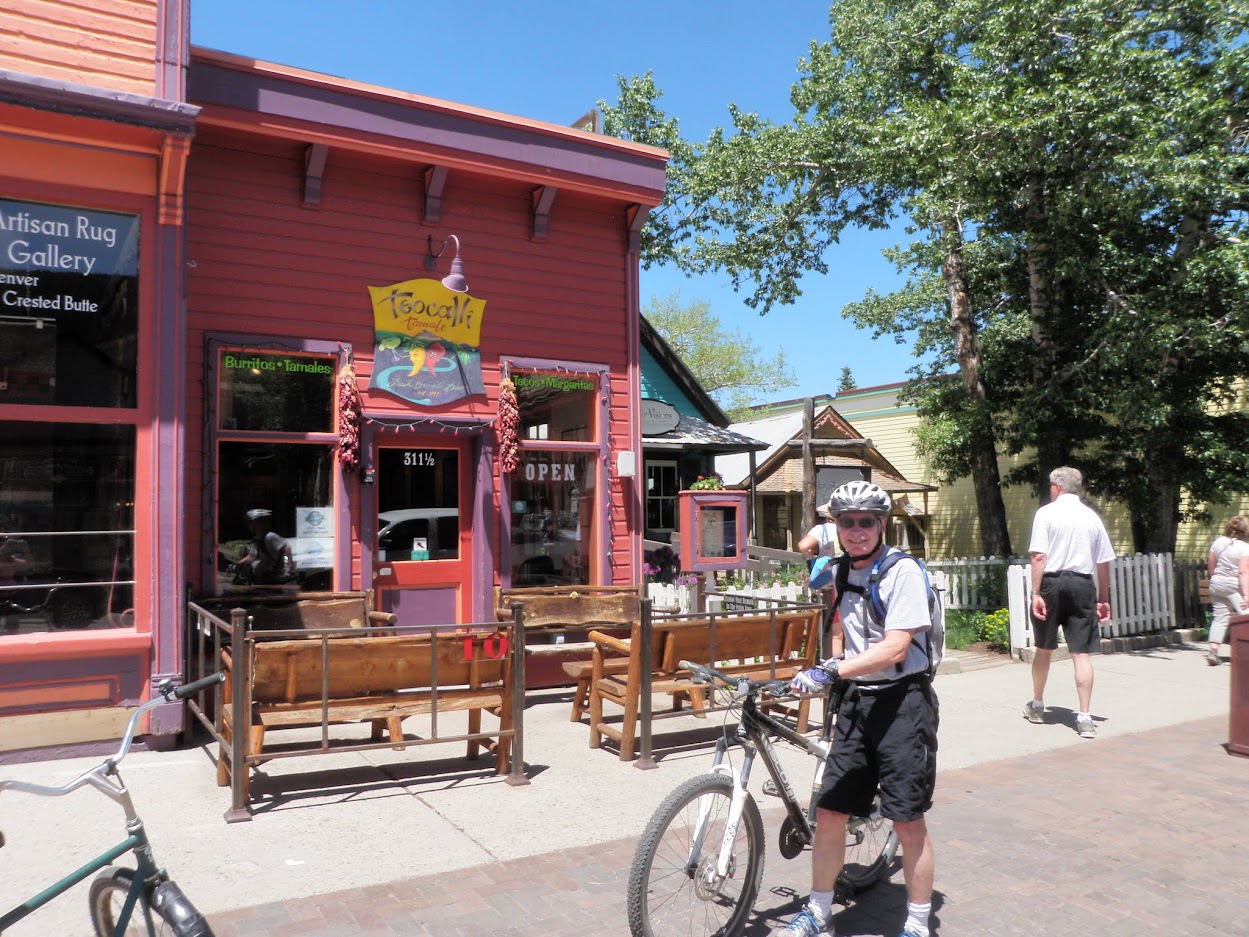 Upon our arrival in the town of Crested Butte we drove down Elk Avenue, parked and marched directly to Teocalli Tamale, where we each devoured two examples of the namesake menu item. An elk sighting and Teocalli tamales had my Fathers’ Day off to an auspicious start. After lunch we parked at the end of Elk Avenue and lowered our mountain bikes to the pavement to begin our ride. The Lower Loop trail was even more fun than we remembered from our visit just before Labor Day weekend in 2015. The trail consisted of paved road, dirt road and single track, but the difficultly level was easy to moderate, and that suited us sixty year olds perfectly. 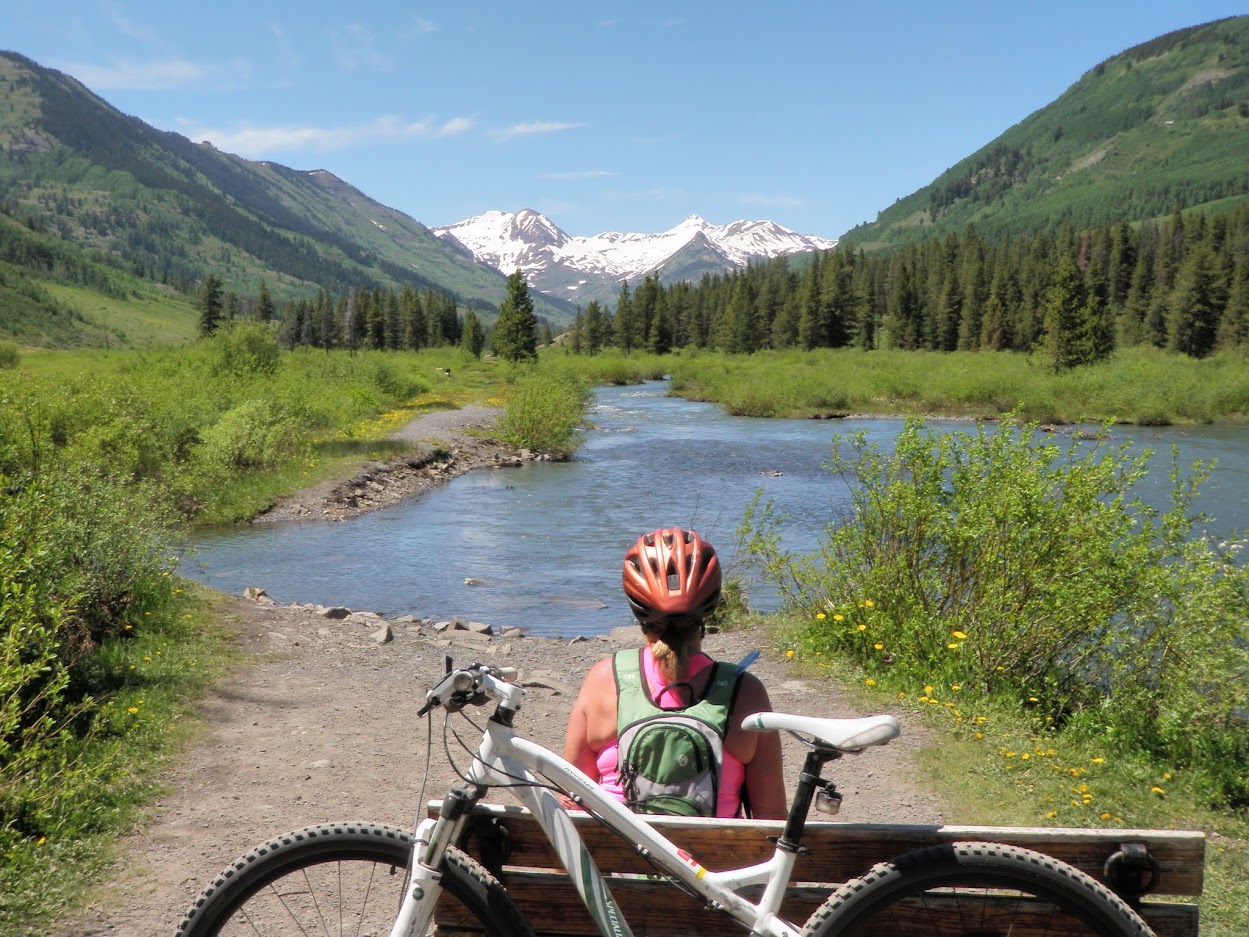 After completing our bike ride we reloaded the bicycles on the Santa Fe and negotiated Jack’s Cabin Cutoff and returned to Lottis Creek Campground, where we snagged a nice campsite in the Union Park loop. Once the Big Agnes tent was assembled, we relaxed in our camp rockers and quaffed beers while munching snacks. After an hour or so of relaxation, Jane began to gather the essentials for a stir fry chicken meal, and at this point she discovered that she mistakenly packed frozen chicken drumsticks instead of the thawed boneless breasts she purchased for easy dicing. She was not sure the chicken would thaw in time for dinner, so I suggested we improvise with fresh caught trout and vegetable stir fry. Jane agreed that I should dedicate an hour and a half to fishing, but she also planned to pursue thawing the chicken as a safety net. 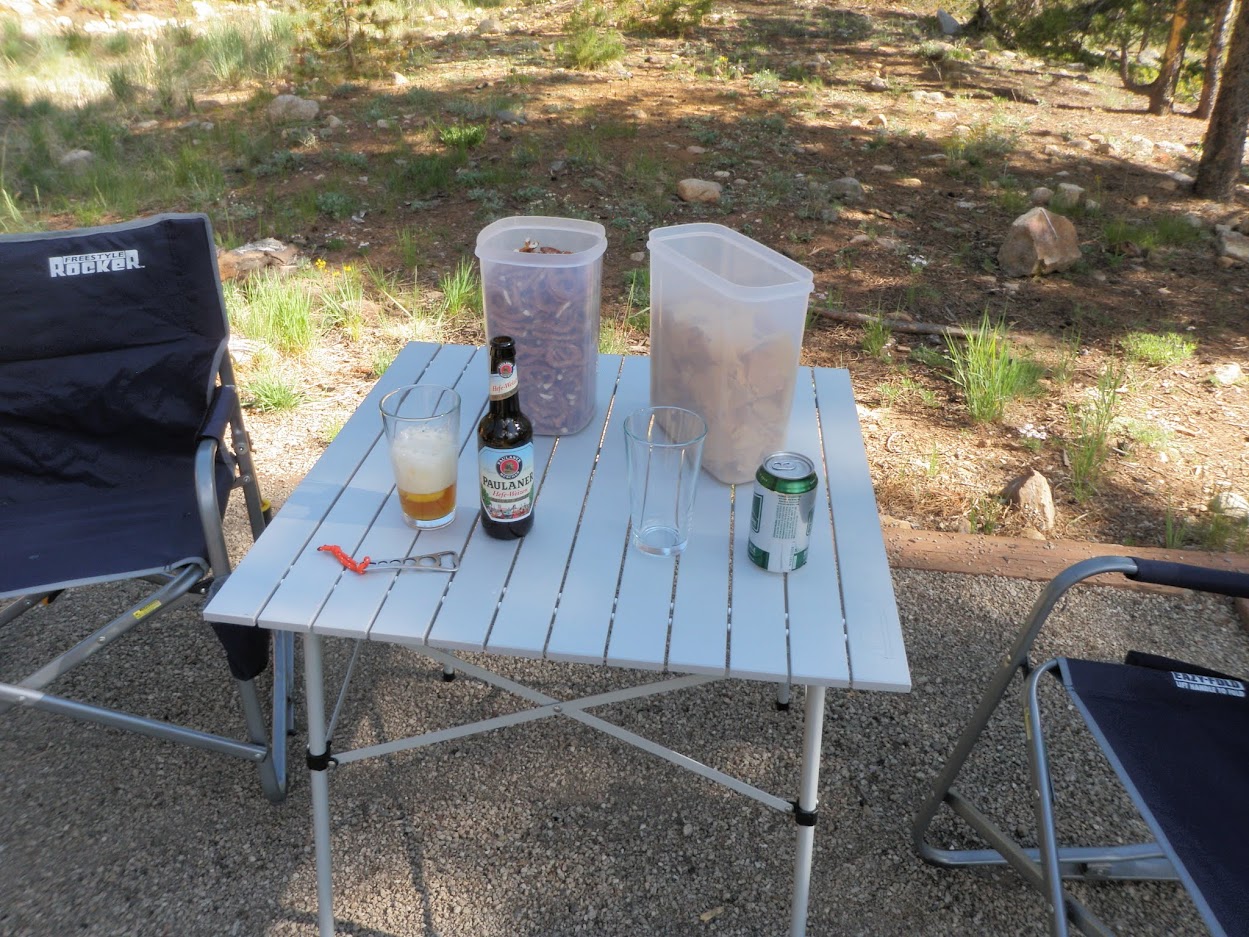 I accepted the challenge, and Jane and I drove .5 mile to the first section of public water below Lottis Creek. By now the river was in shadows, so I wore my regular glasses and assembled my Sage four weight and began my quest for dinner. I tucked a plastic shopping bag in the bib of my waders in case I was successful. At this point I realized that the 325 cfs flow that attracted me to the Taylor River was a bit deceiving, as I failed to account for the additional 100 cfs being dumped into the river by Lottis Creek.

I began my search for wild trout with a strike indicator, split shot, slumpbuster and beadhead hares ear, although deploying both a weighted conehead slumpbuster and split shot was probably overkill. I worked some attractive deep pockets along the bank for fifteen minutes without success, and since the allotted window of time was shrinking, I decided to make a change. I retained the slumpbuster and swapped the beadhead hares ear for an emerald caddis pupa. I observed several caddis in the air and hoped that the emerald color of the caddis pupa would stand out and attract attention.

The ploy worked somewhat as I quickly landed a six inch rainbow that chased the pupa, as I stripped it in an attempt to activate the slumpbuster. Unfortunately a six inch fish only represented two bites for each of us, so I released it and resumed my casting with greater urgency. Another fifteen minutes transpired, when I approached a very large run and shelf pool. On the fifth drift through this deep area the indicator dipped, and I set the hook and played a chunky twelve inch rainbow into my net. Hurrah! I would not need to return to the campsite empty handed, although one twelve inch trout shared among two people was still a minimal quantity of food.

I returned my focus to the river and fished intensely for another half hour, but I was unable to repeat the magic. At 6:55 I reeled up my line and returned to the Union Park loop, where I found Jane seated in her camp rocker. She was pleased to see my prize catch, but she was also relieved that she pursued the backup plan by thawing and slicing the frozen drumsticks. I cleaned the pretty rainbow trout, and we shared it as an appetizer before devouring the tasty chicken stir fry that Jane expertly prepared. Fathers’ Day was a success for this Dad, although I did miss my wonderful children, Amy and Dan.