Jane and I along with some pickleball friends reserved campsites near the St. Vrain from August 14 through August 17. Unfortunately a family emergency caused us to cancel our reservation, and it also thwarted my plans to fish the St. Vrain. Today, however, August 25 I returned to the St. Vrain for a day of fly fishing.

The temperature was sixty degrees, as I pulled into the parking lot and prepared to fish. I assembled my Orvis Access four weight for the small stream with tight vegetation, and I hiked a decent distance to create a buffer from the parking lot angling crowd. When I approached the creek, I was pleased with the perfect clarity, and the flows seemed a bit higher than normal for late August. I was actually pleased with this circumstance, since the conditions dictated less stealth than required at lower levels. 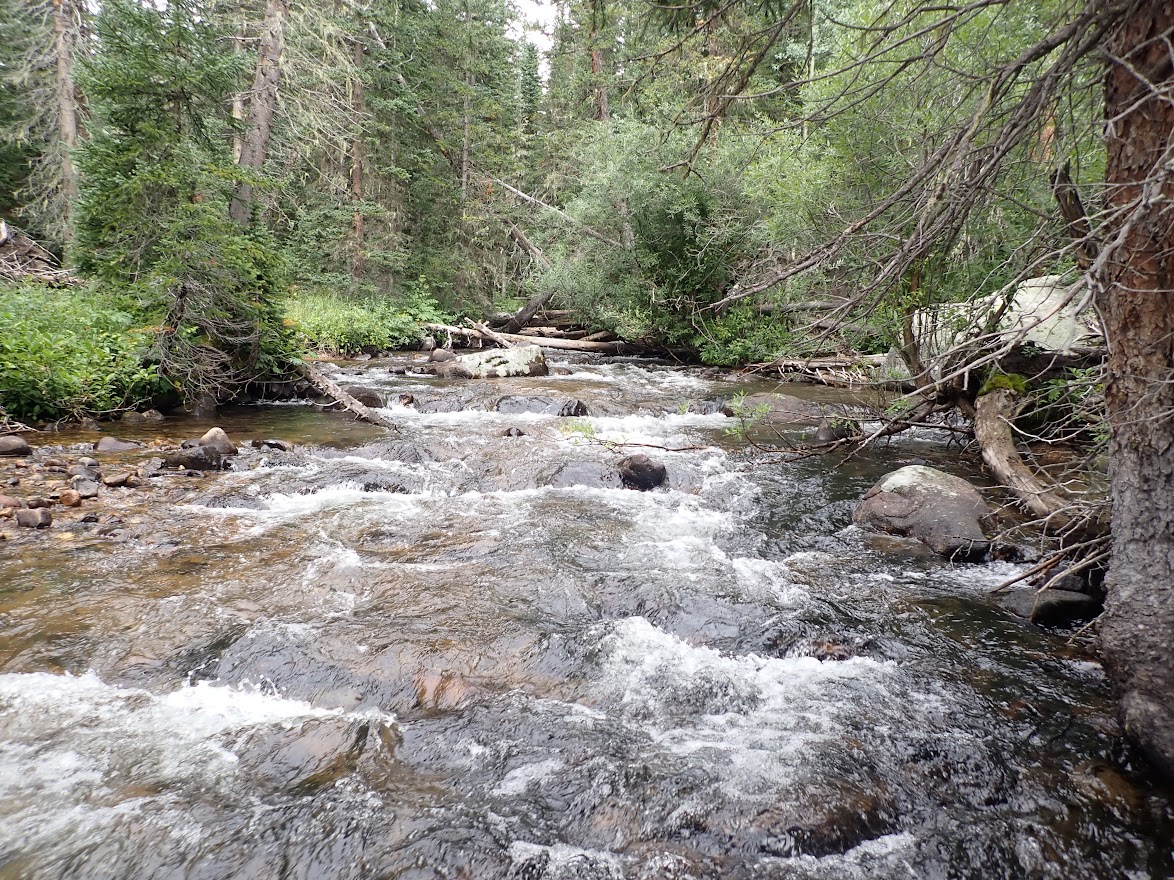 I began my day with a peacock hippie stomper fished solo, but after ten minutes with only refusals, I swapped the stomper for a size 16 olive body deer hair caddis. The refusals transitioned into takes, and I quickly built the fish count to five before a fairly lengthy lull suggested another change in flies. The small caddis was difficult to track, especially in faster runs and in riffled pockets, so I made a radical change to a classic size 10 Chernobyl ant. The Chernobyl produced several swirls and a temporary hook up, but it was ignored in some prime pools, so I reverted to the hippie stomper with a beadhead hares ear dropper. My evaluation of the dry/dropper was cut short, when I set the hook on an imaginary fish and catapulted the two flies into a live evergreen that was out of reach. Direct pressure resulted in the loss of both flies, and I used the pause to settle on a mossy bank to consume my lunch. 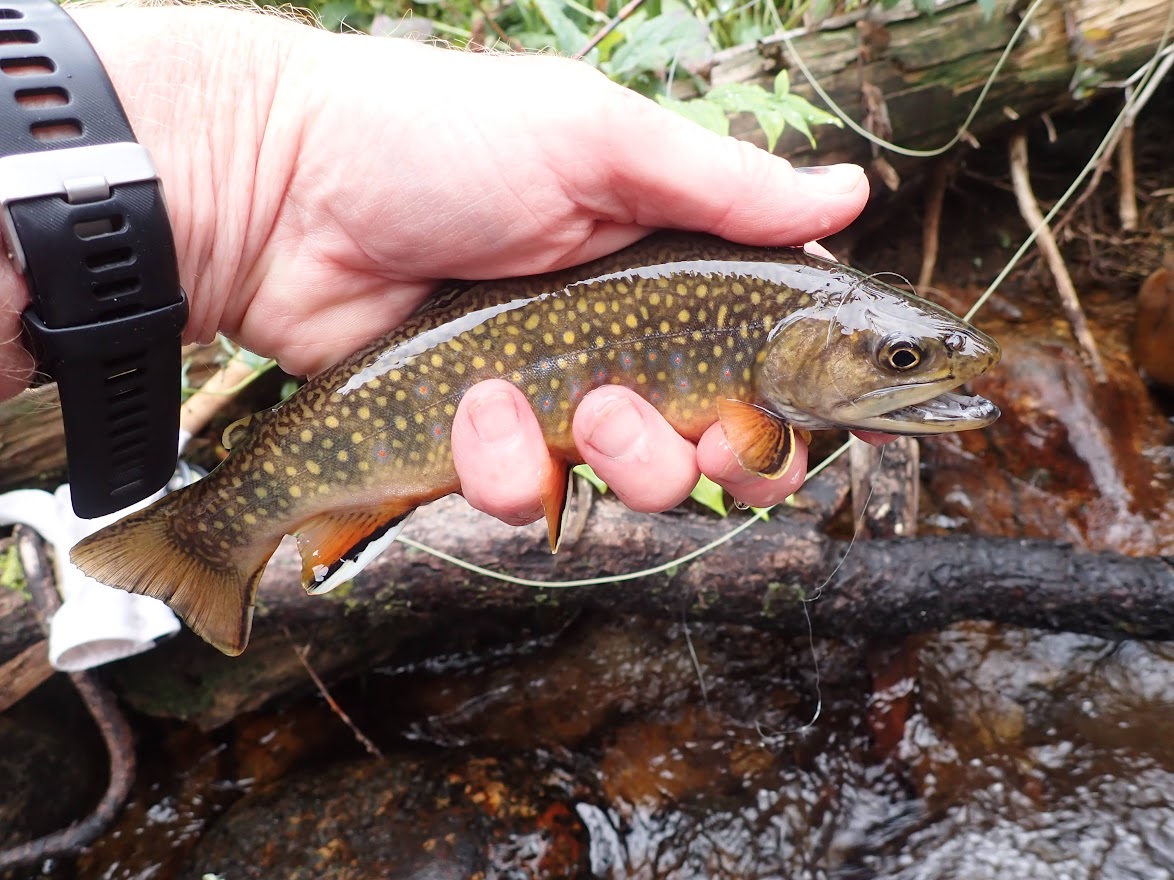 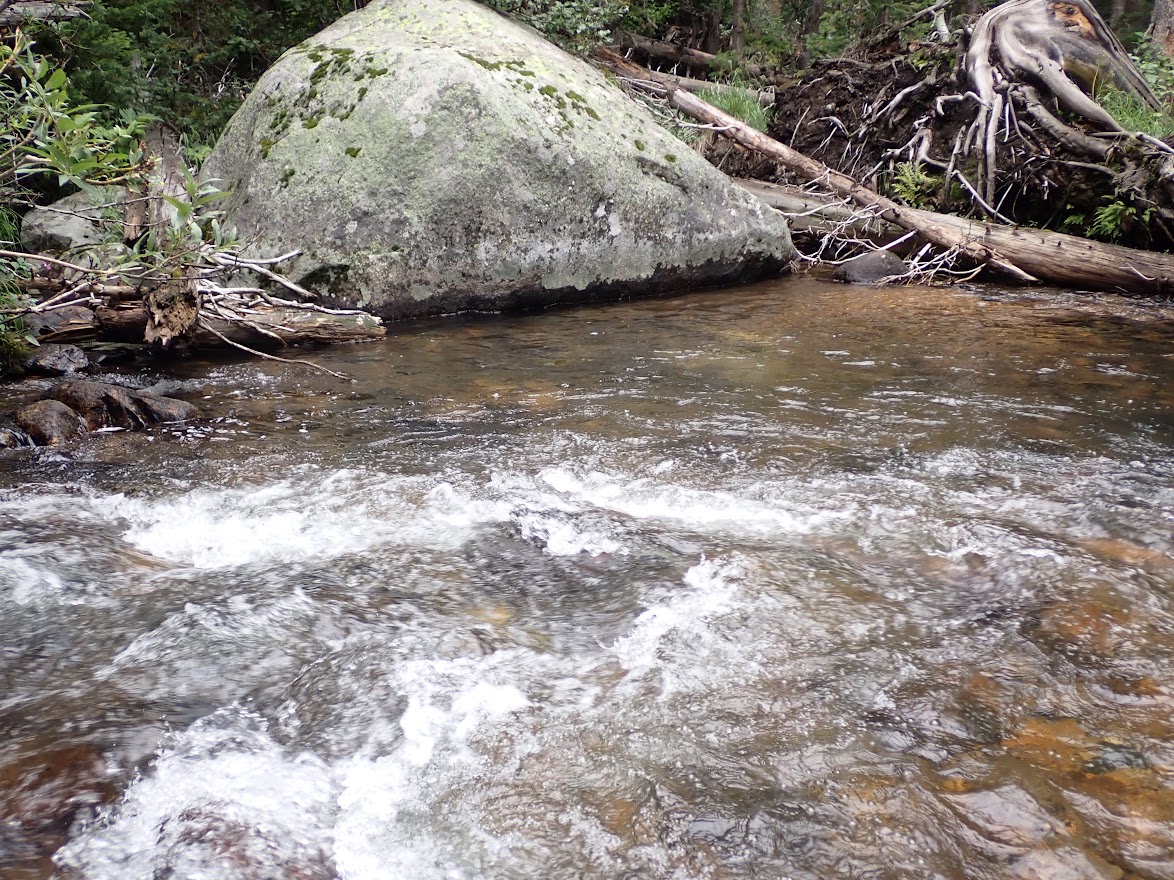 After lunch I replaced the dry/dropper with a Jake’s gulp beetle, since the fish showed interest in the Chernobyl, which I consider a large beetle. I hoped that a downsizing strategy would incite the resident fish to eat, but it did not, and I quickly converted once again to a yellow stimulator. The yellow stimulator accounted for several fish, and the fish count blossomed to double digits. The sixty degree air temperature by now had moved up moderately to the mid-sixties, but I was chilled from the perspiration from my inbound hike, so I pulled on my raincoat for additional warmth. This move proved to be a winner, as several waves of heavy cloud cover moved over the stream during the remainder of my time fly fishing. In fact, I spent the last hour fishing in the rain. 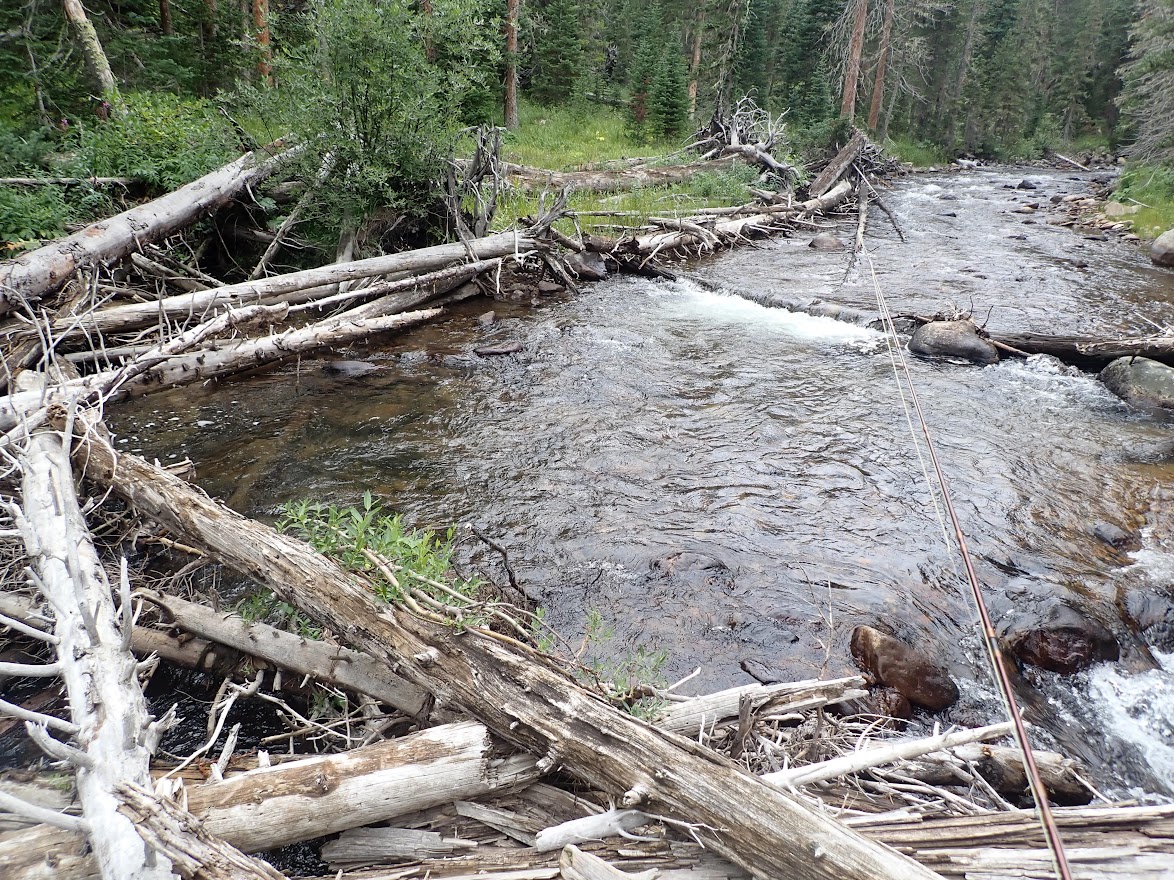 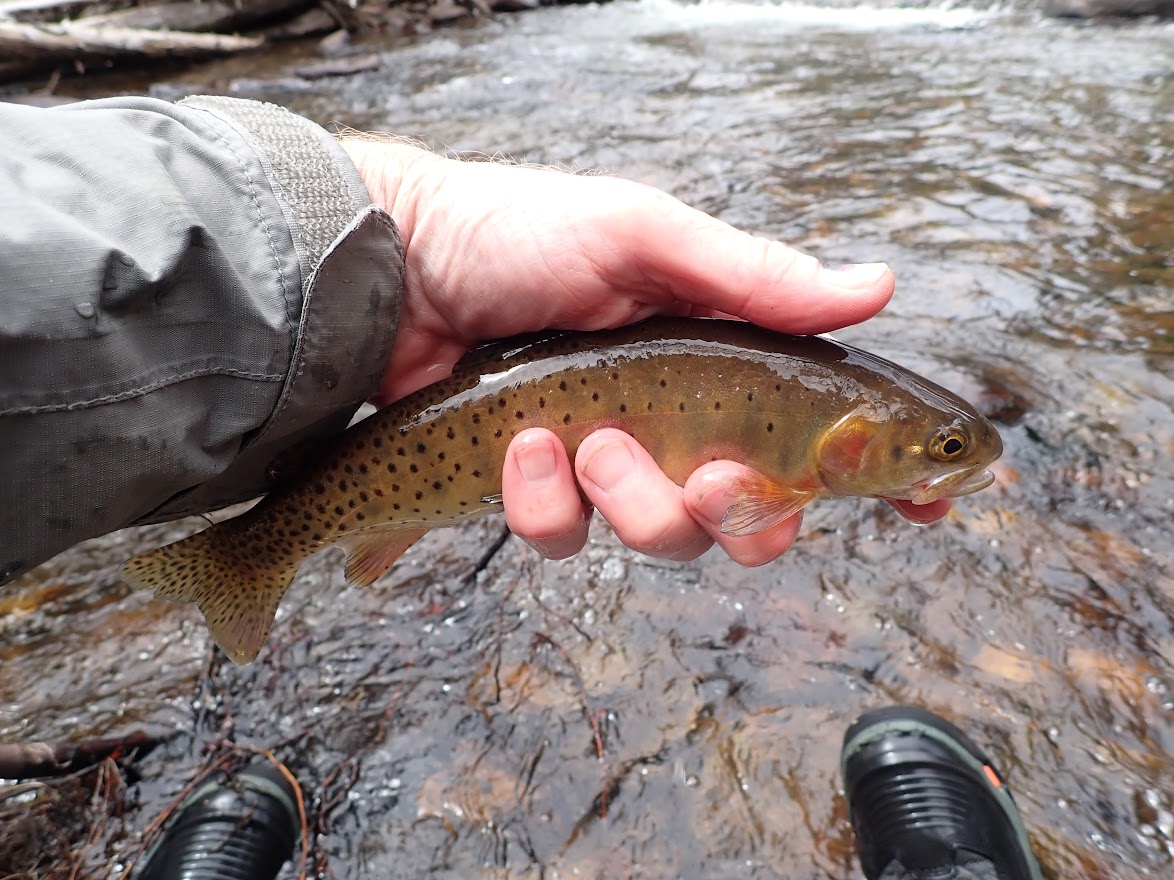 As was the case with the previous flies, the stimulator wore out its welcome, and I paused to assess my choices. I decided to once again prioritize visibility, and I returned to the peacock hippie stomper, and during this installment, I added a black sunk ant on a 1.5 foot dropper. I wanted the ant to be near the surface, since most of the feeding seemed to be in the top layer of water. I finally found a consistent producer, and I maintained the stomper/ant dropper combination for the remainder of the afternoon and built the fish count to thirty-three. Once I settled on the productive combination, I had a blast. I moved relatively quickly and focused on the water types that generated the best results. Long riffles over coble bottom with two feet of depth or greater were sure bets. Soft shelf pools and deep plunge pools with slow moving current were also attractive options. Depth and cover were the two main qualities that defined consistent positive results on the high country stream on Friday. 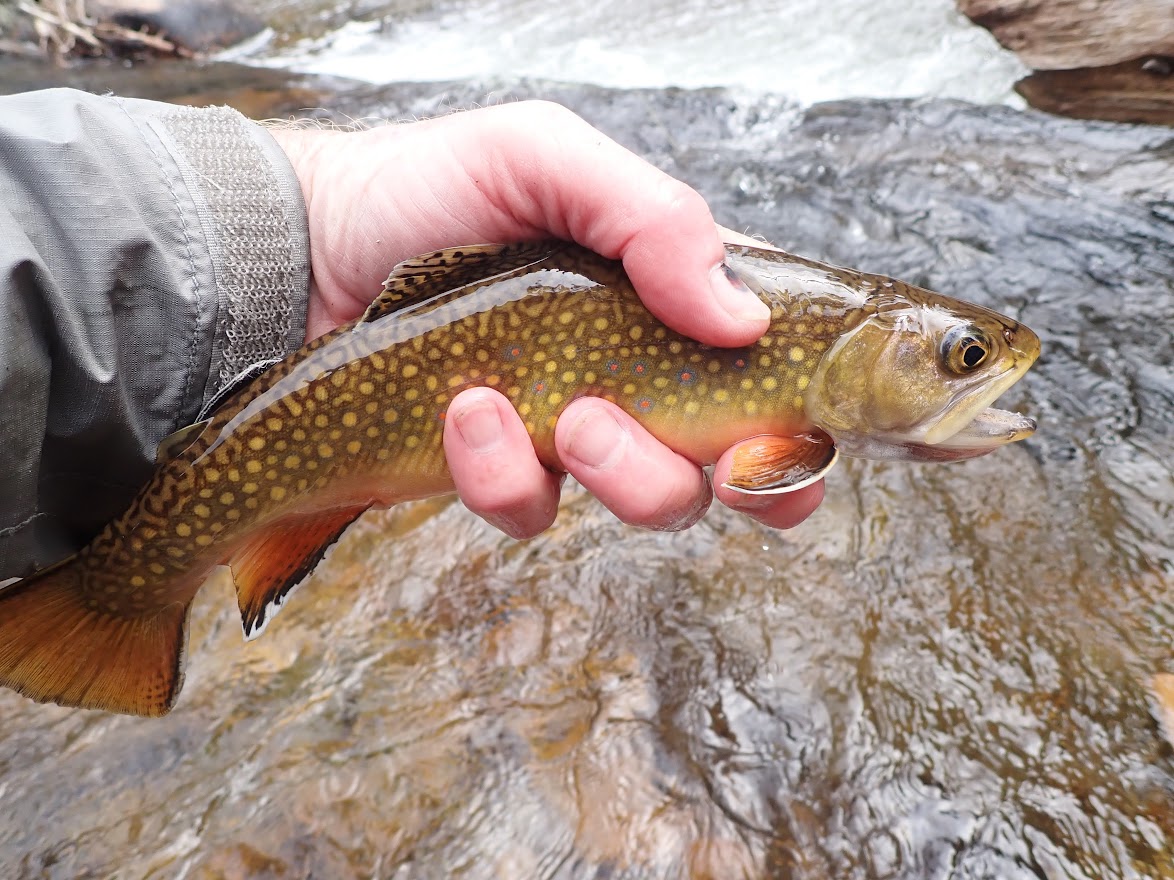 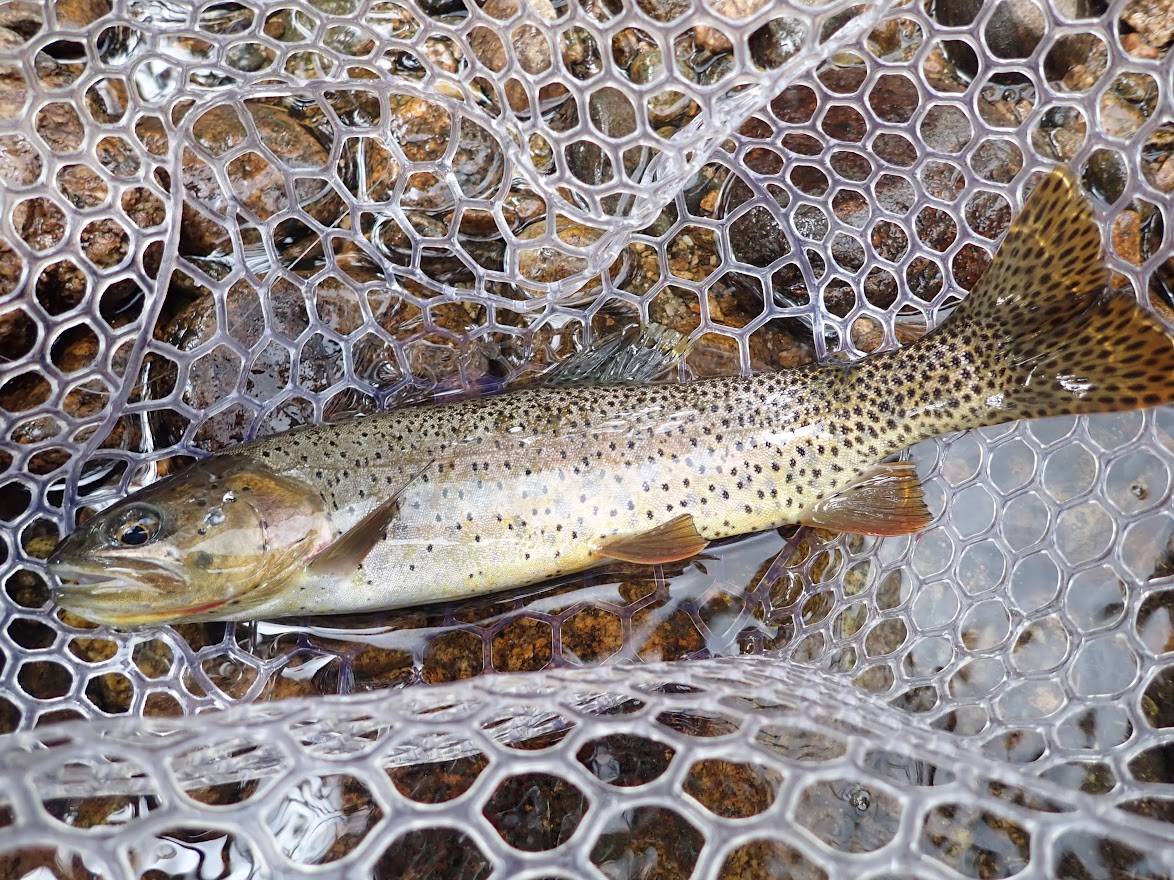 Maybe Best of the Day 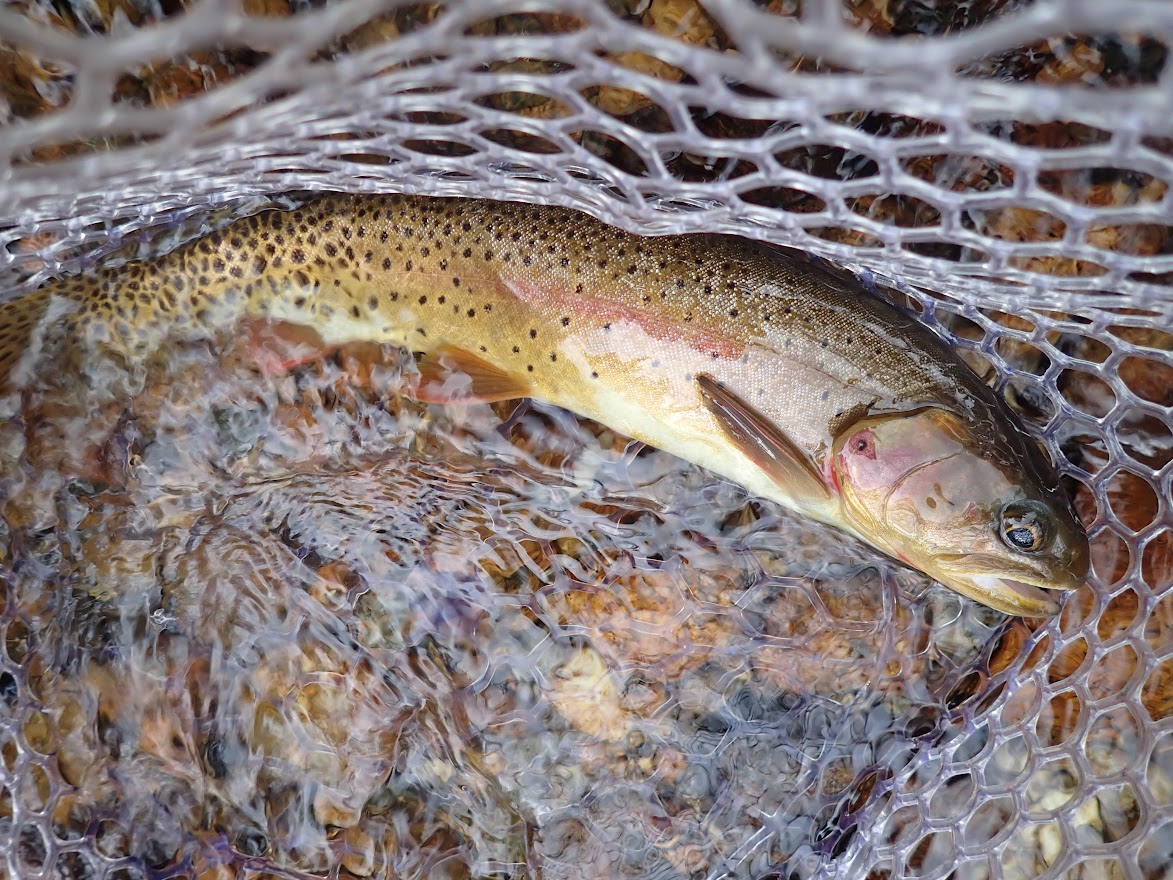 Wide Body for This Creek

What was I catching? My largest fish were cutthroats, and I landed six absolutely gorgeous slash jawed trout during my four hours. The cutthroats were not as populous, but they definitely guarded the prime locations. The rest of the fish that dwelled in my net were brook trout, and they were much more aggressive feeders and disbursed throughout the system, but the largest brookie measured eleven inches, and most fell within the six to eight inch range. The brook trout made up for their lack of size with their color schemes, as I released many with bright orange bellies. 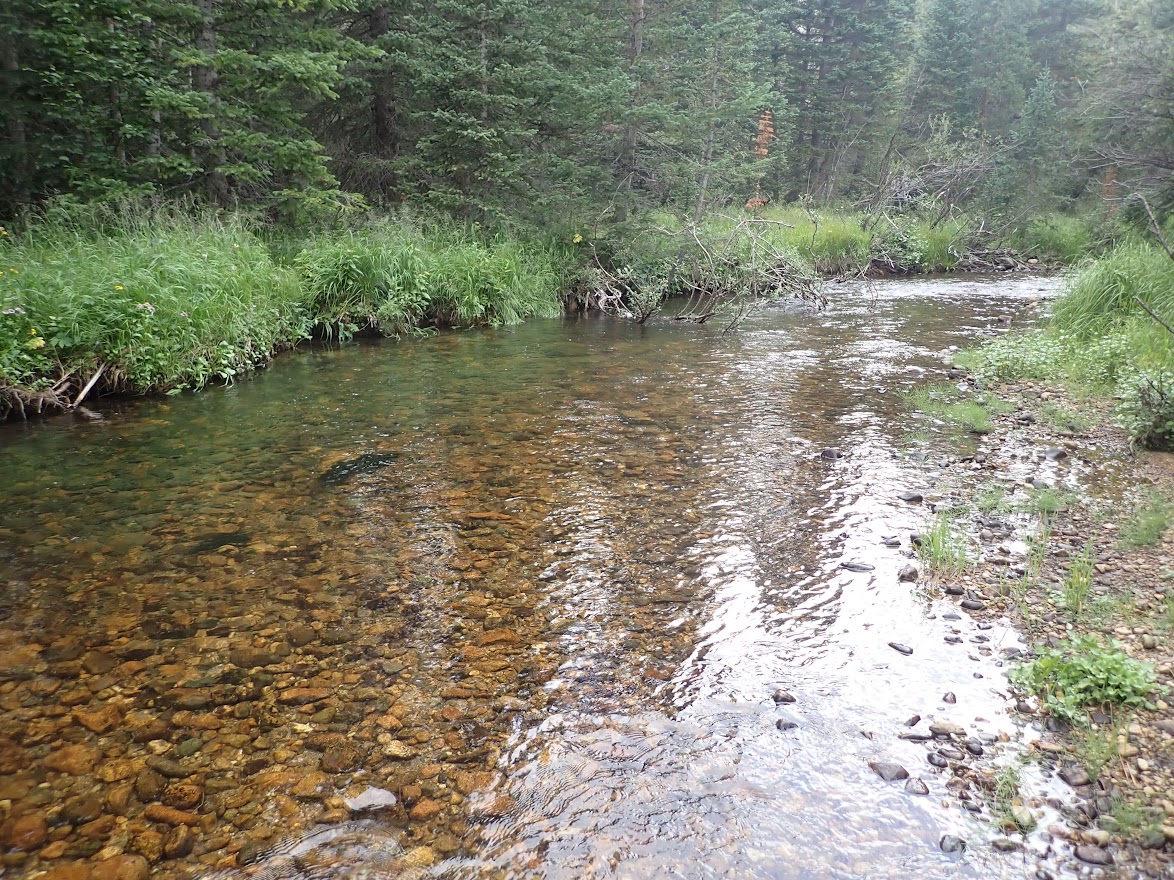 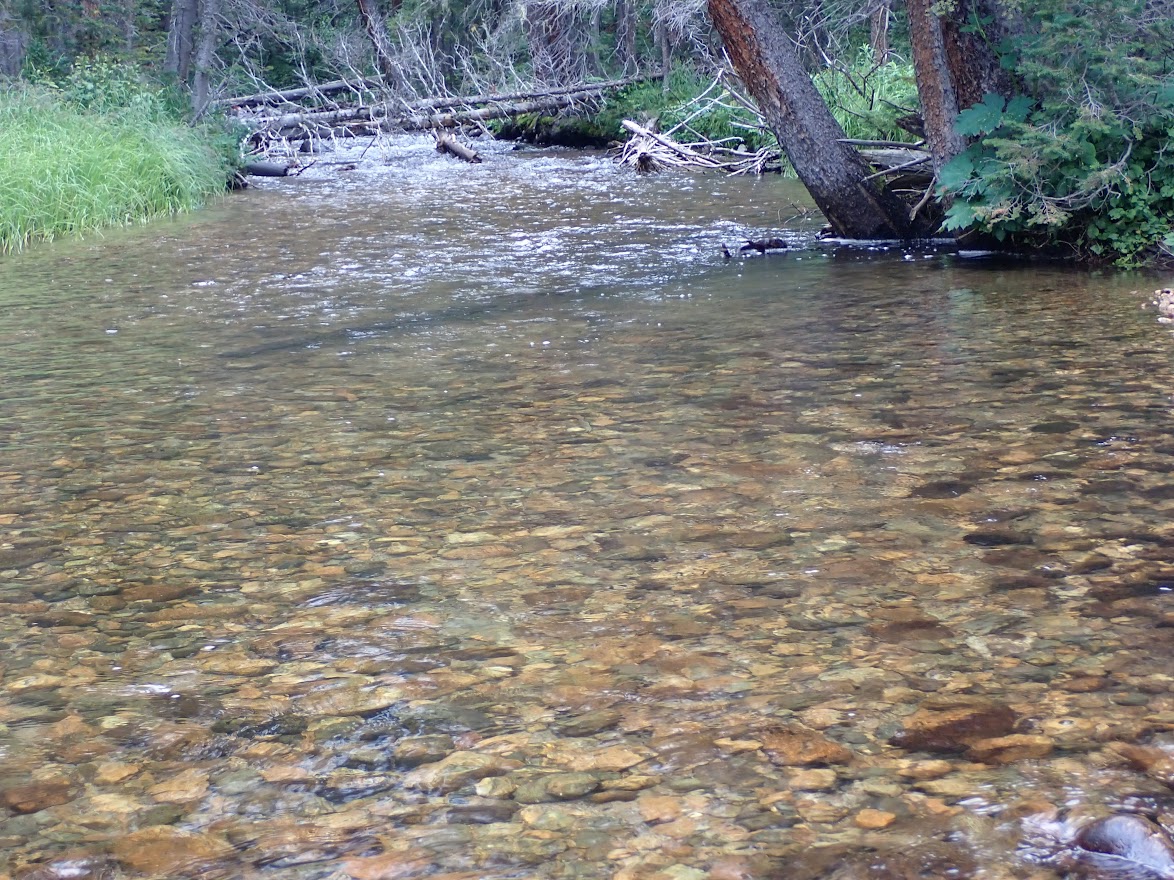 Friday was a fun day. I love prospecting high country streams in spite of the tendency for the fish to be on the small side. The surprise of a surface smack by a wild trout never grows old, and the possibility of encountering a copper hued speckled cutty with bright red cheeks and a slash under the jaw is hard to resist. 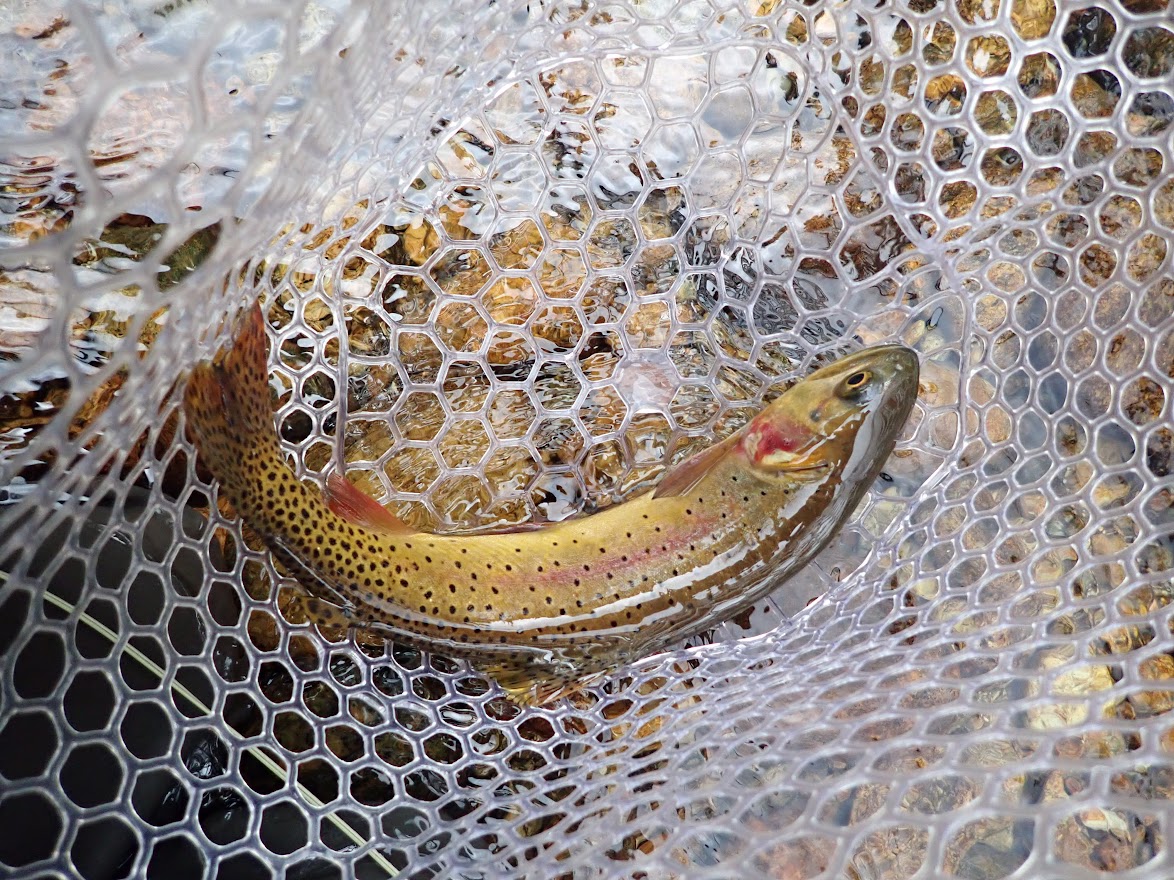 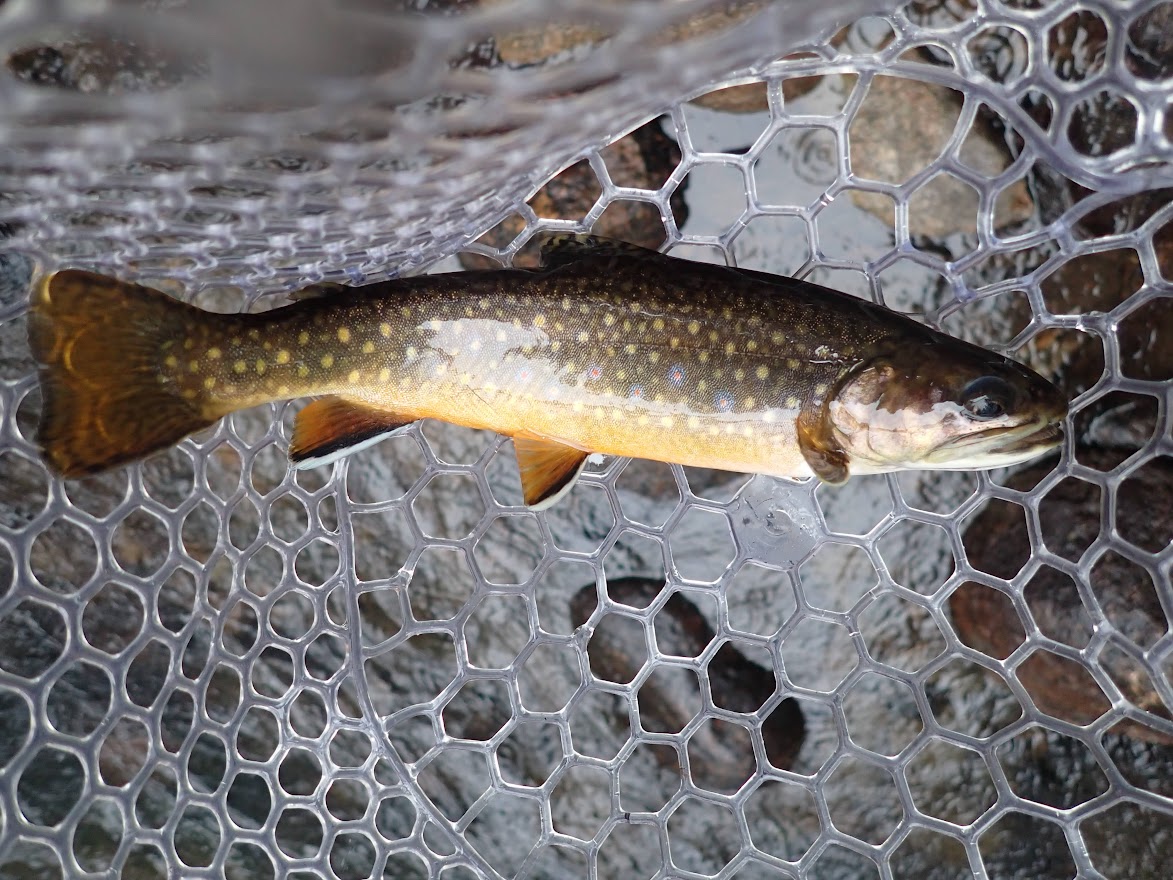