Location: A couple miles upstream from the Spring Creek Campground

During the morning of Tuesday, July 21, I was unable to land a single fish on the Taylor River; so I decided to delay my arrival on the frigid tailwater until the afternoon. Not wishing to waste a morning after the long drive to the Taylor River valley, I decided to spend Wednesday morning on Spring Creek, a small tributary. I fished Spring Creek one other time many years ago with decent results, and I was anxious to discover, whether the fishery continued to flourish.

I packed up my camping gear and made the fifteen minute drive to CO 744, and I followed the creek on a washboard riddled dirt road. I passed the area that I fished previously and looked for a spot that combined four key criteria: a pullout where it was safe to park, a lower gradient section, reasonable access although not too easy, and the absence of other anglers. I found a location that seemed to meet these criteria and prepared to fly fish with my Orvis Access four weight. Once I was ready, I hiked downstream along the dusty road, until I arrived at a spot, where the creek made a bend next to the road. Thick bushes occupied most of the area between the road and the creek, and gaps that afforded reasonable access were few and far between. 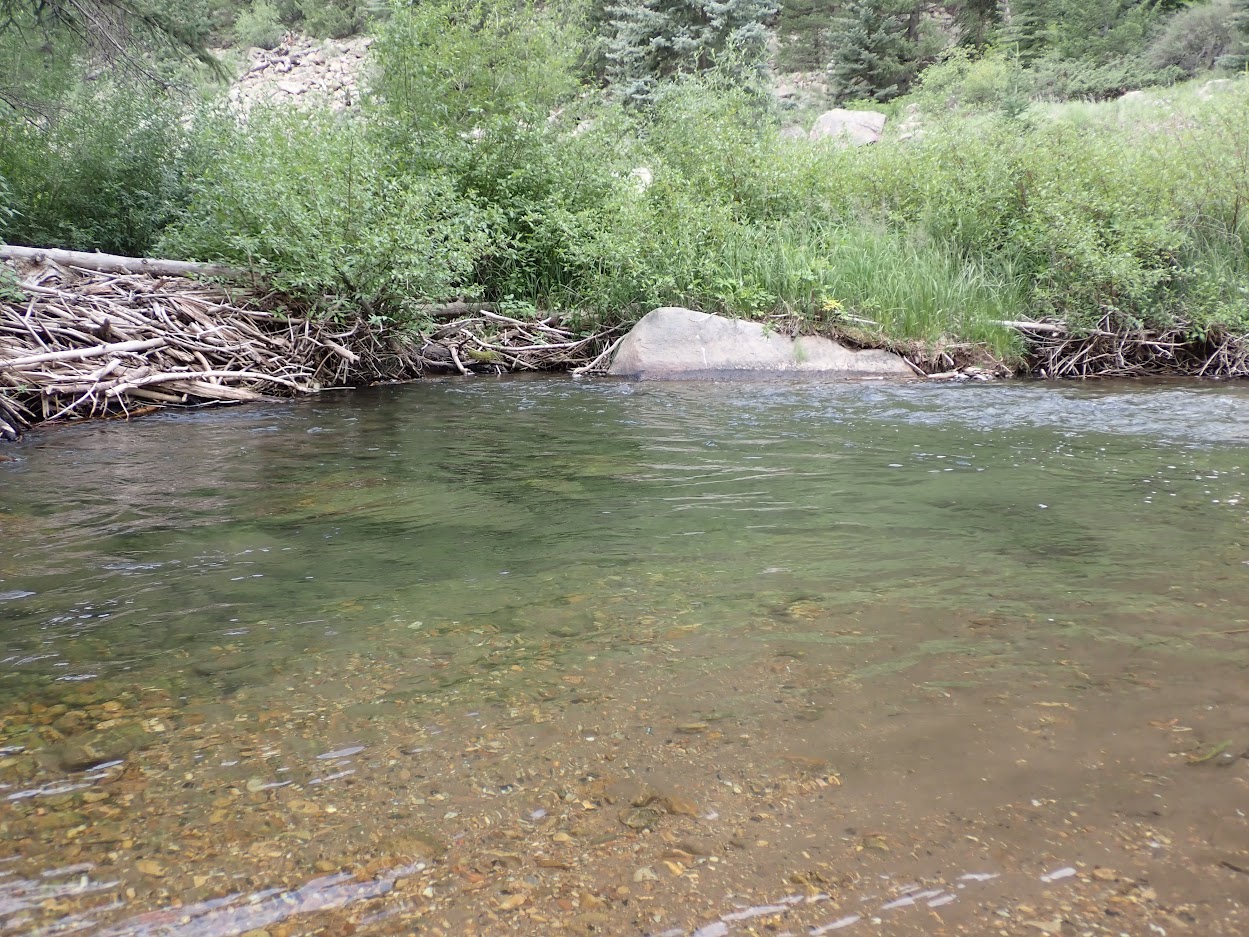 Perhaps the Best Pool of the Morning

I began my effort to locate Spring Creek trout with a size 14 yellow stimulator, as I surmised that yellow sallies were present on the mountain stream. The fish seemed to recognize my fly as a local food item, as I immediately experienced four very brief hookups. I was pleased with the recognition of my fly as food, but the takes seemed to be very tentative, and I attributed the temporary connections to the reticence of the trout to fully commit to the yellow stimulator. Quite a few small caddis and spruce moths occupied the shrubs and trees that bordered the stream. I decided to persist with the stimulator concept but change body color, and I switched to a gray size 14. This fly drew refusals, but it also registered a few brown trout, and I was off and running. 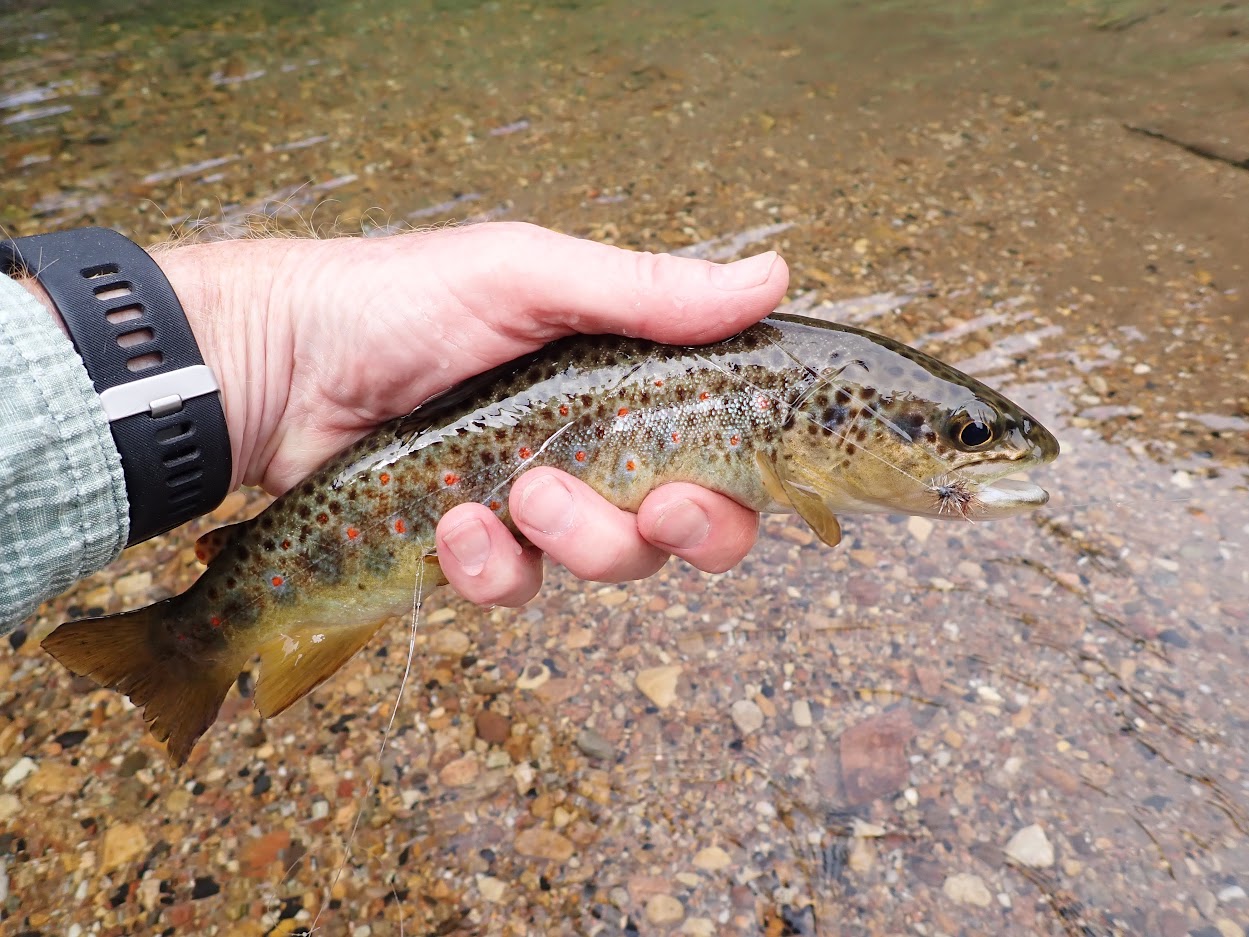 At some point I attached a six inch leader to the bend of the stimulator and added a size 16 olive-brown caddis. The move benefited my quest for trout, and the fish count quickly climbed. It seemed that every nook and cranny in the creek yielded a trout in the early going, although in many cases the interest was a look or long distance release. After I reached eight trout, the flies became permanently waterlogged, and I grew weary of sopping up the moisture and dipping the flies in dry shake, so I initiated a new approach. I yearned for the additional buoyancy of foam and snipped off the double dry and knotted a size 12 peacock hippie stomper to my line. 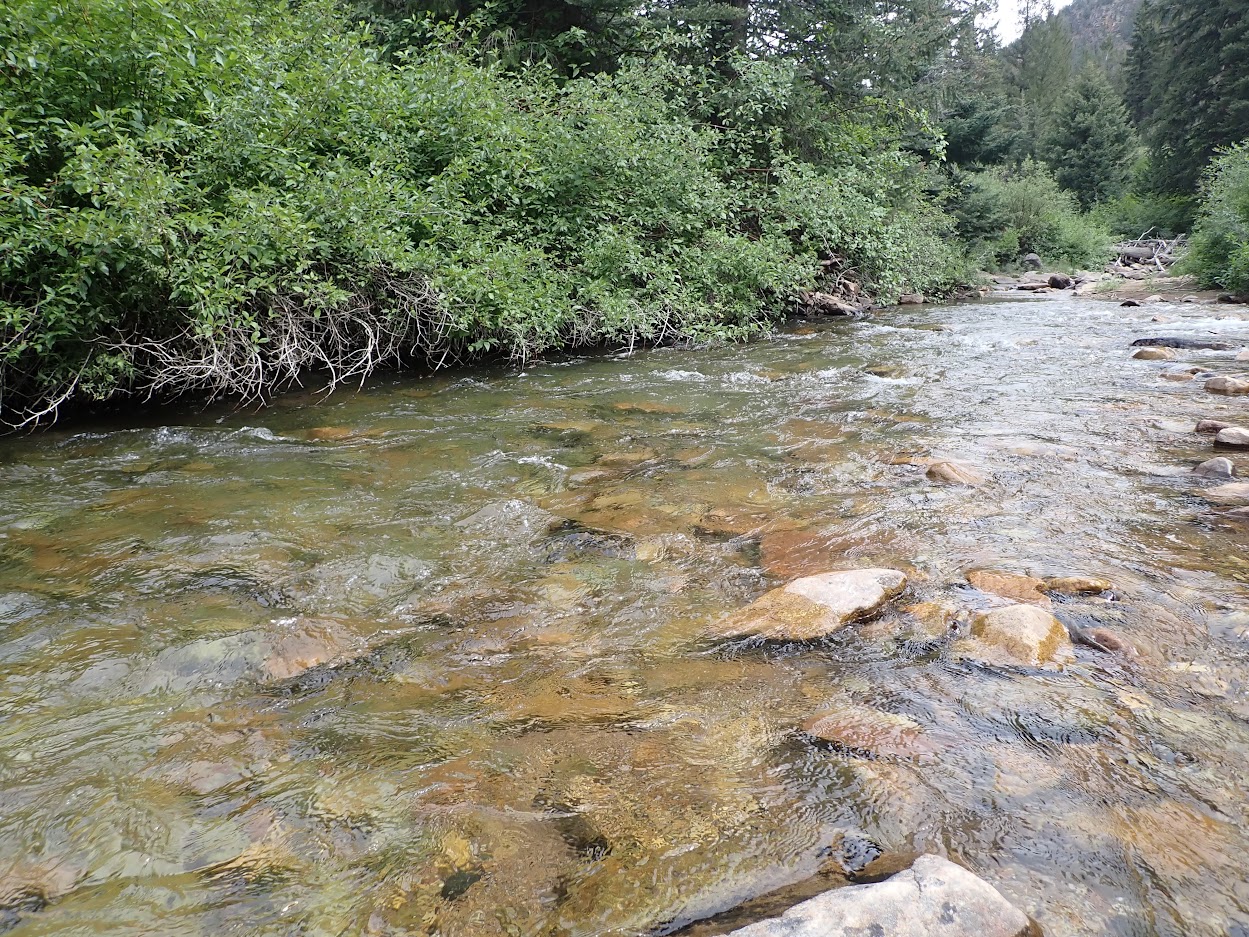 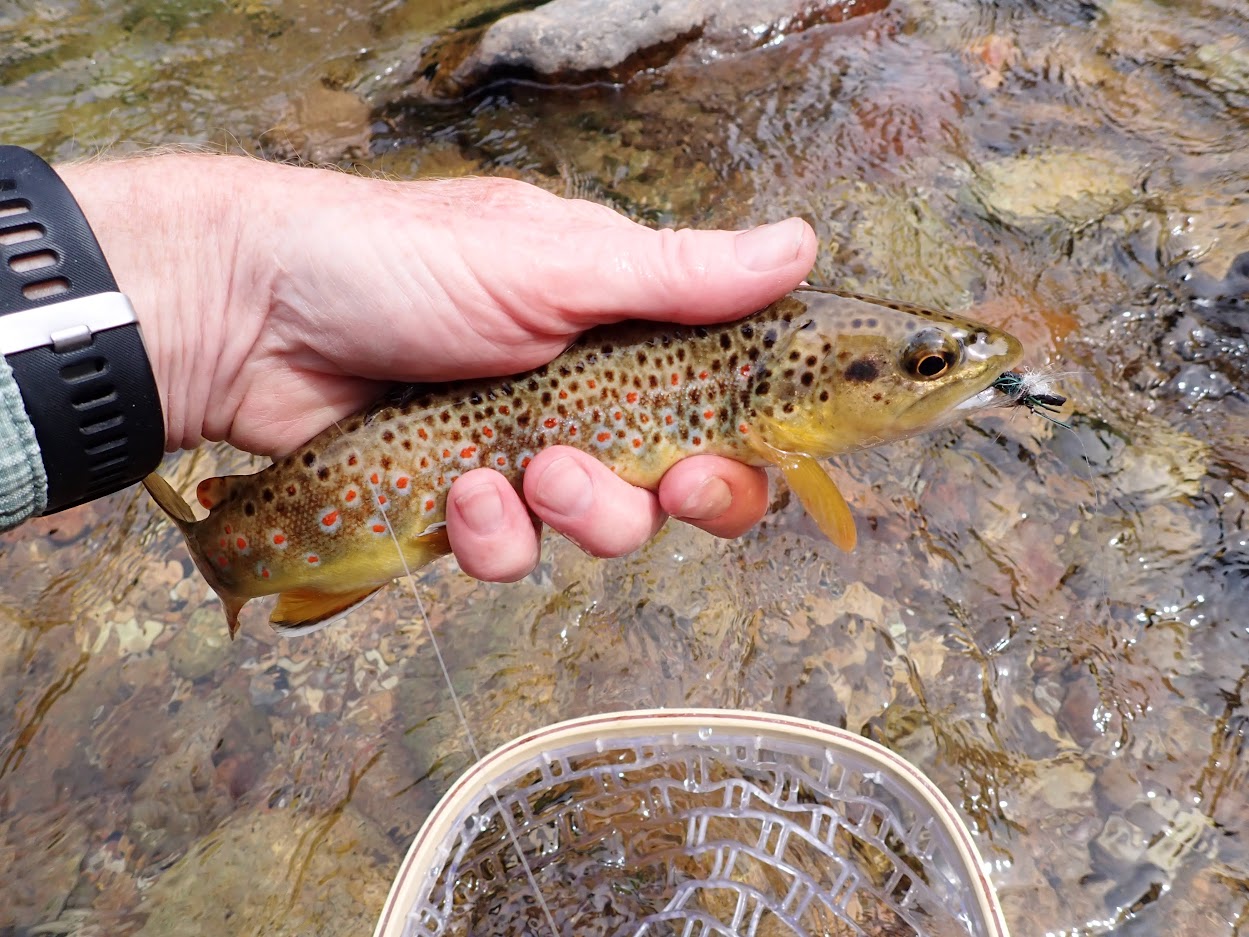 The stomper performed well, although the frequency of rises ebbed, and the fish that exerted the energy to crush the foam attractor seemed to be larger. By 11:00AM I noted another fisherman fifty yards upstream, and naturally I was disappointed with this development. Apparently he spotted me, and departed after a few casts, but I was nevertheless concerned that he moved a short distance upstream and out of view. As I moved closer to the opening, where the other angler appeared, the frequency of interaction with trout lessened, and I attributed this circumstance to easy access for fishermen who, unlike me, were unwilling to bash through bushes or wade in fast currents. 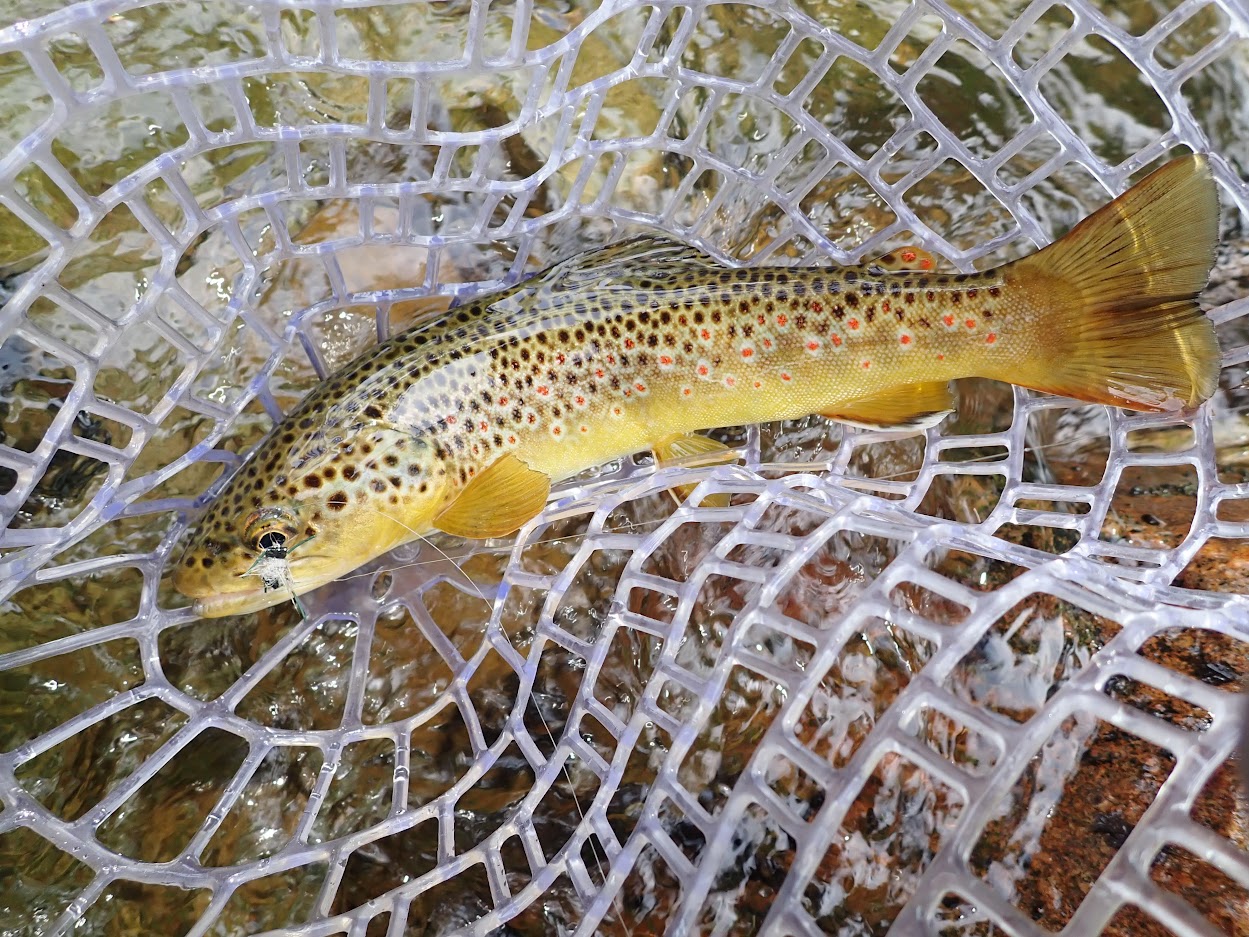 Very Nice for a Small Stream 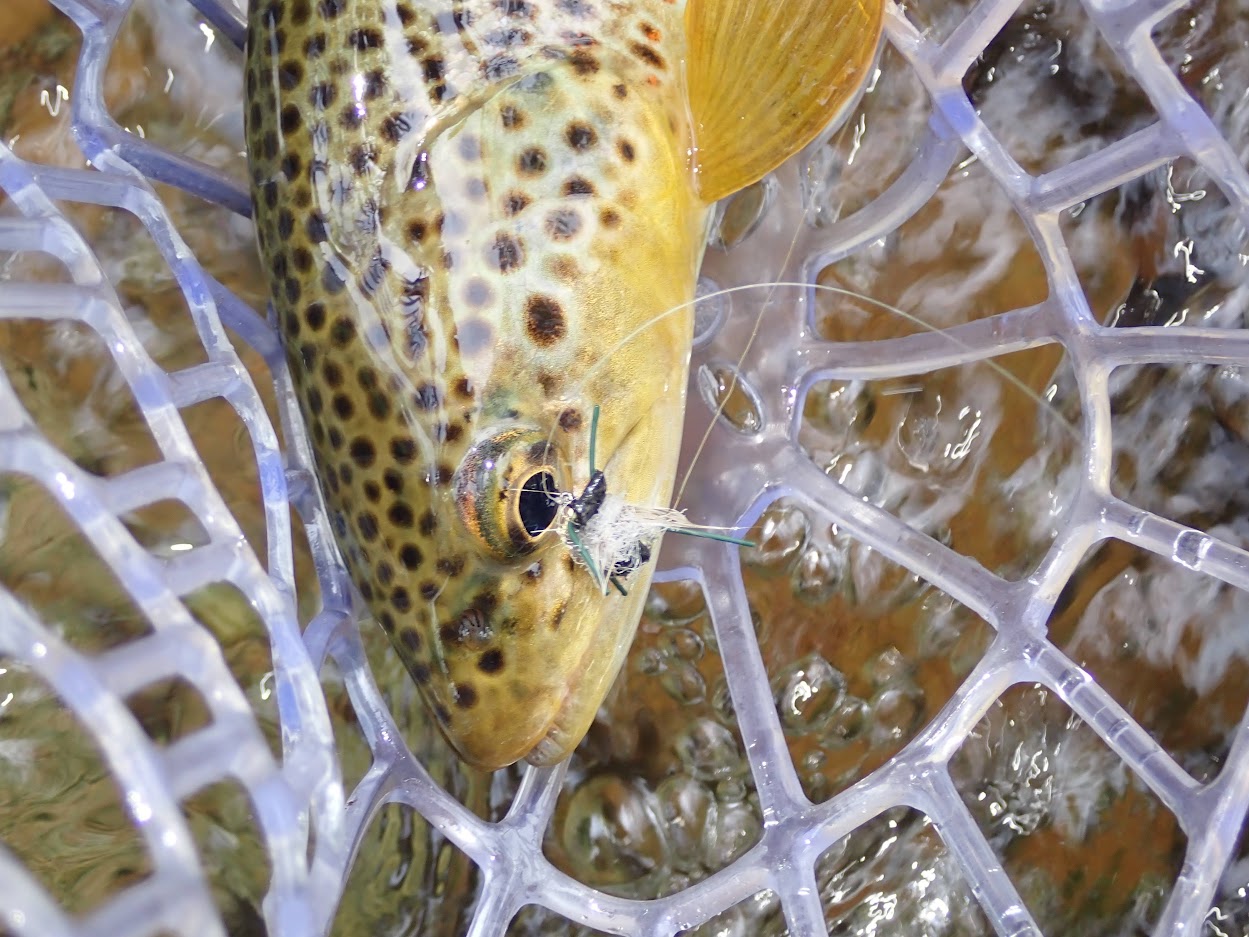 I added a beadhead hares ear on a dropper off the hippie stomper to counter the assumed pressure, and two of the last three trout nabbed the subsurface offering. My final tally leveled out at thirteen, and after glancing at my watch I noted that it was approaching 11:30. I decided to climb the bank and walked back down the road to my car in order to secure a few hours on the Taylor River during prime time. My morning on Spring Creek was a pleasant change from the larger brawling Taylor, and I had a blast prospecting with attractor dry flies. Thirteen trout in 2.5 hours of fishing was a pleasing outcome, and Spring Creek seems to be thriving since my previous visit. I would eagerly welcome a return.