A forecast of 68 degrees in Denver had me anxiously anticipating another day of fishing in 2019. Fly tying is a pleasant winter diversion, but being out on the stream is a far better option. November 19 is late in the season for this avid fair weather fly fisherman, and a lot depended on my chosen destination for what could possibly represent my last day in 2019.

My day on Friday on the Cache la Poudre River was nice, but it confirmed that rainbows were more willing eaters than spawning brown trout at this time of year. What streams offered the highest ratio of rainbow trout to brown trout? The Big Thompson River, South Boulder Creek and the South Platte River immediately came to mind. I quickly ruled out the Big Thompson under the assumption, that 68 degrees in Denver translated to fairly chilly temperatures at the higher elevations near Estes Park. South Boulder Creek was interesting, as the flows returned to 89 CFS, but I was concerned that the narrow canyon walls would shield the warming impact of the sun, and snow and ice might remain from storms during the prior week. 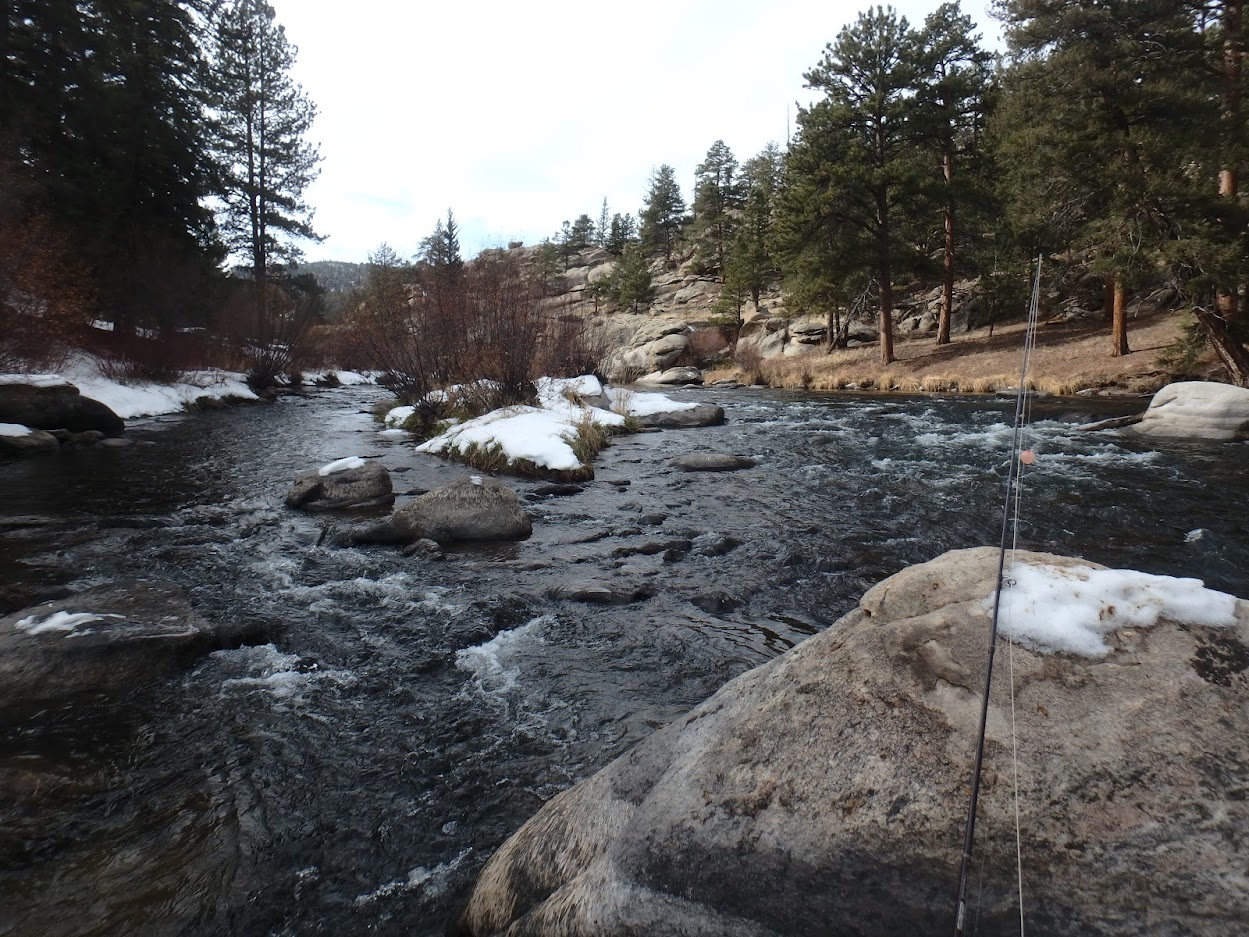 More Snow Than I Expected

The projected high temperature in Lake George near Eleven Mile Canyon was 60 degrees, and the releases from Eleven Mile dam registered flows of 99 CFS. These two factors weighed heavily in my decision, and I made the two plus hour drive to Eleven Mile Canyon on Tuesday morning. Unfortunately as I advanced along the dirt road that provides access to Eleven Mile, I was disappointed to discover significant remaining accumulations of snow throughout the canyon. Apparently the factor that ruled out South Boulder Creek was an equal negative in Eleven Mile, although fly fishing in this area did not require an extensive hike in a manner similar to that of South Boulder Creek. 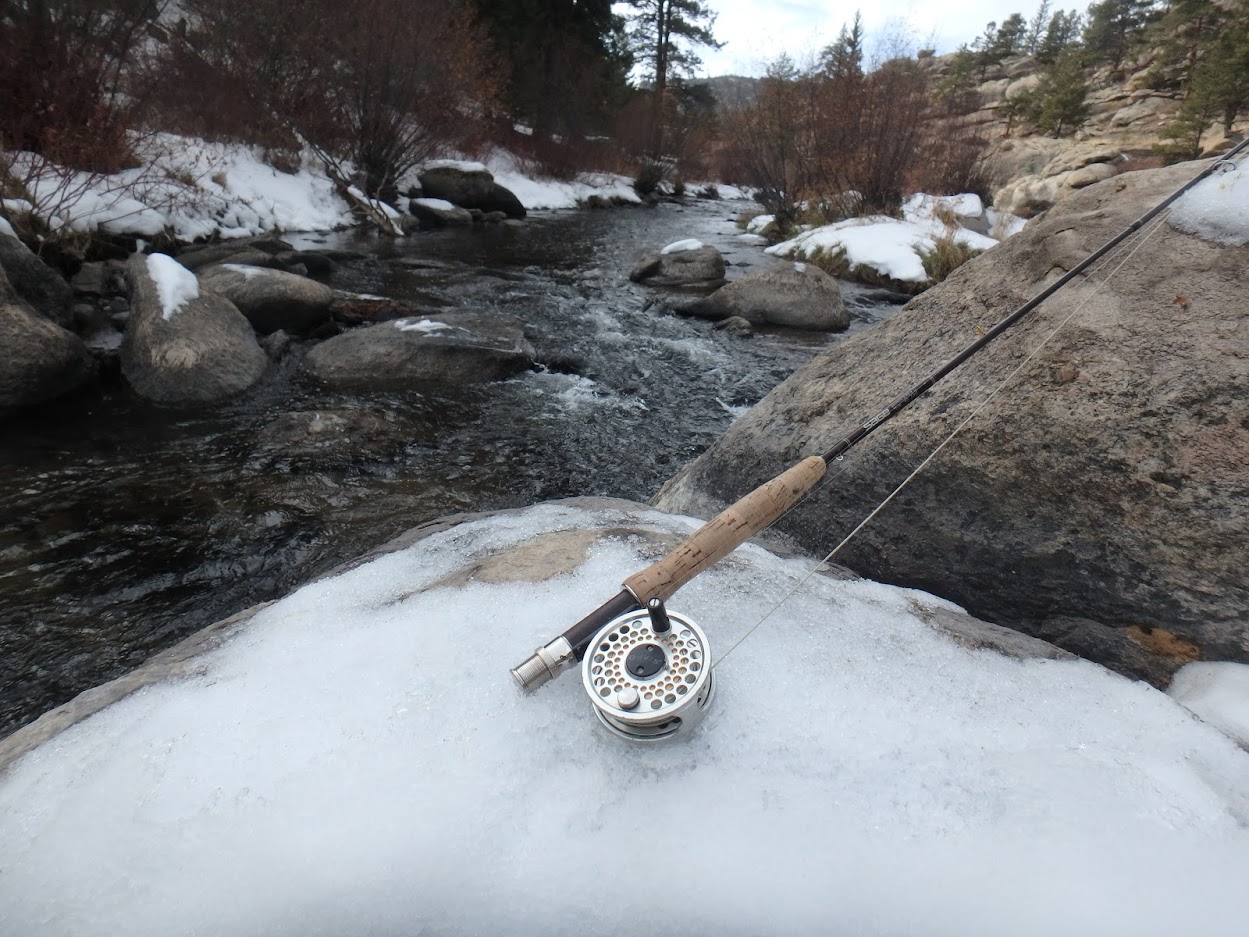 I found a plowed pullout along the road and prepared for a day of fishing. The temperature on the dashboard display was in the upper thirties, so I pulled on my Under Armour undershirt, a fleece, and my North Face light down in addition to my New Zealand billed cap with ear flaps. I added some fingerless woolen gloves to my array of winter attire, and I never regretted the multi-layer approach during my 3.5 hours of fishing. I assembled my Sage four weight and hiked toward the dam a short distance. I faced a new challenge; the task of getting down the steep bank that separates the access road from the South Platte River. 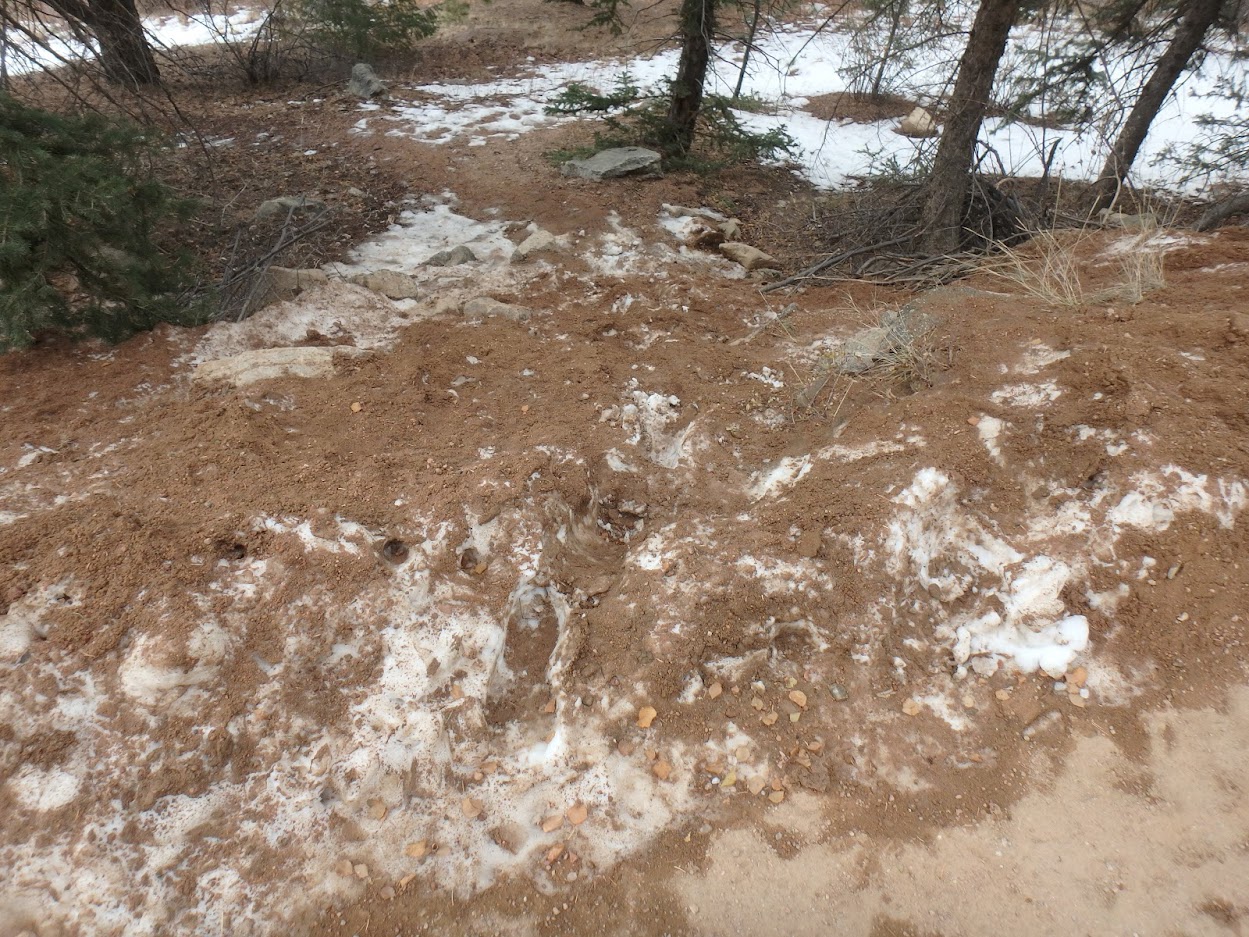 The Path to the River

After a short walk I encountered three “paths” that enabled me to descend to the river’s edge. I placed paths in quotation marks, because they were simply large sunken footprints in deep snow. I elected to maneuver down the set closest to the dam and carefully stepped down backwards to avoid a face first fall. The ploy worked, and I reached a nice pool unharmed.

With flows at 99 CFS and relatively deep snow lining the banks, I decided to deploy a deep nymphing rig. I looped a thingamabobber to my line and added a split shot, orange scud and beadhead size 20 RS2. I prospected some attractive deep runs between 11:30 and noon, but I encountered no evidence of the presence of trout. A layer of clouds blocked the sun’s warming rays, and the air temperature lagged my expectations, so I found a large rock that was devoid of snow and consumed my small lunch. At this point in my day I was not optimistic that a trout would grace my net, even though I only fished for thirty minutes. 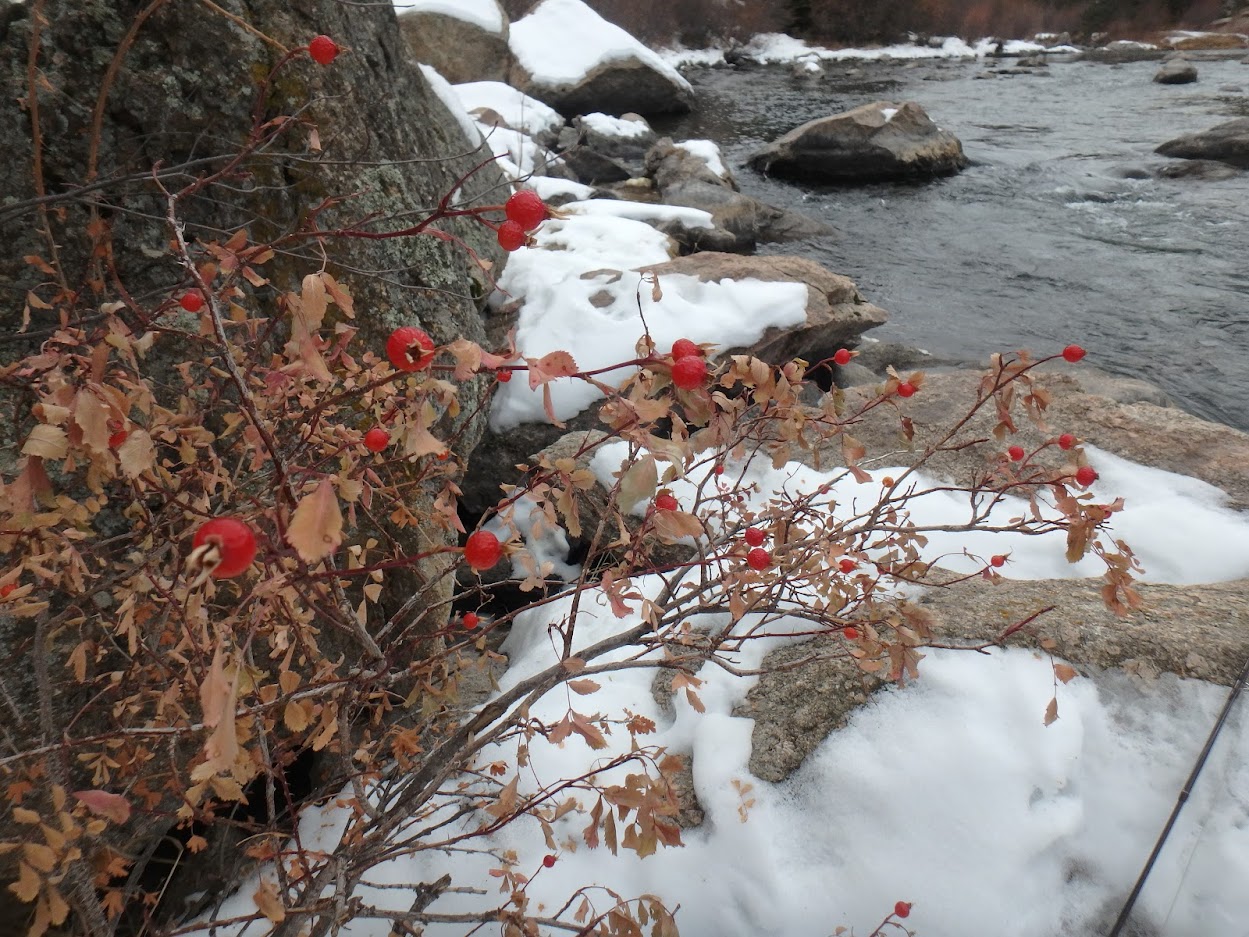 A Splash of Color in November

After lunch I migrated upstream to a very attractive pool, and I prospected the tail and midsection with an abundant number of casts, but again the trout were uncooperative. I allotted many more drifts to each prime location than was my normal summer practice, but patient persistence was not translating to success. Finally I arrived at the gorgeous deep trough that ran along the main current seam near the top of the pool, and much to my amazement the indicator paused on the first cast, as the flies tumbled out of the whitewater froth and into the deep slower moving slot. I reacted with a hook set, and the torpedo streaked downstream, and within seconds my line was limp, and the first connection of the day slid into the long distance release column. I persisted in the same area, and once again the indicator paused, and again I hooked a strong trout that chose a downstream escape route and managed to shed my fly. Given my misgivings over my ability to land a fish on the cold November day, you can imagine my state of mind after two consecutive escape episodes. The twin incidents did, however, elevate my confidence and prodded me to persist in my pursuit of South Platte River trout. Gaining knowledge of which fly duped the trout would have been welcome, but the releases pointed to the small classic RS2 with a small hook gap.

I once again progressed upstream along the river and carefully avoided ice patches and packed snow, until I arrived at another large quality pool. Earlier I spotted another angler in the area, but he was absent by the time I arrived, so I covered the large pool very thoroughly. I was certain that the large prime hole would produce fish, but it did not. I decided to exchange the orange scud for a 20 incher, since it was weighted and when combined with the split shot would provide deeper drifts.

The next section of the river was comprised of faster chutes and short pockets, and I made some cursory casts, but when results were not forthcoming, I continued on to the gorgeous pool below the first tunnel. This pool entertained me and friends on numerous occasions, and I was somewhat optimistic that it might erase my skunking on November 19. 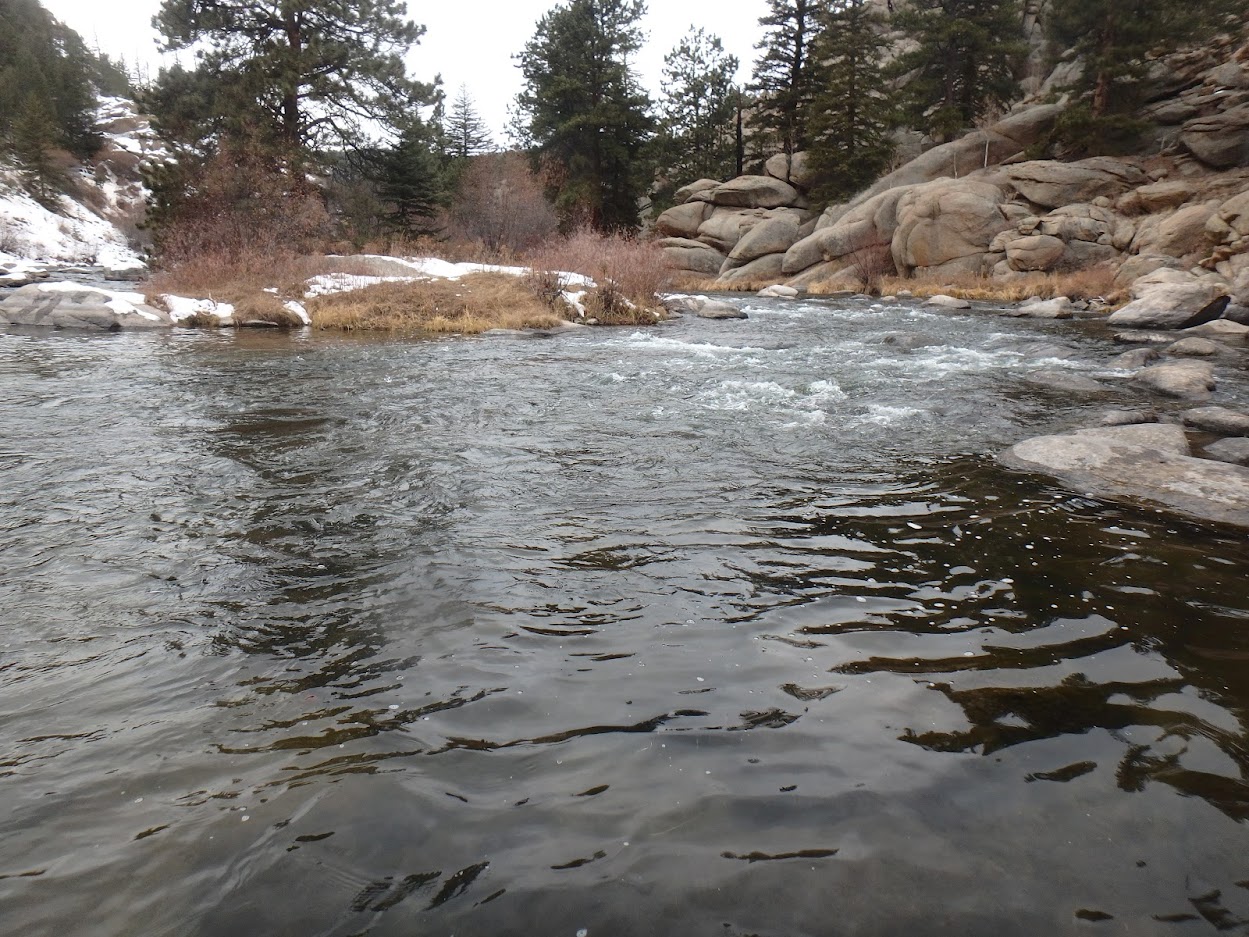 The Area That Produced

I moved immediately to the nice riffles that spanned the river at the top of the pool, and I sprayed casts across the entire area, but my hopes sank, as the flies only collected moss and aquatic debris. I took three steps downstream and once again executed casts starting within eight feet of my position and then extending outward. In the blink of an eye the indicator dipped, I set the hook and a spirited rainbow trout thrashed near the surface. The pink striped fighter performed some acrobatic maneuvers, but eventually I guided the fish into my net and observed the 20 incher in its lip. The skunking was avoided, and I silently congratulated myself for persistence and a hard earned reward. 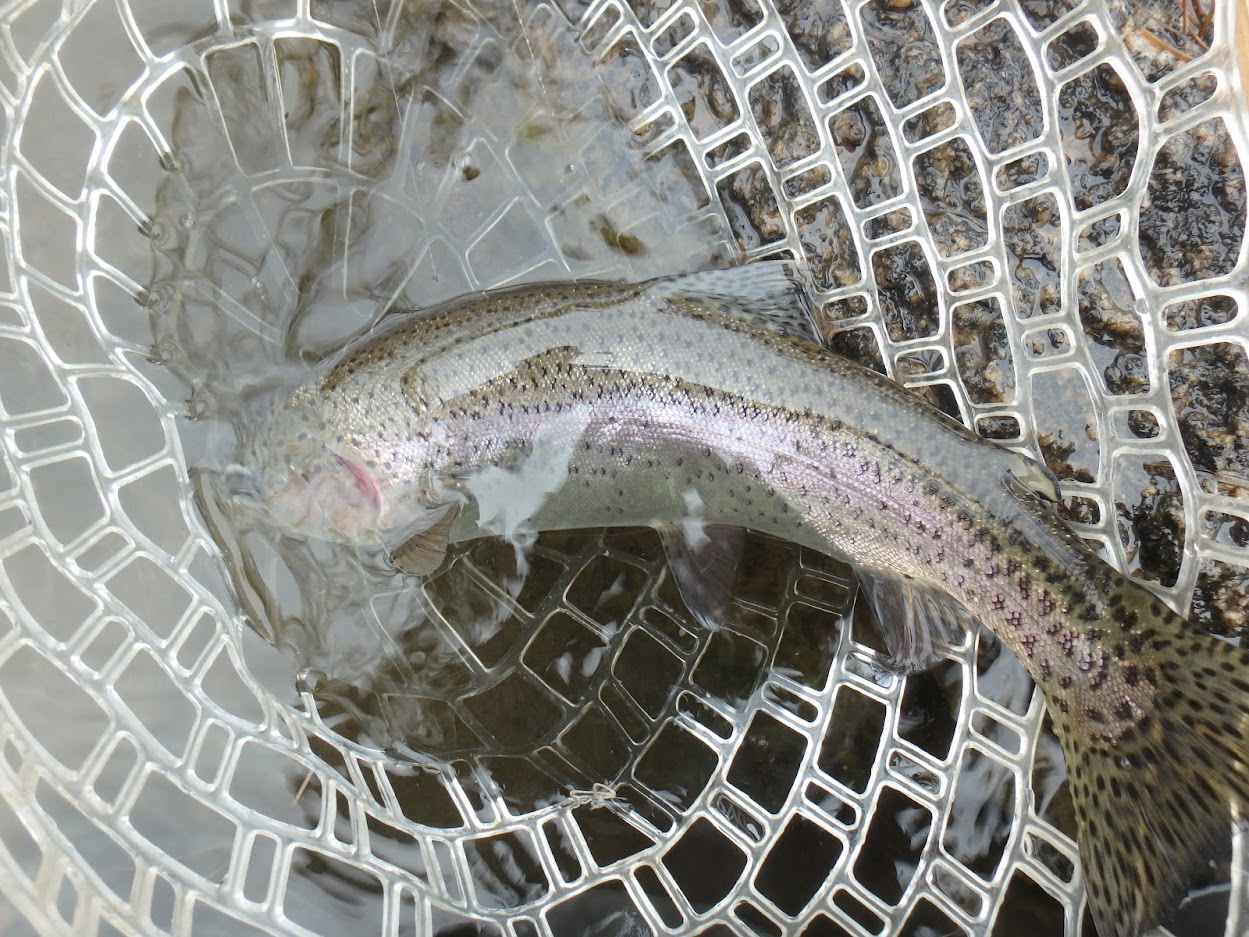 I continued probing the upper section of the pool, and on a subsequent cast I felt a jolt, as the flies began to swing at the downstream end of the drift. Again a rambunctious rainbow trout appeared, but once again I maintained tension and eventually slid my net beneath its swirling body. The second trout of the day was a mirror image of number one, but this specimen displayed the RS2 in its lip.

I worked my way down the pool for another ten minutes, and then I resumed my upstream progress. Just above the top of the pool a small relatively shallow shelf pool appeared, and although I judged it to be relatively marginal, I flicked a cast to the top. Imagine my amazement, when after a short drift I lifted to make sure that the flies were not hung up, and I found myself attached to a nine inch brown trout that gobbled the 20 incher. 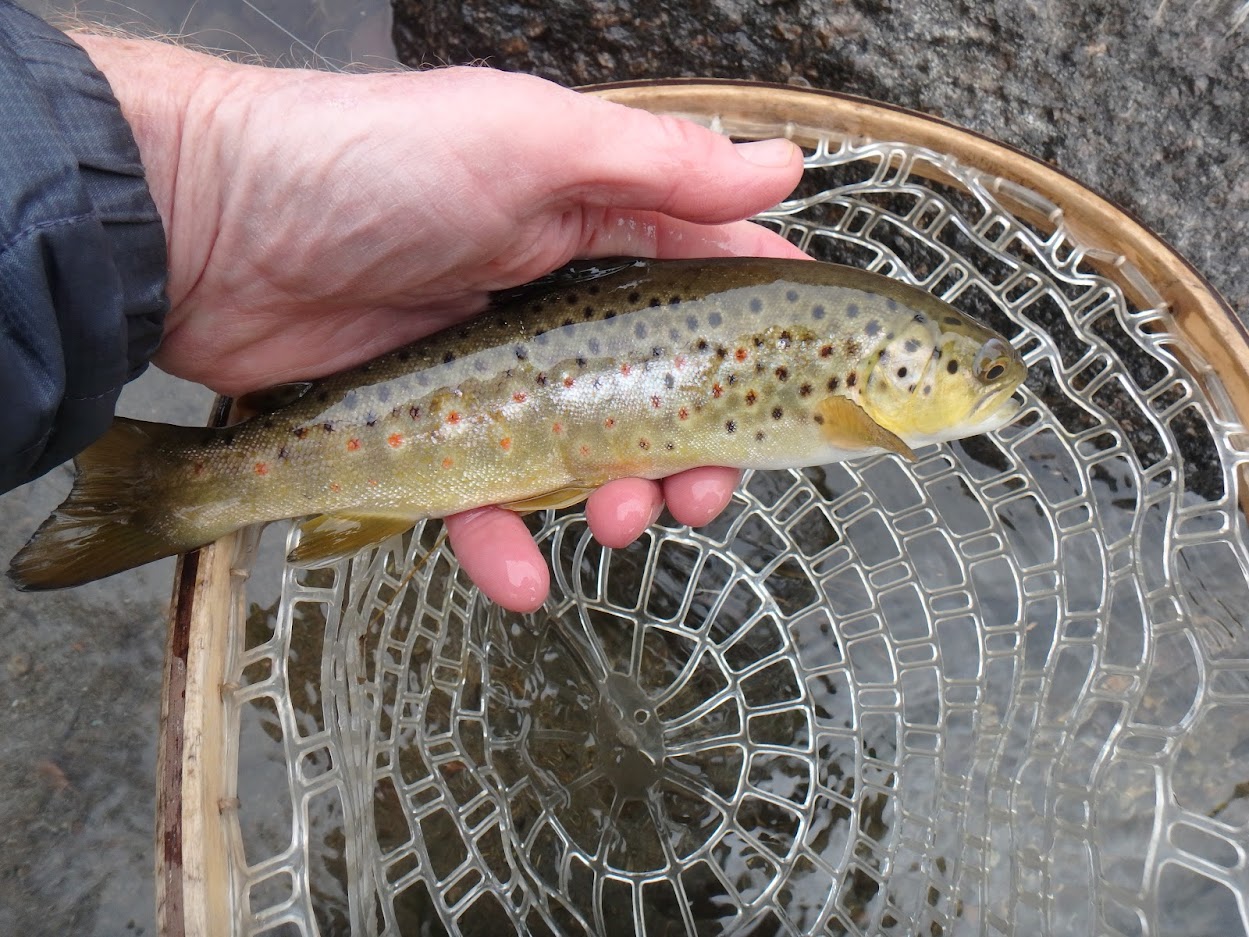 Happy for Any Size

I continued onward for another hour, and I thoroughly fished two additional first-class locations, but I was unable to recreate the magic of the tunnel pool. The sun broke through for a few short time periods, but for the most part a thin layer of clouds prevented significant warming. I suspect the temperature topped out in the fifty degree range, and my feet and fingers reminded me of the chilly circumstances. By 3PM my confidence once again plummeted, and this mental state when combined with my gnarled fingers and numb feet prompted me to return to the car to call it a day. 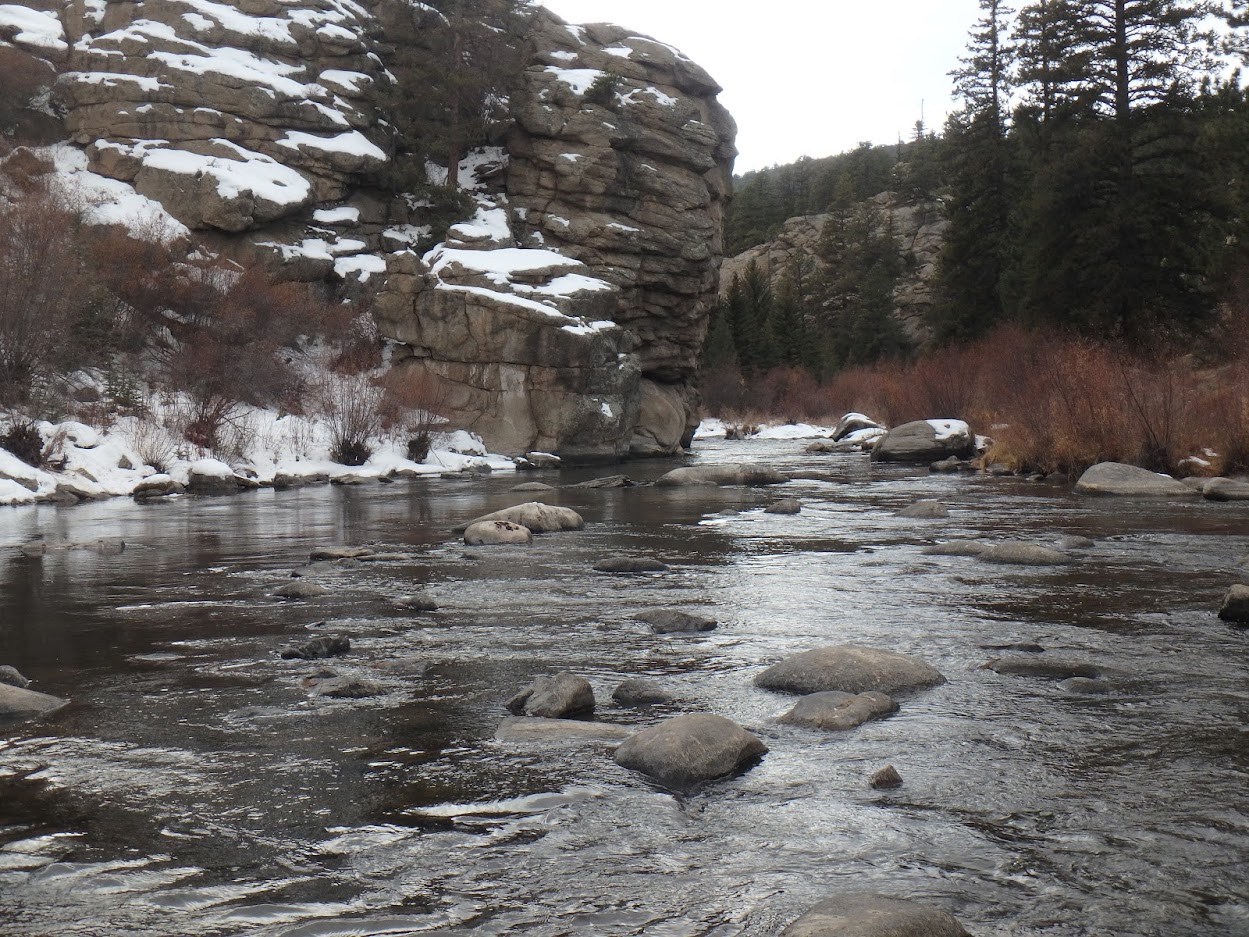 Last Hour Spent in This Area

My return hike necessitated two river crossings, and I utilized the same packed footsteps that aided my descent to climb to the road. Tuesday was a challenging day, but I am proud to report that I landed three trout and connected with two others. In retrospect I underestimated the impact of the narrow canyon and the temperature differential between Lake George and Eleven Mile Canyon. I enjoyed a day outside in the middle of November, and I avoided an injury in spite of the dangerous snow and ice conditions. I consider Tuesday, November 19, 2019 a success. 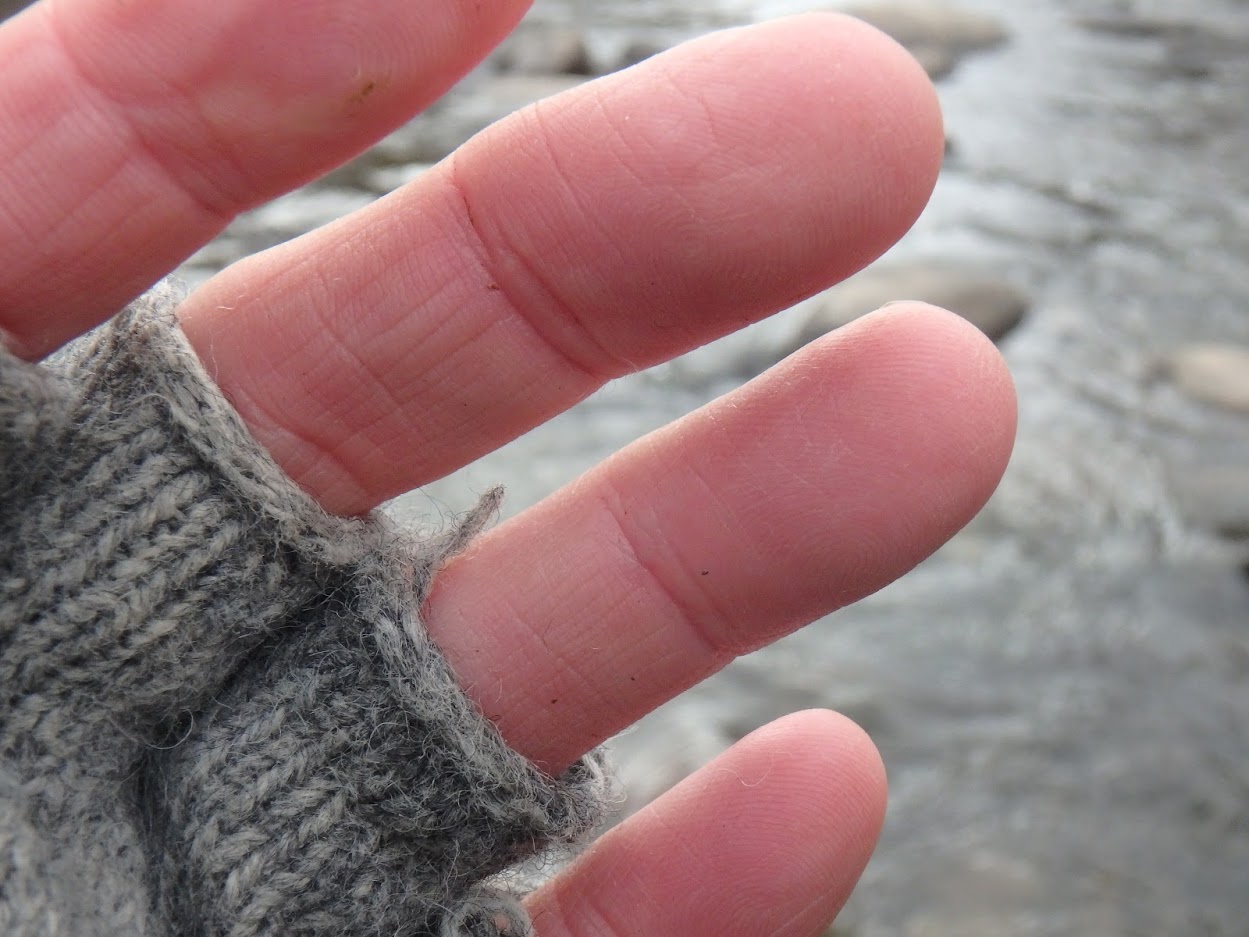