Tuesday’s outing on the South Platte River in Eleven Mile Canyon breaks down into two very different experiences. Between 11:00AM and 2:00PM I endured three hours of frustration. All my action for Tuesday was packed into the final hour.

The temperature in Denver was forecast to stretch into the mid-seventies, and the high for Lake George near the South Platte River was predicted to reach 62 degrees. The weather prognosticators were quite accurate based on my assessment after spending the late morning and afternoon in the area. The gauge for the South Platte River below Eleven Mile Reservoir is out of service, but I suspect the flows registered in the 60 CFS range. 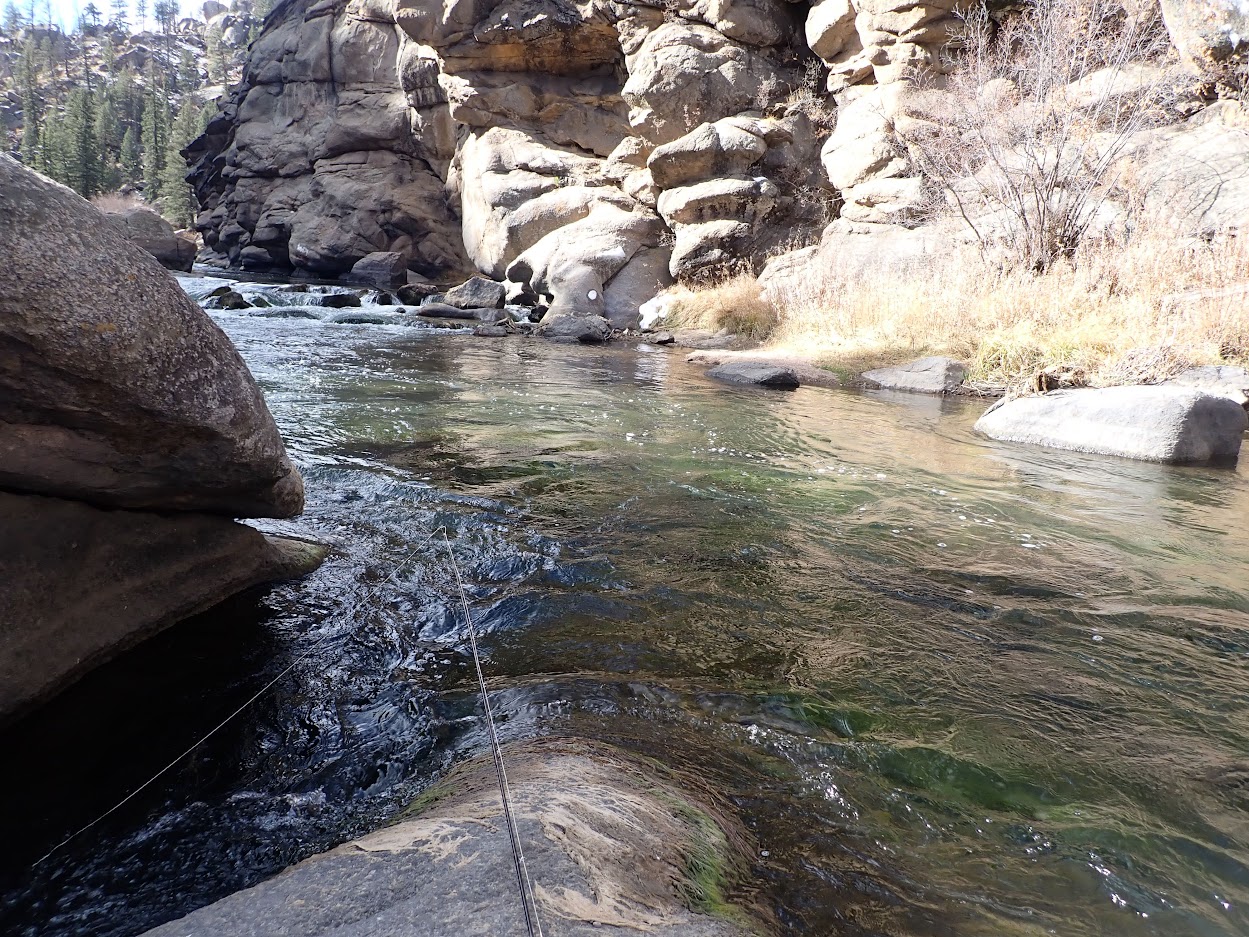 I arrived at a pullout by 10:30 and decided to explore an area outside the special regulation section. I geared up with the Sage four weight and pulled on my North Face light down coat to ward off the chill, while I began my quest for trout in shadows on the eastern side of the river. The steep canyon walls along the left side of the road blocked the low sun for much of the day, and a significant amount of snow remained from last weekend’s storm. The temperature when I began at 11:00 AM was in the low fifties.

I used my New Zealand indicator tool to attach a tuft of chartreuse poly to my line and then crimped a split shot above the last knot on the tippet. Beneath these nymphing accessories I knotted an orange-yellow yarn egg and a RS2. I prospected the deeper water over the next forty-five minutes, but evidence of local trout was absent. I began in some shadowed areas and quickly moved into a nice area bathed in sunlight, but neither produced even a nibble to my flies. I grew frustrated and decided to move to the special regulation area, where presumably a more dense population of trout existed. I theorized that the presence of more fish translated to a higher probability of success. 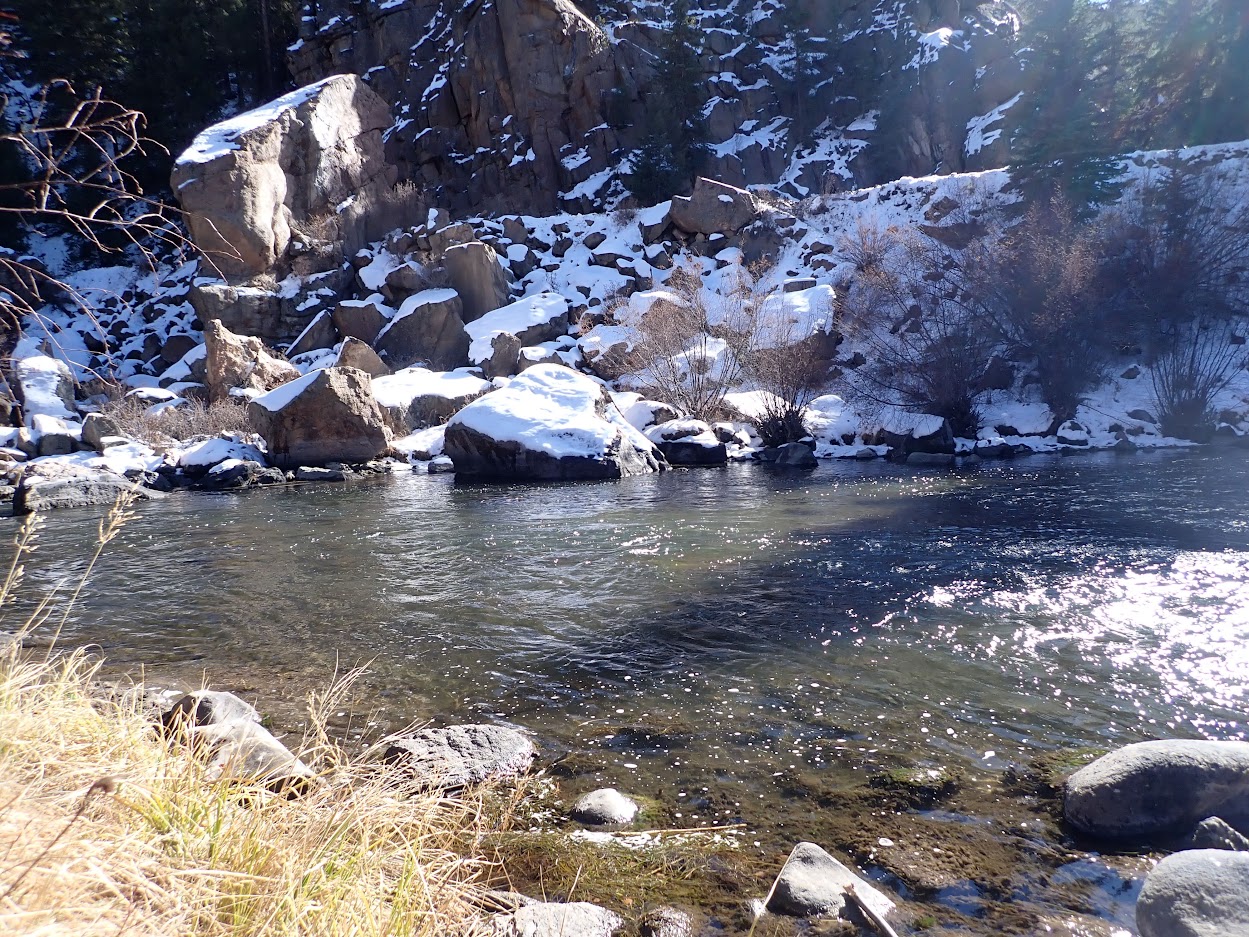 This Pool Earned a Few Casts

I drove up the canyon toward the dam to the area that I frequently fish, but all the parking spaces were occupied, so I reversed direction and parked .3 mile downstream from my usual spot. The bank in this area is quite steep, so I walked upstream, until I found a relatively gradual path covered with packed snow, and I carefully edged my way down to the river and then followed some footsteps through the snow to the first nice pool. Before I could unhook my line to make a cast, I spotted another angler, so I circled around him and approached a second favorite pool. Once again another fisherman was present, so I resumed my hike in the snow. The next pool was much smaller than the first two, but it was unoccupied, so I covered it thoroughly with my egg and RS2 combination. This cycle of bumping into other fishermen and casting to less desirable spots in between continued until 2:15PM, when my frustration reached its peak, and I decided to call it quits. The cold water from the dam numbed my feet, the fish were uncooperative, and in spite of these negatives, fishermen were everywhere. 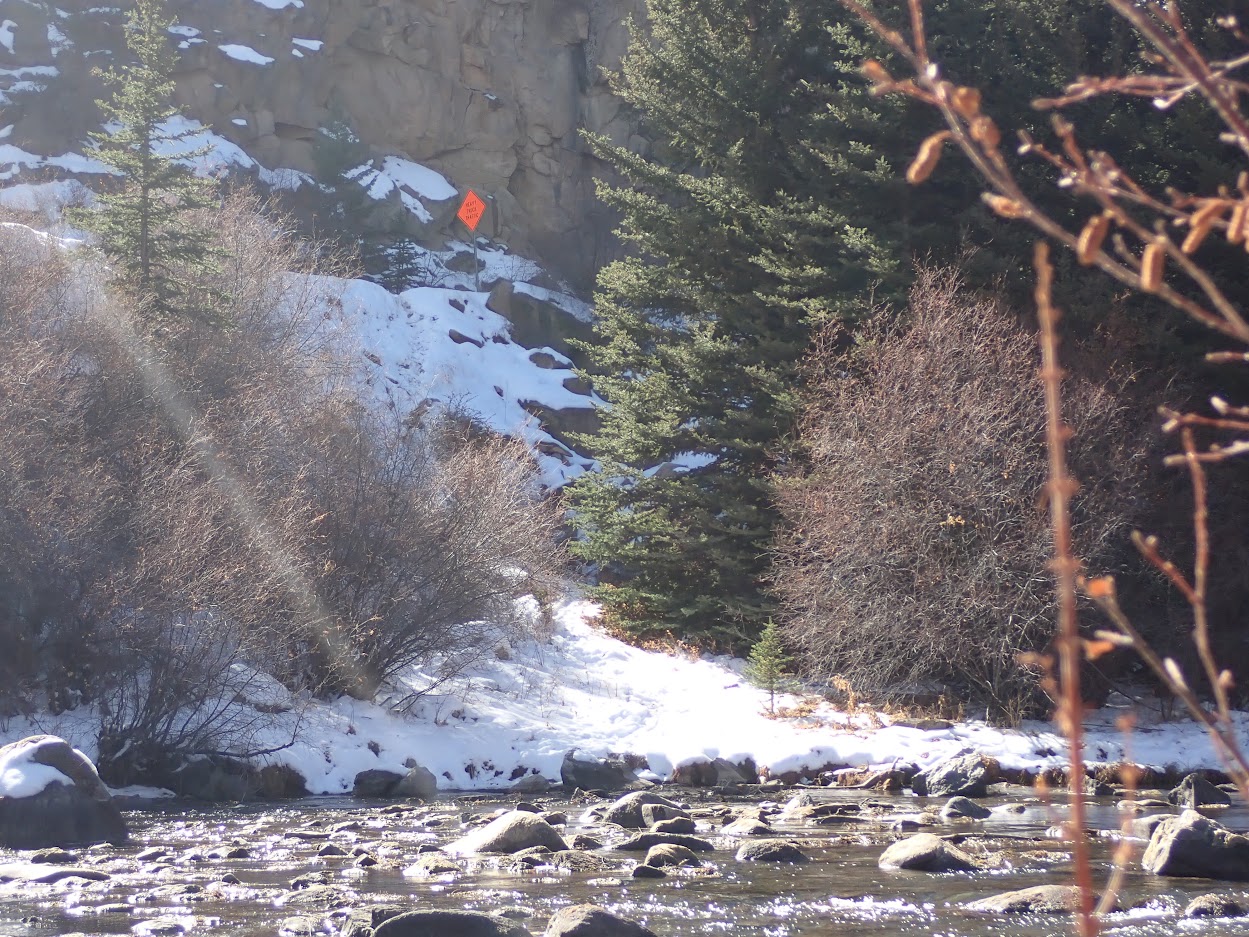 I climbed a steep snow packed trail to the road and hiked .4 miles to the Santa Fe. Rather than accept a skunking I decided to walk an additional .2 mile to a wide pullout above a huge long slow moving pool. Upon my arrival I noted that the entire area was vacant, so I scrambled down a jumble of snow covered rocks to the edge of the river one-third of the way from the downstream end of the pool. I slowly waded upstream along the left side while methodically scanning the bottom of the river for shadows or moving forms. Alas, my attempt to sight fish proved futile, as I never spotted a trout. I reversed direction with the intent of finding the snowy path to climb back to the road, but for some reason I decided to inspect the bottom one-third of the pool. Much to my surprise I began to observe sporadic rises directly across from my position and downstream. 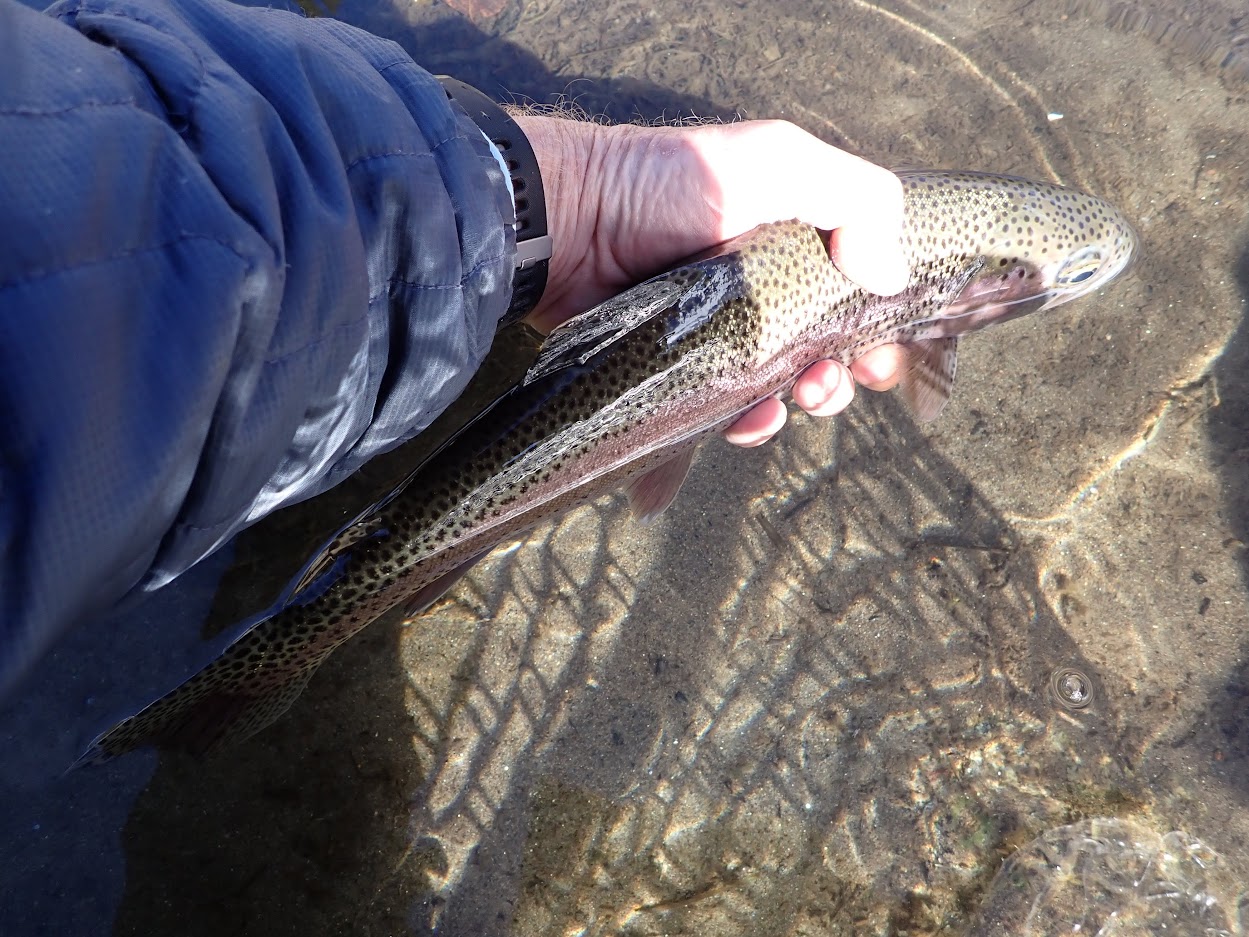 I watched for a few minutes, and the evidence of feeding fish convinced me to make a last ditch attempt to catch one. I patiently removed the strike indicator, split shot and two flies and knotted a size 24 CDC BWO to my line. I began delivering downstream casts to the feeding trout below my position, and nearly every drift was greeted with a small dimple, but my swift hook sets simply hurled the fly back in my direction. After ten minutes of frustration, I paused to evaluate and decided to switch to a size 22 soft hackle emerger with no bead. I applied floatant liberally to the body and began to cast. I fired a few casts to the small pod of fish directly across from me with no success, and then I turned my attention to the subtle feeders across and downstream. I began executing reach casts, so the fly line landed upstream of the fly, and on the fourth drift a fish bulged on the emerger. I responded with a lift and felt the underwhelming weight of a small brown trout. Since I was in skunk status, I quickly determined that it was six inches long and reluctantly added the small trout to my mental fish count log.

I turned my attention to several persistent risers downstream from the fish that I landed, and after quite a few fruitless casts, I connected with my best fish of the day, a fifteen inch rainbow. The slab ‘bow demonstrated some fine fighting techniques, but I eventually coaxed it into my net for a photo session. For the next forty-five minutes I persisted in my effort to fool pool risers, and I managed to add a fourteen inch rainbow to my fish count. The soft hackle emerger lost its allure, so I swapped it for a Klinkhammer BWO, and the small low riding baetis emerger imitation duped the third fish of the day. During this time period I also broke off a soft hackle emerger on a fish that felt heavier than any fish that occupied my net. I was not particularly happy about that turn of events. Also in the area across from me I connected with two fish that felt similar to the landed rainbows, but each managed to escape, before I could slide them into my net. 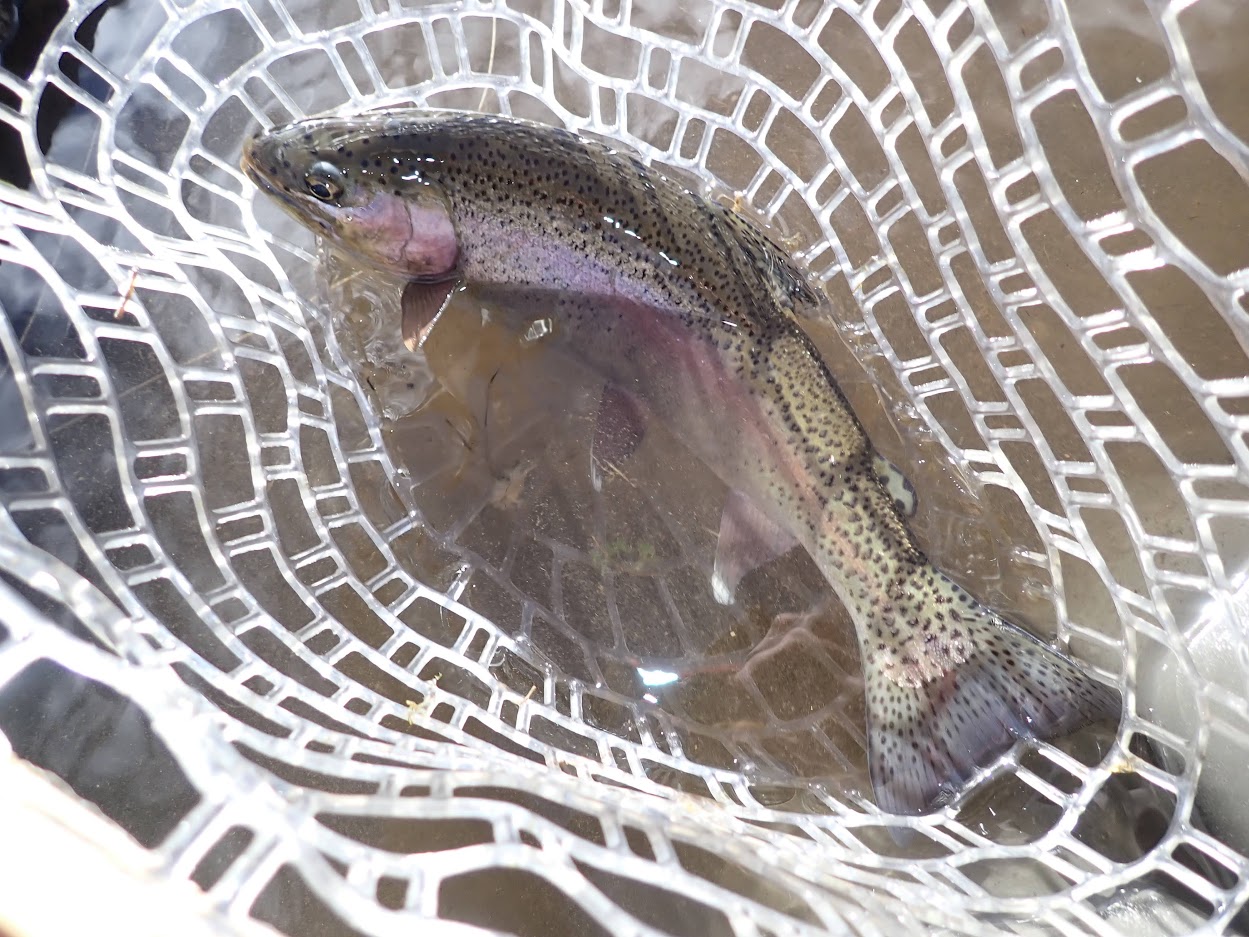 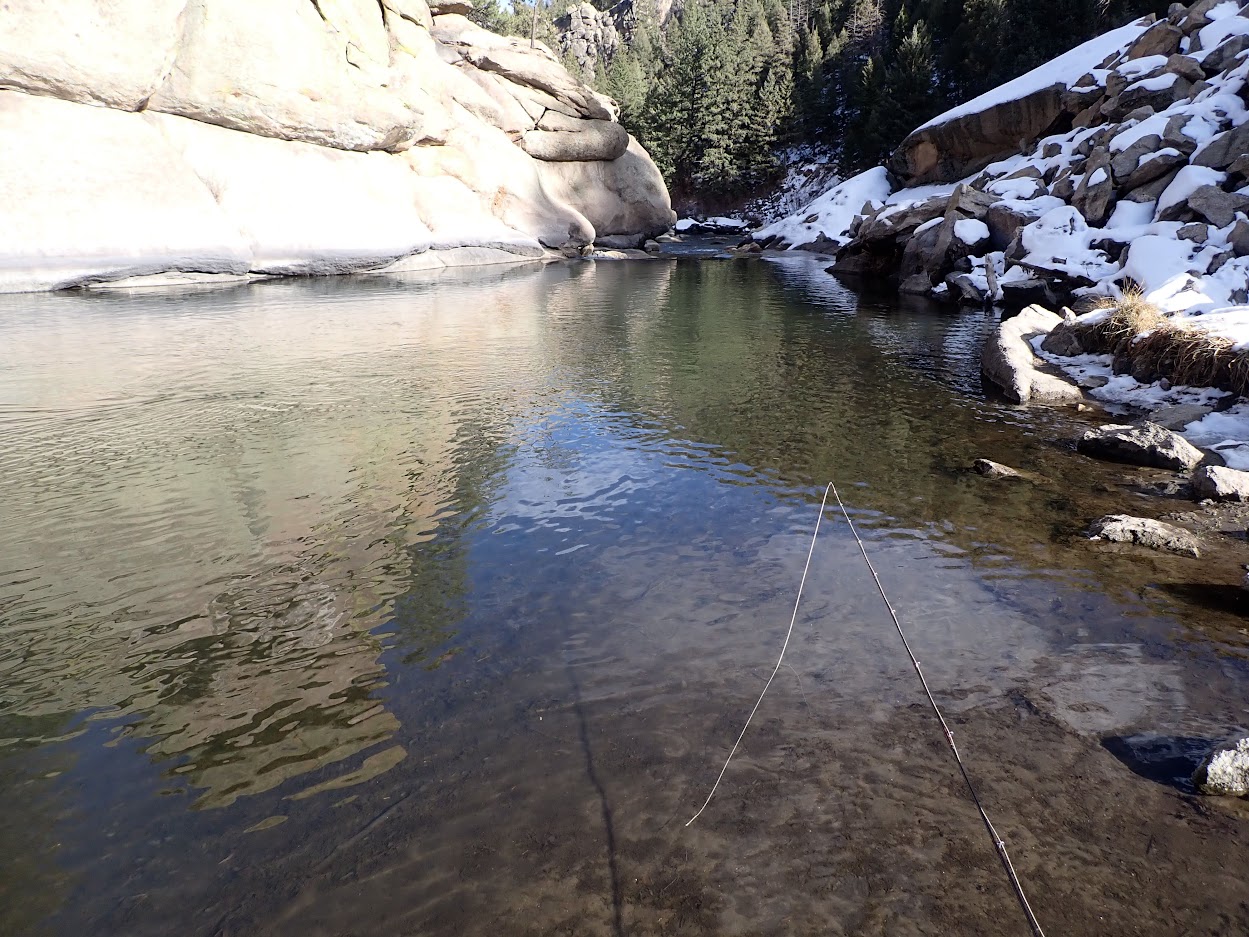 Downstream Drifts in the Bottom End of the Pool

My total time on the South Platte River was four hours, but approximately one hour was consumed by lunch, wading, walking and moving the car. Of the three hours of actual fly fishing, two were unproductive and frankly quite boring. I am not a big fan of fishing nymphs with an indicator, and doing so with low confidence translated to wandering thoughts and low expectations. The last hour of dry fly action salvaged my day and provided the opportunity to land six fish, although only three made it to my net. It was a nice day, and once I escaped the other fishermen, I focused on catching trout on dry flies in November. I cannot complain.