After my near skunking on the South Platte River in Eleven Mile Canyon on 10/01/2019, I desperately wanted another shot at redemption. I scheduled a return visit for 10/04/2019, but my fall on the Big Thompson River on 10/03/2019 scuttled that plan. Finally the weather and a day without commitments enabled me to visit the tailwater in South Park on 10/16/2019.

The temperature at the start of my fly fishing adventure was around fifty degrees, but sunshine and the lack of clouds allowed the air to warm up quickly, and it reached a high of around seventy degrees in the afternoon. In short, Wednesday developed into a glorious autumn day in Colorado. 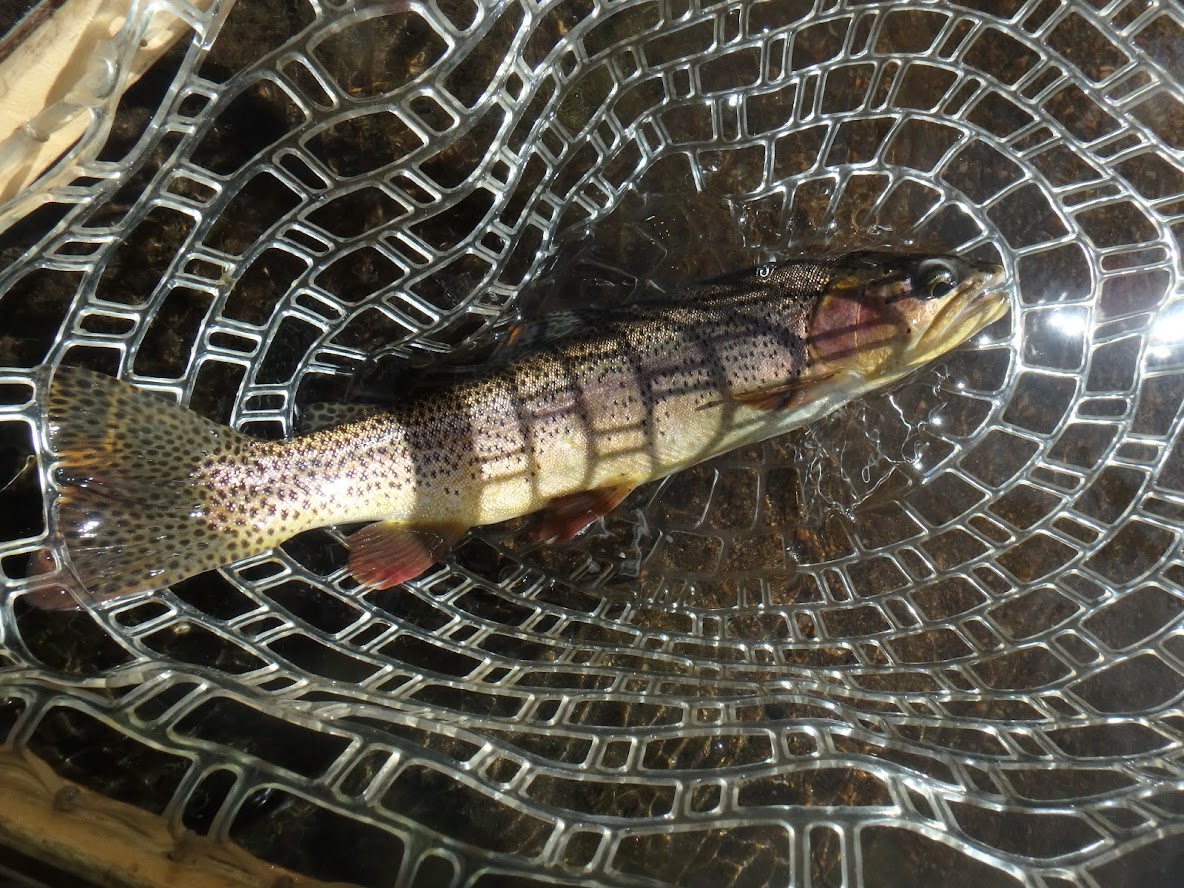 I decided to fish outside the special regulation area, as historically I enjoyed excellent results there. I suspect that fly fishermen are drawn to the catch and release water and ignore the open stretches under the assumption that the bait fishermen harvest the best fish. As a devoted contrarian I suspect that the spin casters bypass very productive sections of harder to fish pocket water, and these stretches are tailored to my style of fishing. 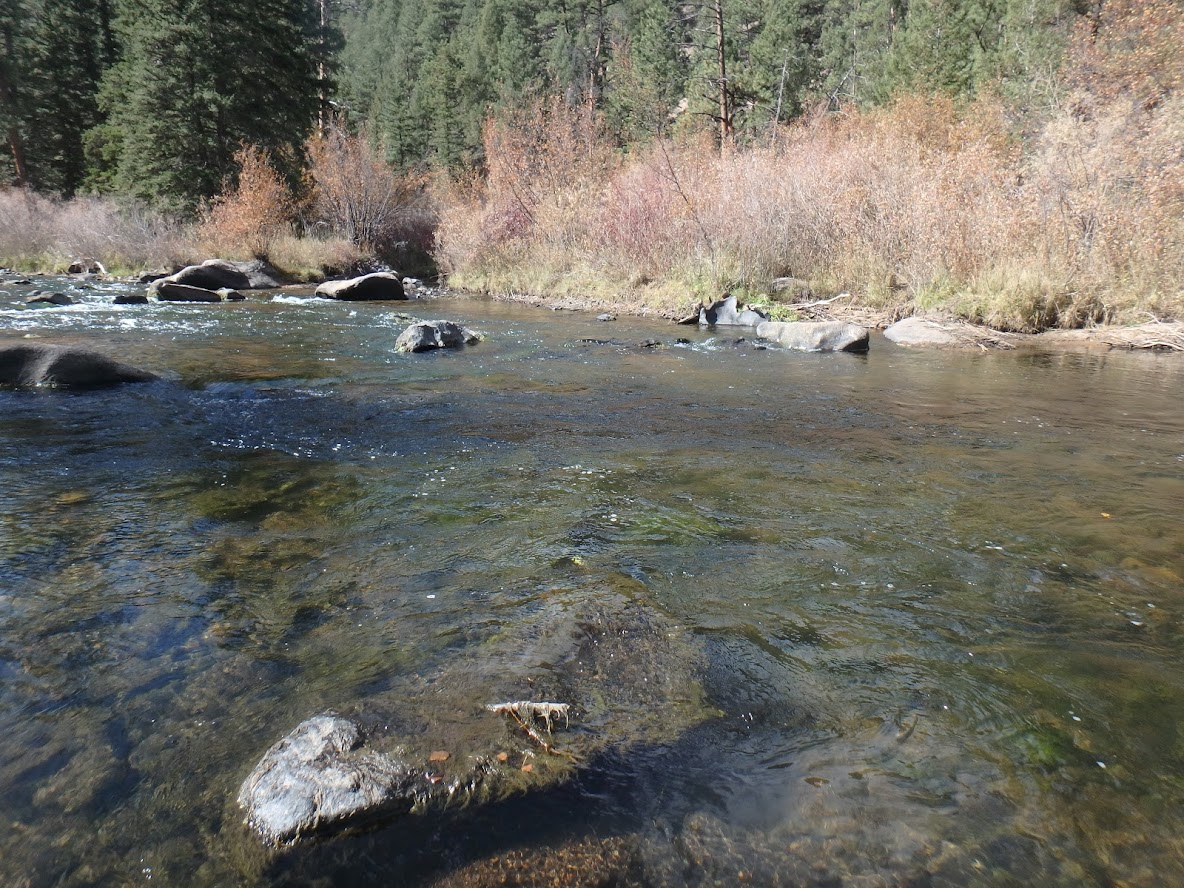 Flows were 66 CFS on Wednesday, and the water was extremely clear. These conditions were more challenging than usual for the South Platte River, and the skittish behavior of the fish attested to the demanding circumstances. 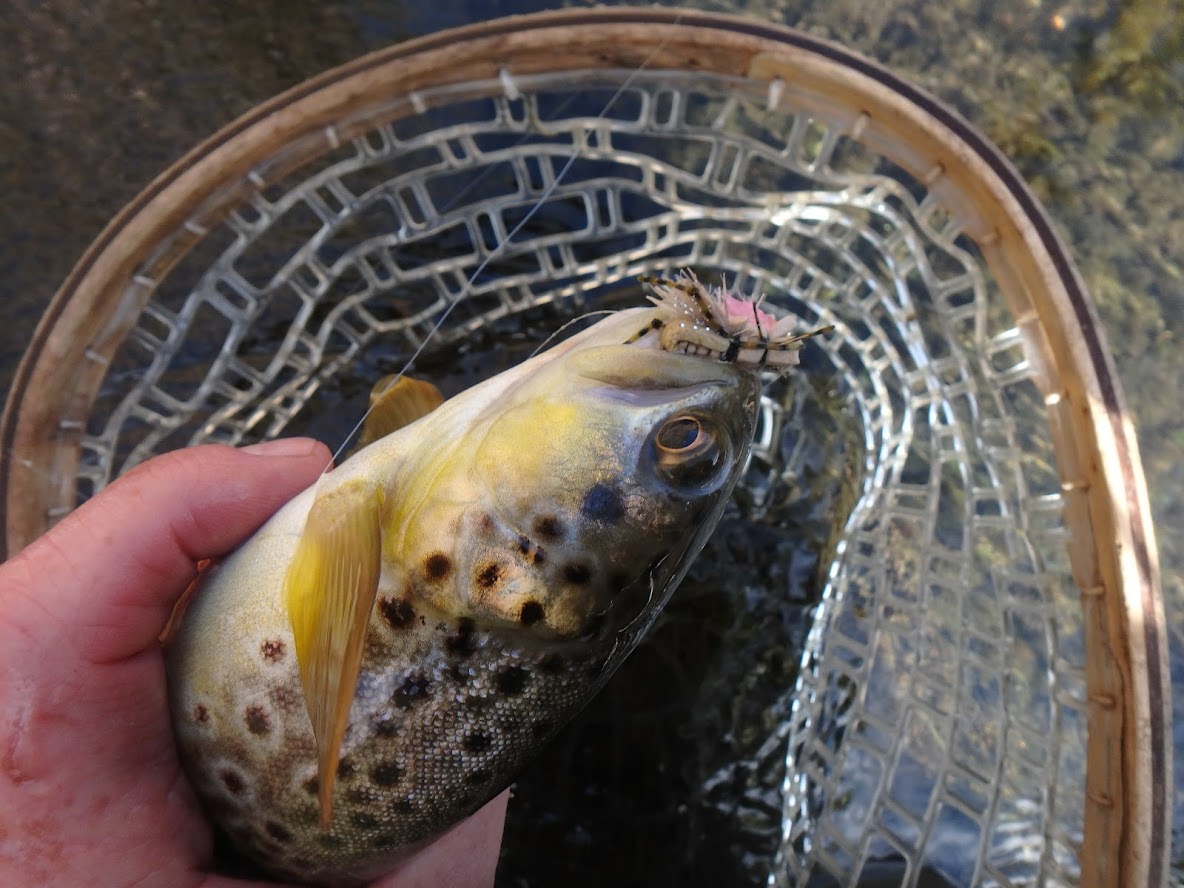 I began with a tan pool toy hopper, and beneath it I tied a salvation nymph and beadhead soft hackle emerger. The salvation was intended to be an attractor nymph, and the soft hackle emerger anticipated a blue winged olive emergence. The hopper and salvation were consistent members of my lineup throughout the day; however, the soft hackle emerger was exchanged for a beadhead hares ear nymph in the early going. A slow period after lunch prompted me to swap the hares ear for a 20 incher. In both cases I sensed that my flies were not getting deep enough, and increasing the size and weight of one of the nymphs was a response to this concern. Over the course of the day the pool toy hopper duped five trout, and the salvation nymph accounted for the remainder. The hares ear nymph and 20 incher simply served the role of a split shot. Nevertheless I was certain that the addition of a heaver fly was key to my level of success. 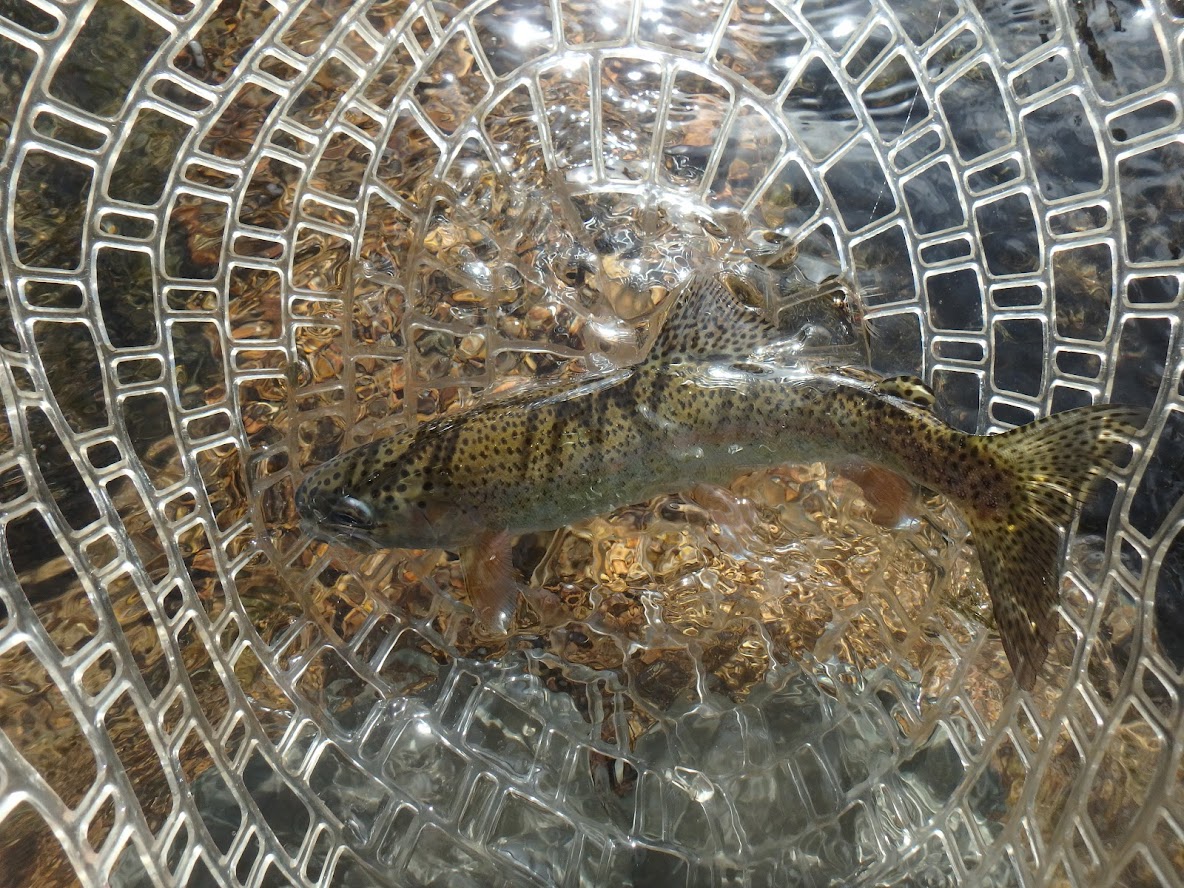 By the end of the day I managed to land twenty trout, but achieving this total was a test of my persistence and ability to make adjustments. I spooked untold numbers of trout in the slower moving pools, and I debated moving to a small single dry at times but never pulled the trigger. Instead I elevated my stealth and skipped around most of the smooth areas, where the river residents were on high alert and were extremely particular about their choice of a meal. 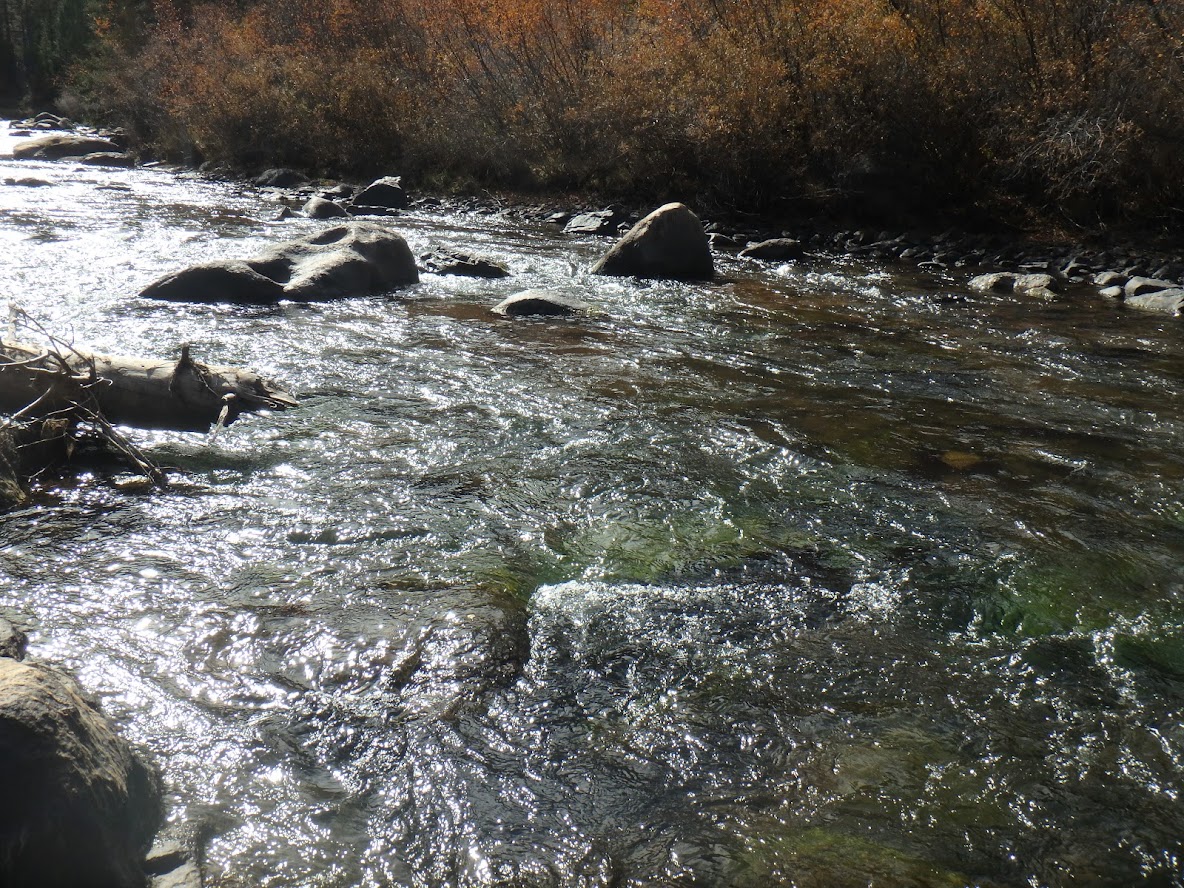 The Type of Water That Produced

I also monitored the type of water that yielded the most success and devoted my energies to places with matching structure. Medium velocity riffles of moderate depth were the ticket, and several spots that matched this description produced multiple trout. The hopper paused or stopped on occasion after an upstream cast and dead drift, but more often a hungry trout attacked the salvation during a swing at the end of a drift, or when I lifted the flies to execute another cast. 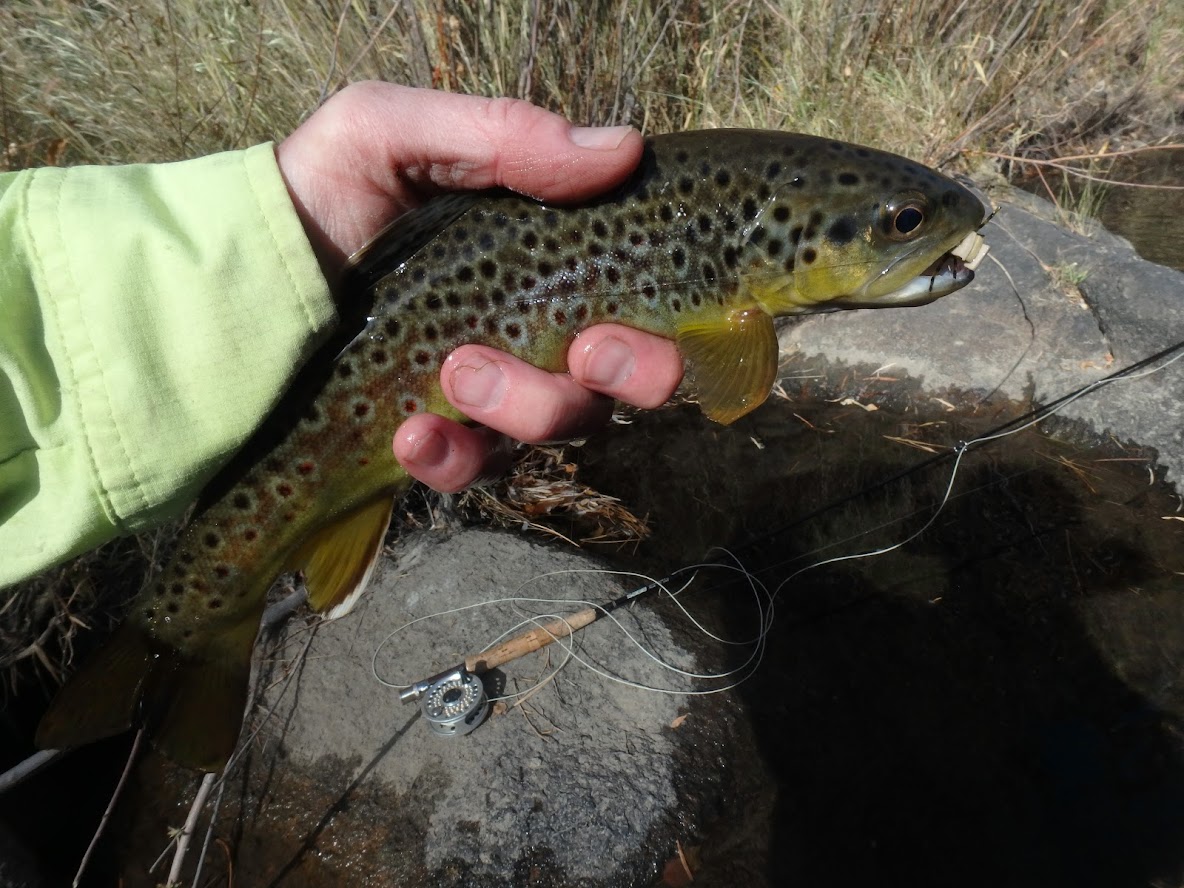 Of the twenty fish that visited my net, two were rainbows, and the rest were brown trout. I spotted two sets of trout in the spawning act, and I suspect this activity curtailed feeding by the larger, mature browns. The largest brown trout landed were likely in the eleven to twelve inch range, and this size range was small compared to my usual experience on this stretch of the river.

In summary I managed to land twenty fish on a gorgeous fall day in October. I demonstrated flexibility and adjusted to the tougher than normal conditions. I modified the weight of my offerings, exercised caution, analyzed the water type and applied that knowledge to my prospecting strategy. Hopefully periods of mild weather will enable me to extend the season for another month.