My euphoria from a splendid day of fly fishing with my son on Sunday barely subsided, when I found myself consumed by the same exhilaration on Thursday, October 4. My elevated state of bliss resulted from a day of fly fishing on the South Platte River, and it was not entirely attributable to fishing results.

The fishing trip actually began on Tuesday, when my lovely wife joined me for a drive to Woodland Park, CO. Along the way we stopped at Colorado Mountain Brewing for a tasty craft beer and a wonderful dinner, while we watched the first three innings of the Rockies vs Cubs National League Wildcard game. The Rockies jumped out to a 1 – 0 lead in the first inning.

The game progressed to the fifth inning by the time we checked into the Country Lodge in Woodland Park. Once we settled into our room, Jane and I were glued to the television until 11:30PM, when the Colorado Rockies scored a second run and advanced to the NLDS. What a game! The Rockies demonstrated a high degree of grit before a national television audience, and it will be interesting to follow their Rocktober adventure. 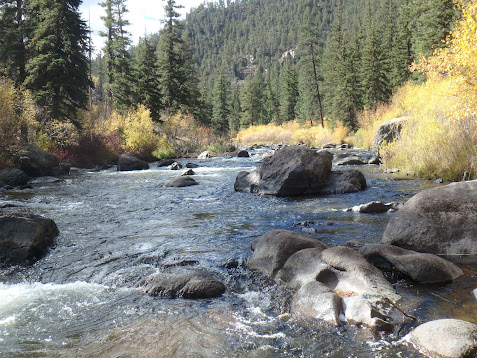 On Wednesday morning after breakfast Jane and I continued to the South Platte River. The morning temperature was already in the upper fifties, and that was pleasant for an October morning at high elevation near Lake George. The thermometer elevated from there, until it peaked in the low seventies, and the warm rays of the sun combined with the glowing yellow leaves on the aspen trees to create outdoor perfection. The Rockies’ win, the fall foliage, the warm temperatures and the companionship of my wife were enough to create a memorable day on October 3; and the fly fishing had not yet begun.

I donned my waders and rigged my Orvis Access four weight (still pampering my elbow), while Jane organized her blanket, stadium seat, and reading materials. Finally I was ready to plunge into the South Platte River. The flows were nearly ideal at 106 CFS, and this level enabled comfortable wading, yet was high enough to allow reasonably close approaches without spooking trout. The weather and near optimal flows raised my optimism, as I began casting at 10:30AM.

I began my search for hungry fish with a tan pool toy hopper, beadhead hares ear nymph and ultra zug bug; and in a short amount of time I landed three small brown trout. All three chowed down on the ultra zug bug, and I remained optimistic, although several nice long runs of moderate depth failed to produce trout. The catch rate continued at a steady rate for the remainder of the morning, although after thirty minutes with no action on the hares ear, I moved the ultra zug bug to the top position and added a salvation nymph on the point. The change seemed to improve the performance of my fly lineup, and the salvation produced one out of every four fish landed. 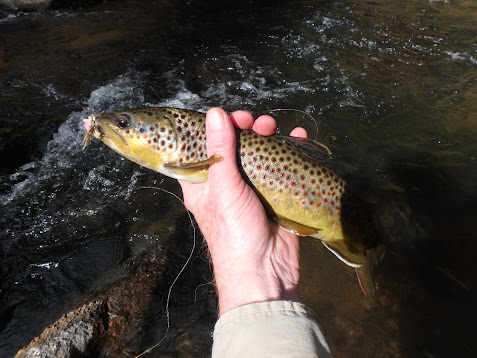 One of the nicest fish of the day crushed the pool toy in a swirly small pocket, and that was a pleasant surprise. Initially I devoted a fair amount of time to seams along deep runs, but eventually I concluded that the type of water that yielded abundant quantities of fish in the spring was not productive in the fall. Pockets and riffles of moderate depth provided reliable action during the two hour period between 10:30AM and my lunch break at 12:30, as the fish counter mounted to eighteen. Aside from the twelve inch pool toy crusher, most of the fish averaged in the nine to eleven inch range. Wednesday was a day of quantity over quality.

I continued with the same lineup of flies that delivered success before lunch in the early afternoon, and these offerings allowed me to increment the fish tally to twenty-two. The pace of action seemed to slow a bit; however, and I spotted quite a few very small blue winged olives, so I exchanged the salvation nymph for a sparkle wing RS2. I speculated that the fish were now selective to active baetis nymphs and emergers. 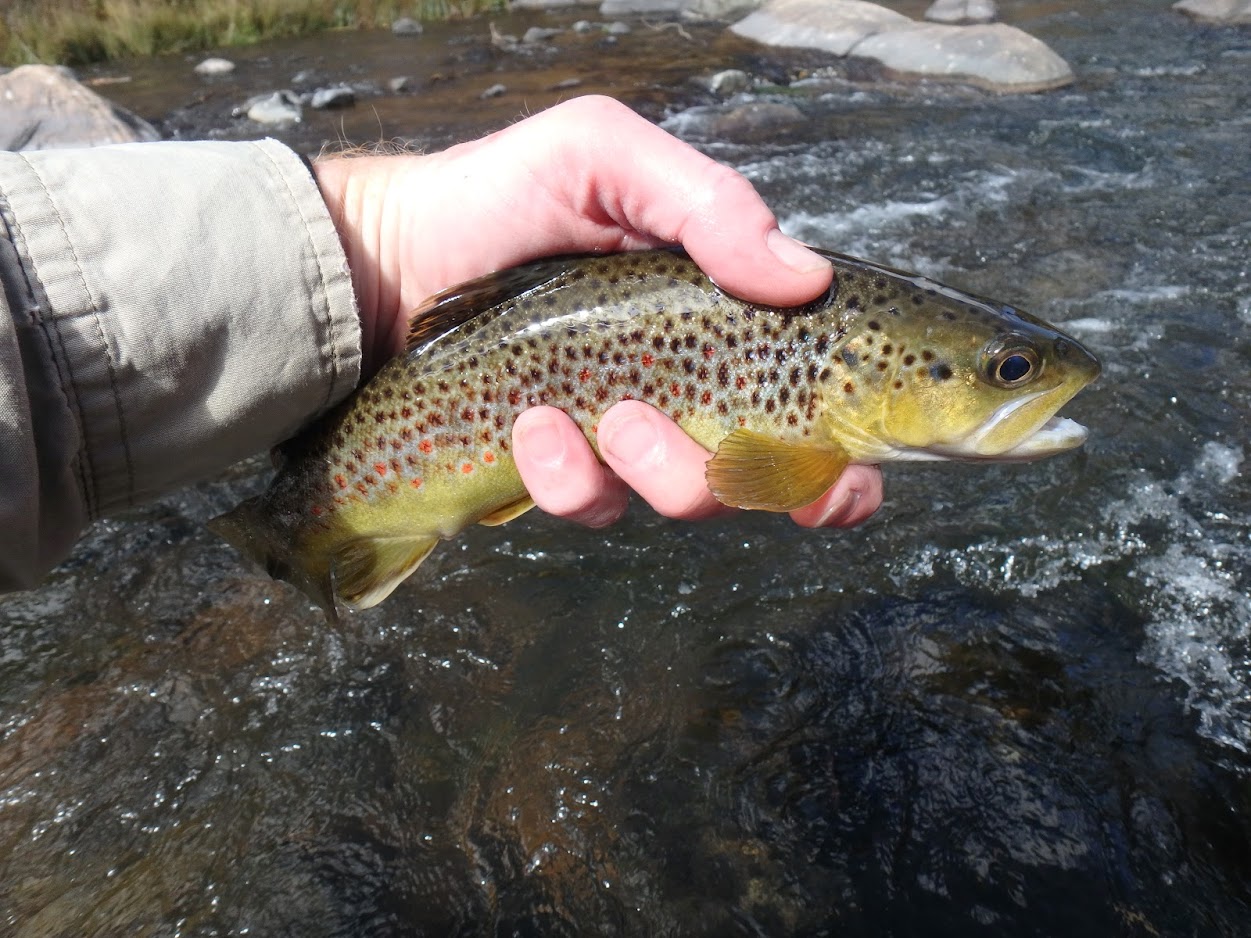 My reasoning was sound, but the results never substantiated my hypothesis. I landed a few opportunistic feeders that nabbed the ultra zug bug, and during one of these net and release episodes, the sparkle wing RS2 broke off. I stubbornly clung to my belief that blue winged olive nymphs would be a hot food item, and I replaced the sparkle wing with a Craven soft hackle emerger. This swap paid off somewhat, when a pair of eleven inch brown trout grabbed the trailing emerger in some relatively shallow riffle sections. I could now claim that my small nymph strategy was affirmed, but I continued to sense that I was passing over numerous quality lies that contained quantities of fish that ignored my offerings.

During this time another factor entered my thinking. Perhaps the additional weight of the larger and heavier salvation enabled the nymphs to drift lower and slower in the water column, and this in turn made them more available to the trout. At 1:30PM I reverted to the salvation nymph, and for the remainder of the afternoon I chucked the pool toy, ultra zug bug, and salvation. The three fly lineup delivered in a big way, and the fish count zoomed to forty-two by the time I hooked the salvation to the rod guide and returned to meet Jane at her base camp location. 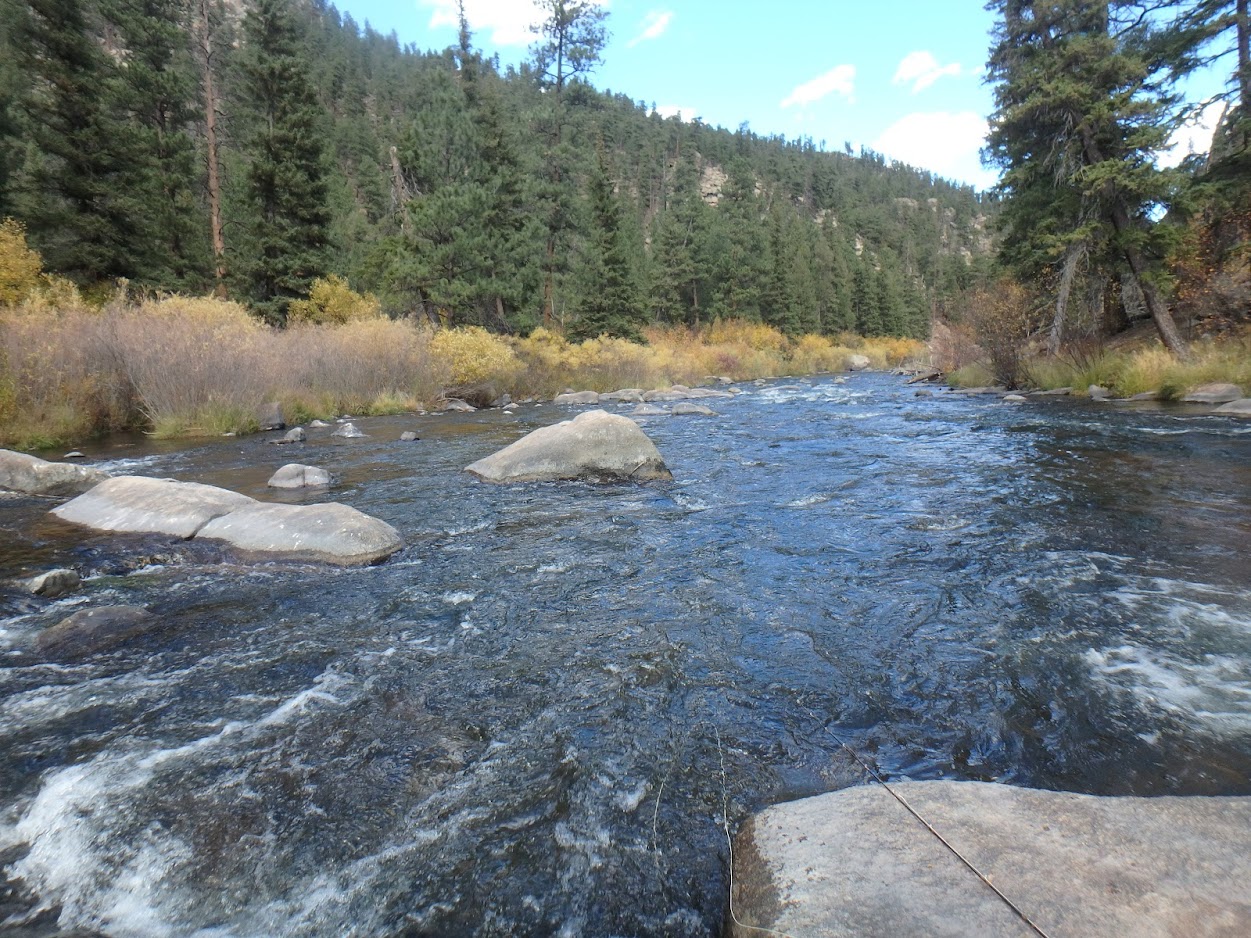 During the last hour I experienced the type of action that fuels my passion for the sport of fly fishing. I reached a location where the river split around a very long island, and I chose to prospect the right braid. The flow in the right channel was twice that of the left, and most of the attractive water bordered the right bank next to a fisherman path. A series of long riffle sections that spanned fifteen feet in width presented themselves, and I approached each from the side and maintained a twenty foot distance. I executed short casts and held my rod high to keep the fly line off the water and allowed the three fly set up to drift through the gut of the riffle. In many cases an aggressive brown trout latched on to one of the nymphs in the mid-section, and quite often an aggressive feeder snatched one of the flies, as they began to swing and lift at the tail. Fishing in this way was great fun, as I was confident that fish held in each of these water types, but their size and ambush point were always surprises. I estimate that fifteen of my daily catch originated during this time frame and in the right braid next to the island.

Hot fishing, glorious scenery, balmy weather and the companionship of my lovely wife elevated Wednesday to a memorable day in 2018. A Rockies’ win was icing on the cake.