Location: From Deckers upstream to parking lot around the bend

The days were approaching their longest length, and I had a new fly rod begging to be tested so I packed all my fishing gear in the Santa Fe on Tuesday morning and planned to drive directly from work to the South Platte River in the Deckers area. The plan worked reasonably well and I arrived at the first parking lot on the dirt road that heads straight from Deckers and was ready to fish by 5PM. Some large dark clouds appeared in the western sky and it seemed much later in the evening than it actually was. 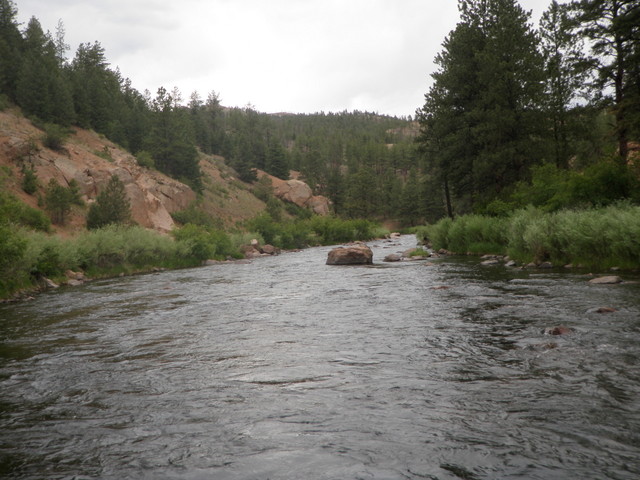 I walked down the dirt road a good distance until I was just above the large pool by the bridge at Deckers. Another fisherman was on the opposite shore at the top of the pool, so I decided to drop down to the river fifty yards above him, even though I was on the opposite bank. I began fishing with an orange scud and bright green caddis pupa on a nymph set up with an indicator and split shot and began covering all the deeper slots and runs for 20 yards or so. Nothing was doing. I switched out the orange scud for a San Juan worm and continued but still no action. I also tried a beadhead hares ear and beadhead pheasant tail on the nymphing tandem.

After covering quite a bit of nice water with no results, I elected to go with a dry/dropper setup as the water wasn’t excessively deep. I began with a yellow Letort hopper and dangled a bright green caddis pupa as well as a beadhead hares ear, but these combinations were equally ineffective.

Toward the latter part of the evening, I clipped off the hopper and nymph and went with a muggly caddis and then a light gray deer hair caddis and finally an olive brown deer hair caddis. Frustrated with the lack of success with these dries, I resorted to fishing classic wet fly style. I just read an article in Fly Tyer about situations when wet flies work when nothing else produces. I was in that very situation. I tied on a beadhead bright green caddis as the top fly and an old hares ear wet fly at the point and began cast across and letting the tandem sweep down and across below me. I did this without the aid of a strike indicator, but alas this also proved to be fruitless. I removed the hares ear wet fly and replaced with an olive and black woolly bugger and imparted action, but this also was not effective.

My last tactic was to stop and watch the water for any signs of rising fish. This actually worked as I was on a large rock overlooking the river and there were some beautiful slower moving areas opposite me and the main current. I saw two separate rises toward the tail so I tied the caddis back on and placed numerous casts in the area, again to no avail. I decided to flick some casts to a small current that fed the pool and on one of these drifts a fish rose in the small current area. I set the hook thinking it was on my fly, but that was not the case. Either the fish took a real natural next to my fly or I witnessed a refusal. 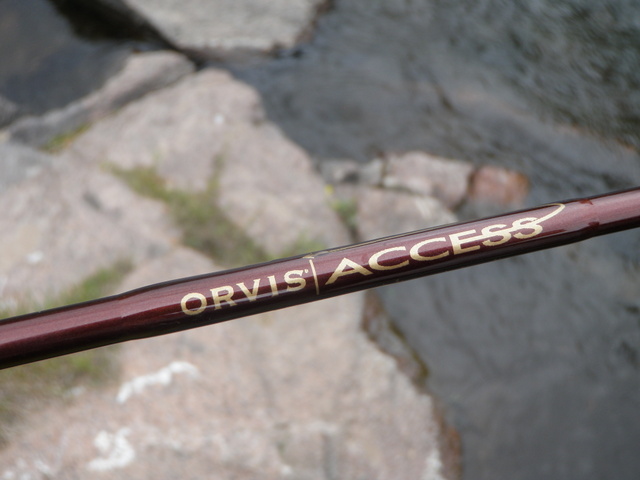 After attempting a few more casts to the area with sporadic rises, I decided to reel in and call it an evening. My feet felt like stumps from standing in the icy tailwater flows. The Orvis Access is light yet stiff and casts quite well, but I still don’t know how it feels to have the weight of fish on the new rod.