My last three outings on the Yampa, Eagle and Arkansas River involved challenging wading; and I was yearning for some normal flows on Wednesday, June 20. I camped at Vallie Bridge along the Arkansas River, and my results on Tuesday were fair but not favorable enough to encourage another day on the large river below Salida. I considered my options and decided to make the drive to Eleven Mile Canyon and the dependable tailwater that calls the boulder strewn valley its home. 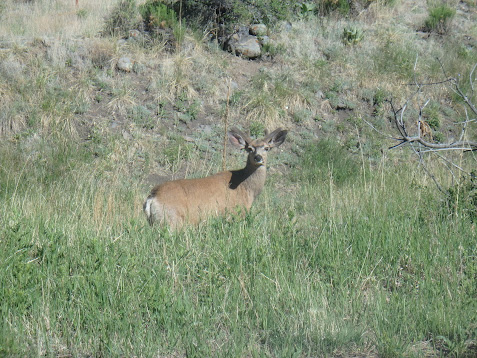 When I checked the flows prior to my two day and one night road trip, the South Platte River in Eleven Mile was tumbling along at 108 CFS. This level was higher than that which I experienced on earlier trips, but the volume remained well within a comfortable range for June fly fishing. In fact the higher flows were welcome in light of the early June heat wave that settled over Colorado. 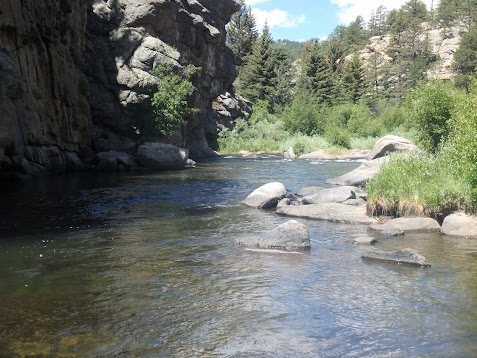 The eastern route that I chose followed the Arkansas River until just before Royal Gorge, where I turned on to CO 67 and headed to Florissant and an intersection with US 24. A short drive west delivered me to Lake George, CO, and after paying my senior day pass fee, I rumbled south on the dirt road that follows the South Platte River. I chose to fish near the midway point in the special regulation section.

The air temperature elevated quickly into the seventies, and by the time I quit at 3:30 the sun was overhead and provided enough radiant energy to cause a surge in the thermometer to eighty degrees. I assembled my Sage four weight rod and pulled on my waders, and then I descended a steep bank to the edge of the river. It was indeed very clear and tumbled along at the nearly ideal pace of 108 CFS. Another angler occupied one of my favorite pools fifty yards below me, so I crossed to a small narrow island and worked my way downstream to the north braid at a point, where I remained out of sight to the other fisherman. 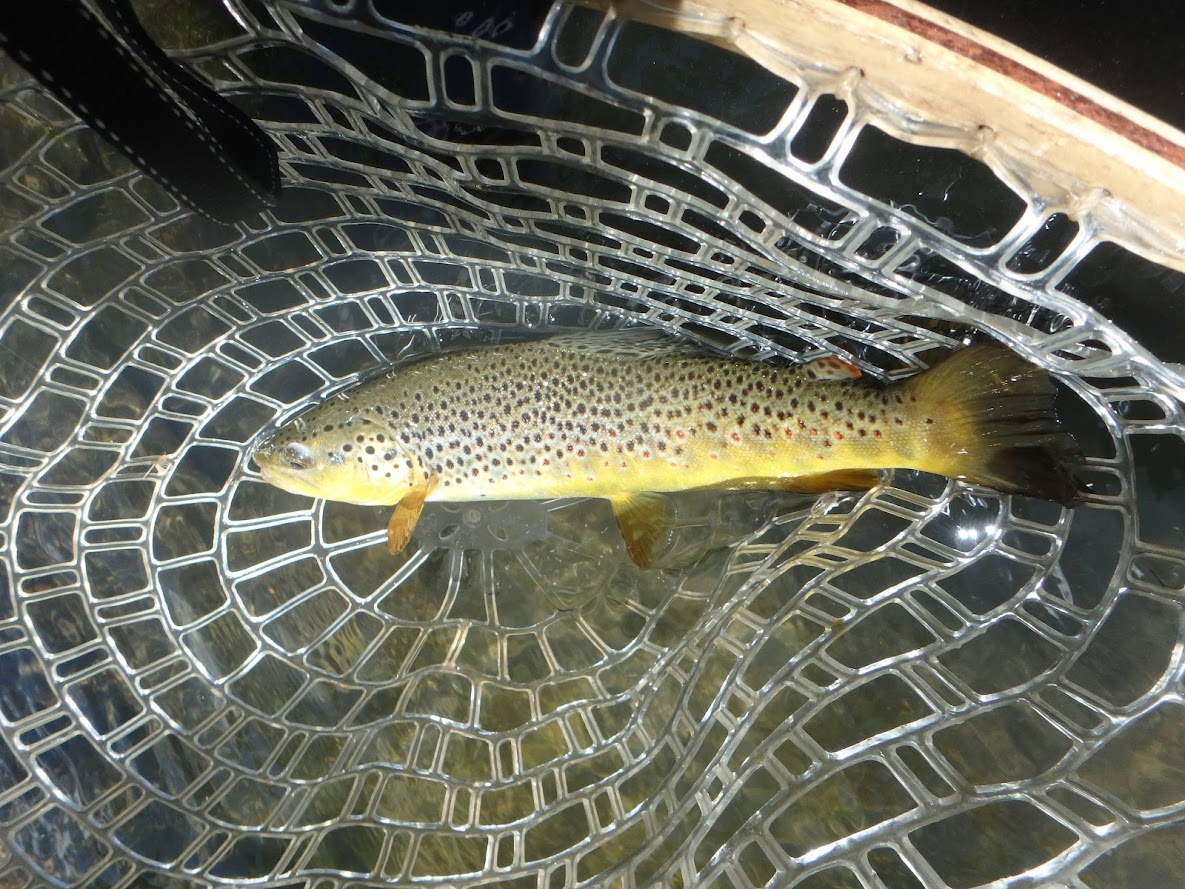 On the Board with This Yellow Beauty 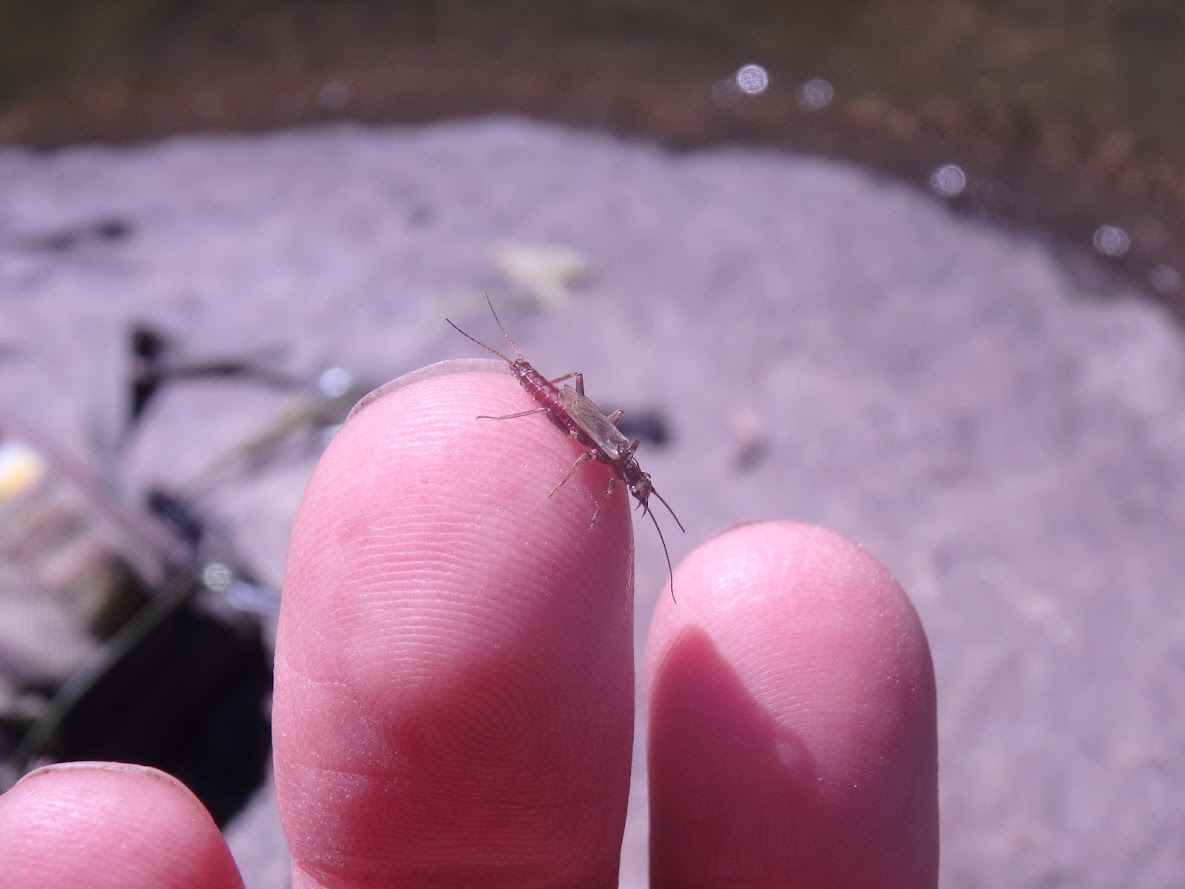 I knotted a yellow fat Albert to my line followed by an iron sally and salvation nymph, and I began to prospect the likely deep runs and pockets, as I progressed upstream. This approach allowed me to net two trout in the eleven inch range, before I encountered a beautiful long smooth pool next to a huge vertical rock wall. The dry/dropper method failed to entice sighted fish in the slow moving pool, and as I paused to consider my options, I began to notice some size 16 mayflies, as they slowly fluttered skyward from the river’s surface. 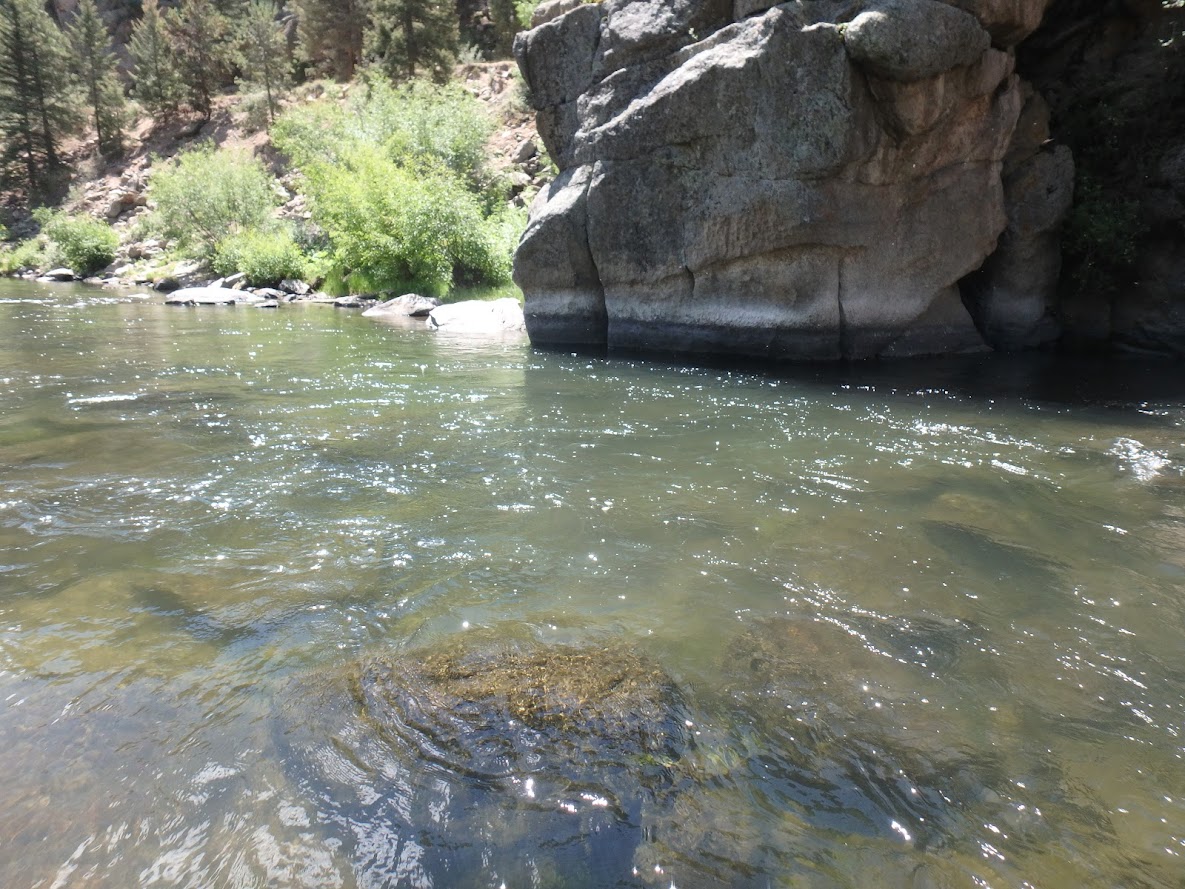 Two Risers Were Near the Bottom of the Large Rock 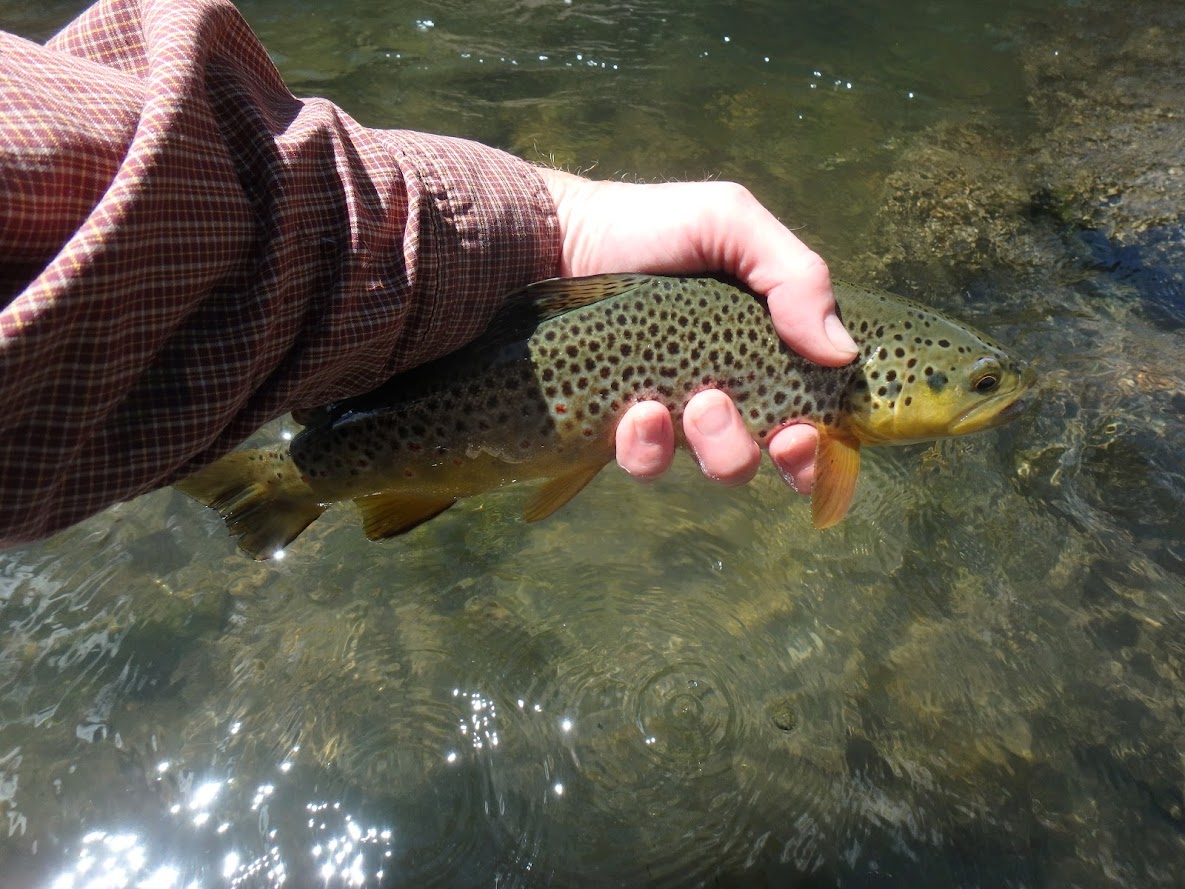 I continued fishing the dry/dropper rig for another fifteen minutes with the naive hope that the rising trout would also snatch subsurface nymphs during their feeding binge. This idea was misdirected, and I wasted valuable hatch time, while fish continued to feed on the surface albeit at a fairly leisurely pace. When I observed two nice fish hovering a foot below the surface downstream and across from my position, I could no longer resist the urge to convert to a dry fly. I clipped off the three dry/dropper imitations and tied a size 18 cinnamon comparadun to my 5X tippet. I spotted a decent fish eight feet above me and lobbed an exploratory cast to a spot above the sighted trout.

Imagine my surprise when the visible fish darted upward and snatched my cinnamon comparadun. I played the thirteen inch prize to my net and quickly dried the cinnamon dun imitation. I was now confident that I could dupe the two down and across feeders to my recently anointed hot fly. I made some excellent casts with slack that allowed the dry fly to drift over the position of the downstream feeders without drag. I managed to prick two fish during this pre-lunch time frame, but the more prevalent condition was total avoidance of my pale morning dun imitation. I switched to a light gray size 16 comparadun, but it was treated with similar disdain, so I sat down on a large flat rock and devoured my ham sandwich, carrots and yogurt.

The pale morning dun hatch lingered for an hour, and before I finished lunch it consisted of only a few lonely stragglers, and the fish returned to their normal safe holding positions. I moved upstream and searched for random rises, but the South Platte River trout were not revealing their positions, and continuing to cast the tiny size 18 seemed like a futile undertaking. I reverted to the dry/dropper rig that decorated my line in the morning; however, I replaced the iron sally with a beadhead hares ear nymph. 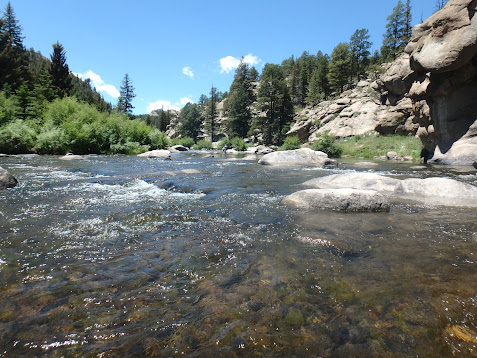 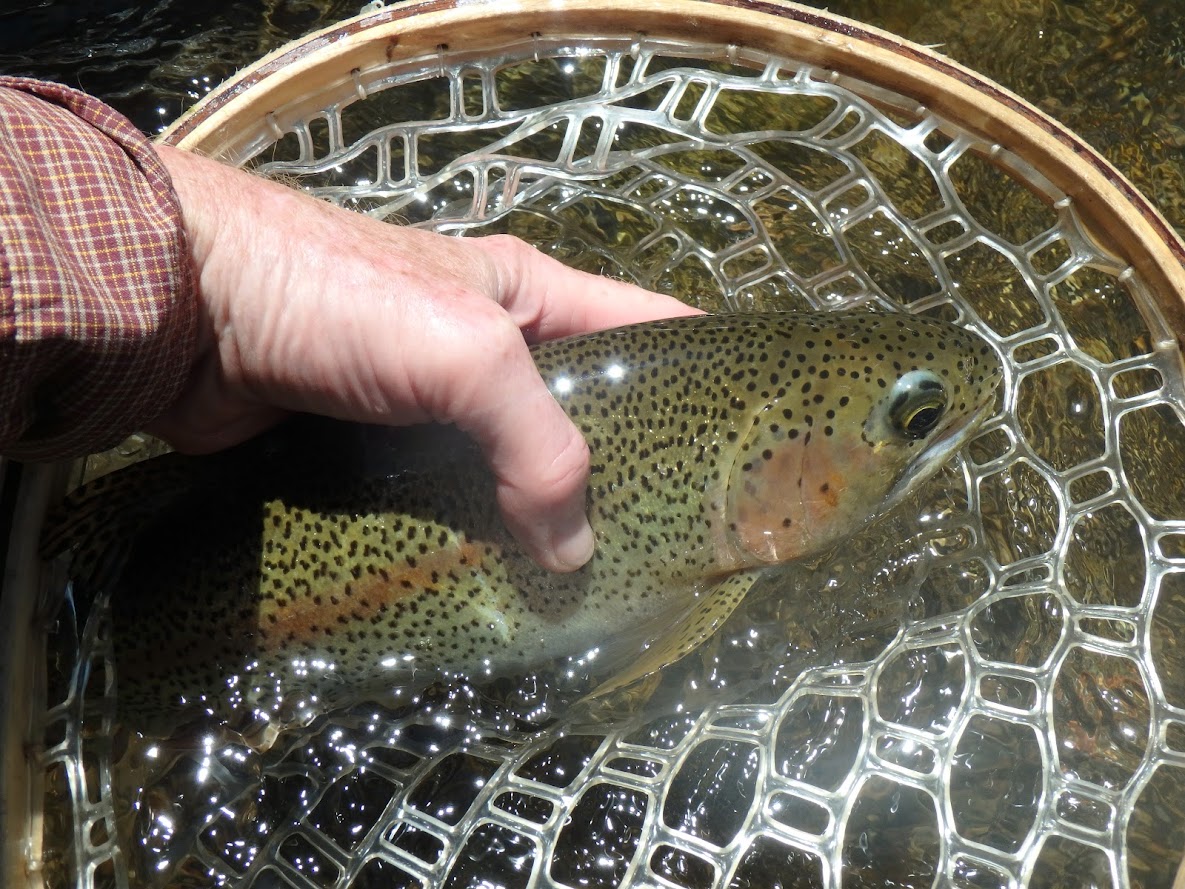 I covered some nice water at the upper end of the vertical rock wall section and moved through a faster stretch with numerous pockets and runs of moderate depth. I carefully searched these areas and added two fine brown trout to my count, and then I encountered a group of three fishermen. I suspected it was a guide with two clients, as the one gentleman did not carry a fly rod. The assumed guide noticed my success and flashed me a double thumbs up each time he observed a bend in my rod. Both of the brown trout favored the hares ear nymph over the salvation. 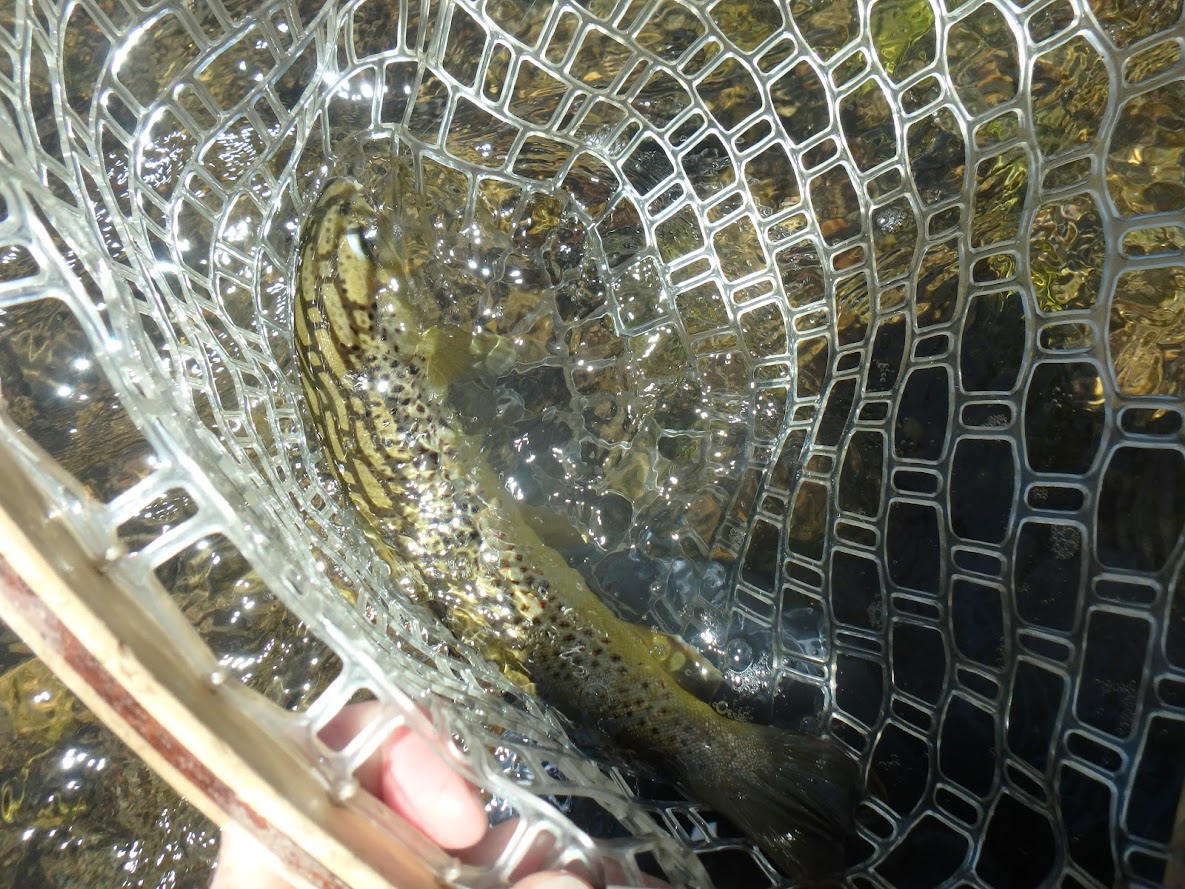 I exited the river and reentered thirty yards above the upper angler, and I found myself in a fifty yard section below another group of fishermen. The river in this area widened a bit, and the runs and pockets were shallower than I desired, but I decided to execute some searching casts. At some point during this phase of my day the salvation nymph broke off, as I battled a fish that attacked the upper hares ear, and I decided to replace it with a size 18 beadhead pheasant tail nymph. The pale morning duns that I observed earlier were on the small side and most likely emerged from a smaller nymph than the salvation, that previously occupied the point position on my line. 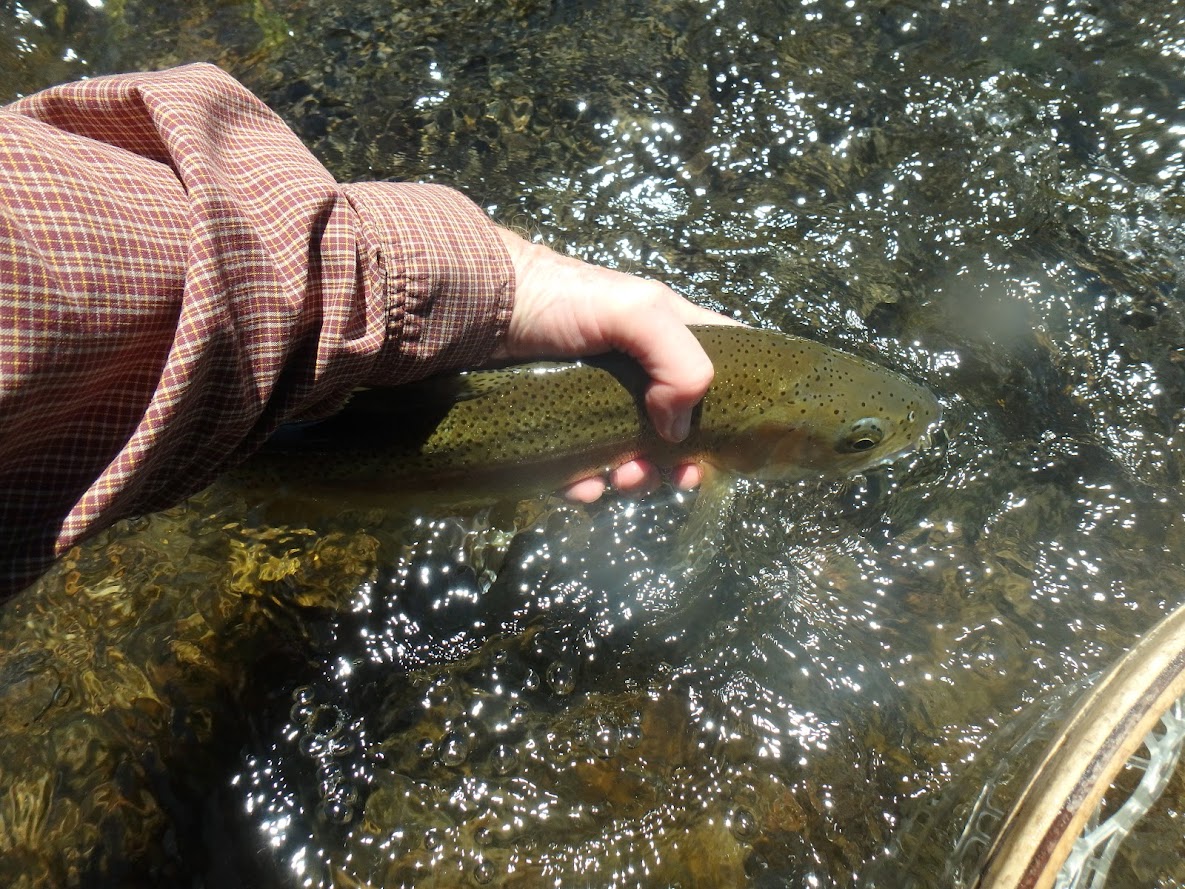 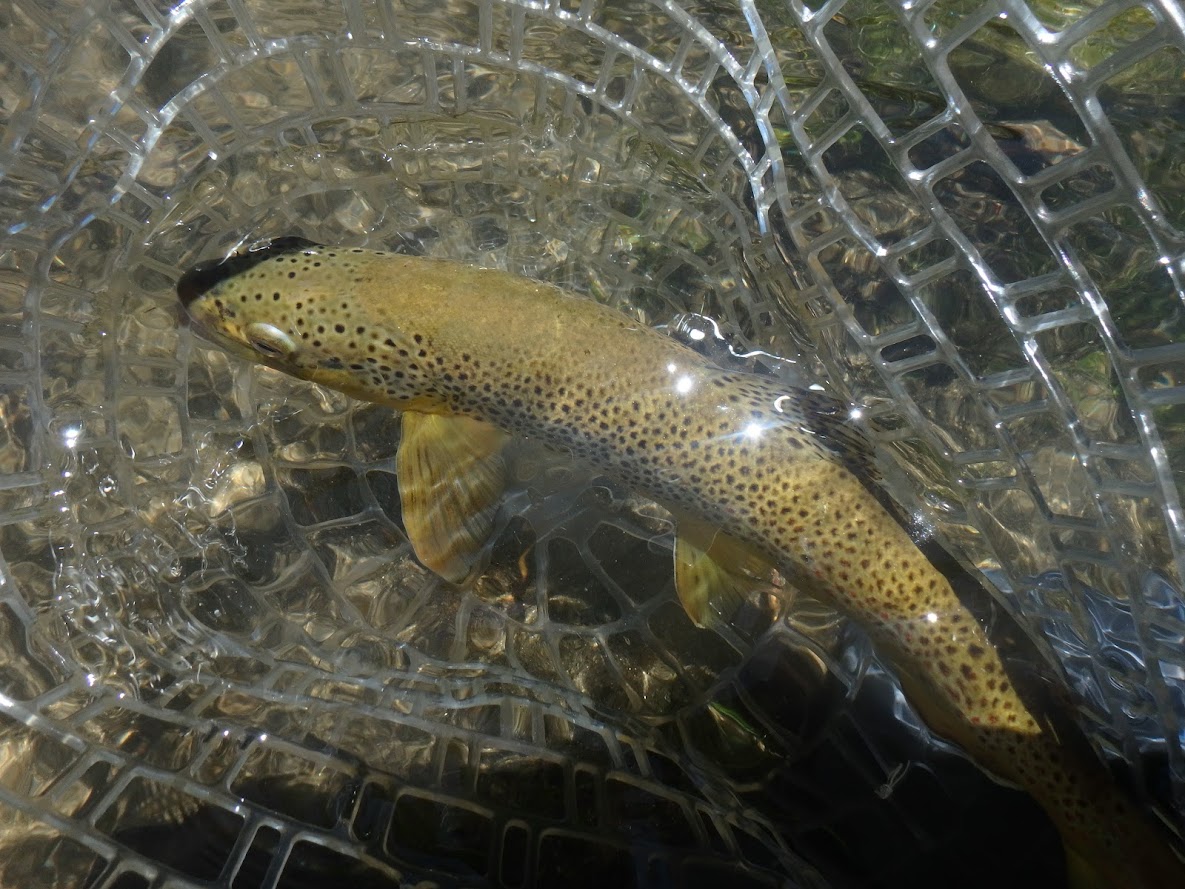 The scene that evolved over the next hour was remarkable. I cast the three flies to relatively shallow riffles and runs, and more often than expected the fat Albert stopped dead in its tracks. When this occurred I raised the rod and felt the pulsing throb of an irritated fish. I hooked and landed a fourteen inch rainbow and a fifteen inch brown trout, and these successes were accompanied by three or four temporary connections. One of the landed fish favored the hares ear nymph, and the other pounced on the pheasant tail. Had it not been for the group of fishermen above me, I would have skipped this section in favor of the more obvious deeper and faster runs above. I can only assume that other fishermen skipped the area as well, and thus the fish were less pressured which translated to more aggressive. 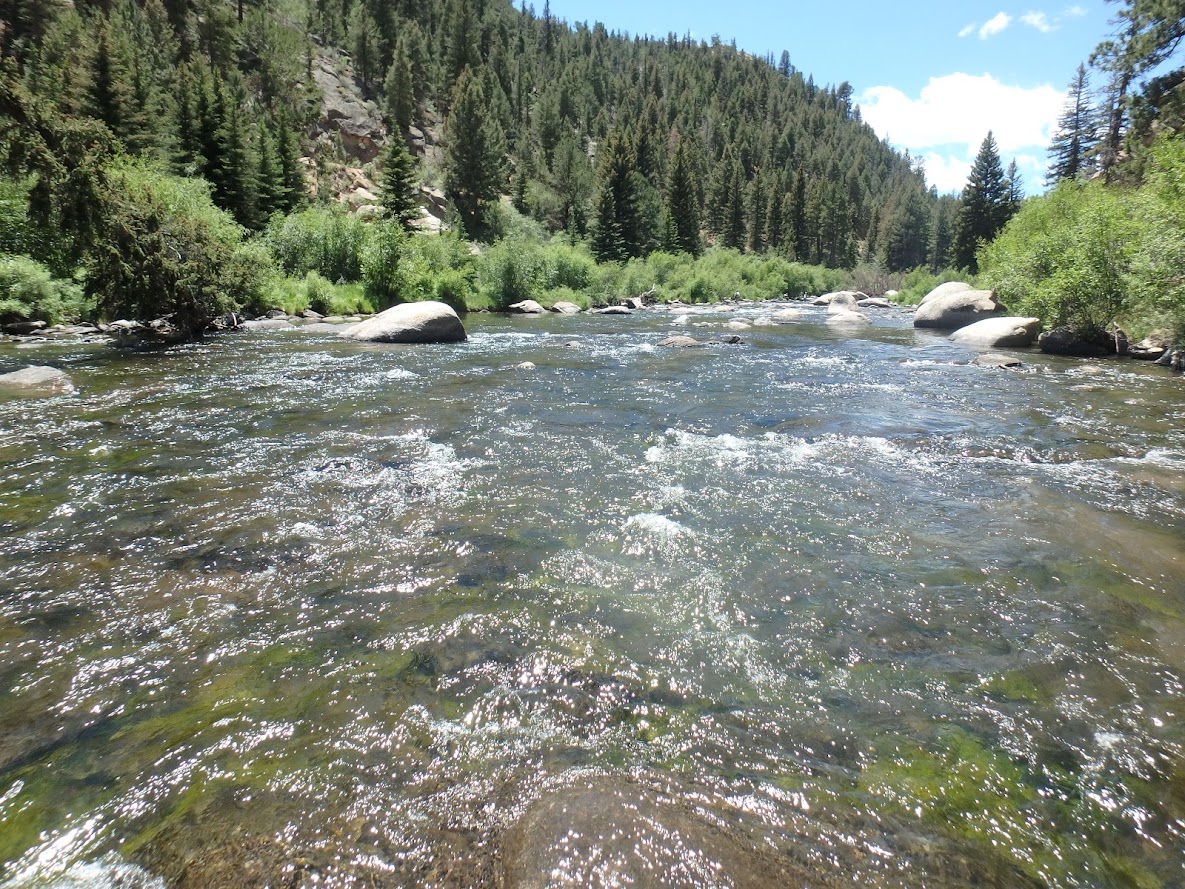 Fly fishing etiquette dictated that I remain a decent distance below the next group of anglers, so I climbed to the north bank and followed a path back downstream to the large pool that was occupied, when I first began. Here I searched the very attractive runs and riffles at the head of the gorgeous pool, and I was rewarded with another fourteen inch rainbow. In addition I foul hooked two crimson beauties and fought a very respectable brown trout for forty-five seconds, before it engineered an escape. I was disappointed with the foul hooked trout, but I was encouraged that nice fish were attracted to my flies. 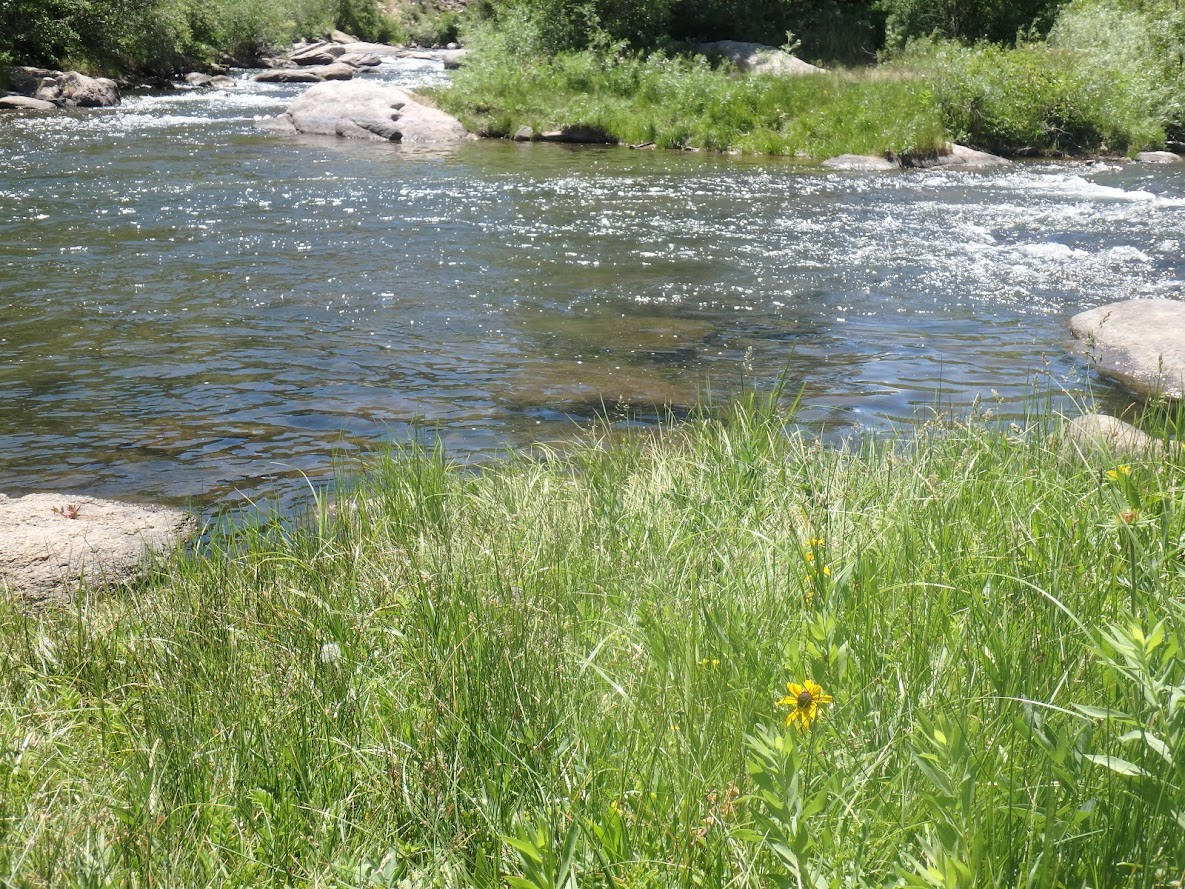 I crossed to the road side of the river and followed a worn path downstream for seventy-five yards, until I was once again a safe distance above another South Platte angler. For the remainder of my day I prospected the three fly dry/dropper rig, until I was back to a point just below the Santa Fe. I am pleased to report, that I landed another fourteen inch rainbow from a nice deep run, and the pink striped missile favored the pheasant tail. A ten inch brown trout successfully snapped up the pheasant tail in a slot between the bank and faster water to account for my tenth fish on the day. 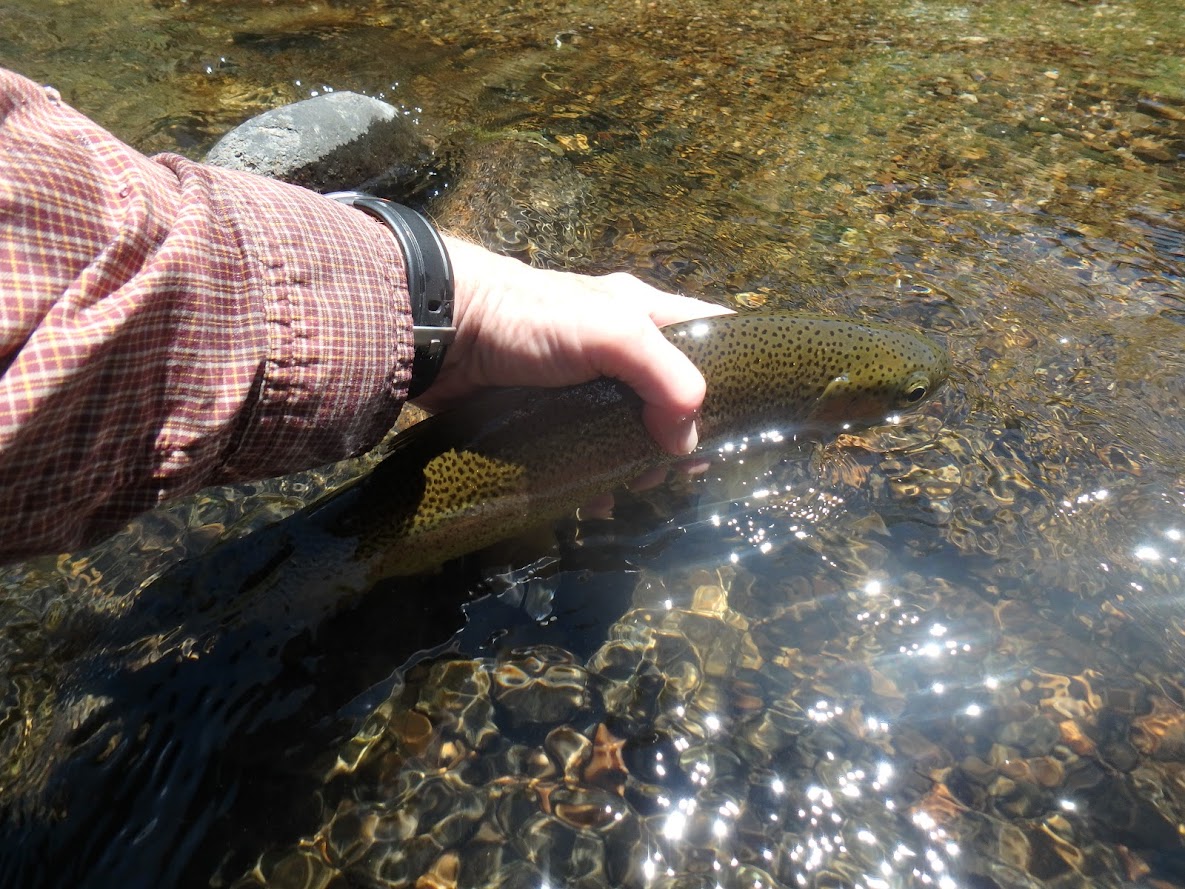 Poised to Swim Away

Ten fish in four hours of fishing is not outstanding, but I was nevertheless pleased with my choice of the South Platte River in Eleven Mile Canyon. The weather and flows were nearly perfect, and sight fishing and comfortable wading were a nice change of pace after four days of fighting swift currents. I learned that a pale morning dun hatch is in progress in Eleven Mile Canyon, and I suspect it will intensify in the coming weeks. Seven of the ten landed fish were in the thirteen to fifteen inch range, and these were strong muscular fighters. A pleasant day such as Wednesday is always a welcome occasion in my summer itinerary.