An angler that I follow on Instagram posted some photos and videos from his day on the South Platte River in Waterton Canyon on Sunday. I had been contemplating a trip to the nearby stretch of the South Platte, and his evidence of a successful day spurred me to make the trip. I checked the flows and noted 180 CFS below Strontia Springs dam and 121 CFS at Waterton. The Waterton graph displayed an increase from 81 CFS to 121 CFS within the last 38 hours, and that represented a nearly 50% increase. Large percentage increases usually cause me some concern, but even the high flows of 180 CFS in the upper three miles were encouraging compared to the blown out conditions on Colorado freestones. 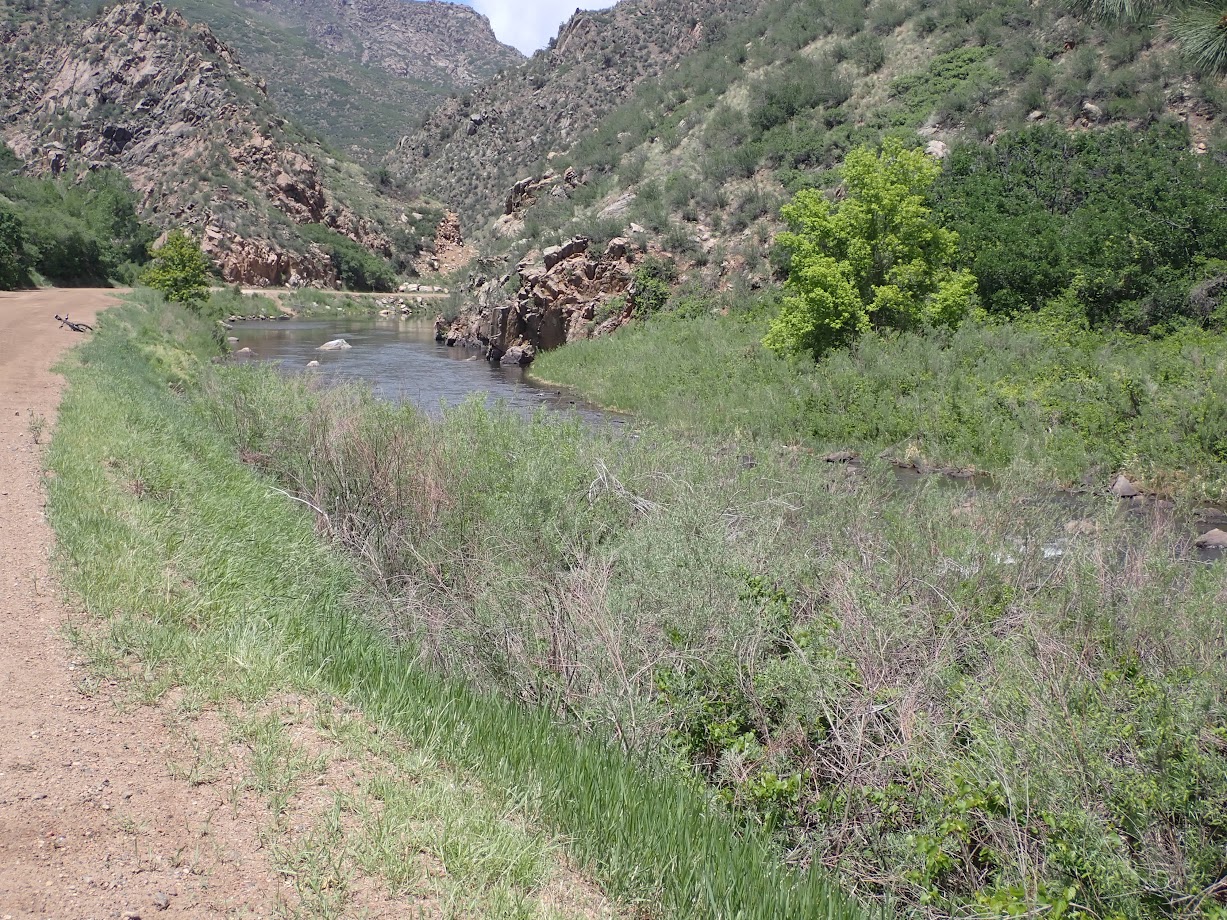 After a couple side issues I was able to depart Denver by 10:30, and this enabled me to arrive at the always busy Waterton parking lot by 11:15. I spent a more than normal amount of time preparing to fish, as I packed all the essentials in a backpack and unloaded my mountain bike from the car. I chose my Sage four weight as my fly rod for my day on the South Platte River in southwest Denver. I cycled from the Waterton parking lot to the Rattlesnake picnic pavilion, and arrived there around noon, so I immediately downed my lunch. I pulled on my waders and assembled my gear and stashed my bike and backpack out of sight behind a clump of vegetation. Once I was fully geared up, I hiked down the road for . 3 mile and then angled down a steep bank to the river. The South Platte carried a tinge of color, and it was indeed rushing along at 179 CFS. The sun was out with the occasional large cloud, and the temperature was in the upper seventies. 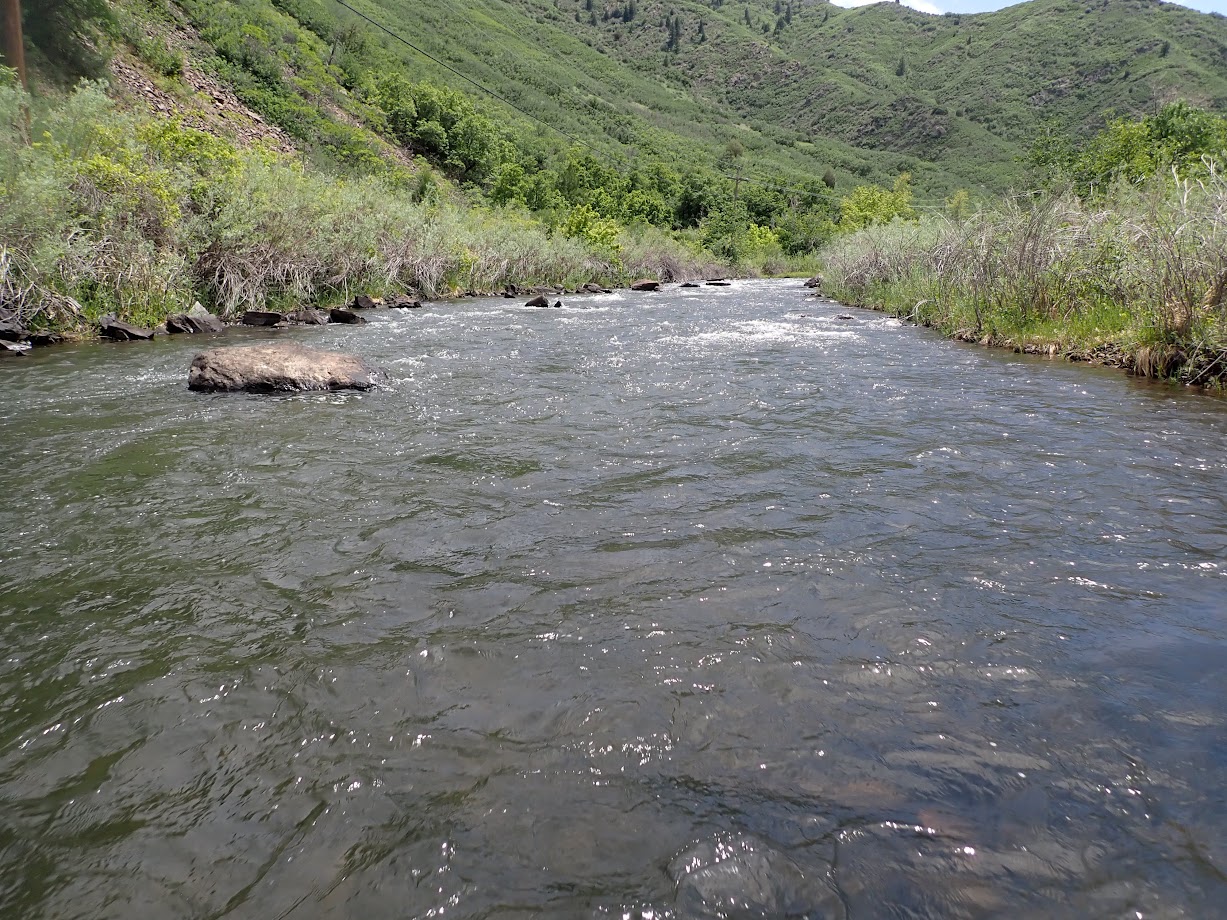 I knotted a yellow fat Albert to my line and then added a beadhead hares ear nymph and salvation nymph, and I began prospecting all the attractive deep runs and riffles. Alas, my enthusiasm quickly waned, as no sign of fish rewarded my diligent casting efforts. I reeled up my flies after twenty minutes and climbed a steep bank and crossed the bridge. I intended to explore the gorgeous pool on the upside of the bridge, but two fishermen bearing a fly rod and spinning rod each claimed the popular pool, so I continued on the road, until I was upstream of the pair. In order to attain access to the river forty yards above them, I was forced to bash through some tight bushes, but eventually I was perched next to some very inviting pockets and runs of moderate depth. Surely this section would yield my first fish of the day.

Unfortunately my optimism was ill founded, and after another twenty minutes of intense fly fishing, my fish counter remained at zero. My mind began working overtime to solve the riddle, and I concluded that I needed to get my flies deeper in the cold and elevated flows. I removed the dry/dropper paraphernalia and replaced it with a New Zealand strike indicator, split shot and the hares ear nymph and salvation nymph. On the second cast with this configuration, the split shot wedged on some rocks, and when I waded closer to inspect, I concluded that  the area was too swift and deep to attempt a close rescue. I applied direct pressure, and the line snapped. Imagine my utter disgust, when I discovered that the line broke off at the tapered leader, and I realized that I lost the strike indicator, split shot, two flies and a significant portion of my leader.

This convinced me that I should retreat to the river below the diversion, where the flows were a more manageable 121 CFS and more conducive to the dry/dropper approach. I sat down at the picnic table at the Rattlesnake Pavilion and removed my stunted leader and replaced it with a brand new nine foot version tapered to 5X. I coiled the old leader and tossed it in the bear-proof trash can next to the pavilion. Next I tied the fat Albert on my leader, so I had something to hook in the rod guide for my bicycle ride to a new location. When I retrieved my mountain bike and backpack from their hiding place, I was unable to secure the backpack on top of the Fishpond fishing backpack, so I removed the Fishpond frontpack and backpack and stuffed them in the camping backpack. My wading staff went in the side compartment, and I held my fly rod on the handlebars for the two mile downhill ride to my next chosen fishing spot. 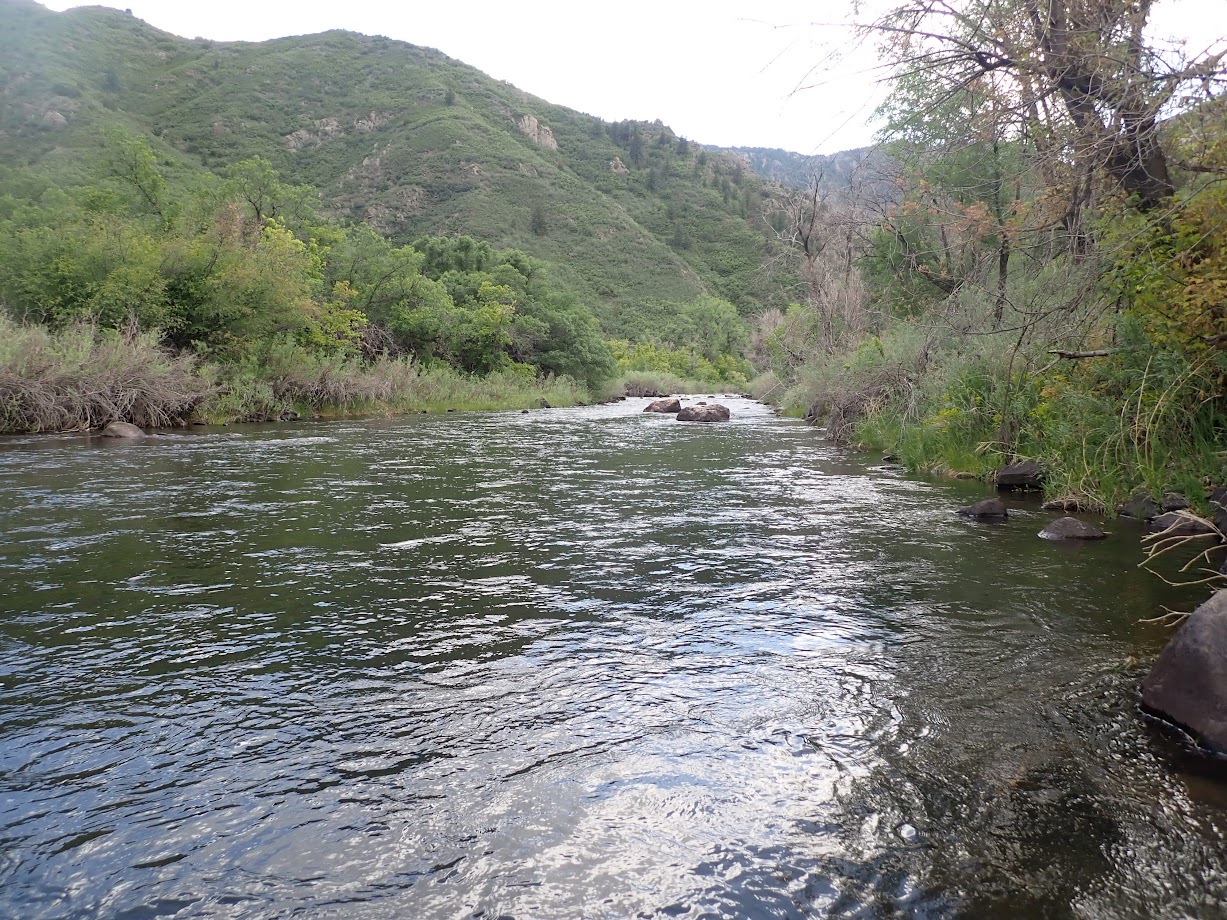 Upon my arrival at an area approximately .5 mile below the diversion I positioned the bike and backpack near the top of the bank along the road, and then I found a safe spot to angle to the water. For this session I added a go2 sparkle pupa below the fat Albert and then supplemented it with a salvation nymph. Once again I began probing the likely holding spots, and finally at the tail of a narrow deep slot behind an exposed boulder, I nabbed a brown trout that barely exceeded the six inch minimum required for counting. I was on the verge of a skunking, so I shamelessly counted it.

I moved a bit upstream and tossed the dry/dropper to a fairly nondescript riffle next to the bank, and a mouth appeared, as it chomped down on the fat Albert. What a shock! I lifted my rod tip and felt myself attached to a rambunctious trout that eventually nestled in my net. It was a twelve to thirteen inch brown trout and easily the best fish of the day. Within the next fifteen minutes the fat Albert dove, and I set the hook into a ten inch brown trout. Was I poised for an extended period of success in Waterton Canyon? 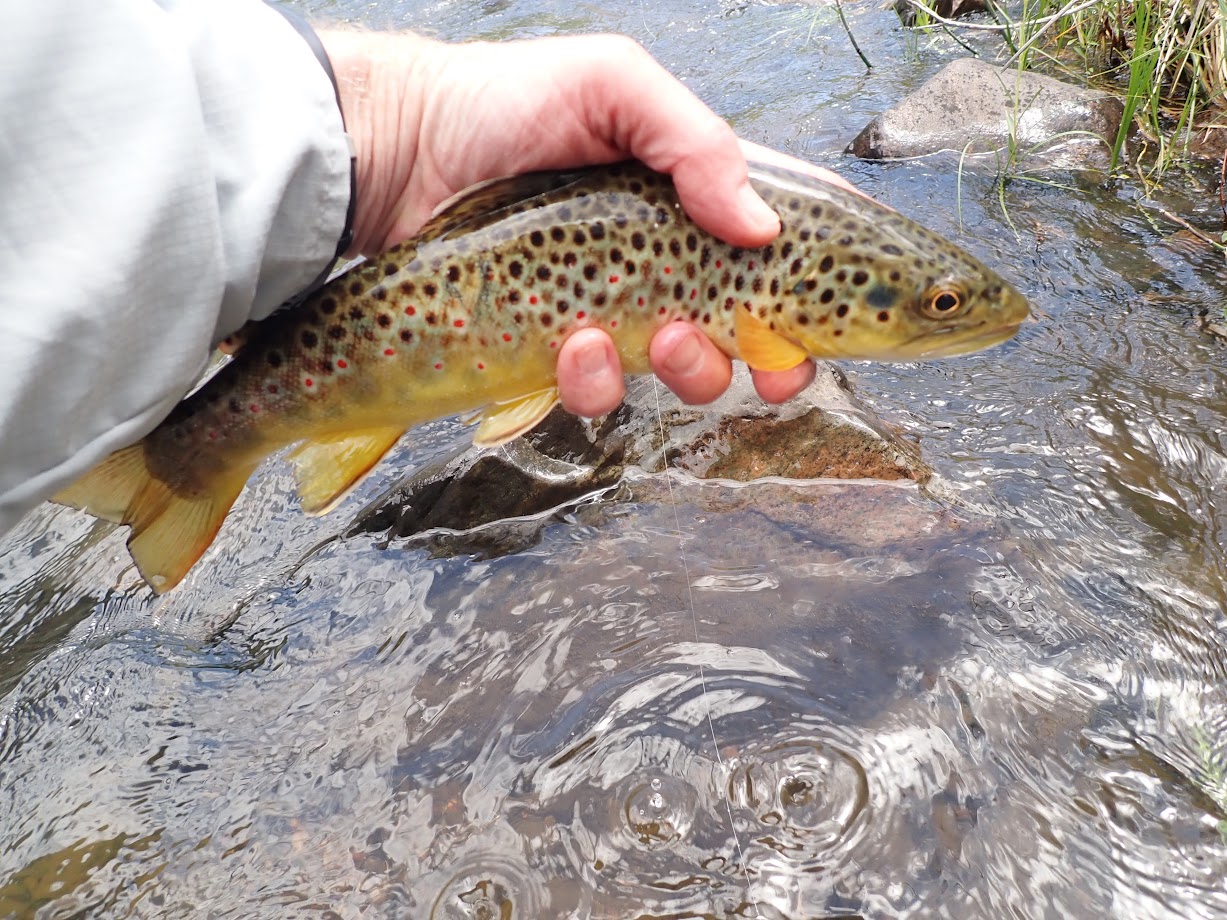 The short answer is no. I continued fishing for another couple hours, and failed to land another fish. By 4:00PM I was bored with my lack of action, so I decided to mix things up and replaced the dry/dropper with a double dry that consisted of a peacock body hippie stomper and a size 14 olive-brown body deer hair caddis. On the very first drift over a moderate riffle, a fish smacked the hippie stomper, and I reacted with a swift rod lift; but, alas the fish streaked downstream on an angle, and the flies popped free. For the next twenty minutes I cast the double dry to some very promising areas, but the long distance release was my last connection with a trout on Tuesday, June 7.

My luck in Waterton Canyon has been lackluster during my last couple visits, and Tuesday was no different. I suspect the higher flows in the upper water had the fish hugging bottom, and I probably should have persisted with the deep nymphing approach, but the quick break off and total leader reconfiguration caused me to overreact and move. I managed a small amount of success in the area below the diversion, but I suspect the significant increase in flows caused the trout to adjust, and eating was not their primary focus. Other than a few tiny caddis, I observed no significant food source for the Waterton Canyon trout. I suspect it will be awhile, before I visit the canyon again. Cycling and carrying a backpack represent a significant amount of effort for meager results.