Three unproductive trips to lakes reinforced my desire to visit some flowing water, but the nagging question was where? Based on my review of the stream flow data on the DWR web site, it was clear that tailwaters offered the only viable option, as the Colorado freestones climbed toward their peaks. I contemplated the South Platte River for my trip on May 29, but the idea of a solo excursion of that length within eight weeks of heart surgery discouraged me, and I opted for nearby Bear Creek. Friday was a fun comeback outing, but I yearned for the possibility of tangling with trout of greater size.

The weather forecast for the week of June 3 projected highs in the upper 80’s and low 90’s. At the start of the week I suggested to Jane a trip to the South Platte River in Eleven Mile Canyon, and she agreed. Jane could share the driving and track my well being, as I logged some sorely needed stream time. I checked the flows on Thursday morning, and 83 CFS was the current reading, and I knew from history that this level was nearly ideal. I was, however, bothered by the slope of the line, as it rose from 60 to 83 over the last few days.

I packed most of my gear on Wednesday night, and on Thursday morning we threw Jane’s bicycle and folding chair in the Santa Fe, and we hit the road by 8AM. This departure time enabled us to pull into a wide parking space by 10:00AM, and my wading boots were wet by 10:30AM. I elected to utilize my Sage four weight in case of wind, and after contemplating wet wading I opted to wear my waders. Ironically I am a fisherman, who does not particularly like to get wet. 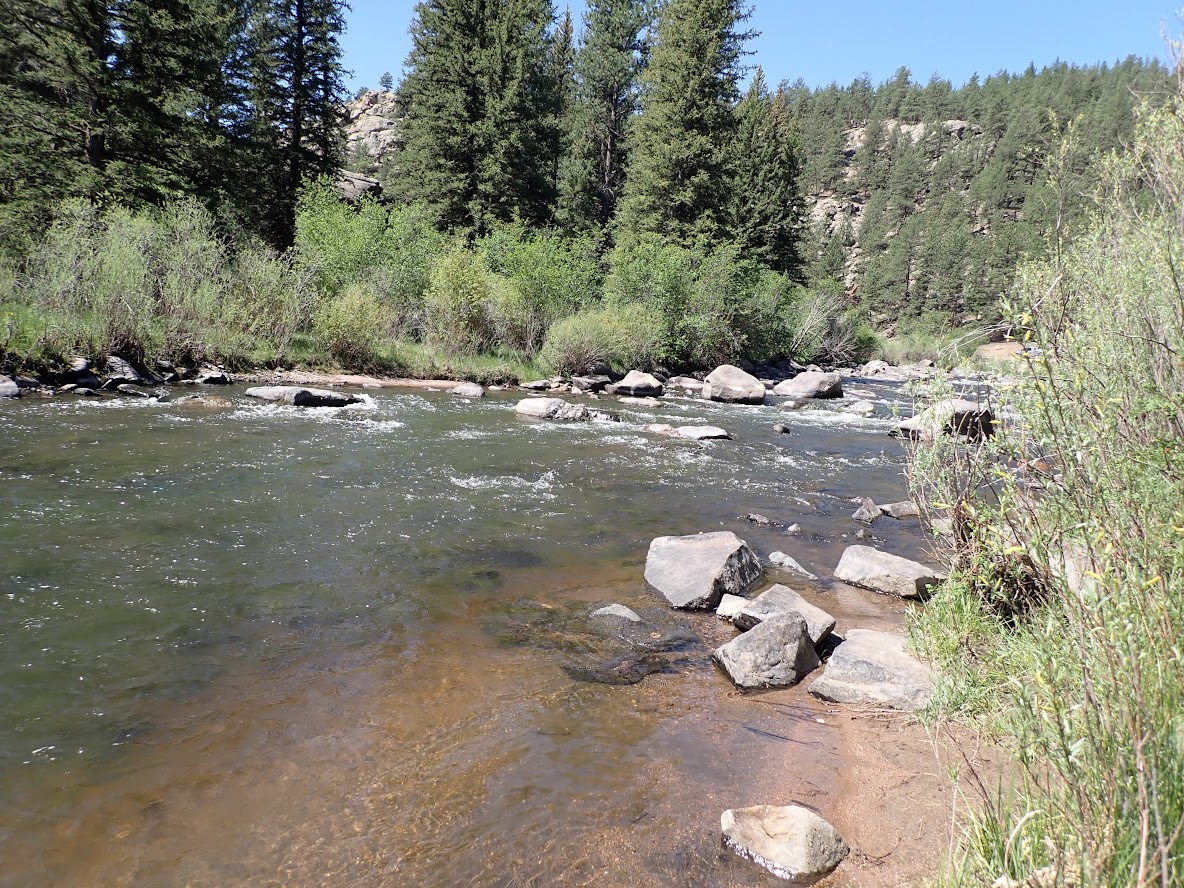 As Good a Place as Any to Start

Quite a few competing fishermen were in the canyon, as the South Platte River represents one of a limited number of tailwaters that provide manageable flows during the run off time period. In spite of the greater than normal population of anglers, I found a nice starting spot at the bottom of a lengthy section of pocket water. Jane departed on a two hour hike, while I extended my leader and tied on a size 6 yellow fat Albert, a beadhead hares ear, and a salvation nymph. I decided to rely on the historically top producing flies from my fly box. I began lobbing casts upstream, and I allowed the three fly configuration to drift through some very attractive deep riffles and runs. After ten such passes I was surprised with a lack of action, but then just as the fat Albert entered a deep hole in front of a large submerged rock, it dipped, and I set the hook on a nice twelve inch brown. This was my largest post-operative fish, and I enjoyed a brief celebration. The much appreciated brown trout nipped the salvation nymph. 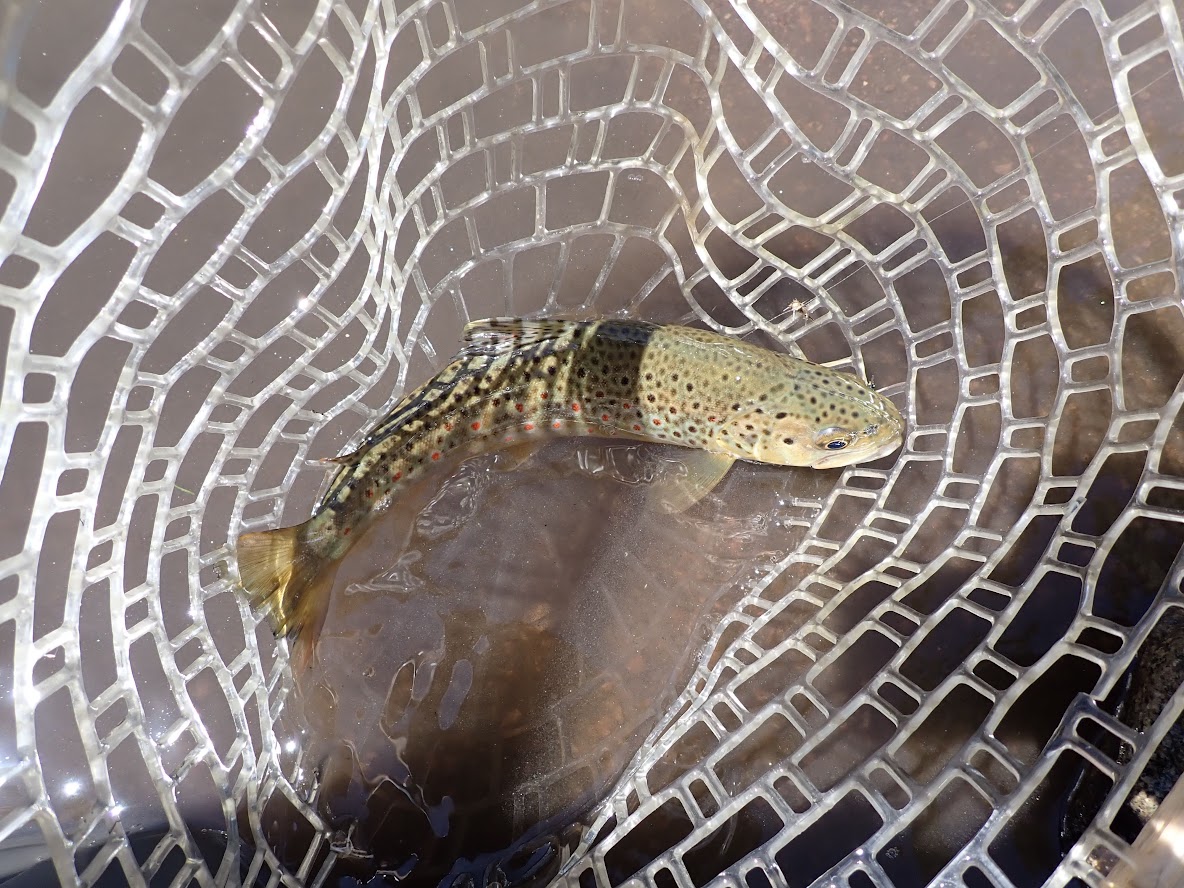 I moved on through some additional juicy pockets, but the local trout were ignoring my three fly offering. A few caddis buzzed about along with a rare size 20 mayfly, but then I spotted a pair of size 12 or 14 golden stoneflies. I reacted to this observation by swapping the salvation nymph for an iron sally. The move paid dividends, when I landed three additional brown trout in the 12 -13 inch range shortly before noon. All three trout came from a narrow but deep ribbon of water that flowed between a large exposed boulder and the fast main current. I probed many more attractive places during the morning with no response, but I was nevertheless pleased by this sudden reversal of fortunes. All three of the hungry brown trout gobbled the tumbling iron sally, and this circumstance vindicated my switch. 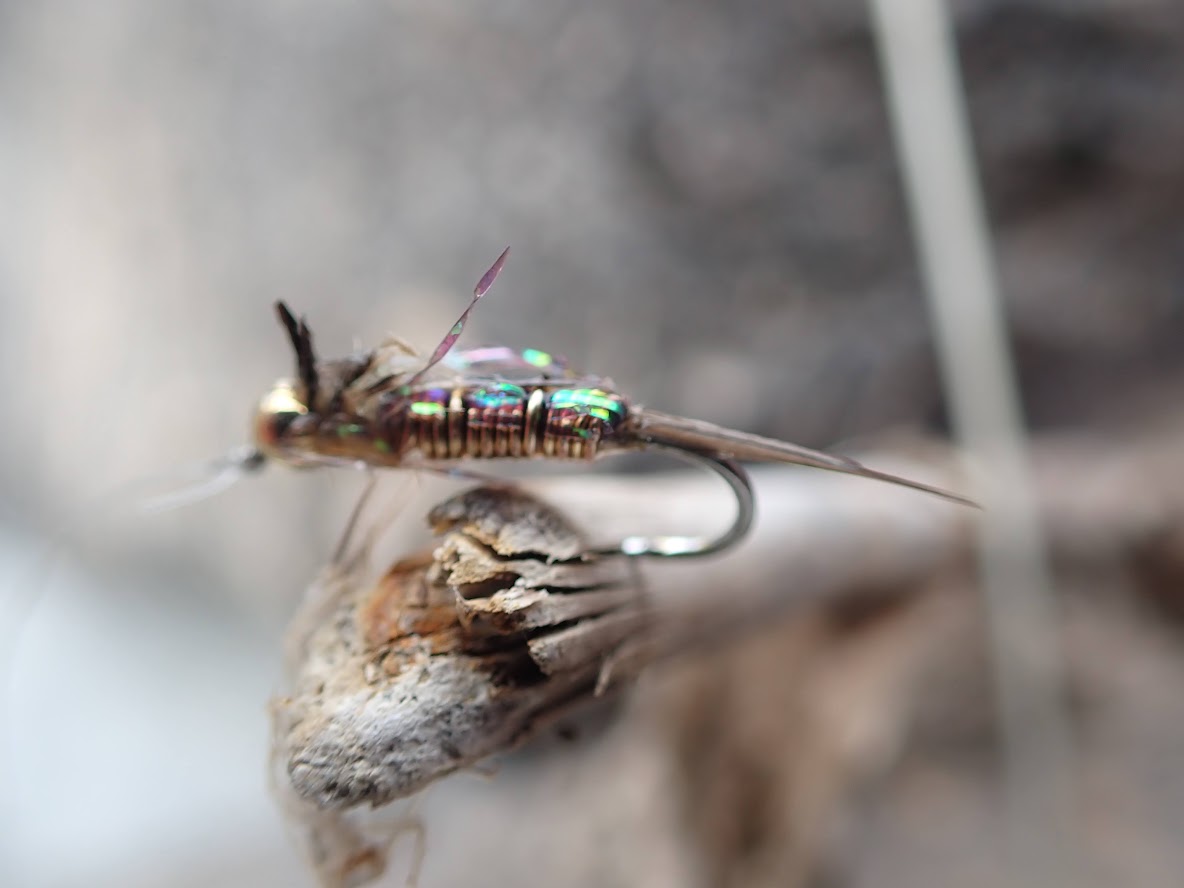 Iron Sally Got It Done 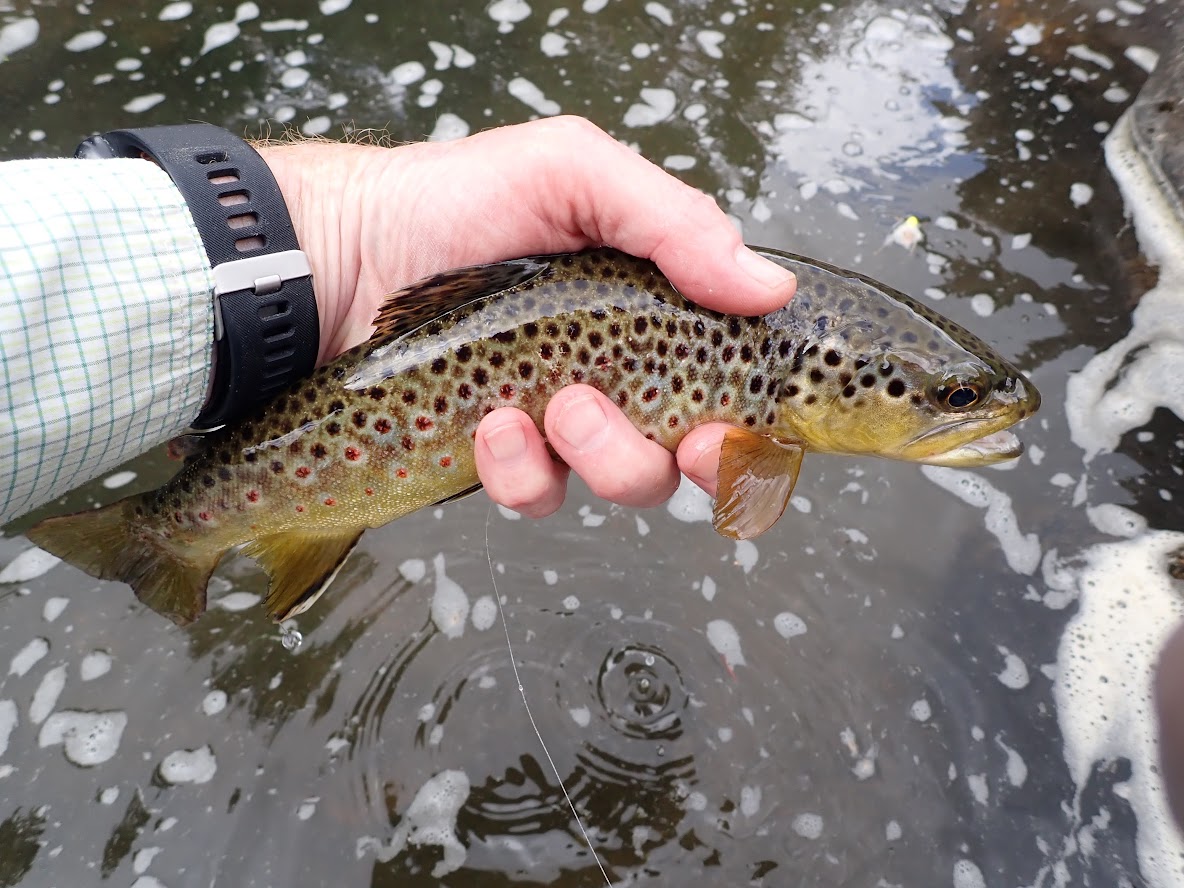 I crossed the river and returned to Jane’s shady retreat along the dirt road, just after she returned from her hike. I grabbed my lunch and stool, and we relaxed and chatted for twenty minutes, before I resumed my quest for trout. I hiked back along the shoulder of the road, and while Jane looked on, I carefully lowered myself down a steep bank and crossed the river, until I was positioned just above my exit point. Between 12:30PM and 2:00 PM I continued my upstream progression at a steady rate, and I prospected all the likely runs and pockets. I was pleased to have the entire river to myself until the last thirty minutes, when a solo angler appeared above and below me. 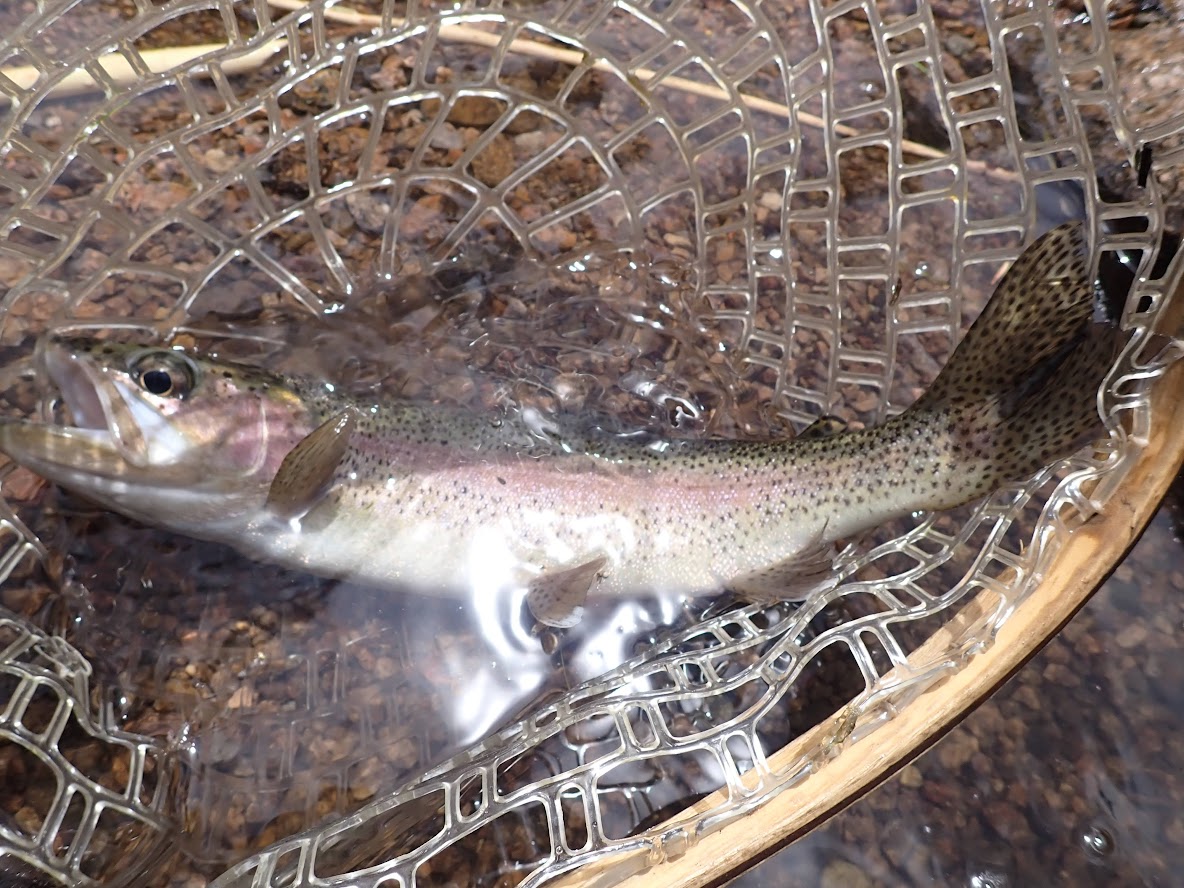 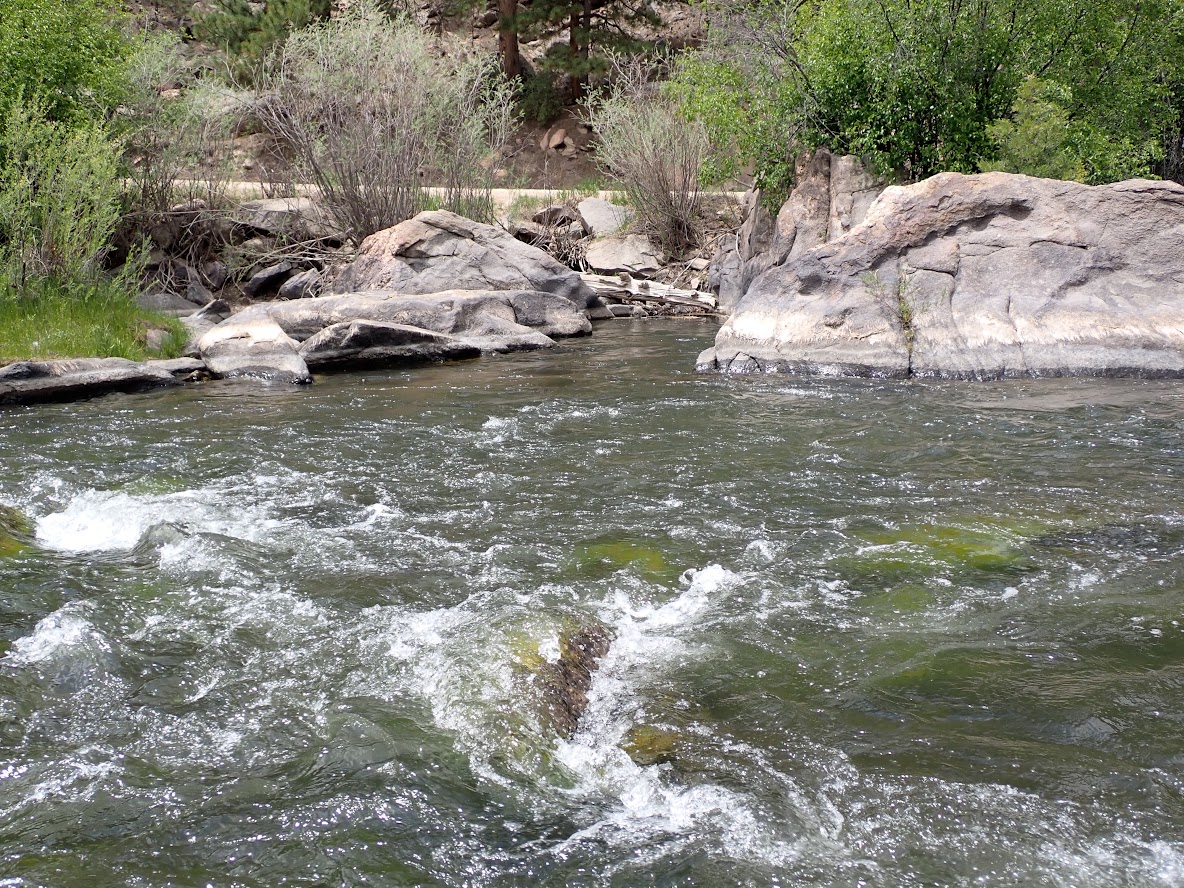 Deep Riffles in Front of Large Boulder Produced the Rainbow

For the first twenty minutes after lunch I failed to discover any signs of trout in spite of passing through quality water, so I made another modification to my lineup. I replaced the unproductive hares ear with an emerald caddis pupa, but maintained the trailing iron sally. Shortly after this adjustment the fat Albert dipped in a deep riffle near the opposite side of the river, and I quickly lifted the rod tip and found myself attached to a rambunctious rainbow trout. The silver bullet streaked up and down the river, until I eventually leveraged it into my net. The pink striped tout displayed an emerald caddis pupa in its mouth, and it extended to fourteen inches; the best fish of the day. 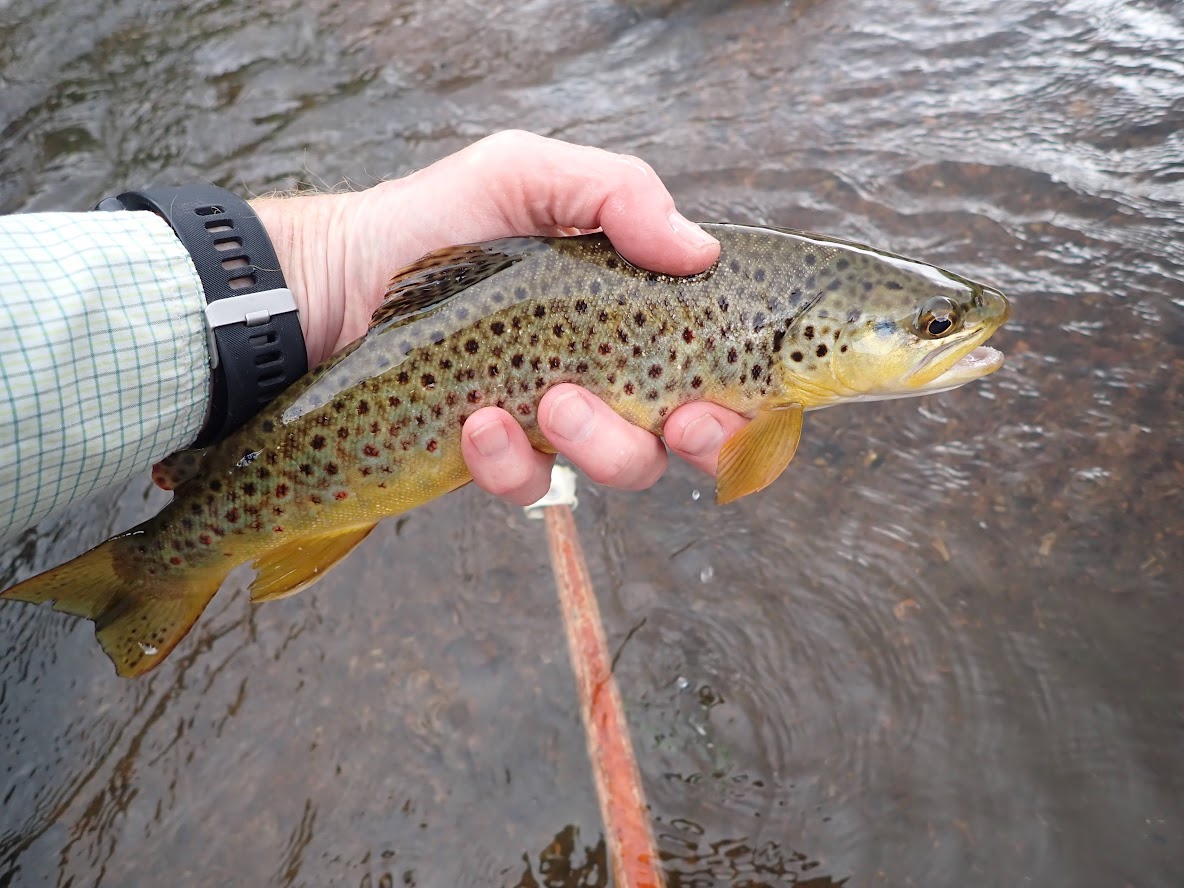 For the remainder of the afternoon I worked my way upstream and methodically cast to all the likely trout lies while adding three more brown trout to the count. All were in the twelve to thirteen inch range, and one feasted on the emerald caddis pupa, one crushed the fat Albert, and the other grabbed the iron sally. Some clouds moved in and blocked the sky for a short while, and a flurry of raindrops descended but not enough to force a retrieval of my raincoat. Between 2:30 and 3:00PM I approached a young angler above me, and I looked back on another single fishermen in the water that I just covered. I gently released my eighth fish and waded across the river and then returned to the car. 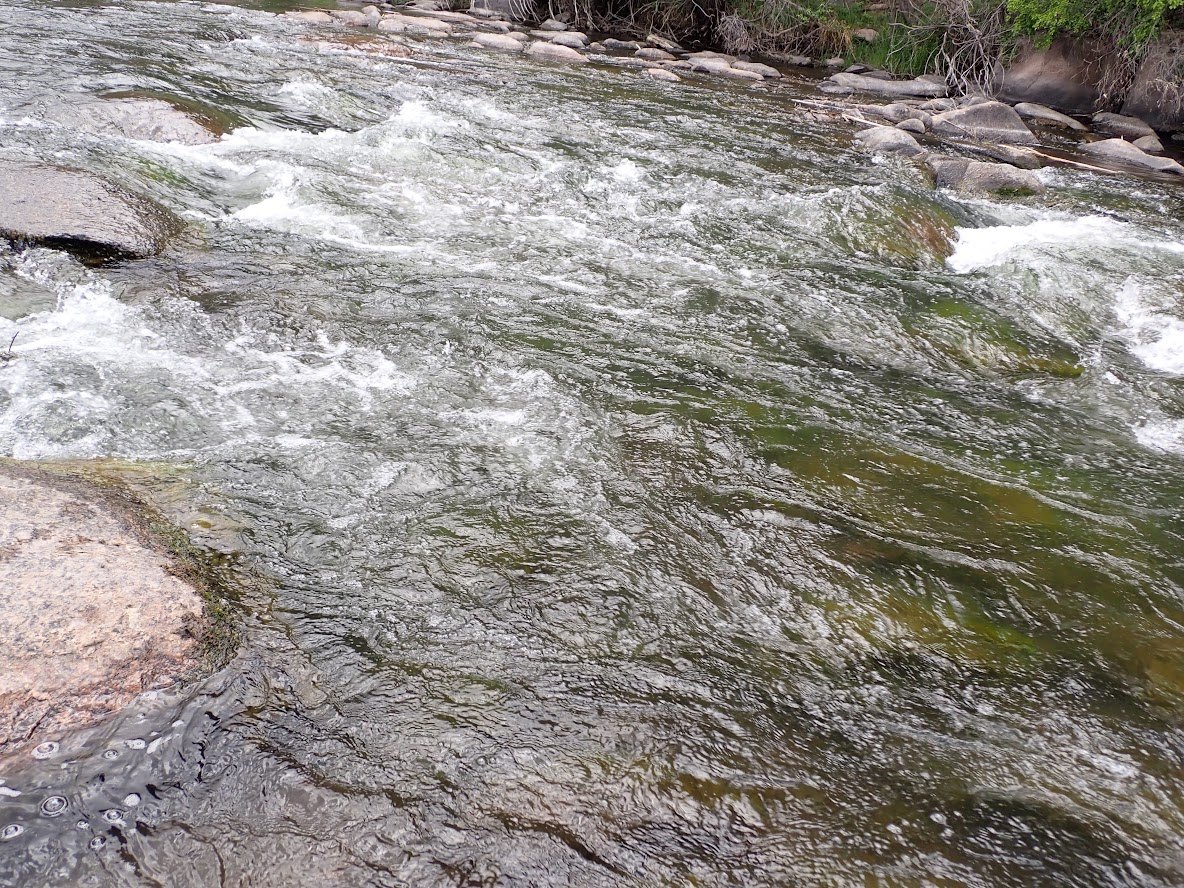 In 3.5 hours of fly fishing I landed eight trout, and all were twelve inches or greater. This was my best outing by far since my surgery, I was was quite pleased with the outcome. Quite a few promising spots failed to deliver, and the larger, slow moving pools were not productive. I focused my efforts in long deep runs next to current seams, and riffles of moderate depth or large deep pockets were also favorite trout lairs. Afternoon cloud cover probably kept the high temperature in the upper seventies, and the scenery was exceedingly spectacular. I love the large boulders and spaced out pines that characterize the South Platte drainage. Jane had a great time as well, so hopefully I can convince her to make another trip in the near future. I noticed that the flows have gradually elevated to 93 as of June 5.