After hosting a Memorial Day party on Sunday, Jane and I decided to take a break and visit one of our favorite places in Colorado, Cheesman Canyon. Cheesman Canyon can only be accessed by hiking on the Gill Trail for two to three miles, and it is a beautiful setting as the clear cold South Platte River cuts through a deep canyon with massive boulders and tall ponderosa pines. We packed our lunches, water and fishing and hiking gear and got off to a late start. As we descended to the South Platte drainage at Nighthawk and began driving along the river it was evident than a lot of folks were taking advantage of the 75 degree sunny day and the Memorial Day holiday.

We couldn’t find a parking space at the Wigwam parking lot so circled back to the dirt road that crosses the Gill Trail and parked along the shoulder. I stashed all my fishing gear in my backpack as it was too warm to hike fully attired in chest waders. After a forty minute hike we found a small shaded spot on a large slanted rock next to the river just above Cows Crossing and munched our lunches. Leftover teriyaki chicken from the Sunday cookout was a tasty highlight. 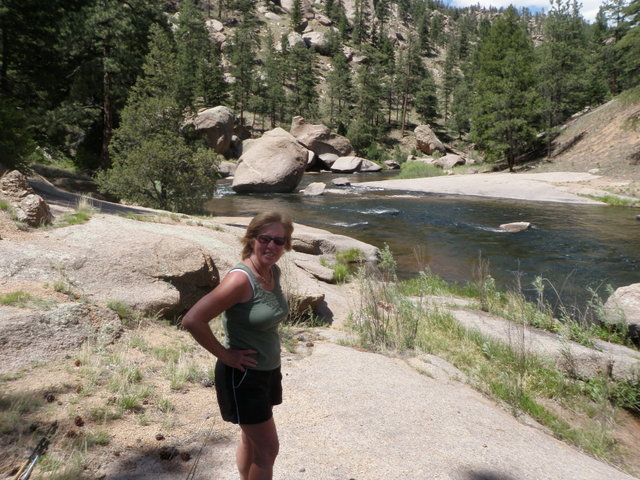 Jane at Our Lunch Spot in Cheesman Canyon

After lunch I rigged my Scott six weight, clipped on a split shot and knotted a green caddis larva and RS2 to my line. Jane found a thingamabobber in a small eddy next to our lunch rock, so I attached that as my strike indicator. I walked up the right bank twenty yards and began working the deep runs. Having failed to receive any response to my offerings I skipped around a huge boulder and found a nice deep spot where the current funneled around another large boulder and fanned against the boulder I circled. Here on the tenth drift along the edge of the faster current a nice fourteen inch rainbow grabbed the RS2 and I battled it to the gravel beach where I snapped a quick photo. 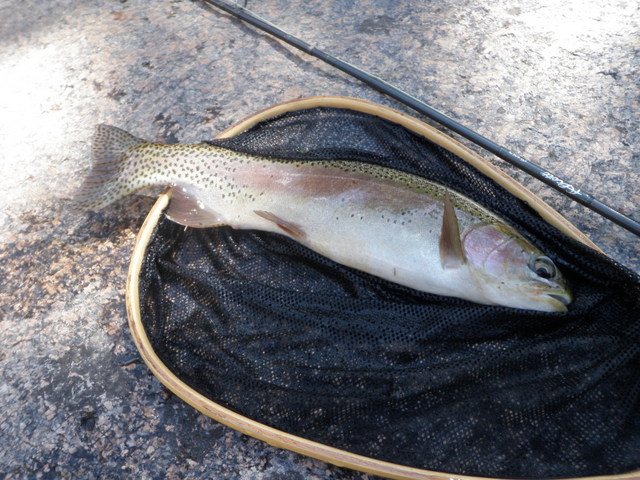 I continued upstream to a very nice spot where the river widened and tumbled over some rocks creating a nice wide fan shaped riffle. On an early upstream cast something caused the strike indicator to dart and I set the hook and momentarily felt the weight of a fish. But just as quickly the fish was off, so I continued casting and after quite a few drifts fanned out over the top of the riffles I managed to hook and land a 12 inch rainbow that was also deceived by the small beadhead RS2.

The next stretch featured some fisherman gymnastics as the steep canyon wall met the river and left only a single way to progress which involved contorting my body to squeeze through some small openings between the rocks. The area actually felt like a grotto with the large rocks and small openings and water running beneath me. On the other side of the boulder garden the river wasn’t as attractive and as I fished fairly quickly Jane appeared high on the trail above. She negotiated her way down the steep trail and met me at Rainbow Bend where we took some photos. 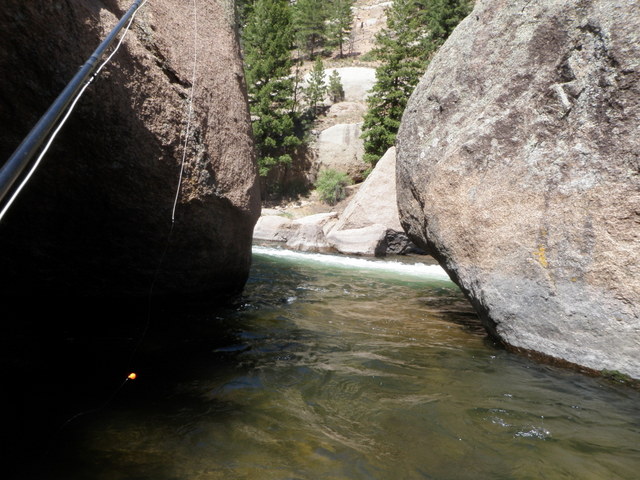 The other side of rainbow bend featured a long pool and I covered this water with my nymph combo to no avail. I could see quite a few fish, but I suspect the splash of my indicator, line and split shot in the slower moving water was spooking them or at least alerting them to my presence. The green caddis larva had yet to produce any fish, so I decided to exchange it for an orange scud. Orange scuds had been very effective on the South Platte in May when I used to fish it prior to the Heyman fire.

At the top of the long pool there was a nice deep area where the riffles consolidated into a long deep run with deep water on both sides of the run. I fished this area thoroughly and as I was about to continue, I slung a long cast to the very top of the riffle where it dropped off into the deeper water along the main current. Wham! The indicator darted and I set the hook and I was attached to a large torpedo. Fairly quickly I received a glimpse of the large rainbow as it turned broadside in the current and shot downstream beyond my position a bit. I held tight and let it run, but when it paused I used the power of the six weight rod to turn it and maneuver it to the side. The rainbow then began a tactic of rolling on the line, but the orange scud held and I was able to scoop the big guy into my net. I let out a couple whoops of glee and as I carried my net to the gravel beach for a photo, Jane reappeared high on the trail above. She was amazed at the size of the fish as I held it with two hands for her to see. The fish extended beyond the opening of the net by two inches and carried impressive girth. 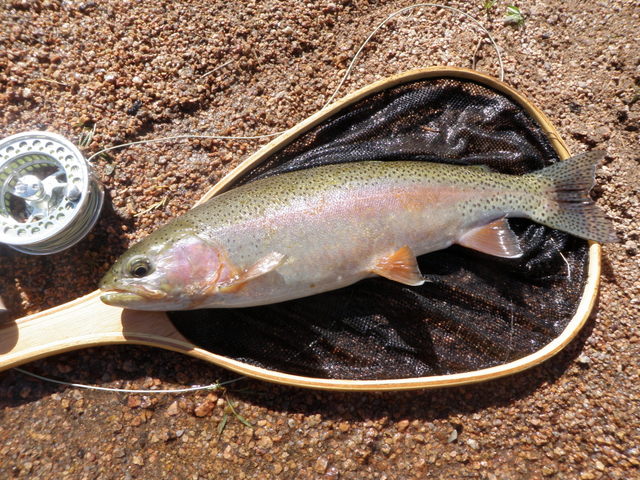 I fished a bit longer but couldn’t create any success, so as the shadows began to extend I climbed up to the path and hiked back to meet Jane at our lunch base camp. We packed up all our belongings and made the long hike back out of the canyon to the car and returned to Denver. 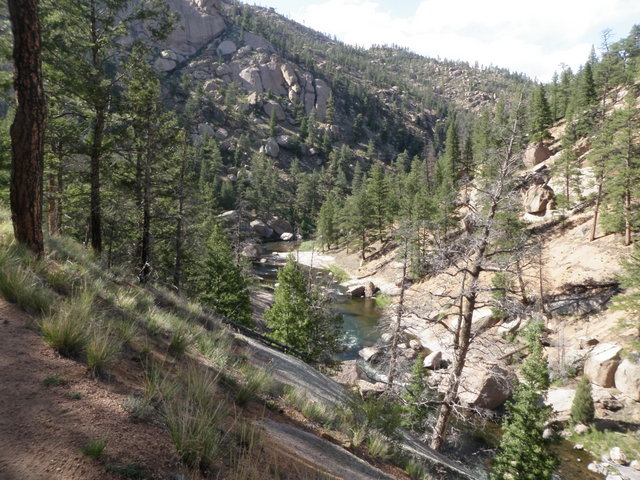