My options for fishing in Colorado rivers and streams dwindled, as I reviewed the flows upon my return from a week in Kauai. Bear Creek, Boulder Creek, the North Fork of St. Vrain Creek, and the Big Thompson remained viable, even though they were on the upper border of disappearing from my possible list. The South Platte River at Lake George was trending upward at 170 CFS, when I checked the DWR graphs on Monday evening, so I decided to give it a go on Tuesday. 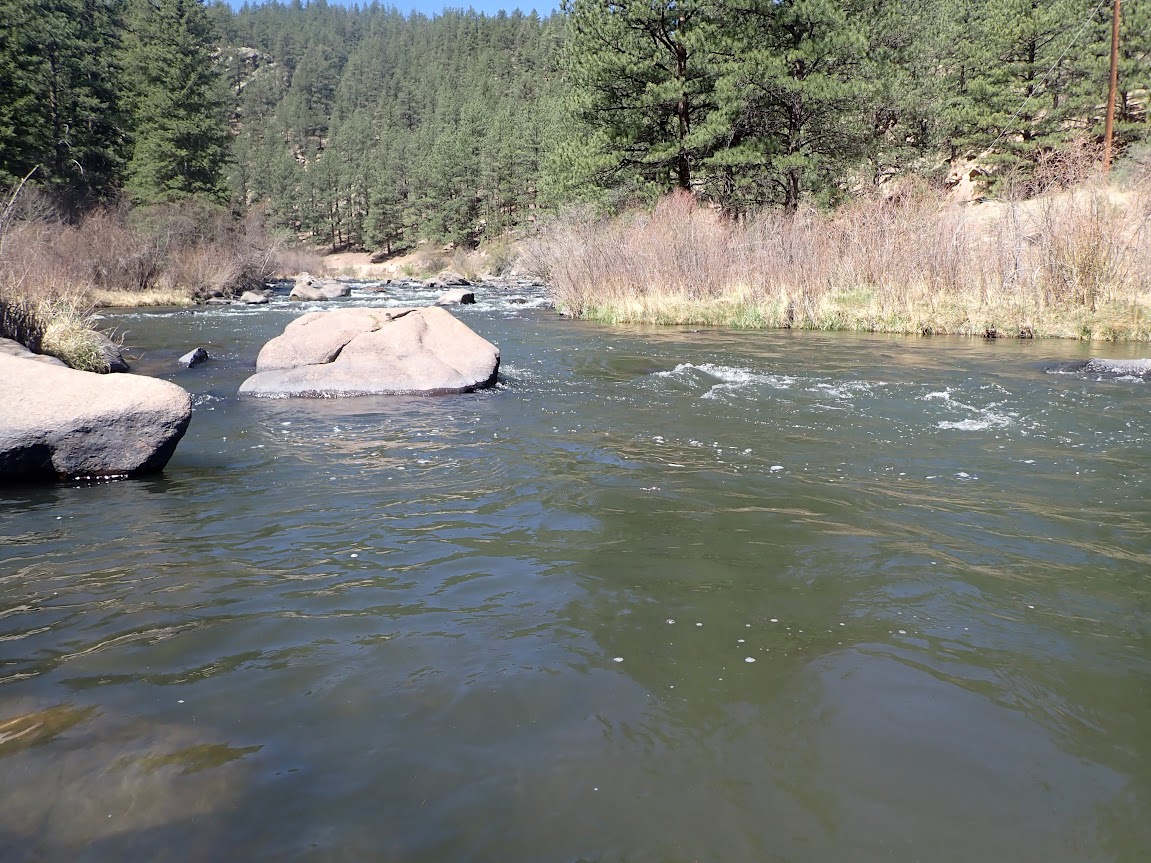 The temperature was in the upper sixties, when I arrived at my chosen pullout along the river, and the high peaked in the low seventies with very few clouds in the sky during my time on the river. Tuesday was nearly perfect from a weather perspective from an angler viewpoint. When I crossed the road to stare at the river, it appeared to be higher than I anticipated, and this eventuality was accompanied by some murkiness. Upon my return to home, I checked the flows for Tuesday, and the chart reflected a gradual climb from 170 CFS to 200 CFS during my time on the river. The increase surely explained the color, although visibility remained reasonable, as the streambed could be seen in all but the deepest pools. In addition to the turbidity I observed an abundant quantity of floating debris, and lots of fly-grabbing sticks were wedged between the rocks. I also encountered a family of tubers, but they exited above me and never became a significant nuisance. 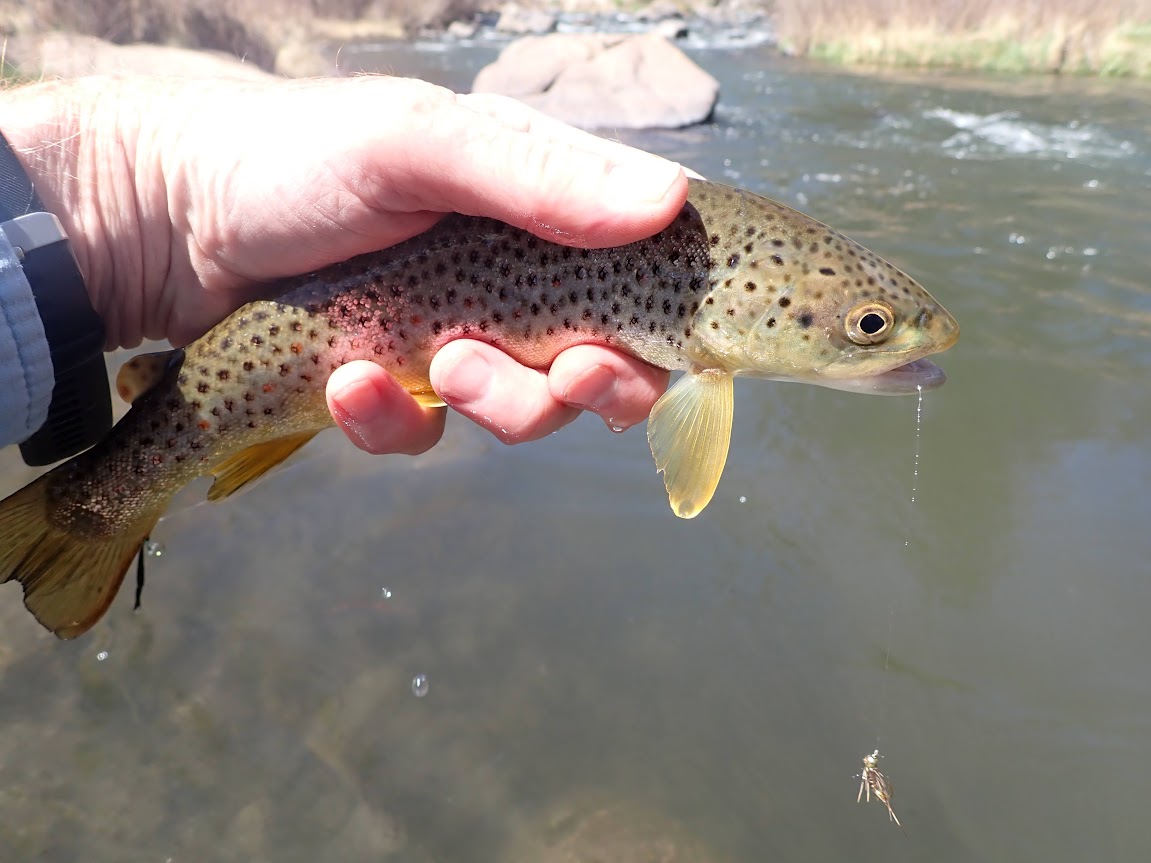 I began my day with a dry/dropper that included a size 8 yellow fat Albert, a beadhead hares ear nymph, and an emerald caddis pupa. In the early going I landed one tiny brown trout that was too small to count and then added a ten inch brown that consumed the hares ear. When I attempted to remove the fly and release the fish, I discovered a snelled hook from another angler in the fish’s mouth, and it was too deep to remove, so I released it in the same state, as I caught it. I felt bad about this, but the fish seemed to be surviving with a hook and leader in its mouth, and I concluded that any effort to dig deep would do more harm than good. 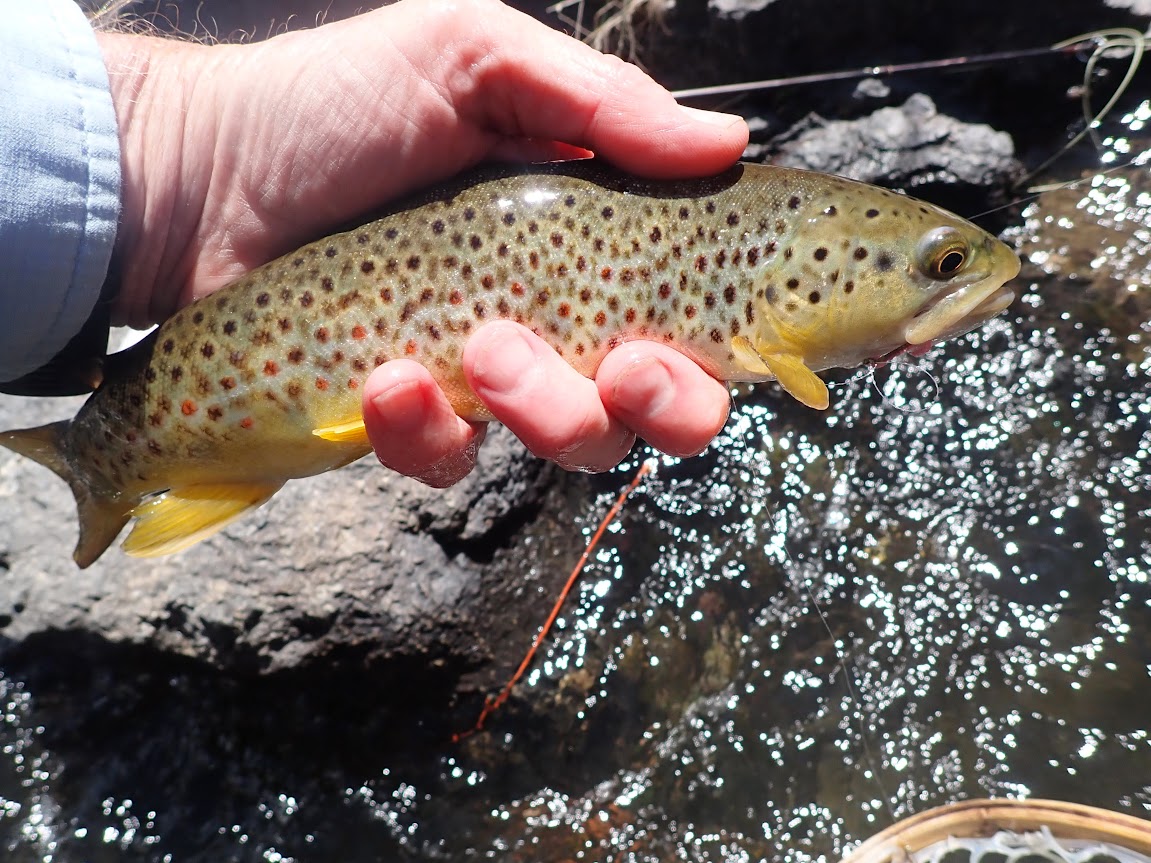 Decent for This Section of River

After a fifteen minute dry spell I exchanged the caddis pupa for a black, beaded mini leech. The leech generated no luck, so I made another switch to a pink San Juan worm in combination with the hares ear. Ka-ching! The San Juan worm clicked and remained on my line over the remainder of the day. By lunch at noon my fish count rested on five, with four brown trout grabbing the San Juan worm, and one brown favoring the hares ear, as explained earlier. 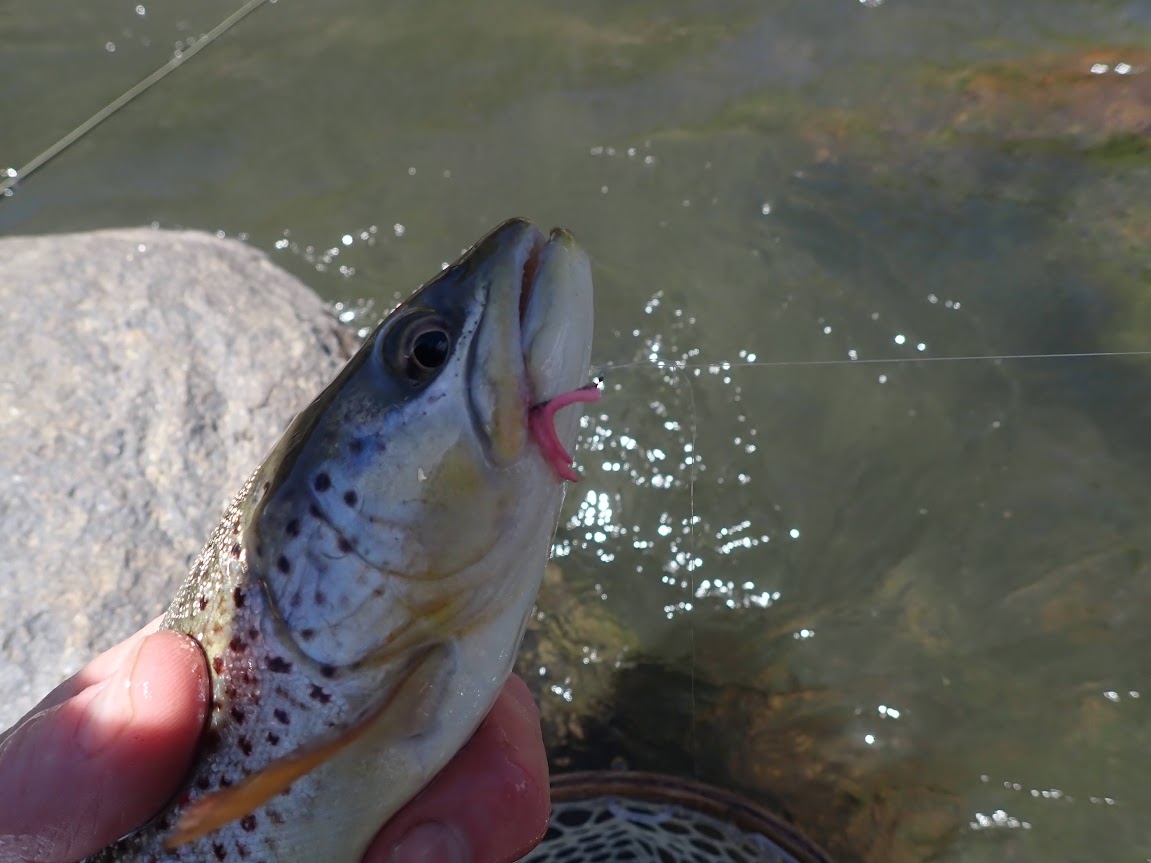 The Worm Was Desired

After lunch I made an overzealous cast and broke off all three flies that comprised the dry/dropper. The flies remained on an island two-thirds of the way across the river, and I was unable to wade into a position to recover them, so I made a mental note of the prominent characteristics of the island and planned to resume a search, once I crossed to the other side at a manageable crossing point.

I used the break off as an opportunity to experiment with a nymphing rig. Early afternoon was blue winged olive hatch time, so I constructed my offering with the pink San Juan worm and a sparkle wing RS2 along with a split shot and New Zealand strike indicator. The nymph set up remained in place for the remainder of my time on the water, and the fish count steadily climbed from five to twelve. During the course of the day the pink San Juan worm accounted for eight trout; the hares ear one, an orange scud fooled one; and a salvation nymph finished out the day with two. A baetis hatch never materialized, and the RS2 was ignored. 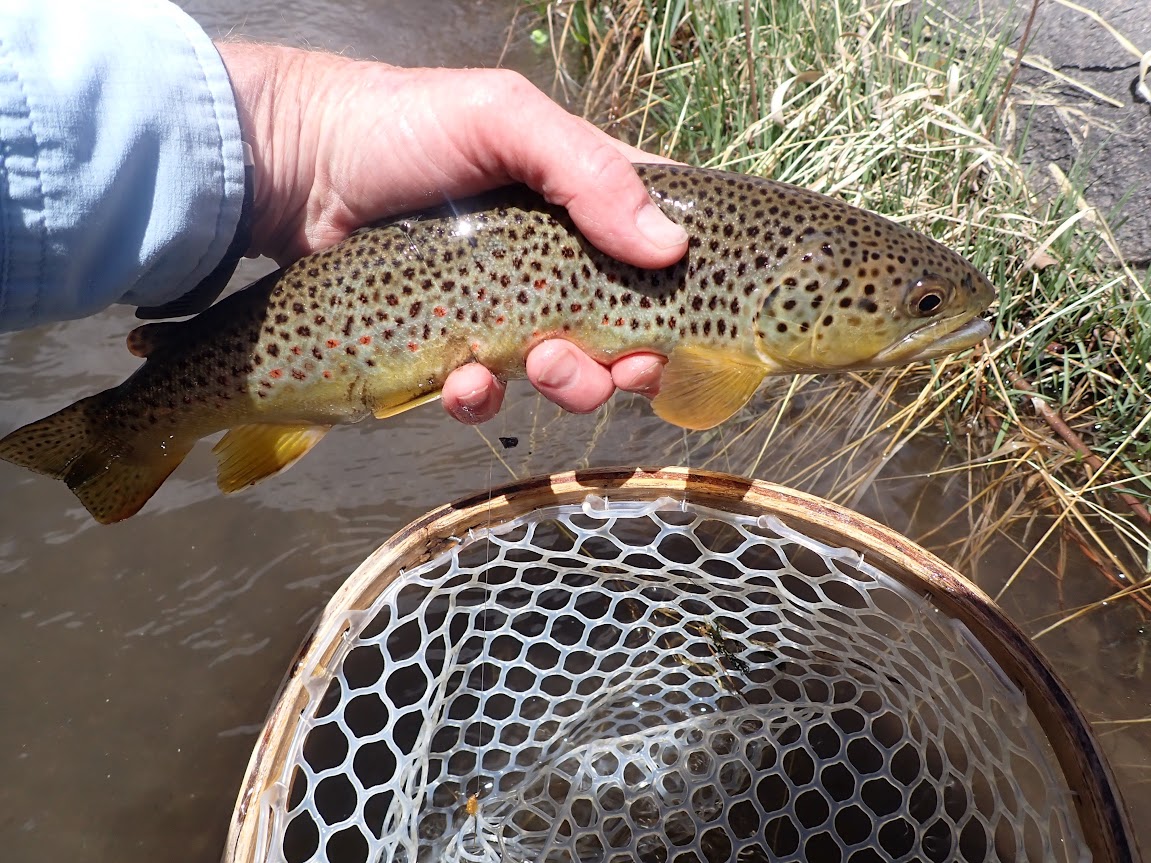 When I reached the area just below Happy Meadows, I reversed direction and crossed the river just above the island, that I planned to search for my flies. I almost forgot and walked a short distance beyond, but then I remembered and descended to the river and crossed a small side channel to reach the small island. I paced fifteen steps to the downstream side and almost immediately spotted the yellow fat Albert and recovered all three flies.

On my way back to the car I stopped to fish some pocket water along the side of the river that bordered the road, and I snagged a large branch. I attempted to leverage the branch within my grasp, but my line broke, and I lost a pink San Juan worm and orange scud. You win some, and you lose some. 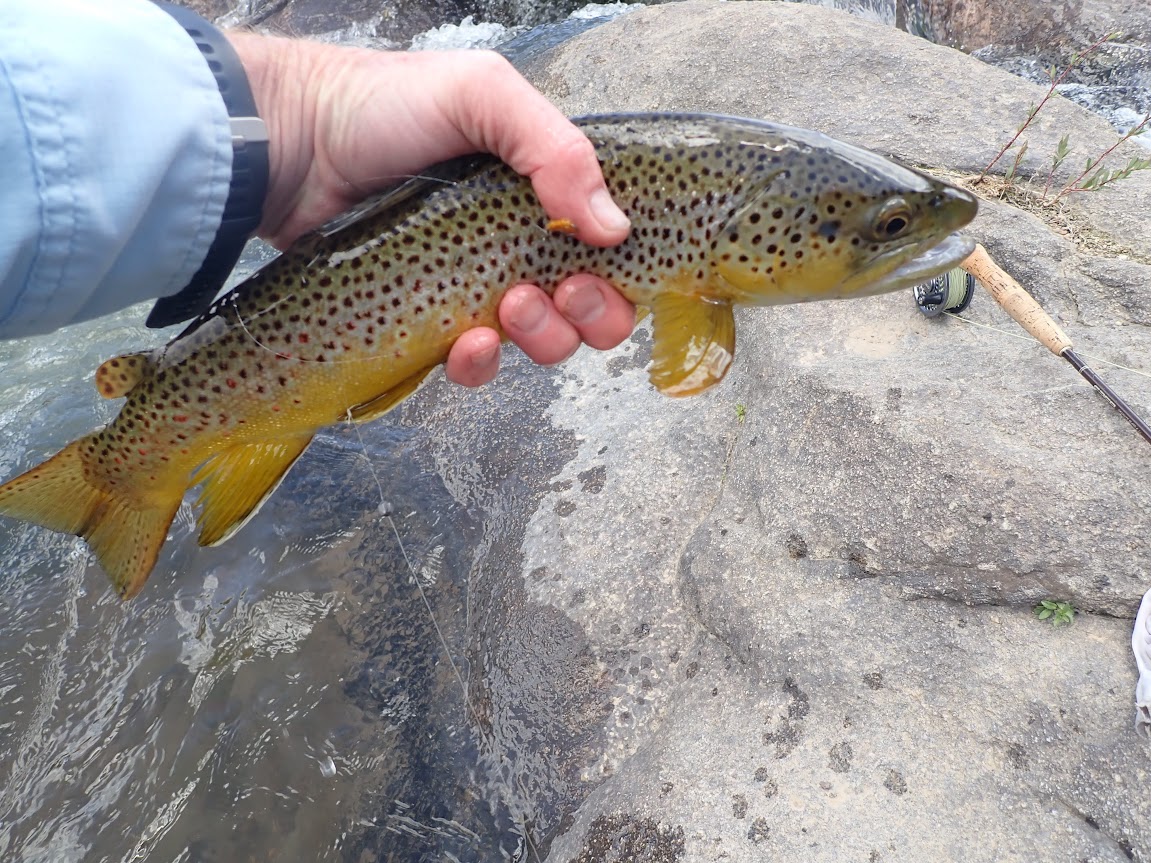 The lost fly incident caused me to retreat to the car, and I drove down the road for .5 mile and parked in a wide pullout next to a high bank above the river. I hiked down the road a short distance and then cut back to the river and worked my way back to the car while drifting a flesh colored San Juan worm and salvation nymph. The salvation fooled one brown trout, and a thirteen inch brown chomped the worm, as it dangled in the current at the bottom of a run,

At 3:30 I reached the upper end of the desirable water in this area, and I decided to quit for the day. I landed twelve decent brown trout on Tuesday, but the fly fishing could not be considered hot. My catch rate was just over two fish per hour, and I considered that average. Nevertheless, I was proud of my persistence and willingness to flex with the conditions to deep nymphing with a San Juan worm. Clearly the rising flows scoured the banks and propelled aquatic worms and earthworms into the river. Over twenty-five years after my love affair with the San Juan worm on the South Platte River, I experienced a revival, and I will not be reluctant to knot a worm to my line, should I once again encounter off-colored water.