I experienced an exceptional day of fishing last Wednesday, April 27, and I was anxious to make a return to the South Platte River, but I also had my eye on the Arkansas River. The caddis hatch began its progression up the canyon, and this suggested the possibility of a double dip with both blue winged olives and caddis on the menu. As a first step to make my destination decision, I checked the weather, and the wind velocity in Salida was forecast to strike speeds in excess of 20 MPH on Tuesday, May 3, 2022. Eleven Mile Canyon was somewhat better with speeds of 14 – 16 MPH in the afternoon. I gambled that I could tolerate the wind in Eleven Mile; and, furthermore relatively heavy cloud cover was predicted from 3:00PM until the evening. Perhaps these conditions would spur another baetis hatch similar to that which entertained me on April 27. I decided to make the trip.

Although my day on the previous Wednesday was outstanding, there was a period just prior to the brief rain storm, when my CDC BWO was not effective. The trout seemed to favor very active naturals, as the wind tumbled the tiny mayflies across the surface of the river. This experience motivated me to tie five new flies on Monday afternoon in an effort to be prepared for high wind and picky trout. In addition to my normal recipe of a CDC comparadun style wing, microfibbet tails, and olive dubbed body and thorax; I added a very small dun hackle wound around the hook shank before and after the wing. I inserted all five of the new flies into my fly box on Monday evening in preparation for Tuesday’s trip. Did they work? Read on.

I arrived at my chosen location high above the South Platte River by 11:00AM, and I immediately pulled on my North Face light down coat. The air temperature at the start was in the low fifties, but the high was projected to reach sixty, so I proceeded with one layer. I assembled my Sage One five weight with the expectation of above average fish and strong winds in the afternoon. I hiked along the dirt road for .4 mile and dropped into the canyon on a short steep trail in order to arrive at the first pool. I named this pool lunch pool, as I typically rest along side the short deep area to eat my lunch. 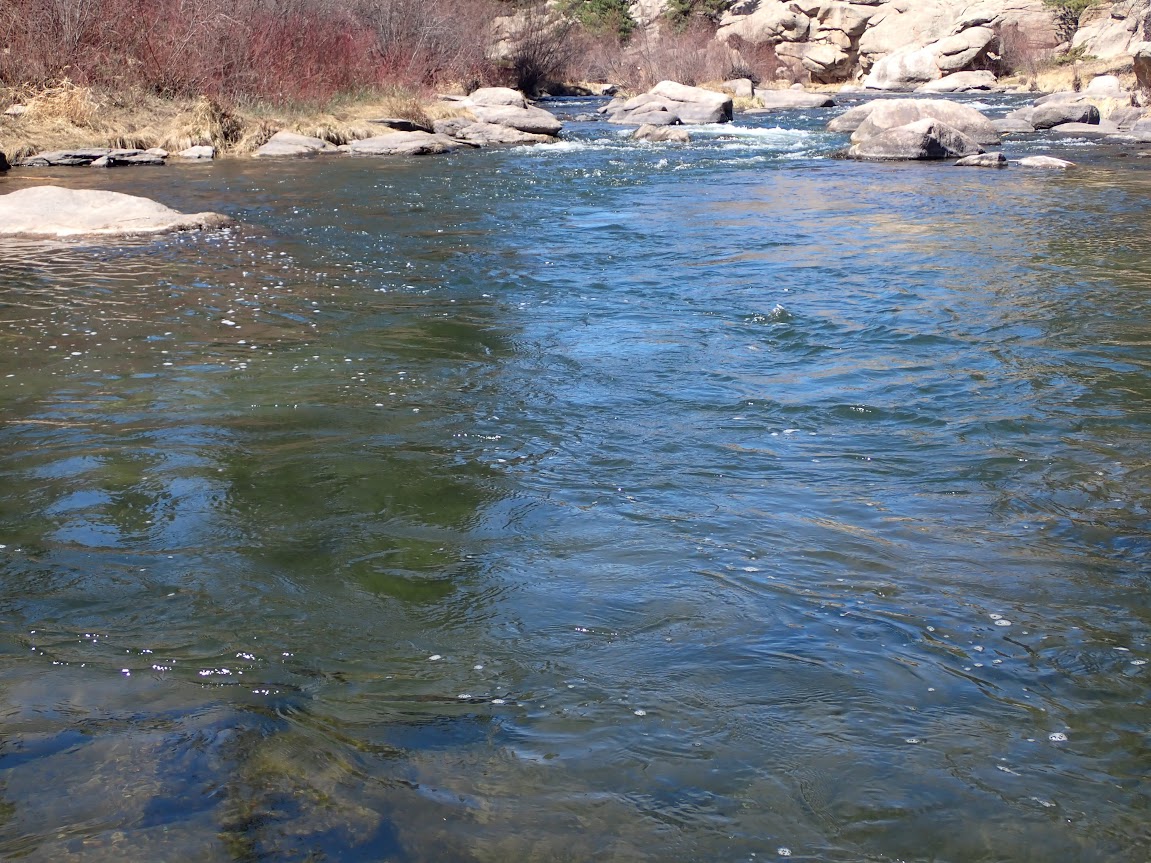 In my mind I was debating whether to rig with a strike indicator and nymphs or to deploy a dry/dropper, when several subtle rises at the very tail of the run aroused my curiosity. Could blue winged olives be hatching this early under clear bright blue skies? I decided to find out, and I knotted a size 20 CDC BWO to my 4X tippet. I was hesitant to extend the leader with 5X, in case I decided to return to the dry/dropper approach in short order. The move proved to be a winner, and I landed two trout in the first half hour on the CDC BWO. A brown trout sipped the BWO imitation from the very tail of the run, where it began to curl toward the shoreline to form an eddy. The second netted fish was a fourteen inch rainbow, and it darted to the surface from the deepest spot in the eddy to ingest the CDC BWO. I broke for lunch at 11:45AM with two nice trout notched on the fish counter. I observed the pool during lunch, and a few sporadic rises resumed in the tail and eddy, so I returned to the scene of my morning success. Alas, in spite of some focused fishing, I was unable to recreate the magic, and I decided to modify my approach. 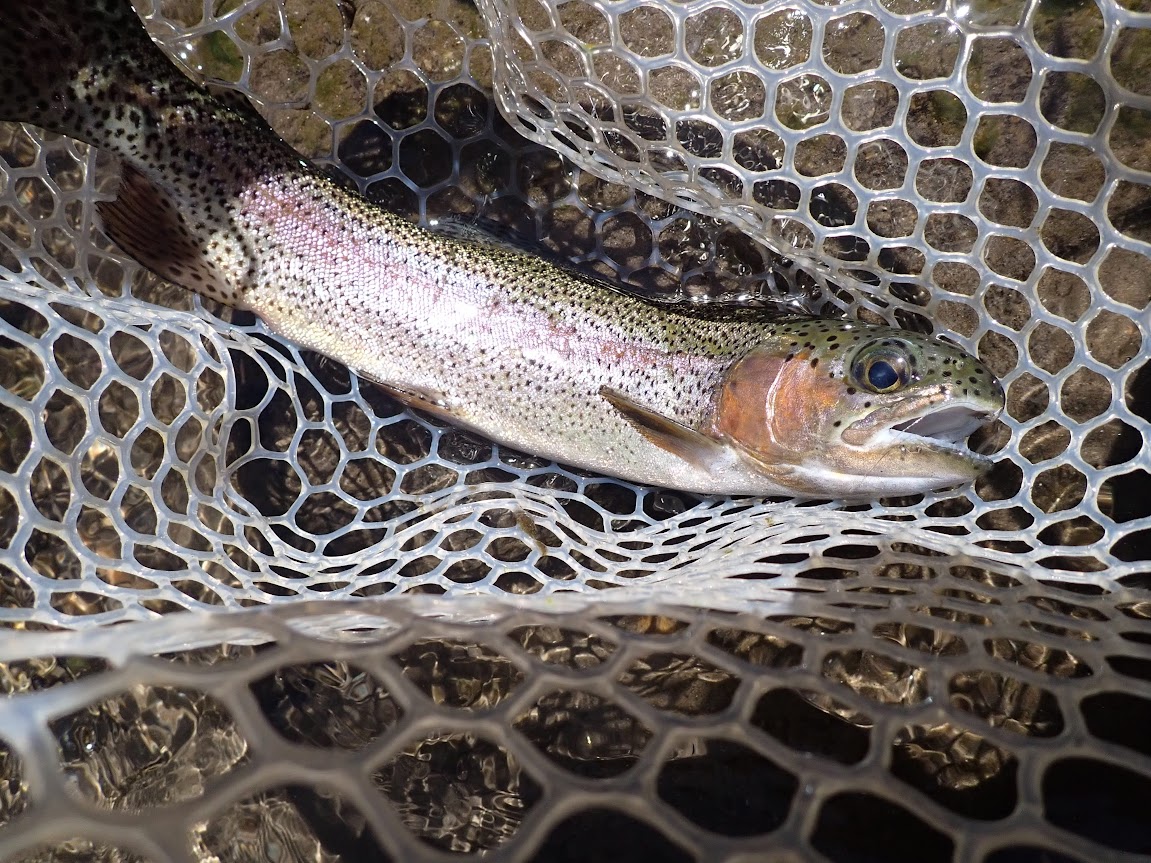 The upper section of the pool was characterized by a long faster moving riffle, and I was skeptical that the minute single dry fly would function as a prospecting weapon, so I reconfigured with a size 8 yellow fat Albert, beadhead sparkle wing RS2 and a non-beadhead soft hackle emerger. I created a fairly short dropper system, as I suspected that the fish were hovering just beneath the surface looking for active nymphs and emergers. My thought process was sound, but the dry/dropper approach was a huge dud, and I moved up the river to the next inviting pool. Two other anglers were present during my morning efforts, during lunch and during the short window thereafter; but as I approached the long smooth pool, I was pleased to discover that it was vacant. I immediately claimed the extreme upstream section, where the main current split around a large exposed rock, and I covered the entry runs thoroughly with the BWO nymph and wet fly. The trout ignored my offerings, and I concluded that my theories were not applicable on May 3. 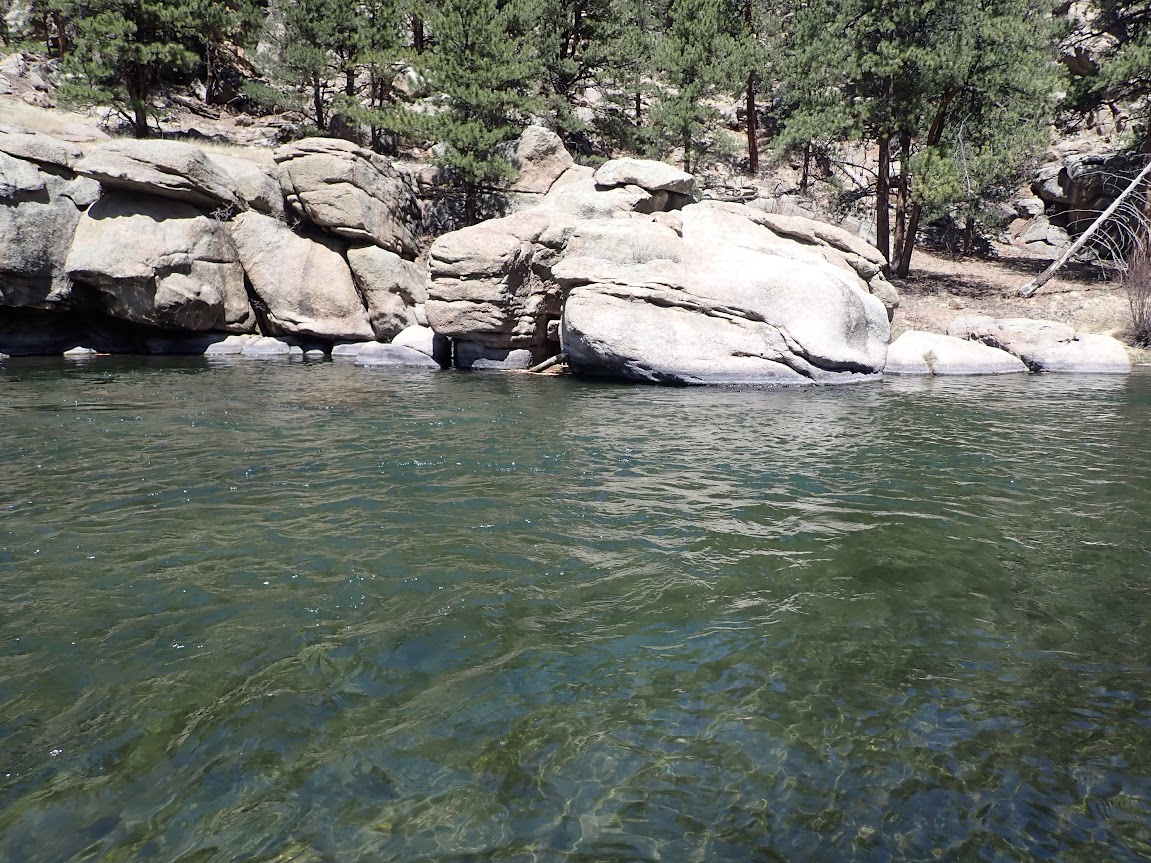 As the trout taught me this lesson, I began to observe some sporadic rises through the center of the pool, where the twin currents merged and then fanned out to the slow moving tail. I removed my dry/dropper system and tied on another CDC BWO. The pace of rises never accelerated beyond sporadic in the bright sunshine, but when I noticed a rise and placed a drift over the feeding spot, I was able to hook and land three mid-sized brown trout. 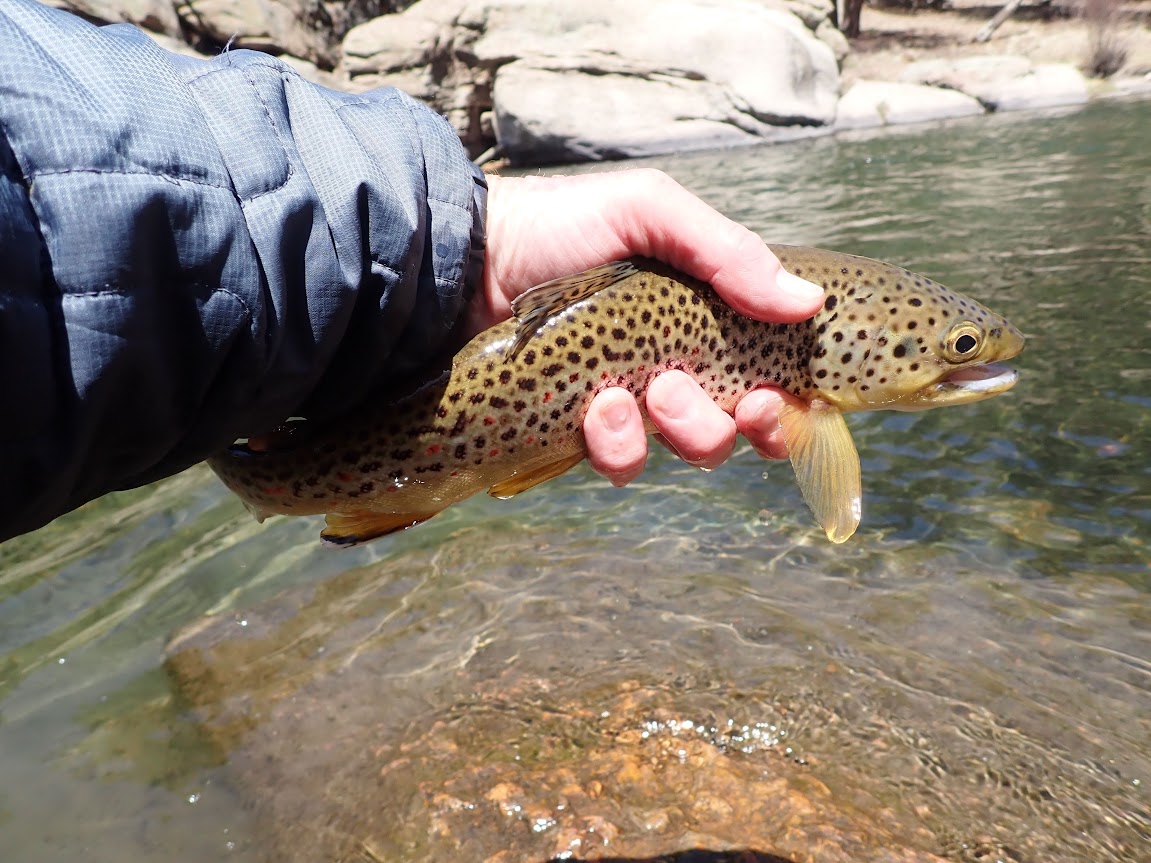 For the remainder of the afternoon I visited three additional pools and upped the fish count from five to fourteen. Wednesday’s fly fishing adventure was quite different from April 27, when I enjoyed dense hatches in waves that brought large numbers of ravenously feeding trout to the surface. On Tuesday, the wind would kick up, and this in turn sparked a very sparse hatch and sporadic rises. I made a huge quantity of casts and covered a ton of real estate to carve out a very satisfying day on the South Platte River. 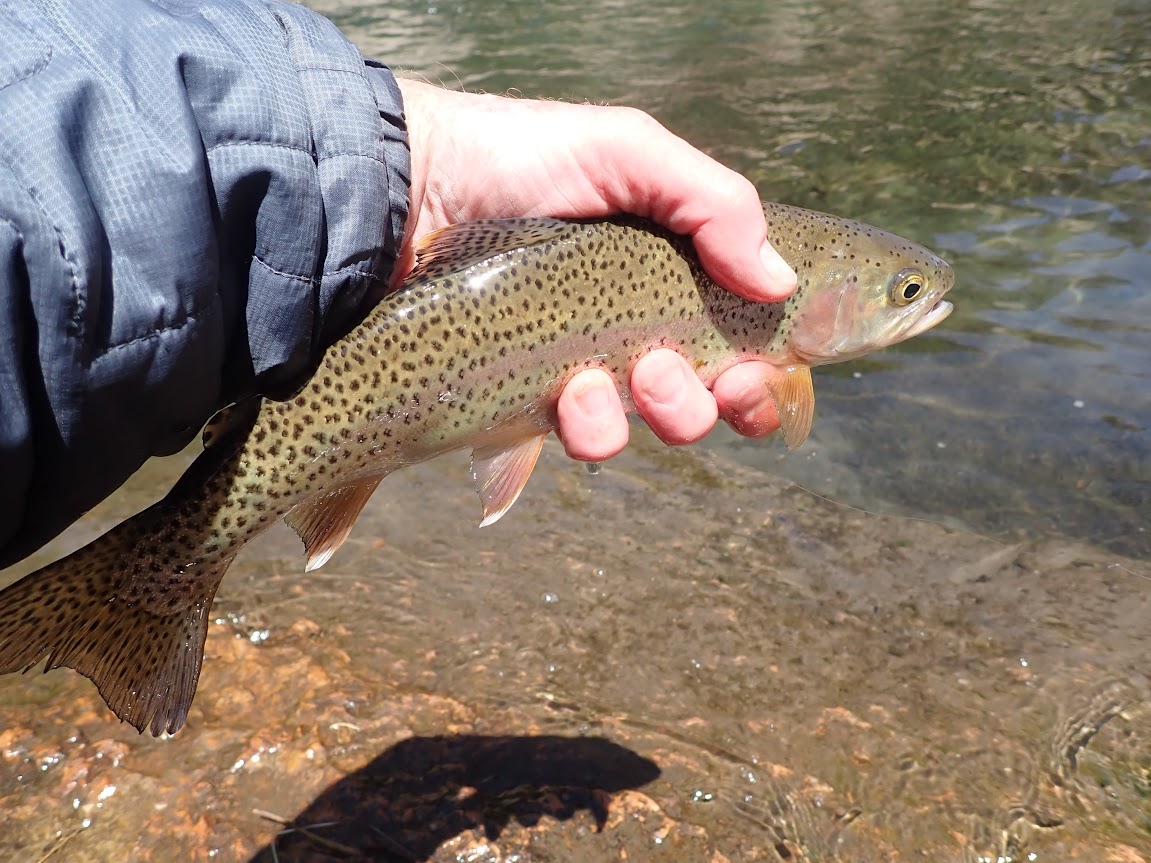 My next pool was the one below Steve’s pool, where the strong main current runs along the eastern bank and then deflects off a huge boulder with a vertical side. I managed to land two from this location on downstream drifts, and I replaced the soggy CDC BWO with one of my new hackled CDC BWO’s. It worked for one fish, before I hooked another that felt heavier than the previous catches, but this fish made a sudden turn and snapped off my new creation. 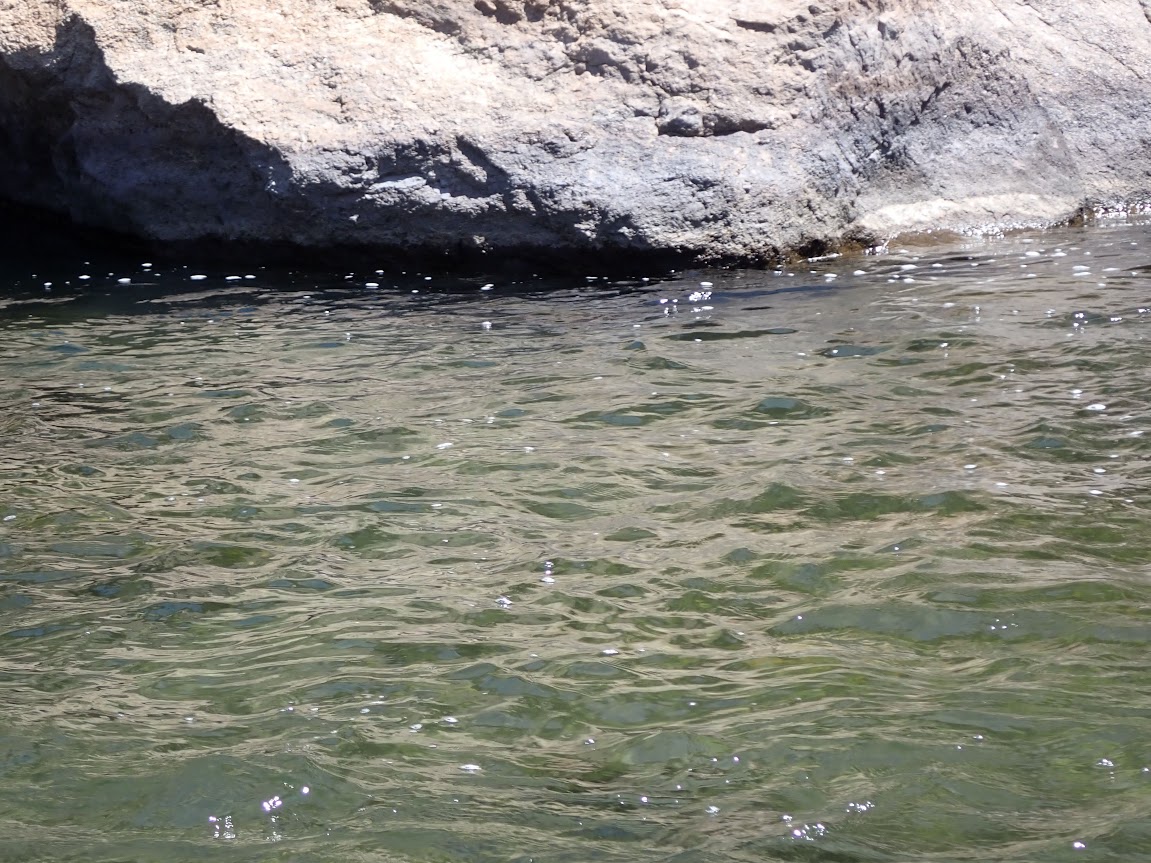 Riser Tight to the Rock

One angler occupied Steve’s pool, so I waded around the bend and passed the narrow island to investigate the slow and smooth pool along the left bank above the island. Another fisherman beat me to it, so I moved above him and spotted some nice feeders on my side of the river. I managed to land a nice brown trout and connected briefly with another pair, before I moved on. My next stop was another gorgeous pool that spread out around some exposed boulders and then made a wide smooth tail section. I headed immediately to the deep entering currents, and I paused to observe for awhile. The sun was out, and the air was relatively dead, but I was able to spot two very subtle dimples along a current seam, and these observations translated into two nice rainbow trout in the thirteen and fourteen inch range. I now achieved double digits, and I was pleased with my day regardless of what the future offered. 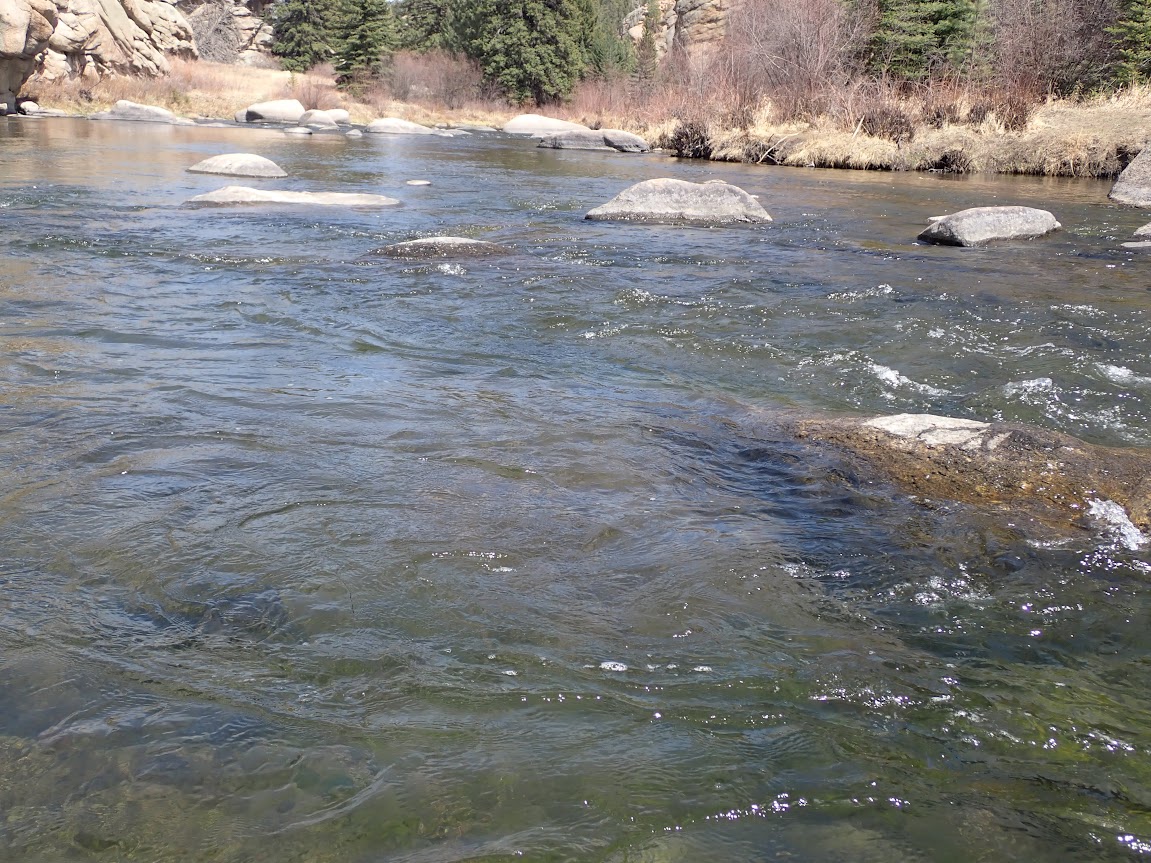 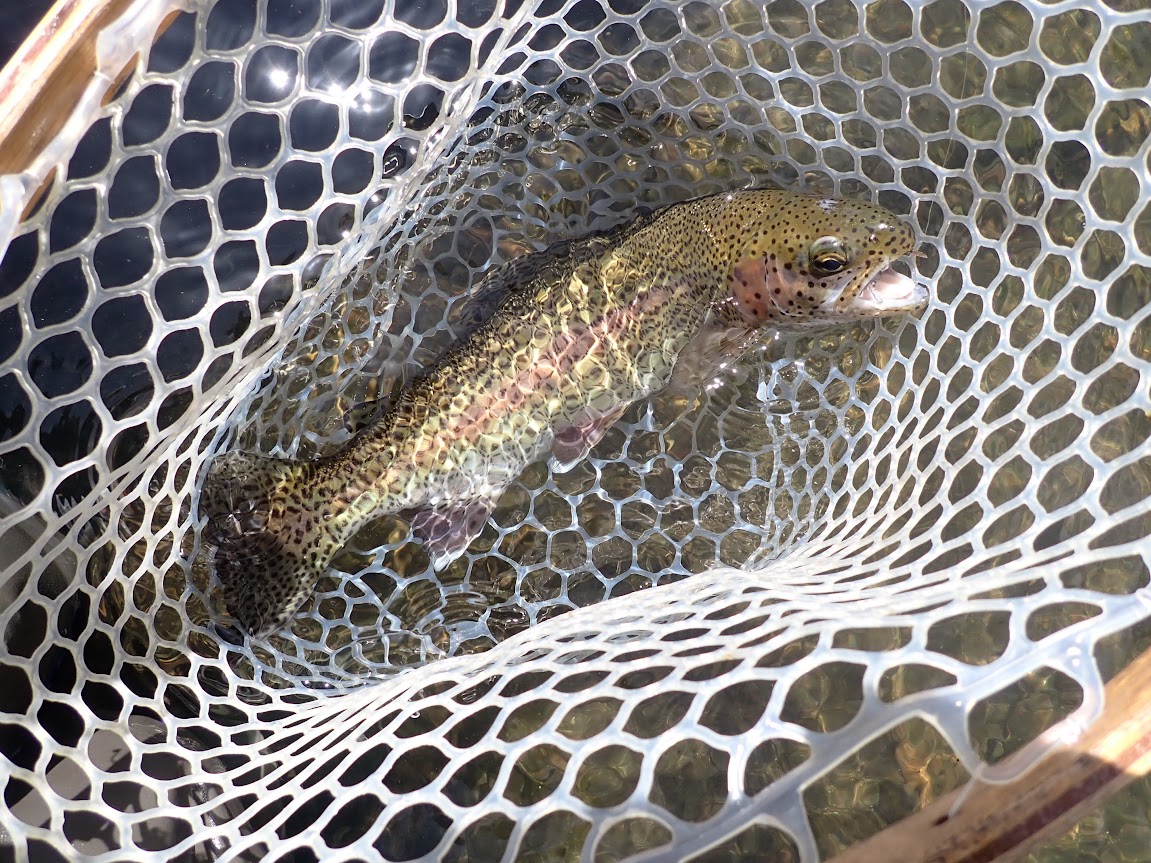 The next area consisted of pocket water, and I was seeking slow, smooth pools in order to pick off BWO surface feeders, so I reversed direction and returned to the scene of much success on April 19. This was also the area occupied by another angler earlier, as I approached from below. I carefully waded into position from the western bank and stood in relatively shallow water with a nice sandy bottom. As I suspected, trout were dimpling the surface throughout the twenty-five yard long pool. By now, as predicted, the cloud cover thickened, and the light diminished, and the wind kicked up. My feet were migrating into frozen stumps, and a slight chill invaded my body. I began lobbing casts to the feeding lanes, where trout revealed their positions via greedy rises, but my low riding CDC BWO was mostly ignored. After a large number of casts, I finally connected with a fine trout to move the fish count to eleven, but the number of feeding fish compared to my single success suggested that I had not solved the feeding riddle. 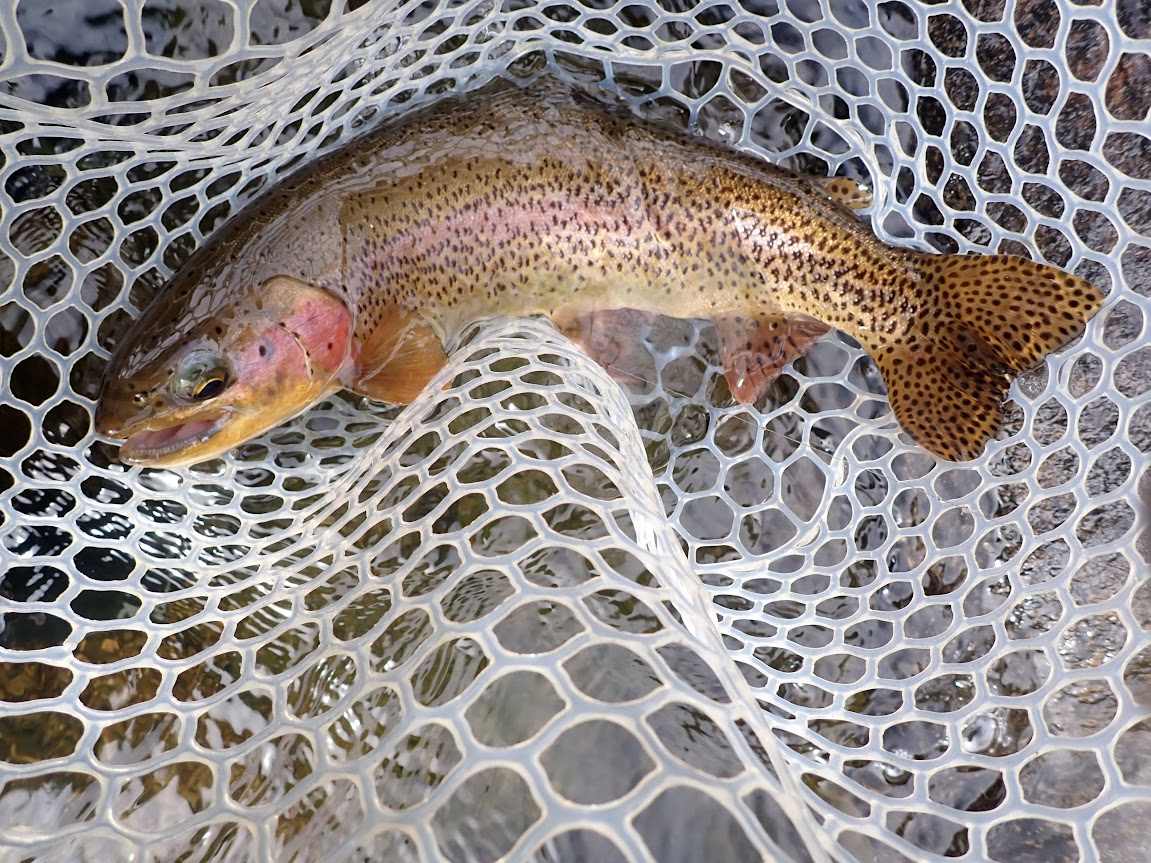 Deep Colors on This Beauty

I paused to assess and realized that these were the very conditions that I attempted to solve with my hackled CDC olives. I plucked one from my fly box and knotted it to my 5X tippet and resumed casting. Although I continued to experience my fair share of futility in the form of looks and refusals, I did hook and land three very nice fish on the hackled BWO. The hackles enabled the fly to ride higher on the surface of the river, and to my angler eye, it more closely resembled the natural baetis that tumbled and bounced along the surface in the face of the strong gusts of wind. In one instance, I twitched the fly with a jerky mend, and one of the landed trout responded with a quick eat. 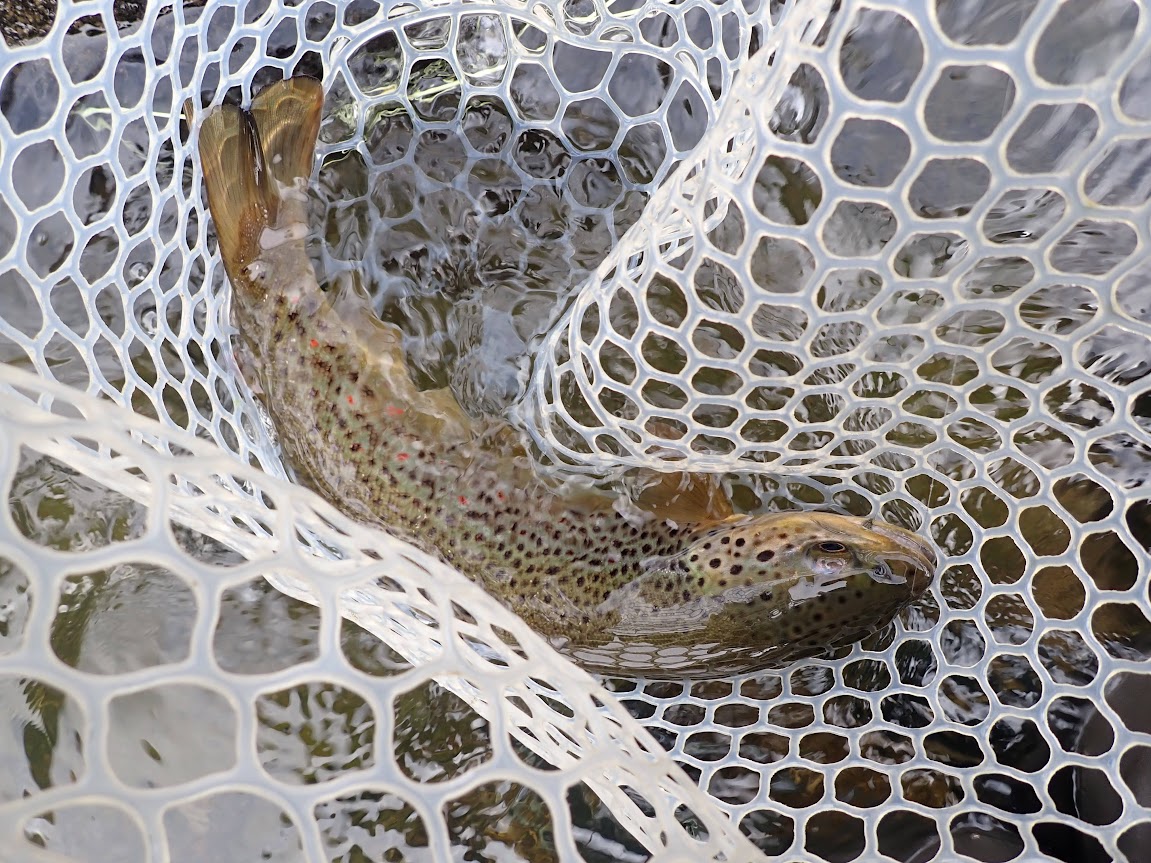 Although Tuesday, May 3 yielded fewer trout, and the quality of the hatch was inferior to April 27, I still rated the day as excellent. Success required patience, persistence and keen observation. Downstream casting and mending skills were a necessity, and frequent drying and application of floatant were keys to success. The most gratifying aspect of the day was my ability to utilize my new hackled CDC BWO fly to fool and land three very fine trout in the last hour of the day. I will certainly tie more.