After catching seven tiny brown trout from Boulder Creek on Monday, I was itching for some more substantial quarry on Wednesday, April 27, 2022. I considered the Arkansas River, and the forecast temperatures were to my liking in the upper sixty degrees, but the wind velocity in the afternoon was projected over 20 MPH. The South Platte River in Eleven Mile Canyon was my second choice, and the wind speeds there were more tolerable in the low to mid teens, but the high temperature was expected to be in the low sixties. I have endured colder days than that in the canyon, so I made Eleven Mile my destination. The other weather factor that caught my attention was heavy clouds for most of the afternoon. In my mind this suggested blue winged olive mayflies.

I departed Denver at 7:35AM and arrived at my target pullout by 10:15AM. Initially I pulled on my fleece cardigan and North Face light down coat with the temperature at 50 degrees, but I felt too warm and shed the light down. I reasoned that I could always pull my raincoat out of my backpack for a windbreaker layer, if I got too cold. My rod of choice was my Sage One five weight. I hiked up the road for .3 mile, until I found a reasonably manageable path down the steep bank from the road to the river. My starting point consisted of a series of deep pockets around exposed boulders, and the flows were a nice 125 CFS. I rigged my five weight with a New Zealand strike indicator, split shot, ultra zug bug and RS2 and began prospecting all the slower moving but deep spots around the boulders. During this early time period I landed a very nice rainbow trout of approximately fourteen inches and a small brown trout. The rainbow snatched the RS2, and the brown grabbed the ultra zug bug. 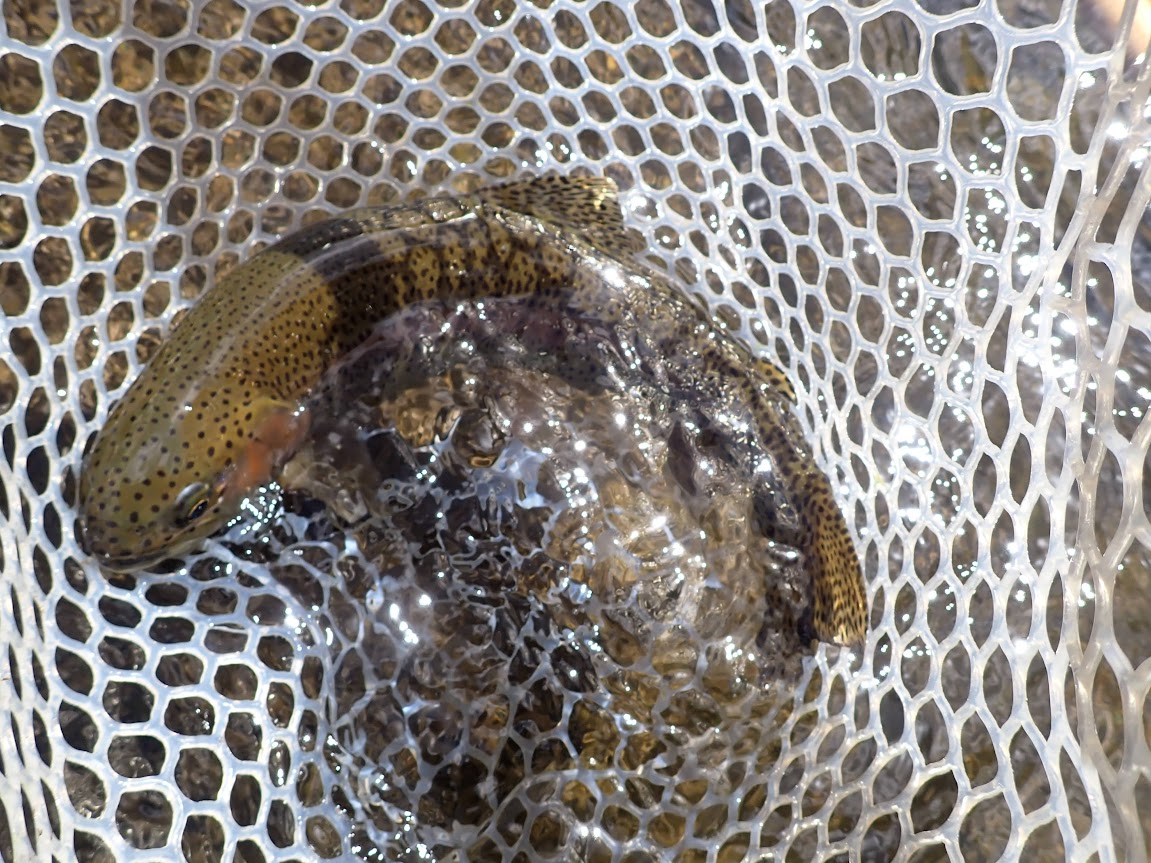 The rest of my day could be described as the tale of three pools. The next nice pool above the pocket water was my typical break point for lunch, but I arrived earlier than usual because of my 10:45 starting time. I worked my nymphs thoroughly through both sides of the deep run, but I was unable interest any residents in my offerings. This was abnormal, as I can usually count on a fish or two from the lunch pool area. I swapped the ultra zug bug for a beadhead black mini leech and replaced the RS2 with a sparkle wing version. The move failed to change my luck, and I progressed to the next pool, which is one of my favorites on the river. It is quite long, and the main current splits around a large exposed rock at the head of the pool, before it fans out in the center area. The bottom half is a wide and deep, smooth pool. I positioned myself next to the upper and middle section and sat down to consume my lunch. When I called my day the story of three pools, this one was number one. 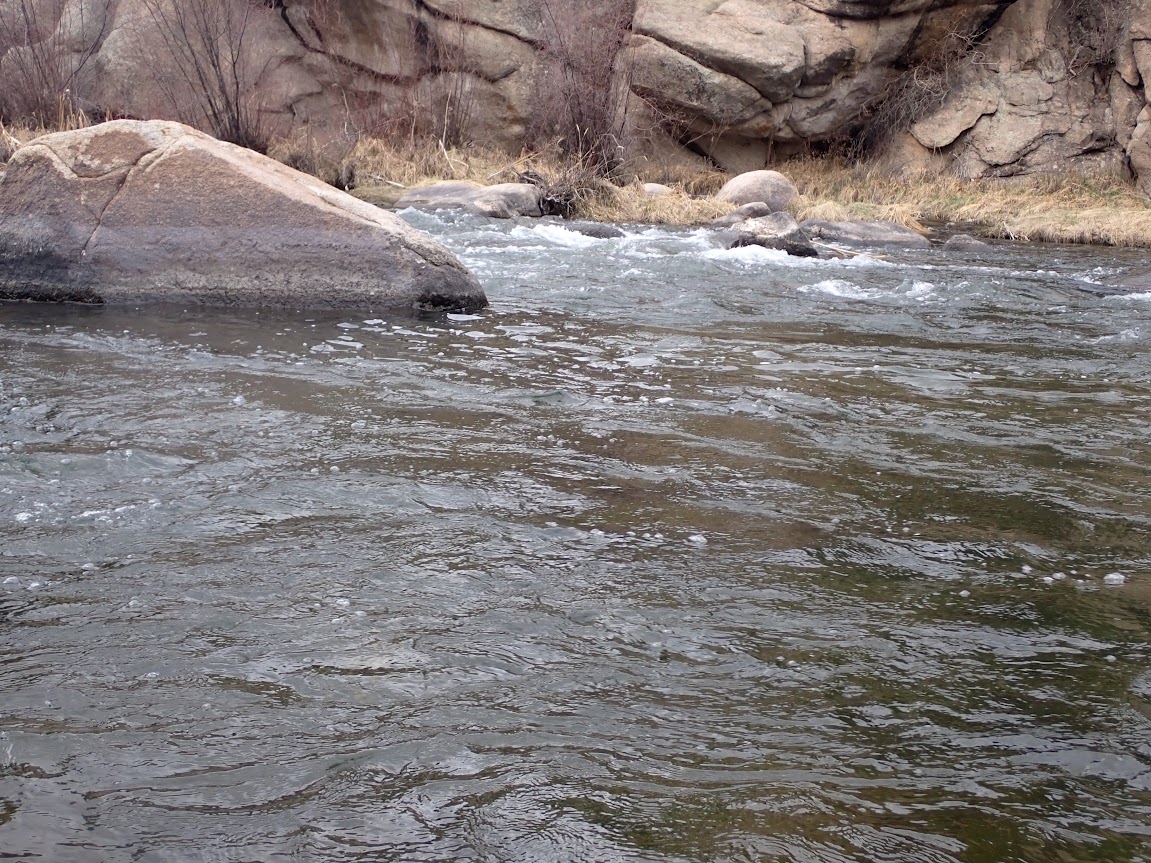 Off the Point of That Rock Produced

As I ate my lunch , I spotted numerous rises around the head of the pool and continuing down to the midsection. My pace of chewing elevated, and I skipped my yogurt in my zeal to fool eagerly feeding trout. Just as I was beginning to cast a CDC BWO, an older couple arrived , and the man motioned to me asking for permission to fish the tail of the pool. I gave him a thumbs up, but I wondered why he could not find another spot given the relatively light presence of anglers on a Wednesday. 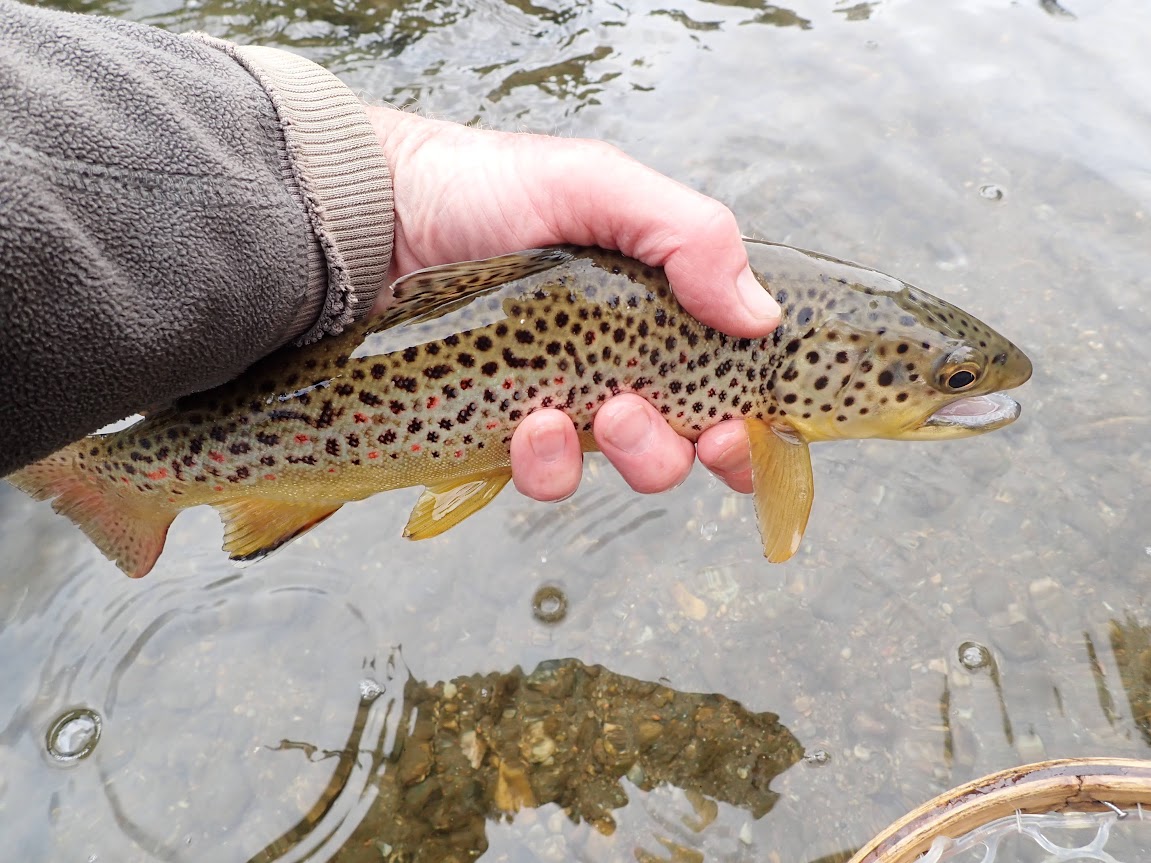 Initially the preponderance of rising trout ignored my CDC BWO, so I switched to a Klnkhammer emerger, and it clicked for three twelve inch brown trout, but the trout’s teeth cut the delicate parachute hackle on two flies, so I switched to a new CDC BWO with a thicker CDC wing than the first fly I tried. I was concerned that I would quickly deplete my supply of four Klinkhammer emergers. The CDC BWO with the thicker wing did the trick, and I landed seven more trout from the long pool, while Bruce and Sandy looked on. 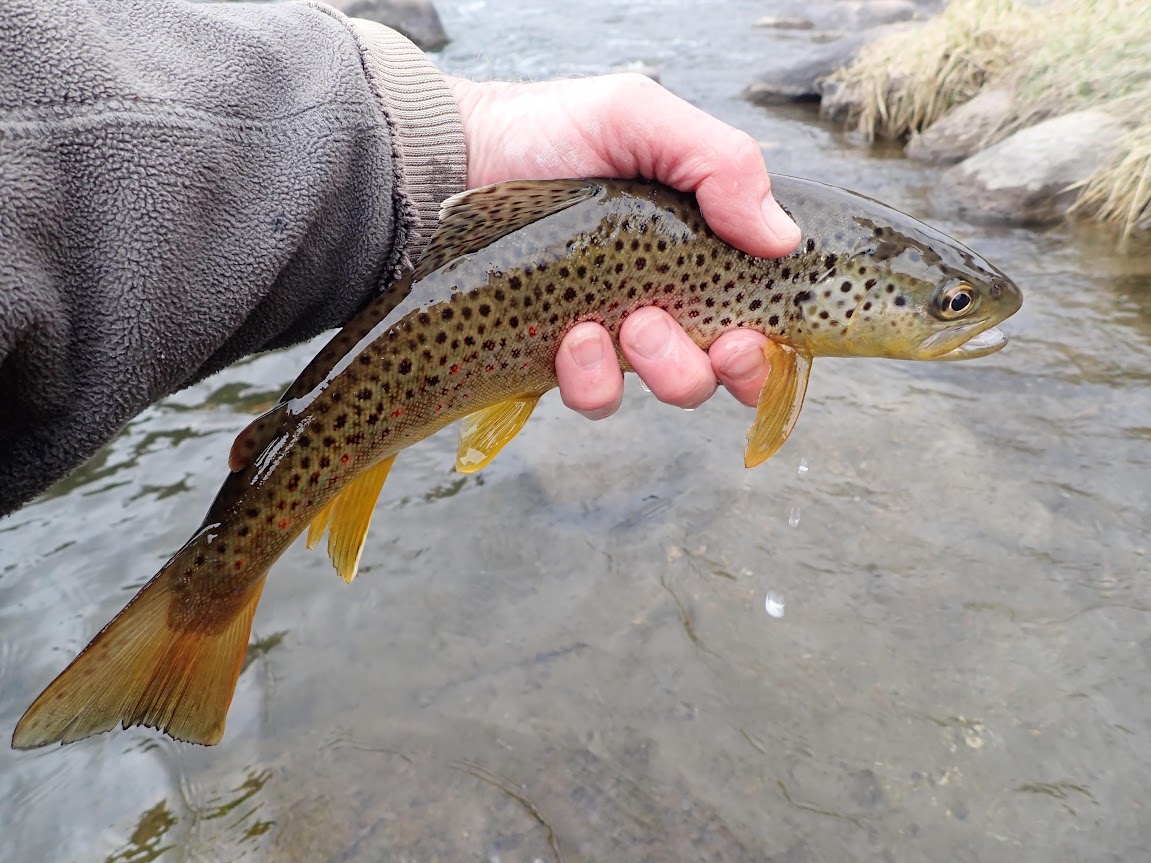 Number ten was memorable, as I spotted several subtle rises off the point of the large exposed rock that split the incoming current. I dropped several casts off the point, and on the third attempt a fine fourteen inch brown trout slurped the CDC olive. The take was very visual and very gratifying after discerning the subtle rises.

The sun appeared and the frequency of rising trout waned, so I decided to abandon the long pool and seek other opportunities. I was interested to know whether the olives were emerging in other spots throughout the South Platte system in Eleven Mile. I walked back to Bruce and Sandy and relinquished the pool to them. I intended to inspect Steve’s pool, the pool on a ninety degree bend below the tunnel, but first I came to a smaller pool just below Steve’s with a large rock wall along the east side. I crossed the river below this point and paused to observe, while two anglers occupied Steve’s. Quite a few rises appeared throughout the length of the pool, so I decided to approach from the west side with across and downstream drifts. This was pool number two of my day of three pools. 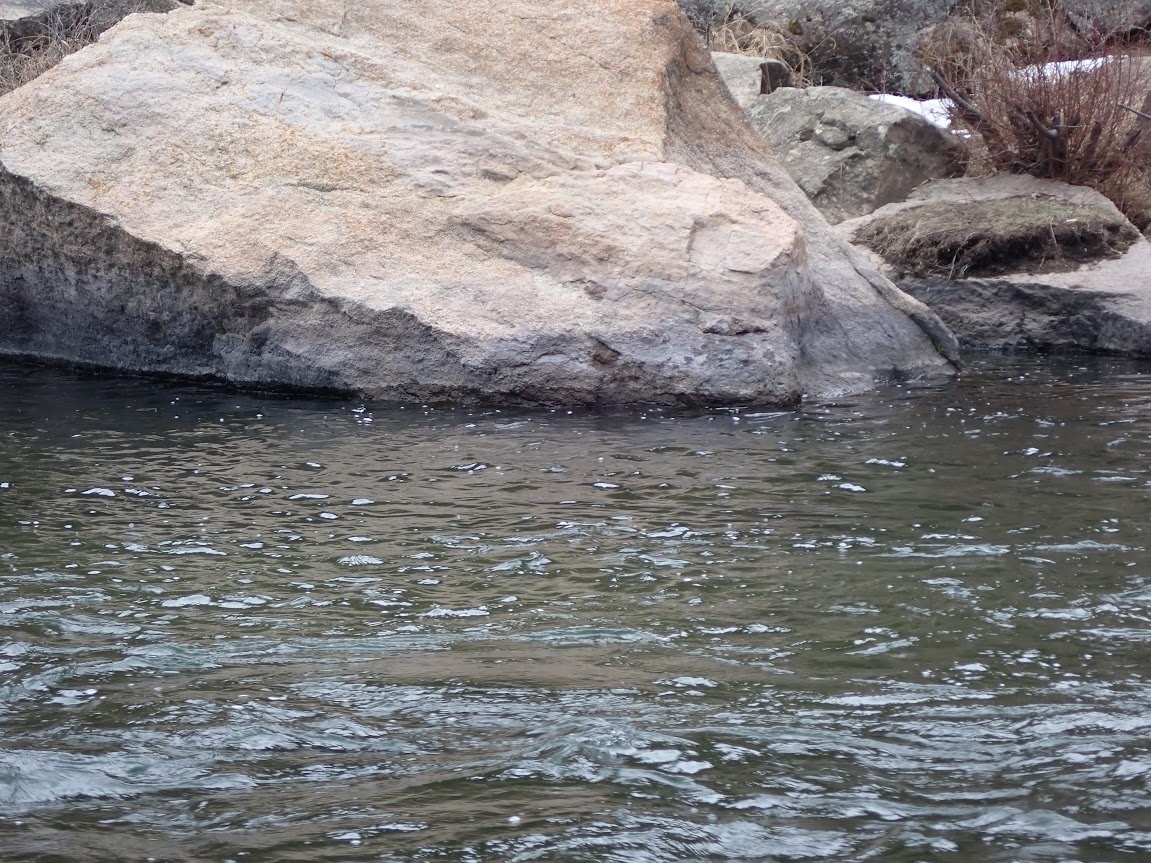 Rises Tight to the Rock Wall 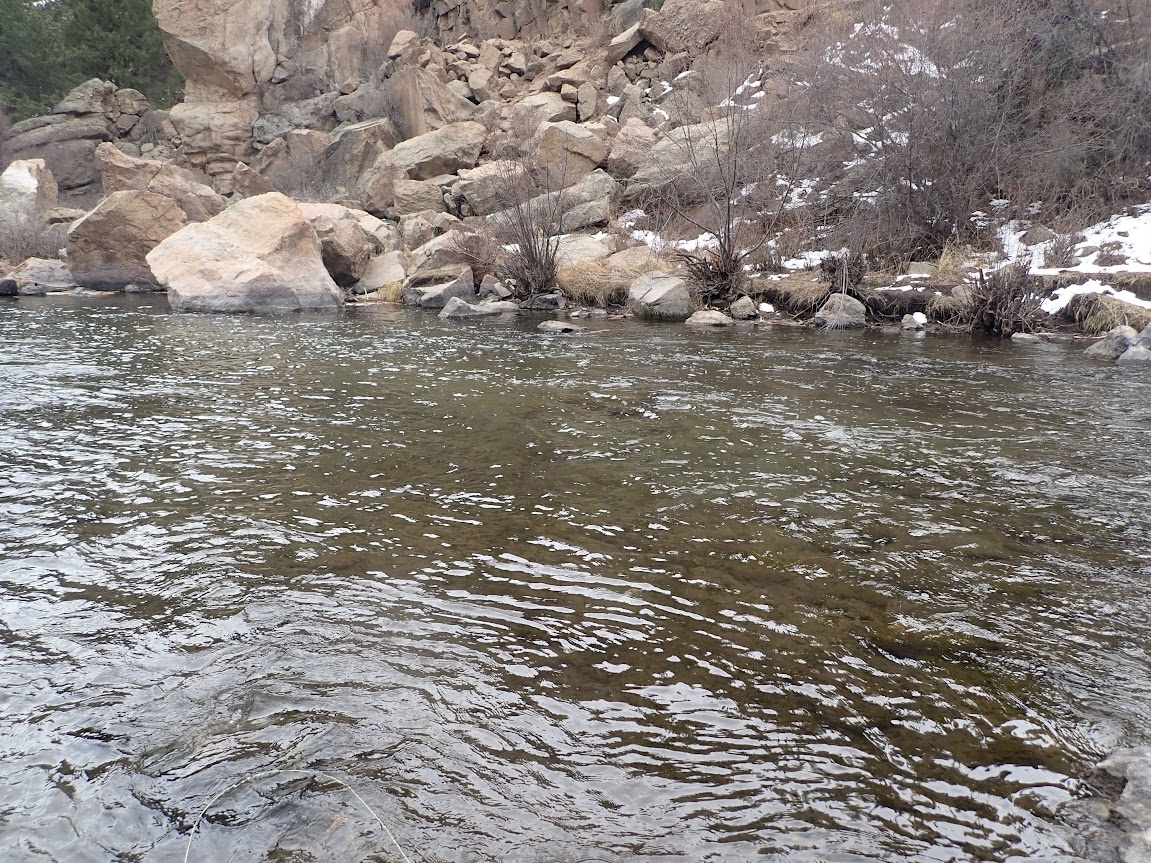 Feeding Trout Along the Opposite Bank

My approach paid dividends, as I landed five additional brown trout to boost the fish count to fifteen. In this pool my conversion rate suffered compared to that of pool one, as each fish landed required a far greater number of casts, but persistence paid off.  During this time the wind kicked up, and the sky darkened, and two of my takes occurred as I twitched the fly with a bad mend, or drag set in near the downstream extension of the drift. The mayflies by now were emerging in fairly dense quantities, but they tumbled and skipped along the surface as a result of the frequent gusts. My casting and disturbance of the water with thrashing fish eventually put down the pool residents except for some cagey veterans along the rocky shoreline on the opposite bank, so I waded up the river to Steve’s pool. 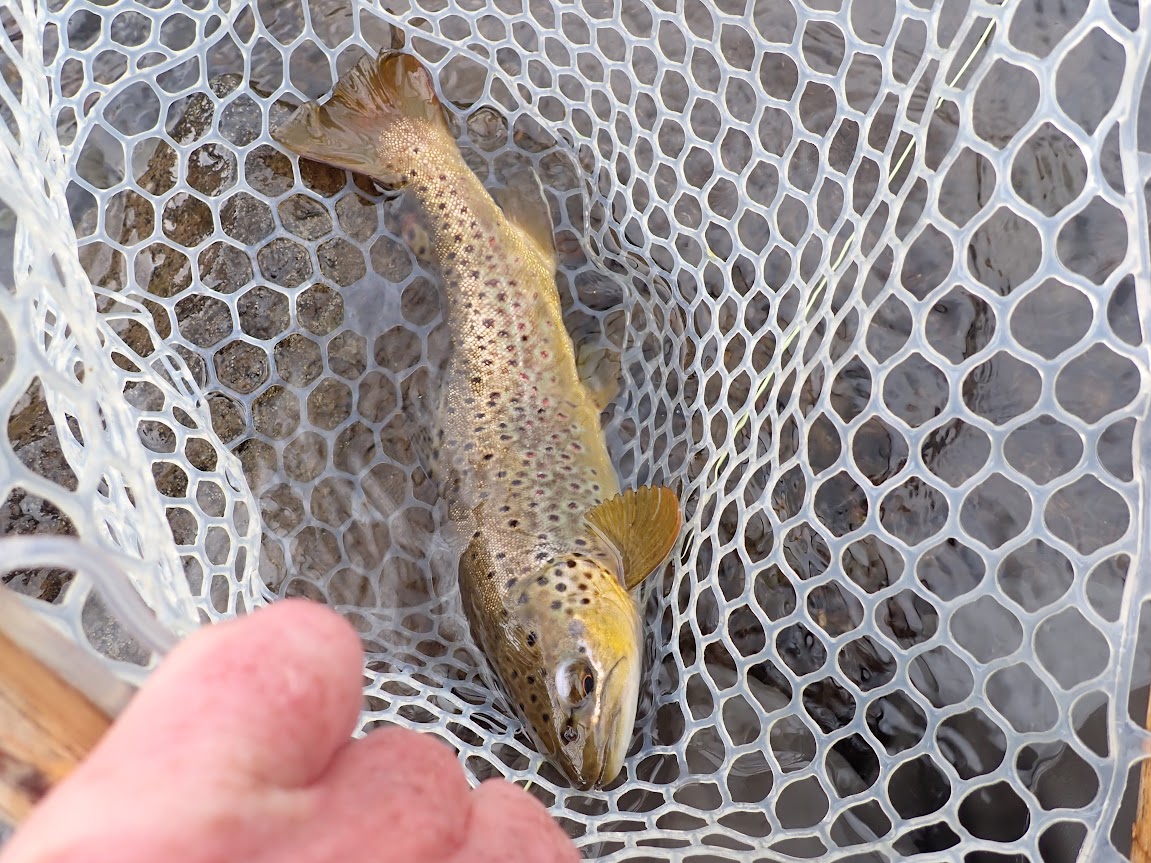 In a stroke of good fortune the two occupants of Steve’s pool reeled up their flies and abandoned the gem of Eleven Mile, thus leaving it vacant for this eager angler. By now the sky darkened even more than previously, and the wind velocity accelerated, and my wet hands from releasing fish in pool two stung from the rapid evaporation. I moved to the riffles at the entry point to the pool, and the river came alive with rising fish. I could easily see twenty fish within my range, as they rapidly darted to the surface to snatch helpless blue winged olive victims. I made some nice downstream drifts and managed to land four trout during this time frame, but my success rate was actually rather poor given the feeding binge that transpired on my side of the pool. Looks and refusals far outnumbered takes, as my stagnant fly was one among the hundreds that blanketed the river. As this event unfolded, rain began to fall, so I had to retreat to the bank, where I removed my front pack, backpack and camera and pulled on my raincoat. The temperature dropped ten degrees, and I chastised myself for forsaking the North Face down coat. Eventually the electricity of the dense hatch subsided, the rain stopped and the dark cloud moved to the east. The nearby area that was a sea of frothing rises suddenly appeared to be vacant of trout with only a few very sporadic feeders through the long and wide pool. My feet were frozen stumps, my hands were gnarled and stinging, and a chill ran up and down my spine. I decided to call it quits and wandered to the tail of the pool to begin my crossing to the east side next to the road. Before I stepped in the river; however, I gazed across the extreme tail and spotted a pair of rises in fairly shallow water. Could I tease up one of these feeders? 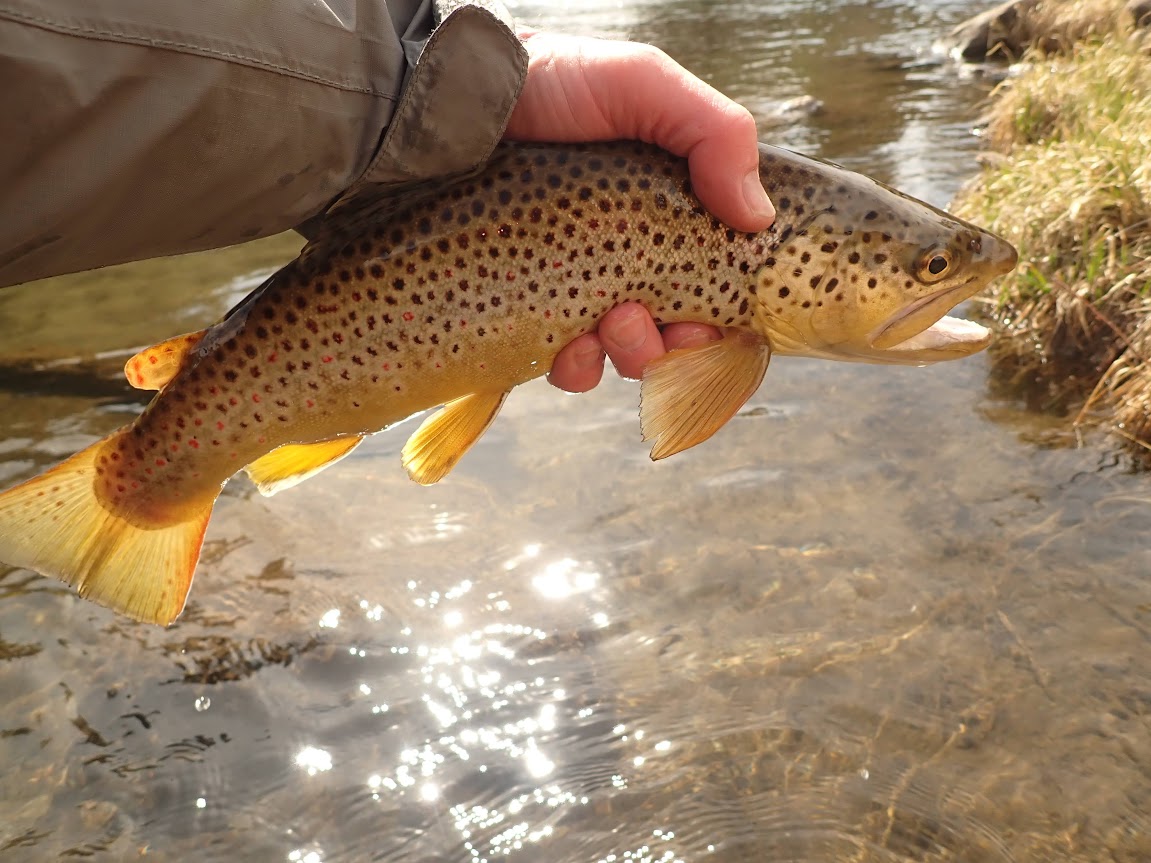 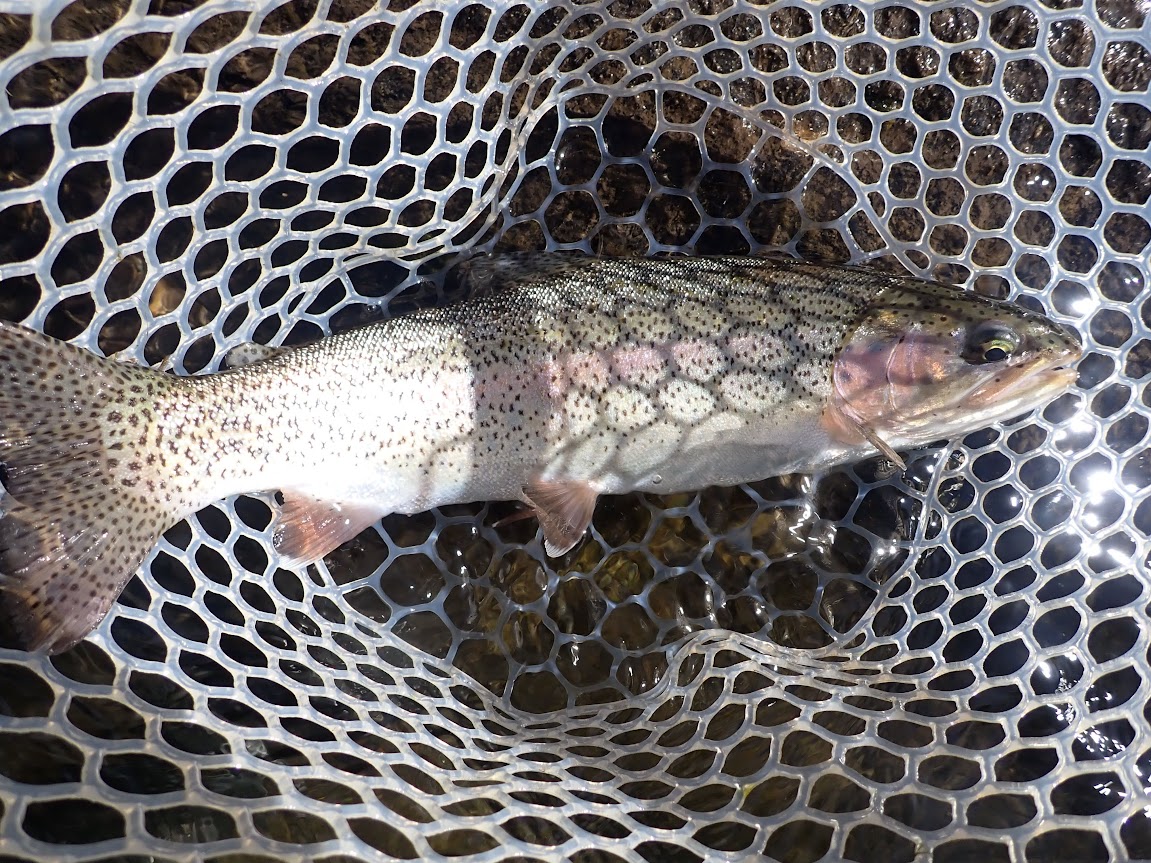 I waded into the river a few feet and launched a relatively long cast toward a feeding lane near the opposite shoreline. I could see the silhouette of the feeder, and on the fifth drift, much to my amazement, the fish tipped up and sipped my CDC wing blue winged olive. I struck quickly and battled a fifteen inch brown trout to my net. I used my curled fingers to complete the wing drying process and once again placed a cast above a sighted fish, and again my target elevated and sipped in the fraud. This cycle repeated itself six times, before I eventually crossed the river and ended my day. What an ending! The last six trout of the day from the shallow tail area were the largest and hardest fighters. A chunky fourteen inch rainbow was among the six as well as two fifteen inch browns and three thirteen inch brown trout. Even now, a day later, I am in awe of my last hour of fishing. 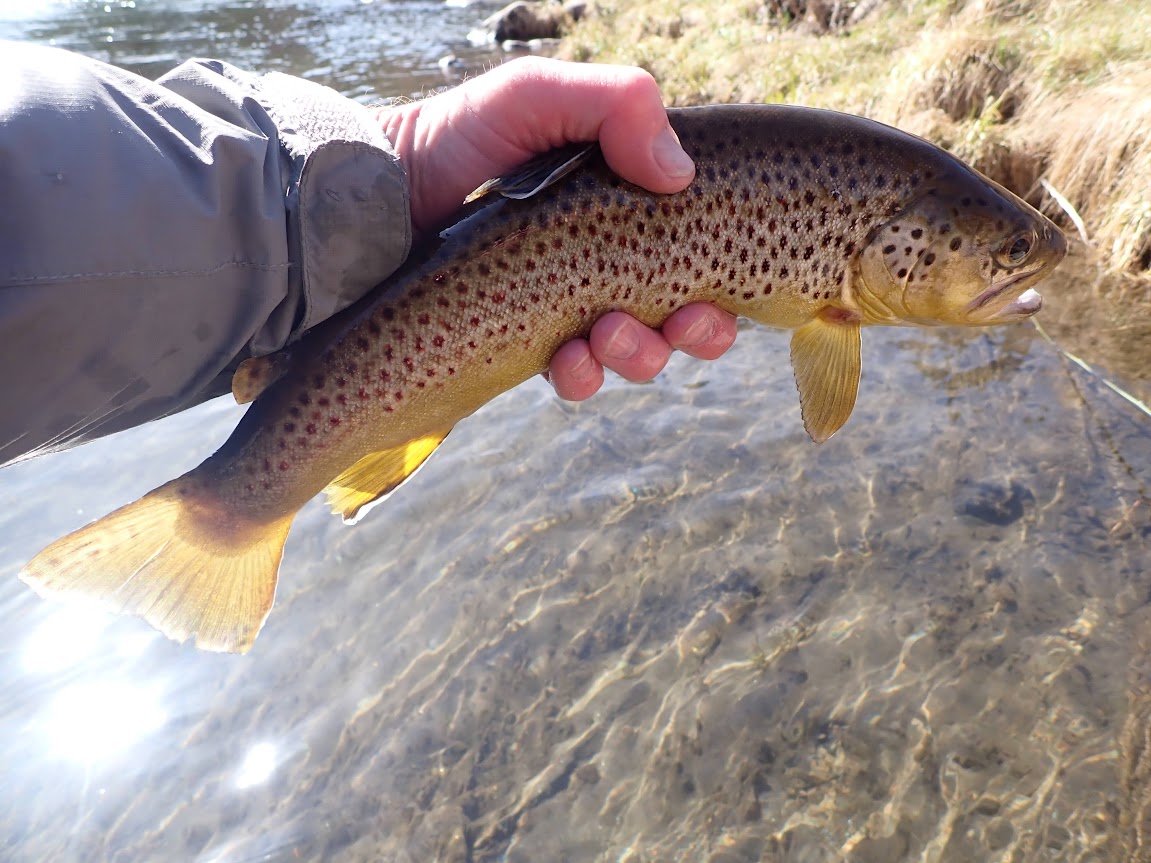 Wednesday was easily my best day of fly fishing in 2022. Twenty-five landed fish in 5.5 hours of fishing represents a better than average catch rate, and the surge of wild beauties in the last hour was icing on the cake. If one were to ask me to describe a perfect blue winged olive day, Wednesday, April 27 would be my model. Twenty-three of my catch sipped BWO dry fly imitations. and this made the day even more gratifying. The most challenging period occurred during the prelude to the storm, when mayflies appeared in blizzard quantities. During this time my ratio of casts to conversions was very high, so I still need to find a solution. Much of this frustration stems from the sheer number of naturals compared to my solitary offering, but I also think wind and motion are a factor. My fly dead drifts, while the surrounding naturals flutter and bounce and clumsily attempt to get airborne. I continue to believe that some size 20 or 22 flies with conventional hackles around the hook shank might portray motion better than my slender no hackles. Stay tuned, as I continue to unravel the mysteries of the BWO hatch.