Dry flies and spring weather were in my plans for Tuesday, April 19, 2022. Was I able to achieve my goal? Stay tuned.

After a pleasant day of fly fishing on the Big Thompson River on Monday, I decided to undertake my first back to back of the 2022 season. For my second day of fishing I was open to a longer drive to either the Arkansas River or South Platte River, as I desired a shot at larger fish than the modest fish that occupied my net during recent trips to Clear Creek and the Big Thompson. As has been the case this spring, my decision hinged largely on weather; and, more specifically, the wind. The projected wind velocities for Lake George were in the low teens during the afternoon; whereas, wind speeds peaked in the upper teens on the Arkansas River near Salida. My last trip to Eleven Mile Canyon on April 8 was a disappointment with only one fish landed, but I convinced myself that warmer temperatures and the chance for some cloud cover translated to a higher probability of a stronger blue winged olive hatch. Would the anticipated hatch develop? One again, read on. This trip was also a solo venture, and this provided the latitude to choose my favorite haunts rather than compromising with the leanings of a fly fishing partner.

I managed to arrive at a wide pullout in the middle section of the special regulation water by 10:30AM, and this enabled me to position myself next to some nice pocket water in ready mode by 11:00AM. I wore a long sleeved thermal undershirt and my light down coat to start, and I never shed layers, although I was a bit warm several times, when the sun persisted for an extended time period. My Sage One five weight was the weapon of choice to combat the likelihood of high winds, and in case I tangled with a larger than average trout. 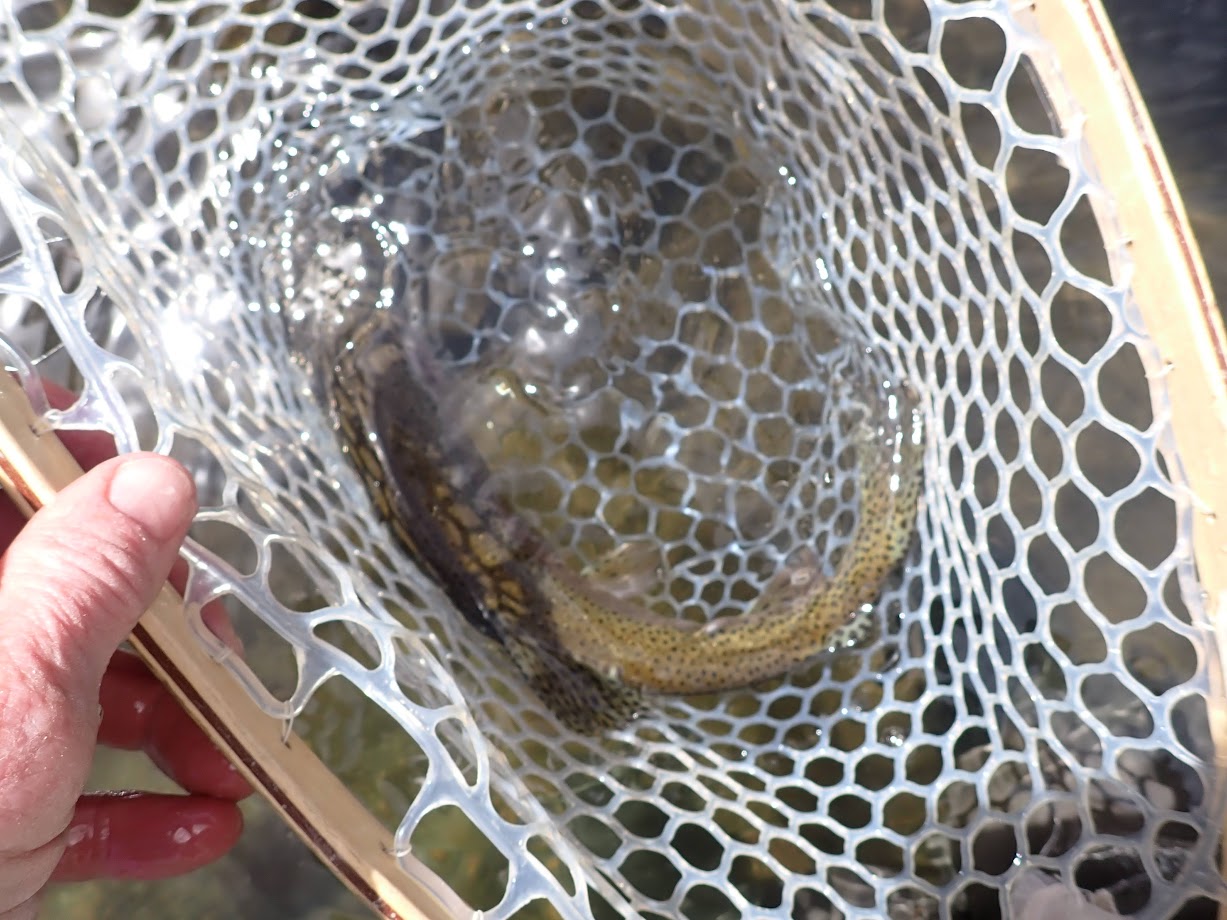 Between 11AM and 1PM I prospected pockets and runs at the head of pools with a nymph rig that included a New Zealand strike indicator, split shot, hares ear nymph and ultra zug bug. During the first two hours I guided two fish to my net including a fourteen inch rainbow and a thirteen inch brown trout. After an unproductive twenty minutes I replaced the ultra zug bug with an RS2 and later a sparkle wing RS2, and the rainbow nabbed the RS2, while the brown trout fell for the sparkle wing. I also experimented with a size 14 prince nymph and a beadhead black mini leech during this time. The presence of other anglers forced me to circle around three prime pools, as I made my way up the river. 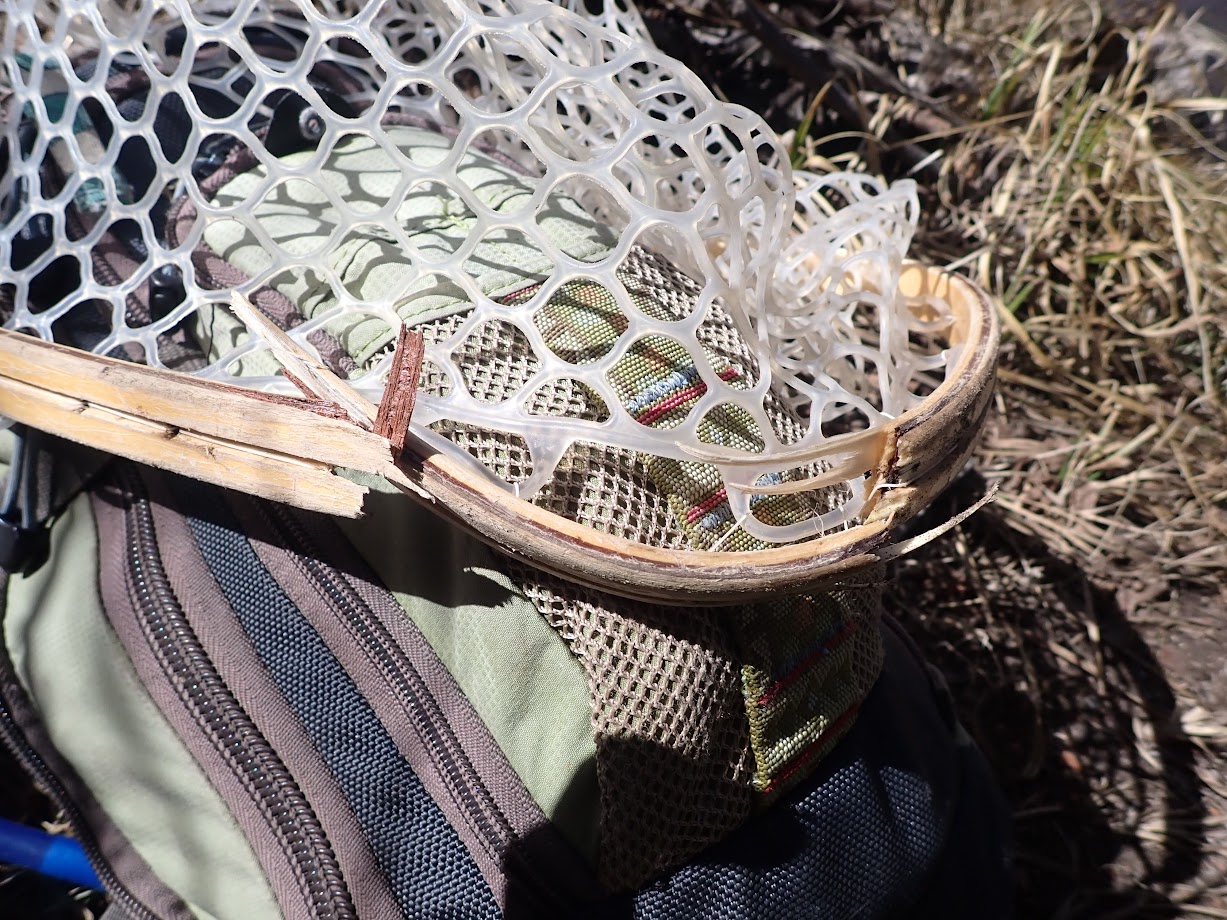 Not Sure How or When This Happened

By 1PM I advanced beyond the popular bend pool that I named Steve’s pool after my friend Steve Supple. I covered the right braid around a small narrow island, and I was drifting my nymphs through a deep pocket to no avail, when a spin fisherman twenty yards above me on the left bank signaled that I should move to his location. I gave him a thumbs up, and after he ascended the steep bank to the road, I cautiously waded to a spot in the middle of the river directly across from where he motioned me. My stealth was rewarded, as I observed numerous rising trout in a long section of slow moving smooth water twenty-five feet away from my position in the middle of the river. I observed for a short while, and then I removed my nymphing paraphernalia and knotted a size 20 CDC BWO to my line. My hands were shaking from anticipation, as I struggled to remove the single split shot that would not come undone. 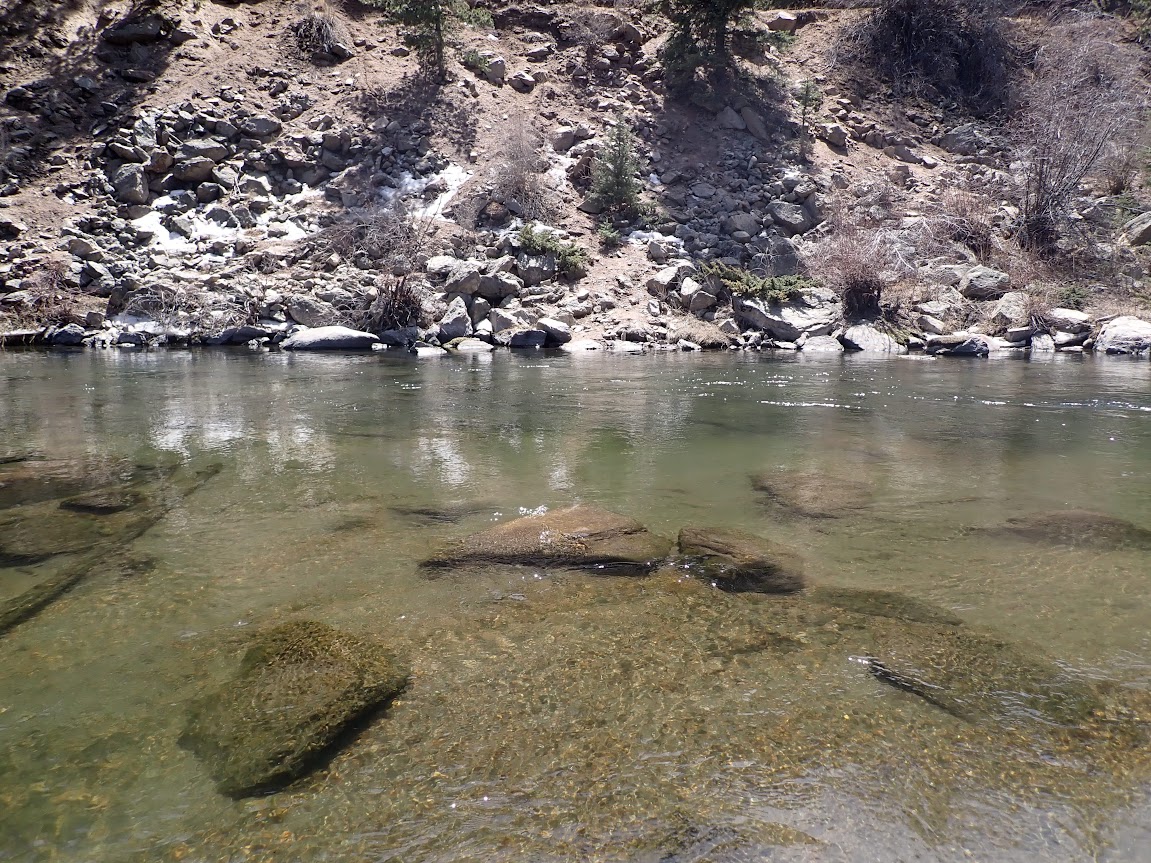 Most of My Success Was Here

Finally the small comparadun style dry fly was in place and attached to an extension of 5X leader, and I began to toss casts to the nearest portion of the pool and above three rising trout. Smack! A fifteen inch rainbow sipped in the CDC BWO with confidence on the second drift, and I managed to thwart its escape efforts and scooped it into my net. For the next two hours I remained in this spot and hooked and landed an additional six trout ranging in size from twelve to fifteen inches. I covered the length of the thirty yard long pool, and I executed a significant number of casts. Many were fruitless, but enough duped trout to make the day my best of 2022 so far. The baetis were plentiful, and it seemed that the fish fed in waves. The most intense feeding seemed to follow gusts of wind, and I surmised that the air movement knocked the tiny mayflies to the surface thus spurring easy snacks for the resident trout. 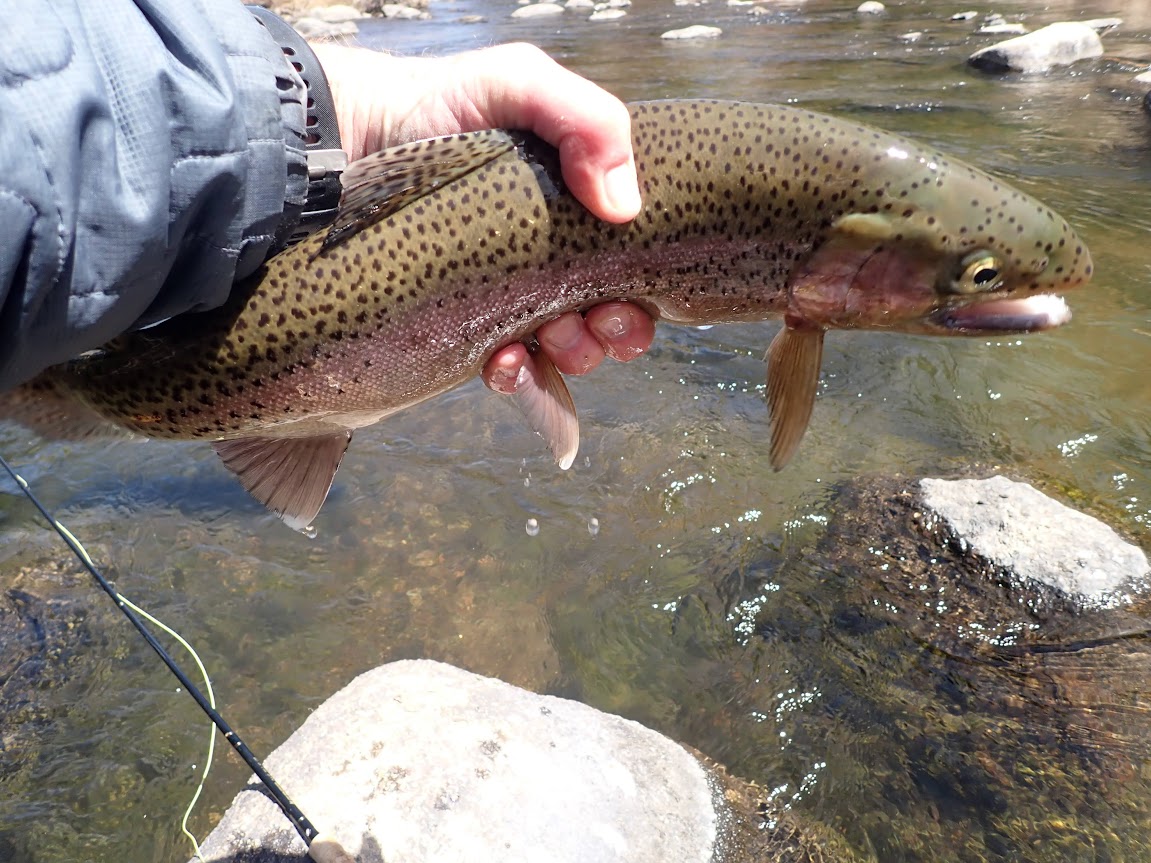 Nearly all my landed fish resulted from downstream drifts, as the flies passed over the feeding lane ahead of the leader. I repeated my routine of sopping moisture from the fly against my down coat sleeve, then dipping the fly in desiccant followed by vigorous shaking. The next step included some robust wing fluffing and then the application of a minimal amount of floatant to the body. On the few occasions when I skipped one of these steps, the fish seemed to ignore my offering! Pretty regimented, don’t you think? 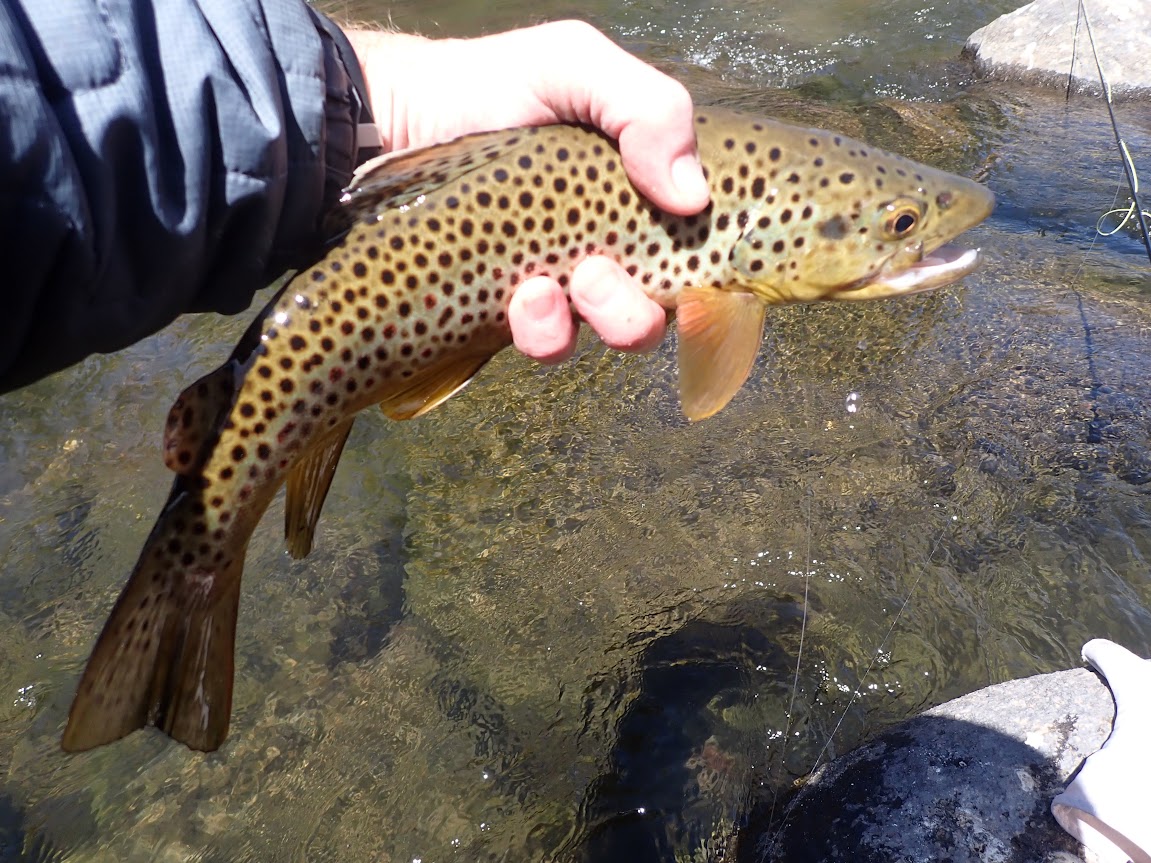 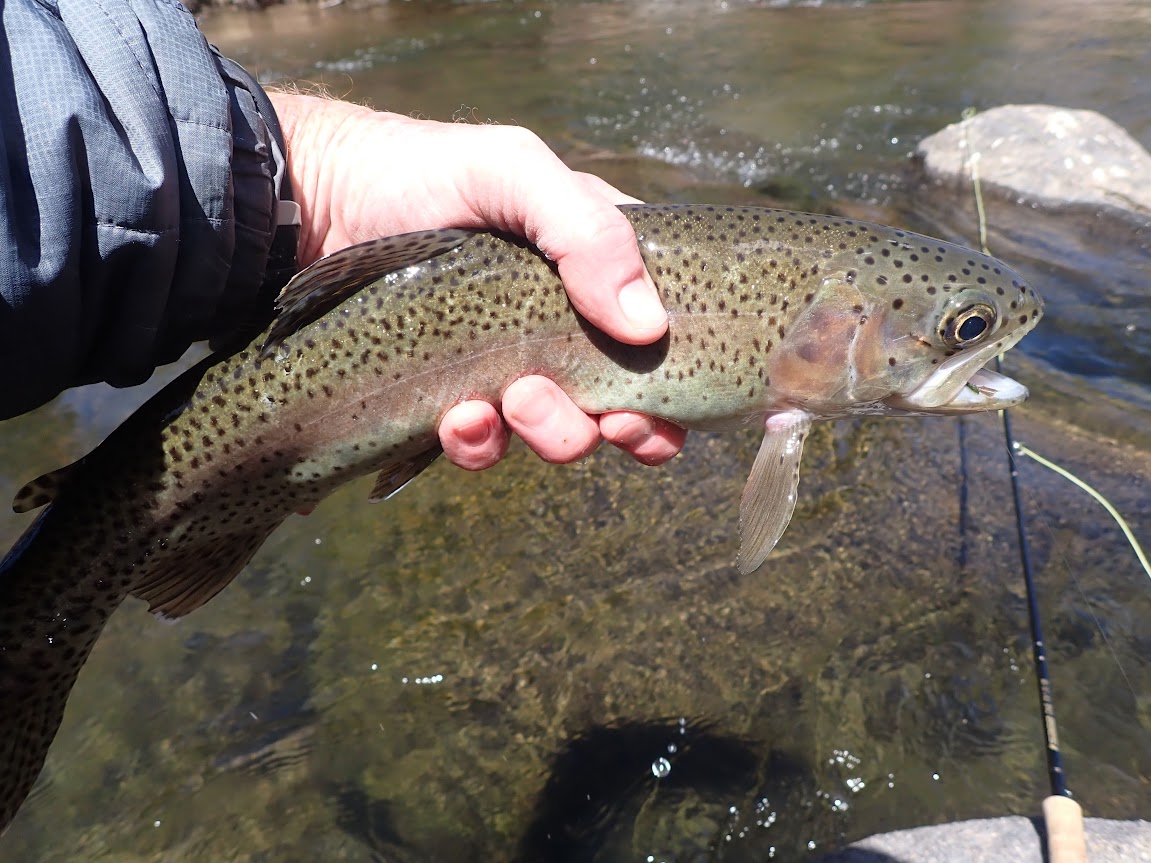 By 2:45PM the number of rises became quite sporadic, so I advanced up the river through a narrow section with a high rock wall along the east bank. I remembered a nice long smooth pool above the narrow section, but as I approached, I spotted another angler. I reversed my direction and returned to my earlier focal point once again, but the number of rising fish shrank to a few, and they ignored my offering, so I moved to the Steve pool. By now the pool was vacated, so I paused and observed for an extended amount of time hoping to spot some rises to straggling blue winged olives. Finally after three or four minutes a fish showed in some nervous water near the center of the pool, and I dropped a few casts in the vicinity. On one of the drifts I noticed a subtle splash and set the hook, and this resulted in a split second connection with a small fish. After this brief exchange with action, the pool remained devoid of signs of fish, so I hooked my fly in the guide and scrambled up the steep bank to the road. The return hike was .6 mile. 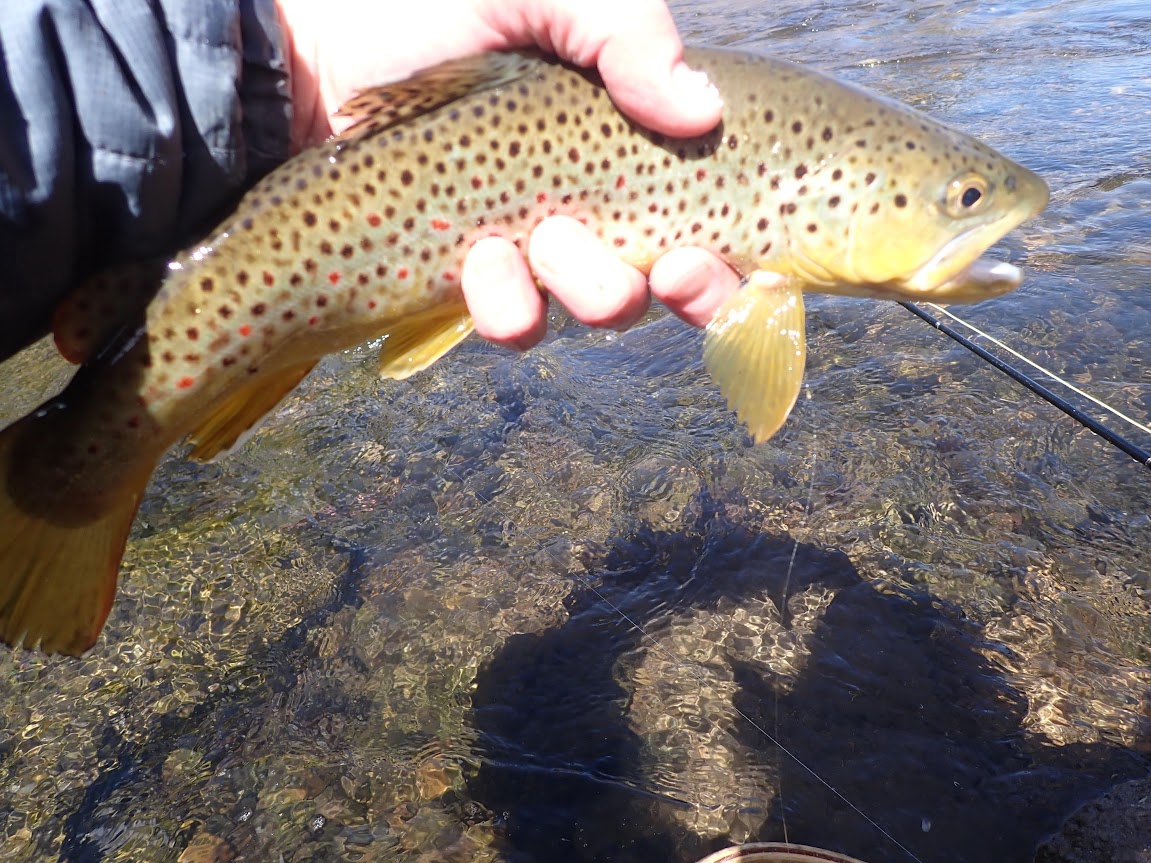 Tuesday was just what the doctor ordered. Nine fish landed with seven sipping the small blue winged olive imitation. Nearly all the fish were in the twelve to fifteen inch range, and catching  respectable trout on size 20 dry flies is always a challenge and very rewarding, if one can succeed. I have experienced more trout during a day of fishing, but the size and preference for dries is what set this day apart from the others so far. I will continue to look for overcast skies and another opportunity to make the trek to Eleven Mile Canyon before the snow melt elevates river levels.