Gorgeous weather with a high in the 60’s at Lake George motivated me to take a trip to the South Platte River in Eleven Mile Canyon on Monday, April 4. I arrived at the wide pullout above the long and placid pool in the special regulation section by 10:30AM, and after pulling on my waders and setting up my Sage One five weight, I was prepared to fish by 11:15AM. I hiked up the road for .5 mile and descended on a moderate path to the river. I was delayed by a couple false starts, when I first forgot my sun gloves and then realized that I was without my frontpack. The river was flowing clear and low at 56 CFS, and it was free of ice. A fair amount of residual snow remained along the east side of the river, as a steep canyon wall prevented the sun’s rays from penetrating for much of the day. I rigged my nymph system with a New Zealand strike indicator, split shot, sucker spawn, and sparkle wing RS2, and then I thoroughly explored some deep pockets and a nice medium sized pool, but the trout exhibited disdain for my offerings. By 11:50AM the fish count was stalled at zero, and I paused to eat my lunch, while I observed the pool. Quite a few swarms of tiny tan or gray colored midges buzzed about just above the surface, and I witnessed five or six very sporadic rises in the pool, while I munched my sandwich and crunched my carrots. 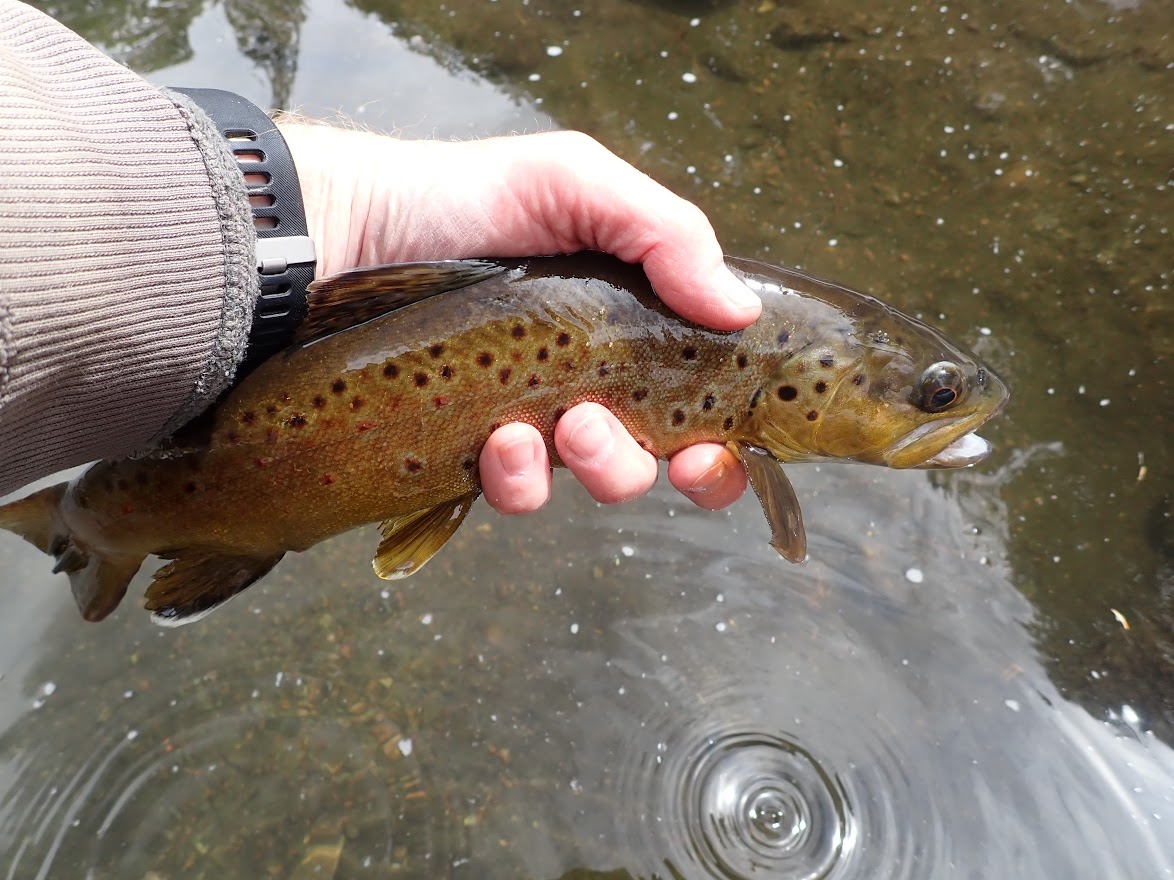 After lunch I swapped the sucker spawn for a 20 incher and replaced the sparkle wing with a classic RS2. Neither of these fish magnets created interest, so I converted to a dry/dropper with a size 8 fat Albert, beadhead hares ear nymph and sparkle wing RS2, and the RS2 produced a thirteen inch brown trout from the current seam created by a run that fed the lunch pool. I was quite pleased with my initial success, and I moved up the river with renewed optimism. In some deep pockets between the lunch pool and the next larger one, I temporarily connected with a larger fish, but it quickly figured out how to jettison my hook. I Spent Most of the Day at This Run and Pool

When I arrived at the spectacular long pool fed by two very attractive deep runs that split around an exposed boulder, I tossed the dry/dropper to the faster water. In a brief amount of time I began to notice sporadic rises, and eventually the feeding activity became more steady. This was my sign to switch to a dry fly, and I removed the dry/dropper rig and knotted a size 22 CDC blue winged olive to my line. This proved to be a prescient move, as I fished the olive CDC comparadun for the remainder of the afternoon and accumulated a total of fifteen fish. Yes, Monday afternoon temporarily satisfied my appetite for early season fly fishing action. During one half hour period, when the CDC BWO was being rudely ignored, I switched to a Klinkhammer emerger, and this fly accounted for one fish. When the Klinkhammer was also shunned, I added a six inch tippet extension and tied on a soft hackle emerger to fish in the film, and this fly also notched one fish. After a half hour of experimentation, I observed an abundant quantity of feeding fish, and they ignored my double dry offering, so I reverted to the CDC BWO. 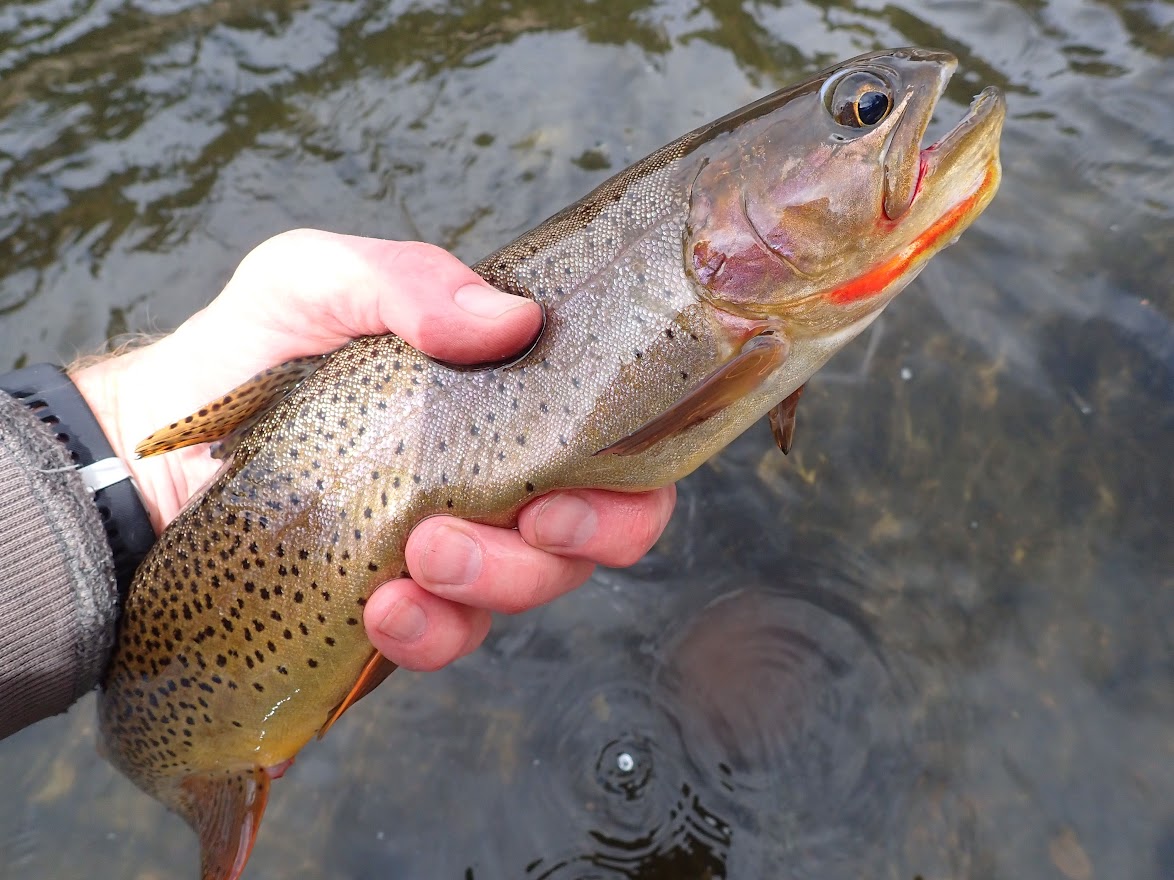 Showing Off the Slash 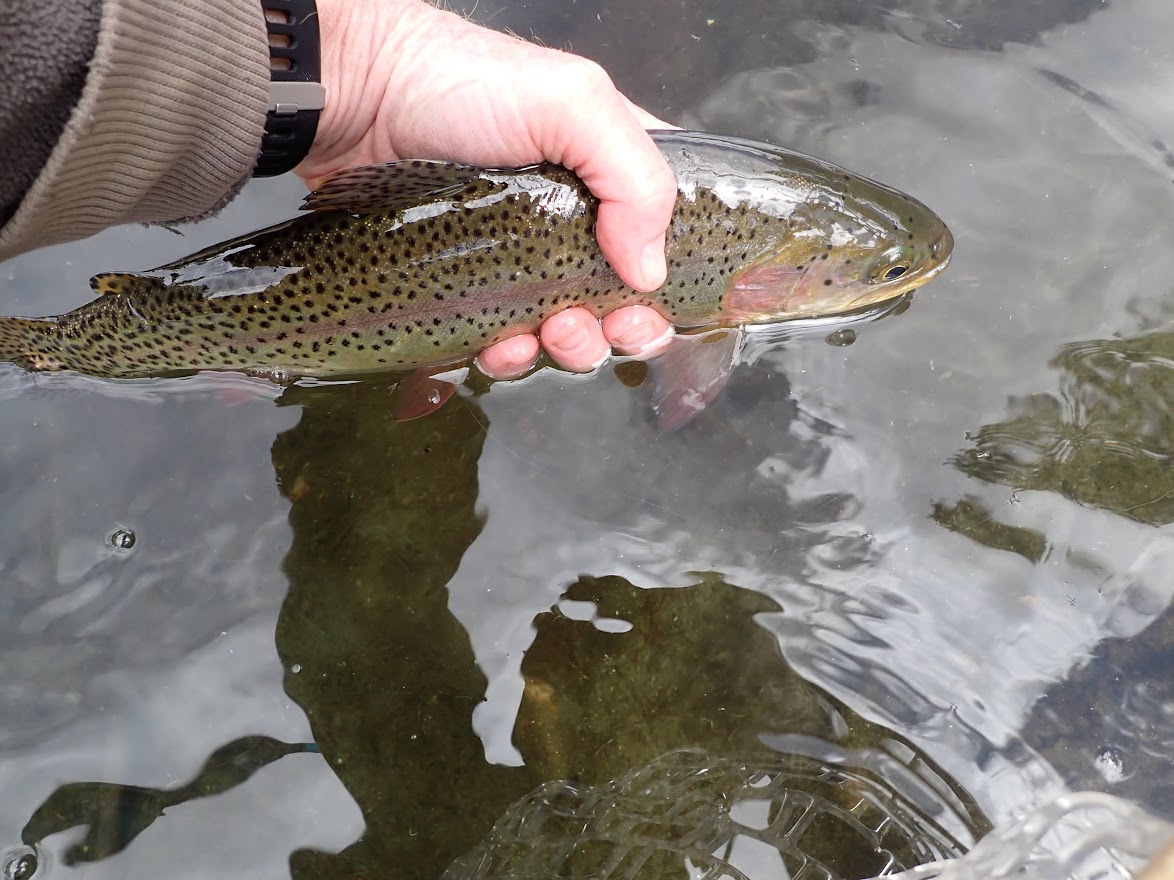 Reintroduced to the River

Initially I presented a size 20, but it was soundly rejected, so I returned to a size 22, and this enabled me to revisit success. Monday afternoon was simply a baetis feeding blitz. Large gray clouds blocked the sun’s rays for extended time periods, and this prompted wind and low light, and the blue winged olives became a favored food source for the trout. The cycle of clouds followed my brief periods of sunshine repeated often, and I took advantage of the cloud cover to net wild canyon trout. Brown trout dominated the catch; however, I managed one chunky rainbow in the fifteen inch range, and I added three brilliantly colored cutbows that featured vibrant slashes below their jaws. 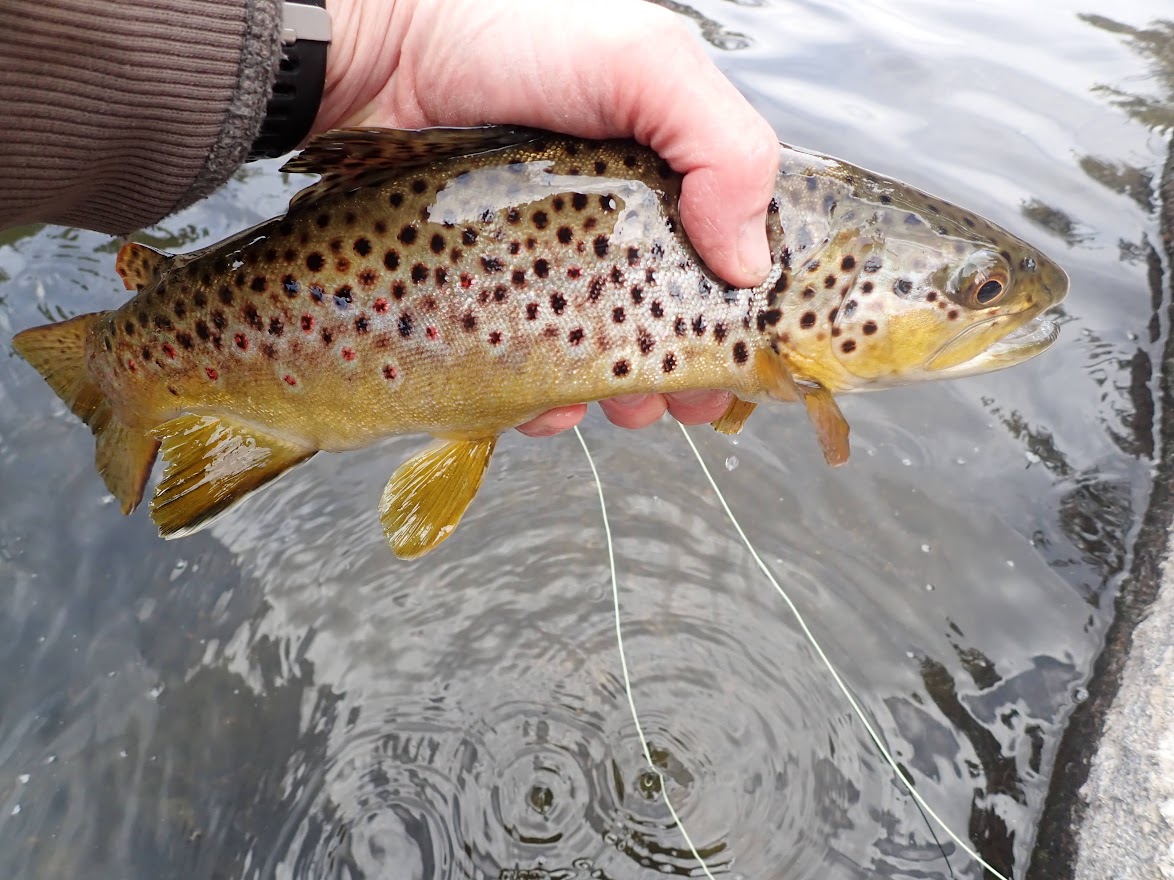 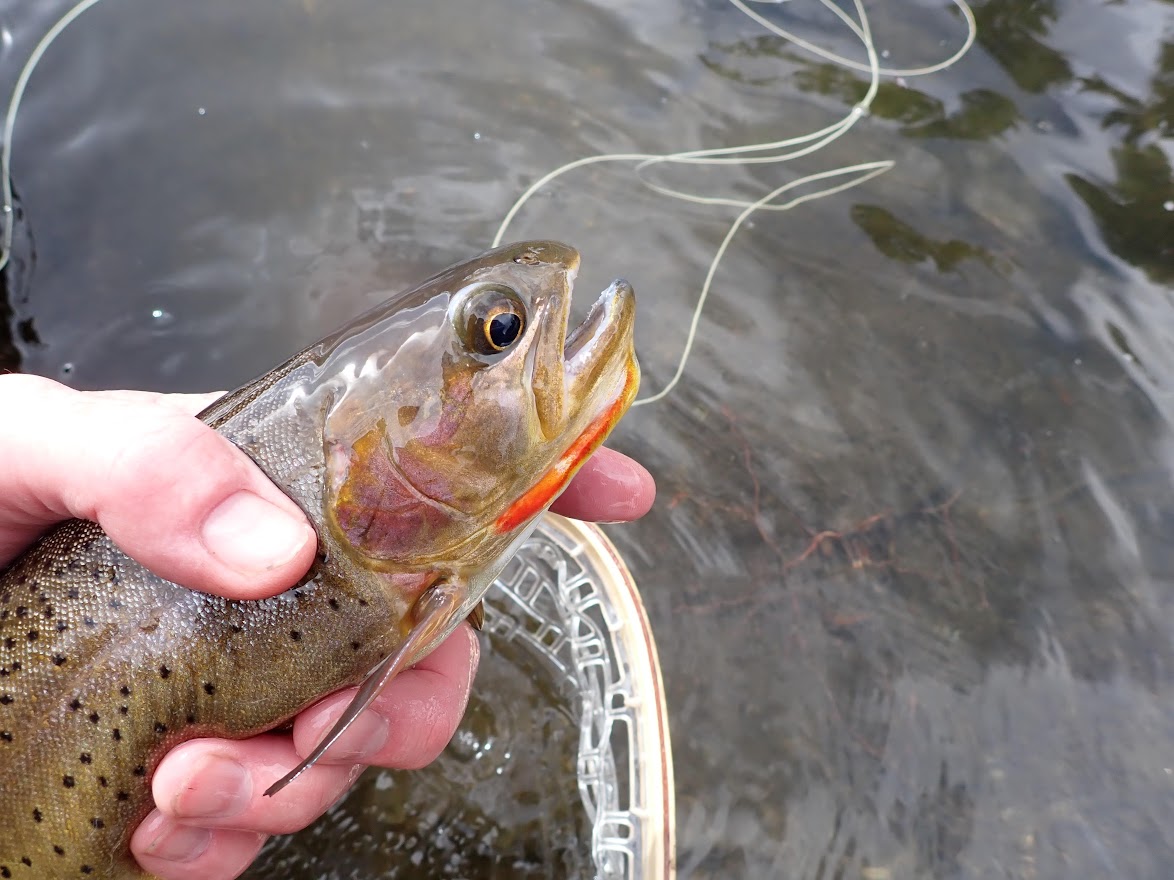 Down and across drifts yielded the most success, and on several occasions I twitched the tiny dry fly in front of a trout, and this erratic movement provoked a vicious take. I actually felt like I figured things out, but that confidence did not last long. Every take was accompanied by at least fifteen fruitless casts, so the trout were not totally convinced that my imitation was a precise copy of the naturals. Nevertheless, it worked better than the other blue winged olive fakes in my fly box, and it produced with enough frequency to keep me focused for nearly four hours in the same pool. A fifteen fish day on April 5 represented a solid success, and I look forward to a return trip to Eleven Mile Canyon. Catching fourteen out of fifteen on a dry fly was simply icing on the cake. The best of the pre-runoff fly fishing is around the corner, and Monday was a great sample of what may lie in my future.